I’M NOT A STRONG SWIMMER, nor would I consider myself particularly river savvy, hence river surfing might seem a strange choice for me. However, I am a fan of cheap thrills, and the standing wave on the Snake River (Lunch Counter rapid) just outside Jackson arguably provides the best adrenaline-to-dollar ratio of any summer activity I’ve found in the mountains. Ten bucks in gas? Risk of drowning? I’m in.

There’s a couple of ways of catching the wave. The first is the mandatory, trial-by-fire method that’s sure to get your heart racing and lungs pumping. Since the wave is on the far side of the river, you don’t have much choice other than ferrying across (unless you put in far above the rapid and eddy-out up top, but what fun is that?).

Since you’ll be paddling through the rapid, you might as well try to catch it. For those (read: me) with little river and swimming confidence, paddling into a wave-train, sans PFD, is pretty counter-intuitive. The water temperature — somewhere in the 40s — is quickly forgotten as soon as you’re in the current and accelerating toward the whitewater. The goal is to snag the large foam pile on river right of the wave pocket.

In theory, if you can catch the foam pile you’ll be pushed onto the face of the wave. Otherwise, you get pulled downstream through the rapids, (hopefully) into the eddy, and back to the bank where option number two starts.

The second, and much more common, option involves jumping from a rock and catching a lateral seam that pushes the surfer into the pocket. Although this option seems more straightforward, it still takes a while to master the jump-paddle-stand succession (not to mention overcoming the fear of being sucked into the funky hydraulics that are feet away from where one jumps).

The real kicker, and perhaps the hardest thing to get over, is that regardless of the approach and how long a ride one gets, there’s no avoiding swimming the rapid. How far one gets swept downstream is just a matter of positioning, paddling, and luck.

Many surfers may balk at this phenomenon that us land-locked surfers drool over. However, it’s just enough adrenaline, paddling, and glide to quench a thirst that would otherwise require an airplane or a solid day in a car. Sure, it’s not Teahupoo, but the crowds are small, the waves consistent, and, on the right day, you might even catch some girls in bikinis. 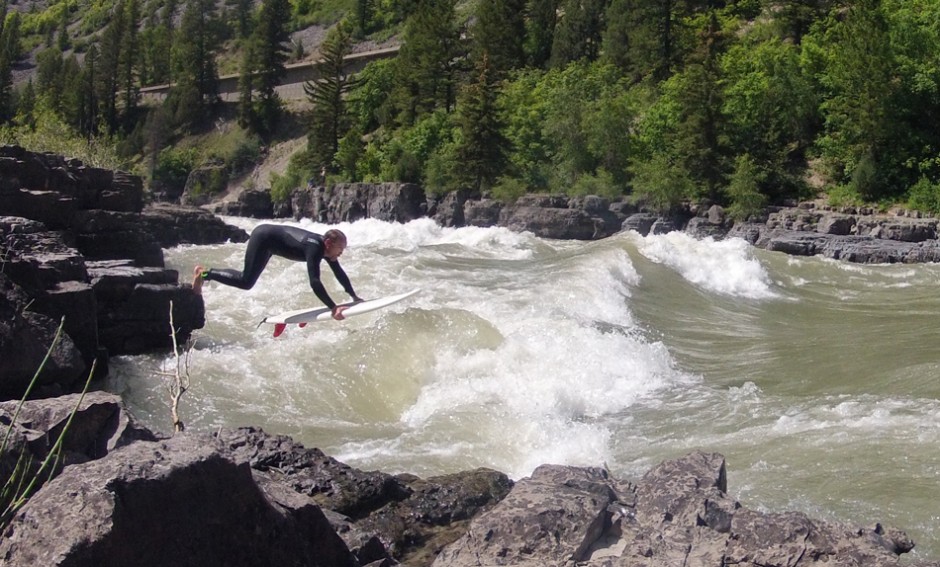 A fundamental truth in surfing and paddling is that "wherever you look, that's where you'll go." Don't look down at the hydraulics unless you want to end up getting pounded there. Instead look upstream into the seam and launch out there. 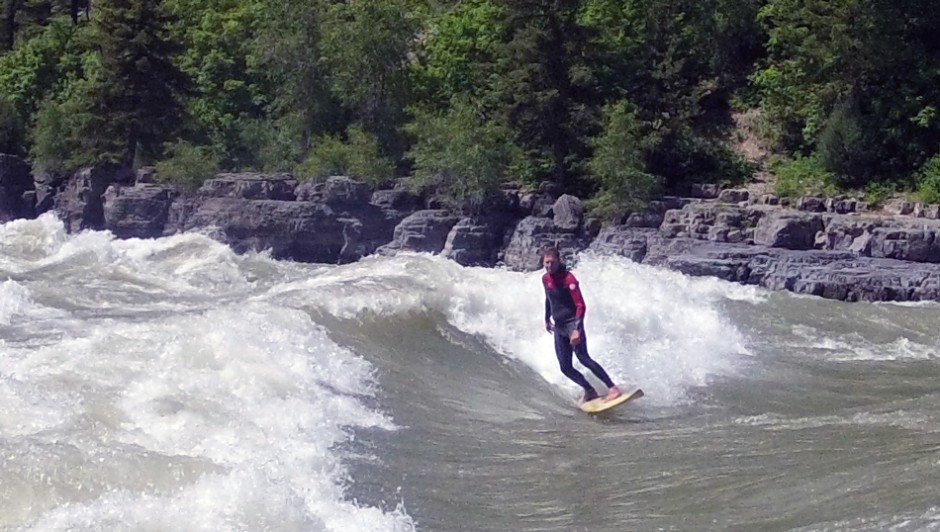 Once you're on the bowl, it's all good. 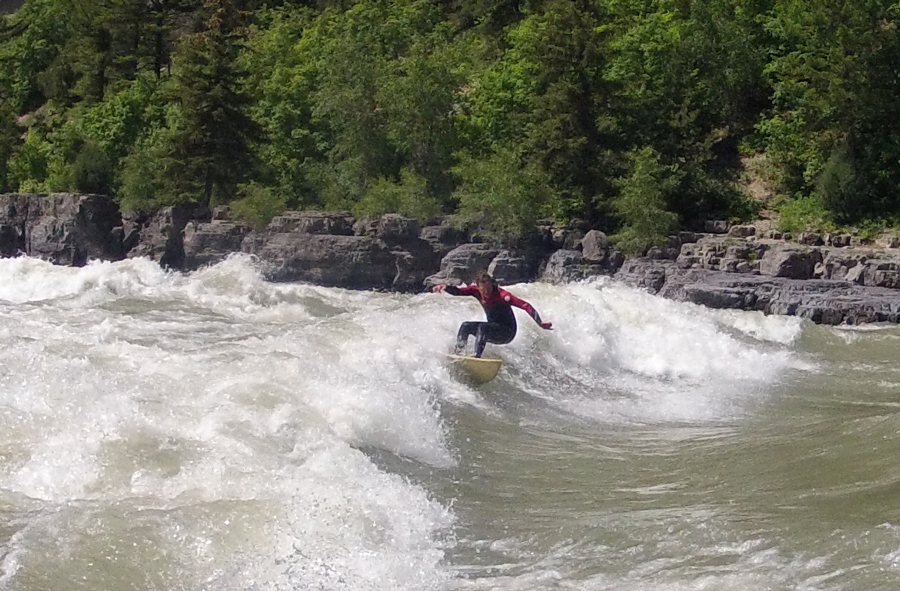 Skilled surfers can carve here for several minute-long (or until your legs burn up) rides. 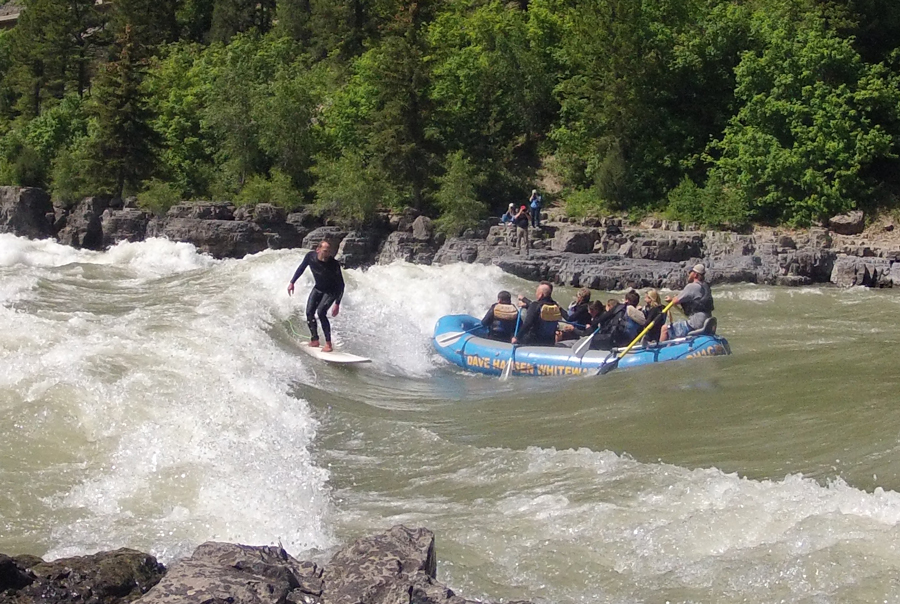 As you're out there on the wave, all kinds of rafts and boats will come through the rapids. Downstream crafts always have the right of way, which can add an extra challenge for staying on the wave. 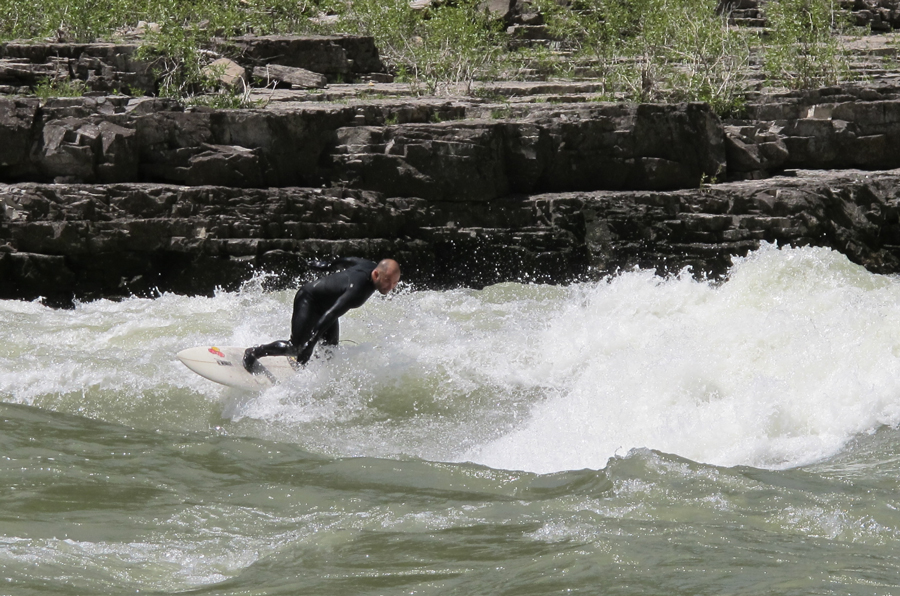 Eyeing up the foam ball

This is the foam pile you want to hit if you're trying to catch the wave by ferrying across from upstream. 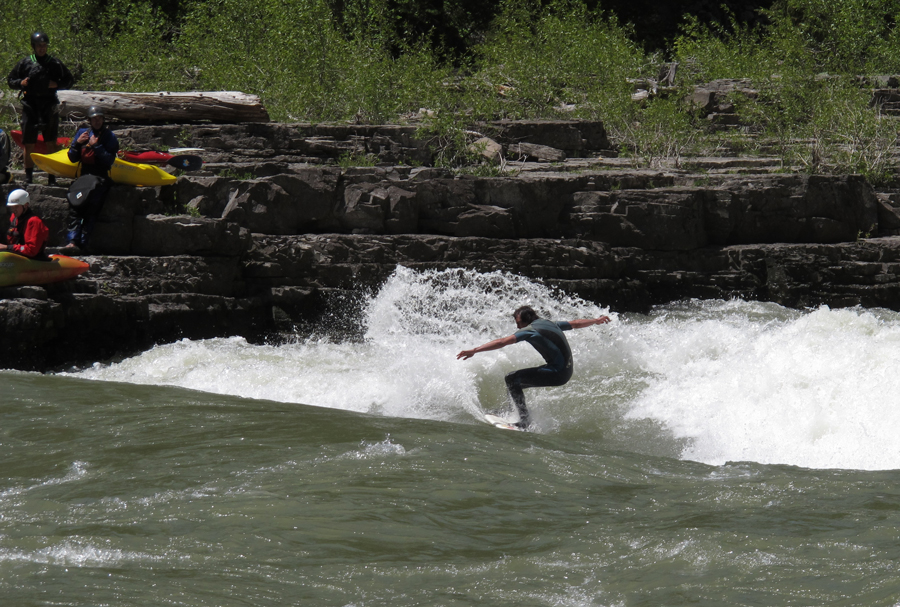 For a place that's landlocked by at least a thousand miles, you can make solid maneuvers here.