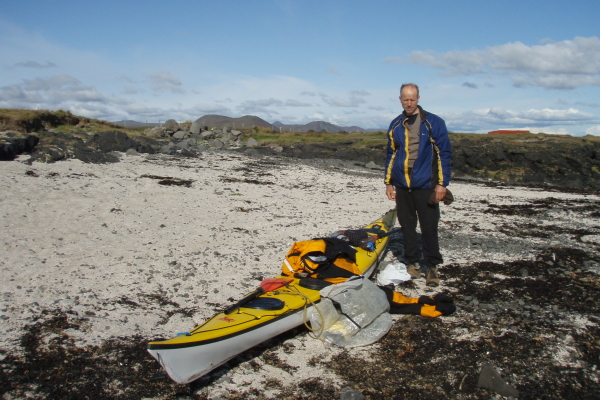 After a record-setting voyage, Icelandic kayaker Gisli Fridgeirsson talks to Matador about his two months of paddling in the midnight sun.

On August 3, Gisli H. Fridgeirsson became the first Icelander to circle his native country in a kayak, landing at Cape Geldinganes in Reykjavík after a two-month solo journey.

Accompanied at different times by whales, seals and seabirds, Fridgeirsson kayaked along the northern shore mostly at night, taking advantage of the generally light evenings. In an interview with Icelandic newspaper Fréttabladid, Fridgeirsson described his adventure as a personal journey.

“It was both demanding and exciting, and I was given the opportunity to get to know the country from the viewpoint of those who rowed for fishing in years past,” he said. “I’m very satisfied and feel as if my achievement adds a certain value to life.”

What do you do for a day job?

My daily job is working in a governmental office of measuring instruments. It’s very different from the outdoor adventure that a long kayak trip offers.

What made you take on this mission?

My own country offers a lot of freedom when traveling outdoors. After having paddled in most weather conditions with the kayak club in Reykjavik over the last few years, the coast of Iceland became too much of a challenge [to pass up].

What were the biggest challenges once you were on your way?

The real challenge is to know how much you can take and not to pass the limits of your own capabilities. It requires good judgment and correct timing regarding wind, waves, and currents, as well as landing conditions in rocks or breaking waves. 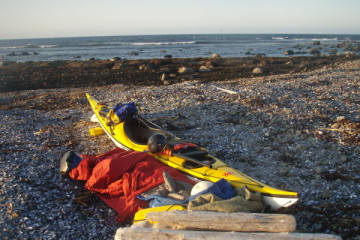 Can you talk us through a typical day or night of the trip?

It is hard to say how the daily routine was, since each day was different. An average day might have been nine hours paddling with two hours rest for coffee and meals, then five hours camping, cooking, looking at the environment, and preparing for the next day. Plus eight hours sleep.

The isolation and light summer nights must have been a special combination.

Yes, the light nights meant I could paddle around the clock. Some nights were magical, heaven and mountains upside down in the purple mirror of the ocean and no single sound, except maybe the sound of breathing whales around me when I stopped paddling to have a few minutes rest.

What did you think about during all that time alone out at sea?

What kit did you take with you?

For navigation and safety, I used laminated maps, a compass, GPS, SPOT, emergency flares, lights, and some other gear. My friends knew approximately where I was, in case of unexpected problems. For camping, I used a weather resistant tent, an extra bivouac for sleeping outside when weather was “too good” to camp, and gas for cooking.

What back up plans did you have in case of emergencies, such as getting caught in bad weather or capsizing?

Capsizing is not such a problem as people think, when you’ve got the right training. It’s more the danger of a head injury if you hit rocks, or breaking your boat when a wave catches you and throws you to the shore.

Now that you’ve finished, have you been kayaking in your sleep?

It takes much energy and determination to finish those 1250 miles, and I’ve been dream-paddling every night.

I’ve been rather lazy and sleepy. I suppose two more weeks will be needed to regain my weight and get my strength back.

What did you get out of this journey? Would you do it all again?

Such a journey gives a unique insight into yourself and some kind of fulfillment and joy. I don’t think I will do anything like that again, but I should have done it many years ago.

See Iceland for yourself with Matador community member jesspaul14’s blog Iceland in 4 days.

Tagged
Paddling Iceland
What did you think of this story?
Meh
Good
Awesome