I’ve pulled off the dirt road to rest; the air is getting thin here. Popocatépepetl is getting closer.
Two-wheeling it west from Puebla, the rising sun warmed my back and dramatically illuminated the snow-frosted twin volcanoes of Popocatépetl and Iztaccíhuatl, A plume of white smoke emerged lazily from Popocatépetl’s crater.

When Spanish Conquistador Hernán Cortés invaded Cholula in the sixteenth century, he reportedly boasted he would build 365 churches there – one for every day of the year. Although he didn’t quite reach that goal, he and his men brutally massacred thousands of Aztecs, destroyed their temples, and constructed a whole bunch of Catholic churches, including the imposing Iglesia de Nuestra Señora de los Remedios atop the destroyed pyramid.

Topping off the Kawasaki’s gas tank at a Pemex station outside Cholula, I encountered a trio of friendly locals in a battered pickup truck, who offered to lead me to Puebla State Road 416, a rural blacktop that would take me into the mountains. As I continued west, the temperature dropped as I gained altitude. Riding through small towns like Nealtican and San Nicolas de los Ranchos, a mixture of dust and smoke from grilling food scented the air.

At Xalitzintla, a tiny farming community about 30 miles west of Cholula, the pavement ended and the ascent to Paso de Cortés began in earnest. At an elevation of nearly 11,500 feet, Paso de Cortés is as close as you can legally get to Popocatépetl. From there, a 12-kilometer road that would take you right to the foot of Popocatépetl is gated and closed, according to the hand-lettered signs, “due to volcanic activity.”

I’ve got news for you. Were Popocatépetl to experience a major eruption, you’d be toast, even at Paso de Cortés, 12 kilometers away.

From Xalitzintla, sandy packed soil transformed to loose gravel and sharp climbing turns punctuated by protruding rocks. I navigated by standing on the Kawasaki’s footpegs, amazed that any four-wheeled vehicles were able to make the ascent. Farther along, I pulled over to drink some water and adjust to the altitude.

An hour an a half in, I’d covered just 10 miles of dirt trail, but it had taken me to Paso de Cortés and Parque Nacional Izta-Popo. Popocatépetl and Iztaccíuatl are Mexico’s second- and third-tallest mountains, and are commonly referred to as Popo and Izta, nicknames arguably easier to pronounce.

I rode around the small traffic circle, parked the bike, and walked to the visitor center. A large Mexican flag snapped in the wind. Visitors who’d arrived by tour bus – from the , paved side of the mountain – strolled and took pictures, and vendors hawked food and souvenirs.

I’d take the long way back to Puebla, riding down the mountain’s western slope – the paved road. It would be twisty and exciting, too, but nothing like the technical climb up a dirt trail nearly to the base of a simmering volcano. 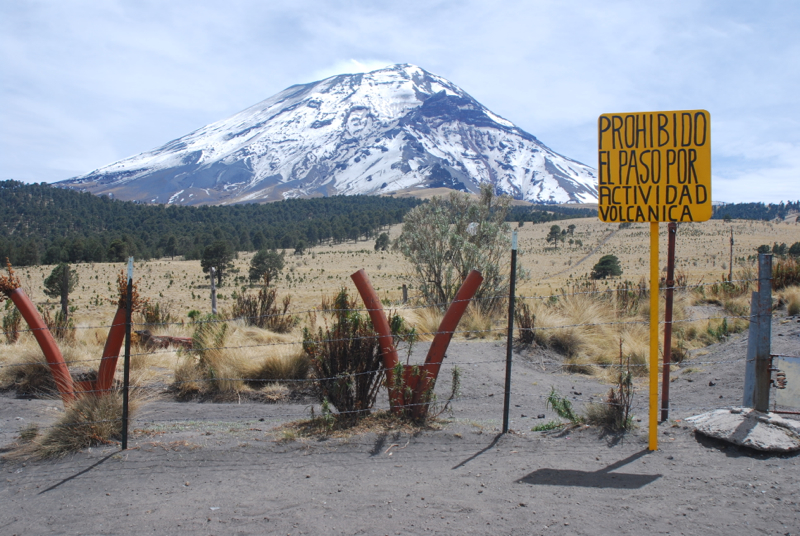 This is the end of the road, at Paso de Cortés. Popocatépetl sits 12 kilometers away, down a closed and gated road, but even from here, you feel you're close enough to touch the active volcano. 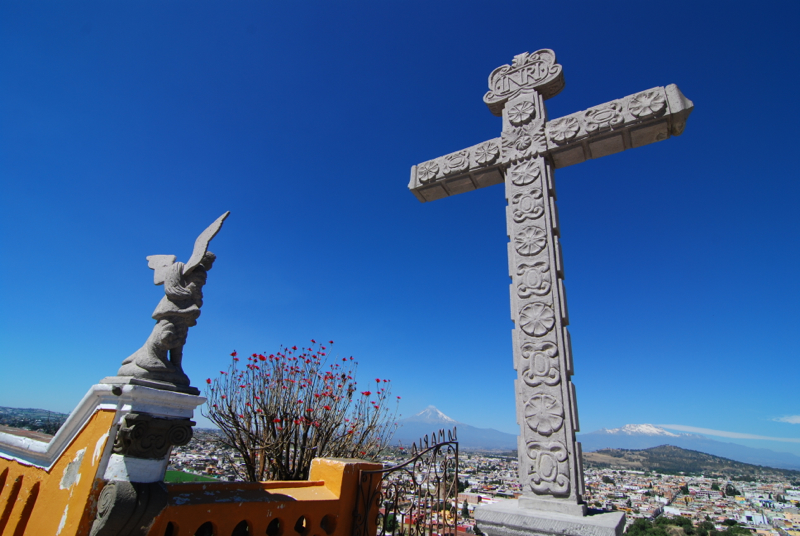 Popocatépetl (left) and Iztaccíhuatl (right) loom about 30 miles from Cholula, seen here from the patio outside Iglesia de Nuestra Señora de los Remedios, a Catholic church built atop the ruins of an Aztec pyramid. 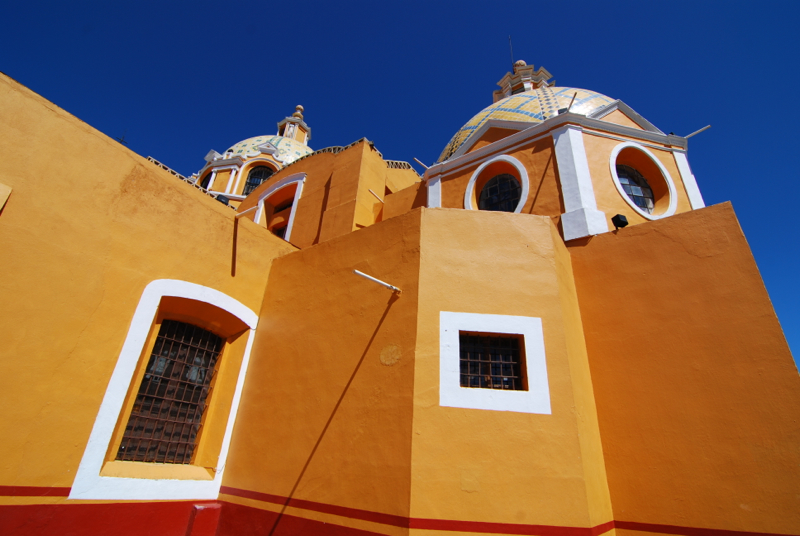 La Iglesia de Nuestra Señora de los Remedios was built in the sixteenth century after the Spanish Conquest. Although it appears to sit on a hill, it was actually constructed atop the ruins of the largest pyramid in the world, the Great Pyramid of Cholula. 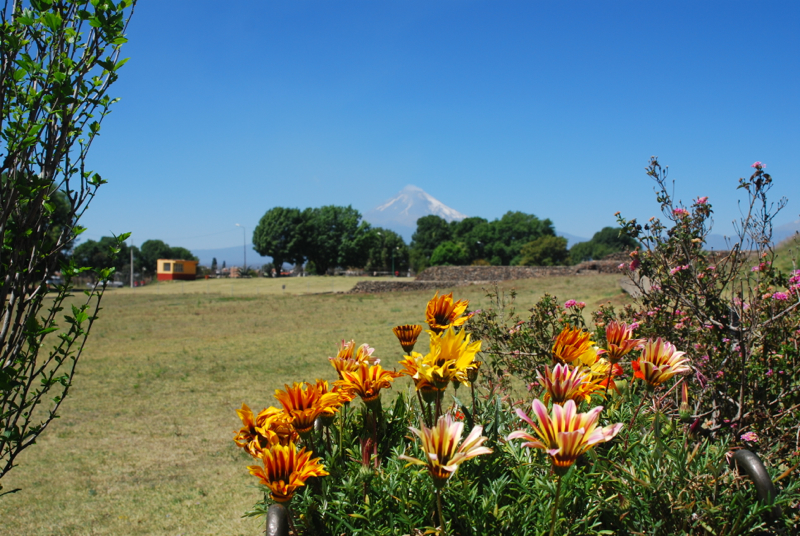 Popocatépetl looms in the distance, seen from a field in Cholula. 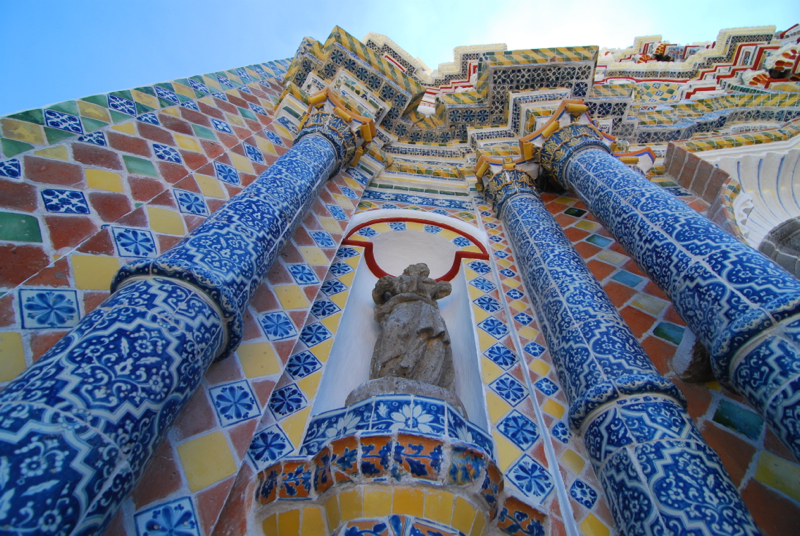 Exterior detail from another of Cholula's magnificent churches, built in the sixteenth century after the invasion of Hernán Cortés. 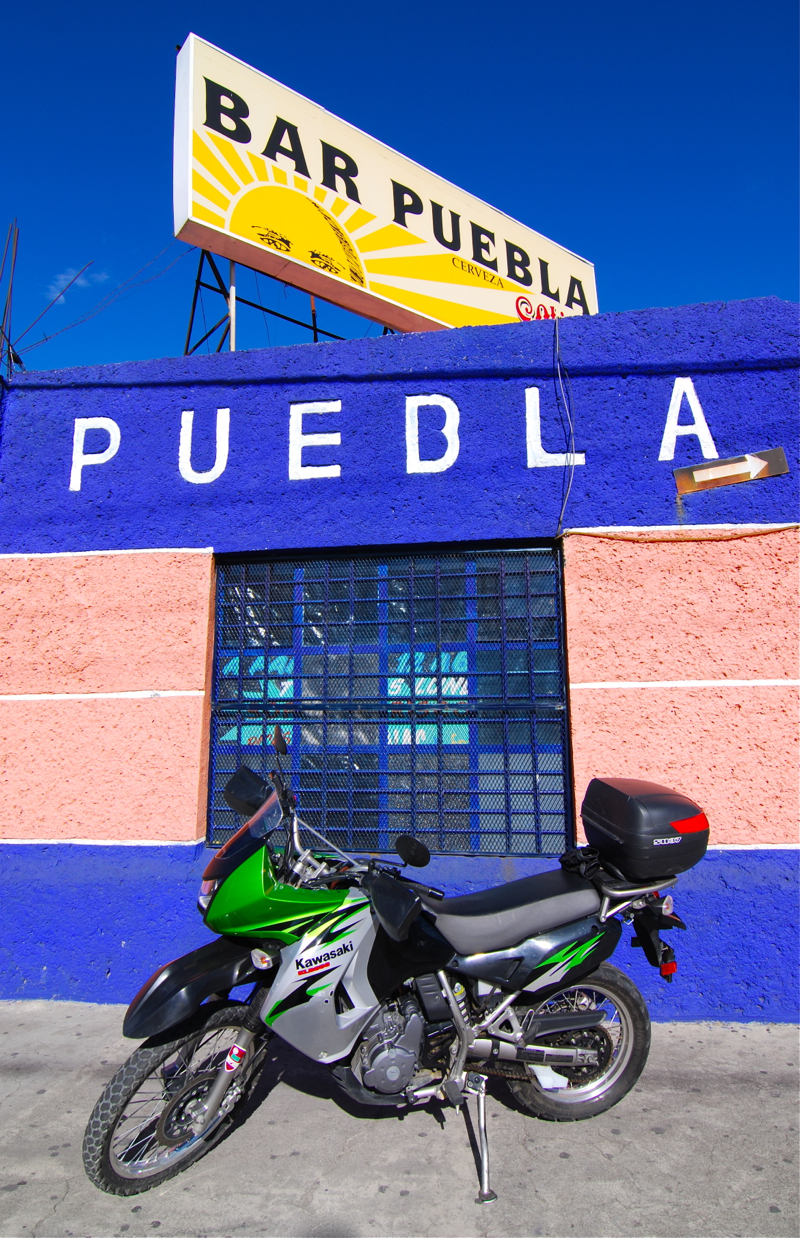 Near the beginning of my journey, in Puebla, Mexico. I couldn't resist the bright colors and contrasts in this scene. To me, colors in Mexico are more vivid than anywhere else. 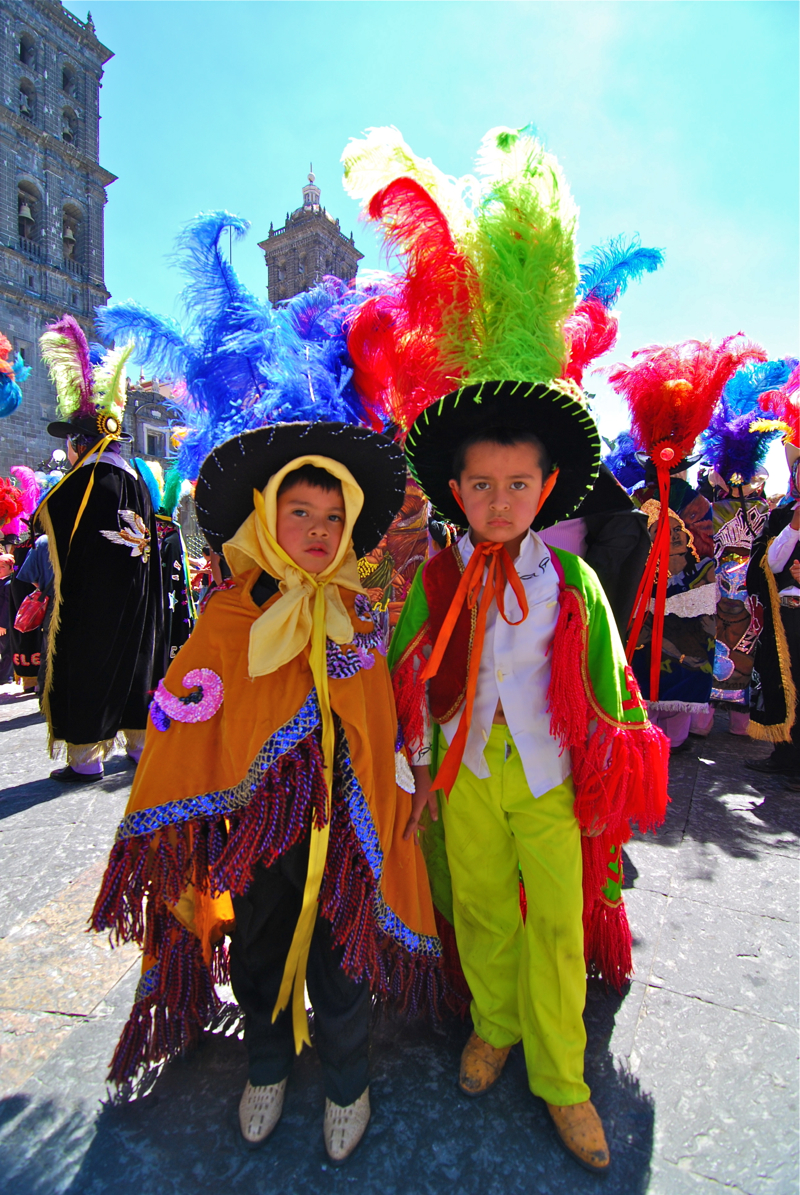 Costumed children waiting to perform in an outdoor festival on Puebla's zócalo, or town square. 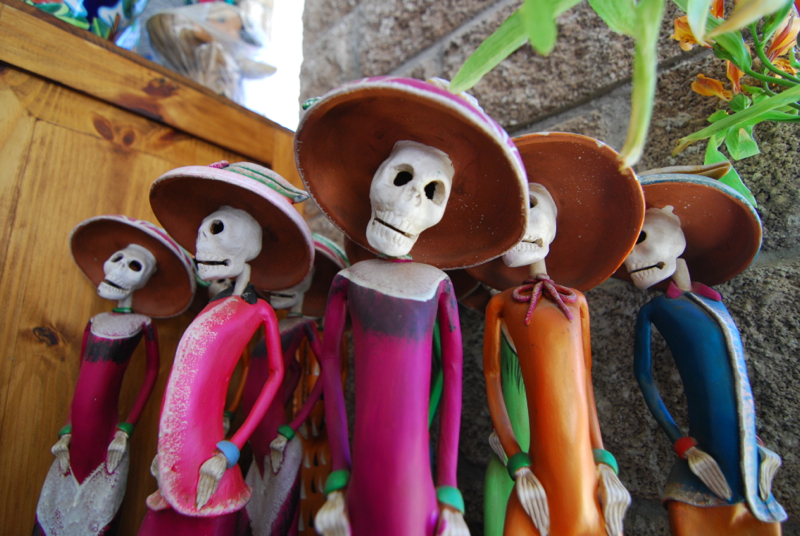 Skeletons and skulls are a recurring theme in Mexican art, such as these brightly dressed examples in a Cholula shop. 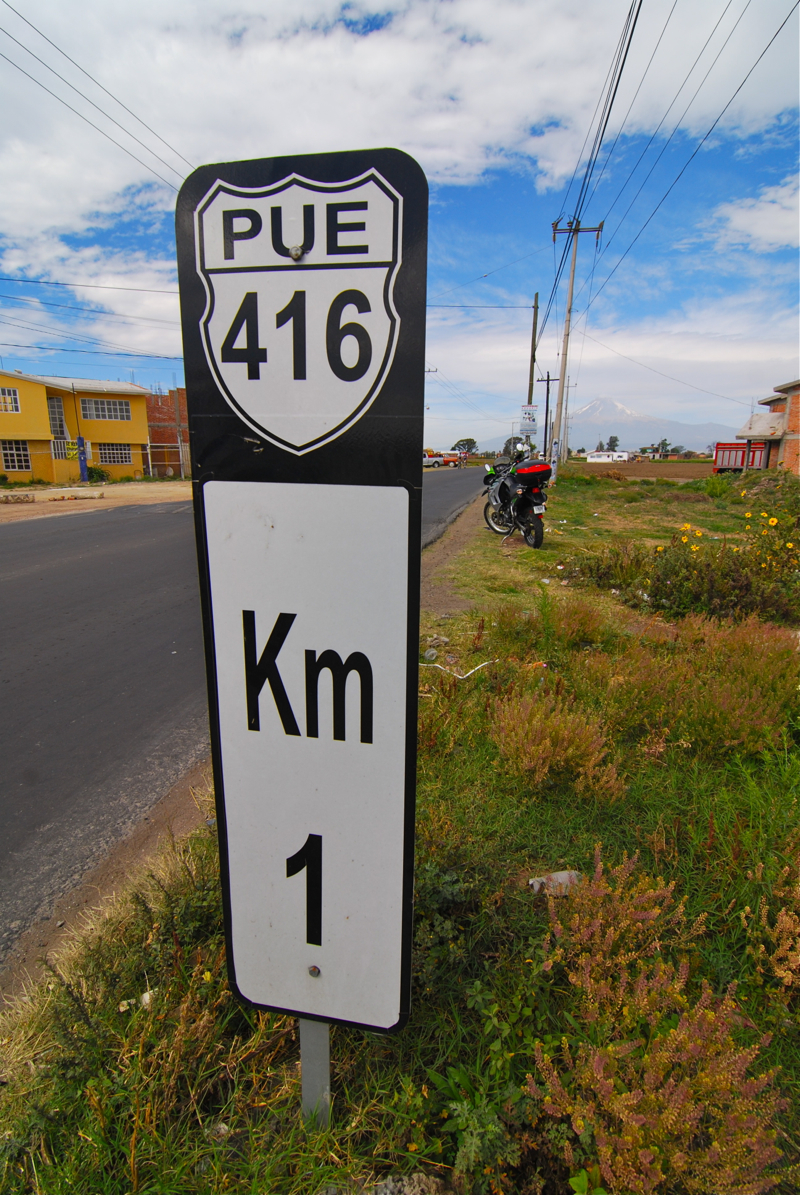 Kilometer 1 of Puebla state road 416, which leads into the mountains and Paso de Cortés. 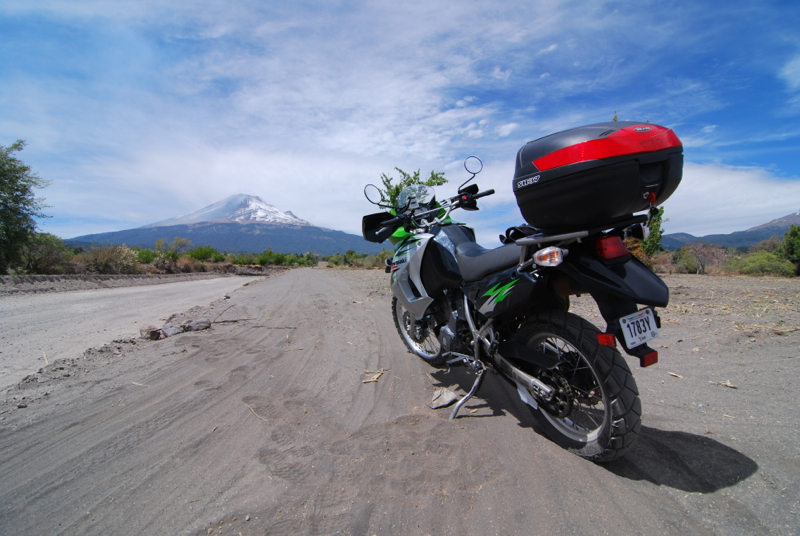 The pavement ends and the dirt begins. Not too rough here, but just wait! 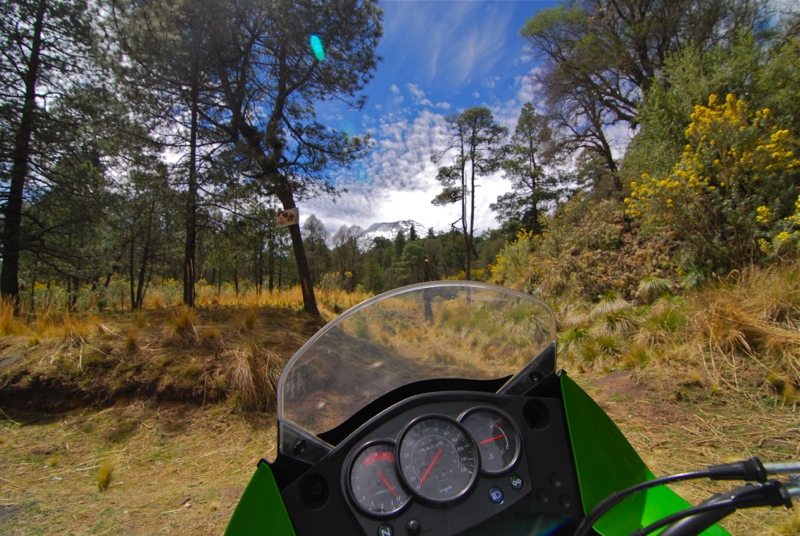 I've pulled off the dirt road to rest; the air is getting thin here. Popocatépepetl is getting closer. 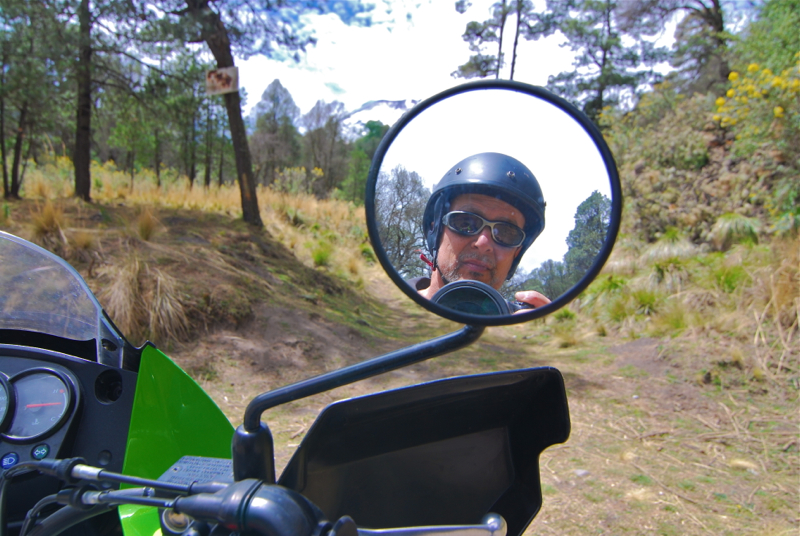 Self portrait - the Gringo and the Volcano. 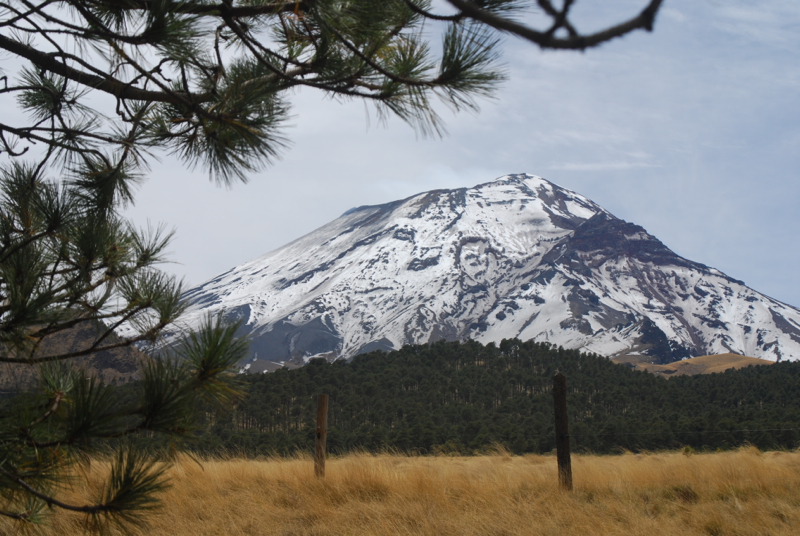 Popocatépetl from the national park. 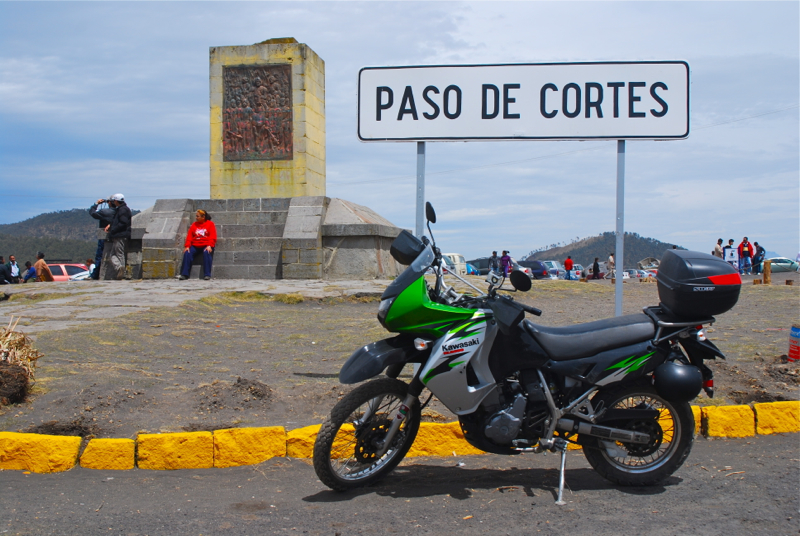 A traffic circle with a monument in the center greets you at Paso de Cortés. The steps of the monument provide a place to rest before walking to the nearby visitor center. 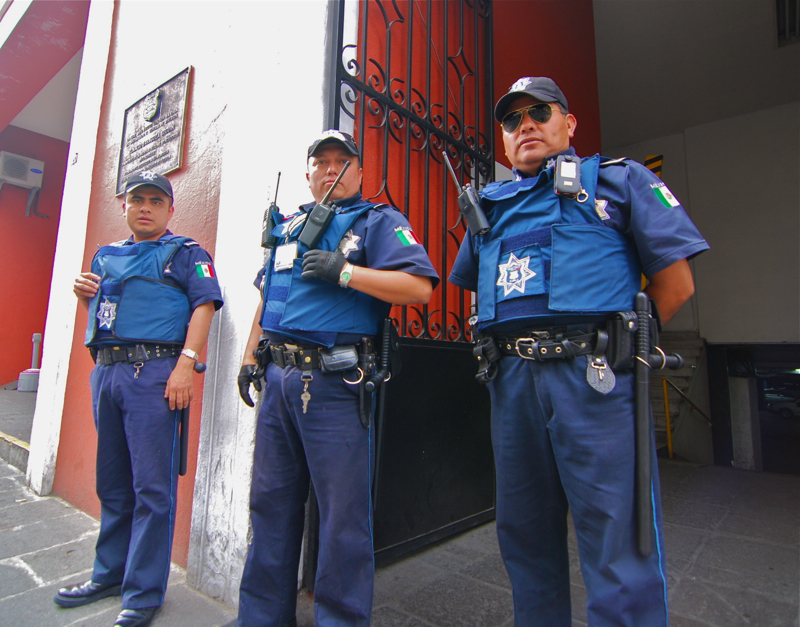 Back in Puebla, a trio of policemen keeps an eye on things. They were somewhat wary of having their picture taken, but smiled when I showed them the photo afterwards.

The Largest Pyramid in the World Isn't in Egypt. It's in Mexico.