WITH A WEEK OFF from obligations in Kathmandu, my girlfriend and I rattled our way to Pokhara by bus. The roads in this part of Nepal are like paper cuts on the lip of a cliff overlooking a distant riverbed. Pokhara is a 5-7 hour drive, depending on traffic (and your driver’s willingness to put terror and efficiency ahead of the lives of a busload of people).

After spending a chilled couple of days by the lake in Pokhara, we went on a four-day trek towards the Himalayas that surround the city. We took a guide for our little mission, but in hindsight it’s extremely easy to grab a map and do it yourself. All you’d need to do is book the teahouses, pay park fees (around USD 25), and follow a pretty straightforward (and at times demanding) trail. 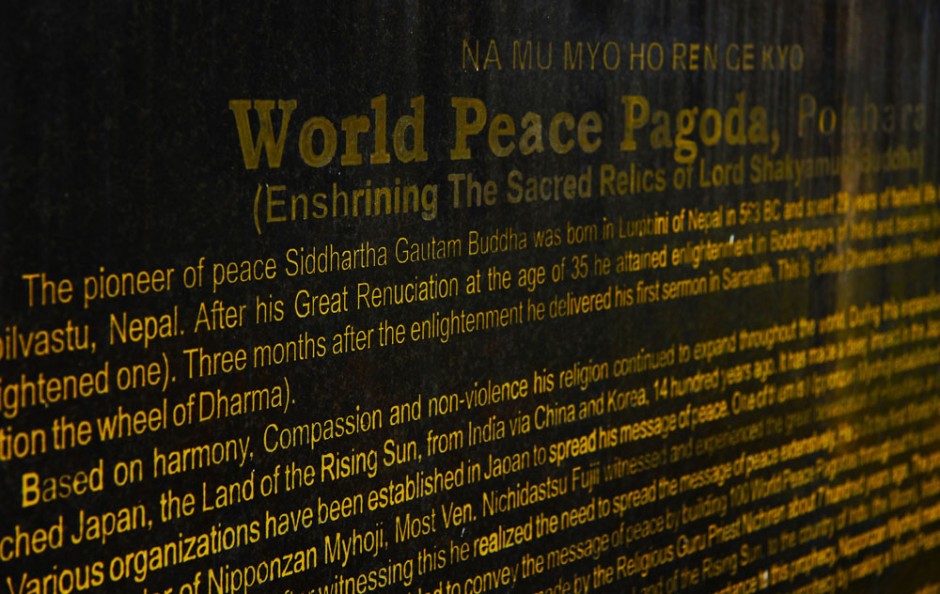 After a casual row across the lake in Pokhara, you’ll climb a not-so challenging half-hour incline (at the most). A Buddhist Peace Pagoda is at the top of the forested hill overlooking the town, lake, adjacent hills, and white peaks that cut into the background on a clear day. Peace pagodas were built over the last century as shrines to world peace (particularly in reaction to Hiroshima and Nagasaki). 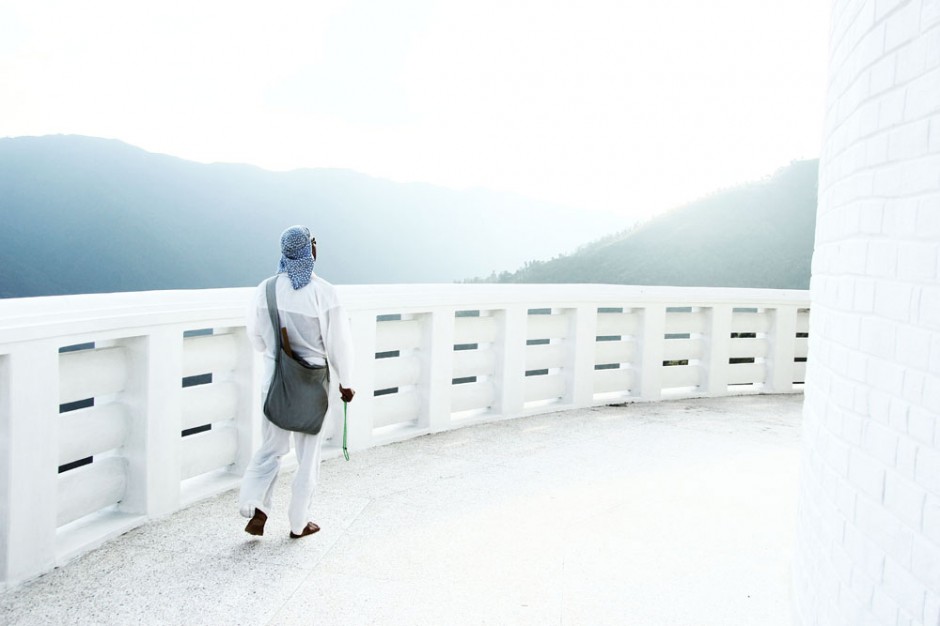 Light and the holy man

This legend was modelling for the brand ‘Purity and Serenity’ on a divine catwalk. Circling clockwise around the stupa, as is custom, becomes quite hypnotic in the glare of the mid-afternoon sun. We trundled down the hill, untied the boat, and splashed our way back to the lakeside bars and restaurants. Lakeside is pretty laid back and stays that way even in peak season. It’s not devoid of tourists, but it's also not sickly rammed with them. 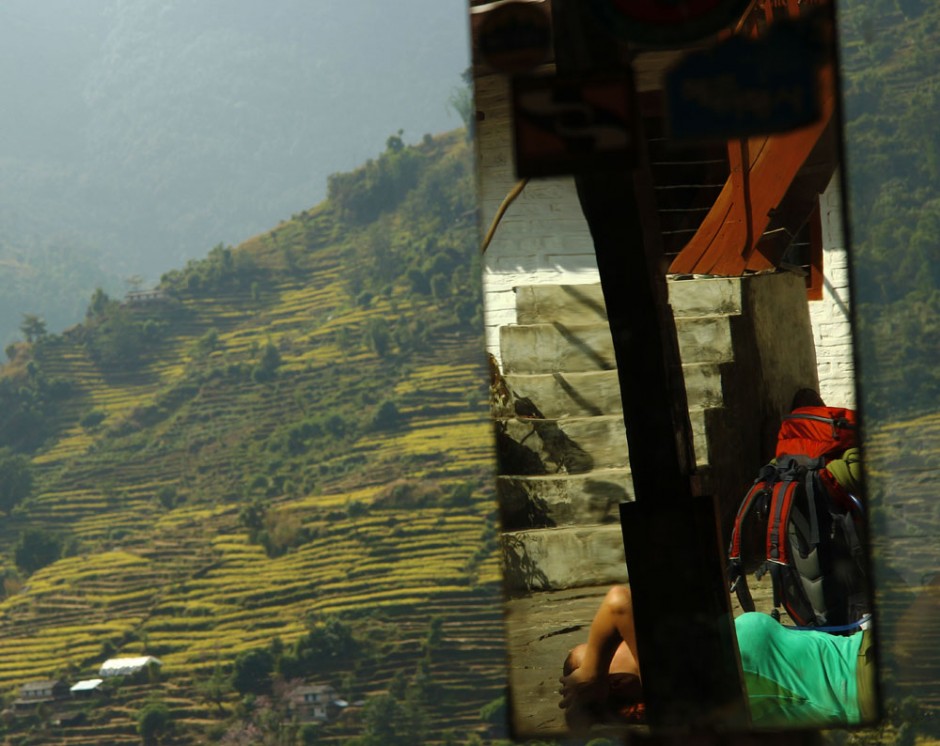 My girlfriend taking a break halfway up the mountain on our first day of trekking. We drove about an hour out of Pokhara to a popular dropoff point to begin our walk. The latter half of the first day consisted of an unreasonable hour of ascending steps. 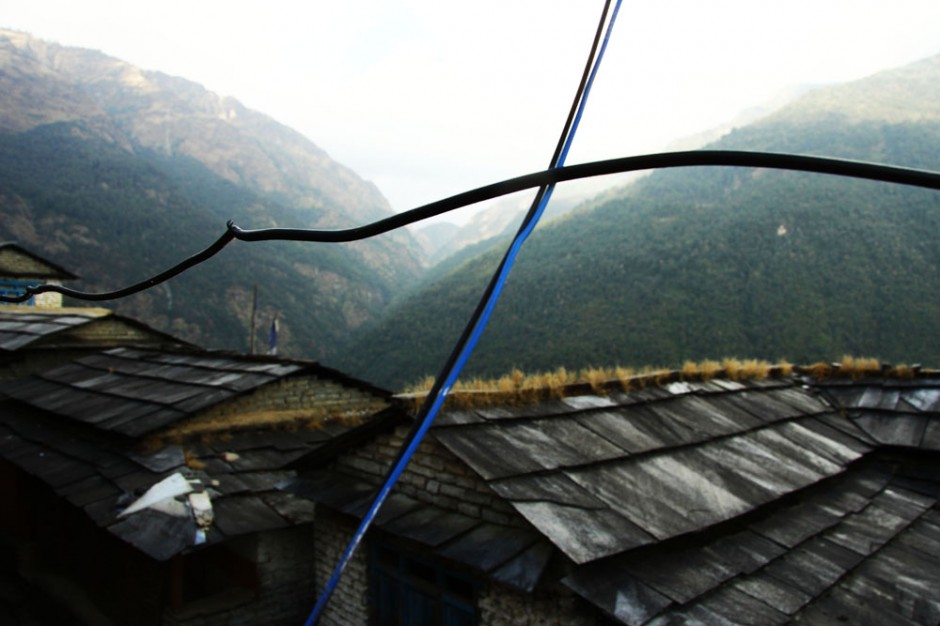 Our view on the first evening’s stay at a teahouse in Ulleri. Take a sleeping bag. The walls are pieced together with the thinnest slivers of wood in Nepal and have enough trouble keeping themselves upright let alone you warm. Luckily our neighbours didn’t get funky with one another -- if they had we’d have known. 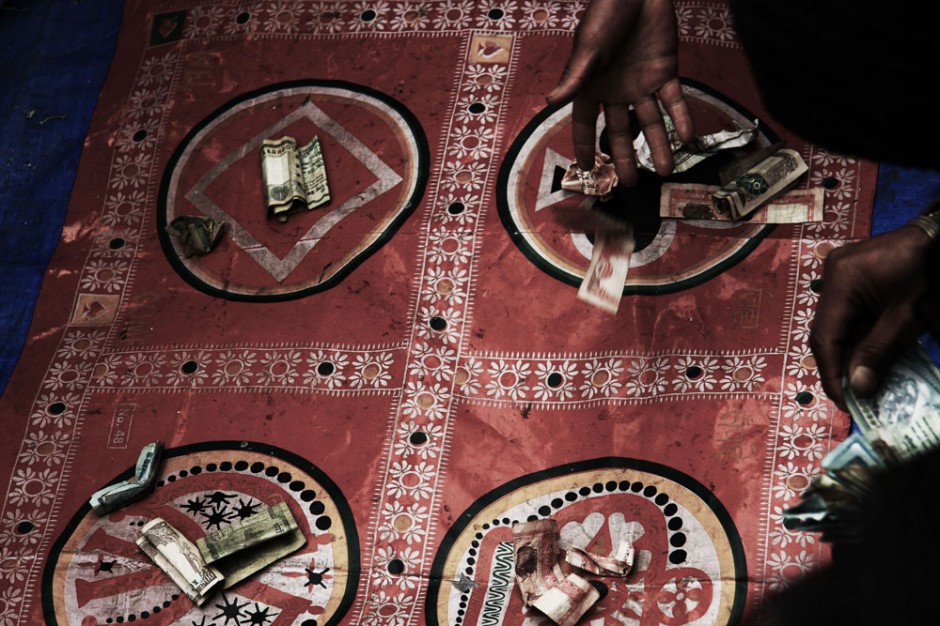 On our second day of trekking, landscapes morphed as we ascended through hill and jungle towards a mountain village. In terms of exercise it was a let down (we walked hard but for just over 2 hours). If you’re a strong walker you may want to do the first two days in one solid go. We arrived in a town called Ghorepani at the foot of Poon Hill. We were trekking during Tihar (a Hindu festival). This involved gambling, the swigging of local brews, and the best dancers in town (who were as charming as they were awful). 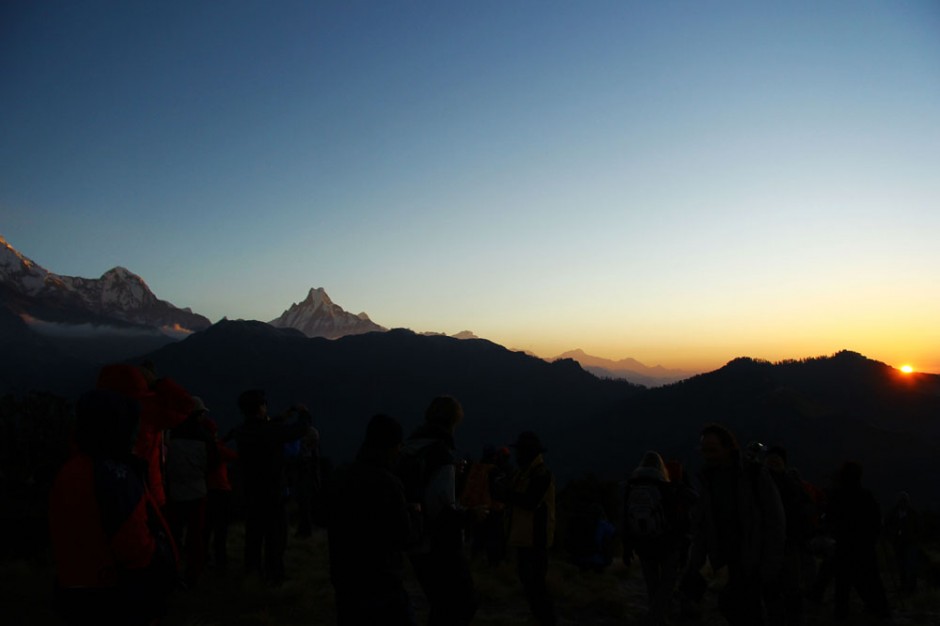 The following morning before sunrise we idled in a traffic jam up to Poon Hill. The speed of the trekkers varies and the slowest and oldest set the down tempo, mood-killing pace. I would suggest waking up 20 minutes before the agreed time to avoid being trapped. From the top you get to see some of the highest peaks on the planet, including Dhaulagiri (26,795ft). 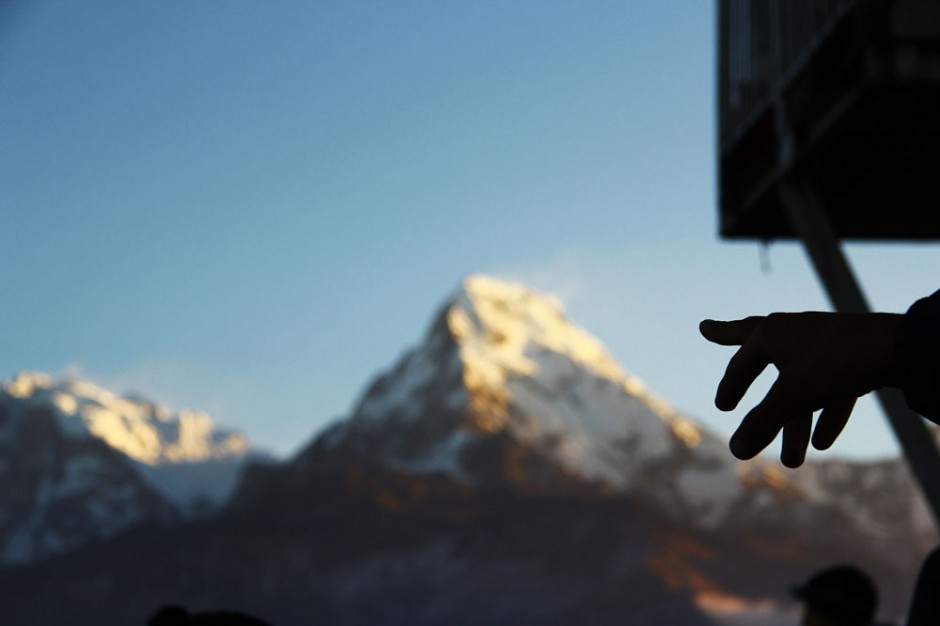 A guide points out Annapurna South, the mountain that claimed the life of the Russian climber Anatoli Boukreev. Boukreev was involved in the infamous Everest disaster in 1996, documented in the book Into Thin Air. 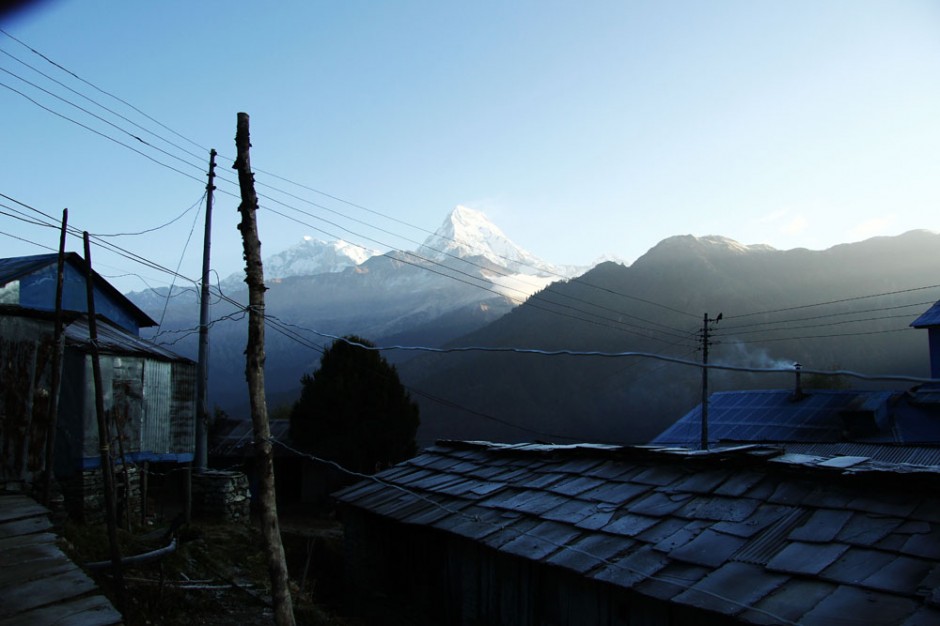 Bird on a high wire

After Poon Hill, we ducked into our teahouse for breakfast. Note: Every menu is essentially identical, so don’t get excited. Porridge for breakfast and dal bhat (the local dish) for lunch (and probably dinner) was my choice. Feel free to go for the spaghetti bolognese AKA slap-dash lasagne AKA thick noodles and mince caked in yak cheese if you want something different. 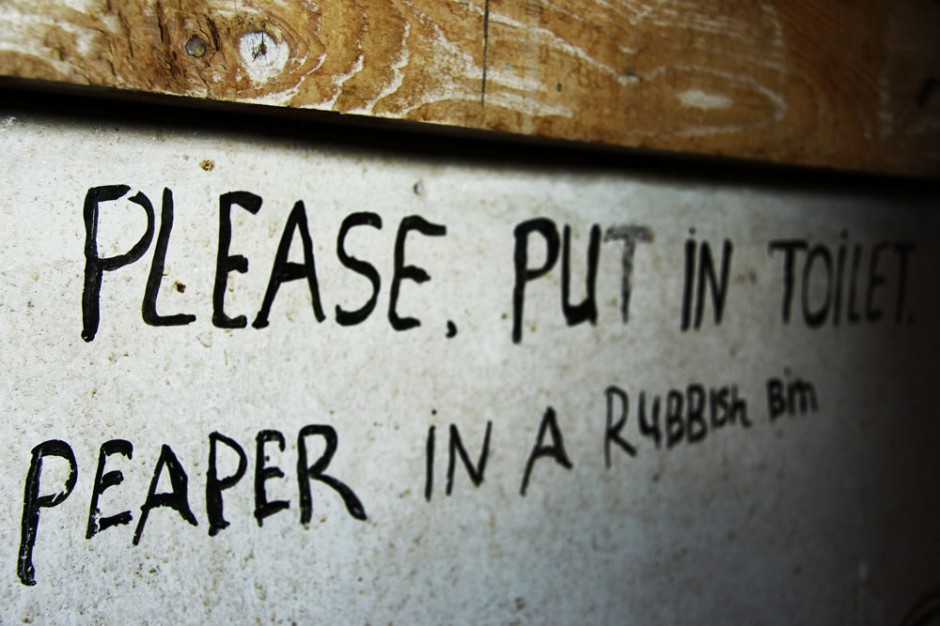 View from the toilet in a teahouse

One or two of the places did have hot showers that you’d do well to hijack before the supplies turn frigid.Photo: Cecilie Giskemo 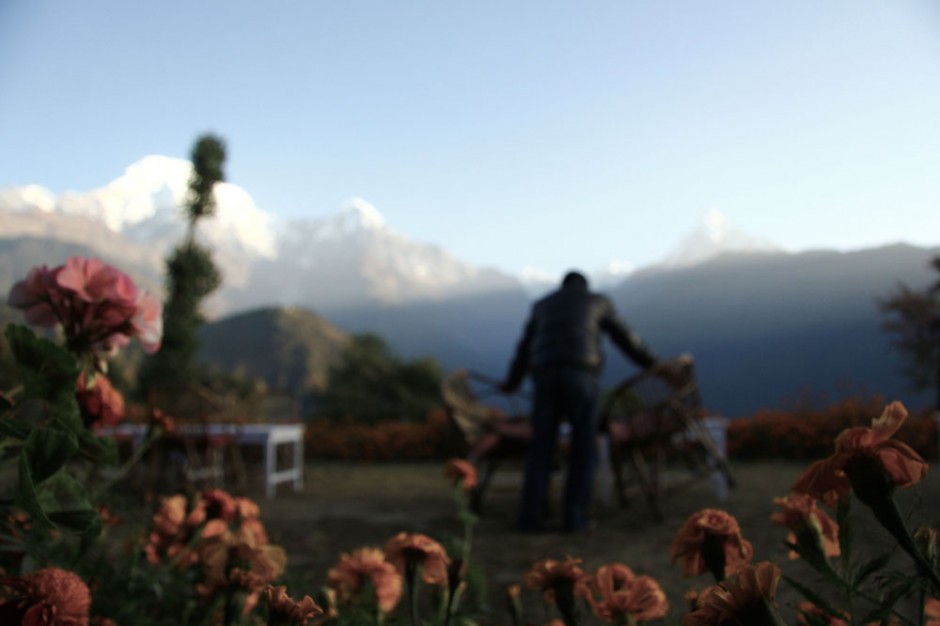 Chairs at first light in Ghandruk

For a short four-day trek, you're constantly provided with a view of the Himalayas. Whilst day 2 (Ulleri to Ghorepani) wasn’t demanding enough, Day 3 was moderately brutal. At one point I counted 1,200 footsteps down a ravine that we had to climb on the other side. I wasn’t in the mood for counting on the way up. 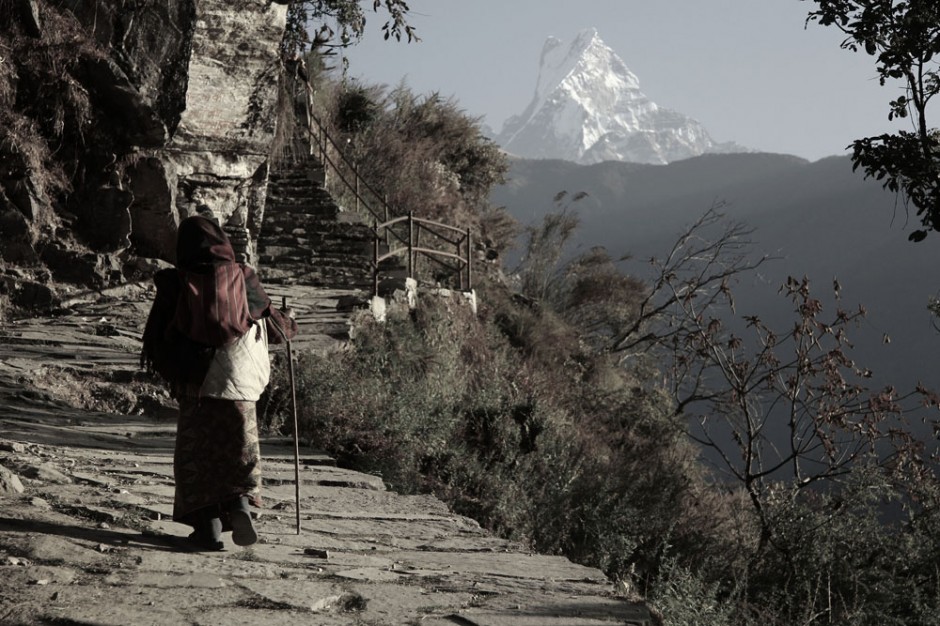 Pretty unbelievable to heave downhill with aching knees and pass someone wrinkled to three times your age without a bead of sweat on their cheeks. 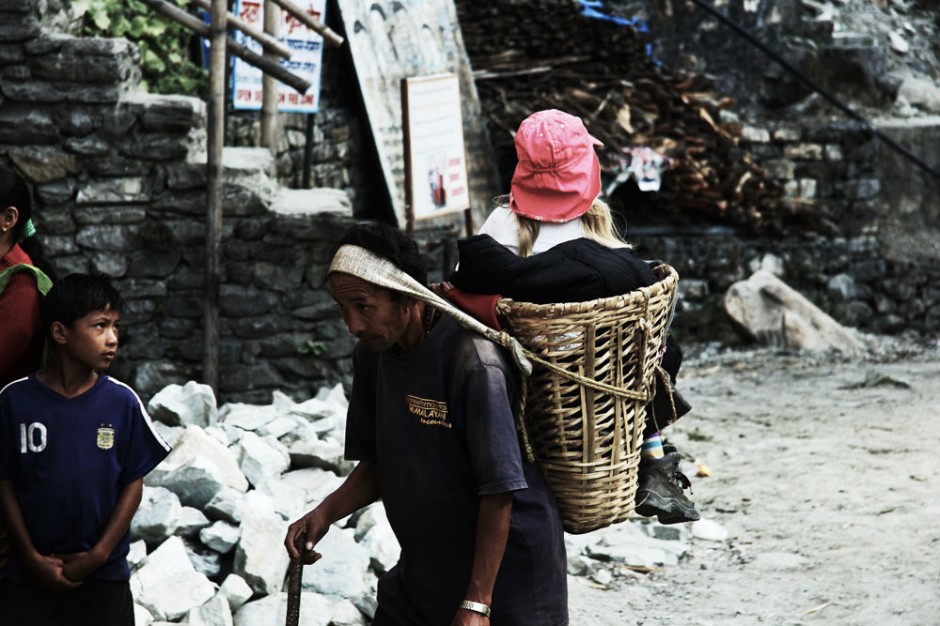 When we got to the bottom on the fourth day, we were ready for a beer by the lake in Pokhara and a deep flesh scrubdown. We had our final dal bhat as we saw a few porters lugging around fair-haired children. I saw one of the fathers of these little cherubs carrying a tiny backpack.

Tagged
Hiking Insider Guides
What did you think of this story?
Meh
Good
Awesome