AFTER SIX WEEKS ON THE ROAD in Alaska, finally heading south felt good. Yancy and I left Arctic Man wiped out and frozen from a week of below-zero days and Stouffer’s bagged stir-frys. We had planned our last stop in Haines before we left home, but had been holding our breath for the stars to actually align. We’d heard from friends about the “knife fight” at the heli-pad, but a call from fellow Matador Ambassador Will Wissman with Stellar Media confirmed they were still holding spots for us.

Haines is arguably the best place in the world for heli-skiing. I’ve been there four out of the past five spring seasons and each year somehow seem to score the best runs of my life while enjoying the relaxed small town atmosphere by the sea. Haines is a fishing town that has a certain mountain energy and vibrancy. Most of the town welcomes the heli community and acknowledges the business it brings to the harbor, which was recently cut off as a cruise ship stop during the economic recession.

I was most fired up this year to share the experience with my brother and live vicariously through his first time getting “towed in” to fragile cornices and steep spine walls. After a weeklong storm, we lucked into a code blue scenario with a relatively stable snowpack, just in time for the last and best weeks of the heli season. We lifted at 6am, and immediately it was go time as our guide, Reggie Crist, and cameraman, Will Wissman, proposed a challenging first line. The zone called Dick’s Picks demands a rider to remember exactly where he’s going because of natural blind rollovers on the face, a very common Alaskan terrain issue and one you don’t want to get wrong. I didn’t doubt for a second that Yancy would step up and slay a nasty line choice with style and confidence. He did just that with first drop, and his first ever filmed Alaskan line. The session was on!

For the next two days we bounced around the mountaintops, picking off lines we identified as aesthetic, difficult, and inspiring to watch on film. Yancy felt right at home copping some serious airtime with every line. We couldn’t have had a better time together riding big mountain lines in perfect blower powder conditions, not to mention getting all the action filmed from the air. Truly unforgettable times were had exploring the Southeast section of the Chugach Mountain Range. A huge thanks to SEABA Heli and the production team at Stellar Media.

Haines is on every powder hound’s bucket list for good reason, and Yancy was ecstatic to check this one off. Leaving Alaska, we headed back down the five-day dusty trail to Idaho and felt like we’d just conquered the world. A two-month, 6,500-mile road trip was coming to a close, and somehow we had pulled it off without any major incidents along the way. The trip, which we’d questioned at first with the snowboarder’s cardinal rule in mind — “Thou shalt not leave powder for powder” — turned out to be a wild adventure and well worth the effort. After all, “the pow is always deeper on the other side…”

Words and photos by Wyatt Caldwell and Will Wissman; video by Yancy Caldwell. 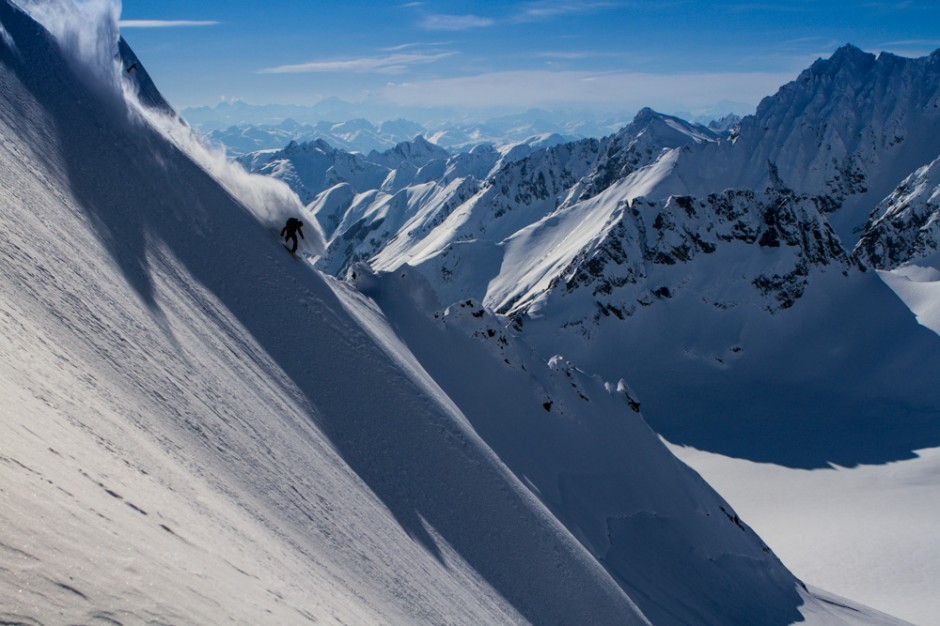 Tony Pavlantos gets barreled on an unnamed zone in Glacier Bay National Park. This is what an afternoon with Fly Drake can get you, if you have capable crewmen like Tony P. 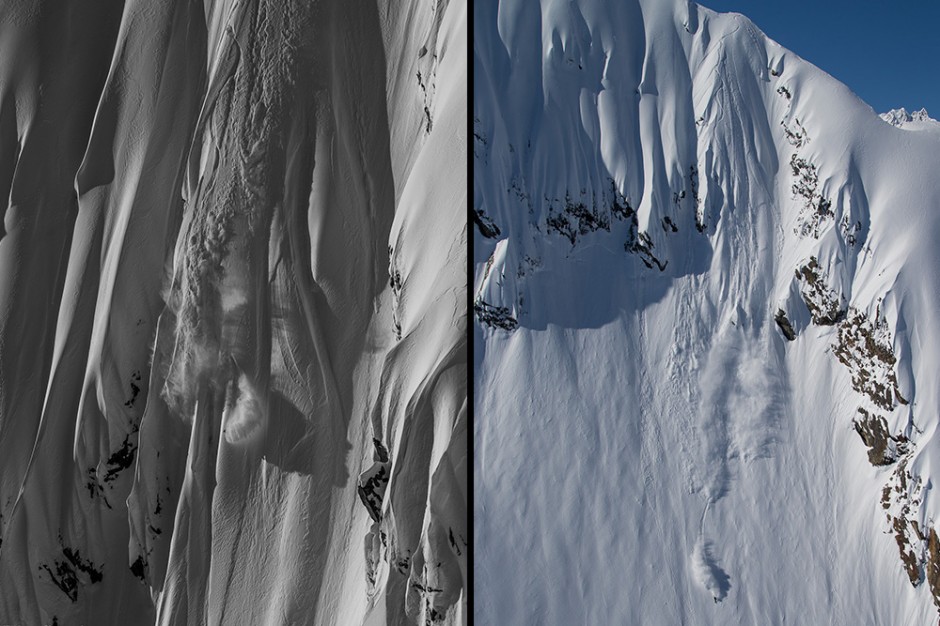 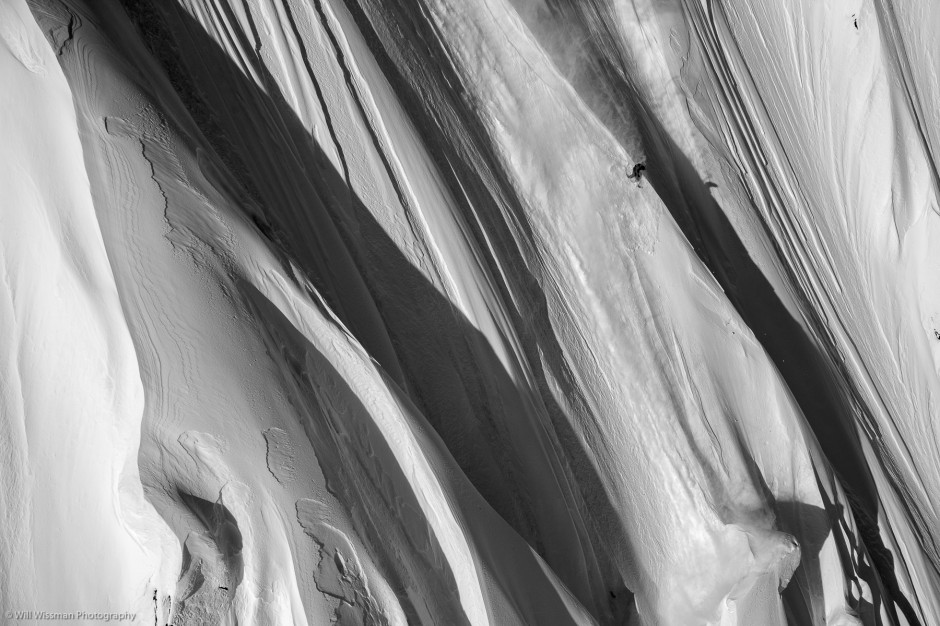 Here I am battling my way down a prominent spine on a super gusty day. The wind made for some incredible images of sluff spiraling into the air. 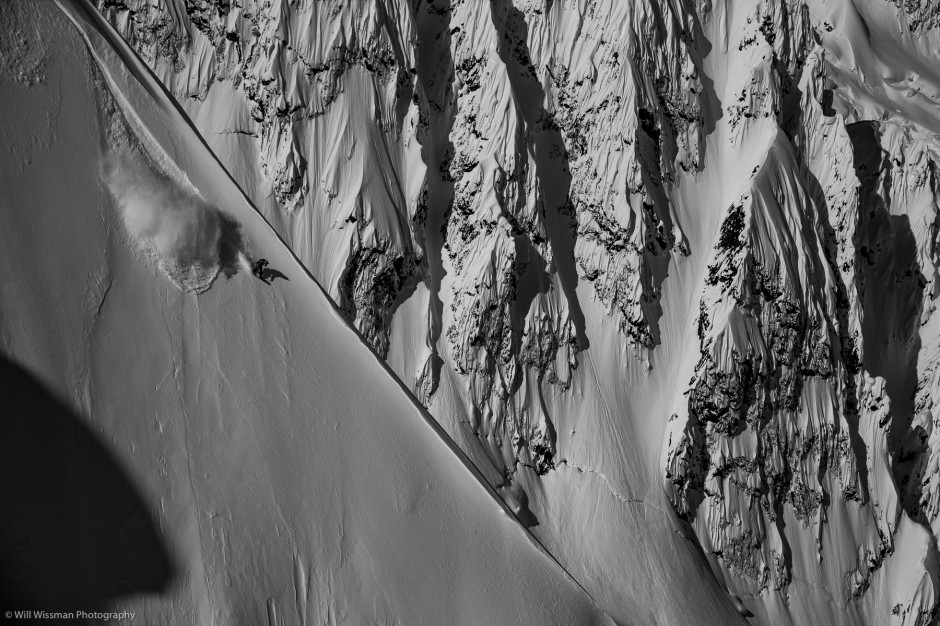 Yancy keeps his speed up as he traverses above a cliff band he plans to launch. 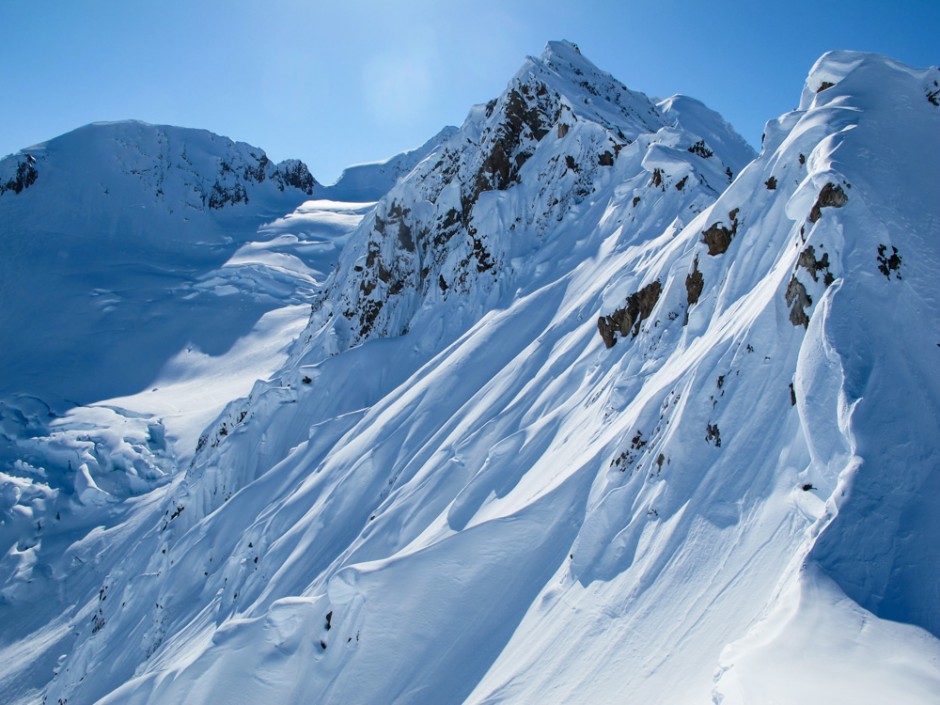 Looking across at a face called FFAA as I prepare to rip one of the most photogenic lines of my life. 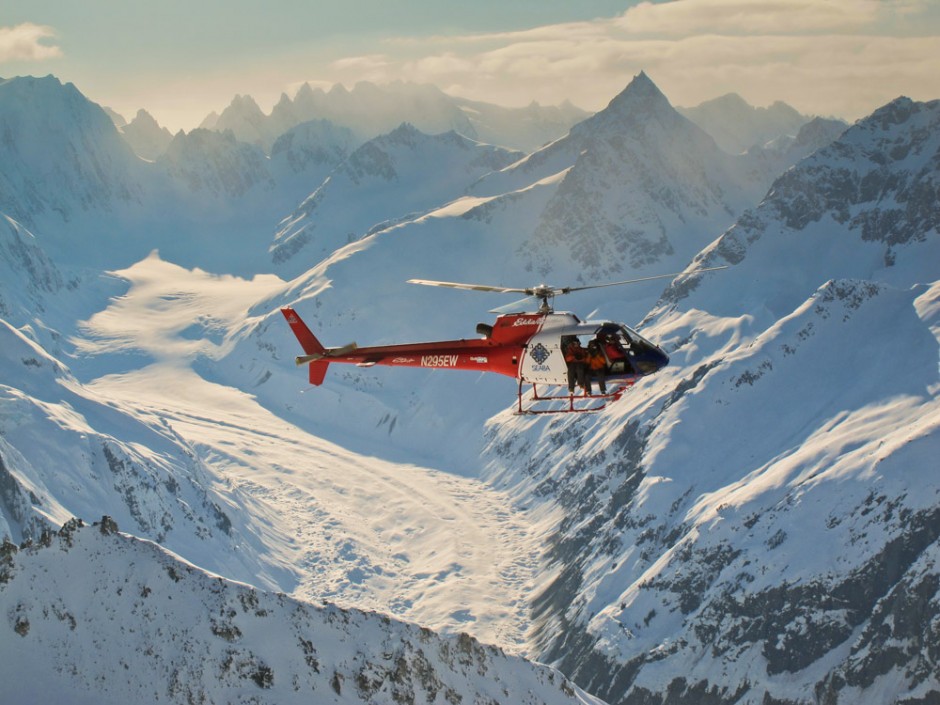 A bit intimidating to drop your line when this is what you see looking out. Stellar Heli in full effect. 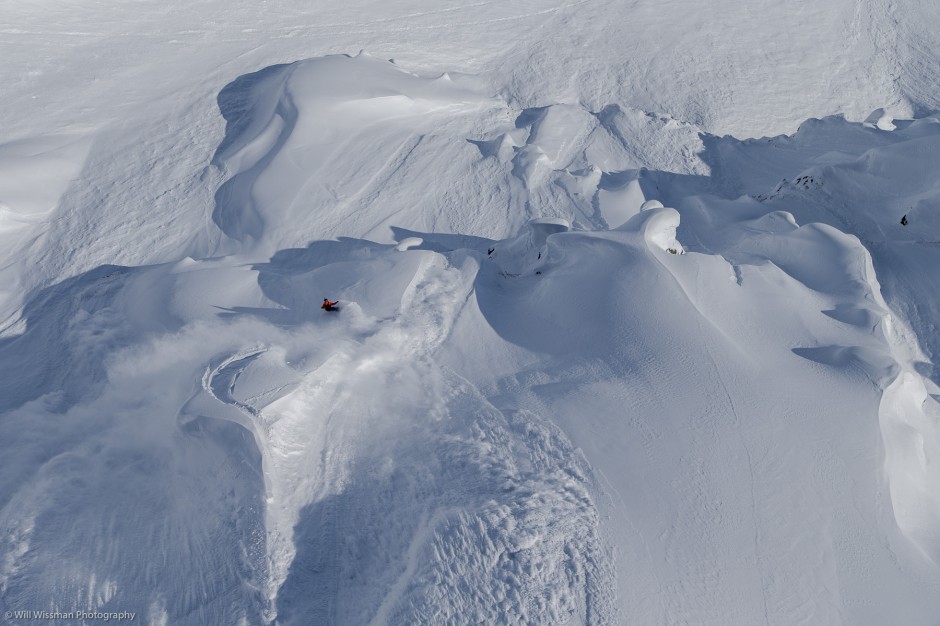 The heli pulled a full rotation around FFAA on this run, giving my line a very unique cinematic aspect. 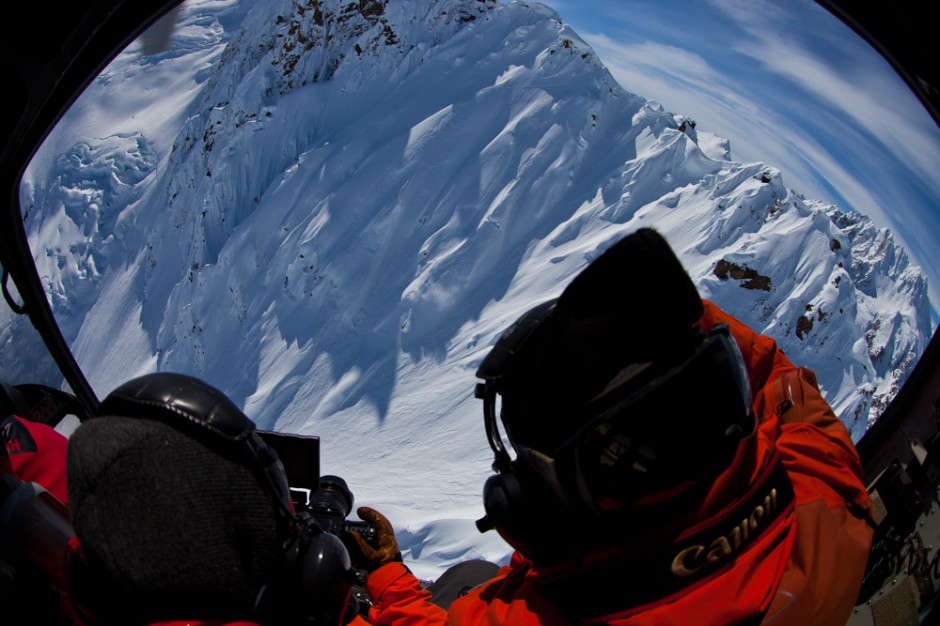 A different angle shows Stellar cameramen Will Wissman and Jeff Loewe getting the shot of Yancy plastering down an FFAA approved spine. 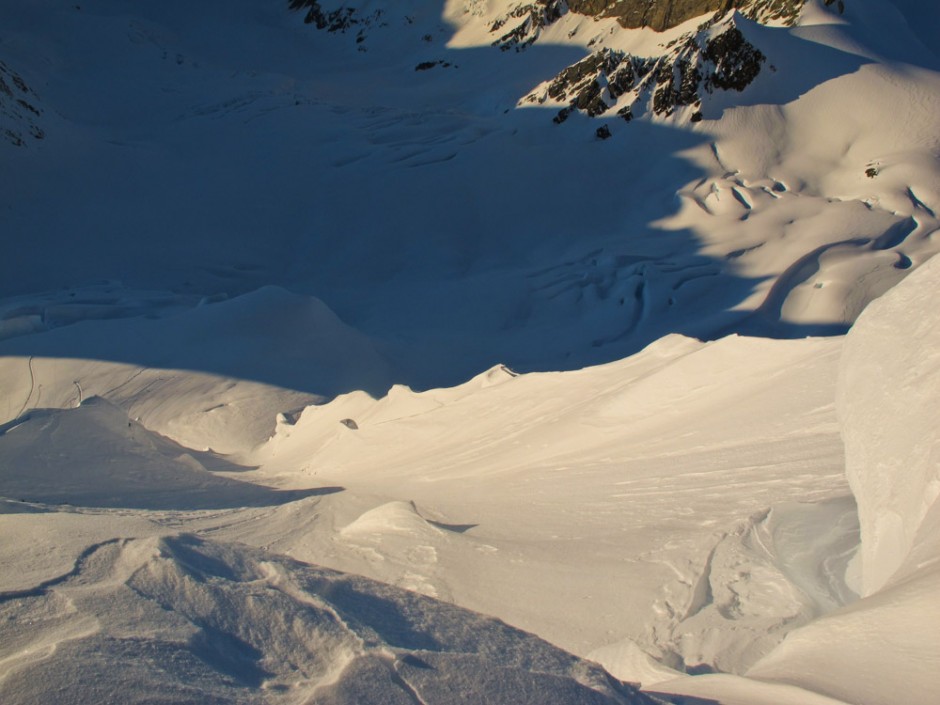 POV of an evening line down a face called Samson and Delilah. I advised Yancy via radio not to pop off the nipple near the top. He did not listen and instead landed himself a 2-page spread. 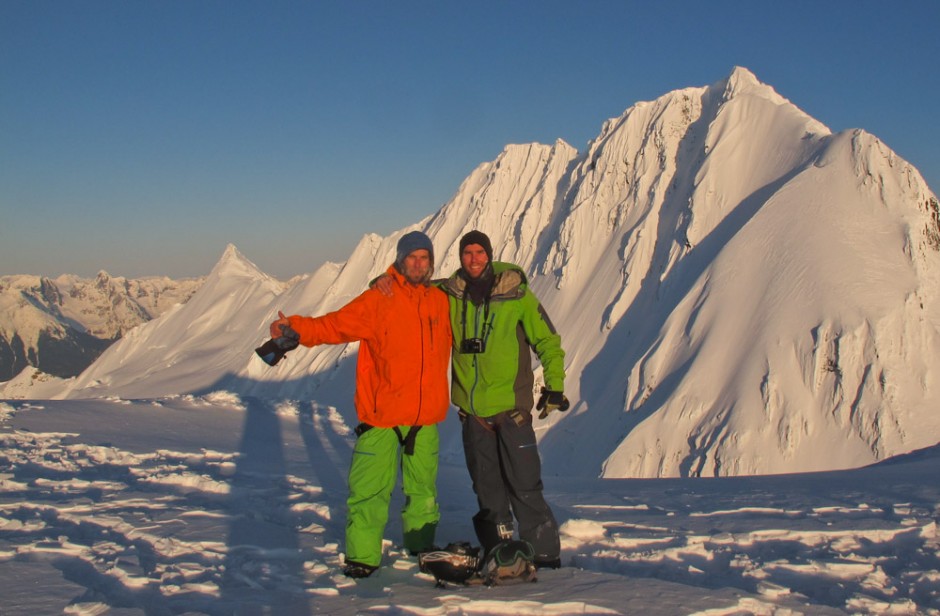 A quick snap of the Caldwell bros after a successful session in the mango chutney evening light. 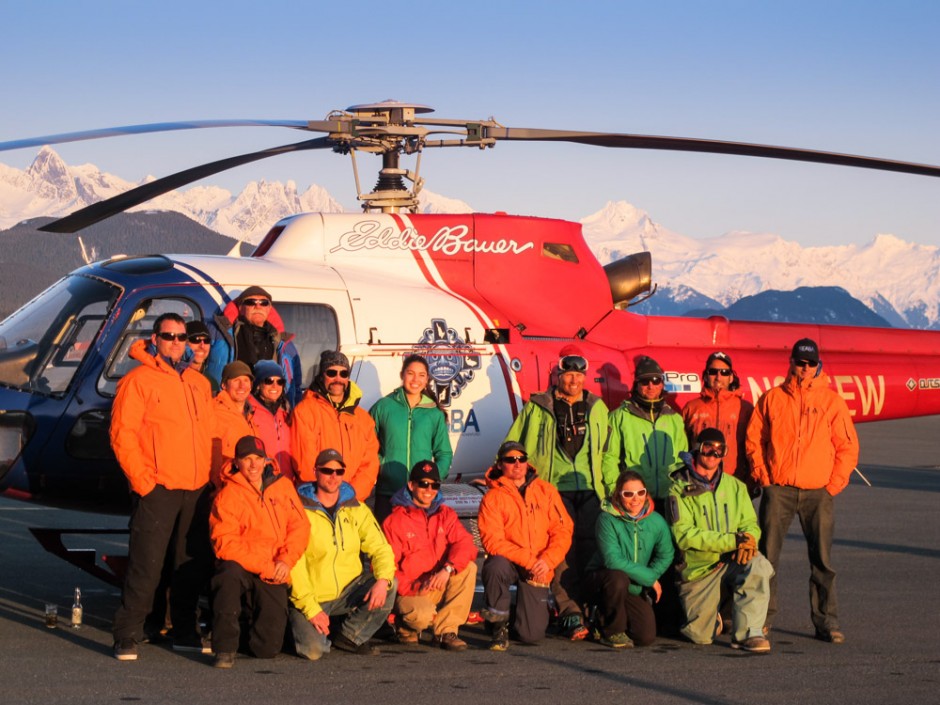 The SEABA Heli staff and guides soak up the last sun rays of the heli season before parting ways for the summer. 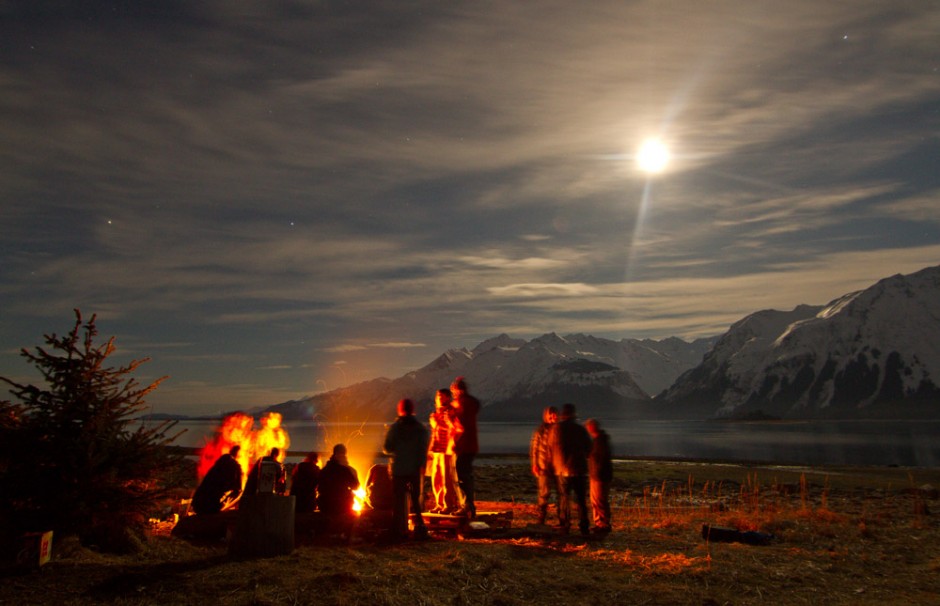 Celebrating the last day of heli season in Haines with a cast of characters at the mouth of the Chilkat River.