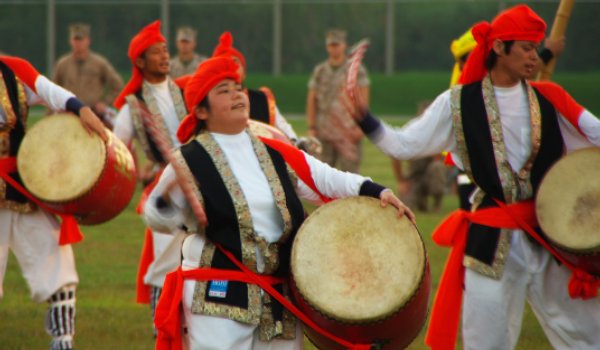 From the largest cities to the smallest villages, Okinawa invites the outside world to share in the culture, dance, music, and spirit of the Ryukyu Kingdom at special events held throughout the year.

Children celebrate their Spring Break (better known as Golden Week in Japan — late April to early May) at this event in Kin Village. A rice paddy is flooded and everyone frolics in the mud under colorful carp streamers.

Live bands, popular singers, dance groups, and typical fair activities take place, lasting well into the night. The highlight of the event is a group photo of unrecognizable, mud-encrusted participants at the end of the day.

The Japanese name for a mud festival is drunku asobu, and these go off in many locations around the island during warm weather. 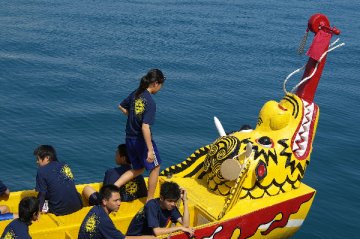 While virtually every fishing village on the island holds a haari (dragonboat) race, Naha City hosts the largest and most colorful boats.

Crews of thirty rowers power the monster craft while crowds in the tens of thousands party and cheer them on from shore.

This three-day festival (another Golden Week event) also consists of live bands, street dances, plenty of food and drink, and fireworks displays each night. Foreigners are not only welcome; they’re invited to join in the rowing!

Another three-day event in central Okinawa, the Tedako Matsuri (Children of the Sun) festival happens each year around the middle of July, on an athletic field halfway up the hill to Urasoe Castle.

In late July, Kin Village draws crowds you’ll typically only see in the larger cities with this two-day festival.

Martial arts demonstrations, sumo, live bands, and top-notch Eisa groups are accompanied by several shishimai (human-powered lion-dogs) that perform antics onstage before jumping into the crowd to snap their wooden jaws at spectators.

The Kanna Dam festival takes place in late July on the northern end of the island near Ginoza. It attracts some of the finest Okinawan mineo (folk music) bands and singers on the island.

Far from any major city, parking is no problem on the acres of well-manicured grounds surrounding the dam. 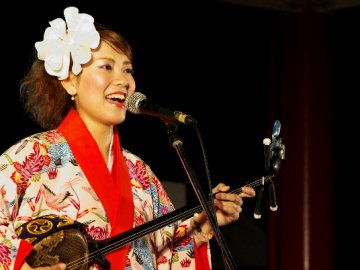 Local farmers and fishermen provide charcoal-grilled chicken and fish, as well as drinks, at bargain prices.

The U.S. Army, Navy, Air Force, and Marines are tenants on eight bases located throughout the island, and each one opens its gates to the public for at least one big annual event.

During these Friendship Festivals, cultural exchange takes place, with each country showcasing its music, dance, sports, food, and drink and gaining a better understanding of its neighbors.

The dragonboat races in Nago City fall during the first week of August and over 150 teams from around the world compete, making it the largest haari event on the island.

Not only is food and drink less expensive at this festival than most, but many of the rowing teams will actually invite you into their tents to share the goodies they brought with them. 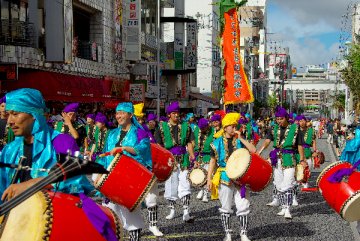 For one long weekend every August, the International Avenue in Naha shuts down for a parade of 10,000 Eisa dancers. Taiko drummers and dancers in brightly colored garments perform for thousands of spectators as they march the mile length of the avenue.

Each village has its own portable loudspeaker system blasting traditional music, its own distinct style of clothing, and a pennant representing its district, strung from a large bamboo pole.

Held in September and similar to harvest moon festivals in other cultures, this event takes place in Kin Village. Classical dances and shishimai entertain the crowd seated before an outdoor stage under a full moon.

As parking is limited, most people walk to and from the event and massive quantities of alcohol are consumed. 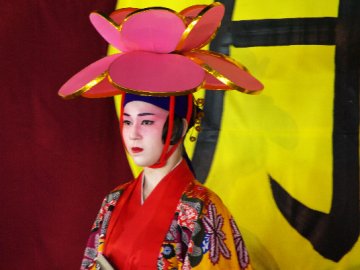 Local musicians provide song and music with their sanshin (a three-stringed instrument) and instead of fireworks, the lion-dog chases the crowd away once the party’s over.

Each October Naha City’s Highway 58 hosts this event, which holds the Guinness World Record for the largest rope made of natural materials. It weighs over 40 tons.

Somewhere around 15,000 people are involved in the tug, with teams divided between residents of eastern and western city districts, and some 200,000 spectators show up to watch. When the war is over, the rope is hacked apart and strands are given out as good luck souvenirs.

The festival takes place October 10-12 this year, but the actual tug-o-war will be held on the 11th.

Due to unpredictable weather on this near-tropical island, it’s wise to confirm events beforehand if you plan to attend. A great (English-language) resource is japanupdate.com. Try the website’s search feature when looking for more details about any of these festivals.

If you’re headed to any of these events, don’t forget to brush up on the local tongue with The Traveler’s Guide to Okinawan Dialect.

While in Japan, you’ll also want to be ordering sushi like a local. Make sure you read Turner Wright’s How to Order Sushi Like a Ninja.

For more on the author of this post, check out Introducing: Okinawa Wildlife Photographer.

Four Stunning Islands You Have To Visit in Okinawa, Japan

New Year’s Day in the Life of an Expat in Okinawa, Japan

What NOT To Do in Okinawa