THERE ARE 177 national embassies in DC. There are also countless headquarters of various international organizations, not to mention the Cultural Centers, Economic Institutes, and monuments to national heroes from countries all over the world. Guidebooks might direct you to the opulent mansions alongside Meridian Hill Park, Sheridan Circle, or upper Massachusetts Avenue that serve as consulates and ambassadorial residencies. Between these, however, the city’s parks, squares, and backstreets are dotted with smaller quirks and curiosities. 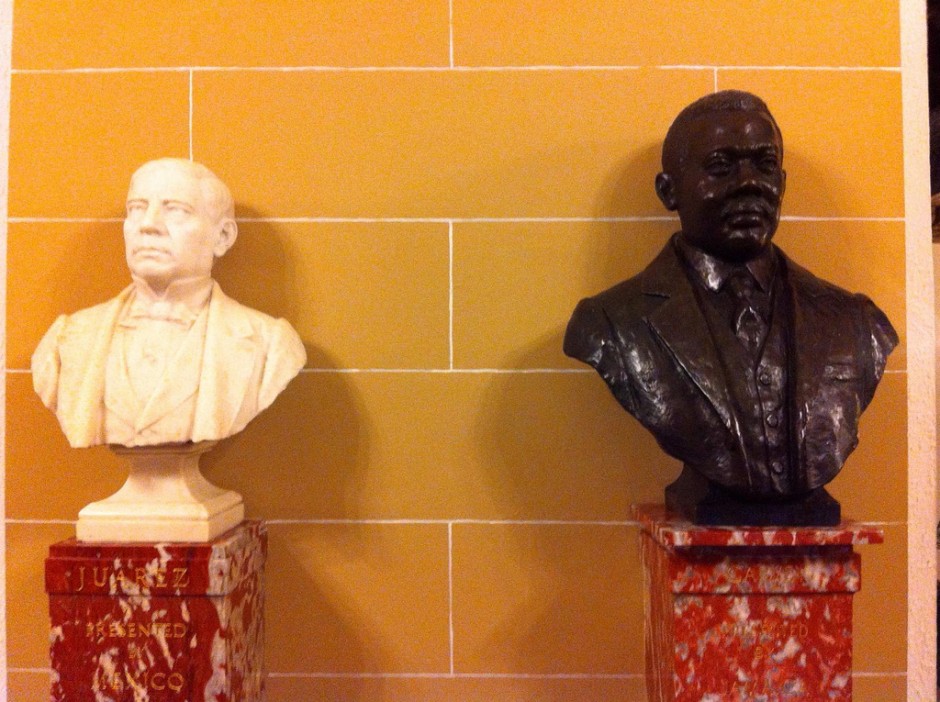 The Hall of Heroes at the Organization of American States headquarters is lined with busts of key national figures from each of the member countries. Only one — Jamaica’s mighty Marcus Garvey — is carved out of black rock. The rest are chalky white, including Garvey’s diminutive neighbor Benito Juarez. History’s most prominent member of the Zapotec indigenous ethnic group of Southern Mexico, Juarez served five terms as president of Mexico. Find it: 17th Street and Constitution Ave. N.W. 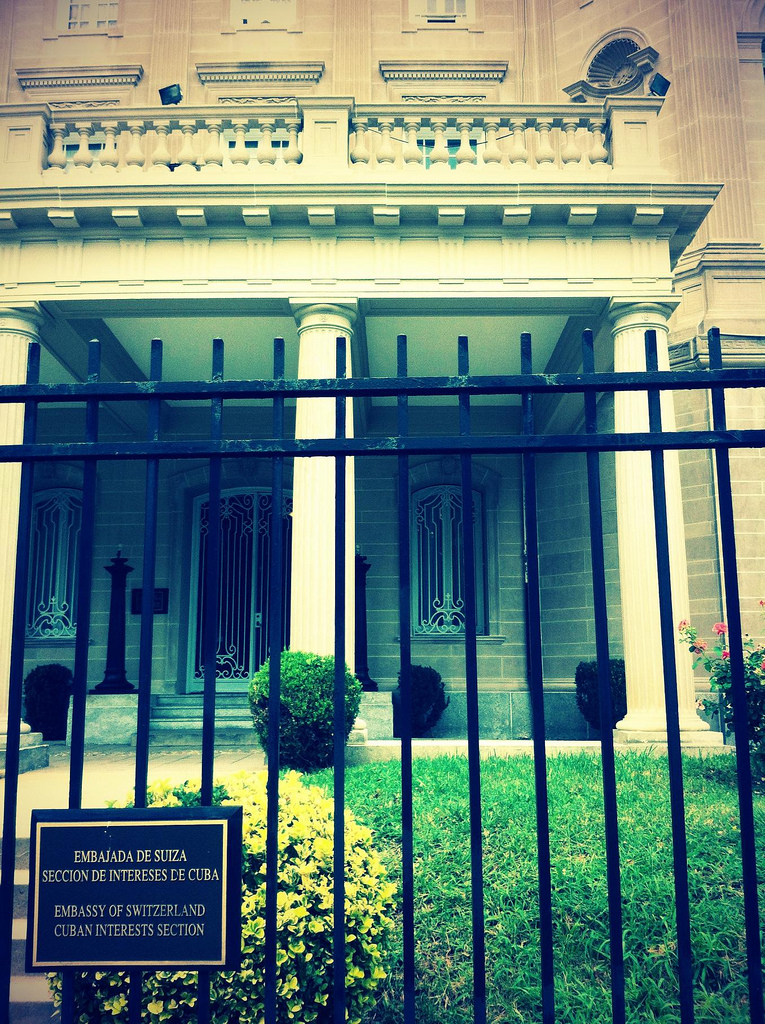 Officially, the US and Cuba have no formal diplomatic relations. Unofficially, there’s still business that needs to be done. During the Cold War, there was one sure place to turn to for conducting said business: good ol' neutral Switzerland. Although it embodied a purer form of capitalism than most aligned countries, in the 1970s Switzerland was the great arbitrator between the two ideological blocs. Under the Carter administration’s policy of normalization of relations with Cuba, in 1977 the two enemy countries opened “Interests Sections” in the Swiss embassies of each other’s capitals. Never mind that it’s staffed by Cubans. Never mind that it operates entirely independently from the actual Swiss embassy, which is in another part of town. Never mind that it’s across the street from the site of the former Cuban embassy. This is most definitely NOT an embassy. Repeat after me: The US and Cuba do NOT have diplomatic relations! Find it: 2630 16th Street, N.W. 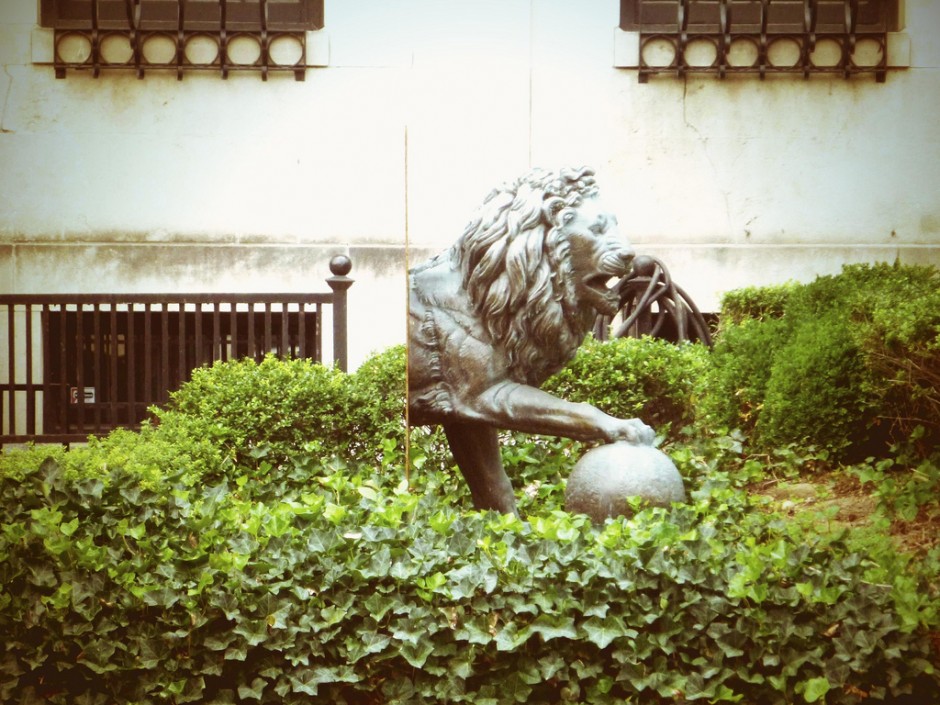 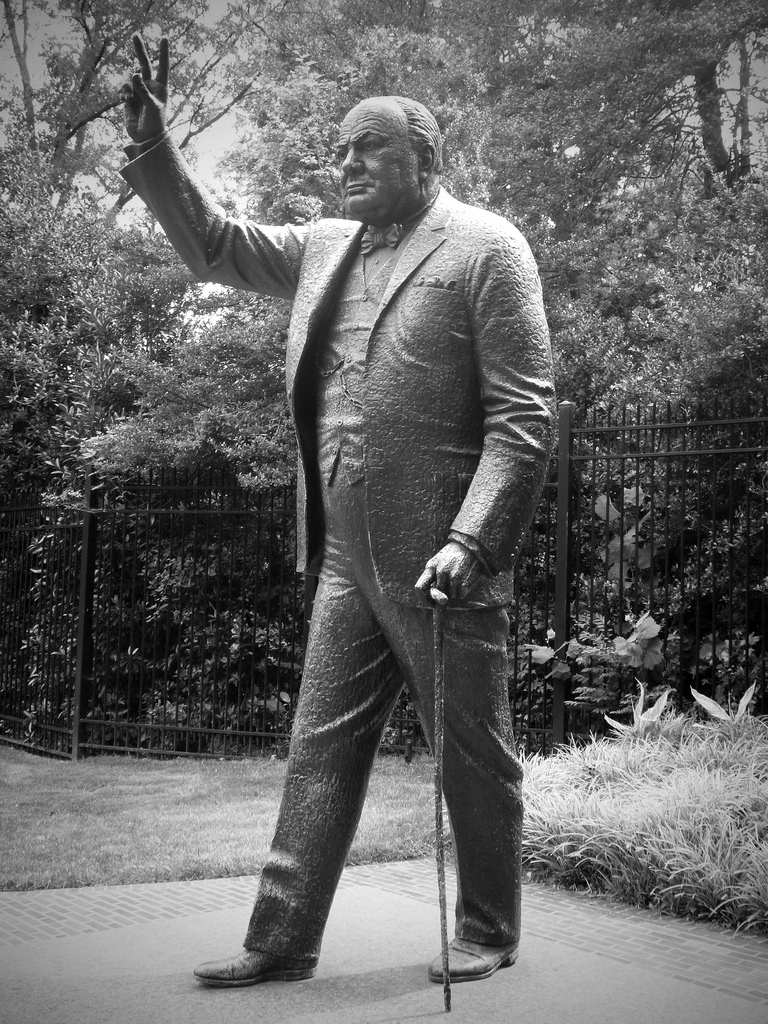 With the tip of his cane supposedly resting on the property boundary of the British Embassy, Churchill makes his trademark “V for victory” sign as he strides from British soil to US soil. This arrangement is meant to represent both his dual nationality (Churchill’s mother was American) and the Atlanticist thread of his politics. Find it: Located in front of the British Embassy on Massachusetts Ave. 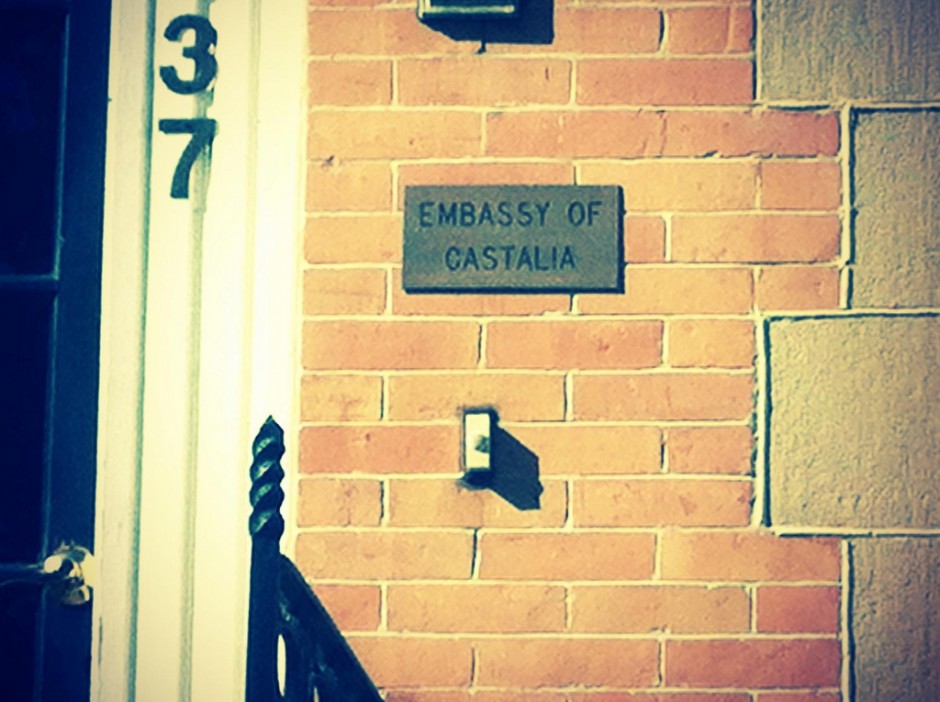 This building is not an embassy. Castalia is not a country. It’s a fictional province of Europe from a Herman Hesse novel. What is going on here? Find it: 1837 R Street N.W. 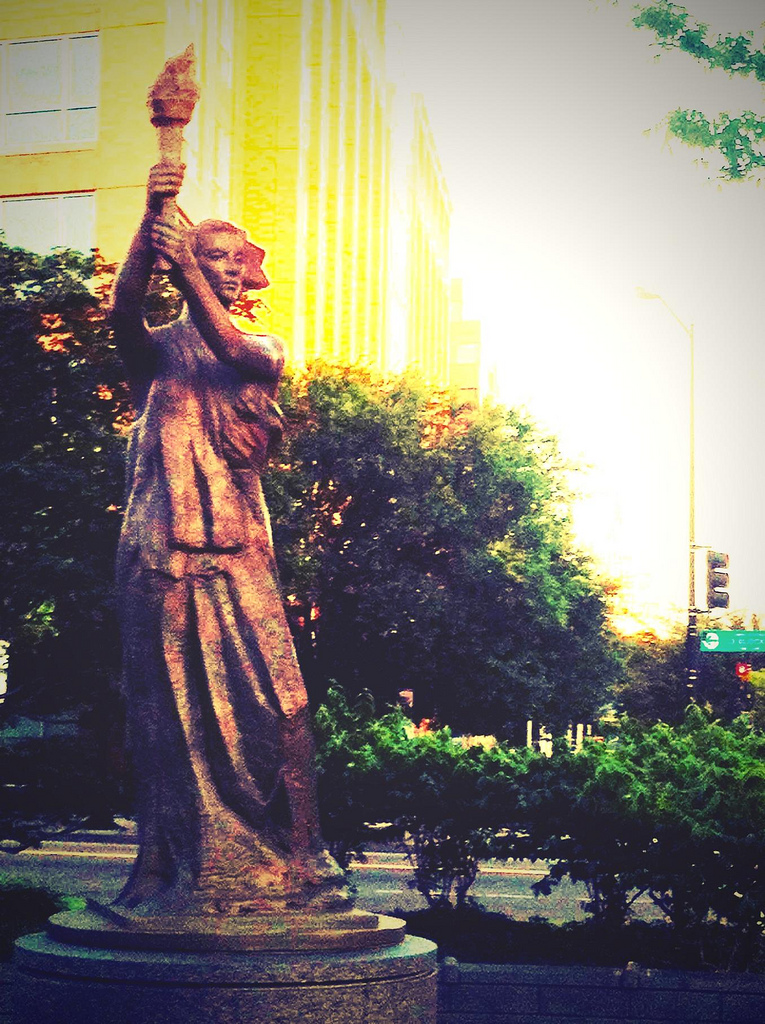 To the "victims of communism"

In 2007, when George W. Bush dedicated this memorial to the “victims of communism,” it stirred up huge critical backlash and drew attention to a contradiction often commented on: When atrocities are committed by communist regimes, they are somehow attributed to the ideology itself, but the converse is not true of brutalities brought about by the excesses of capitalism. We do not call the victims of the Opium Wars or the Atlantic slave trade “victims of capitalism.” Gennady Zyuganov, leader of Russia’s Communist Party, called the memorial “a clumsy propaganda attempt to divert...attention from the true, bloody crimes of U.S. imperialism.” The monument is a replica of the 10-meter-tall papier-mâché Goddess of Democracy sculpture that was created by art students of the 1989 Tiananmen Square protests. The original stood for 5 days before being destroyed by soldiers of the People’s Liberation Army. Find it: Located at the intersection of Massachusetts and New Jersey Avenues and G Street, N.W. 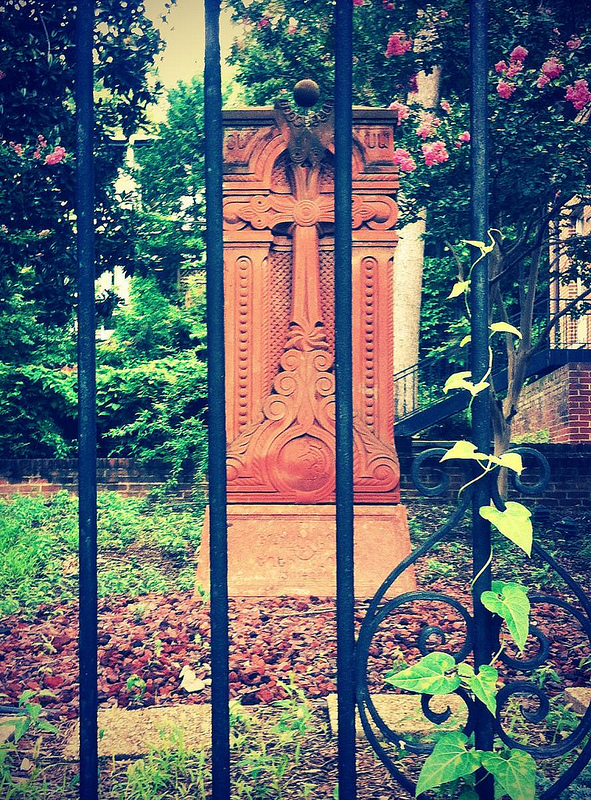 This sculpture of a Khatchkar stands outside the Armenian embassy. It was unveiled in 2001 to mark 1,700 years since Armenia proclaimed Christianity as its state religion — the first state in the world to do so. Find it: 2225 R Street, N.W. 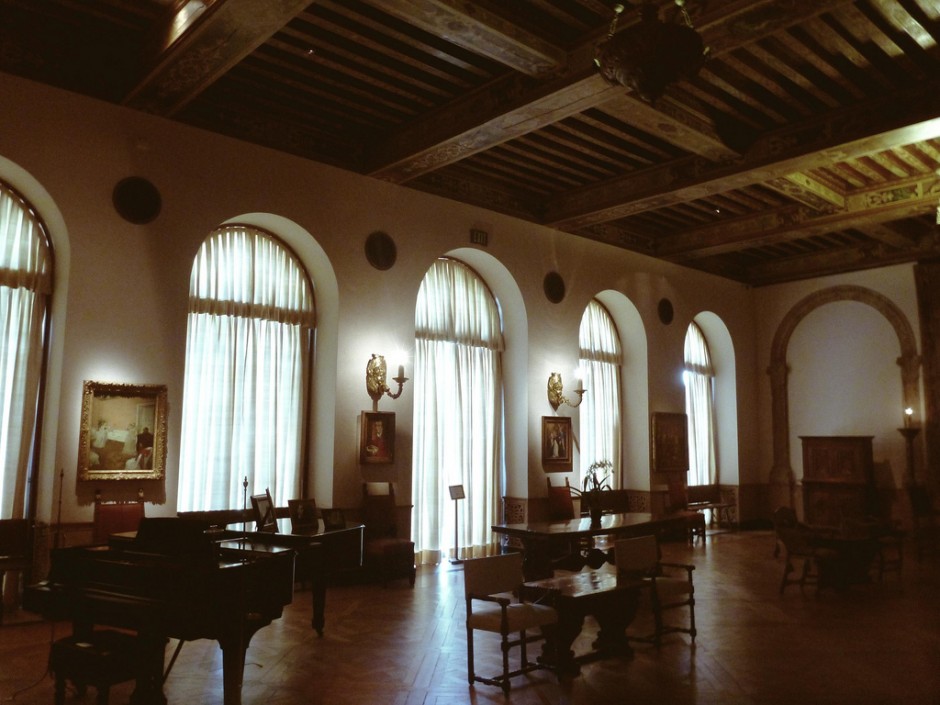 Coaxed out of retirement by the US entry into the Second World War, Robert Woods Bliss, former diplomat in the US foreign services, began offering up his lavish home as a venue for high-level international meetings. In 1944, during the endgame of the war, dignitaries from the soon-to-be victorious Allied countries of the US, USSR, China, and Britain met here to plot the architecture of a new world order (newly liberated France was apparently not invited). The meeting, now known as the Dubarton Oaks Conference, led to the drafting of the charter that would found the United Nations the following year. Today, international relations geeks can peruse the room where it all happened at the Dumbarton Oaks Museum. The Music Room is kitted out in 16th-century Renaissance bling with twin marble arches, antique mantelpieces, and credenzas, murals, a piano, and a harpsichord. Find it: 703 32nd Street N.W. 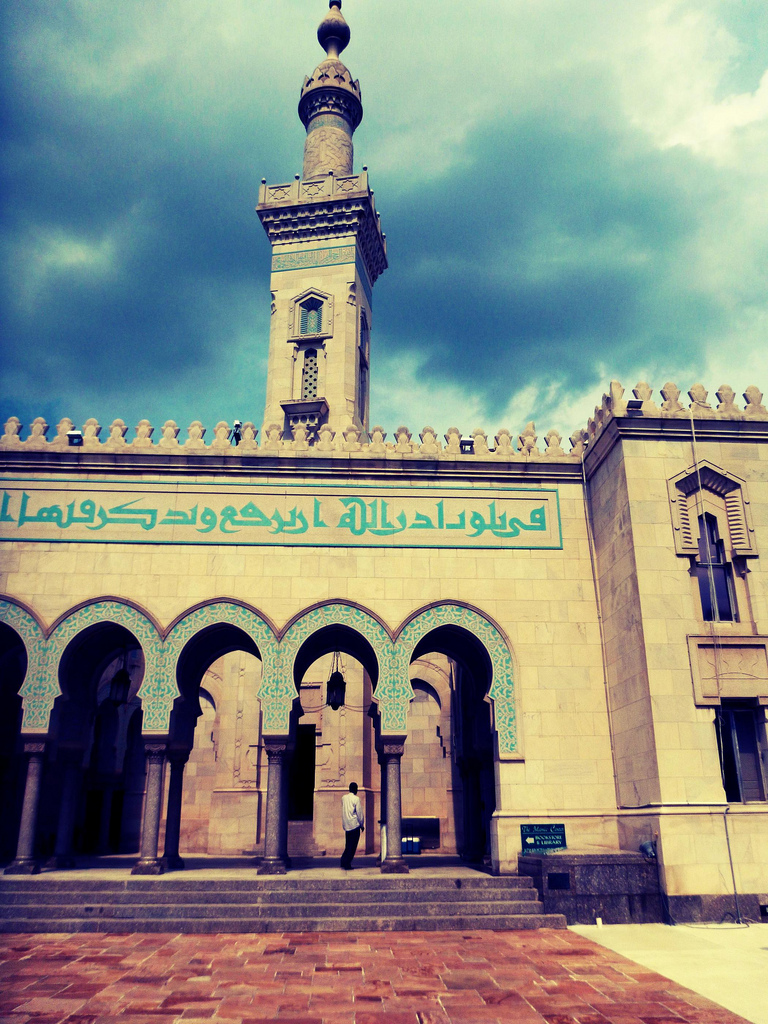 When the Turkish ambassador to the US died in 1944, Washington, DC had no mosque in which to hold his funeral. Plans for the Islamic Center of Washington got underway soon after. Construction began in 1949 on the site next to the Turkish embassy, but the center was not opened to the public until 1957. In 1977, the building was one of three taken over by gunmen from the Hanafi Movement, a radical splinter group of the Nation of Islam. They took 149 people hostage, demanding that the government hand over the men convicted of murdering the children of their leader Hamaas Abdul Khaalis. The building’s 160-foot minaret is now a feature of the DC skyline. Find it: 2551 Massachusetts Ave. N.W. 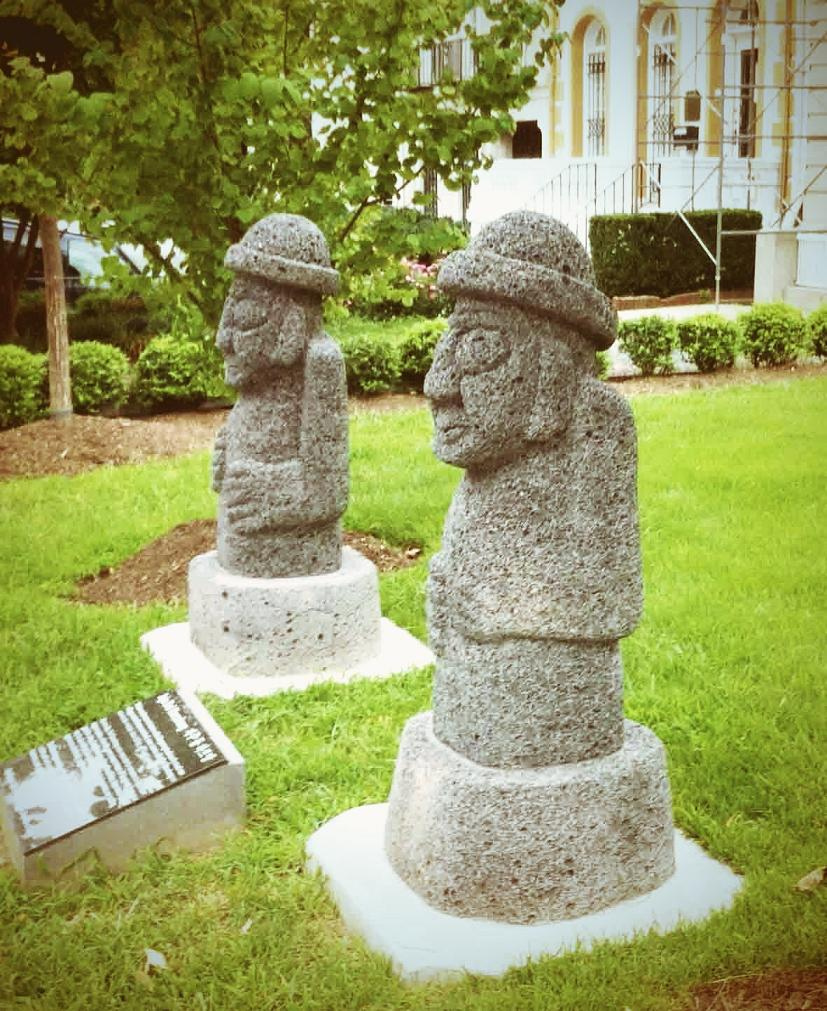 Twin Dol Hareubang stand guard outside the Korean Cultural Center. Thought to be evidence of a shamanic mushroom cult, these stone statues are ubiquitous throughout the island province of Jeju off the southern coast of South Korea. If they appear comical to you, it’s because that’s the idea. The statues are meant to “exhibit the humorous and smiling appearance of a friendly, neighborhood elder.” Now an autonomous self-governing province, Jeju was the setting for brutal anti-communist crackdowns in the buildup to the Korean War. Find it: 2370 Massachusetts Ave. N.W. 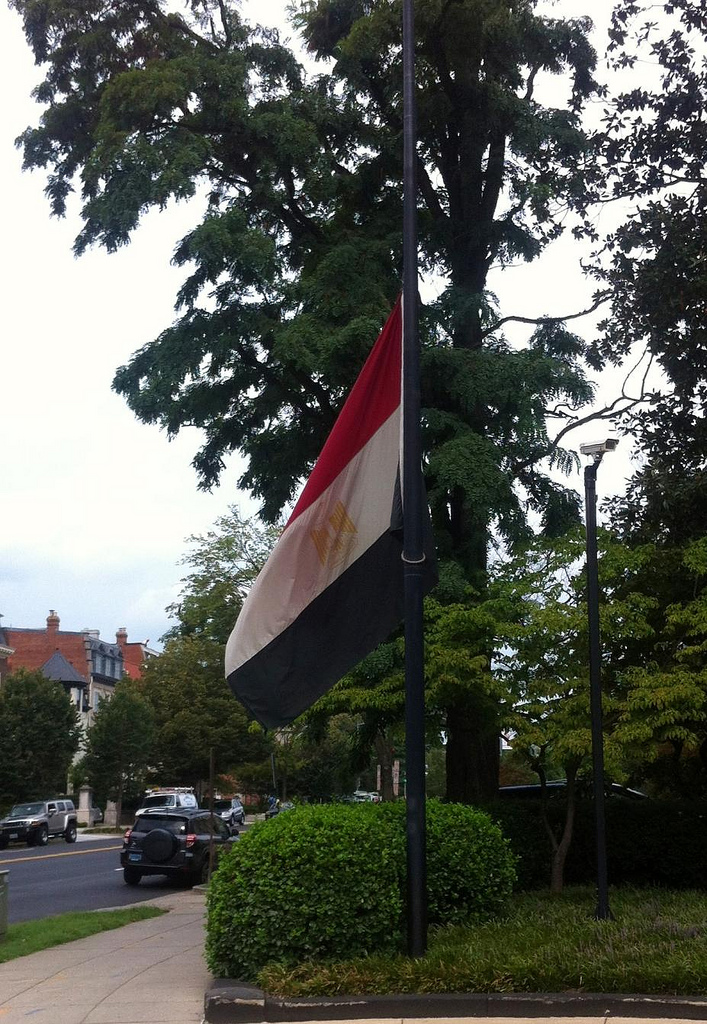 The flag flies at half-mast at the Egyptian embassy on the day that the Egyptian military bombarded suspected Islamic militants in retaliation for attacks on security checkpoints in Sinai. Find it: 3521 International Court N.W.