The Aboriginal Cultural Festival is a three-day summer event honoring and celebrating the rich First Nations culture and people in Canada. It is held on the grounds of the Royal BC Museum in Victoria’s Inner Harbor on the traditional territories of the Songhees and Esquimalt First Nations. It’s a weekend of tradition, unity, sharing and storytelling through dancing, drumming, singing, food and art and coincides with National Aboriginal Day in June.

The First Nations people are tremendously proud to share their culture and traditional ways. The Tzinquaw Dancers from Cowichan First Nation treated us to a song we wouldn’t otherwise hear, a song so sacred they asked that no one record or photograph it.

Performers brought animals to life through dance and intricately carved masks. There was colorful regalia as diverse as the Nations represented, there was the heartbeat of Mother Earth echoing around the Inner Harbor heard through skillful drumming, and people from all walks of life smiling enthusiastically as they joined a friendship dance. 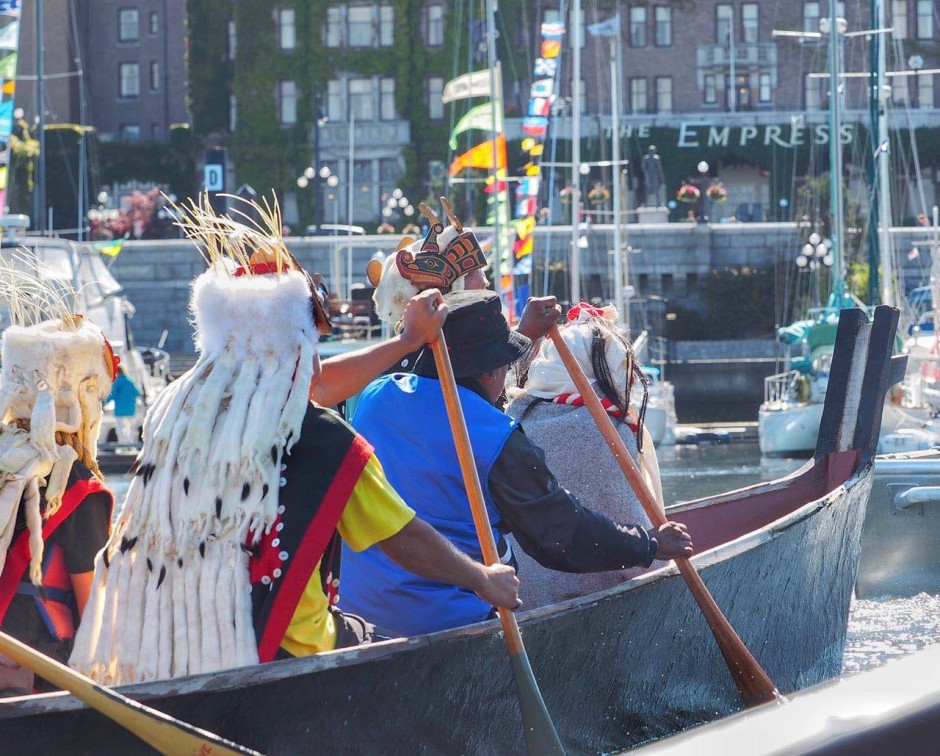 Three canoes with Aboriginal and non-Aboriginal people, including local mayors, business leaders and myself arrive in Victoria’s Inner Harbor to the shared traditional territory of the Songhees and Esquimalt Nations to ask for permission to come ashore, a time-honored protocol. The welcoming of canoes ceremony marked the opening of the 3-day Aboriginal Cultural Festival and was an historic moment, as it had never been done before in the history of Victoria. 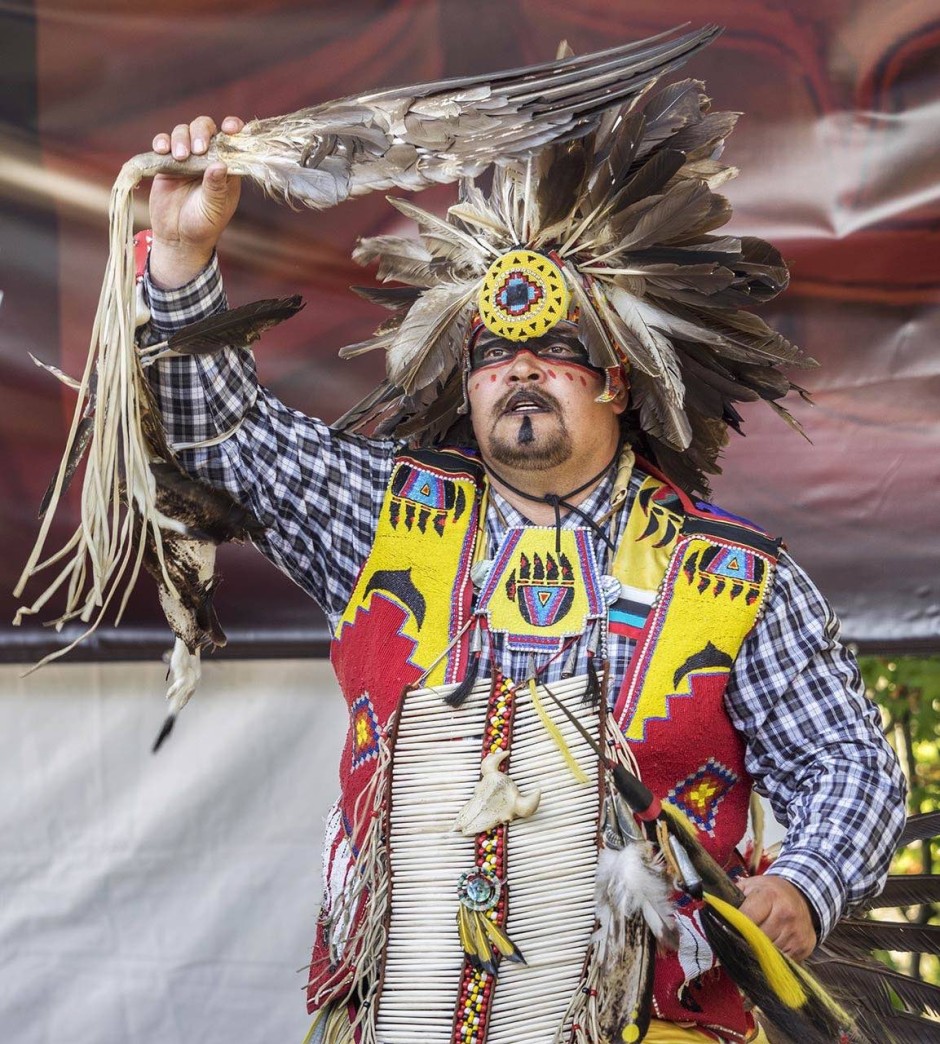 Daniel Wells of Lil’wat First Nation performs a men’s traditional dance, mimicking the motions of a hunter and telling the story of the warrior through his dance. The eagle feather shields the warrior from the sun. 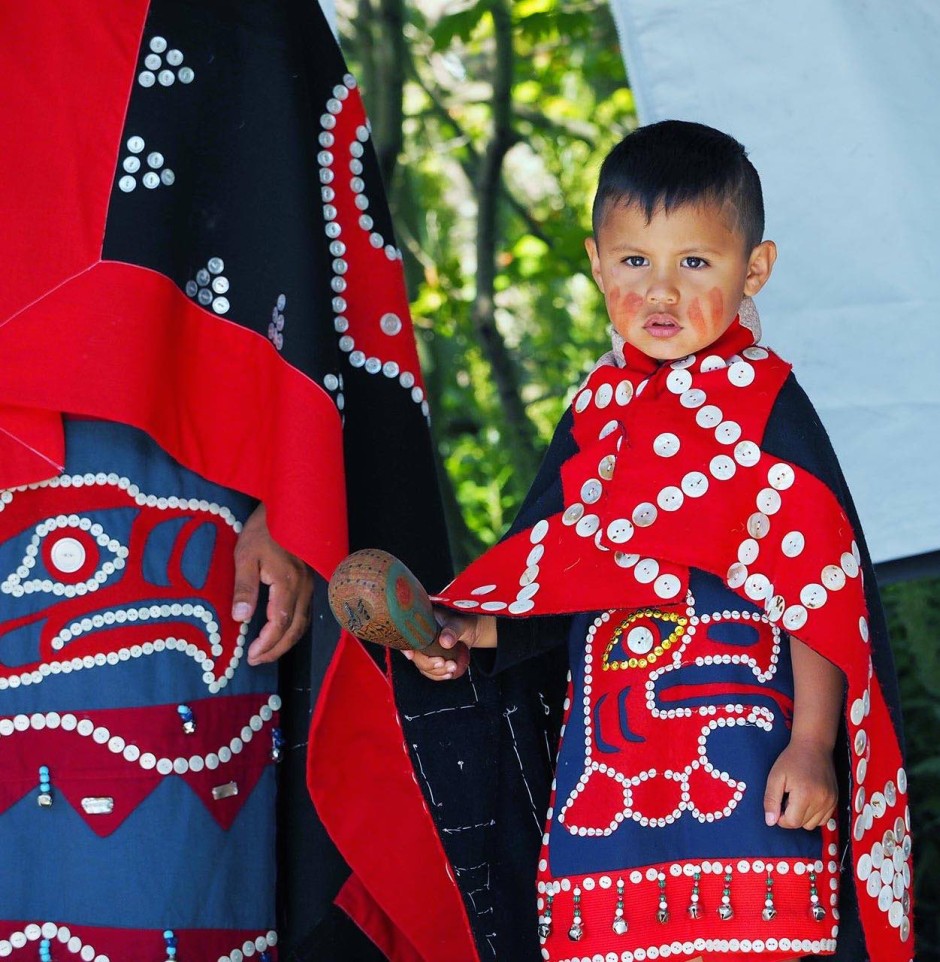 Lason Taylor performs alongside his father, Jason. Lason is a 3rd generation member of the Le-La-La Dancers First Nations dance company. The Le-La-La dancers are from the Kwakwaka'wakh First Nation in Northern Vancouver Island. The passing of stories from generation to generation is how their rich culture has survived. 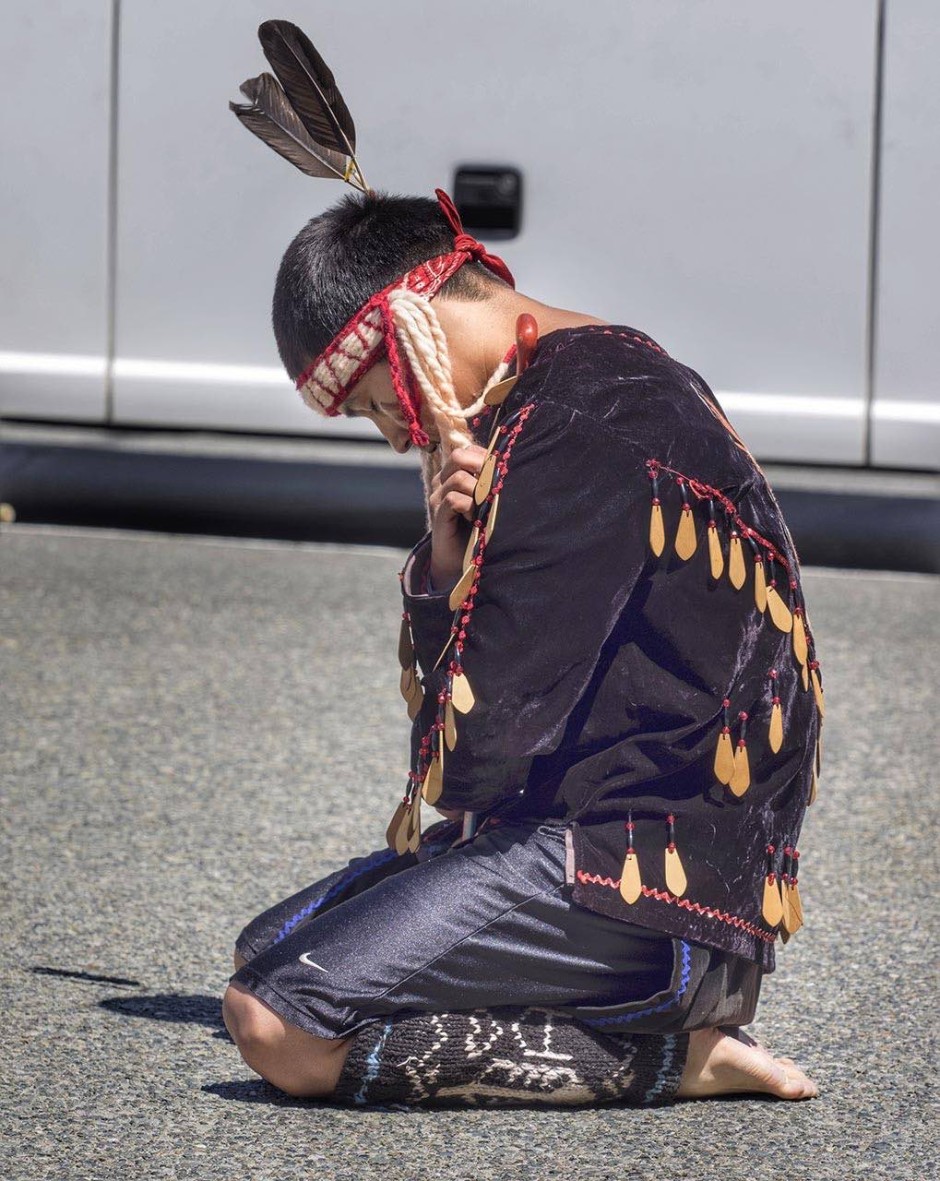 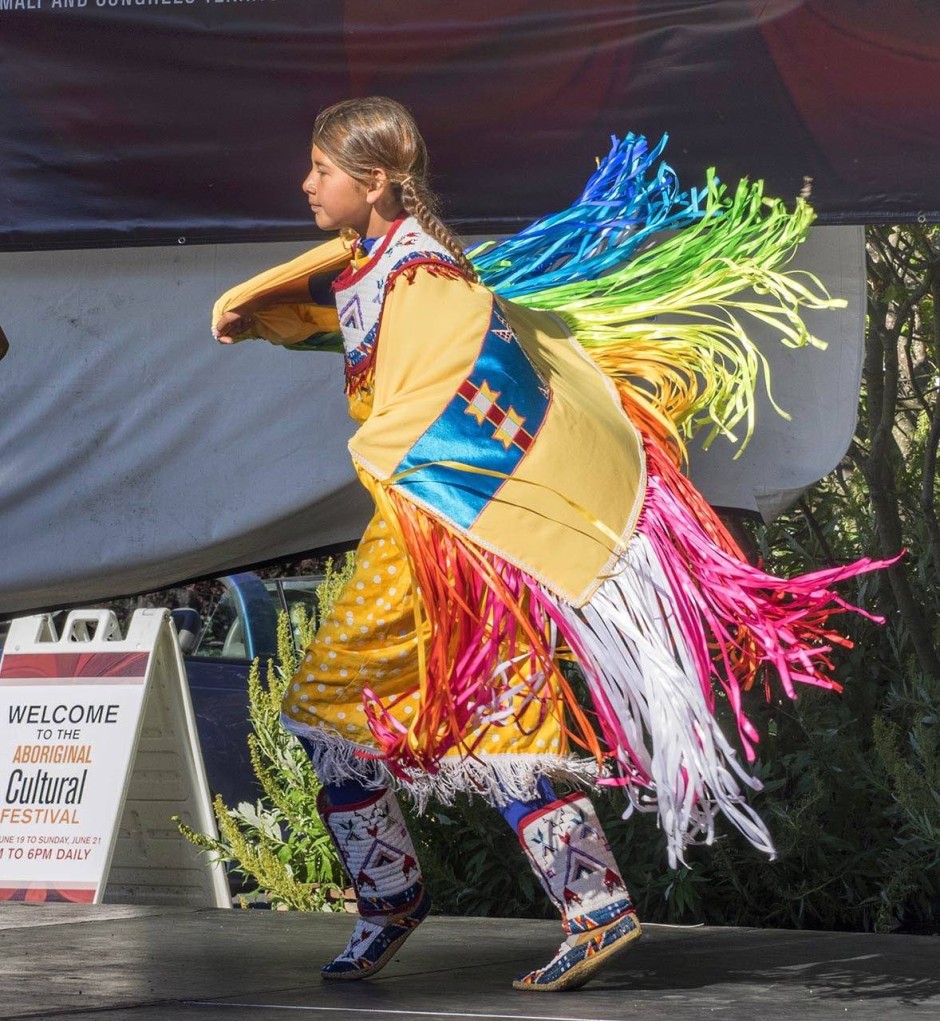 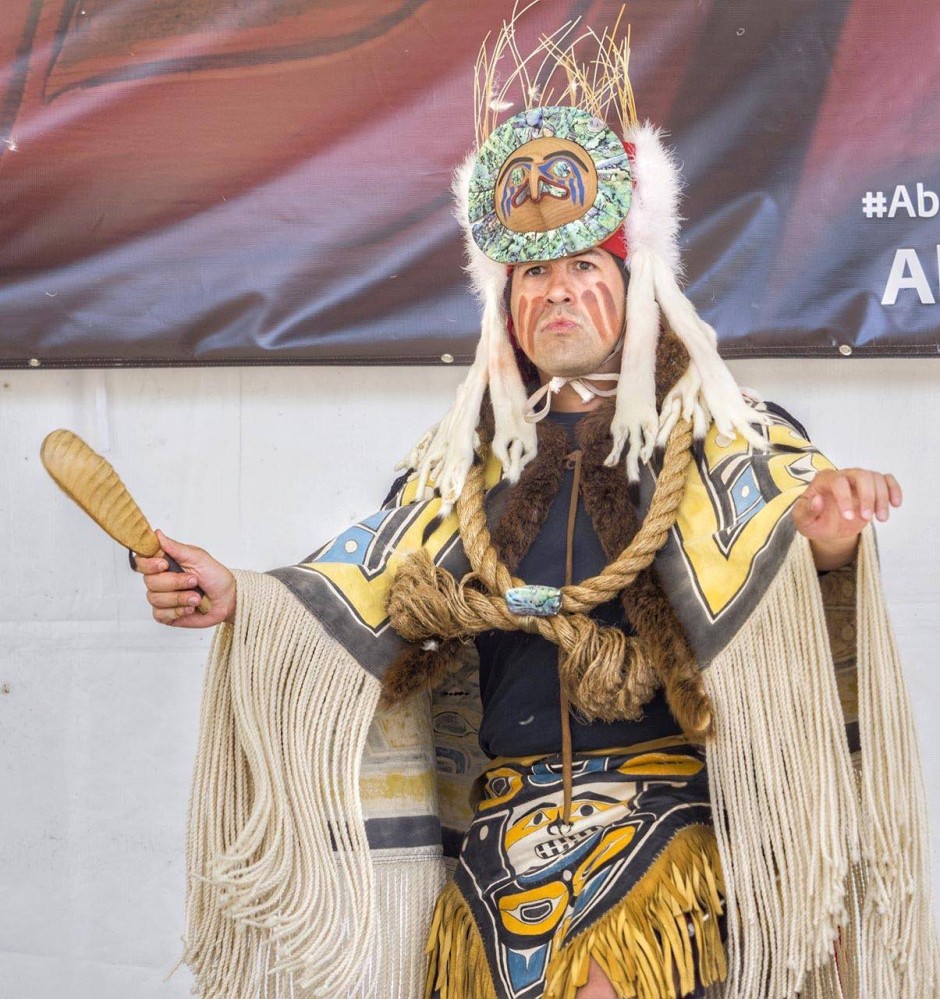 Andy Everson, artist and dancer sprinkles eagle down as he presents the ‘peace dance’ with the Le-La-La Dancers from Kwakwaka’wakw First Nation. 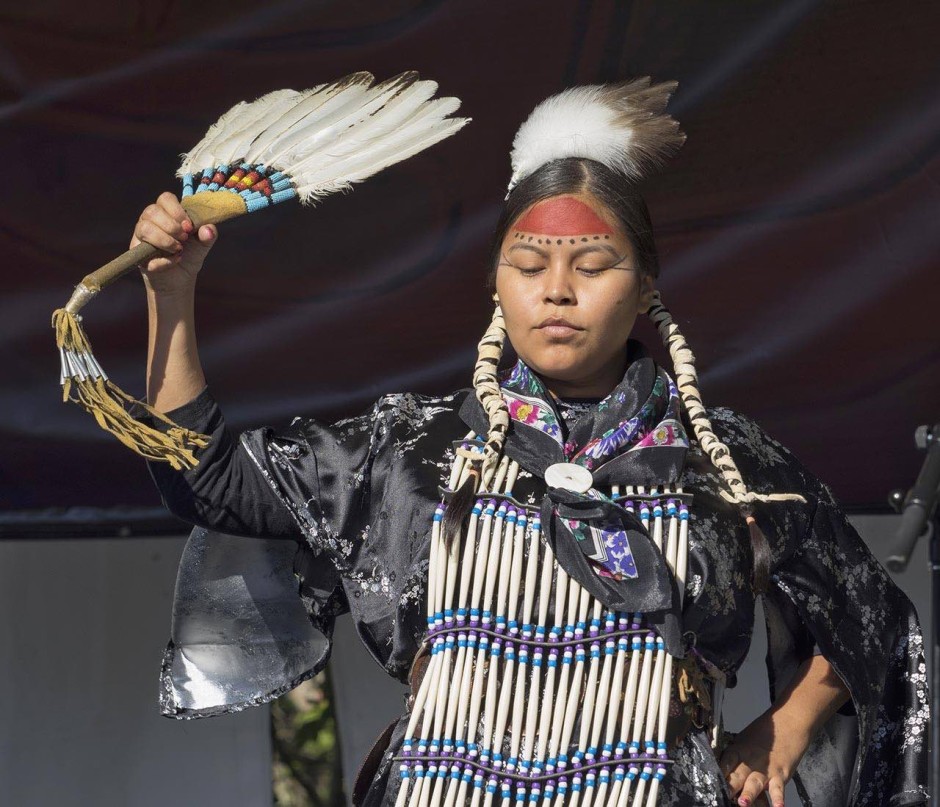 A dancer and singer with Native Thunder Productions performs the graceful women’s traditional dance. She raises the eagle feather fan to an honor beat (loud beats during a song) to show respect and honor for the drum and traditionally, for the men as they went off to battle. She dances in time with the drumbeat. 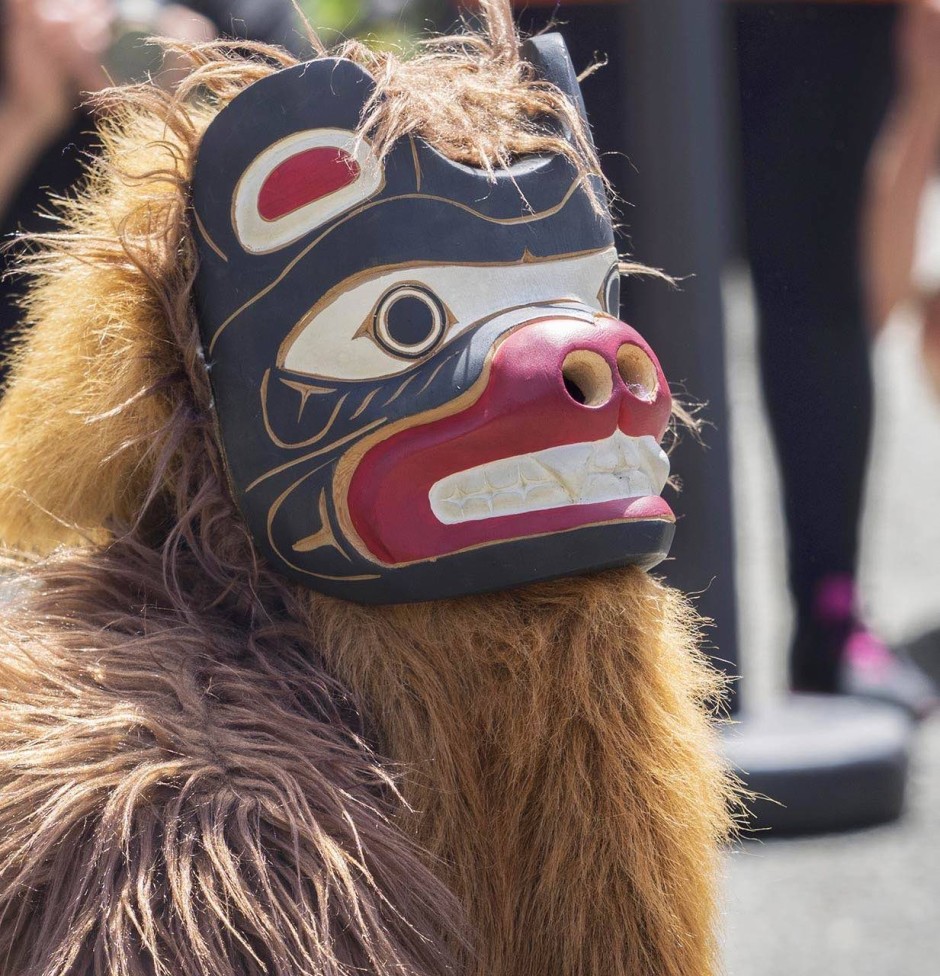 The Nan (grizzly bear) dance is performed by the Le-La-Dancers of Kwakwaka’wakw First Nation from northern Vancouver Island. They have a passion for all animals and it comes through as they perform several dances with a variety of masks that represent animals such as the raven, bear and orca whale. They also perform a Sapa dance, meaning echo, a transformation dance that starts with a human face then changes to a bear, raven and eagle. The bear is the strength and power of the woods. George Taylor, director of the group said, “We must protect all animals, we do not ever want to see our animals extinct.” 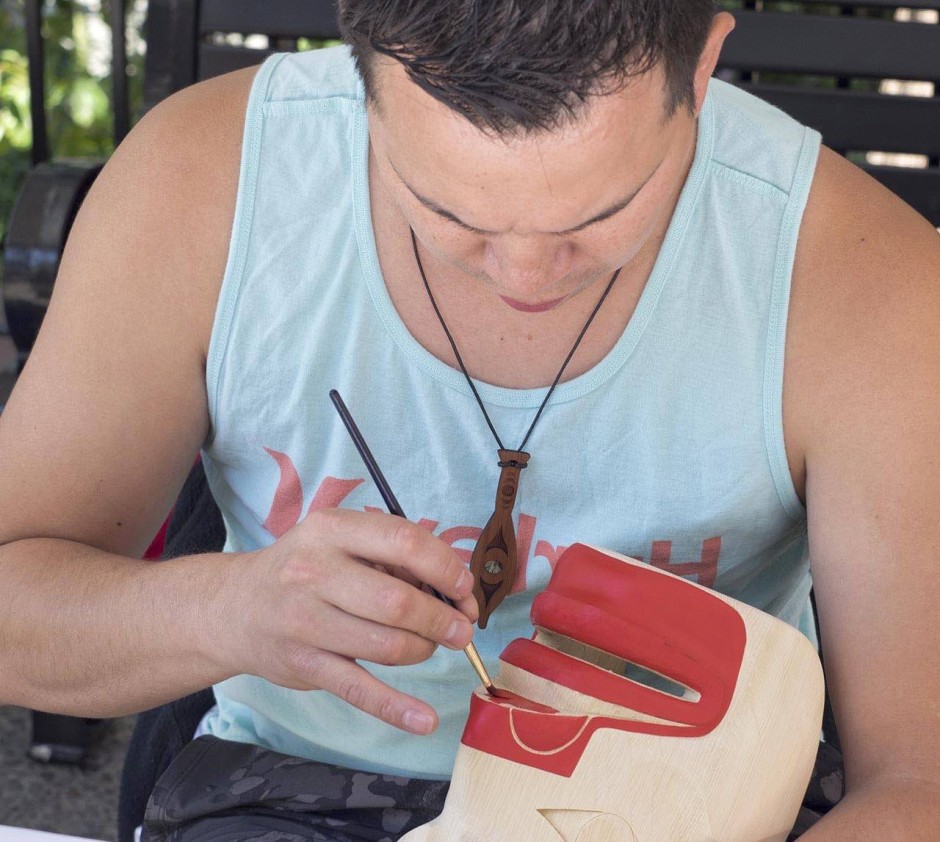 Kelly Robinson of Nuu-chah-nulth and Nuxalk First Nations paints a whale hunter mask. The Nuu-chah-nulth people are from the west coast of Vancouver Island and were one of the few Nations that hunted whales. Kelly comes from a family of carvers as his uncles and grandfathers also work with this art. 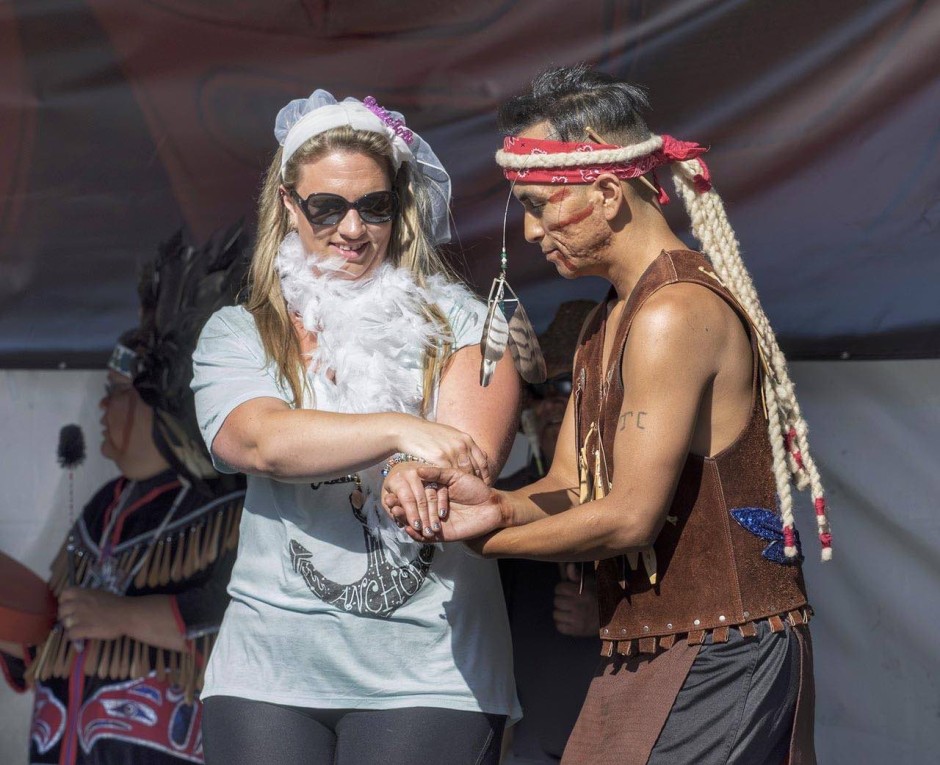 A woman celebrating her upcoming nuptials joins a member of the Tzinquaw Dancers group from the Cowichan First Nation during a friendship dance. This group presented songs and dances that were taught to them by their elders and have been passed down from generation to generation. 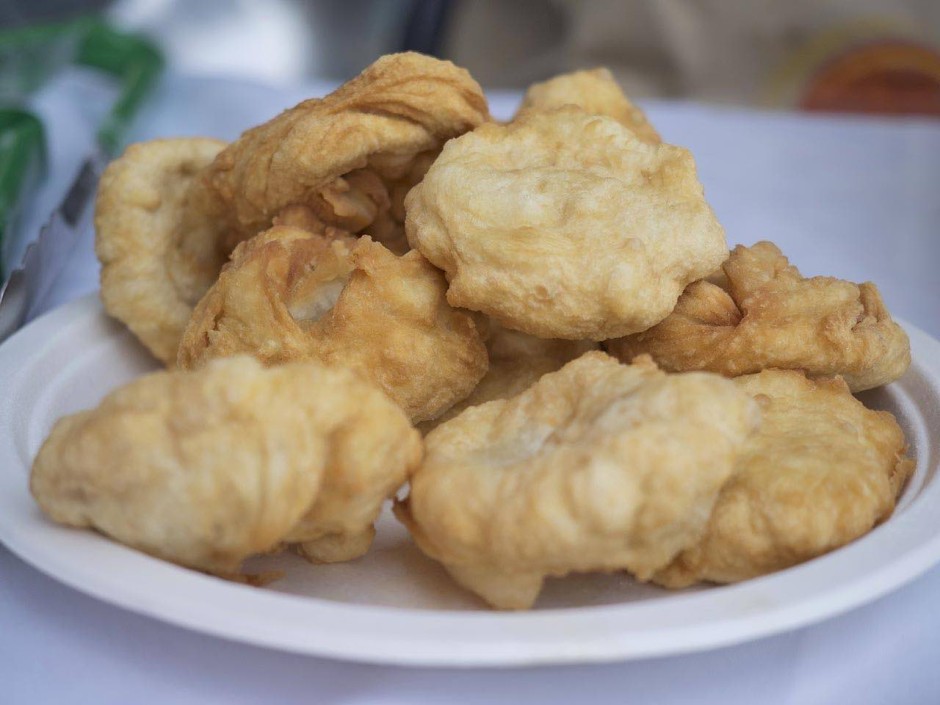 A plate of mini-fry bread also known as bannock is one of the items available on the menu of traditional food prepared by Annette Dick and a team of cooks from the Songhees First Nation. 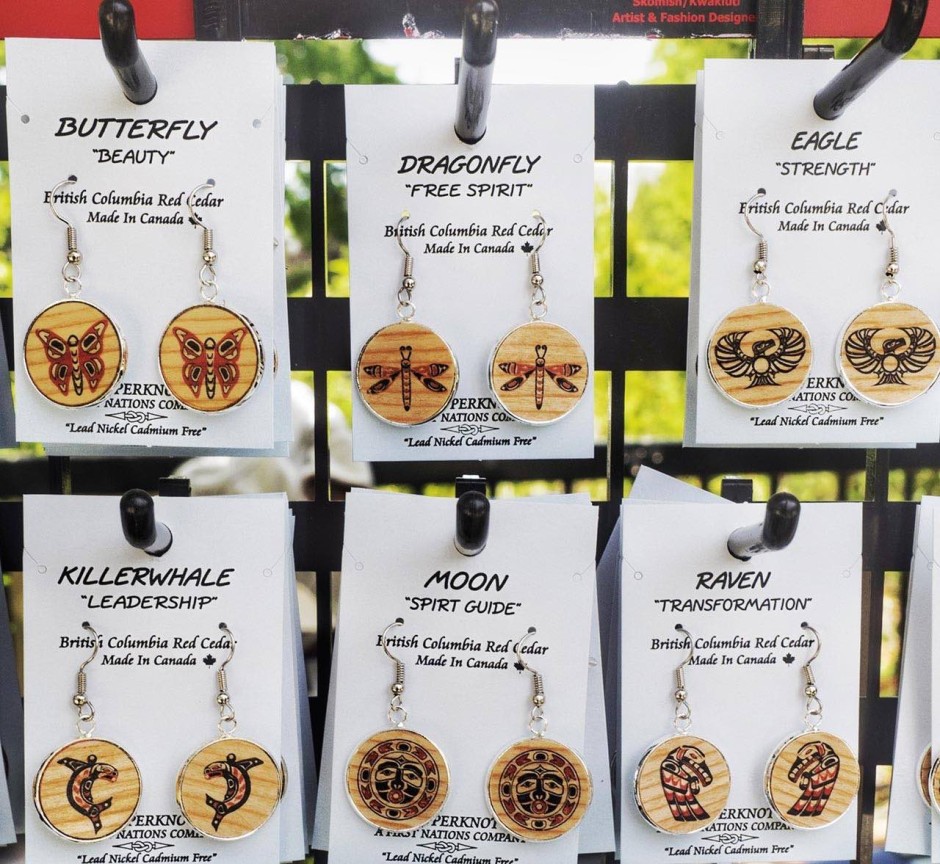 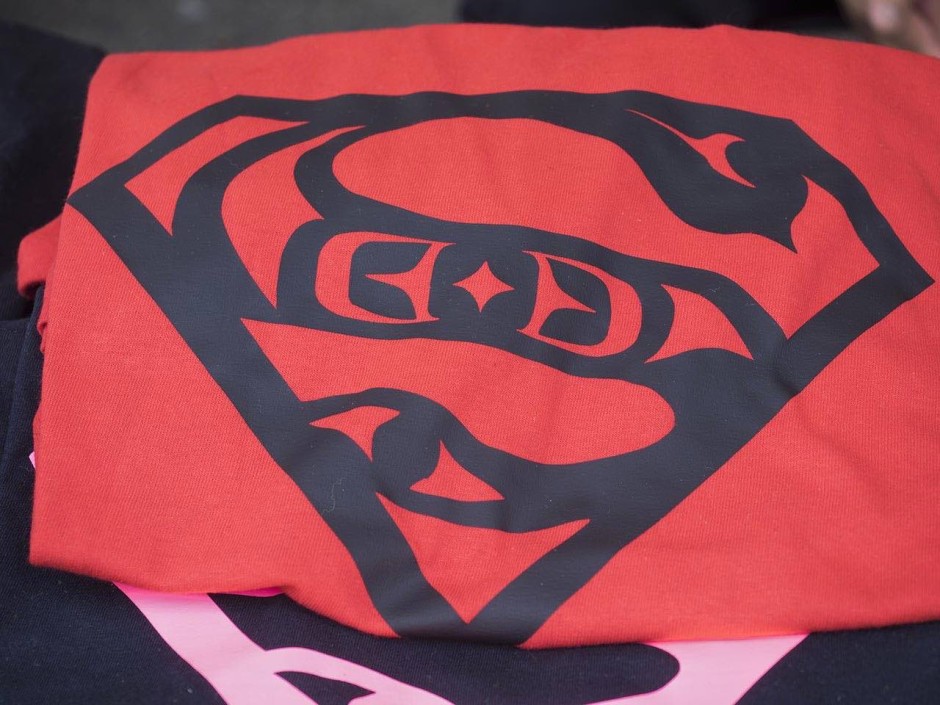 This t-shirt is the work of Craig Stephens of Wolf Pack Apparel from the Nisga’a First Nation. Currently, he offers custom First Nations styled clothing and has created 120 designs. He sells his creations online and at Aboriginal events in British Columbia, Alberta and Saskatchewan. 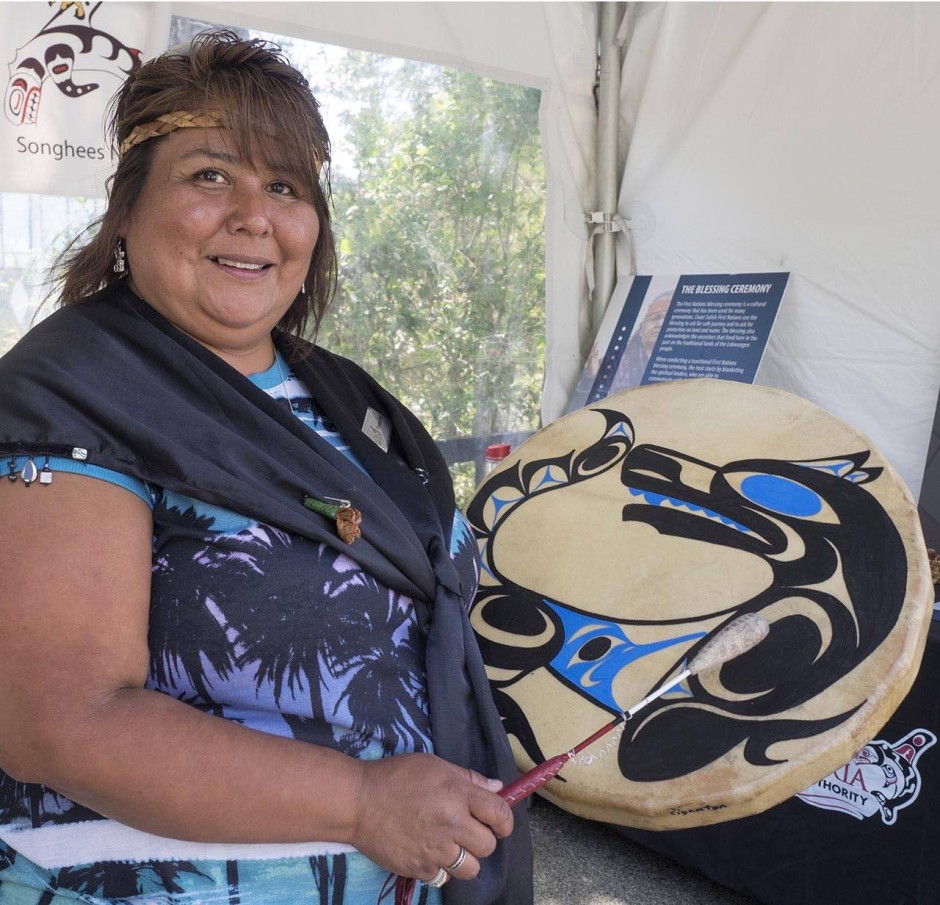 Florence Dick of the Songhees First Nation shows off a drum bearing a wolf, the clan symbol of the Songhees people. The festival took place on the shared traditional territory of the Esquimalt and Songhees Nations traditionally known as Lekwungen. Drum making demonstrations were available at this booth. 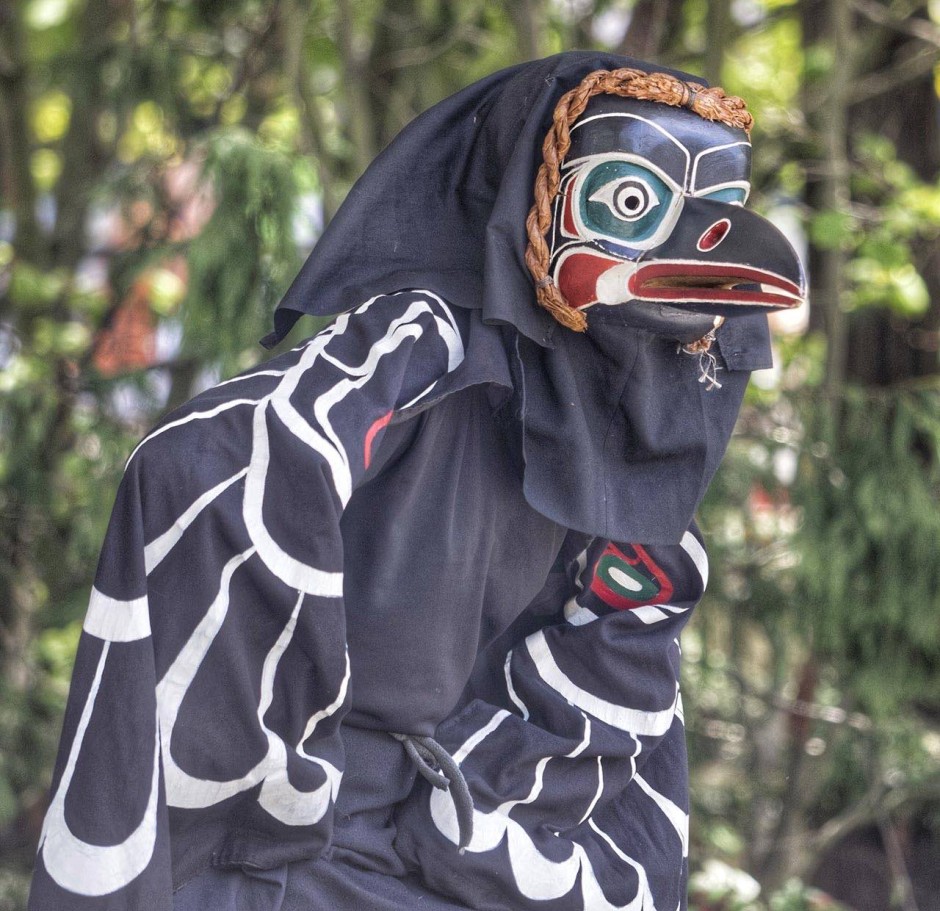 A Le-La-La dancer performs as a raven. The Le-La-La Dancers have been performing and sharing their culture locally and around the world for 27 years under the direction of George Me’las Taylor. 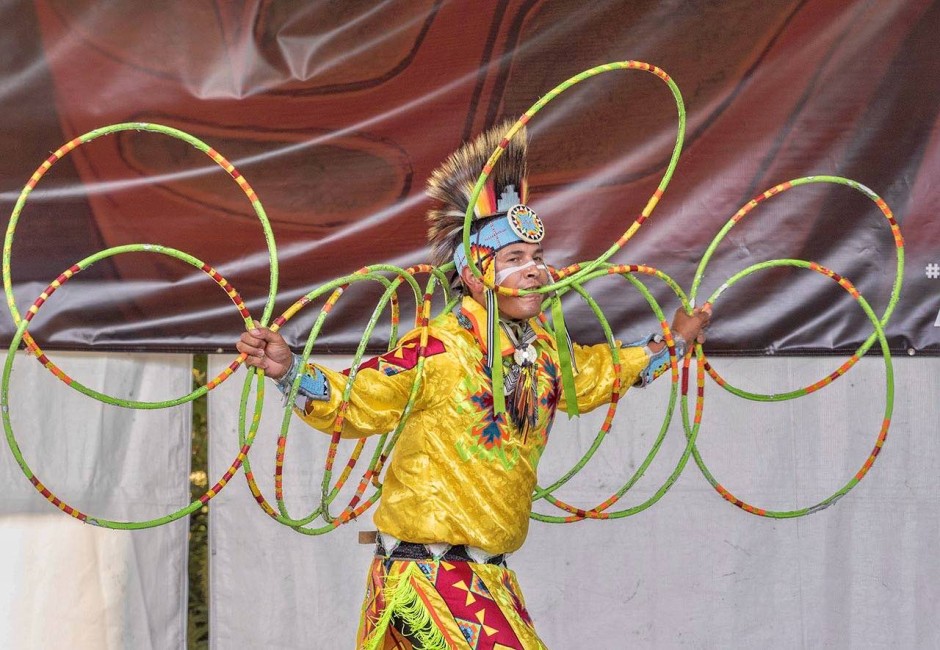 Three-time world champion hoop dancer, Alex Wells of Lil’wat Nation, shares a story through a performance of the hoop dance. He transforms into animals and shapes made with the hoops. 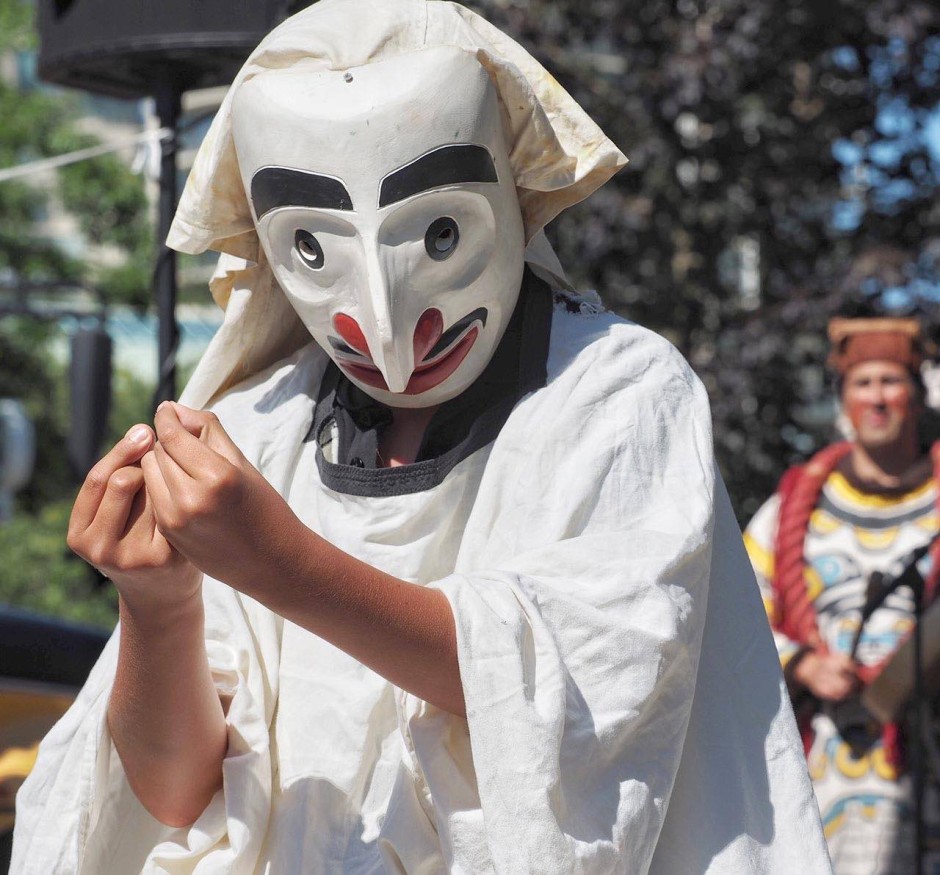 Humor was regularly displayed throughout the 3-day festival. The Sacred Snot Dance, performed by members of the Le-La-La Dancers illustrated that perfectly.

[Note: Andrea was a guest of Tourism Victoria.]

Tagged
Festivals Student Work Canada
What did you think of this story?
Meh
Good
Awesome