1. It’s a lot less flat than you probably think it is.

There are actually more mountain ranges here than in any other state. In addition to its 314 named ranges, Nevada has at least 100 more that cut through the desert anonymously, with a total of 40 peaks that exceed 10,000 feet in elevation (the highest of which is

If you’ve never done it, check out Nevada on Google Maps with the “Terrain” layer turned on. It’s a trip.

2. And where there are mountains, there’s mountain biking.

Nevada has tons of trails covering thousands of miles. Choose from everything from fire-road routes to challenging rocky downhill, like the 35 miles of desert singletrack in

Or go big — just bike the entire damn state. The

3. Nevada’s all about adventure sports. 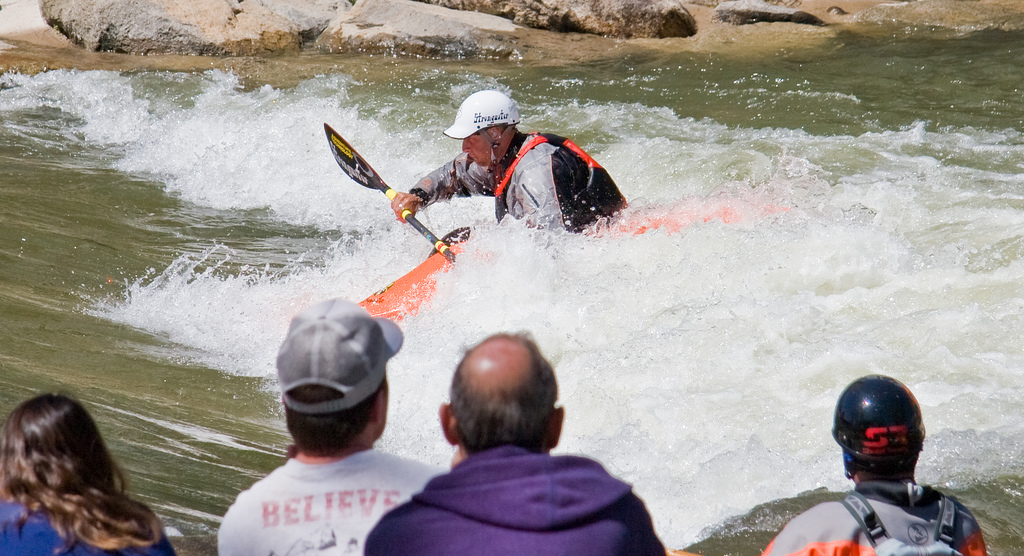 Playboating on the Truckee River in downtown Reno. Photo courtesy of TravelNevada

If cycling isn’t your thing, there are about a billion other ways to get adventurous in Nevada. Any city in the state can serve as an ideal base camp for your weekend warrior needs: Minden’s great for glider rides over the Carson Valley, Elko’s your stop for

Opportunities for boating and fishing can be found close to Reno at Pyramid Lake, but if you don’t feel like getting out of town to get on the water, you can even do some whitewater kayaking right in downtown Reno’s

This isn’t a surprise in any way to Nevadans, who’ve known forever that yes, it’s real, it’s out there in the desert, and the closest you’re gonna get to an an alien encounter is purchasing a souvenir inflatable alien or shot glass in the nearby town of Rachel. Thanks to tons of armed guards who’ll literally chase you away if you come too close, there’s unfortunately not much visible from the outside. Unless you wait until dark, that is: the 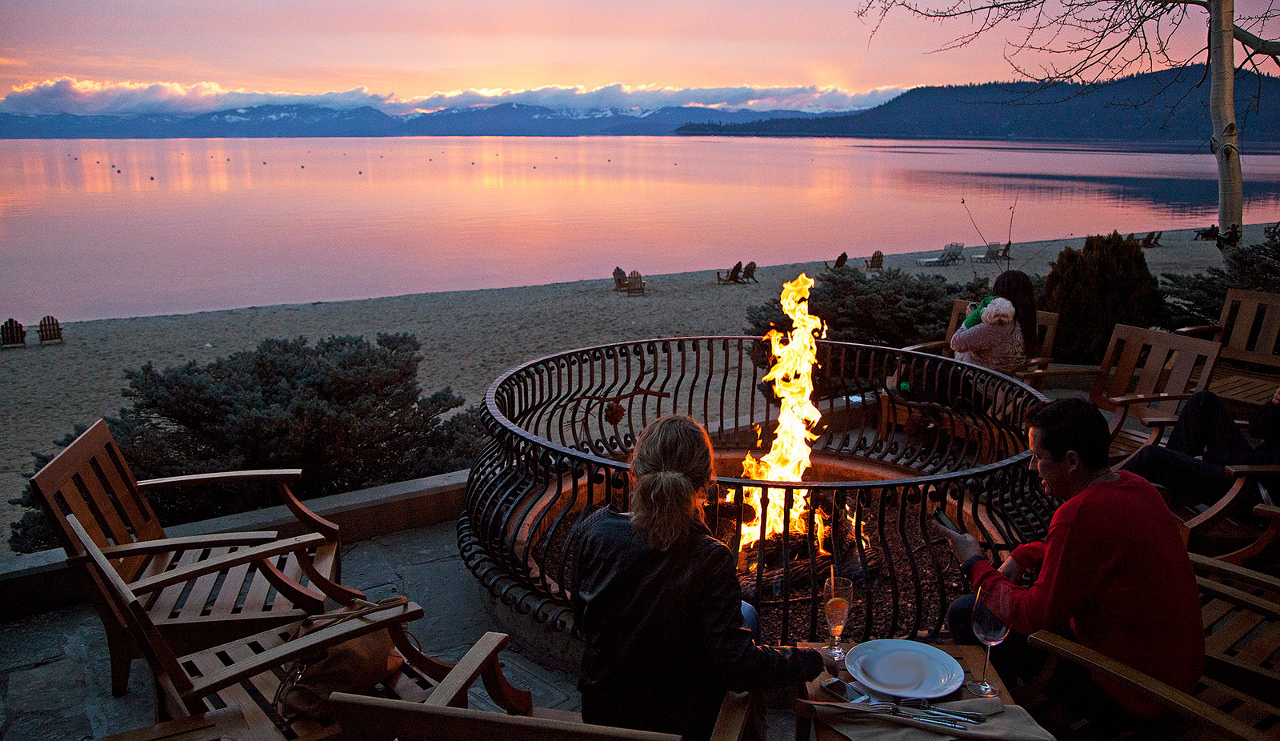 Outside at the Lone Eagle Grille in Incline Village, NV. Photo courtesy of TravelNevada

Aside from the Las Vegas Strip, where celebrity chefs throw it down nightly, Nevada’s culinary scene has been quietly experiencing a renaissance of farm-to-table, locally minded indie restaurants, festivals, and food trucks.

6. And there’s some seriously fine beer and liquor here, too.

Craft brewing in Nevada’s been on the rise since the legalization of brewpubs in the early 1990s. Now, with close to 40 breweries and brewpubs, and new ones popping up every day in almost every part of the state, no more excuses — you can do better. Next time you’re in Las Vegas, leave the silver bullet at the slot machine and veer off the Strip to visit

It’s not just the craft beer scene that’s experiencing a resurgence, either. Thanks to some recent changes in legislation, Nevada’s distilleries are also thriving. And here, they take drinking local seriously. To be considered “craft,” distillers need to produce tiny batches of booze — no more than 10,000 per year (to put that in perspective, big name-brand liquors sell close to 70,000 cases a day), with at least 90% of their ingredients sourced from within the state. Nobody takes this rule to heart more than

Herds of wild horses have been common in Nevada since 1885. The Bureau of Land Management estimates that there are approximately 25,000 wild horses and burros in the state — that’s about half of the entire country’s wild horse population. They’re protected at the state level, with herds monitored in every single region of Nevada. The animals are so numerous you can easily spot large bands of them just about anywhere you want to venture. The most colorful herds are in the Great Basin Desert and other northwestern areas, where you might even see a rare Curly horse if you’re lucky.

Or just take a drive on Highway 50 out of Carson City, and keep your eyes peeled for the numerous herds that like to graze and run through the sagebrush along the hills by the highway. The Virginia Highlands near Virginia City are another likely spot, though the herds there aren’t managed by BLM, so they’re removed if they become a nuisance (translation: Don’t feed the wild horses).

My 4th-grade California education was a lie: Nevada yields way more gold than California. In fact, Nevada produces 80% of all the gold mined in the country today, and actually ranks among the top national producers in the world. You can still find sizable nuggets in every county of the state with nothing more than a gold pan, a lucky stream or river, and disciplined, monk-like patience.

For a more action-packed trip back in time, visit

In addition to a handful of chair-spinning ski mountains, Nevada has some truly epic backcountry. Read all about one skier’s experience in 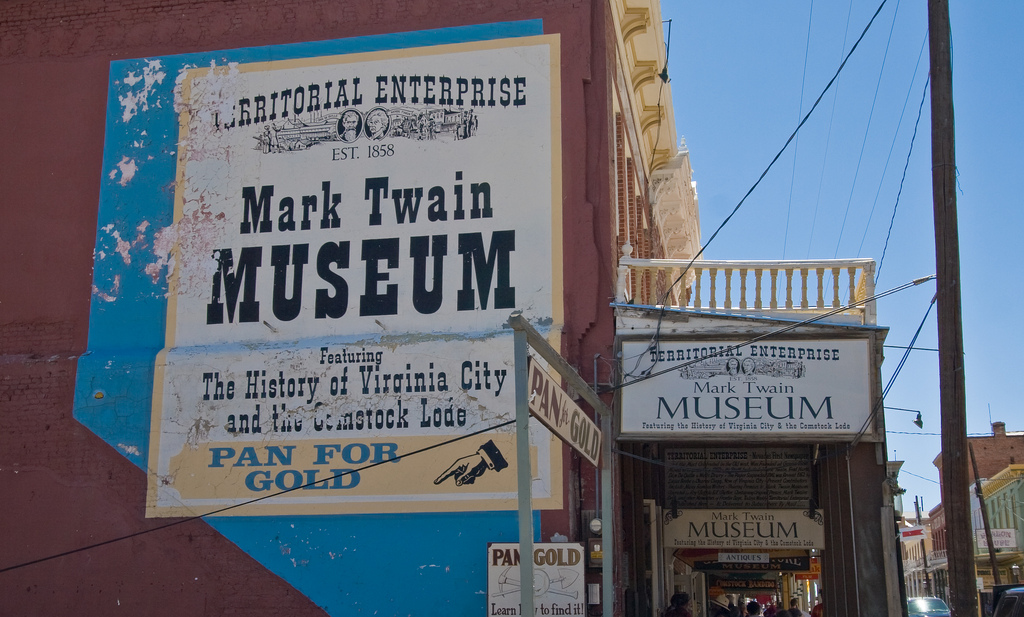 In 1861, a young Samuel Clemens arrived in Virginia City to try his hand at prospecting. After spending a year attempting to find work in the mines, he eventually was hired and got his start as a feature writer for the Virginia City Territorial Enterprise. As his coverage of the bustling frontier mining town grew, Clemens adopted a pen name: Mark Twain.

Way out in the

12. Nevada has some of the best rock climbing in the US. 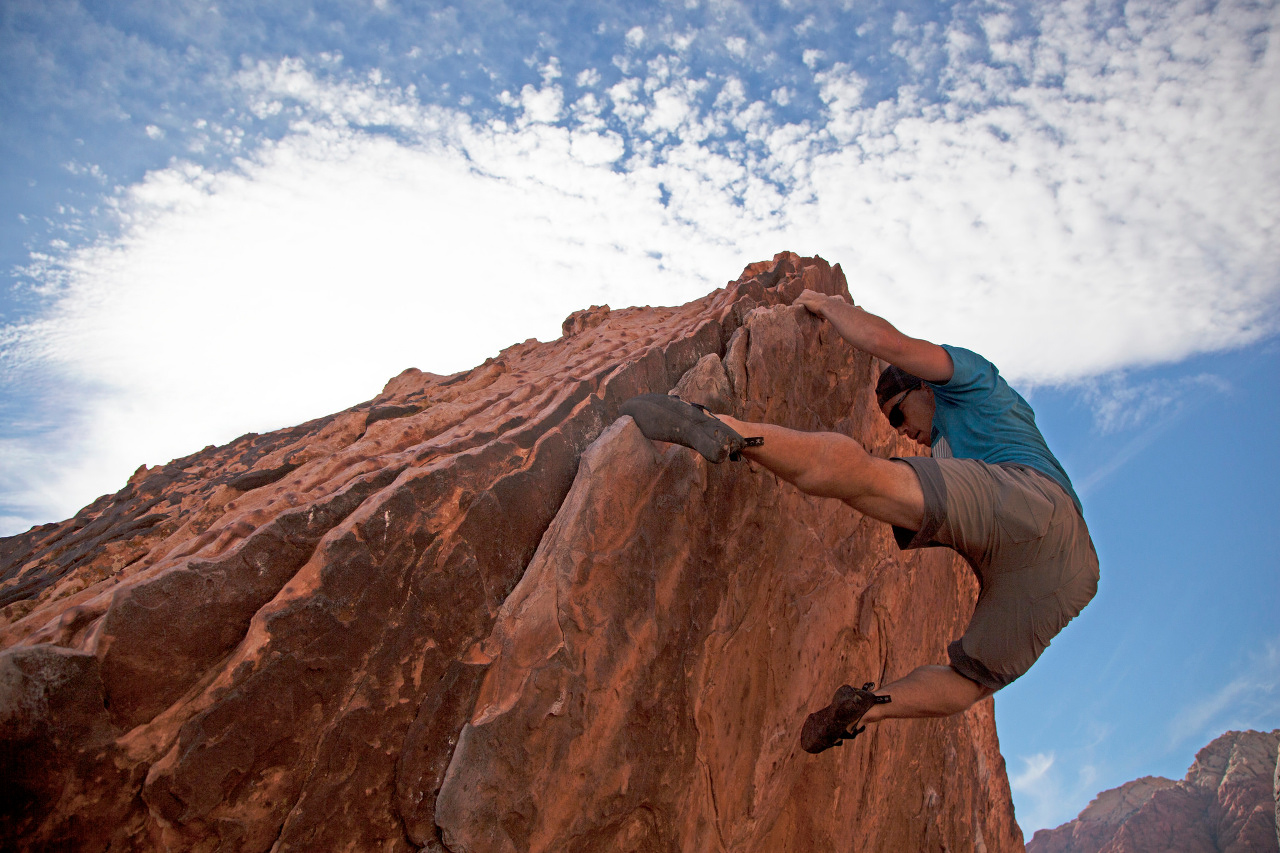 True to Nevada’s pioneering spirit, by the time 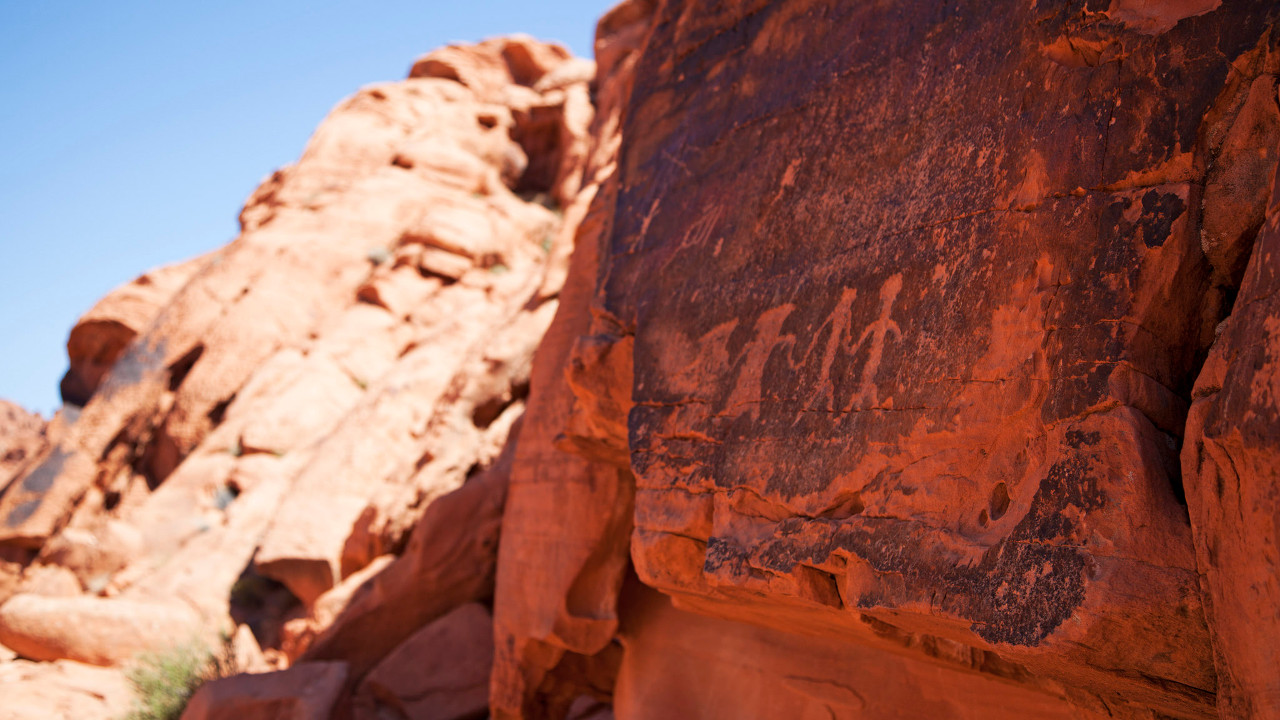 Nevada’s basically covered in ancient graffiti, some of which dates back as far as 10,500 to 14,800 years. Winnemucca Lake, just northeast of Reno, is the site of the oldest known petroglyphs in North America, where geometric patterns and tree shapes, some as big as three feet in width, are carved into soft limestone boulders found in the dry lake bed.

14. It’s even more beautiful after dark.

While some might expect all of Nevada to light up after dark with neon and billboards, once you escape the brightness of Las Vegas and Reno you’ll find some of the darkest skies in the world. Thanks to vast expanses of cloud-free desert and dry air, there are more spots where you can stargaze in any direction than there are places with lights interfering with your naked-eye view of the Milky Way. 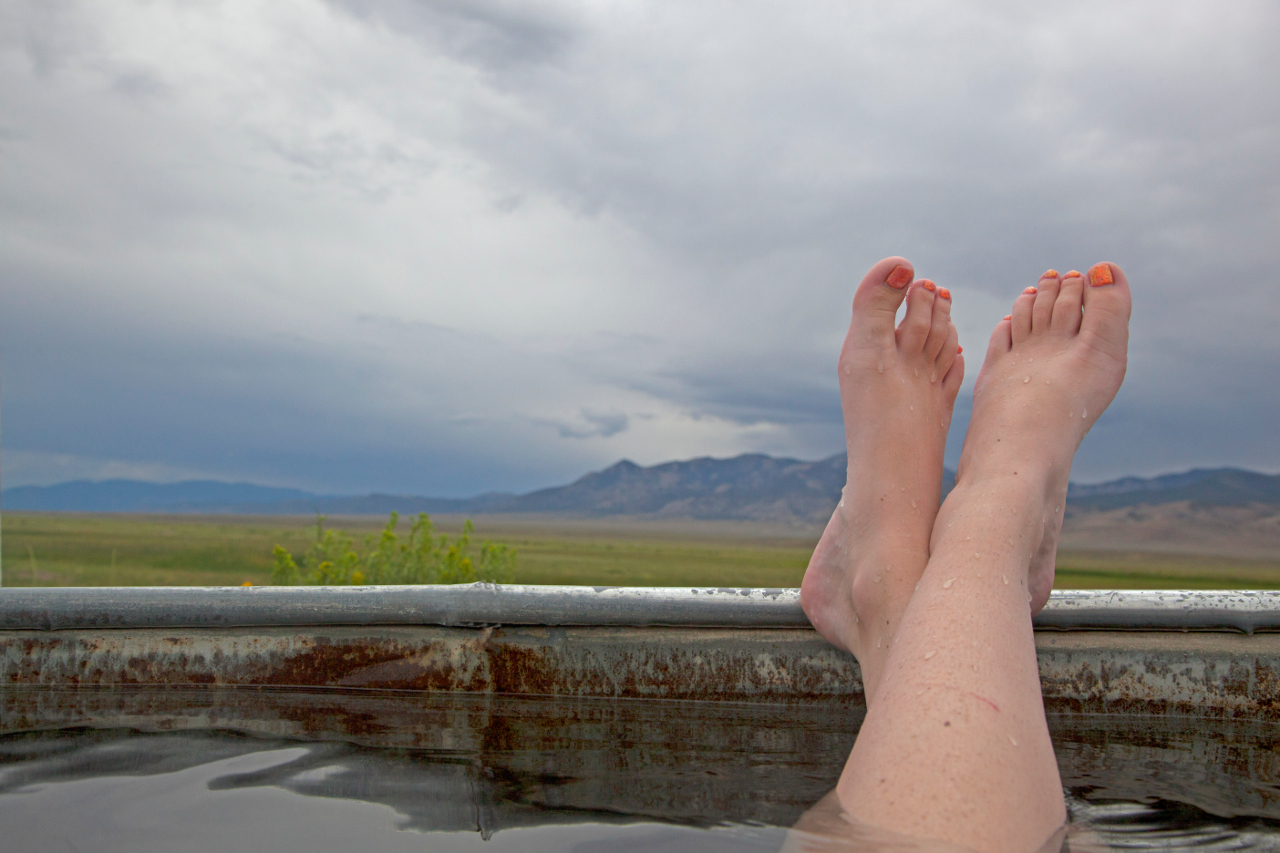 Image by Sydney Martinez, via

16. The largest intact ichthyosaur skeleton in the US was found in Nevada. 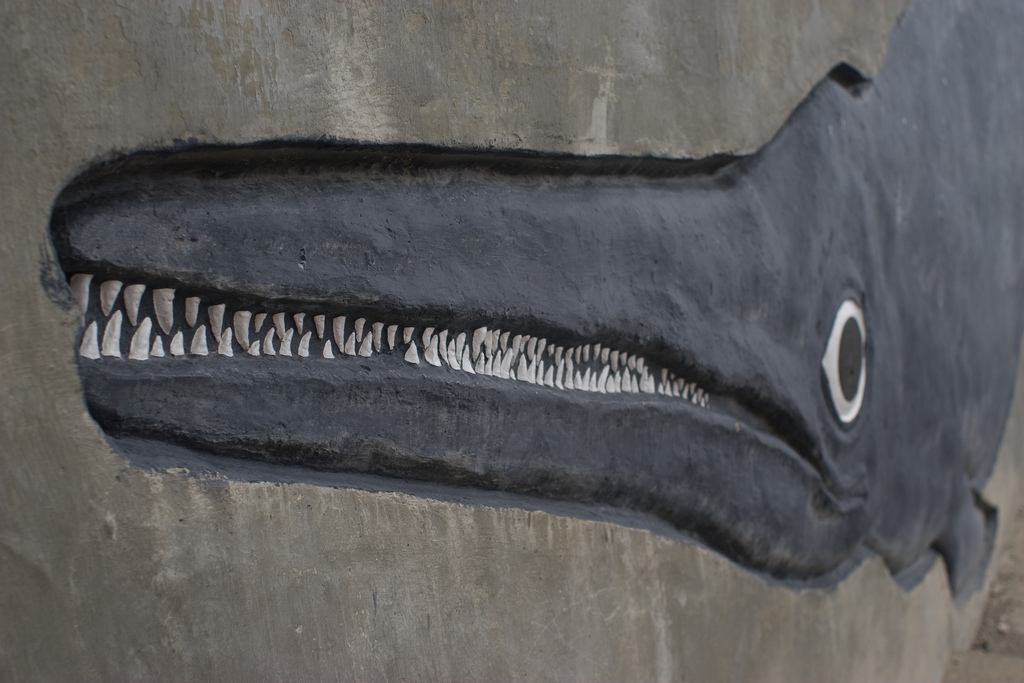 The bones of several ichthyosaurs, giant marine reptiles that lived in the Triassic period some 217 million years ago, were discovered in central Nevada by early miners. In 1928, they were finally recognized as belonging to the ichthyosaurus — and with some specimens measuring up to 50 feet in length, they remain some of the largest ever found. Today, you can view these fossils right where they were originally uncovered on a visit to

17. The only visitable tomb at Hoover Dam belongs to a dog. 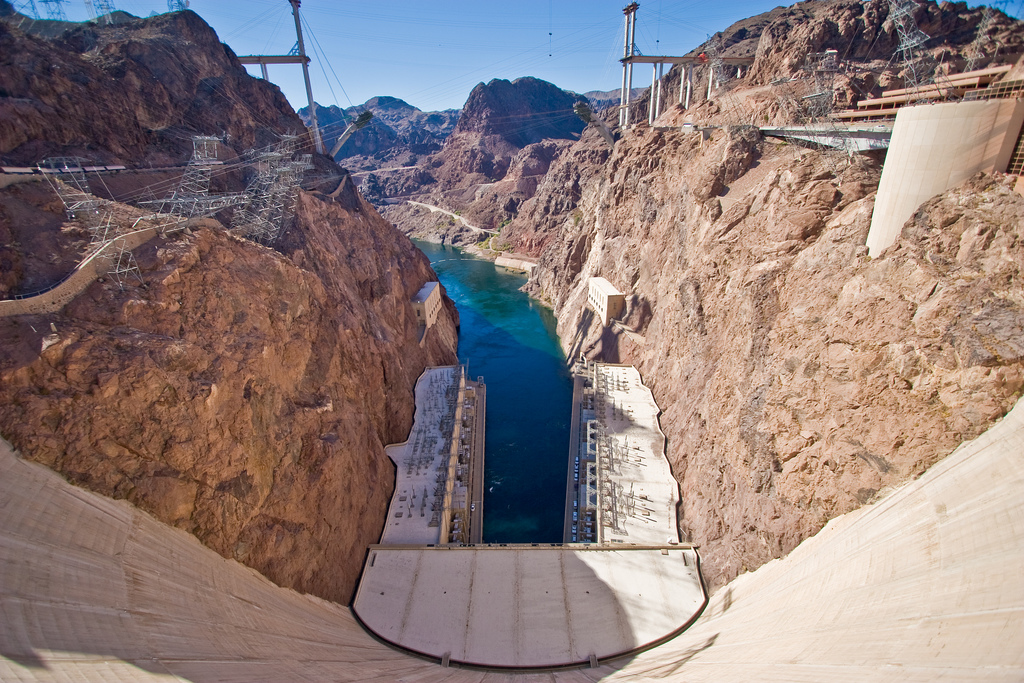 Despite the myth about hundreds of workers’ bodies being buried in the cement of the dam, the

The job of project mascot, however, wasn’t without risks. In 1941, after seeking shade from the sun beneath a work-site truck, he was struck and killed. Workers were so distraught by the event that they created his tomb and buried his body onsite that very same day.

18. You have to go underground to see the whole thing.

There’s a ton of Nevada to explore, from mountaintops to riverbeds, but if you want to see the entire state, you’ll have to seek what’s beneath the surface. One of the most decorated caves in the country, Lehman Caves in Great Basin National Park extends underground approximately two miles from the natural entrance. The formations here include stalactites, stalagmites, columns, flowstone, something called cave popcorn, and the apparently quite rare “shield” formations that visitors can explore on

The rocks in Nevada’s largest and oldest state park, the 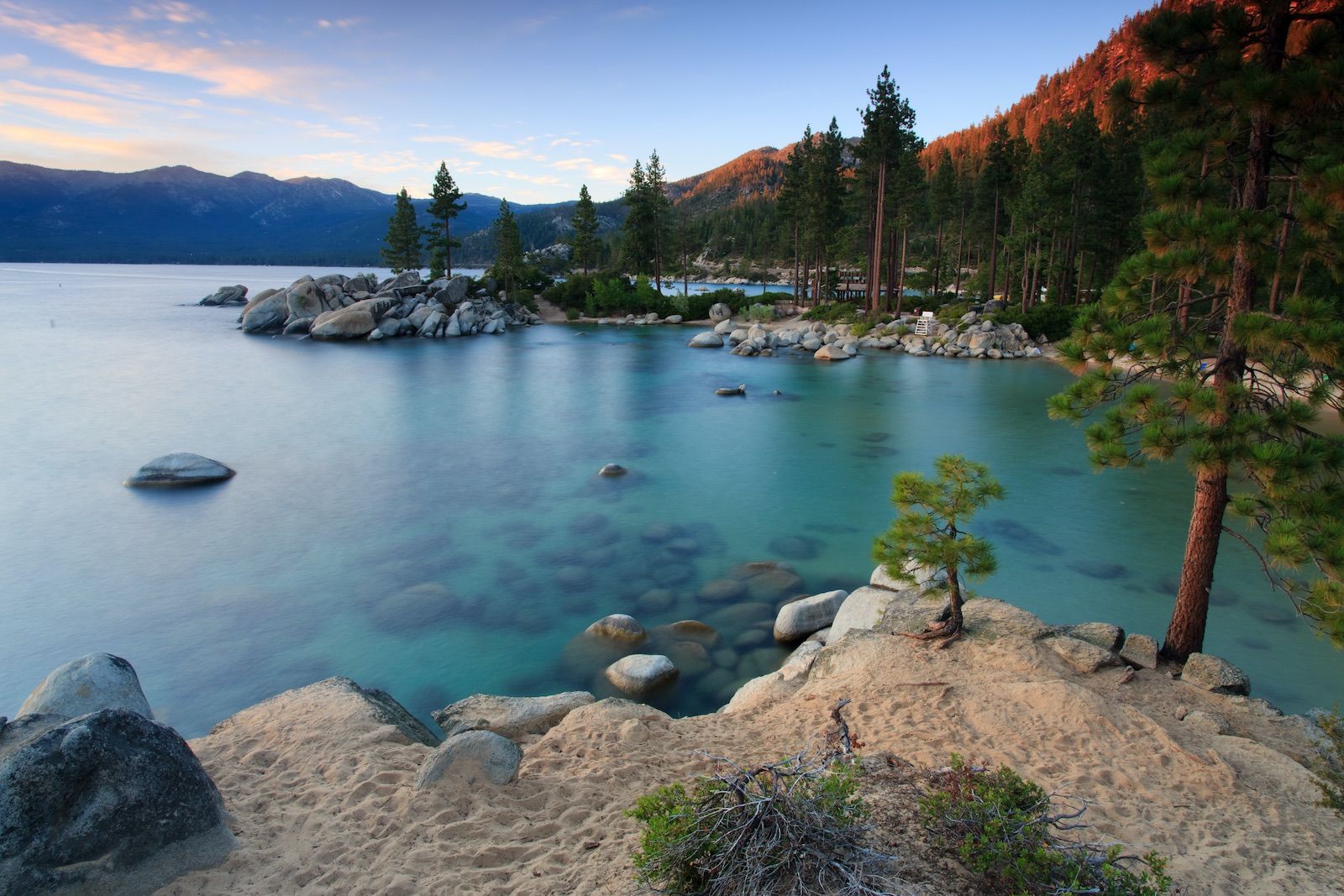 No joke, this is all in the same state. Bonsai Rock in Sand Harbor, located on the east side of Lake Tahoe, is one of the state’s most photographed locations. So much for whatever stereotypes you were holding onto about Nevada.