Editor’s note: The Canadian Rockies range from southwestern Alberta to southeastern BC, and move into the US over the borders of Idaho and Montana. At 3954m (12,972ft), Mt. Robson is the highest peak of this range (although not the tallest mountain in BC). The second highest peak of the Canadian Rockies is Mount Columbia in Alberta at 3747m (12,293ft). This is the tallest mountain in that province. Much of this area is protected by national and provincial parks and is a popular destination for outdoor adventurists in any season. Below, local photographer Dax Justin goes to some epic lengths to share what he’s seen in this wild location. 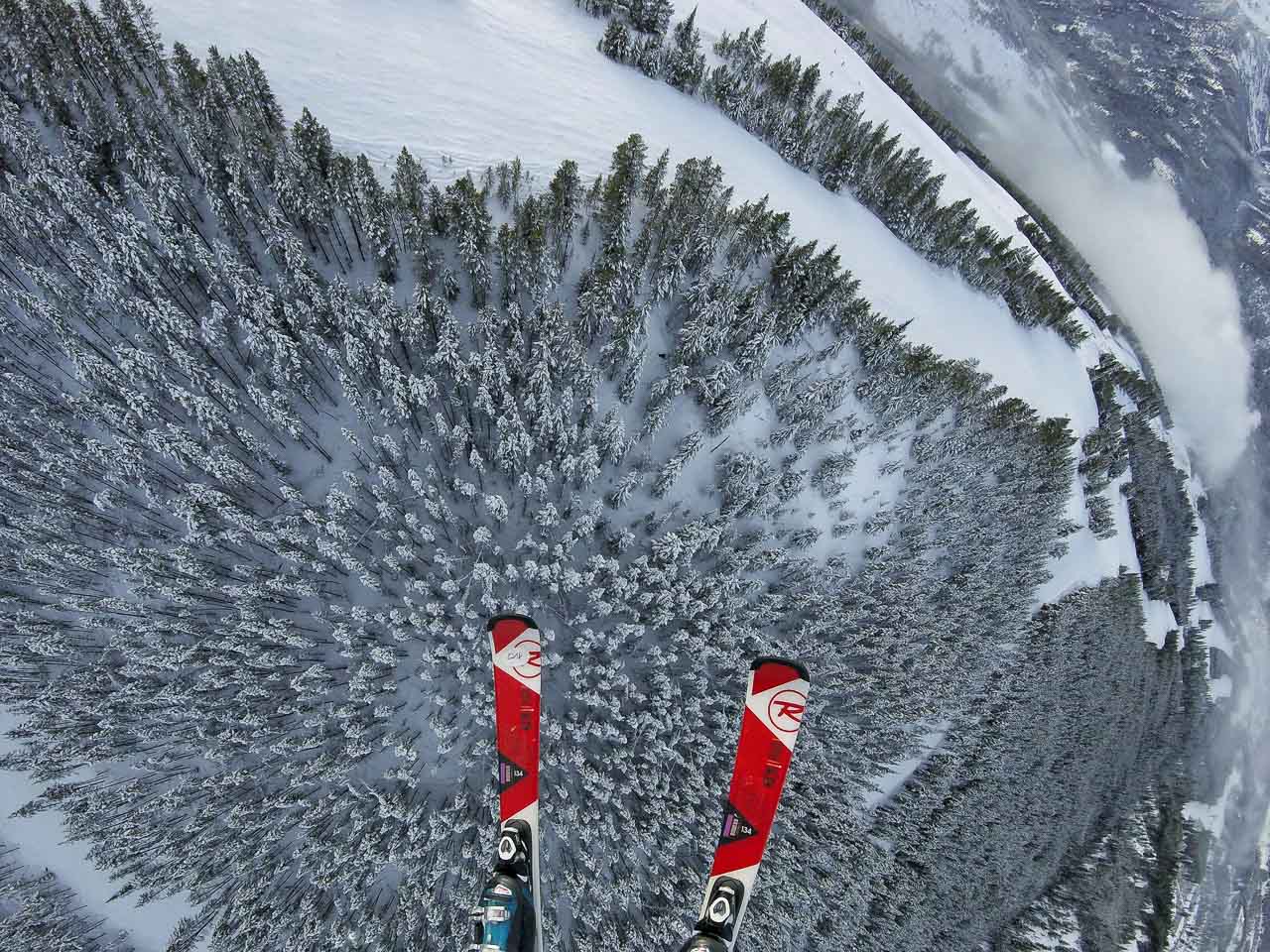 This is an image captured by my GoPro at 8,000ft above ground at Panorama Mountain, British Columbia, Canada. On my Columbia Valley Expedition in Winter 2015 the premise was to participate in athletic adventure activities. In this image I skied off the summit of Panorama Mountain and paraglided (for the first time) down to the base. I will never forget the snow-dusted trees on this exceptionally clear and calm day; the view was like nothing I had ever seen before. 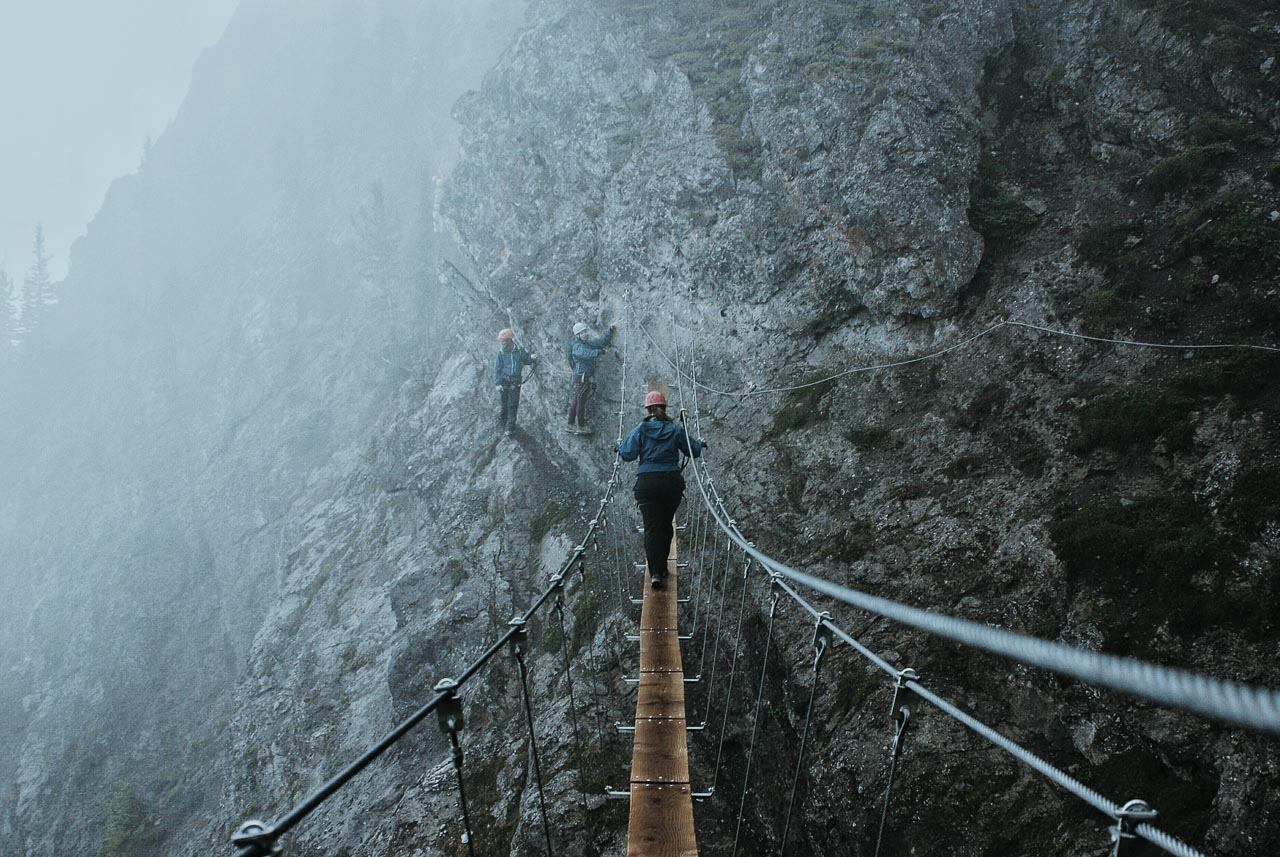 One of my first adventures in the outdoors took place on my S14 Expedition in 2014 when I decided to visit 14 places in Alberta that would make me "feel alive." This photo is from crossing the swaying suspension bridge on Mount Norquay's Via Ferrata climb. This was a guided, fixed-cable high-alpine climb that took us on a route up Mount Norquay in Banff National Park, Alberta, Canada. 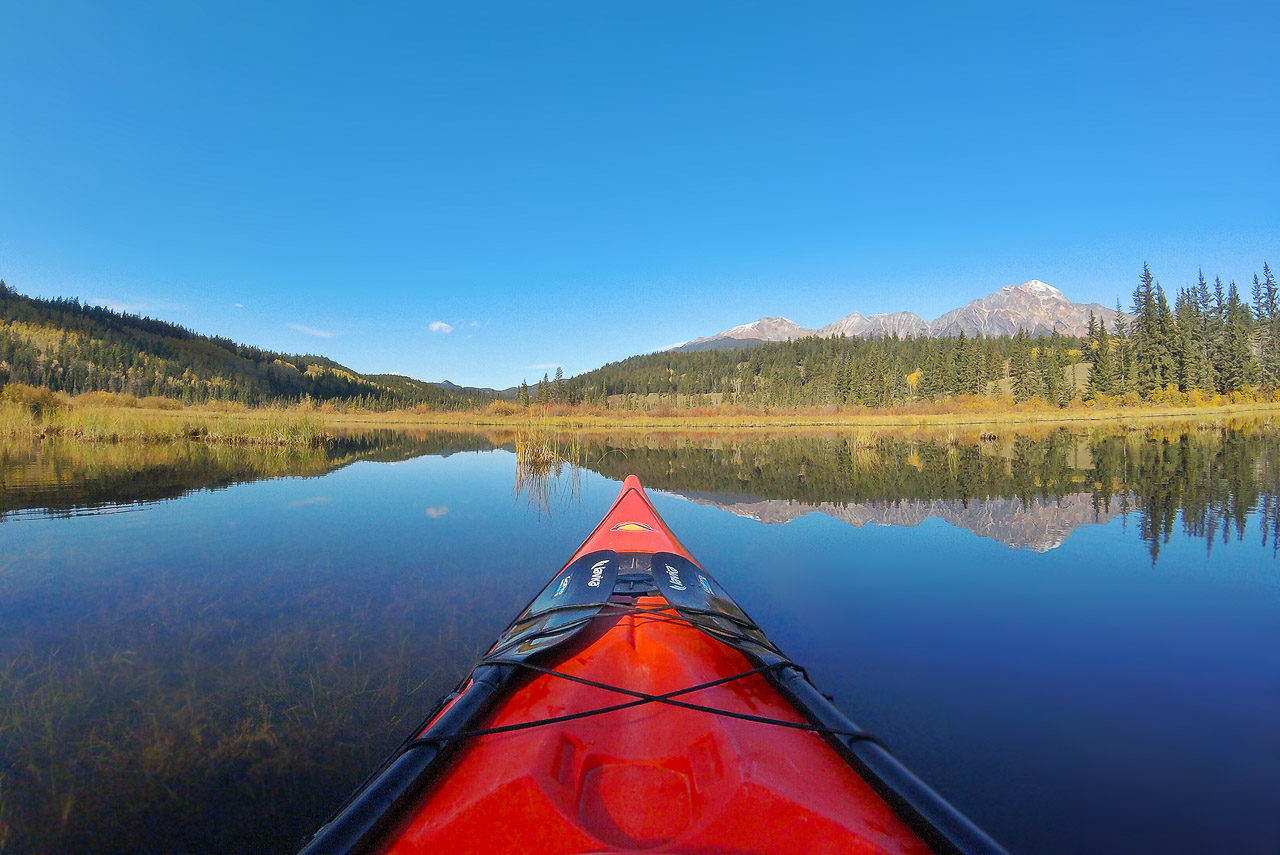 While visiting Jasper National Park in Alberta, Canada I had just picked up a kayak and was on the prowl for open waters. I came across Patricia Lake unexpectedly and seeing the lake's reflections while driving by I suddenly parked on the side of the road, unloaded the kayak, and was off on my first paddle. This was the day I learned there is something very meditative and profound about kayaking on calm waters. This shot is from a GoPro mounted on my chest. 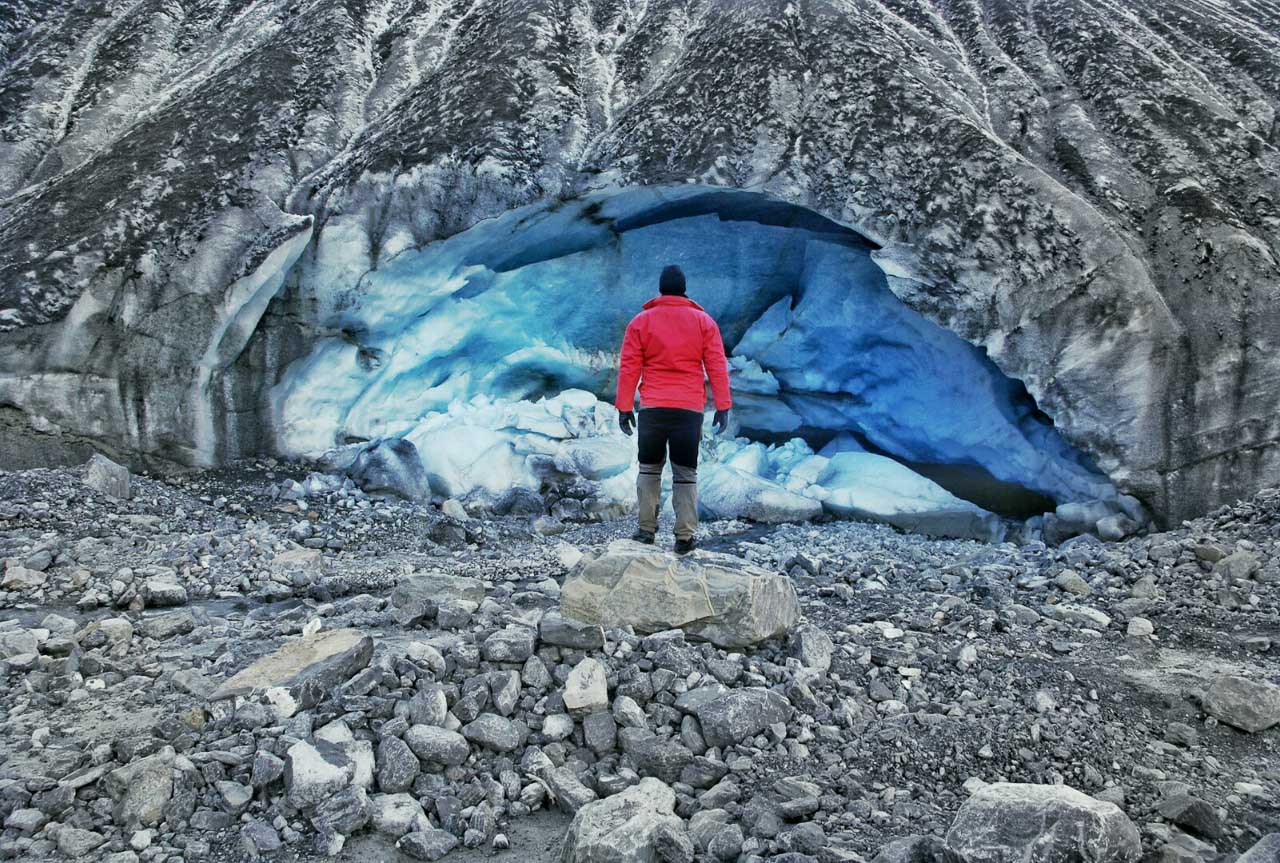 I visited Jasper National Park during the Summer months in 2015. On my final day while in the Columbia Icefields I was told there was an ice cave at the bottom of the glacier, and that it was inaccessible due to melting and the formation of a new river in front of the glacier. I trekked to the toe of the Athabasca Glacier and, blocked by the river, I could see just the top of the ice cave. I was determined to stand in front of my first ice cave so I planned a safe route through the icy river. I overcame the obstacles and for me this symbolizes that achievement. 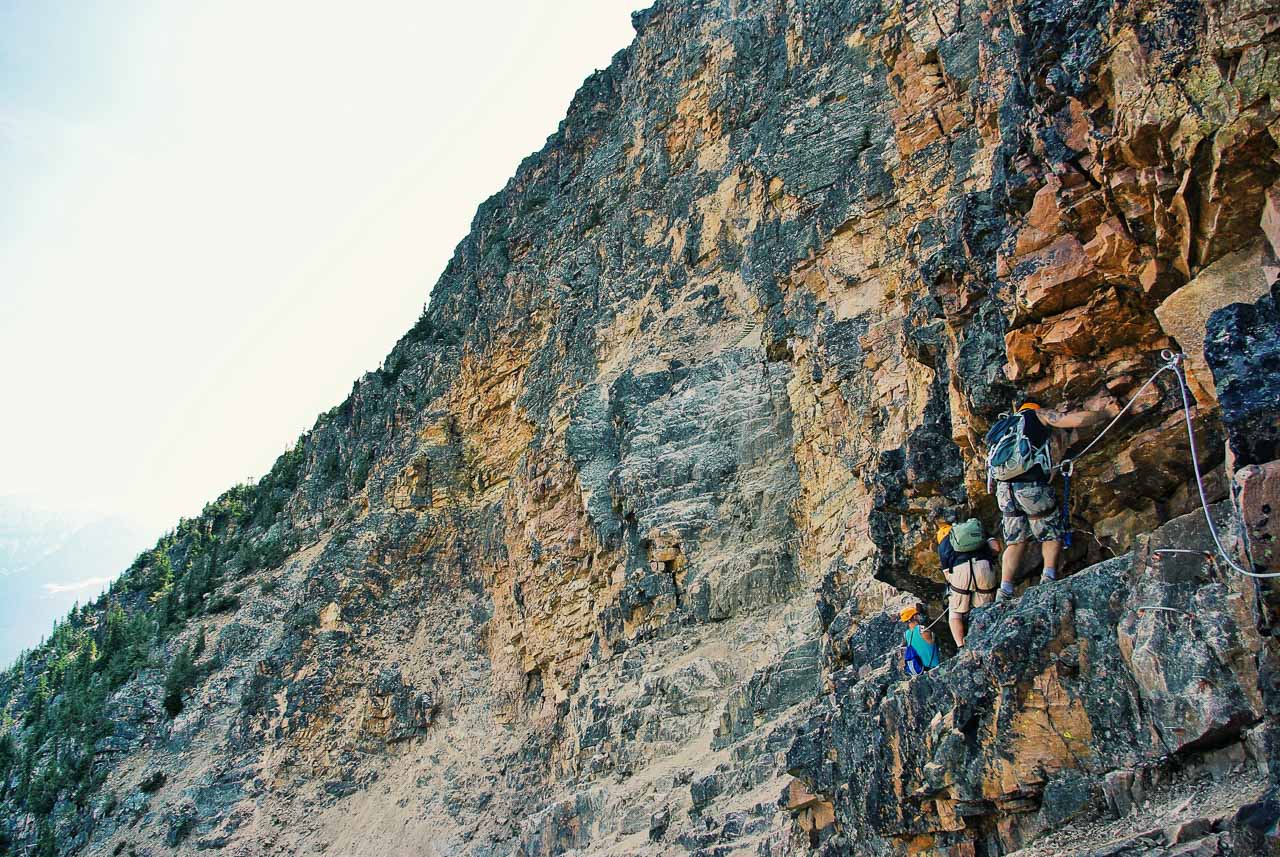 In the Summer of 2015 I wanted to do more adventurous mountain activities. I embarked on climbing the most exhilarating Via Ferrata (Italian for Iron Stairway) in Western Canada, found at Kicking Horse Mountain in Golden, British Columbia. I captured this image while we were tacking Terminator Peak's north face, just prior to summiting the mountain. 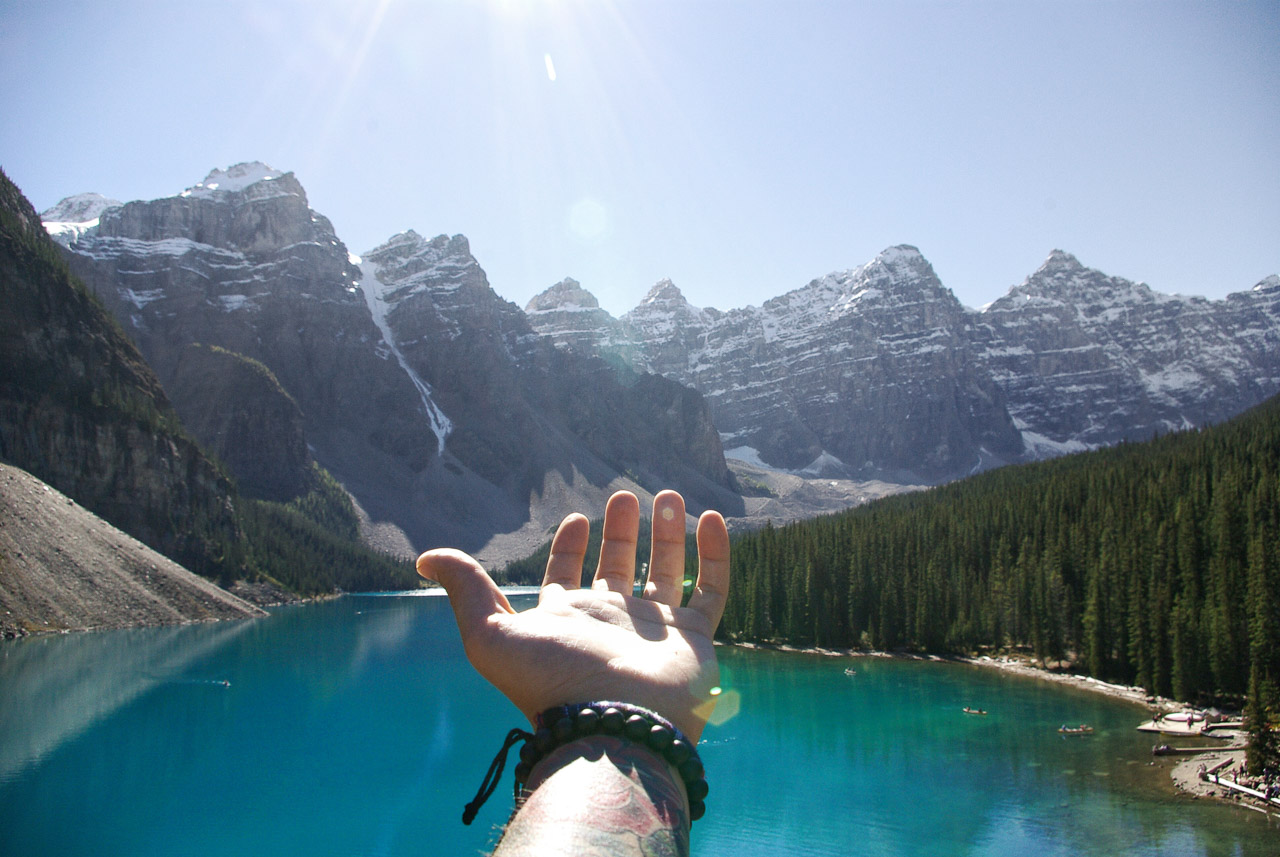 Moraine Lake is found in the Canadian Rockies within Banff National Park, Alberta and is said to be one of the most photographed places in all of Canada. This glacially-fed lake, when full, reflects a distinct shade of blue. The colour is due to the refraction of light off the rock flour deposited in the lake. This image was captured at the peak of the rockpile facing the lake. 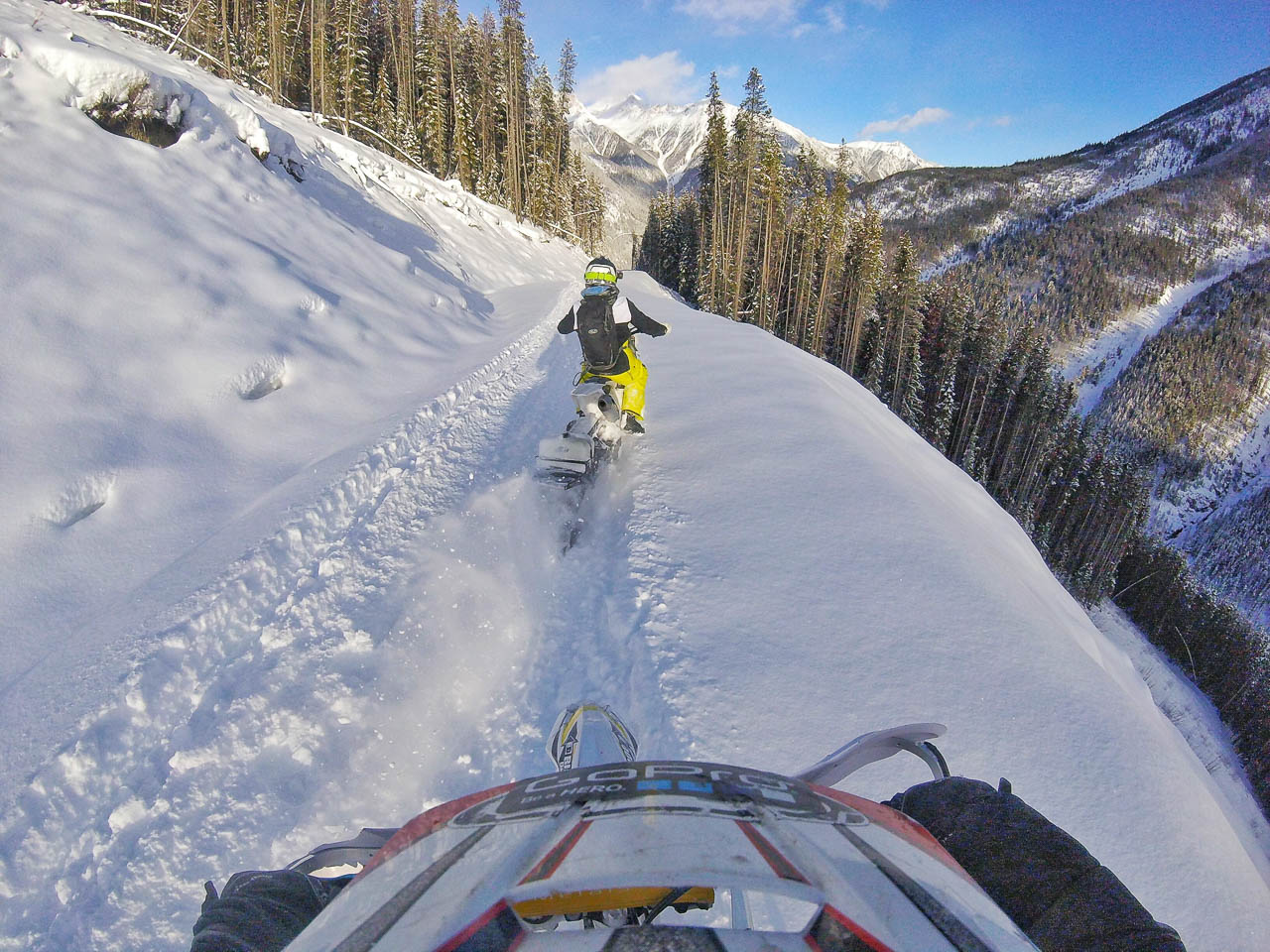 On my Columbia Valley Expedition in British Columbia, Canada I woke up one morning to find myself staring at a spontaneous activity -- "Snowbiking" -- in my itinerary. I didn't know what a snowbike was. On the previous day I was snowmobiling so I figured it would be a similar activity, or maybe a variation of fat tire biking. I was wrong. Snowbikes are basically a dirt bike, with a large ski replacing the front wheel, and a large high-powered track in the rear for traction in deep snow. I've never been on a dirt bike before, so this was all new to me. I jumped on a bike and after a quick tutorial from a former pro snowbiker we were off, heading up Brewer Mountain in the Purcell Mountains of the Columbia Valley. Being on a snowbike is like surfing on a cloud at very high speeds -- the power beneath the seat is unparalleled (my bike even had nitrous). This image is from riding the snow waves on the edge of the mountain, captured from my helmet-mounted GoPro. 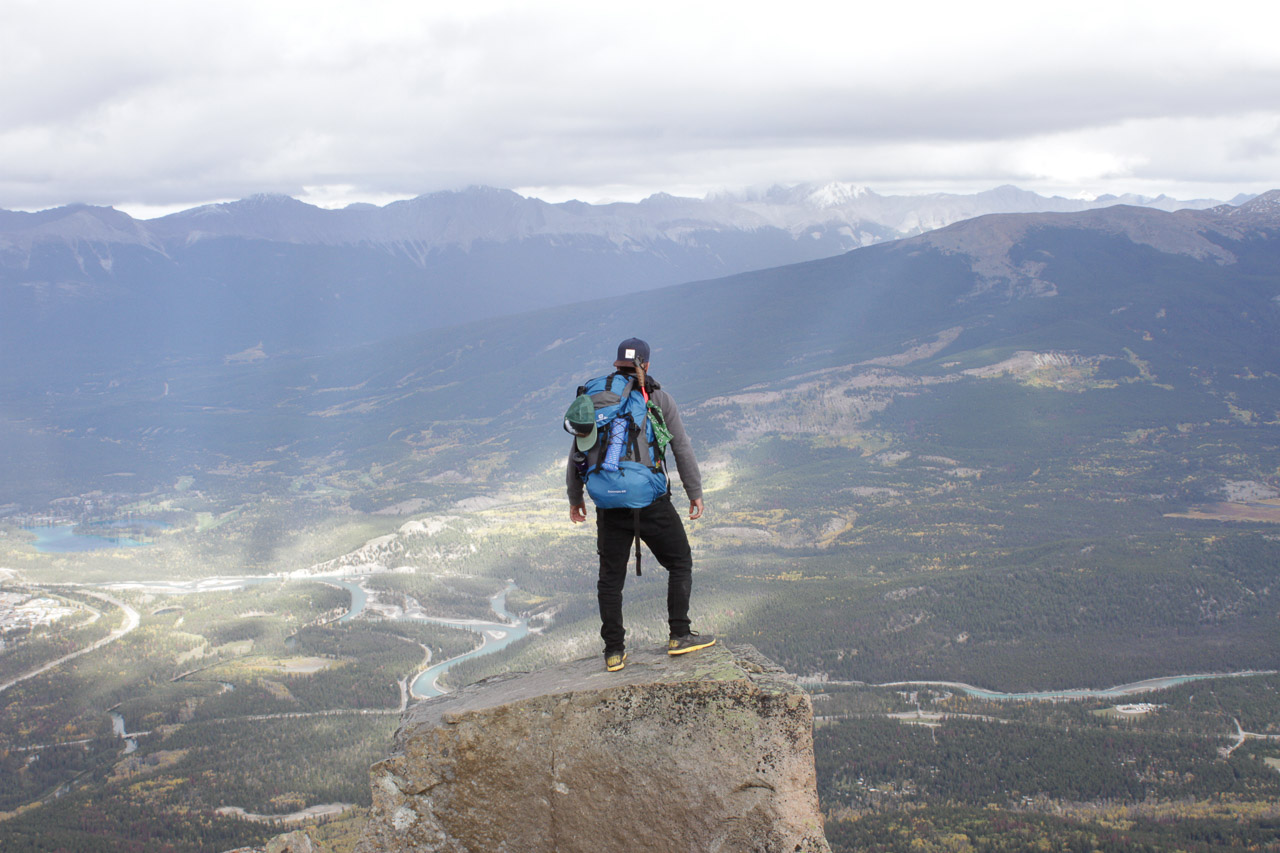 On my trip through Jasper National Park I decided to head up to the top of Whistler's Mountain. Jasper has the SkyTram, a gondola that takes visitors approximately 4278 ft up nearly to the peak of the mountain.

Tagged
Canada
What did you think of this story?
Meh
Good
Awesome

Everything you need to know about Quebec’s Vaccination Passport

Everything you need to know about British Columbia’s vaccine passport