3PM HITS, and all of a sudden you’re craving your next beach trip. Miami? Cancun? Somewhere less obvious like New Orleans, San Diego? Nothing feels right. Too crowded, too expensive, too cliché, too everything.

1. Escaping to The Narrows 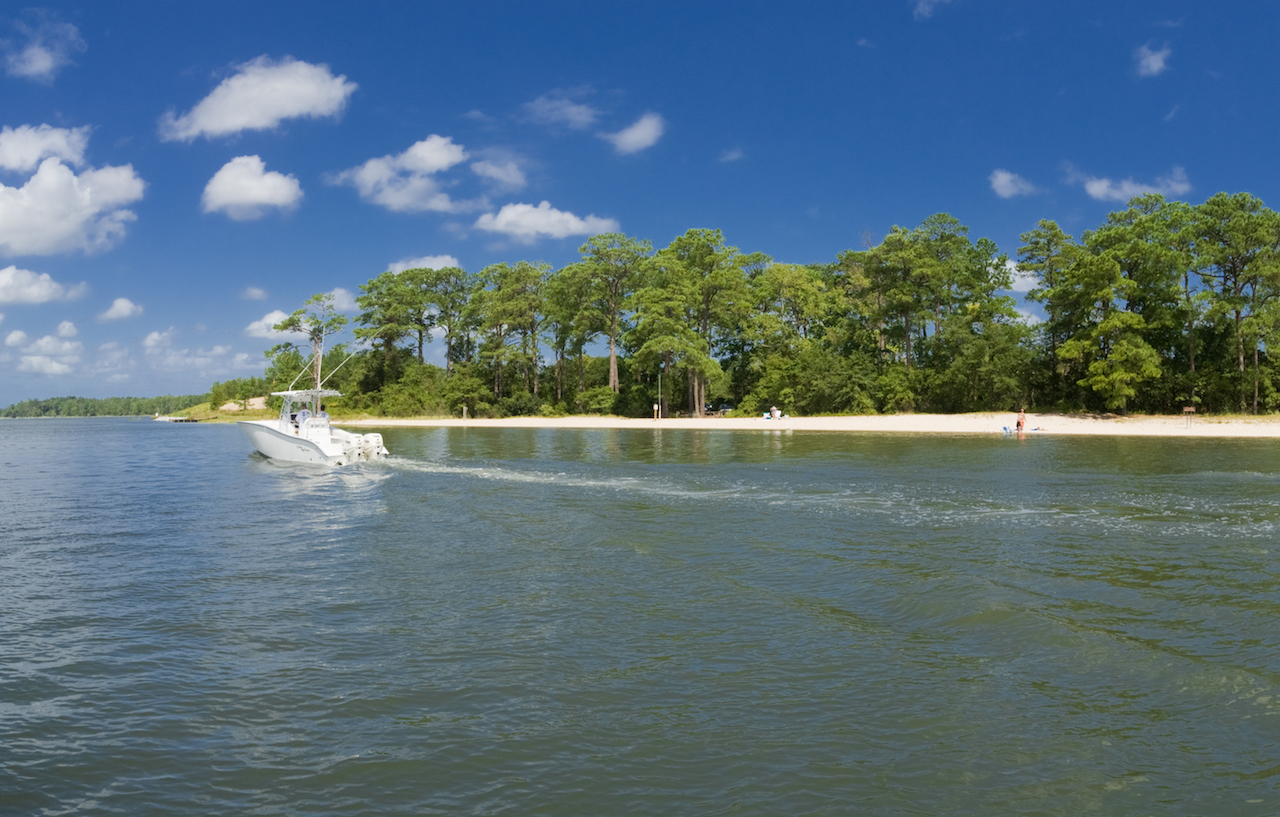 Hiding on the outskirts of First Landing State Park — where Linkhorn Bay meets Broad Bay, once the landing site of the first English settlers in America — is a secluded area called The Narrows. It’s considered the locals’ secret beach, so don’t tell anyone how you found it. There’s easy access to Cape Henry hiking trails and plenty of opportunities for adventure.

Paddleboards and kayaks can be rented at Chesapean Outdoors (they also have kayak tours) and Tula Adventure Sports, but being on the water isn’t just a sport — it’s a spectator sport, too. Keep your eyes peeled for dolphins, cownose rays, blue herons, oyster beds, and bald eagles.

The Narrows is also the original location for stand-up paddleboarding barre, which combines SUPing, yoga, and barre — sign up for a class at SUP Barre and you, too, can be a paddleboarding yogi ballerina, or something. And yes, the workout is as good as it sounds. 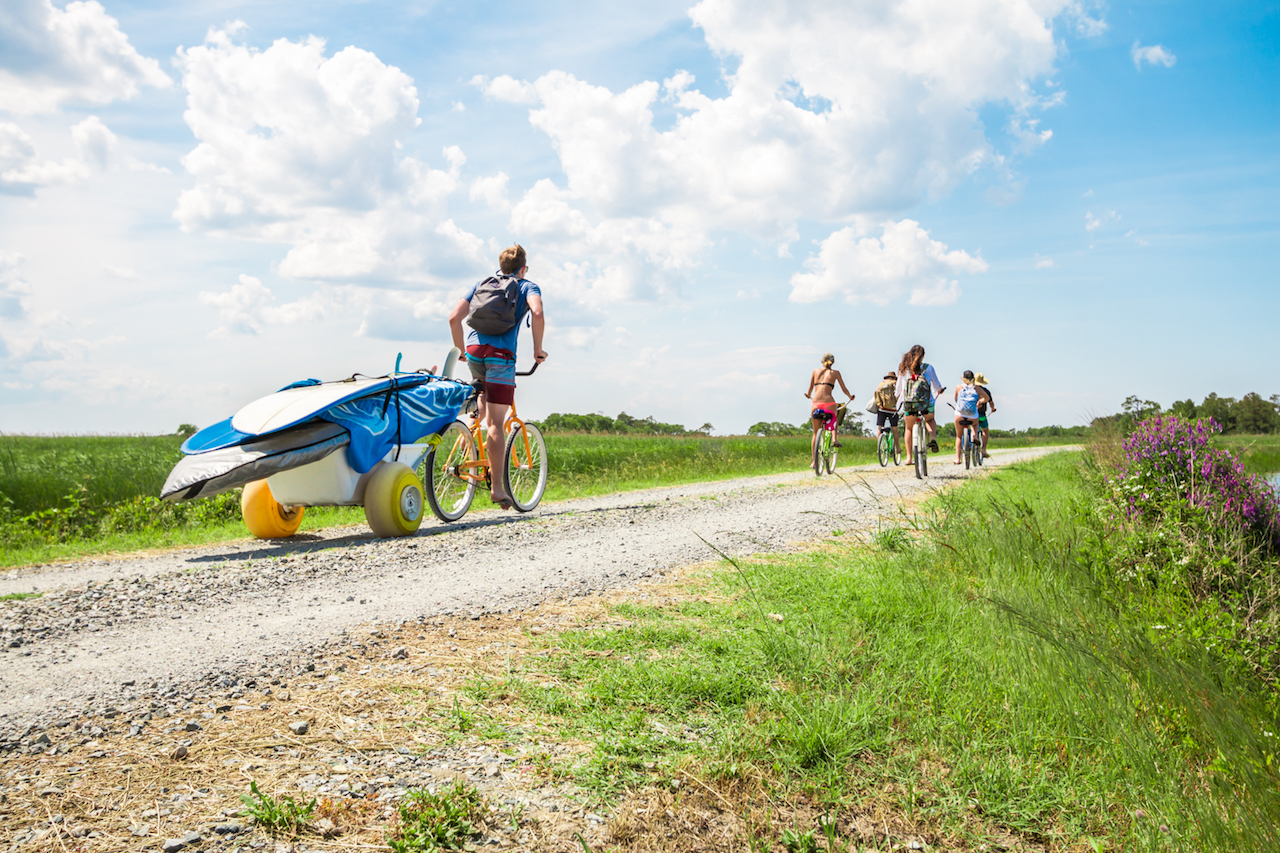 False Cape State Park is a stretch of land dividing the Back Bay National Wildlife Refuge and Currituck Sound on one side from the Atlantic on the other — in other words, it’s not too shabby to look at. Plan to meet some friends at the Little Island Pier and head out on a Surf & Adventure Co. bike tour. It’s seriously the best — and fastest — way to get a sturdy grip on all this area has to offer. If you’re lucky, you’ll see foxes, wild hogs, and hundreds of birds.

There are two options for your tour: You can either cycle the inland trails, or hop on a fat-tire bike and tour the sandy shoreline. Extra-adventurous folks can sign up for the “Go Deeper” option and pedal to the historic Wash Woods community, which was, as legend has it, first developed by a group of shipwrecked settlers.

3. Camp, camp, and camping some more

Fun fact: Virginia Beach has five campgrounds that together include over 1,700 tent and RV sites and roughly 70 rustic cabins, so there’s plenty of room to invite the entire family to join in on a camping expedition. Whether you’re planning to stay in a tent, RV, or cabin, accommodations are easy to find and readily available any time of year.

With an uncrowded coast, easily accessible boat ramps, playgrounds, and environmental education opportunities onsite or nearby, slow moments only happen when you want them to. Oh, and that’s not even mentioning the scenery — many sites have ocean views and beach access.

4. Zipping through the trees at the Adventure Park at Virginia Aquarium 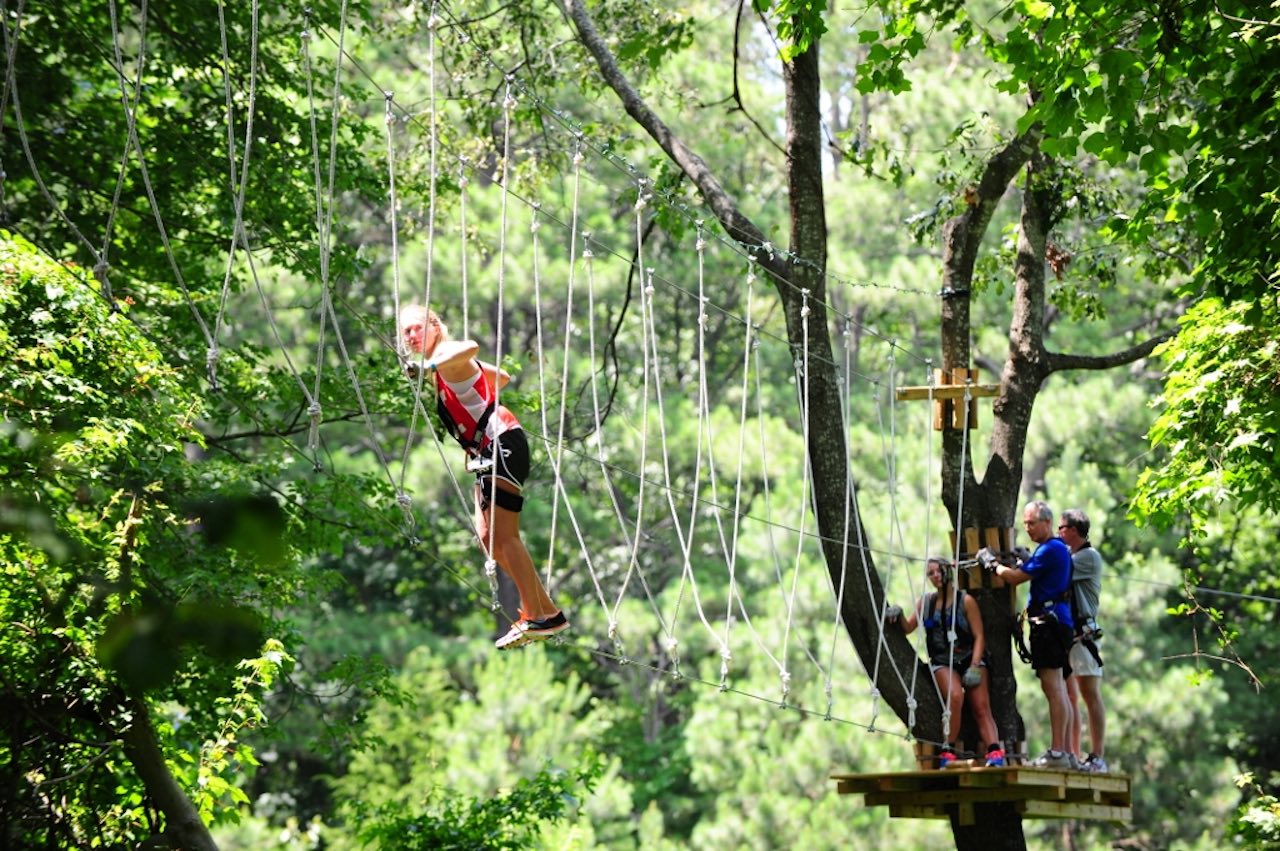 You might feel like you have an inner Tarzan, but letting your hair down and swinging from tree to tree is still a pretty foreign concept. It’s totally possible here, because the Virginia Beach Adventure Park at Virginia Aquarium isn’t on the ground — it’s up in the air. The park is made up of color-coded, treetop ziplining courses of varying difficulty levels, so there’s always an opportunity to challenge yourself to new heights. Literally. With free-floating elements and rope climbing sections, the Adventure Park was designed to be a different experience every time and is far, far more than just attaching yourself to a rope and going when you’re told to go. This is ziplining meets parkour meets George of the Jungle all in one.

Pro tip: Be sure to hit up twilight ziplining to watch as the sun sets behind the treeline.

Wedged next to Croatan Beach, Rudee Inlet is known as the “Harbor of Happiness.” A local pastime is watching the fishing charter boats return to the docks and hoist their catch — or, if you prefer, hopping aboard as the boats depart to catch some for yourself. There’s also dolphin-watching boat tours, parasailing, and SUP boarding at Rudee Inlet.

And after you’re sufficiently prune-y or fished out, slip into a table at Rockafeller’s and dig into some of the area’s freshest seafood — think Oysters Rockefeller or shrimp and crab cakes. If you’re feeling bold, try an Oyster Shooter. It comes with massive kudos for free.

6. Paddling through the Back Bay National Wildlife Refuge 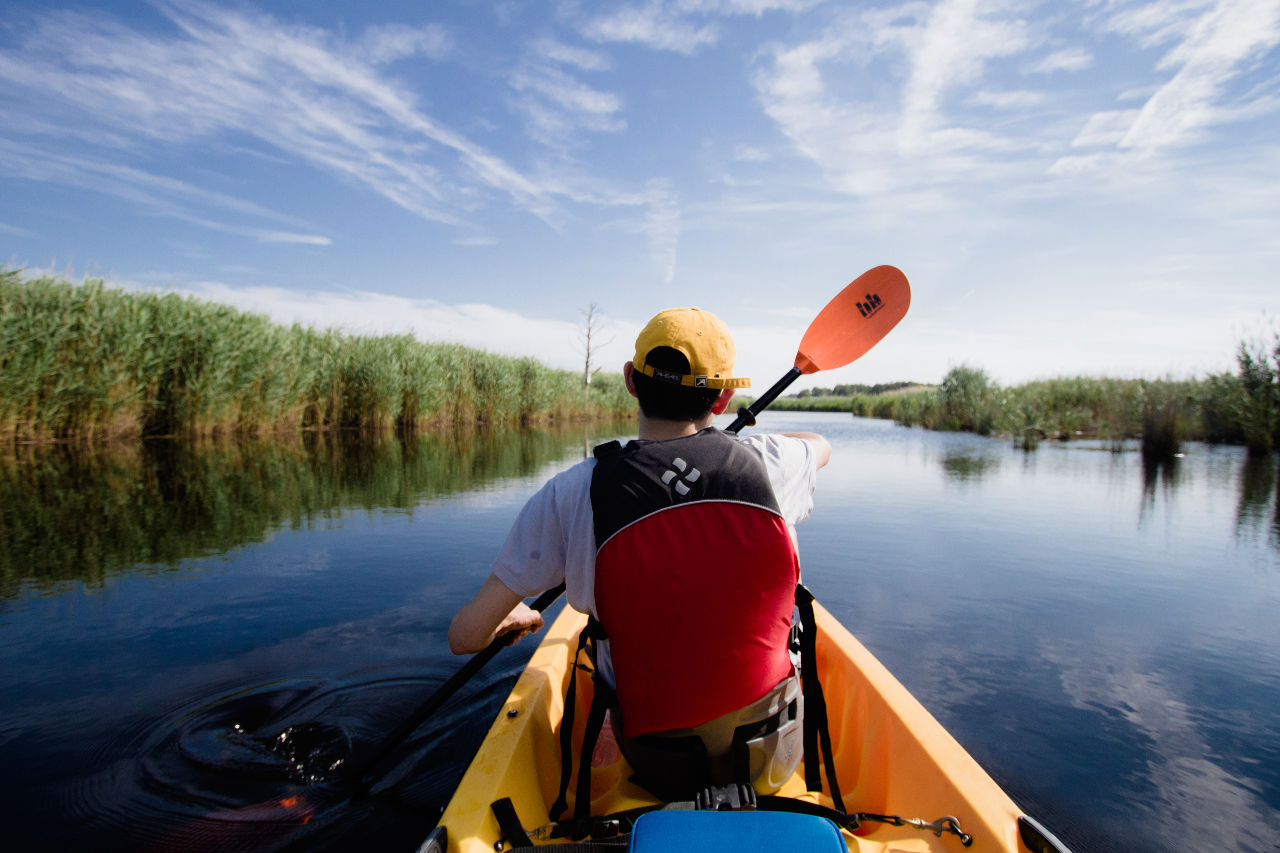 The 8,000-acre Back Bay National Wildlife Refuge is one of the only pristine and undeveloped areas along the entire Atlantic coastline. If you want to see what this side of America was like centuries or even millennia ago, you’ve got to come here. And it isn’t just one big forest — it’s chock full of different ecosystems, including beaches, freshwater marshes, wooded swamps, woodlands, and dunes. Over 300 species of birds have been spotted here, and if you visit during migration season, you might just see 10,000 snow geese hanging around.

Just hitting the ground and exploring the land on foot can be a super rewarding way to go, but there’s something about getting in the water. Kayaking on the Sunset Dinner Tour with Surf & Adventure Co. takes you through the bay and back, conveniently ending at Blue Pete’s, a fresh seafood restaurant and staple of the area — with outdoor seating, to boot.

7. Getting your groove on during Ynot Wednesdays 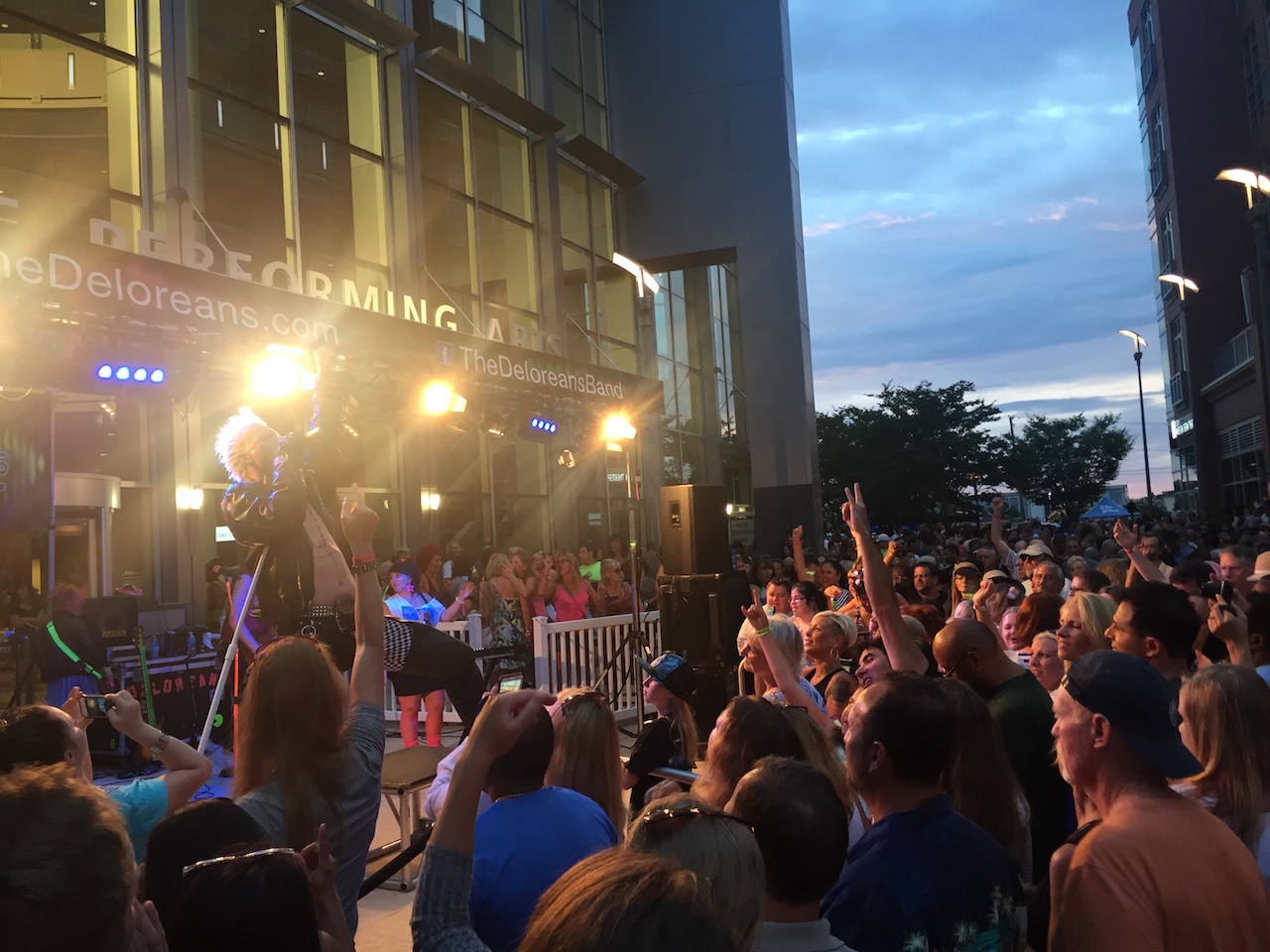 Even though there’s beaches, farms, and campsites all around, Virginia Beach itself is still very much a city. And Town Center is the place to be when you want to check it out. In summer, make sure to catch Ynot Wednesdays, a celebration on the plaza outside the Sandler Center for Performing Arts. This weekly fest is basically a giant dance party with live entertainment provided by local bands, and there’s a beer-tasting arena for craft beers from some of Virginia’s best breweries. The event also fittingly serves pizza from local Ynot Pizzeria — none of that national pizza chain nonsense.

And the final perk: All the proceeds benefit the Sandler Center Foundation, a driving force behind local art and artists.

8. Breaking out the peg leg on a pirate-themed cruise 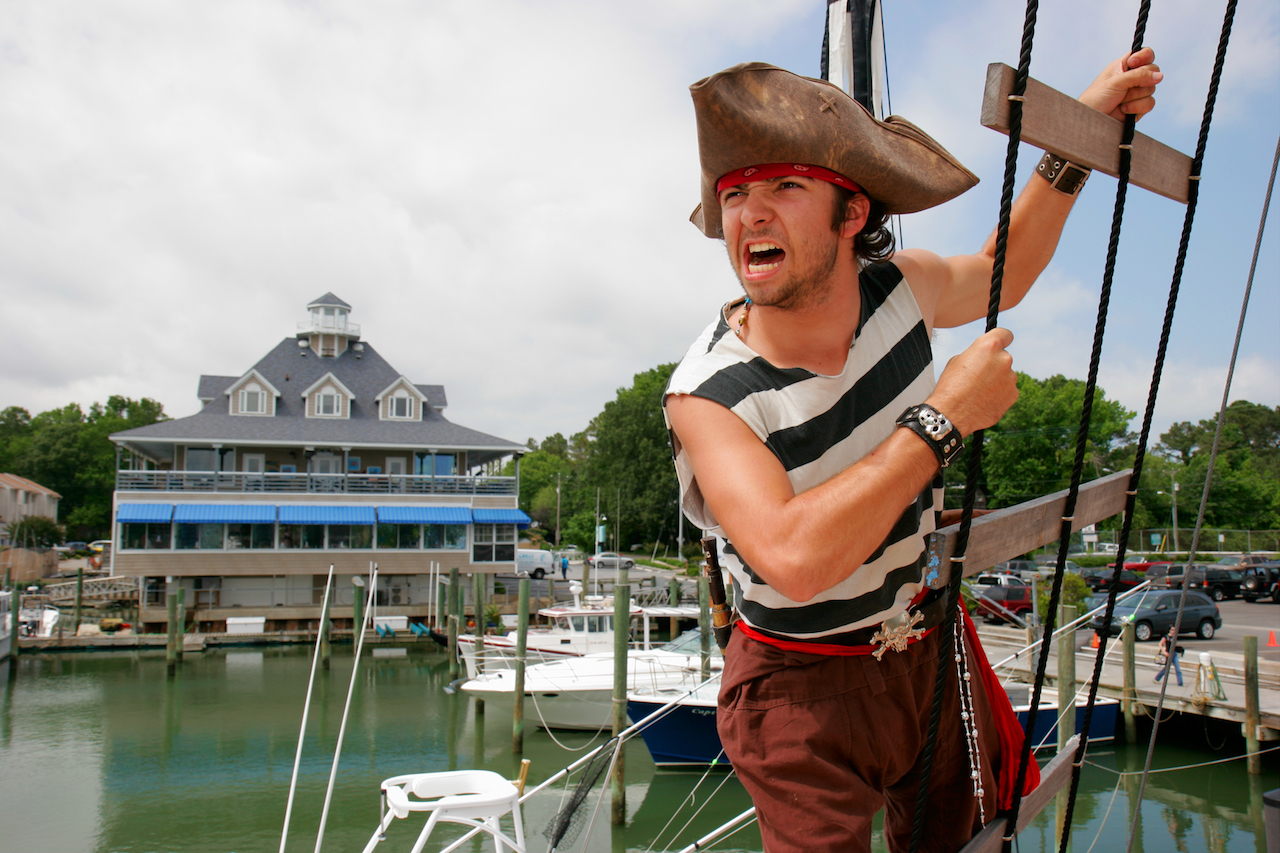 Brush up on your pirate lingo and hop aboard the Lost Pearl, a 65-foot replica of a Spanish galleon pirate ship, with Captain Jack’s Pirate Cruises. You’ll set sail on the Atlantic with a troupe of other wannabe scallywags for an hour or two, and there’s almost always a water cannon that needs manning. The family-friendly cruise includes pirate shows and a cannon-launching simulation; on the 21+ cruise, the rum never runs dry. And, yes: Pirate gear to the nines is totally acceptable — and encouraged.

9. Harvesting your own Lynnhaven oysters 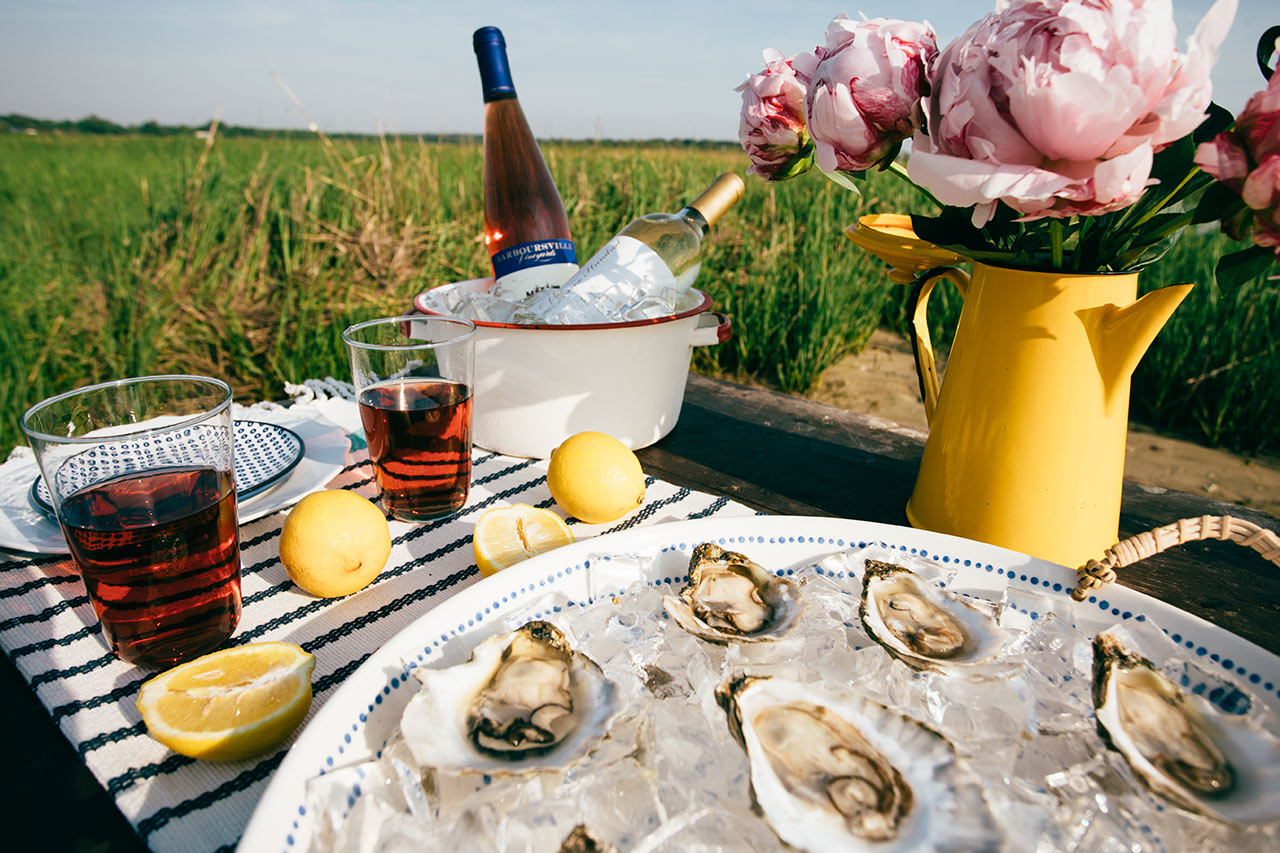 With Pleasure House Oysters, you’ll get the chance to gather, harvest, and eat your own oysters aboard a two- or four-hour boat tour. Wine isn’t included, but you’re encouraged to bring your own for the feast — this experience is all about eating and drinking well.

On the tour with Captain Chris Ludford, you’ll learn about the ecology of the Lynnhaven River and what makes it so great for oysters, and then you’ll step into the water (in the provided gear) to collect and sort your own. Afterwards, you’ll float on the river and taste for yourself the same Lynnhaven oyster flavors that have been relished by presidents and royalty. Pop open that bottle of wine and enjoy your harvest — that’s a solid wrap on another day, Virginia Beach style.