1. The market to end all markets 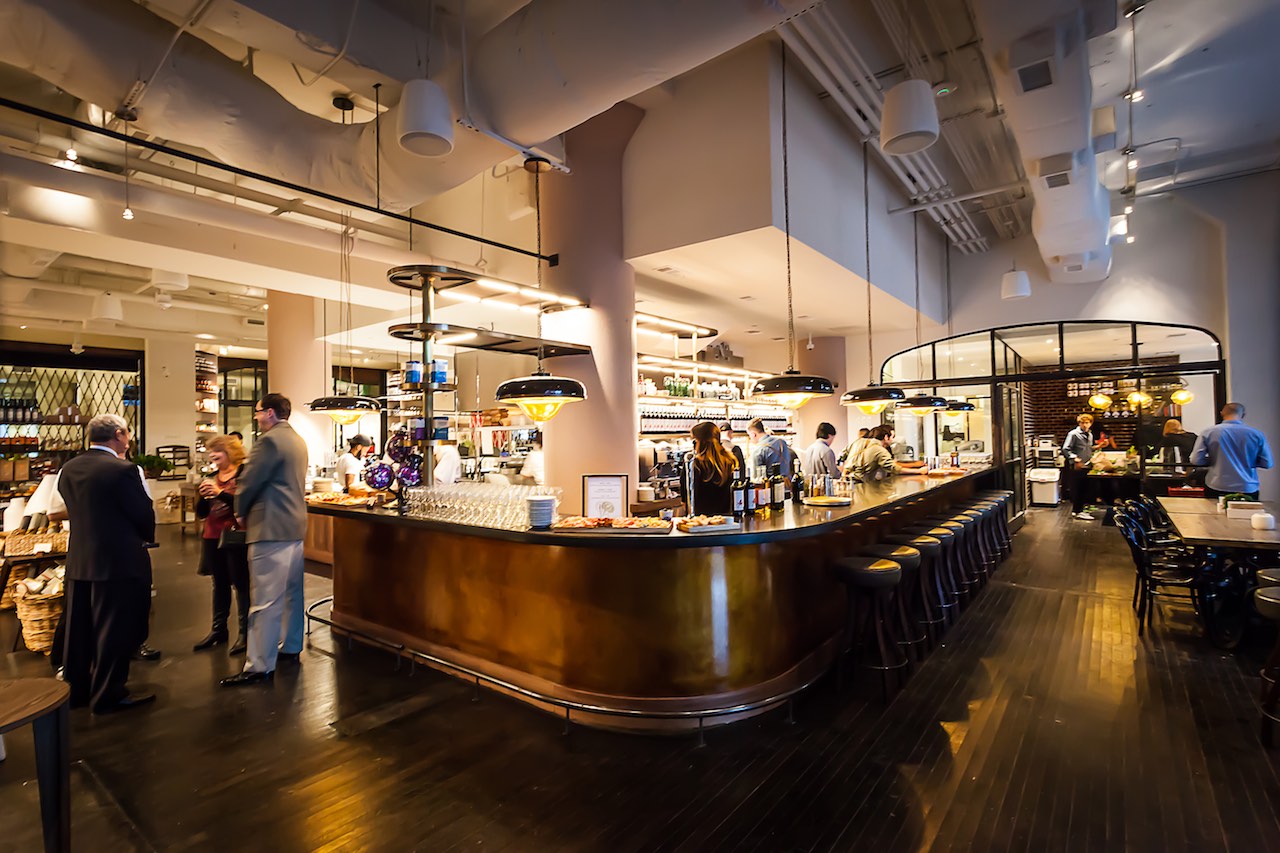 In other words, Ponce City Market. It’s housed in the historic Sears, Roebuck & Co. building in Old Fourth Ward and is quickly becoming a centerpiece on the Atlanta BeltLine (never heard of the BeltLine? See below).

The reason for all the hubbub around Ponce City? The Central Food Hall — arguably the greatest food hall in the Southeast and home to some of the city’s best-known chefs. Restaurants you should experience include the gourmet Italian market Bellina Alimentari, offering slow-cooked Italian foods made with fresh ingredients; The Mercury, serving American classic cocktails straight out of Mad Men; Latin-inspired sandwiches, baked goods, and hot plates at El Super Pan (from Hector Santiago, formerly of Pura Vida); and King of Pops, home of gourmet popsicles so good you’ll never want a regular old freezie again.

Other more-than-honorable mentions include Simply Seoul Kitchen, Honeysuckle Gelato, and some epic Mediterranean cuisine at Marrakesh (fresh pita bread made daily). And that’s not even getting into the shops… 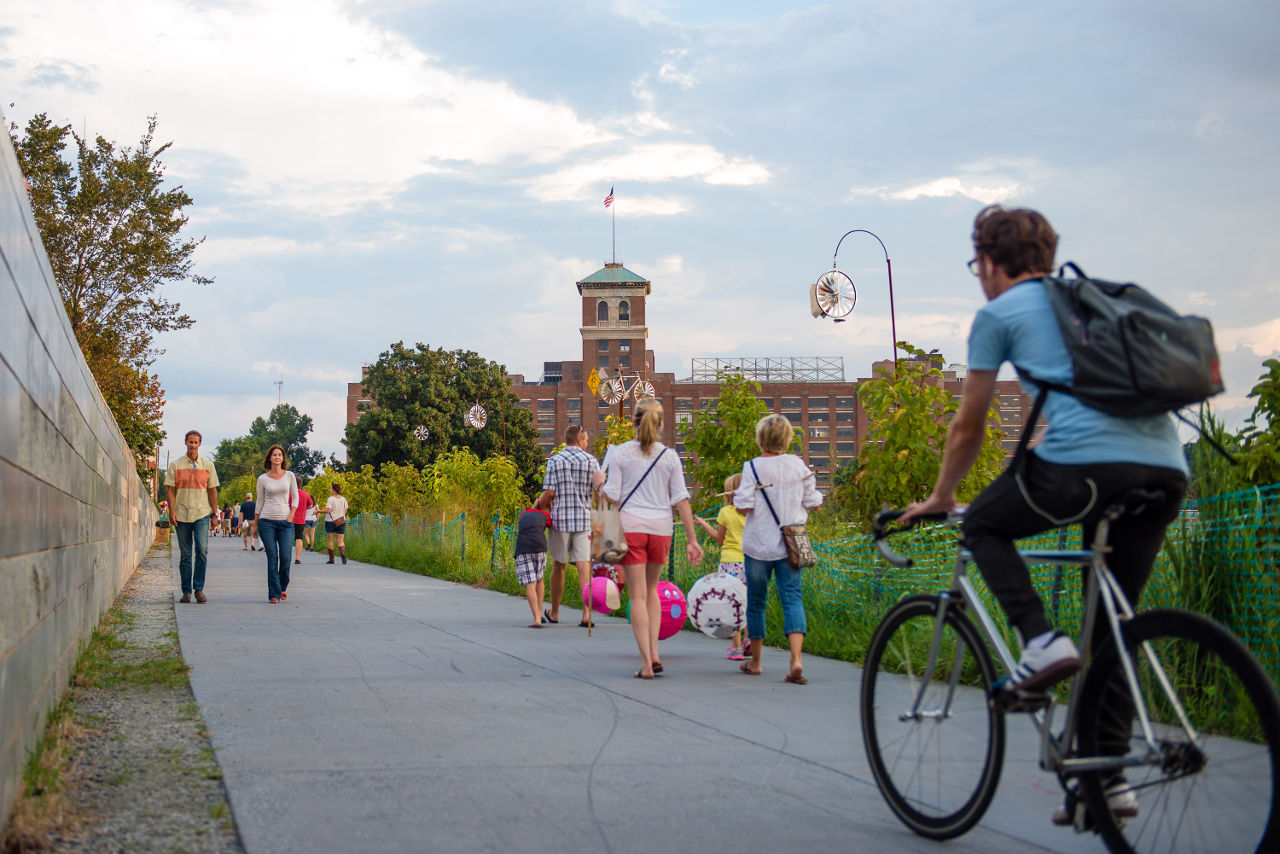 The Atlanta BeltLine is the city’s newest and hippest outdoor asset — it’s 22 miles of unused railroad tracks looping through the core of the city with pedestrian and bike paths, spur trails leading to incredible places, and plenty of parks.

Much like New York City’s High Line, the BeltLine also has some of Atlanta’s best art — wander the route and you’ll experience the Southeast’s largest temporary public art display to date. And let’s not forget food — some of Atlanta’s favorite restaurants are right here, complete with walkup patios so you can keep enjoying those views while you eat. Try the salmon chips or fried catfish and grits for brunch at TWO Urban Licks, or grab a latte made (with beans roasted locally by Batdorf and Bronson) at Ponce City Market’s Dancing Goats Coffee. Don’t be surprised if you find yourself wanting to spend the whole day BeltLining.

3. The place where artists go to dream

Set in West Midtown, the Goat Farm Arts Center is a hodgepodge of history, culture, and creativity. It’s housed in a 19th-century warehouse complex and is basically one giant retreat for artists, performance companies, and hobbyists — as well as a popular location for the film industry (think The Hunger Games and The Walking Dead production levels). Originally a cotton gin manufacturer, it later produced ammunition during WWII — and now its urban, industrial feel is attracting a new kind of creator.

More than 450 artists and performers work out of the art studios at the center (and some teach classes). Goat Farm also hosts classical and contemporary concerts, theatrical performances, film screenings, workshops, art exhibitions, panel discussions, and seminars. Bonus: A lot of the exhibitions and performances are free.

4. A portal to the Civil Rights Movement 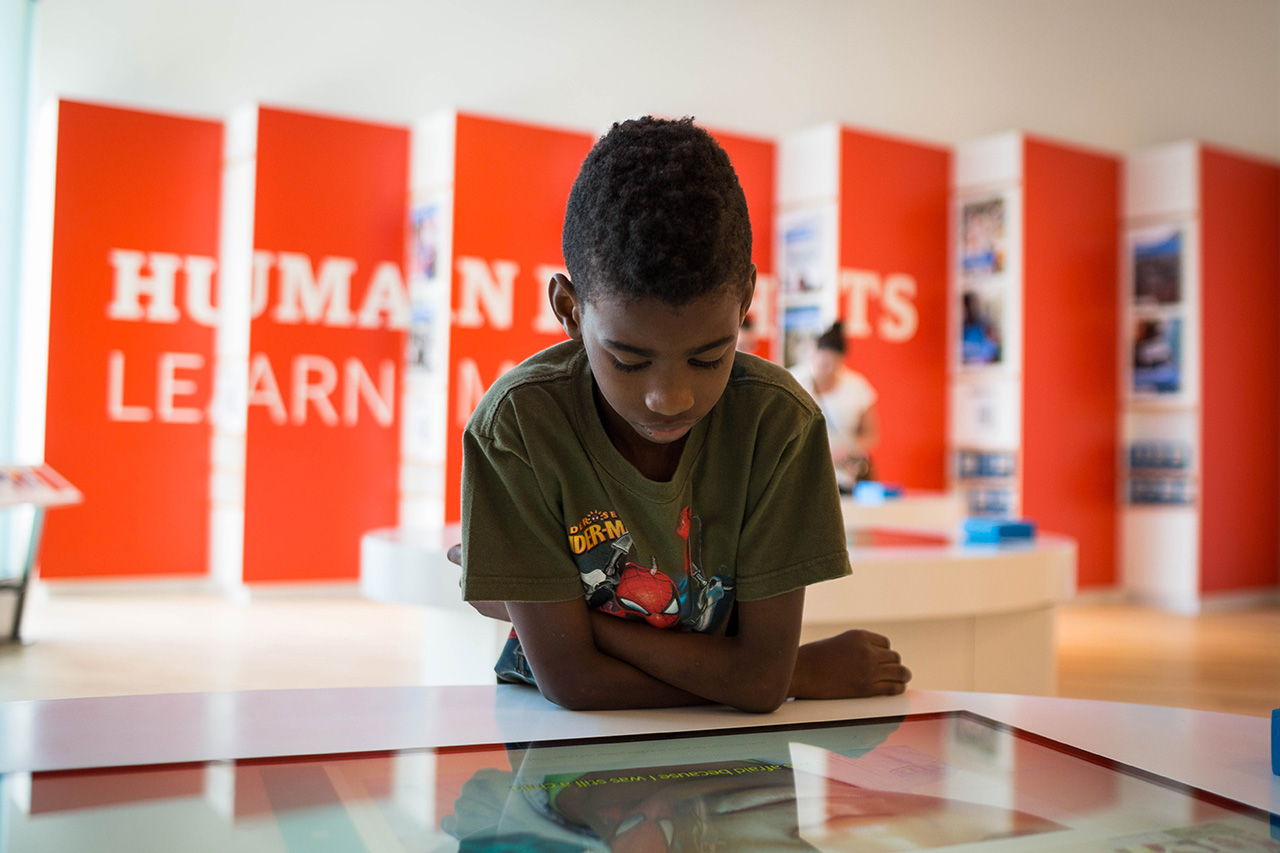 Photo: The Center for Civil and Human Rights

On Auburn Avenue, just east of downtown, you’ll find the birthplace of Martin Luther King Jr. And three miles away (connected via the Atlanta Streetcar) is The Center for Civil and Human Rights, a museum dedicated to sharing stories of struggle and strength. But it’s more than that — hopeful, haunting, and moving — as you can sit at the mock lunch counter, put on headphones, and listen to the taunts and jeers (the stools even move to simulate knocking) that nonviolent protesters faced here not all that long ago. This isn’t just any museum — it’s a worldview-changing experience.

5. The Newsroom, but in real life

Right smack dab in the middle of downtown Atlanta, check out the CNN World Headquarters for an insider look into big-name media and journalism. CNN Studio Tours are available and include technology demonstrations as well as stops at viewing galleries overlooking the newsrooms and watching the anchors of CNN, CNN International, HLN, and CNN en Español. It’s totally intended for the public — you can choose from a variety of tours, like the 50-minute guided walking tour, the Morning Express Tour that goes behind the scenes of Morning Express with Robin Meade, and the VIP tour that lets you view the actual control room of HLN, go inside the state-of-the-art HD Studio 7, and visit both the CNN and HLN newsrooms.

Completely unrelated bonus: The atrium escalator has been listed by Guinness World Records as the longest freestanding (supported only at the ends) escalator in the world.

6. Golf — how it was meant to be experienced 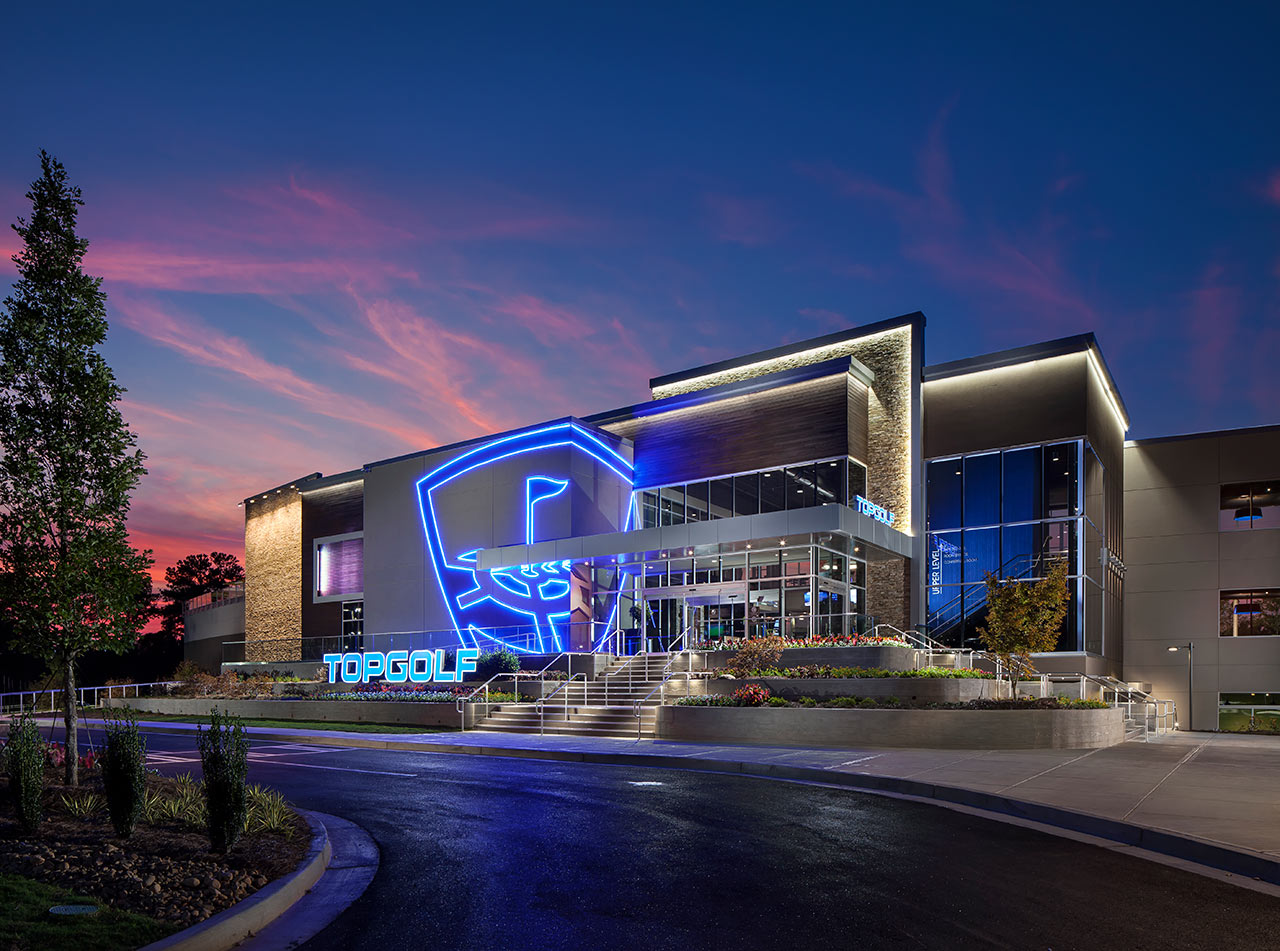 TopGolf, a three-story, 65,000-square-foot space, is definitely not just for golfers. For starters, one floor is a rooftop terrace with fire pits, space for private events, and a bar that offers a huge selection of drinks — try the Tipsy Palmer and Melon Mulligan. There’s a from-scratch kitchen that’s completely chef-driven and focuses on genius fusion-esque things you wish you’d thought of, like chicken and waffle sliders, mushi (a cross between sushi and a burrito), and smoked brisket nachos.

But it’s not golf like you’re used to. Try the signature TopGolf, where you score points by hitting balls into targeted areas (no cheating here, they use microchips to keep track!). The more accurate your shot is and the farther you hit it, the more points you get. Don’t know a golf ball from a ping-pong ball? At TopGolf, lessons are taught by a certified pro who covers the fundamentals with the help of technology (Tipsy Palmers not included).

Atlanta loves its outdoors, but it also loves its creativity, and sometimes the two combine in weird and mysterious ways. Doll’s Head Trail is the epitome of this, so be sure to bring your camera.

The trail is part of Constitution Lakes Park, a nature preserve formed on the grounds of the defunct South River Brick Company. The old clay pits, over time, filled with water, creating the lakes; now the preserve is 125 acres of “urban” nature just a few miles from downtown Atlanta.

And giving reason to the name, lining the trail is “found art” — that is, art found in the preserve. It’s mostly dolls, doll parts, bottles, old bricks, and other small trinkets, all arranged to create displays along the walk. If you find something interesting along the trail, be sure to add it to one of the “exhibits,” becoming one of the artists yourself (and doing your civic duty of keeping the preserve clean).

8. The birthplace of your inner race car driver

If you’re the kind of driver that thinks speed limits are for wimps, hightail it to the Porsche Experience Center Atlanta. The complex is all things Porsche, including a test track that resembles an off-road course. Really into fast cars? You can check out the Human Performance Training Facility, Driving School Simulator, and the Classic Restoration Center.

Though newbies will certainly get their thrills, it’s the hardcore driving enthusiasts who’ll find a home here. You’ll be able to drive your own car, testing its speed in the “Dynamic Area,” try out the Handling Circuit (an area designed to mimic a winding road), test your control skills on the Kick Plate, and take on the 45-degree vertical descent challenge of the Off Road Circuit.

9. The best place to hang your hammock

Few places get as scenic in Metro Atlanta as the Palisades. Tracing the banks of the Chattahoochee River northwest of downtown, there are bluffs, bamboo forests, and even Class I and Class II rapids for whitewater rafters. There are also tons of trails great for both hiking and running — the East Palisades trail is less crowded, has higher elevations, and is better for hikers; West Palisades follows the banks of the river and is paved and well-suited for runners. Watch local chef Kevin Gillespie share his appreciation for this urban green space in the video above.

After a morning of breaking a sweat, don’t forget the hammock — you deserve it. Head to East Palisades, go to the edge of the bamboo forest, and set ‘er up. You’ll be right along the river, listening to the coursing waters and bamboo waving in the breeze. Consider it your own zen spa just a quick hop from the thrum of the city.

This post is proudly produced in partnership with Atlanta
Tagged
Travel Atlanta, GA, United States Atlanta: #DiscoverATL
What did you think of this story?
Meh
Good
Awesome
✖
travelstoke
Download the mobile app
stoked by