Krakow was an accidental holiday for me. I tell people I was there to shoot a film festival, but really I went there because my girlfriend is from there, and I ended up staying long after the film festival had ended just to explore this incredible city. I will warn you: check the temperature before you go. It’s quite often -20ºC in winter, and by contrast, can get up to 35ºC or 40ºC in the height of summer.

Kazimierz is a good place to start. The beers are cheap, the nightlife lively, and there’s always a good snack available until late. Try some hot beer. On a cold night it’s surprisingly appealing, the herbs and spices making it the lager drinker’s equivalent to mulled wine. It’s served well in Alchemia, a bar on the corner of Plac Nowy in Kazimierz where the smoking area is hidden behind the false doors of a wardrobe.

If you’re in search of a little more of the city’s recent history, hop the number 22 tram and head for Nowa Huta, the district built under Stalin to house the workers who came from all over the country to work in the Soviet steelworks. Apart from wandering the socialist-realist architecture of this strangely beautiful artificial town, head to Aleja Róż, the wide avenue at the heart of the suburb which takes its name from the now-departed rosebushes. There you should visit Stylowa, the café where musicians used to meet up and discuss Big Beat, the name they invented to stop Communist authorities from realizing they were all talking about rock ‘n’ roll, which was banned. Go one step further and ask for some orangeade, the rockers’ tipple of choice.

No trip to Krakow would be complete without three things: pierogi, smalec, and vodka. Pierogi is traditional Polish cuisine, little dumplings full of cabbage, white cheese, or pork. It’s cheap and filling, and delicious too. When eating pierogi, try the smalec. Forget that it’s just pig grease and focus on the deliciousness. Then order shots of wiśniówka (cherry vodka) and you can pretty much apply for your Polish passport.

If you’re not too bleary-eyed and short of breath from all of the great food and cheap beer, try a walk up to Kopiec Kościuszki, the man-made hill built in the 19th century as a present to commemorate a leader who fought in Poland and the United States. It’s a great view over the whole city and offers a good excuse to head for the nearest bar when you get back down.

For accommodation you should be looking at around $15 per night for a budget bed. Eating out in a mid-range restaurant will set you back about the same with wine. Most importantly, by no account should you miss out on visiting Piękny Pies as the hour gets late: it’s a club that single-handedly manages to explain why Poland should be at the top of every young backpacker’s budget list. 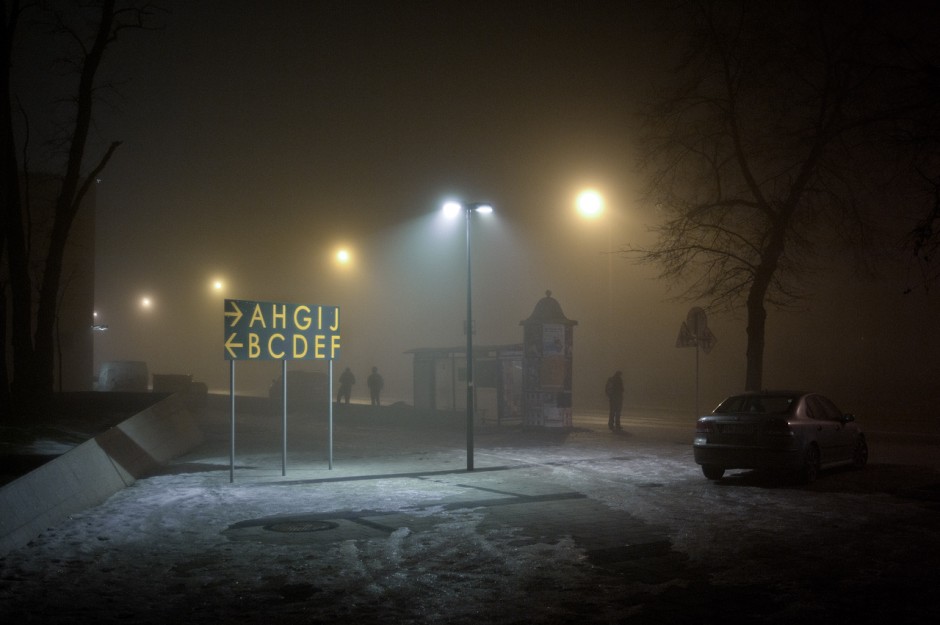 A foggy night outside the Cracovia stadium. Cracovia and their bitter rivals Wisla (pronounced Vee-swah) are separated only by a park, and have a history of extreme violence between hooligans on both sides. If you're going to a match, correct scarf selection is essential. 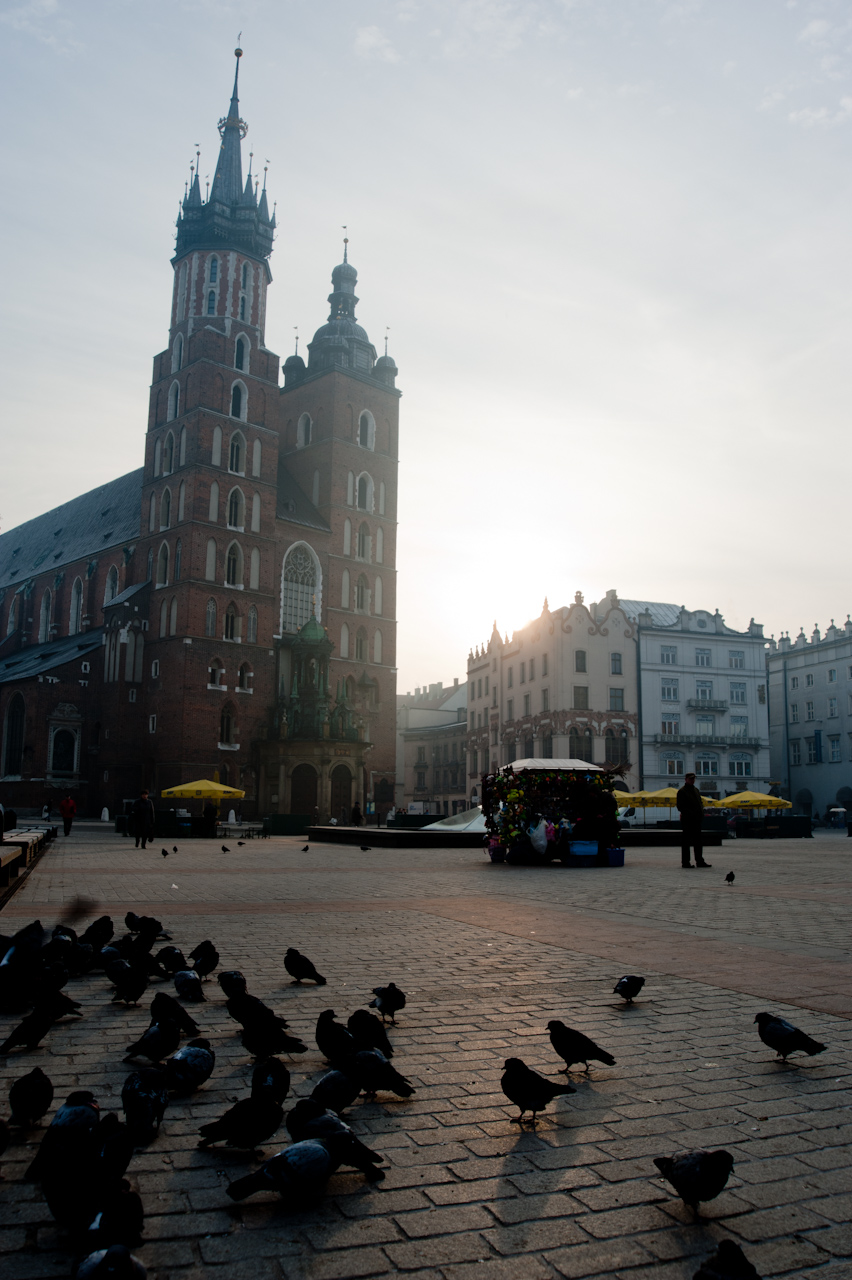 Dawn over Rynek Glowny (Market Square) and the twin steeples of St. Mary's Basilica. The towering church has a story which stretches back to the 13th century (no surprise: the same is true of most of the city). Legend has it that two brothers were competing to see who could build the highest steeple, and the losing brother killed the winner out of jealousy. Every single hour of every day, on the hour, a trumpeter appears at a high window in the taller tower and plays the Heynal, a tune which ends very abruptly, allegedly to remember one of his predecessors who was shot in the throat with an arrow whilst playing the same tune in the 13th century to warn of approaching Tartar invaders. 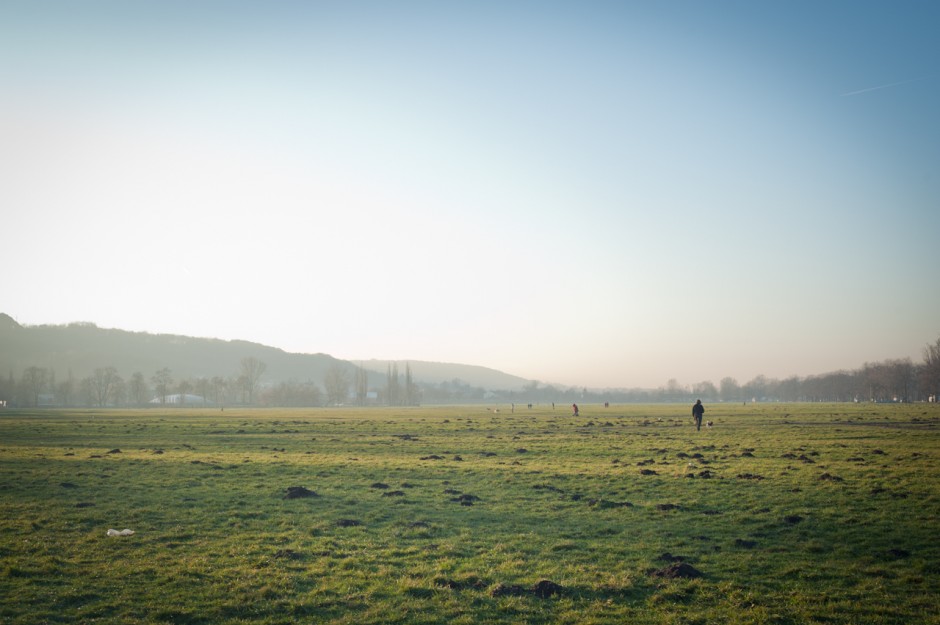 Early morning dogwalkers in Blonia Park, the meadow separating the Wisla and Cracovia football stadiums. Pope John Paul II (and more recently Pope Benedict XVI) celebrated mass there on a number of occasions, and many concerts, events and festivals are also held on the sprawling grass area. My personal favorite, though, are the rollerbladers, who love the smooth pathways along the edges of the park. 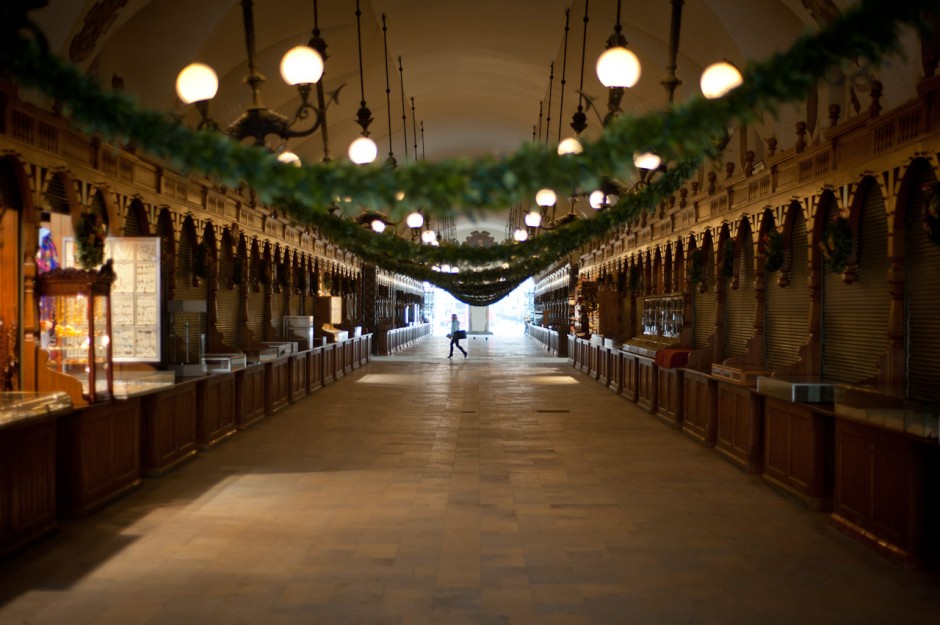 The interior of the famous Cloth Hall (Sukiennice in Polish) in Market Square. Recognised by UNESCO as a World Heritage Site in 1978, the Cloth Hall was an important venue for international trade for centuries, and because of Krakow's position on the Amber Road it became (and remains) one of the largest amber markets in the world. For the less wealthy there are plenty of cheaper souvenirs on offer here, but nothing says 'glamour' like a large lump of what looks like earwax. Upstairs, away from the crowds, there's a brilliant museum of art, worth visiting solely for the massive painting of horses ("Czworka"), though there are plenty of other stunning works on show. 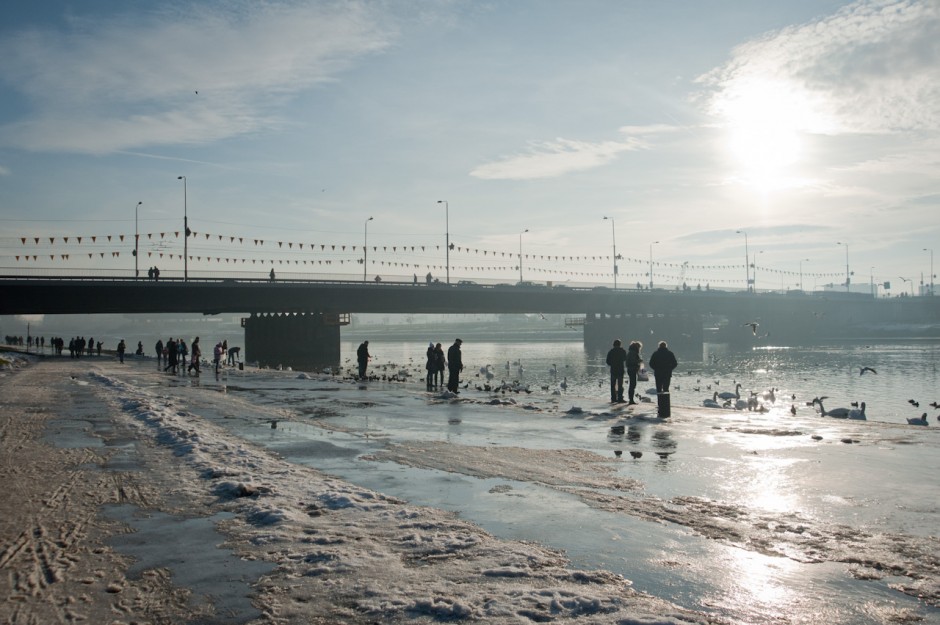 People feeding the ducks on the banks of the River Wisla in the shadow of Grunwaldzki Bridge in midwinter. On crisp, sunny days like this the riverside walkways are crowded with families walking in the slushy snow. A pleasant walk from Wawel Castle to the St. Stanislaus church at Skalka is recommended, being short enough that you won't freeze, but long enough to work up a thirst before hitting Kazimierz. 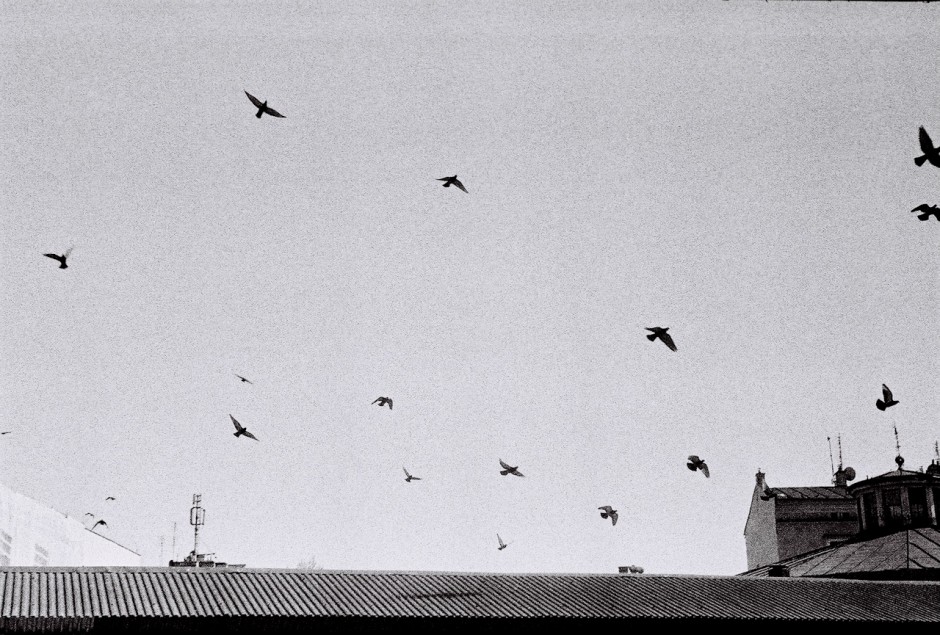 Pigeons fly over the roofs in Plac Nowy, the centre of Kazimierz, the old Jewish district of Krakow. Kazimierz is a popular place for budget drinking, with students flooding the many trendy bars and cafes around the square before stumbling over to the zapiekanka sellers (take a loaf of French bread, cover it in toppings, cover that with cheese and consume messily) for a snack for the road or just as an interlude during the drinking. 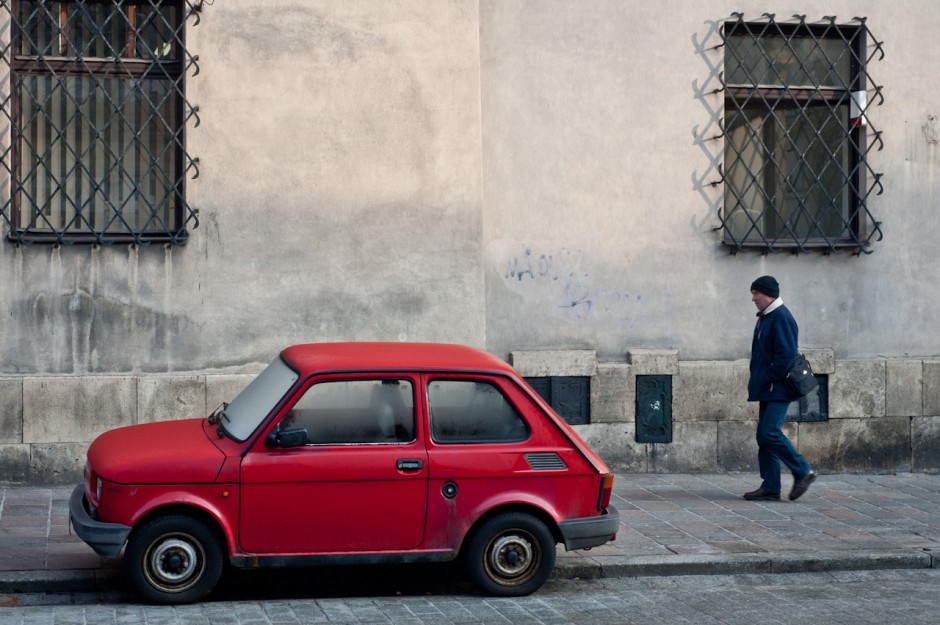 A man walks past the most Polish object in the world, the Maluch. Boasting an engine of around 500cc and all the capacity and comfort of a shopping cart, the Polski Fiat 126p is a symbol of Poland, its nickname meaning "small". You still see a lot of people driving them everywhere, and there are many modifications including the stretch Maluch and even the non-convertible, which is a Maluch with its roof cut off. 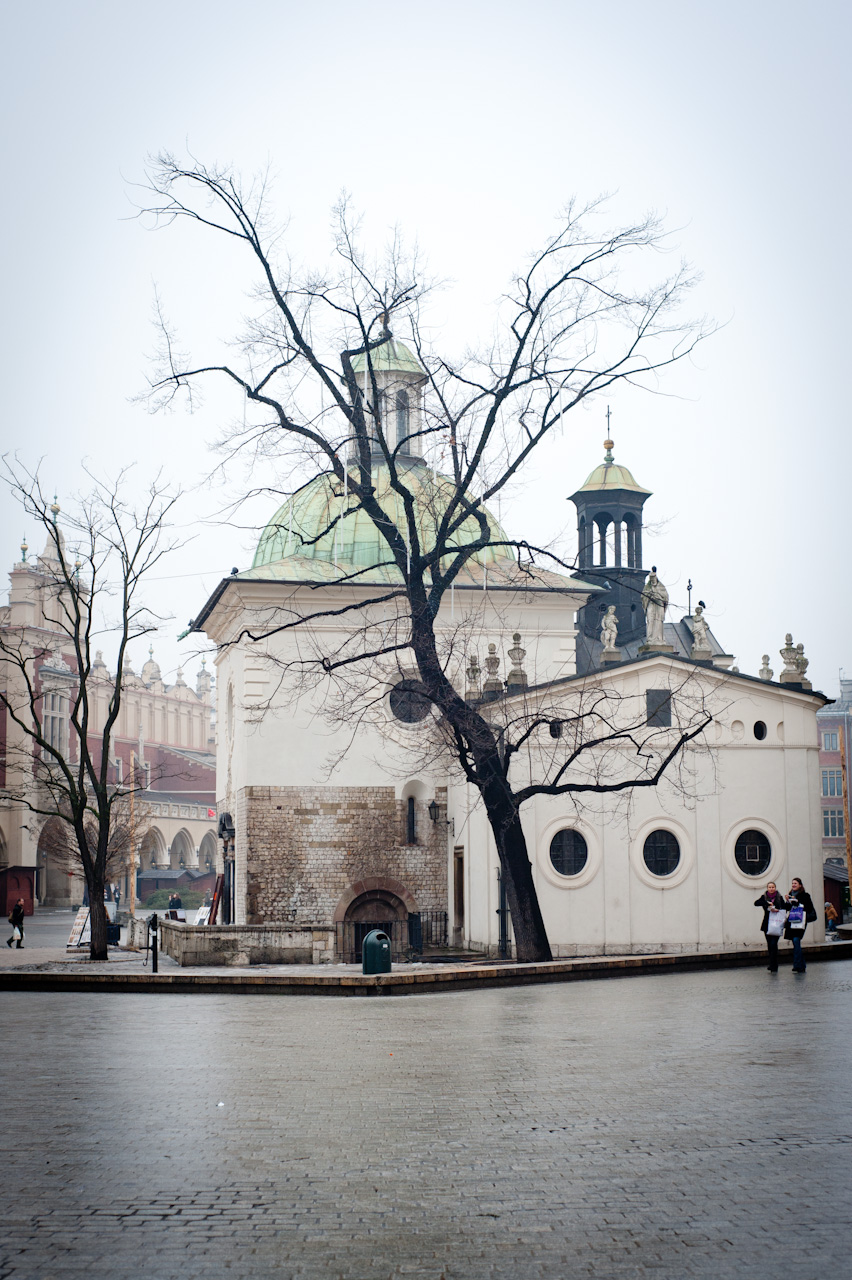 The Church of St. Adalbert in Market Square. With foundations dating back to the 11th century, this little church is one of the oldest buildings in the entire city, and likely the oldest church. The barrel vaulting of the roof contains beautiful stonework, and if you're passing by it's definitely worth a look inside this little landmark of the city. 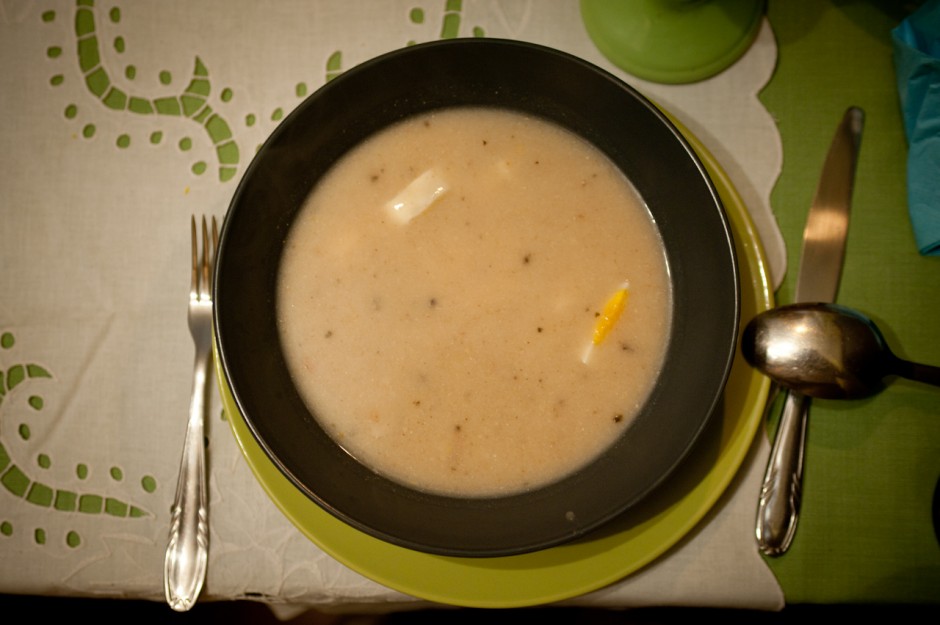 This sour rye soup is traditionally eaten at Easter and contains ham, bacon, white pork sausages and potatoes, and is heavily spiced with marjoram. It's very tasty, especially if you like pork. 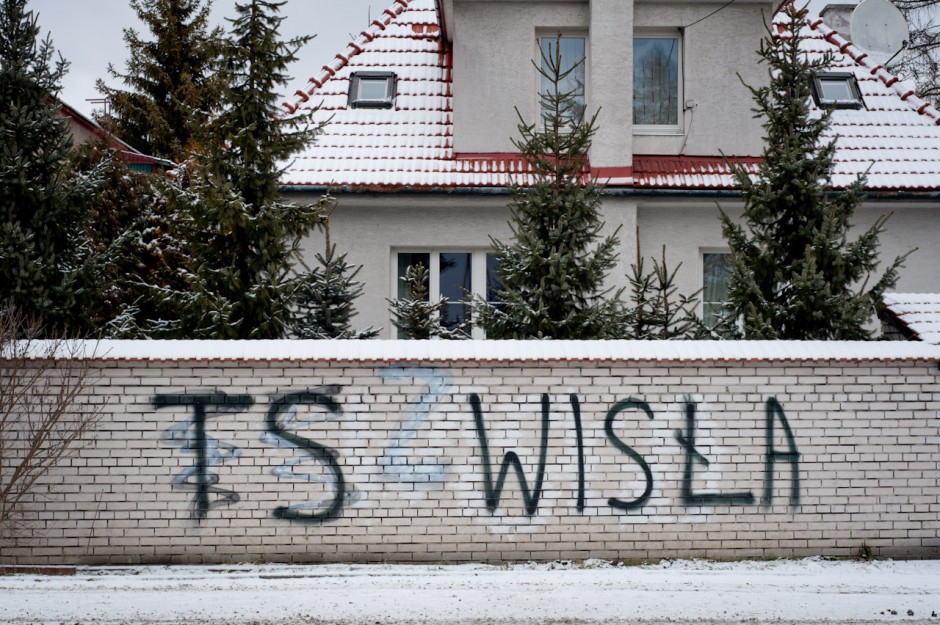 Graffiti on a wall in the Wola Justowska neighbourhood in support of the Wisla football team. Walls across the entire city are covered in football teams' names, and it's often possible to tell when you're leaving a district because the names on the walls change. 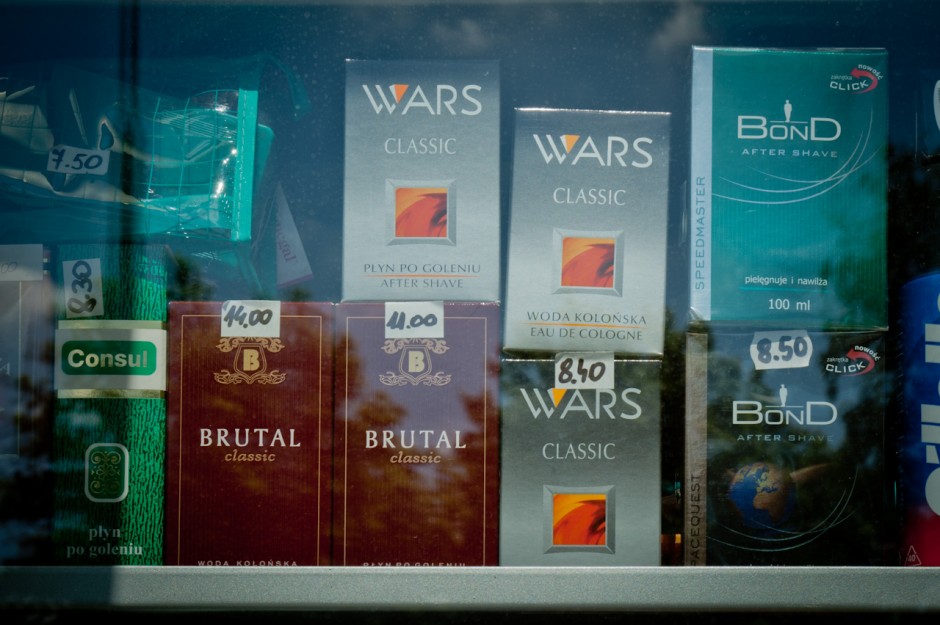 Aftershaves with evocative names on sale in a kiosk in Nowa Huta, a Krakow suburb. 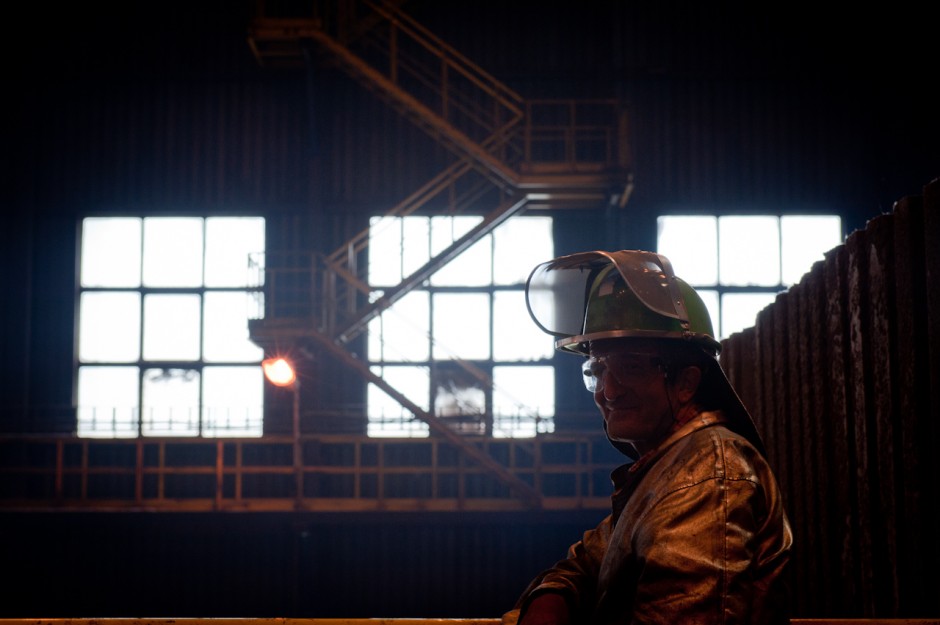 A worker at the Nowa Huta steelworks takes a break. The steelworks, built under Stalin and now owned by AcelorMittal, were built in the 1950s and the suburb of Nowa Huta was created to house the workers and their families. It's an area with a fascinating history and well worth a visit. It has a bad reputation stemming from a few bad-newsworthy in 'new' Nowa Huta, but it's largely undeserved. Just stick to the old town at night and you'll be fine. 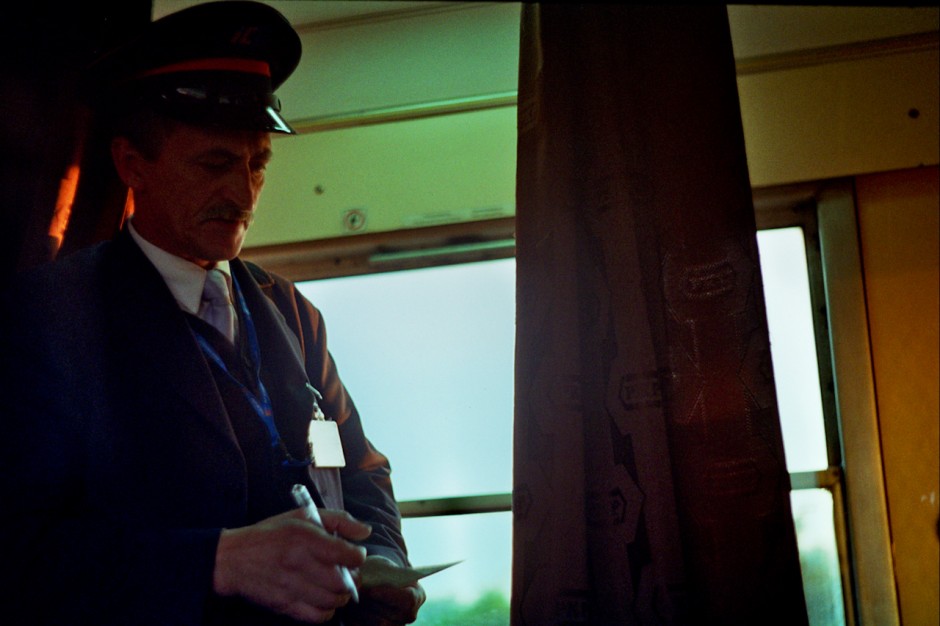 A guard on a train from Krakow to Warsaw checks tickets. The trains are punctual and pleasant (you get old-style compartments with six seats and a sliding door opening onto a corridor) but it can be very confusing trying to catch the right train if you don't speak any Polish. 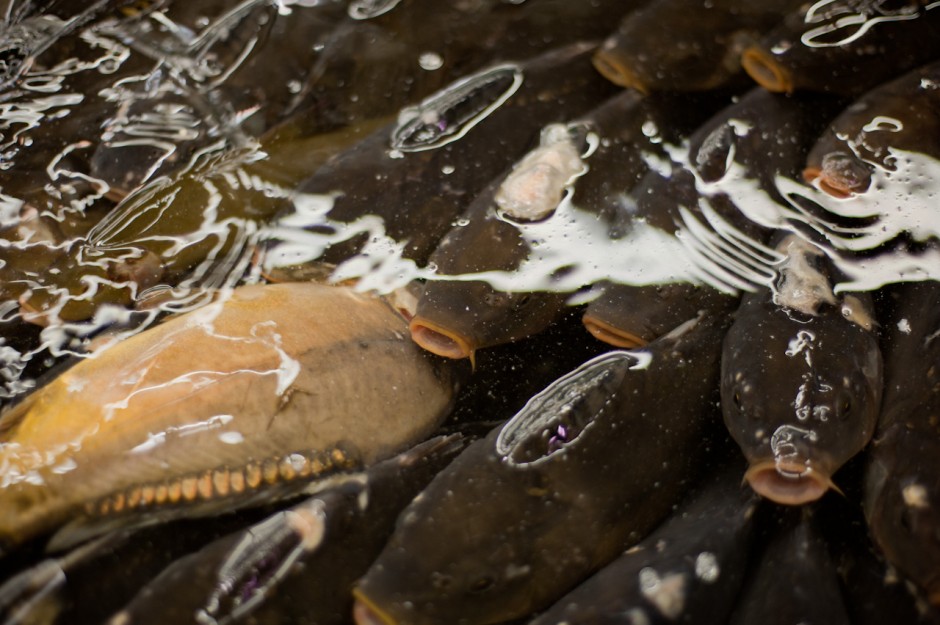 Carp in a supermarket shortly after Christmas. These are the lucky ones: Poles eat carp as the traditional Christmas meal but it has to be very fresh, so before the advent of supermarkets with large pools, people would instead buy the carp whenever it was available then keep it alive in the bathtub until the right time. After the carp has been killed and eaten, some of its scales will be kept and put in people's wallets for good luck. 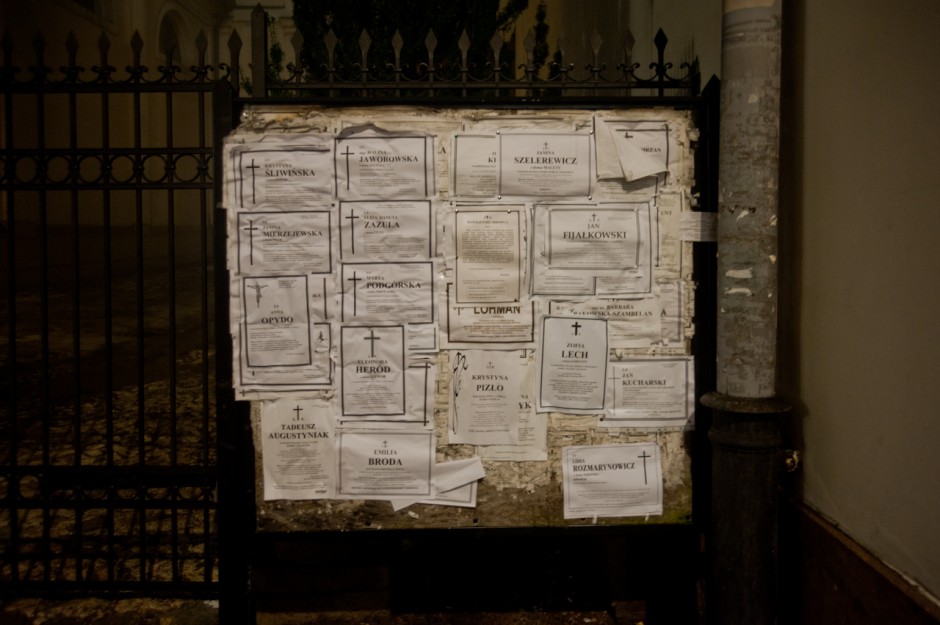 Death notices, called klepsydra, outside a church in central Krakow. When a person dies, an announcement is printed and put on the parish noticeboard to inform friends and relations of the date of the mourning and funeral, making the world's most depressing community board. 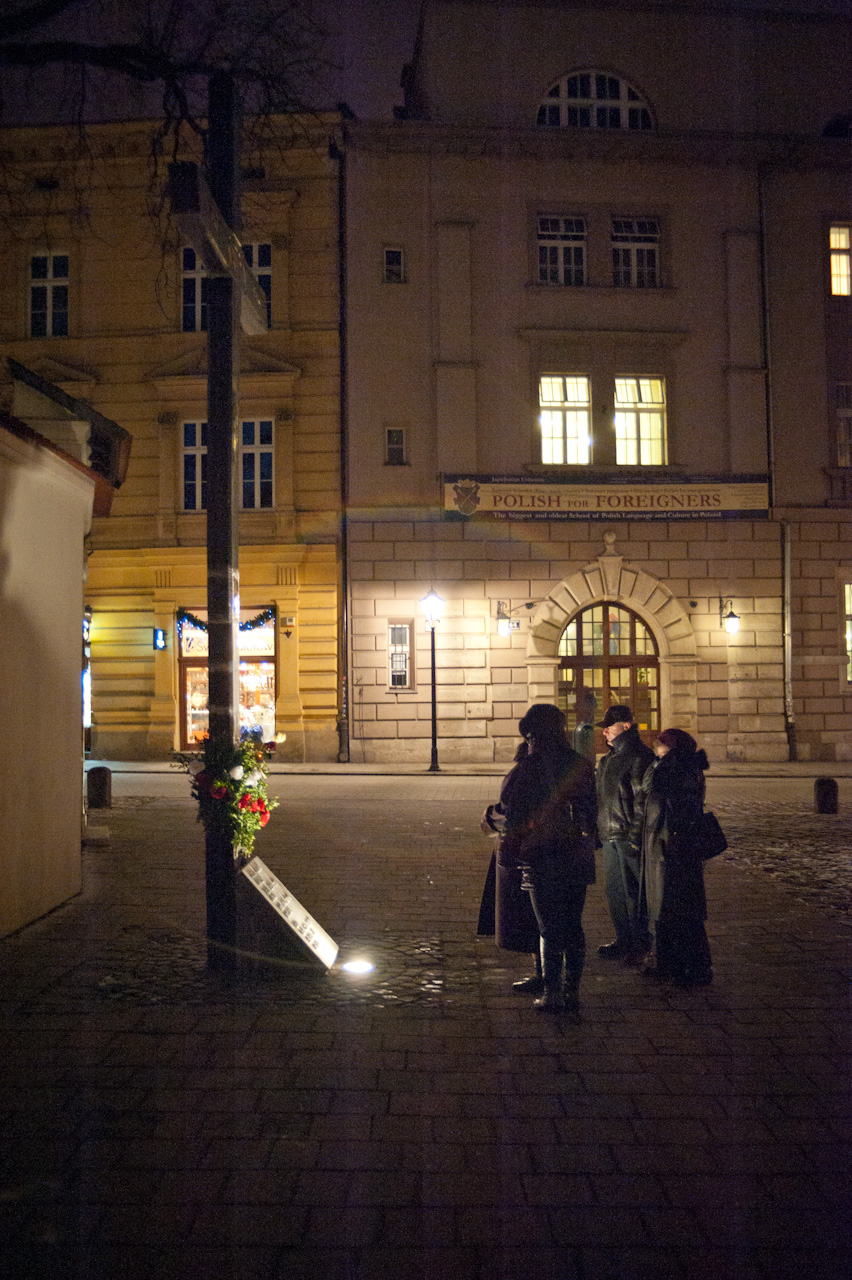 The memorial for the Katyn massacre victims, below Wawel Castle in Krakow, which commemorates the 22,000 people who were executed by the Soviets over two months in the spring of 1940. Those who were killed were chosen because they were educated senior members of society or because they held high rank in the army. The massacre is still a sensitive issue between Russia and Poland, especially after the events of April 2010, when Poland's then-president Lech Kaczyski and many other high-ranking officials were killed in a plane crash en-route to the 70th annual Katyn memorial service. 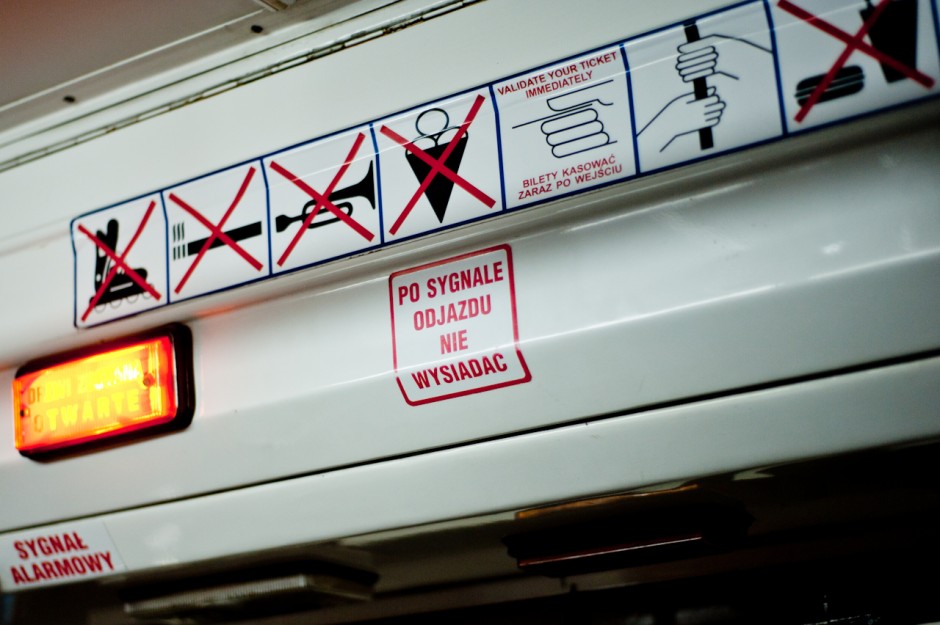 An extremely efficient message on Krakow's public transport which notifies passengers that as well as prohibiting the usual things such as eating and smoking, the public are also not allowed to rollerblade, toot trumpets or eat ice-cream. At least that's what it looks like. 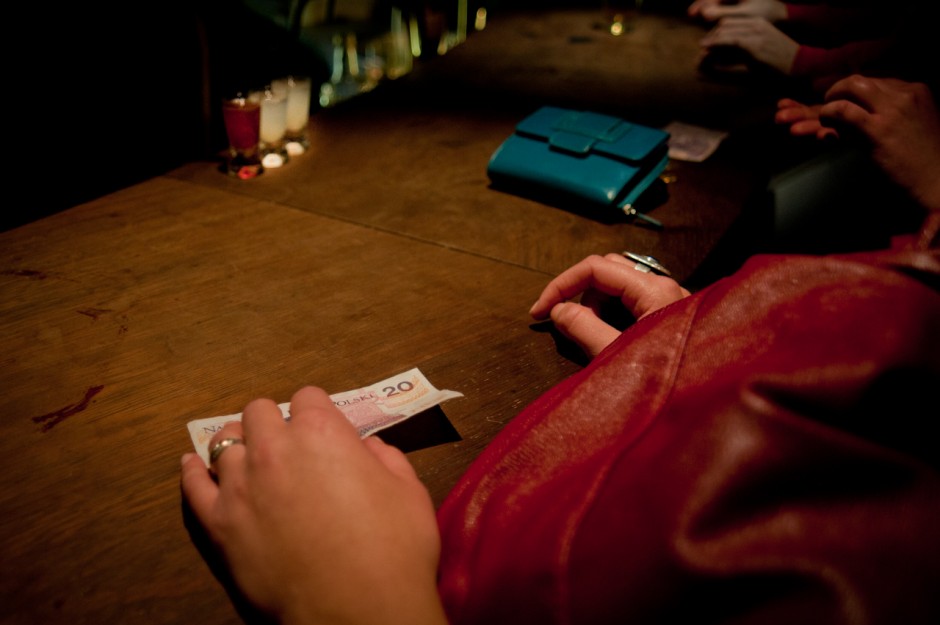 Clubbers buying shots (bania) at the bar in the new Piekny Pies club on Slawkowska Street, one of Krakow's best-known and most fun clubs. The name means "beautiful dog", and the place is eclectic to say the least, with a quieter bar upstairs and a raving nightclub downstairs. Though I never experienced the old venue its name lives on in legend, though it was forced to close down after the local school for the deaf complained about the noise. That's actually true.

Tagged
Budget Travel Trip Planning
What did you think of this story?
Meh
Good
Awesome
Sponsored

Riding the Visionary Wave in Poland