ONE OF THOSE countries that isn’t really a country, Transnistria covers 1,607 square miles of eastern Moldova, along the border with Ukraine. It’s often described as “one of the last remnants of the Soviet Union,” or even the “North Korea of Europe.” Due to various guidebook/Internet warnings about bribery and corruption at the border, it took me three months to work up the courage to hop on a train from my then-home of Odessa to Tiraspol, Transnistria’s capital.

Did expectations match reality? Soviet and a bit kitschy, yes; authoritarian police state with little to no capitalism, absolutely not. As for getting hassled or hit up for money by Transnistrian officials, I had no issues whatsoever. Crossing the border by bus or car may be more difficult and time consuming from what I hear, but apparently the situation in general has drastically improved over the past year.

A bit sleepy by day, Tiraspol was bursting with energy at night on the particular weekend I was there in late October, 2011. Transnistria’s population — especially its youth — face some of the toughest restrictions in the world in terms of opportunity and travel outside their territory, but this is by no means holding them back.

Cyrillic guide to places mentioned in the captions: 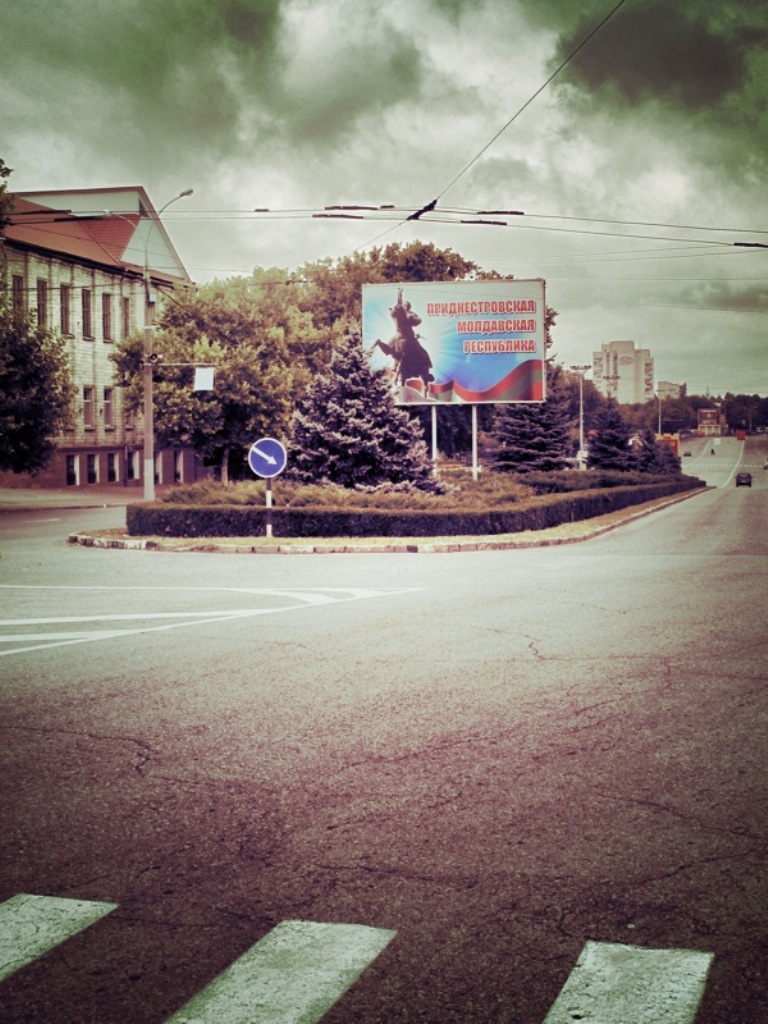 Welcome to Pridnestrovskaia Moldavskaia Respublika, or the Transnistrian Moldovan Republic. 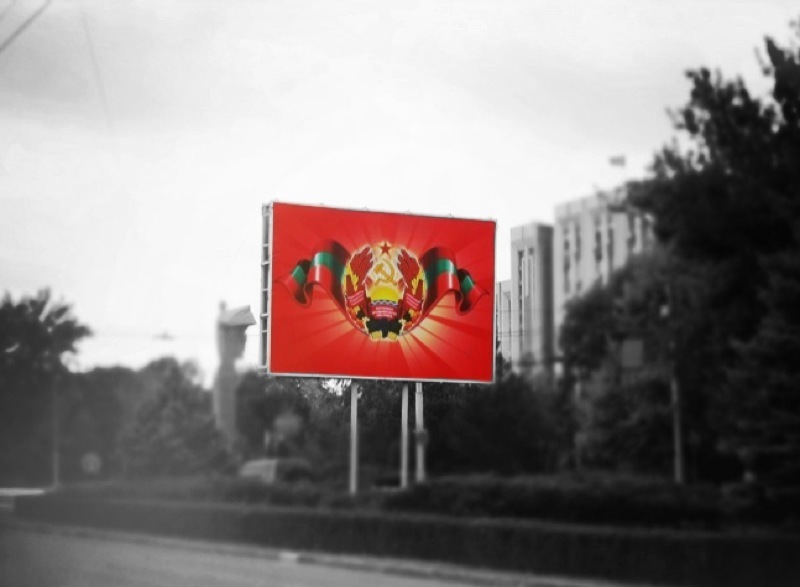 Transnistria initiated its breakaway movement from Moldova once the Soviet Union began to collapse. Moldovans were interested in an independent state, while Transnistrians wanted to stay connected to Moscow.

This was due to the fact that the industrial area of Transnistria was mainly populated by Russian-speaking migrants from other parts of the Soviet Union, while the rest of the country held on strong to their Moldovan language and culture. 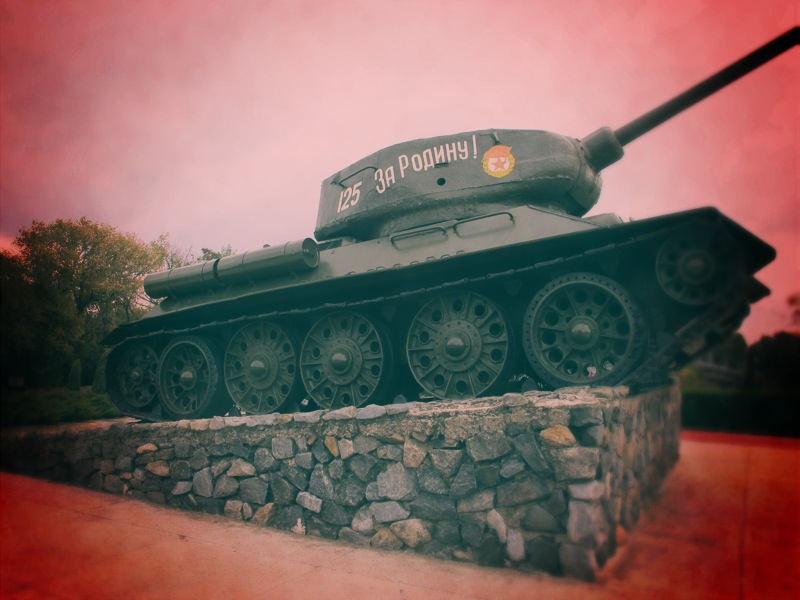 War ensued between the two sides in 1990. Transnistrians had a major advantage, as Cossacks and the Soviet 14th Guards Army were sent in to help them. Above is a tank still on display in Tiraspol's city center. 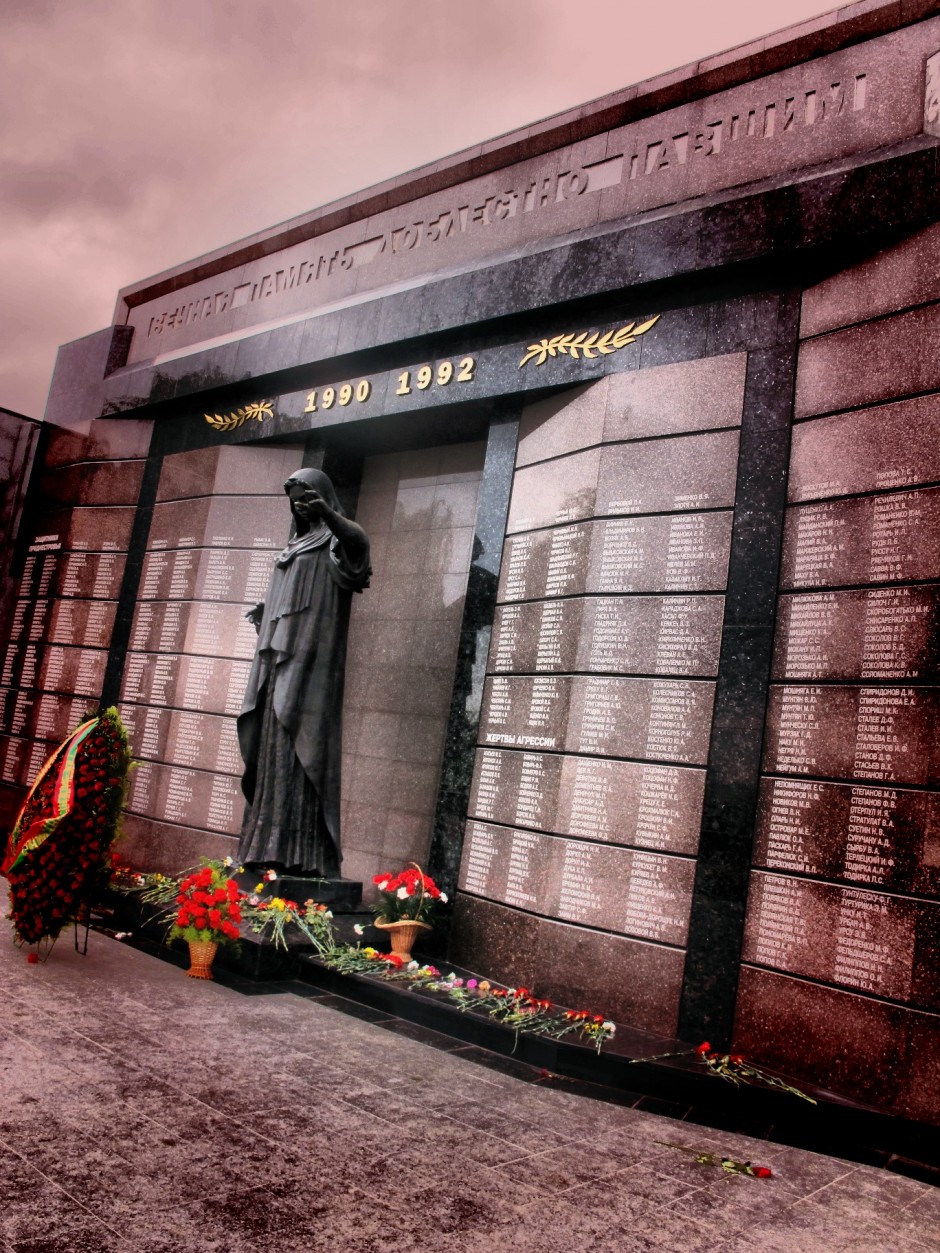 In July of 1992 a ceasefire agreement was signed, and Transnistria has remained a de facto autonomous territory ever since. Not far from the tank celebrating Transnistria's victory is a memorial to the war's victims. 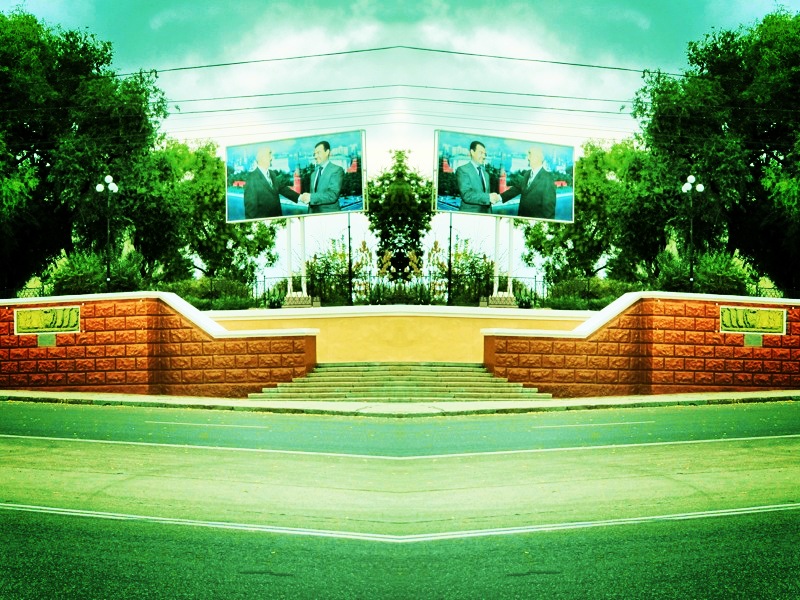 The ties that bind Transnistria and Russia are not the strongest, but they certainly have helped maintain autonomy here for the past 20 years. Since 1992, Russia has been a huge source of support, militarily and economically.

However, in late December, Transnistrians voted Smirnov -- Transnistria's first and only president since its breakaway from Moldova, pictured above shaking hands with Russian president Medvedev -- out of office. Independent newcomer Yevgeny Shevchuk replaced him. 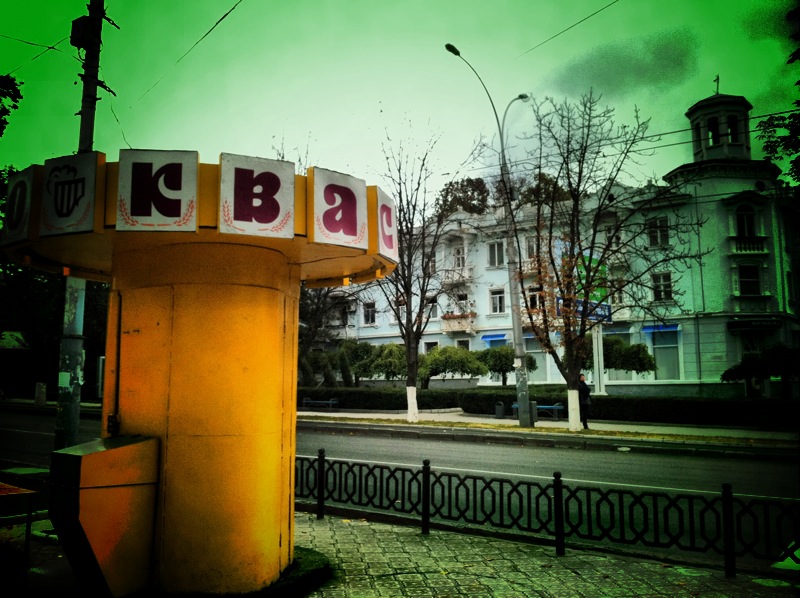 Often described as "frozen in time," Transnistria is full of concrete architecture, propaganda-like billboard art, and Soviet kitsch. These dated stands that once sold kvas (a fizzy low-alcohol beer, or "Russian cola") can be found all over the place -- unfortunately, no longer functioning. 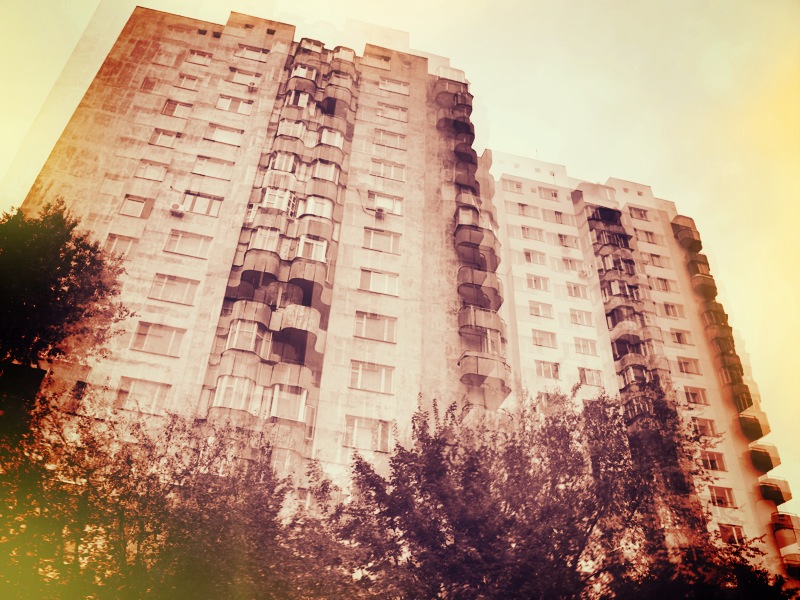 Imposing block of apartments above 25th of October Street, the city's main avenue. It's either on or off of this street that you'll find most of Tiraspol's points of interest. 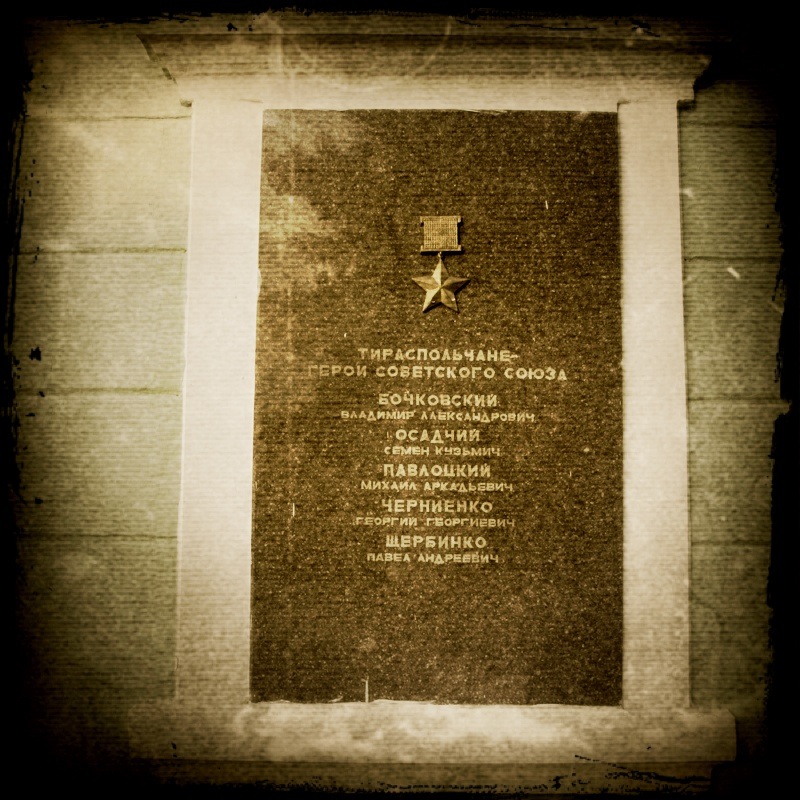 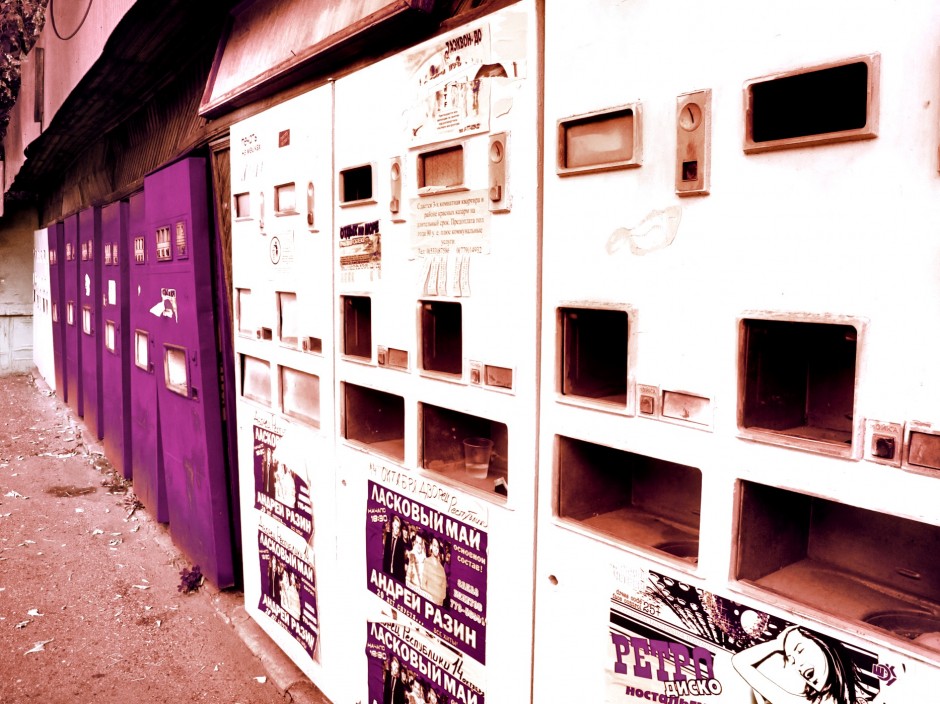 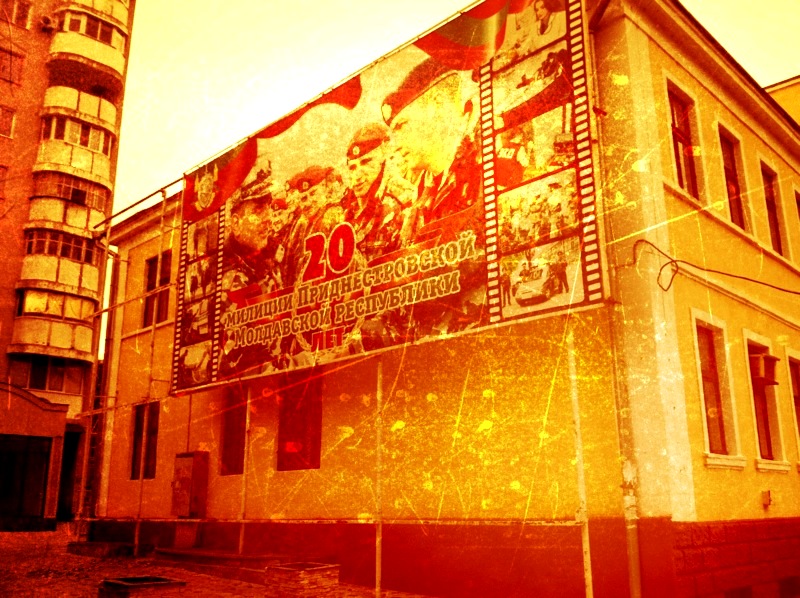 Russian, Moldovan, and Ukrainian are the three official languages of Transnistria, but Russian is most commonly spoken and is the language of government. Above is a huge celebratory billboard that reads: "20 years -- Pridnestrovskaia Moldavskaia Respublika Police." 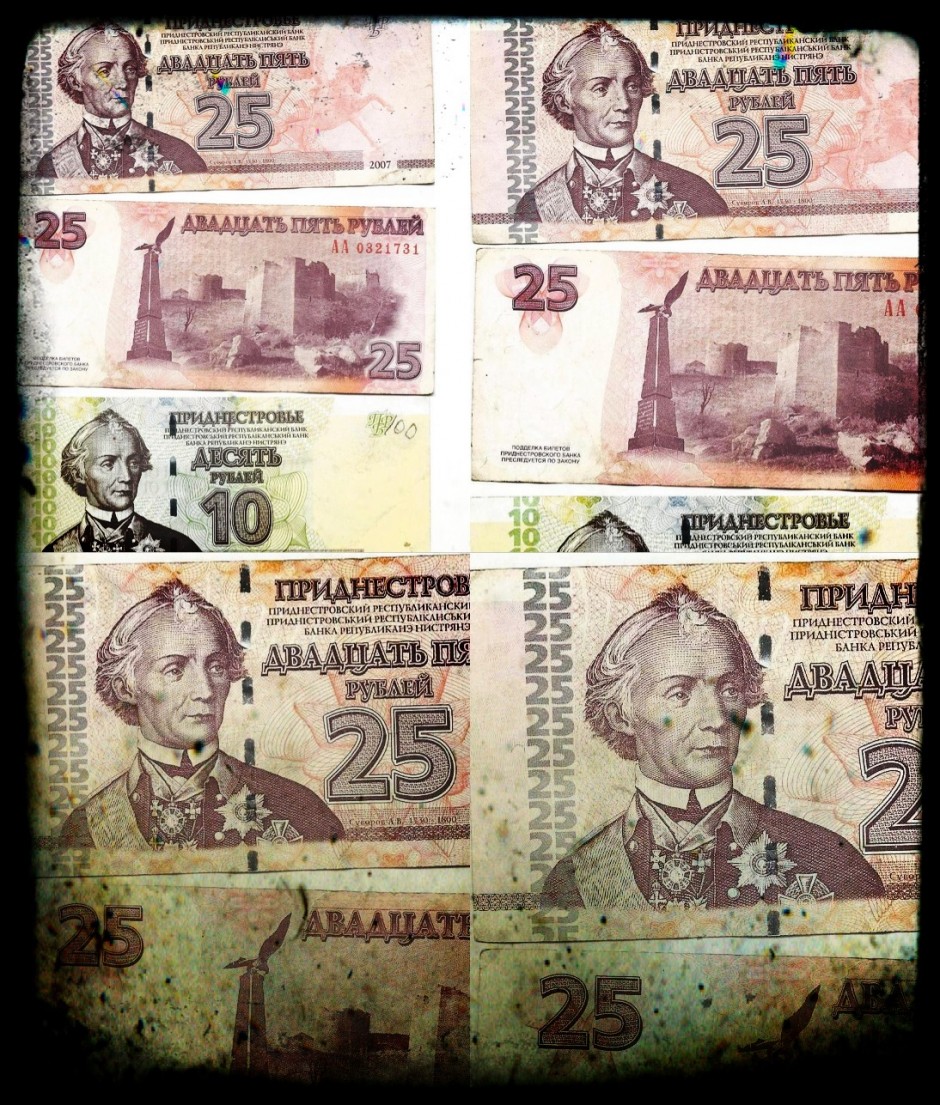 Euros and US dollars are the easiest currencies to trade for Transnistrian rubles -- a currency which will become entirely useless once you leave this place. With unrecognized autonomy comes unrecognized economy. 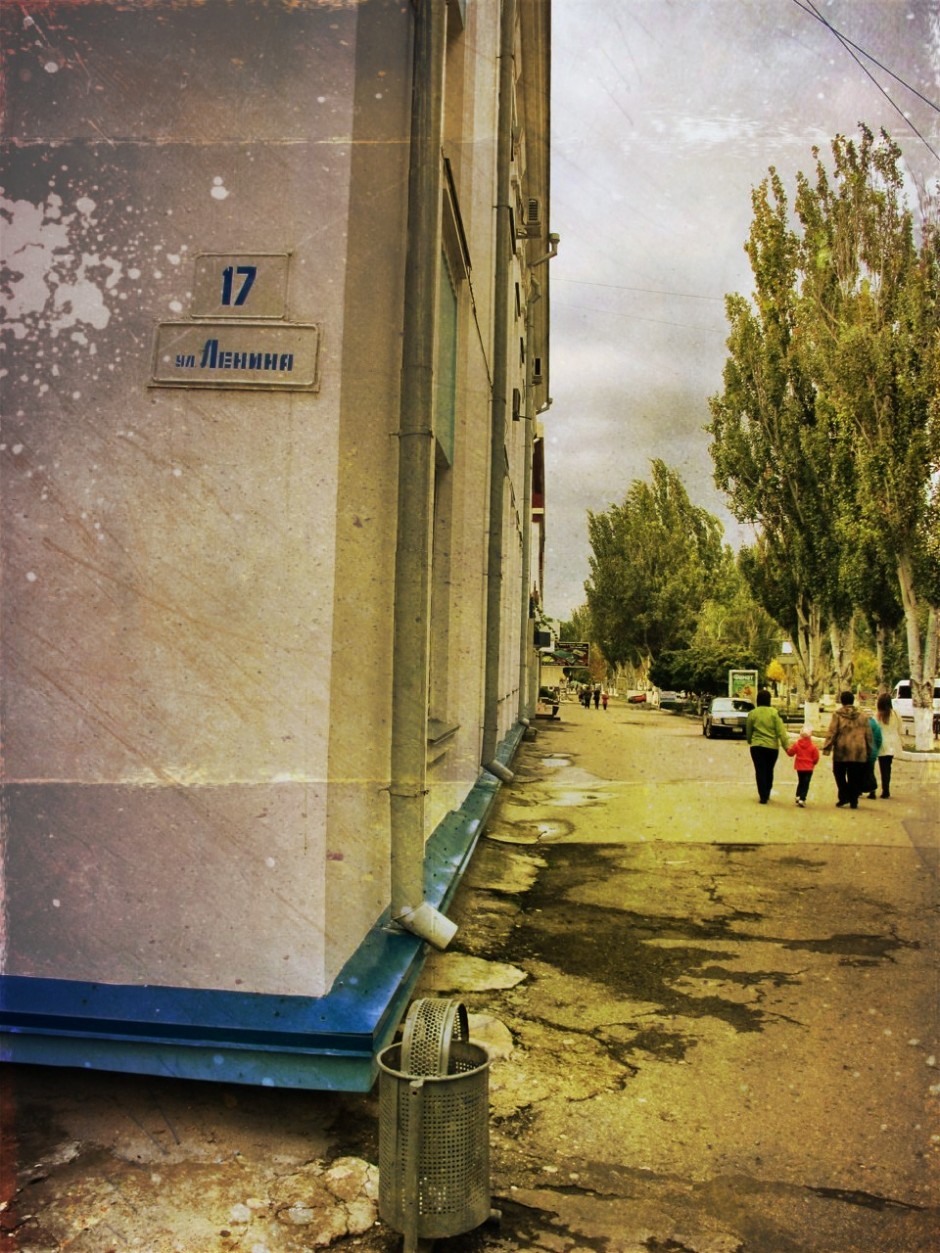 Another novelty of Transnistria is a visit to the post office. There's one right around the corner from this spot on Lenin Street. Pick up some Transnistrian stamps if you're a collector, or to send a postcard to a friend in Bendery, Transnistria's "second city." Like the currency, stamps here only function intra-territorially.

Good news is if you want to send your dad in California a postcard instead, you can also buy Moldovan stamps that will get it there. 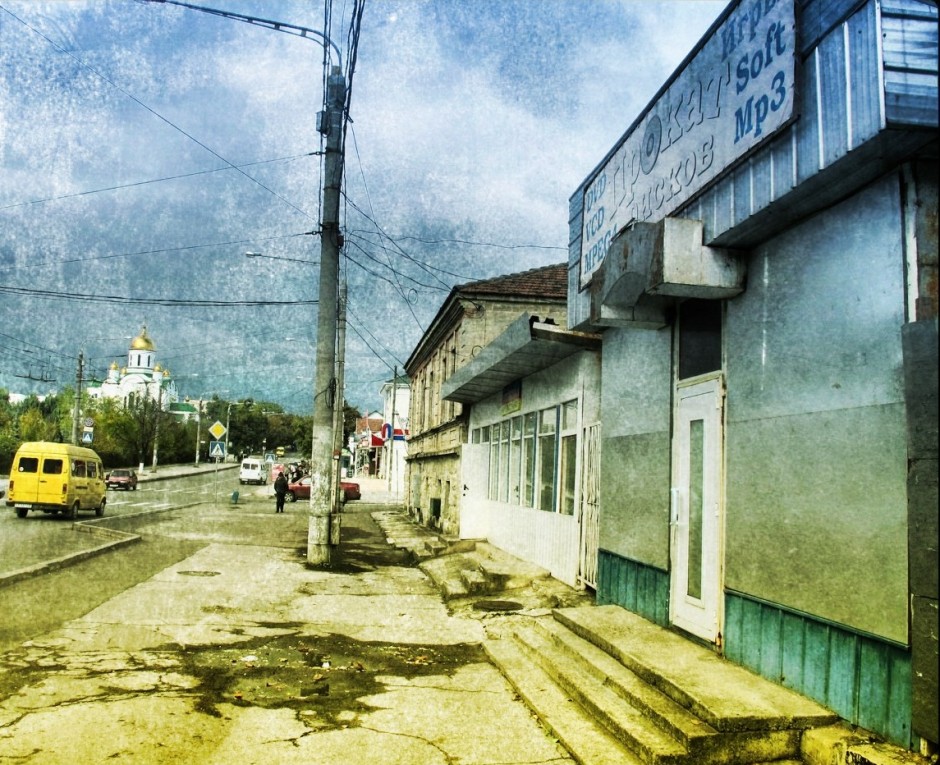 Tiraspol is not a big city, so if you're staying anywhere that says they're close to the center, odds are you'll be able to walk everywhere and won't have to worry about taxis or public transport. 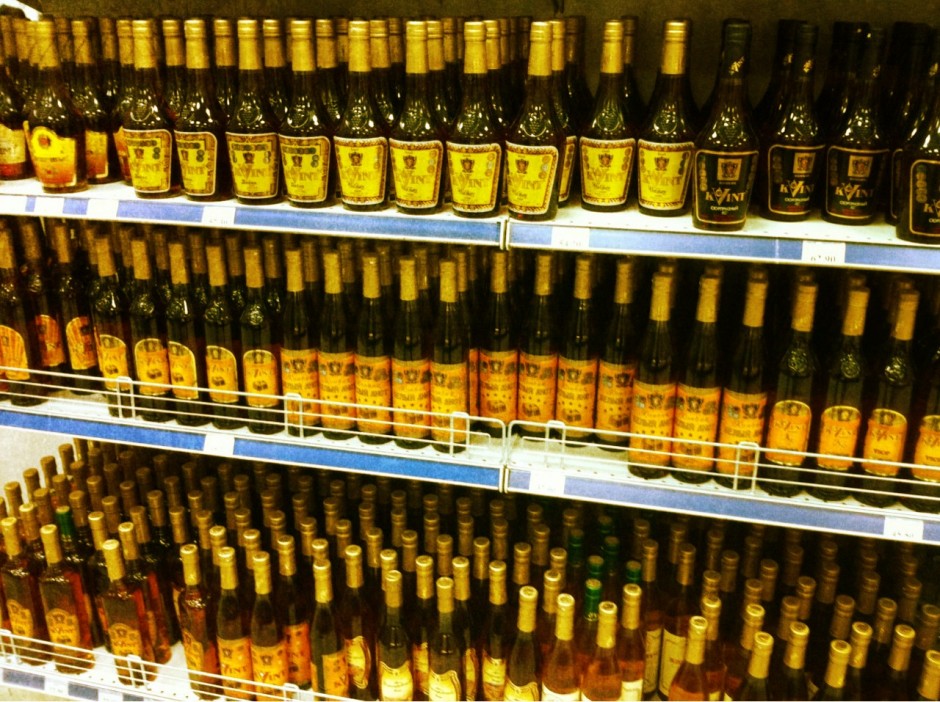 Transnistria has been labeled the "North Korea of Europe," though I'm not sure that North Korea has free wifi in its parks, or this much booze on its supermarket shelves. Award-winning booze, I might add.

Kvint, located in the city center, produces wine, brandy, and vodka and gives daily tours. As one of Transnistria's largest exporters, the company's distillery graces the five-ruble banknote. 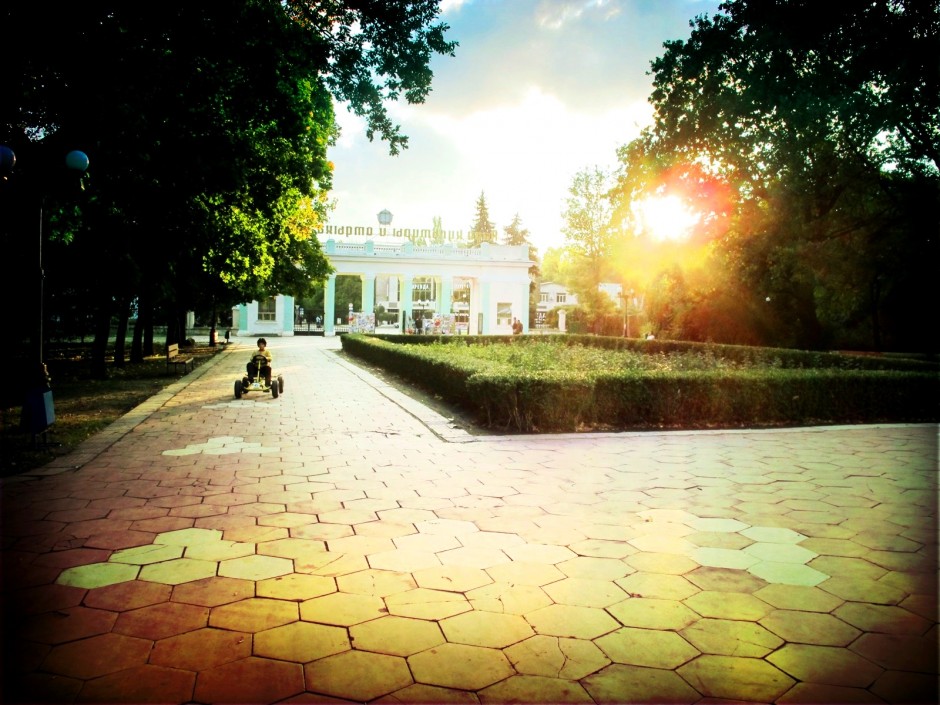 Speaking of parks, there are quite a few nice ones. This is one of the largest and most popular: Victory Park. 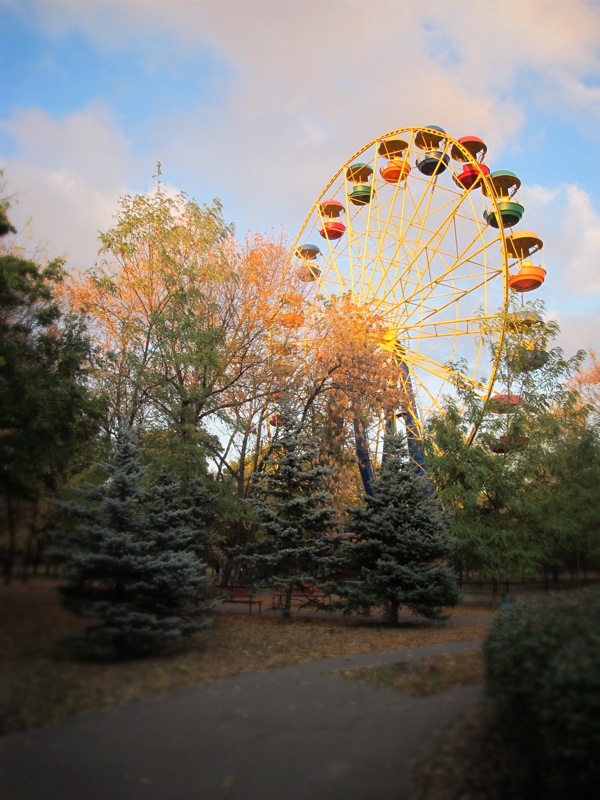 Although it wasn't running while I was there because it was too cold, I could definitely envision this place going off in the summer months. With no open container laws and an extremely low crime rate, partying in Tiraspol was a freeing experience, even in late October. 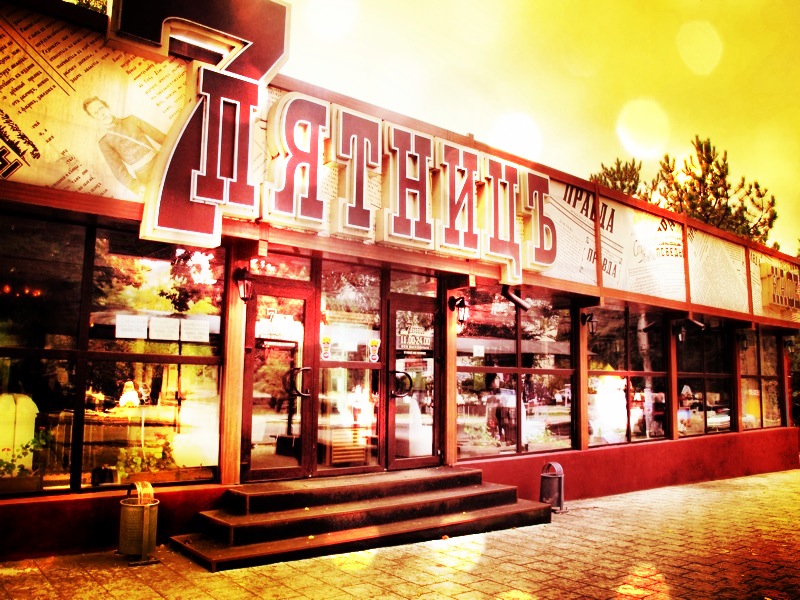 If you're going to party in Tiraspol, this is one of the spots to go -- 7 Fridays. It's been said that recently elected Yevgeny Shevchuk was a prominent late-night patron at this place not so long ago. 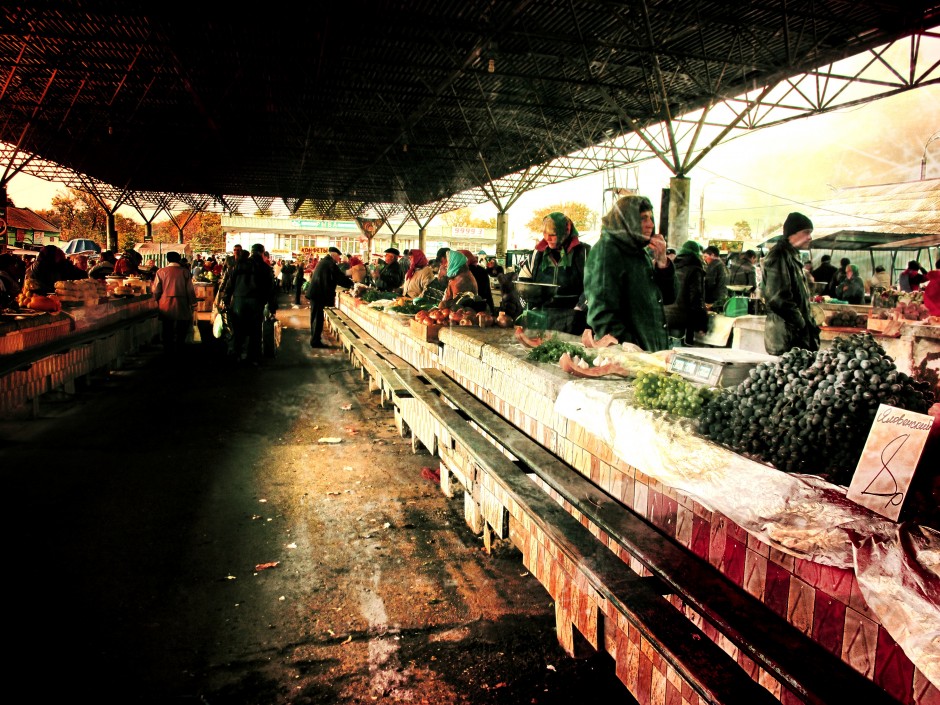 Central Market is a prime spot for people watching and bargaining with babushkas. 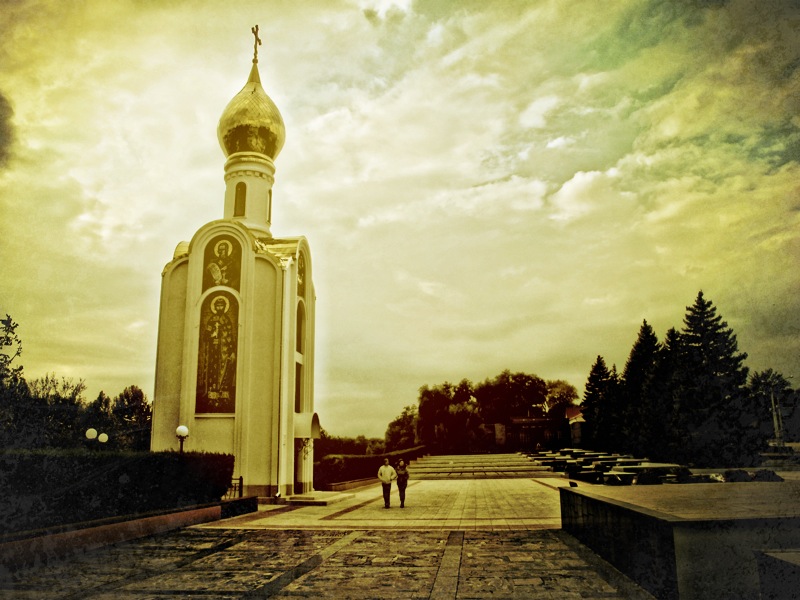 I'd read somewhere not to expect many churches or shows of religion while in Transnistria, which proved to be false. Right next to Central Market is the very large Orthodox Christmas Cathedral, where a wedding was taking place on the day I was there.

Also, just across the street from the offices of the president is this very tiny but beautiful church adjacent to the war memorials. 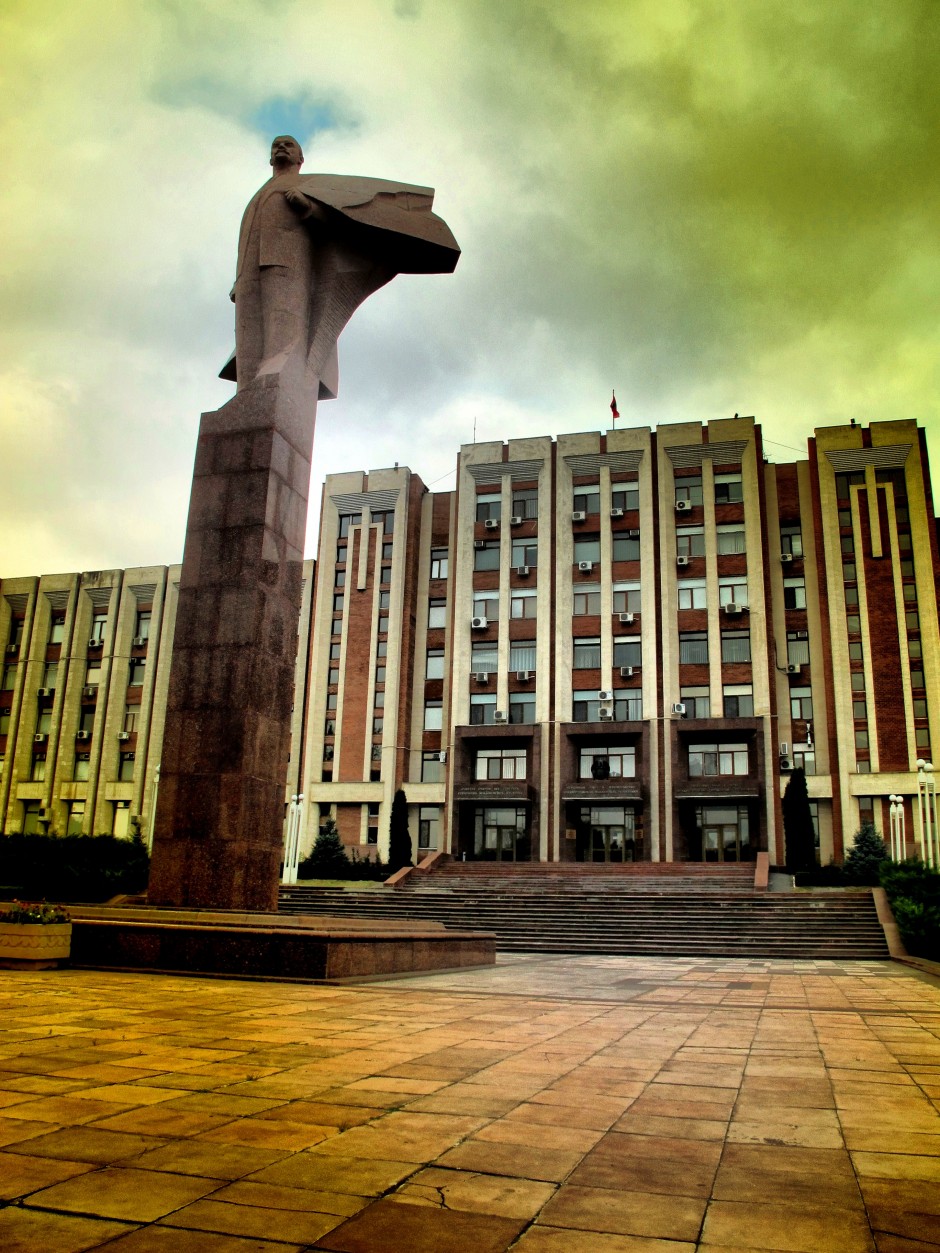 Quite the striking statue of Vladimir Lenin stands just outside the offices of the president. 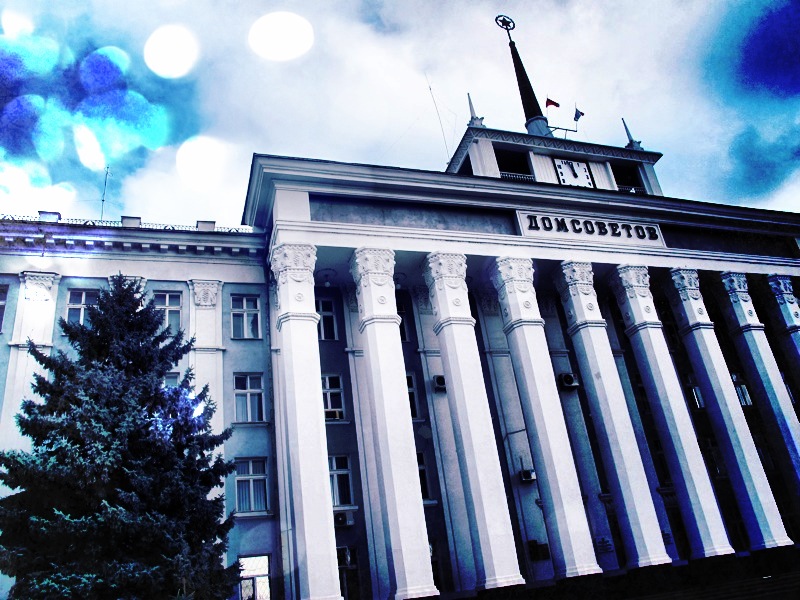 House, or Palace, of the Soviets

This building now hosts Tiraspol's city hall. It also has another enormous bust of Lenin (not pictured) that you can't miss when walking down 25th of October Street.