PATAGONIA IS MY FETISH. I’ve spent my savings, risked relationships, and quit jobs to venture south. Hell, I was riding my bike between El Calafate and El Chalten just three weeks before my wedding. And it all started after a six-week ski trip in 2004.

I tried to put Patagonia out of my mind. My job building snow bridges in northern British Columbia funded ski seasons in Whistler, a summer spent drinking on a cruise ship, and a MasterCard-abusive skiing trip to Scandinavia. Still, I couldn’t shake the mental images of South America. When January’s inevitable layoff came, I packed a backpack and booked a flight to the end of the world.

The plan was simple. Forfeit partying and seek adventure. Stories of deserted roads and crazy weather be damned, I’d hitchhike, trek, and camp the length of Patagonia.

By morning, I had picked out a moderate hike called Paso de la Oveja to get started. Too bad I never found the trailhead. Instead, I decided I didn’t need a trail. I’d simply bushwhack uphill along the river until reaching the first campsite. Four hours later, I stumbled out of thick forest to find an Israeli couple pitching camp.

Sliding my backpack off for a rest, I discovered I had dropped my tent. I cursed, swore, and laughed before heading back to retrace my steps. It’s hard to claim victory after spending half a day searching for something you shouldn’t have lost, but I felt inclined to try. The warm beer awarded to me by the Israelis tasted as sweet as champagne. Their ripped clothing, dirty faces, and worn backpacks proved they’d found their adventure. My spring-scented sleeping bag, trimmed beard, and factory-shined boots hinted I’d yet to begin.

It snowed 20 cm that night. 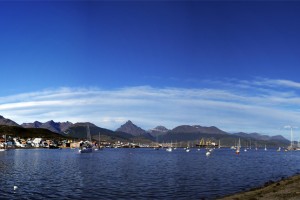 Whether it's the end of the world or the start of everything, Ushuaia is known as the world's southernmost city.

I made it through Patagonia in 2007 and landed in Mendoza, where I learned Spanish and met a Mendocina. Instead of flying home, I settled into an apartment smaller than a typical bedroom. By carefully balancing ski trips to Termas de Chillan, Portillo, and Los Penitentes with dinner dates, nightclub parties, and meeting her family, I managed to survive six months in the city.

Romina had never been on an overnight hike. She’d never slept in a tent. She’d never even been to Patagonia. Asserting myself, I bought a pair of bus tickets and formed a plan to introduce my girlfriend to my landform mistress.

My enthusiasm contradicted any common sense, so instead of a hike I knew, like the Nahuel Huapi traverse, or an easy route, like the Paso de los Nubes trail, I chose the hardest route I could find – Pampa Linda to Laguna Negra.

One hundred meters from the trailhead, we unlaced our boots, pulled off our pants and waded across a glacier-fed river. From there, we climbed straight up to Laguna Ilon Ilon. By the time I’d taught Romi to pitch the tent and light a MRS stove, I realized my hike selection was too ambitious. As we slept, the sound of rain on nylon provided the perfect excuse to back out.

The knee-deep river we’d crossed a day earlier began to resemble a highlight clip from some adrenaline-fueled whitewater kayak video. Packing a convenient anchor-like body weight, I opted to cross first. Romi, however, was too impatient to wait her turn. 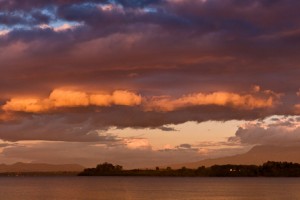 Four steps into her crossing, the current ripped away her footing and pushed her downstream. Chalk it up to fear and adrenaline, but her manicured nails clawed into the safety rope and refused to let go. She managed to scream my name before her head sunk into the waters. I rushed back, threw her on my shoulder and scrambled for shore.

Romi spit out water as I searched for solid footing. When I dropped her onto the riverbank, she didn’t cry, she didn’t blame me. She just laughed and I knew we’d be engaged soon.

With our wedding fast approaching, Romi and I did what almost nobody expected: left town. A bus from Mendoza to Santiago, Chile, followed by a flight to Punta Arenas and a second bus to Puerto Natales left us nearly 3000 km from our nuptials. We figured we could bike there just in time. After crossing back into Argentina, we landed on the Ruta 40 and rode its gravel pathway north.

Everybody claims Patagonian weather is unpredictable. Obviously, they’ve never been. Wind blows from west to east. Every day. All day. If the weather is nice, it’ll either rain or snow soon. If the weather is miserable, it’ll get worse. Eventually, however, it has to get better.

On our first day tail winds carried us at 30 km/hour without pedaling, headwinds limited us to 2 km/hour on a descent, and Romi blew off the road. We saw snow and sun in El Chalten and heard locals claim the wind never stops in Tres Lagos. It rained in Esquel, Trevelin, and Parque Nacional Los Alerces.

It took twenty days riding, twenty-seven nights camping, two flat tires, a handful of broken bike parts, and a single roadside fight to reach Bariloche. We were ready to get married.

Our honeymoon? Continuing north along Ruta 40 from Bariloche to Mendoza.

A year after cycling Argentina’s Ruta 40, I realized another trip to Patagonia wasn’t happening. We had a trip planned to northern Argentina and we’d applied for Romi to immigrate to Canada. I wouldn’t even have a chance to say goodbye.

Then, an email arrived laced with a glimmer of hope — ExperiencePlus! Bicycle Tours had invited me on its Patagonia-based Pedal the Andes Plus Chiloe tour. I jumped on the first bus south, seduced by the opportunity for a final Patagonian adventure.

On this trip, I traded in campsites for four-star hotels; freeze-dried means for asado; headwinds for summer breezes; independent schedules for a group tour. I had two tasks: pedal and pictures. We climbed across the Andes, circumnavigated Lago Llanquihue, and pedaled to the base of Volcan Osorno. We ferried to Chiloe Island, ate curanto, and marveled at wooden cathedrals.

I’d battled Patagonia for four years and it finally relented with eleven days of bliss. 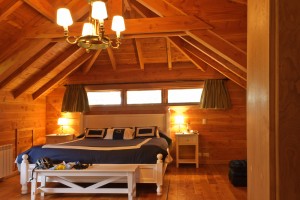 My home isn’t a town or city. It’s large swaths of northern Alberta and British Columbia. Growing up, I never realized it was an adventurer’s paradise; I’d always dreamt of Patagonia, but the world outside my childhood bedroom window isn’t much different than the Southern Cone.

In a given year, we’ll see 80-degree swings in temperature and snow in any or all twelve months. Locals plan for both sunburns and frostbite.

Now that I’m back in Canada, I can’t venture to Patagonia on a moment’s notice. Instead, I’ll bring its spirit to Canada with a new series of adventures. And for the first time in years, I have a full quiver of gear to use: hiking boots and backpacks, bikes and panniers, touring skis and avalanche gear, kayaks and waterproof stuff sacks, fly-rods and hip waders, and bear spray and 12-gauges.

Tagged
Hiking Insider Guides Argentina
What did you think of this story?
Meh
Good
Awesome