MATADOR recently traveled to South Africa to experience the phenomenon of Singita — the most successful high-end safari brand in sub-Saharan Africa.

Singita has lodges in Tanzania, Zimbabwe, and South Africa and is building new projects in Rwanda and Mozambique. We got the chance to experience four of their lodges in South Africa.

In this photo essay, you’ll get an idea of what it’s like to be a guest at Singita’s Kruger properties: Lebombo and Sweni. 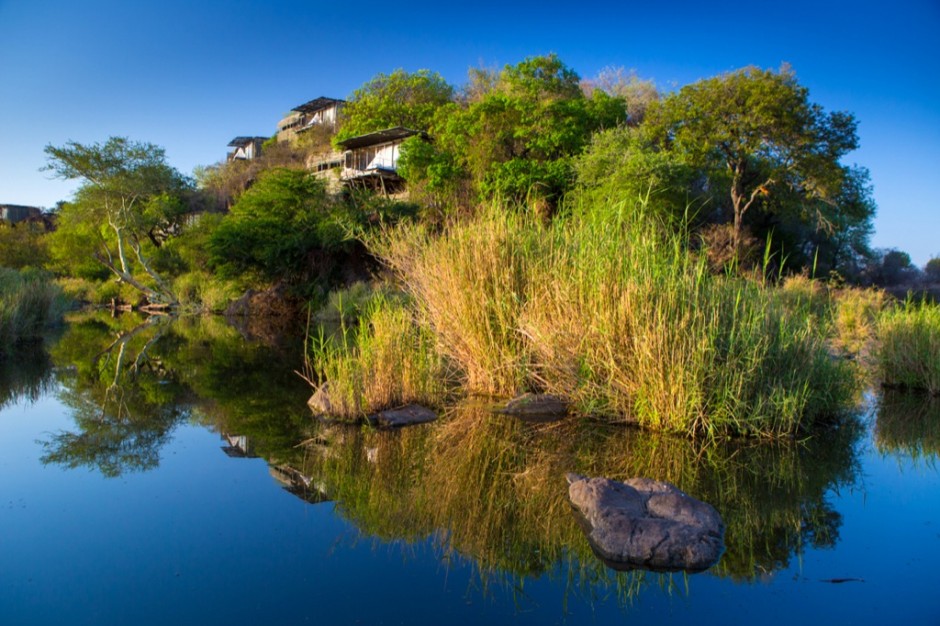 Looking up at the suites of Lebombo

The rooms at the Lebombo lodge are spread across a ridge that runs right down to a major river in the park. We stayed at one of the suites pictured here, which looks out directly over the river. Although it’s a longer walk to and from reception, the sights and sounds of wildlife at the river made it feel like we were out on a game drive even during downtime at the room.

The center of community life at Lebombo happens here in this massive and architecturally impressive commons area. It's an open-air space where every day begins with coffee/tea and breakfast. Everything from the view to the art and furniture makes this room unforgettable.

See more: Singita: The best safari lodges in all of Africa

I've been on many safaris, and I know how rare it is to see a live hunt take place. We'd spent 20 minutes watching this beautiful female cheetah stretch out after a nap as if she was preparing to hunt. Two other Singita Land Rovers sat next to ours, waiting for the action to begin. No impala crossed the open field where she lay in wait, and everyone was getting antsy. The sun was hot, and the other two vehicles gave up and moved on. Luckily we stuck with her and drove parallel to her as she switched strategy and stalked into thick brush. Almost immediately, she ran right into some impala in the trees, and the chase was on. 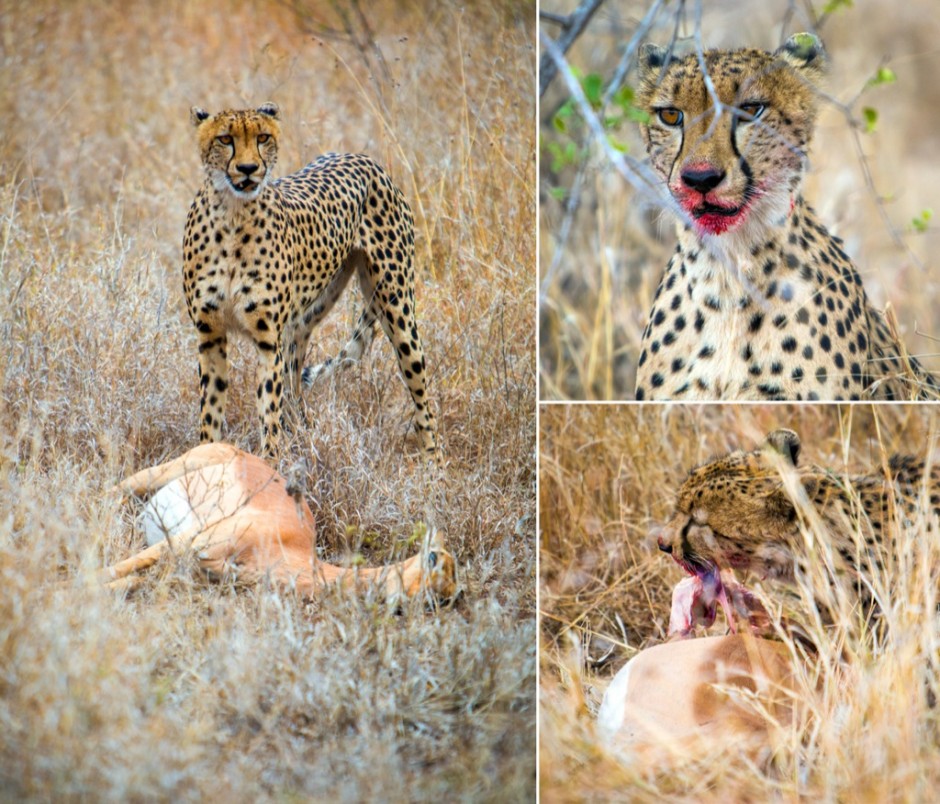 The kill…and a short-lived victory

Quickly, our guide spotted where the cheetah had tripped up the panicked impala and had her by the neck, asphyxiating her with a death grip. We drove up so close to the kill that it startled the cheetah, and she momentarily loosened her grip on the impala as she looked up at us. The impala made one more desperate attempt at escape, but with a few bounds, the cheetah had her again, and it was all over. The cheetah lay beside her kill and rested for a full 20 minutes before feeding. Another half hour passed, and the cheetah was chased off the kill by a large male lion who had seen the vultures circling from miles away. 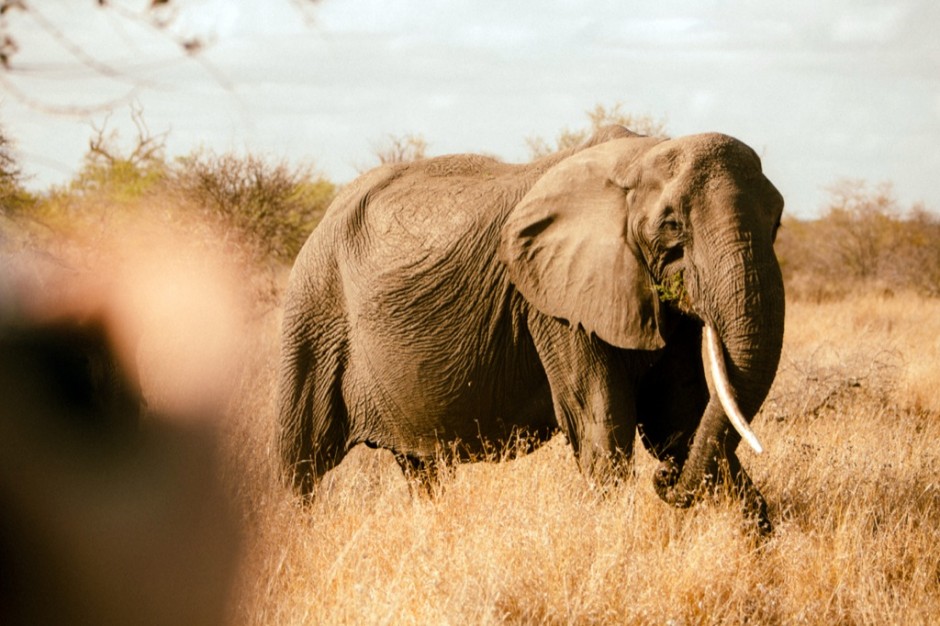 One of the many dozens of elephants we saw in our four days at Lebombo and Sweni. 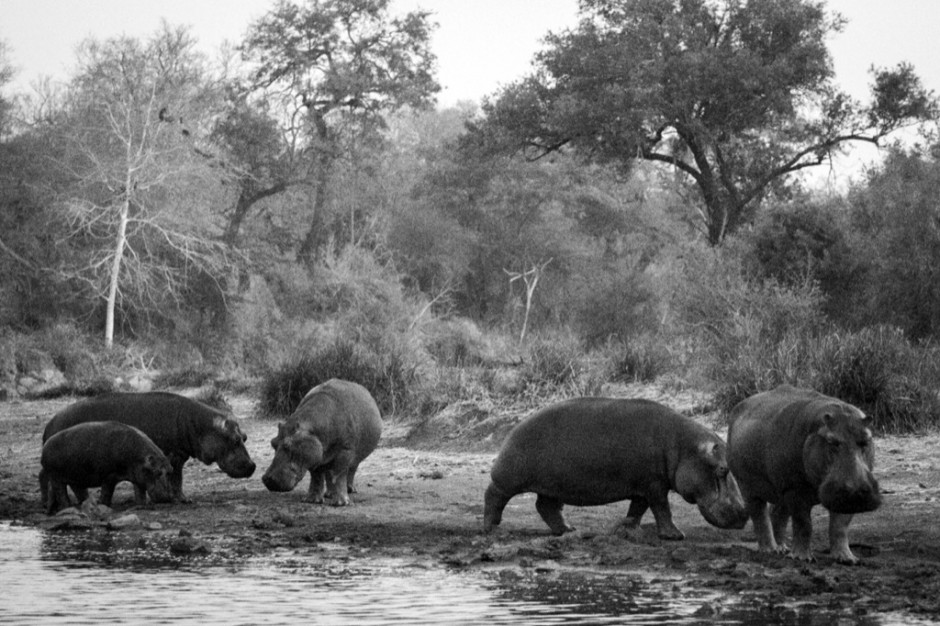 Hippo out of water!

A semi-rare sighting, this pod of hippos decided to reveal themselves to us just after sundown. Hippos typically spend 95%+ of the day in the water to protect their sensitive skin, and they get out at night to feed on plants along the bank. By the numbers, hippos are also Africa’s most dangerous animal, and since they feel safest in the water, finding yourself between them and the water when they're on land can be a deadly place to be. 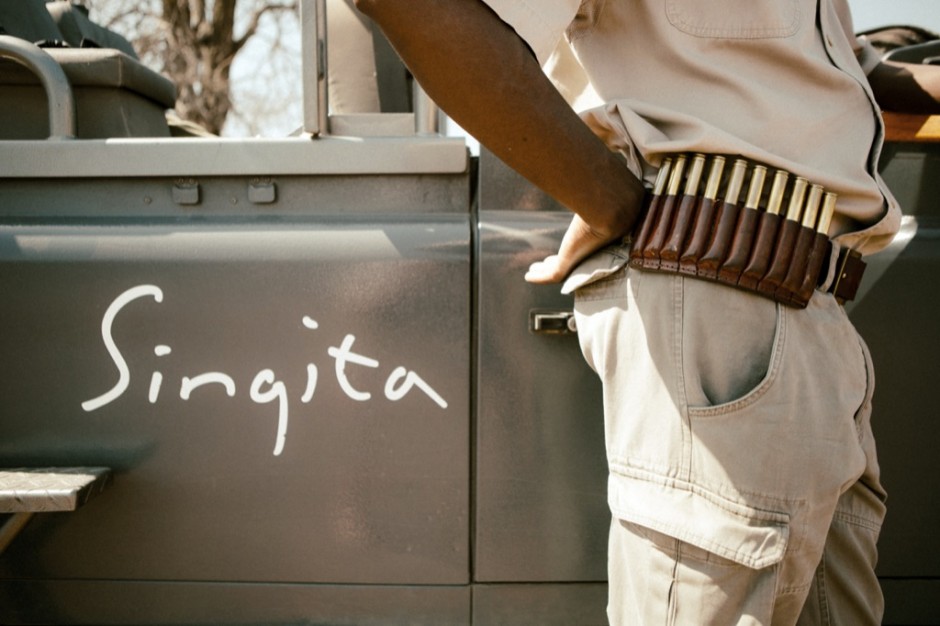 Knowledge, not bullets, keeps you safe

Although every guide at Singita carries a rifle in each Land Rover and wears a belt full of bullets, they’re never used. Each guide brings a wealth of knowledge to the table regarding animal behavior and how to stay safe in the bush. 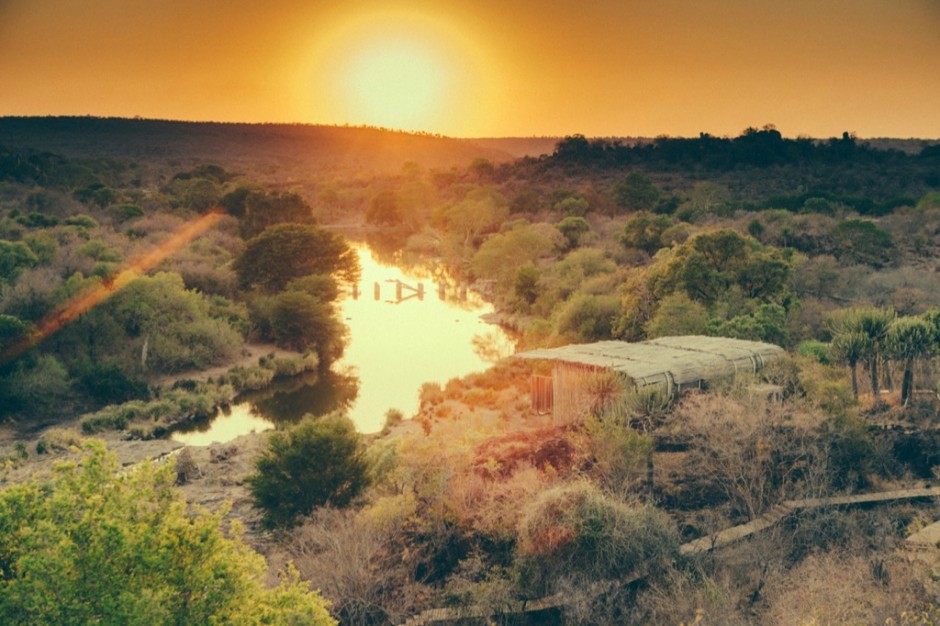 A roof of one of the suites at Lebombo looking out on the river below. 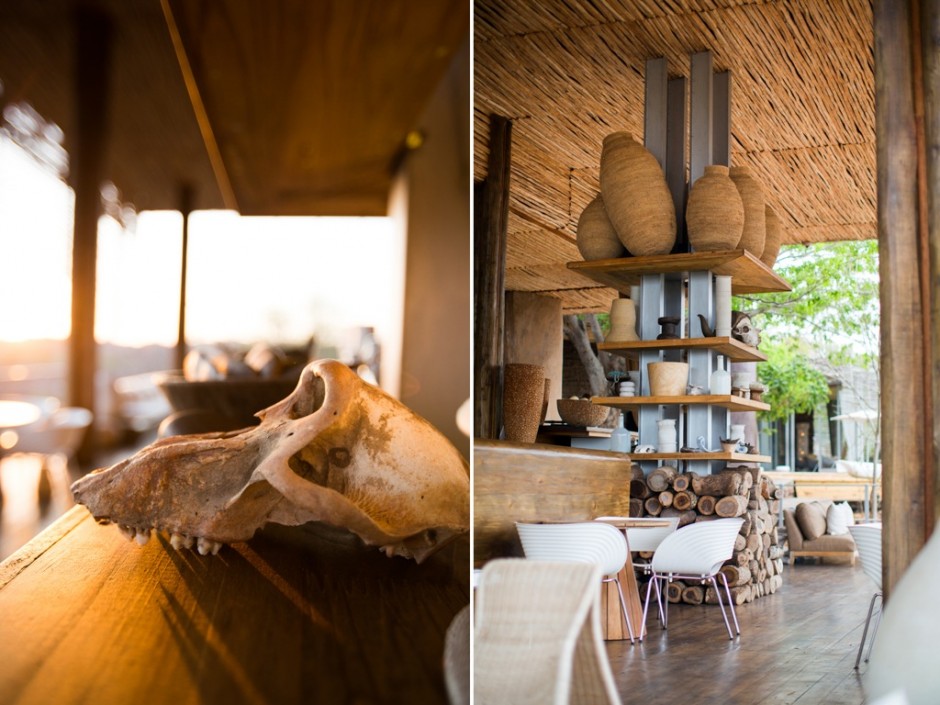 Much like Singita’s other South African resorts in Sabi Sands, Lebombo is full of amazing art, natural history, and local artifacts. 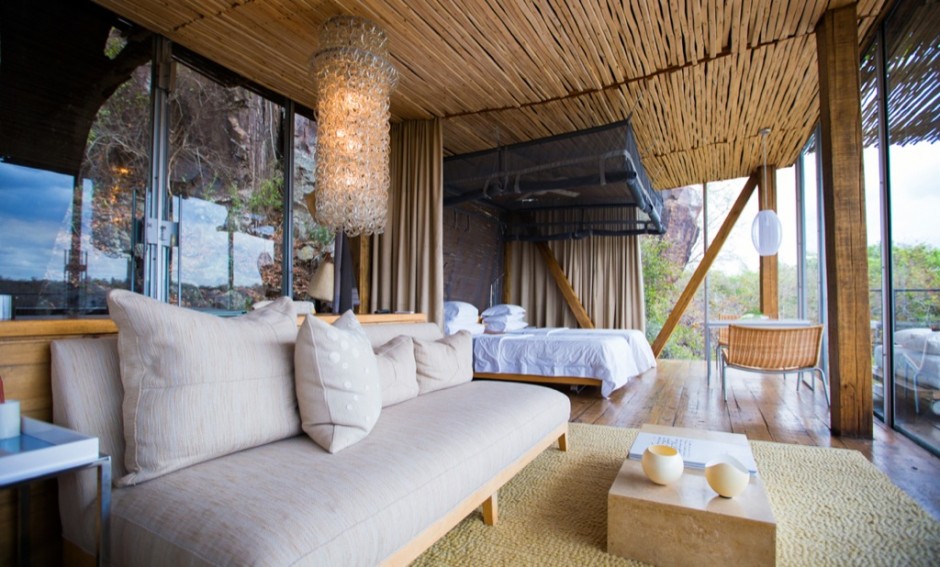 Like the common spaces at every Singita property, the suites are all super stylish, but the real genius of these rooms is their isolation from each other and the privacy guests enjoy. 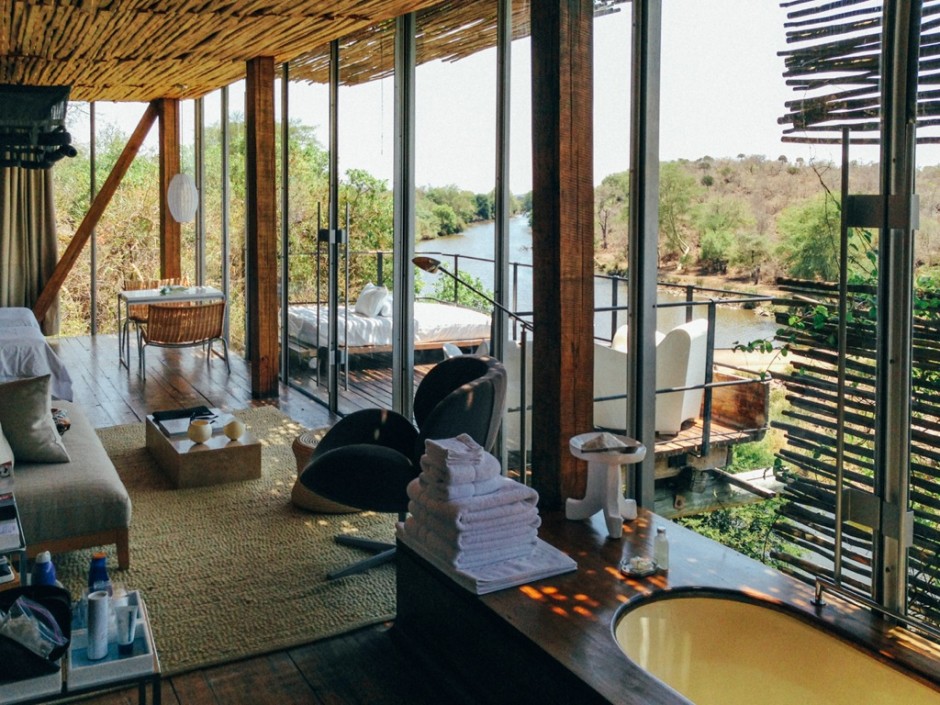 Somehow they’ve spaced each room out from the next so that each guest room has complete privacy from other guests and staff, as well as an individual and intimate connection to the surrounding nature. 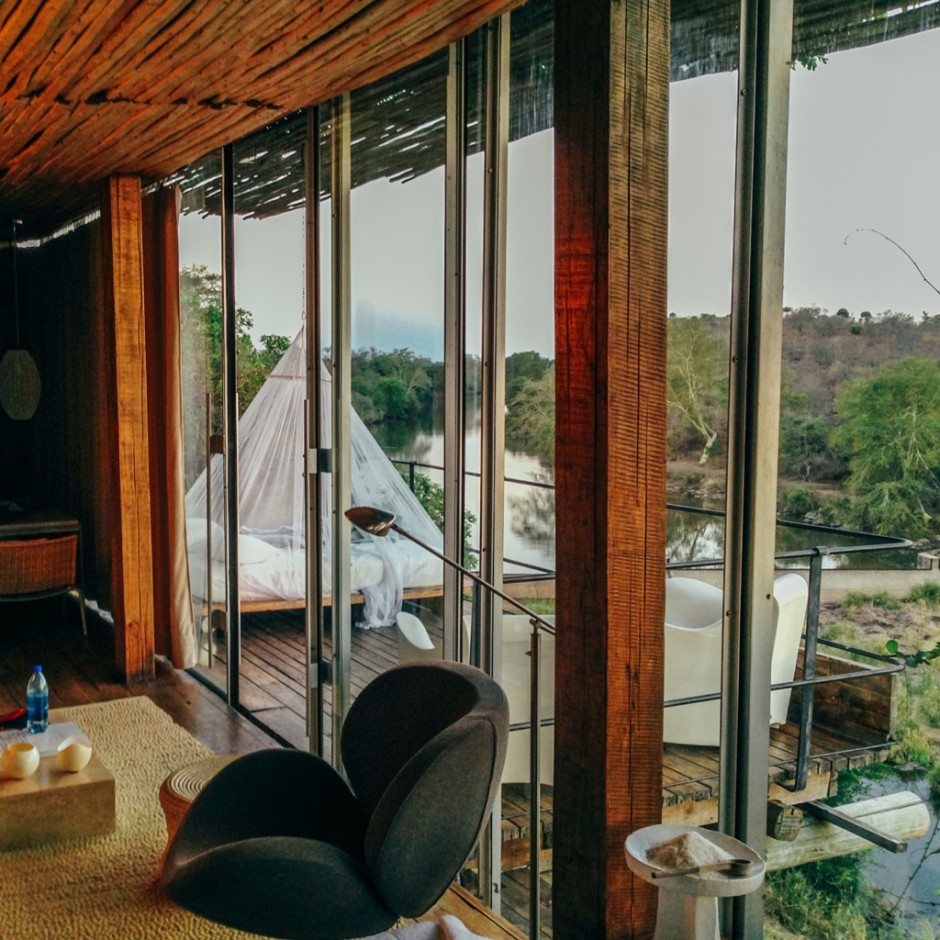 Sounds of the night

One of the nights at Lebombo I woke up at 4am, and instead of going back to sleep I went out and lay under the mosquito net, which the staff hung above the deck bed each evening. I listened to the night for hours—a thrilling dialog of wildlife from buzzing beetles to lions roaring at each other right across the river.

The buffalo and the bird

A Cape buffalo pants like a dog in the heat of the day, while the charismatic red-billed hornbill surveys the plains below his perch. 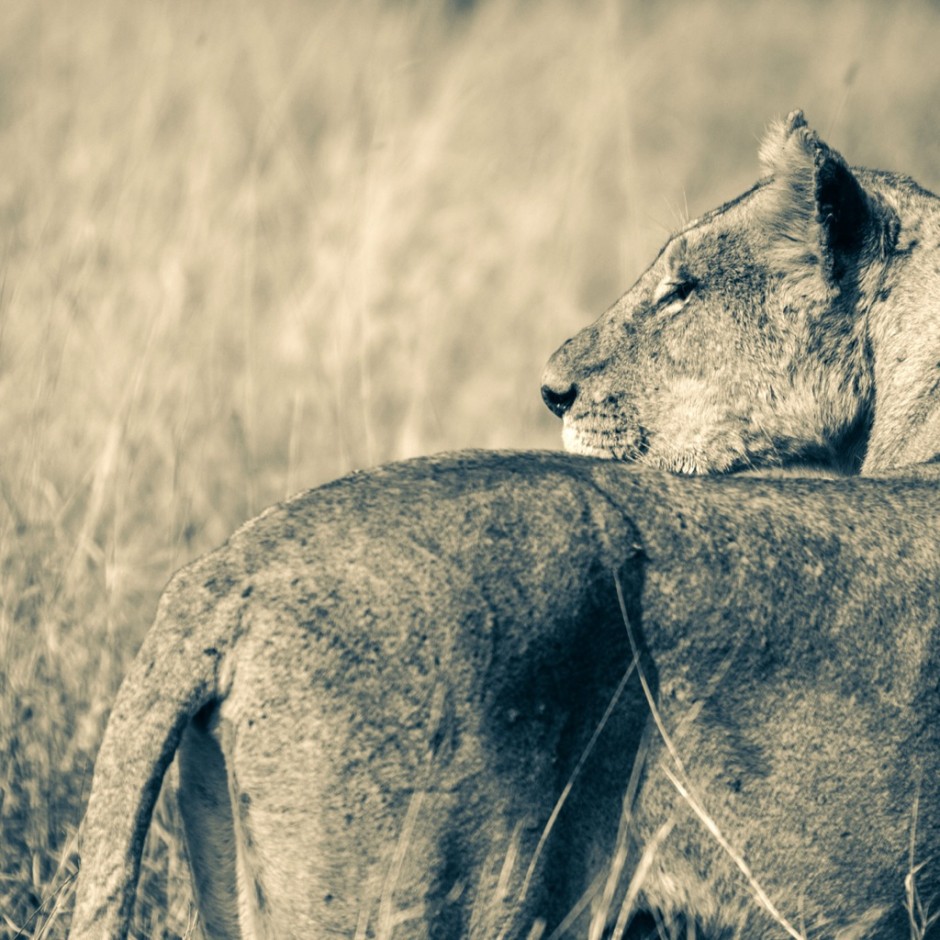 If you want to see cats, this is the place to be. Lebombo and Sweni are well known for their big cat populations, especially lions. This makes for a very competitive landscape for the male lions in this part of Kruger, as they compete for rights to the females.

This large male, who we found with a full stomach fresh off a feast, has been the dominant male in one of the local prides for three years and has the scars to prove it. Three different younger males are now trying to push him out, and it likely won’t be long till he either dies in a fight or strikes out on his own and abandons the pride. 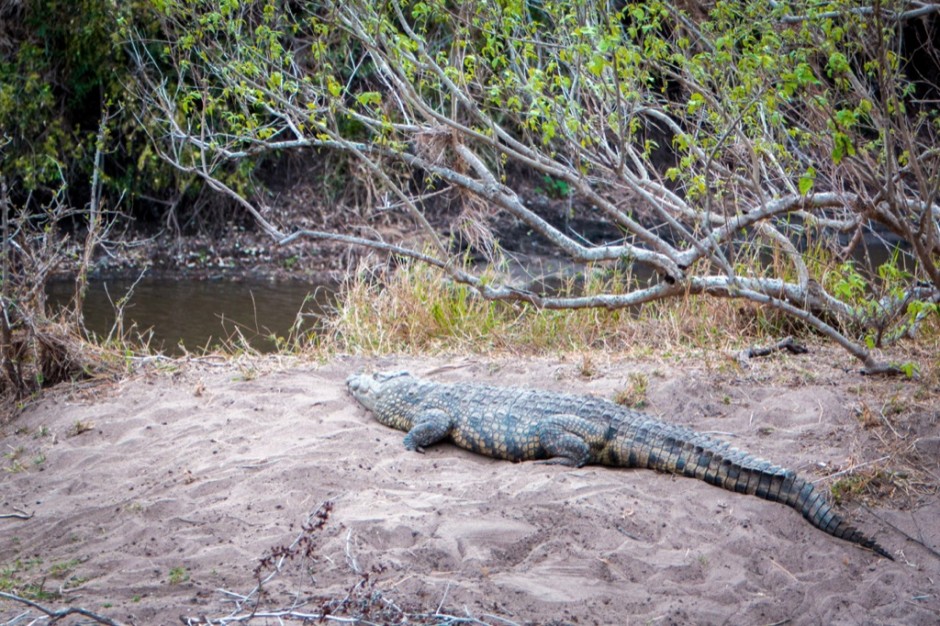 The river that runs through this part of Kruger is teeming with crocs. If you see them lying on the bank basking in the sun, they’ll seldom move a muscle, but when they want to be they're fast—on land and in water. 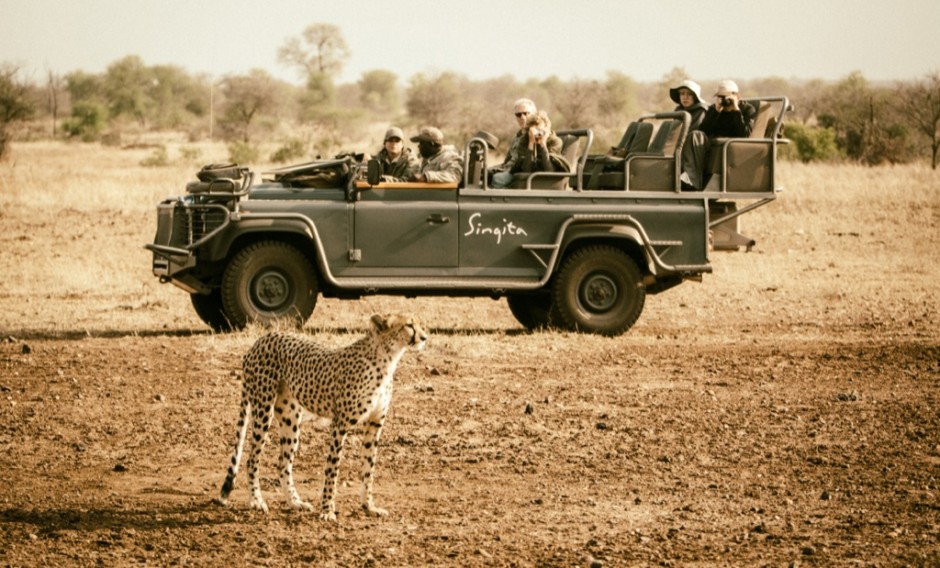 Singita guests wait for a female cheetah to show them the speed and grace of an evening hunt. 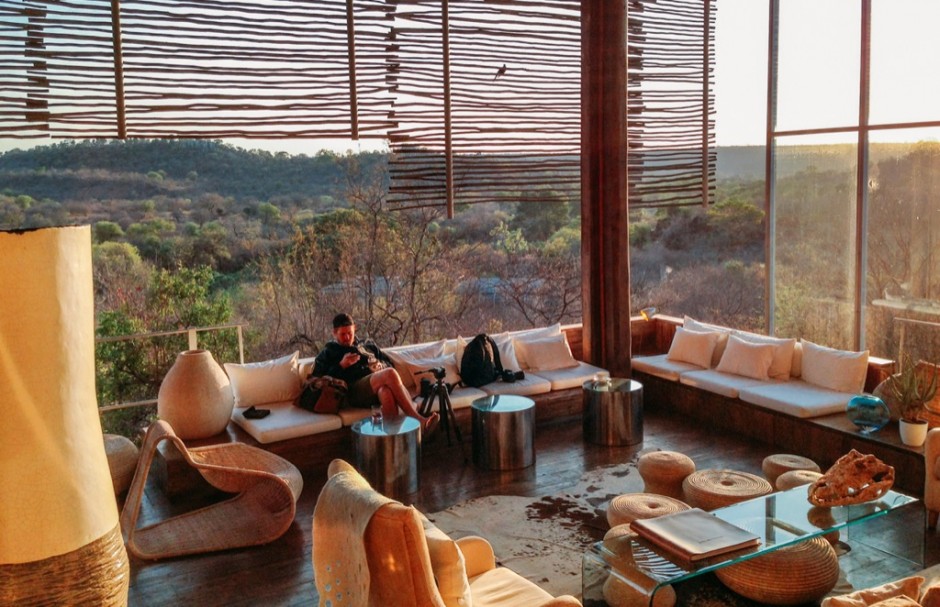 This is where you'll start every morning at Singita Lebombo. 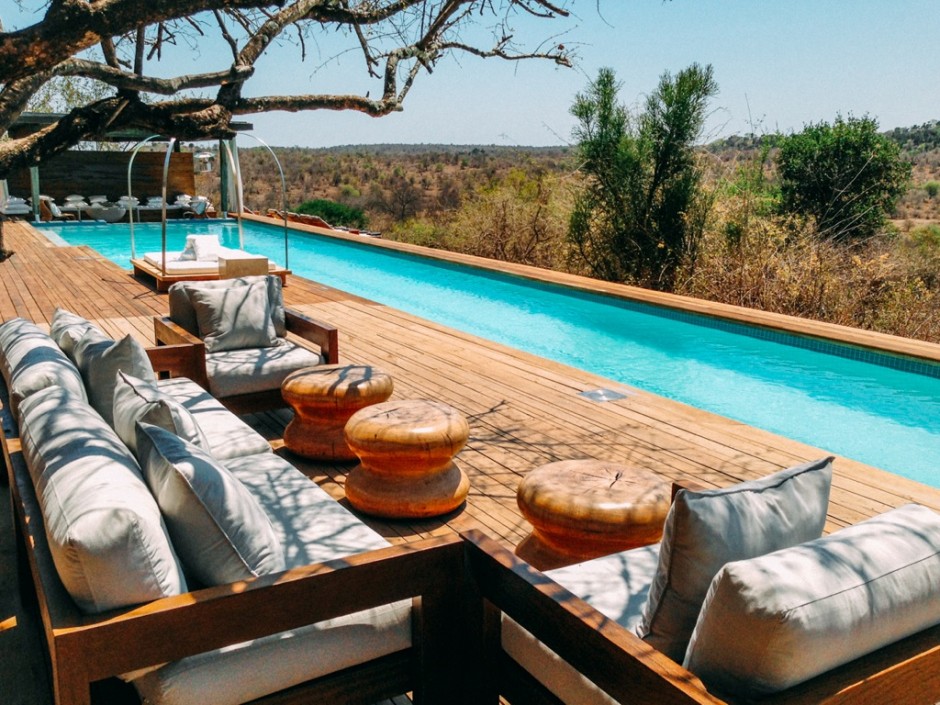 Between each game drive you'll be treated to an amazing lunch, and if you get too hot by the pool you can read a book in the shade or take a dip. 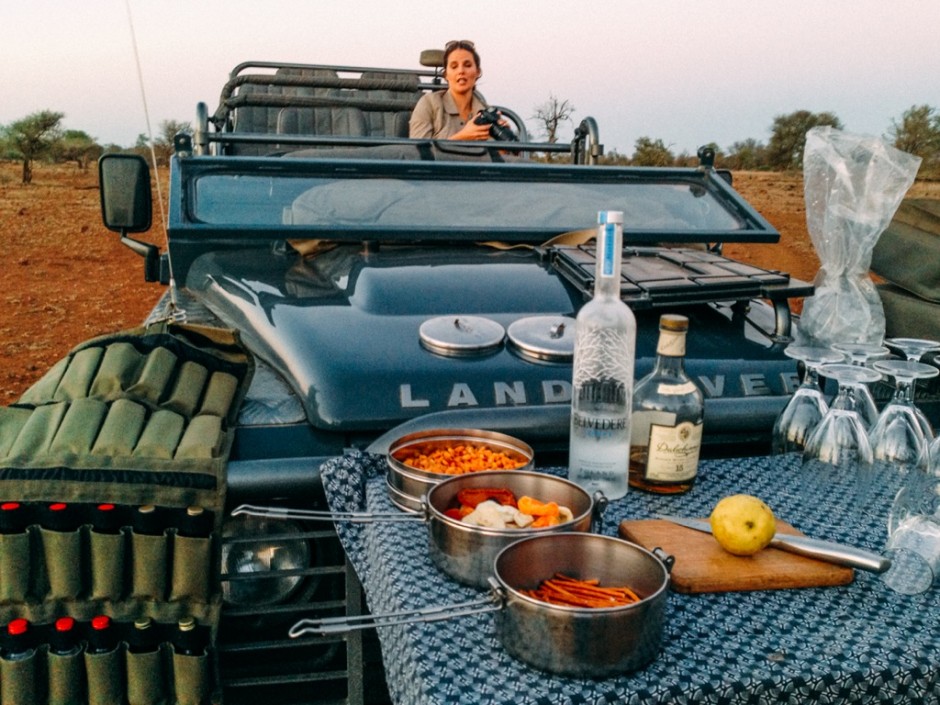 And just when you thought the luxury service couldn't get any better, your guide and tracker will stop the vehicle during each evening game drive and set up a cocktail bar right there in the middle of the bush. Snacks and cocktails surrounded by wildlife...magic.

Left, we have the magnificent male kudu with his large spiral horns. The kudu is one of the biggest antelope in Africa. Right, a leopard leads us back to her kill, which she's dragged into the brush so as not to attract attention from opportunistic hyenas or lions who'd try to steal it. 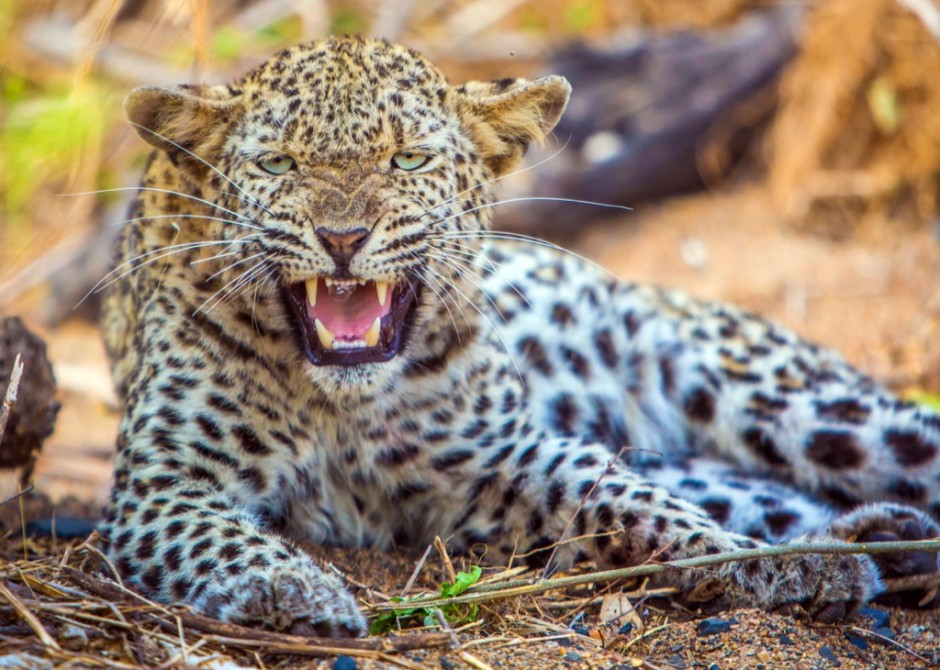 Protective over her kill

Typically, big cats act as though they're oblivious to your presence in the vehicle, but not the case when they're guarding a fresh kill. As we drew near to this small but aggressive female leopard, she let us know we were getting too close. 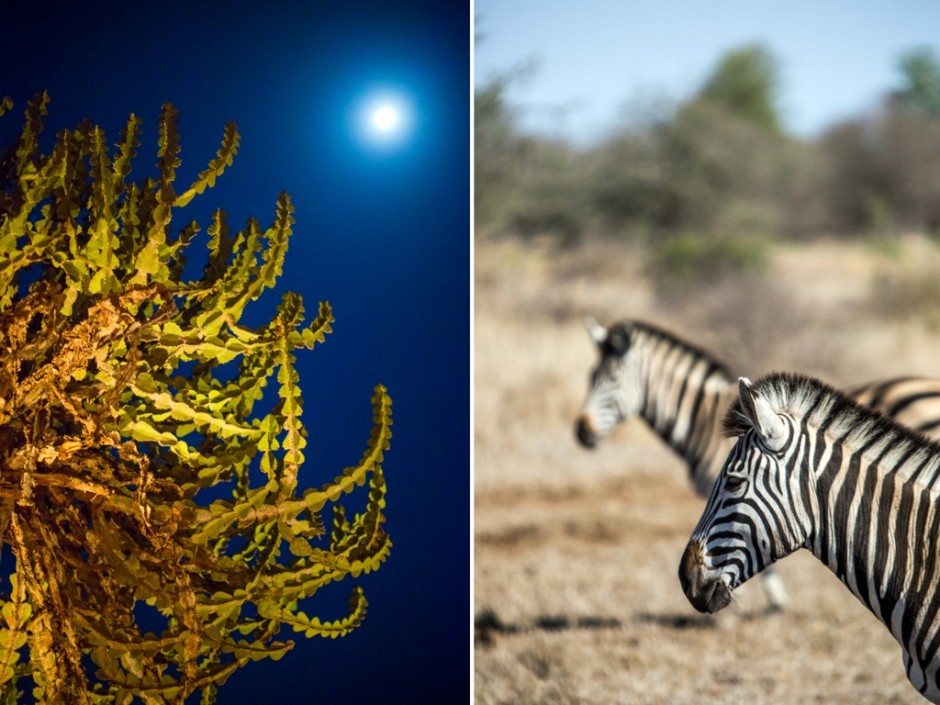 Not a friendly cactus

The euphorbia cactus grows all over this arid region of Kruger and is super poisonous to humans. 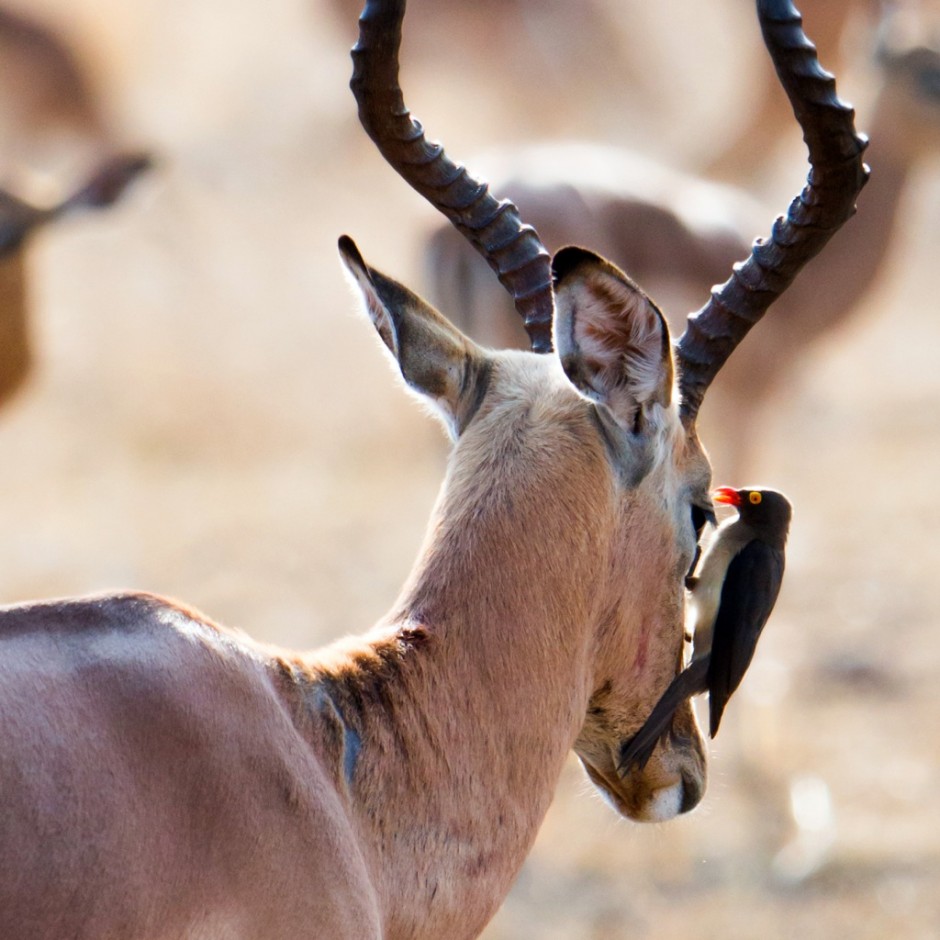 This small bird lives off the parasites it finds living on large mammals, from rhino to Cape buffalo to small antelope like this impala. The host animal understands the service the bird is providing and is amazingly patient with it, even when the bird's standing on its face. 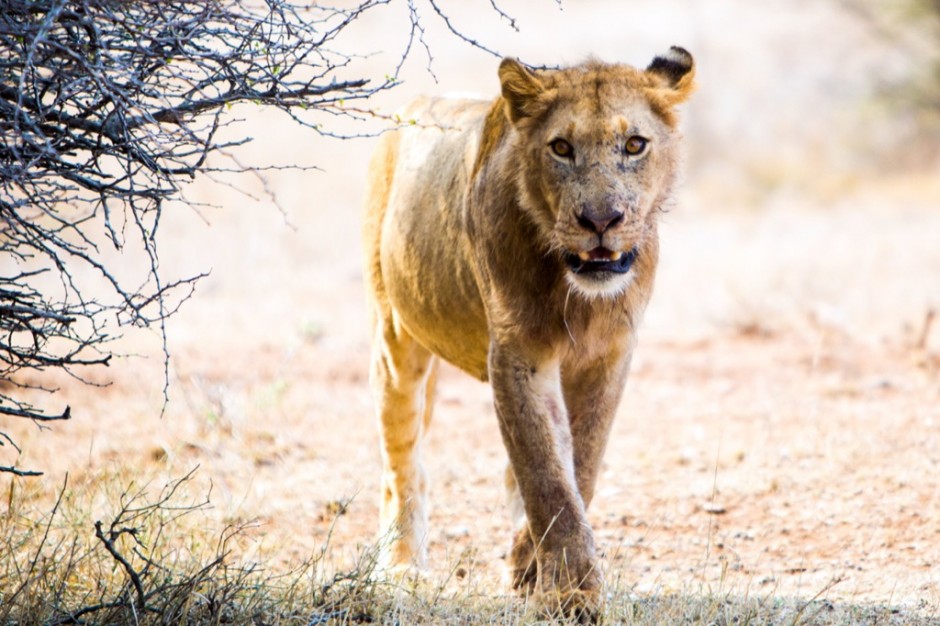 This young male lion faces a hard couple years fending for himself outside any major pride until he gets mature enough to attempt to overthrow a dominant male. 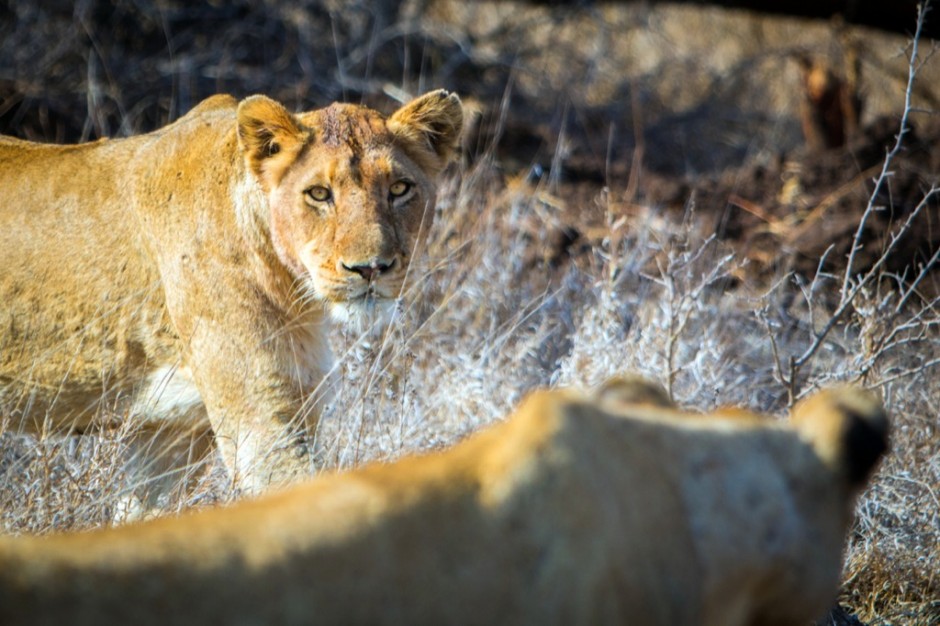 Lionesses share responsibilities in the pride, from taking care of the cubs to hunting game for the pride to eat. Most females specialize in one of the two roles. 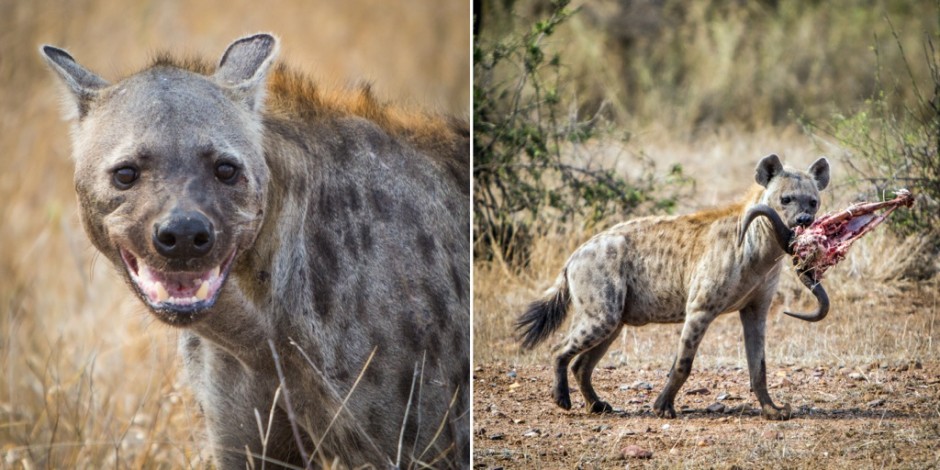 We drove up on a group of hyenas tearing up the final scraps of a wildebeest killed by a group of lions during the night. Hyenas have the strongest jaws of any mammal (even stronger than lions) and are ultimate survivalists. They also live in a matriarchal society where the lowest-ranking female is more powerful than the highest-ranking male.

Just down the road from the Singita Lebombo lodge, you'll find another amazing property called Sweni. This lodge is literally on the river, whereas Lebombo is higher on the ridge. It comes with an attached spa (treatments are available to guests from both properties) and an amazing little art gallery where most things are for sale. 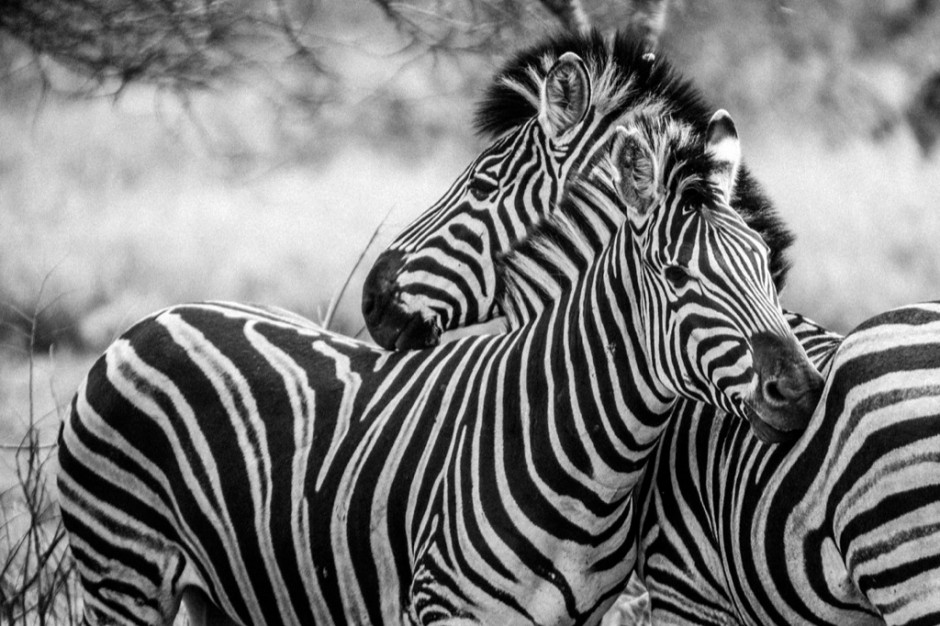 Part of a dazzle

Did you know a large group of zebras is called a "dazzle"?

In the pitch dark of night on our way home from a late game drive, we came upon two of the three mature males currently challenging the dominant male from one of the local prides. They looked big, strong, and healthy and had already recruited a couple females from the pride.

The days at Sweni begin much like those at Lebombo: a light breakfast and tea/coffee overlooking a spectacular view. 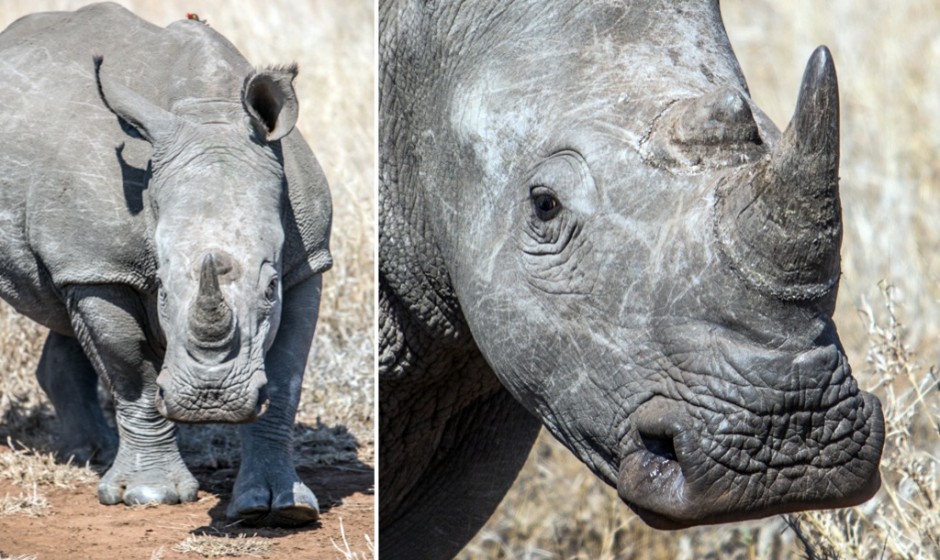 Under constant threat from poachers, black and white rhinos in Kruger are well protected with heavy round-the-clock security. 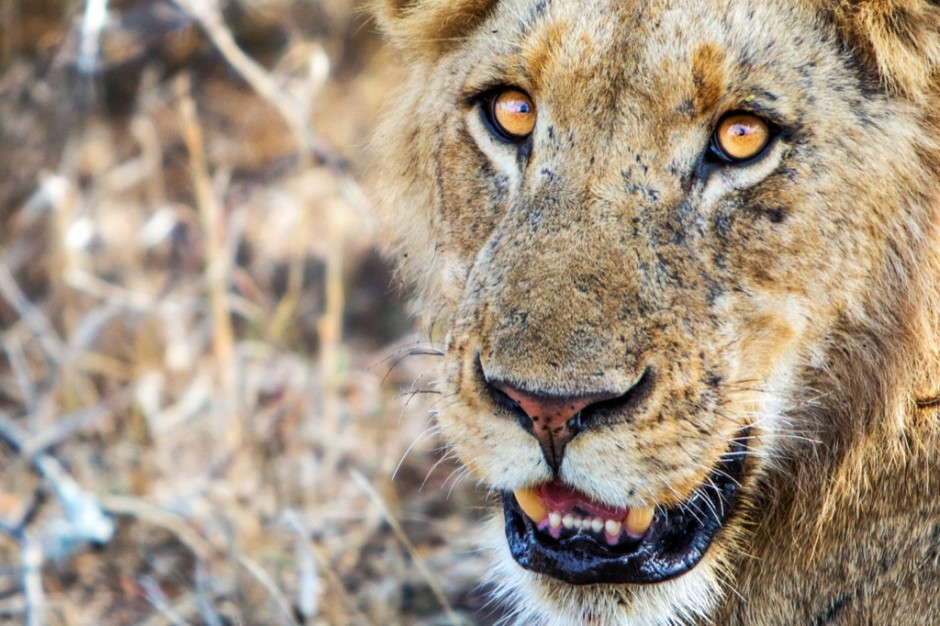 Making eye contact with one of the young, hungry-looking male lions only a few feet away from your open-top vehicle can be quite a moment. 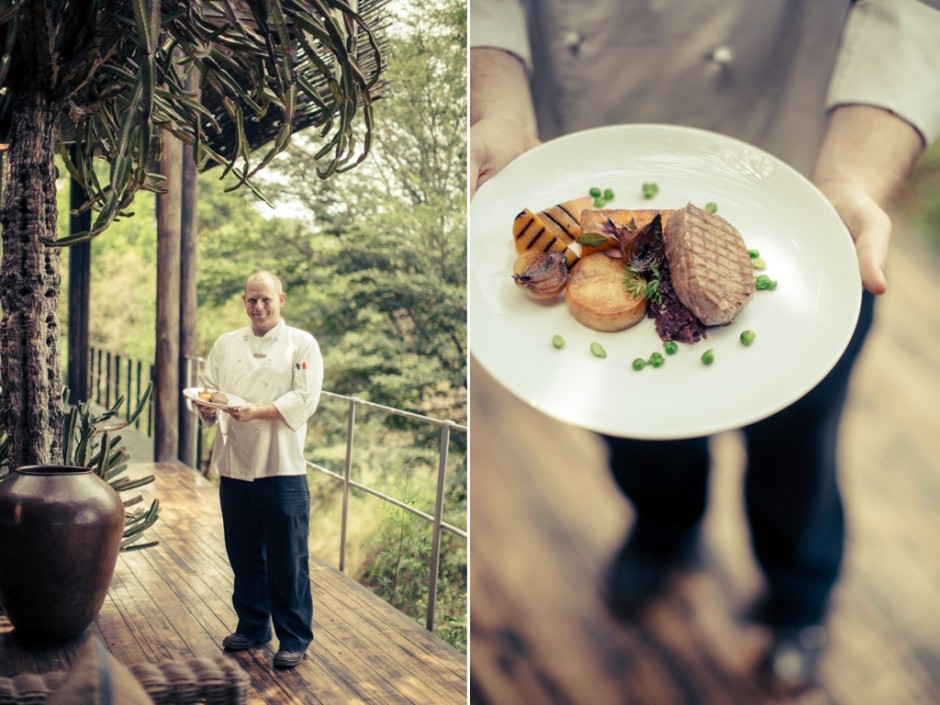 From tea to lunch to dinner to snacks, the culinary experience will blow your mind at Singita. 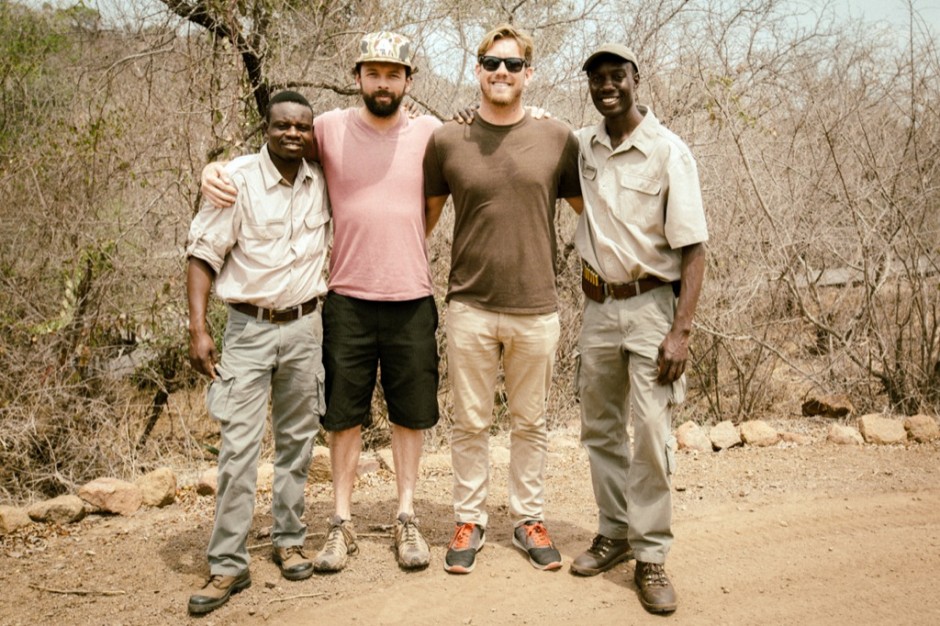 Thanks to everyone at Singita Lebombo and Sweni, especially our amazing guide, Enos, and tracker, Sunday.

Matador visited the Lebombo and Sweni lodges as guests of our friends at Singita.

What did you think of this article?
Meh
Good
Awesome
Bookmark
Posted In
Luxury Travel
Destinations
South Africa

These South African chefs are changing the global fine-dining landscape

Everything to know about cannabis in South Africa