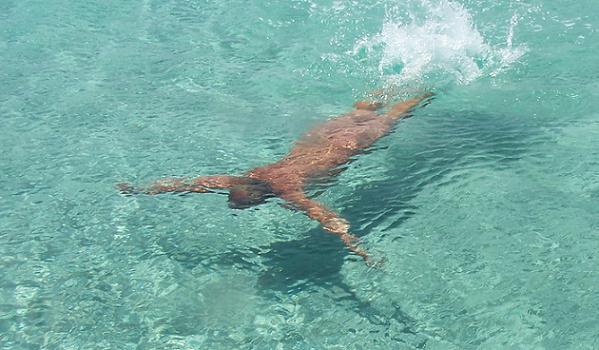 It’s a big world out there, with plenty of private little nooks and crannies for getting naked in nature, as God originally intended.

IF YOU WANT TO be sure you’re not hassled, here are 10 popular beaches where bathing attire – actually, any attire at all – is optional.

And if you like what you see here, make sure to check out Best Nude Beaches in the World, Vol. 2.

What good is a Garden of Eden type Paradise if you can’t enjoy it Adam and Eve style? Fortunately, the authorities in charge of Makena State Park, on the island of Maui, understand that – and the locals appreciate the tourism dollars naturist travelers bring.

The setting of Wreck Beach, Canada’s first and largest legal clothing-optional beach, couldn’t be more different from the tropics – but it is no less stunning.

Located at the confluence of the Frasier River with the Straits of Georgia and English Bay, this 5-mile long beach draws more than 500,000 visitors annually to admire the surrounding white cliffs and emerald-green forest. As befits one of the largest nude beaches in the world, it enjoys the allegiance of the Wreck Beach Preservation Society. www.wreckbeach.org/ 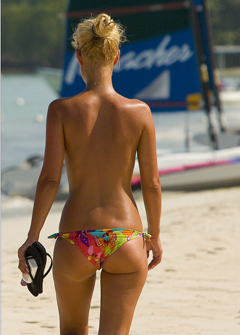 Yet another enclave defended by an active “Friends of” organization is the two-mile stretch of beach at the southern end of San Onofre State Park in the sun-drenched OC. A judge just ruled that the clothing optional section of the beach could stay that way, so come down and help the naturist enthusiasts celebrate their 30-year tradition.

Cap d’Agde is much more than just a nude beach: it is the “World Capital of Nudism.” In the “naturist quarter” of this Mediterranean resort town, nudity is legal not only on the beach but also in banks, restaurants and shops.

Of course, France is the home of laissez-faire, so just about every beach in southern France is topless. While the clothing optional atmosphere here is as wholesome as anywhere, there are sections of the beach at night where friskier activities are reported to take place. www.capdagde.com

This lovely beach in metropolitan Miami has been featured as one of the Travel Channel’s “Top Beaches” – and 1,000,000 visitors a year give it its reputations as one of the most popular clothing optional beaches in the country.

Haulover was once a very unsavory place, until it was reclaimed from drug dealers by naturist activists; to make sure it stays family-friendly, the city of Miami maintains the amenities, including patrolling lifeguards, barbecue grills, refreshment stands and showers. If you get bored just soaking up rays, there are volleyball games and even occasional surfing contests.

Next Page
Tagged
Trip Planning
What did you think of this story?
Meh
Good
Awesome