Living in Southern California, there are not many days that I complain about the weather. It’s warm and sunny for about 337 days of the year. But at a certain time of the year, every year, the same thing happens to me: I get the fall foliage blues. Quietly, I simmer in envy as everywhere I look people are posting pictures of trees turned red, and TV advertisements show kids jumping into mountains of fallen leaves. All I can see out of my window is another damn palm frond.

Two years ago, I’d had enough of the monotony and decided to take matters into my own hands. I joined the masses of “leaf peepers” and “foliage hunters” who drive the back roads of New England each autumn in search of the majestic red and orange hues that blanket the East Coast of North America every year. Then, this past fall, I wanted to take a road less traveled but equally as beautiful, and that quest led me to New Brunswick, Canada. The province lies adjacent to Maine, as if it’s sitting on New England’s shoulders, and has just as many maple trees as any of those more popular (and congested) foliage routes.

The photos below are the culmination of my week-long road trip through this beautiful region at a special time of the year: New Brunswick in the fall. 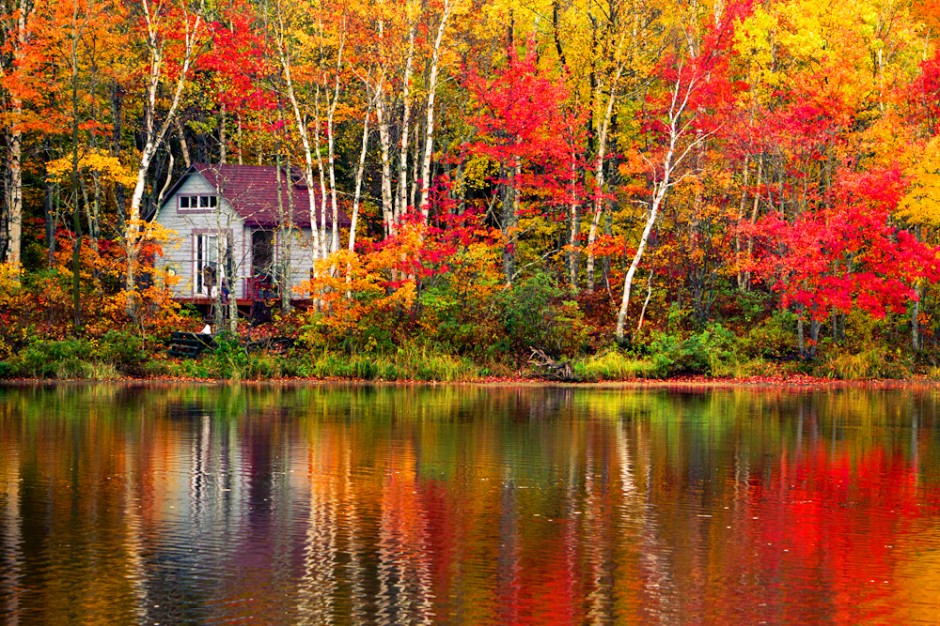 This is it…this is what I came to see. While I was driving along a back road near the small town of Tracadie-Sheila on the northeastern coast of New Brunswick, I came across this little cottage tucked behind the most insane fall foliage I had ever seen. 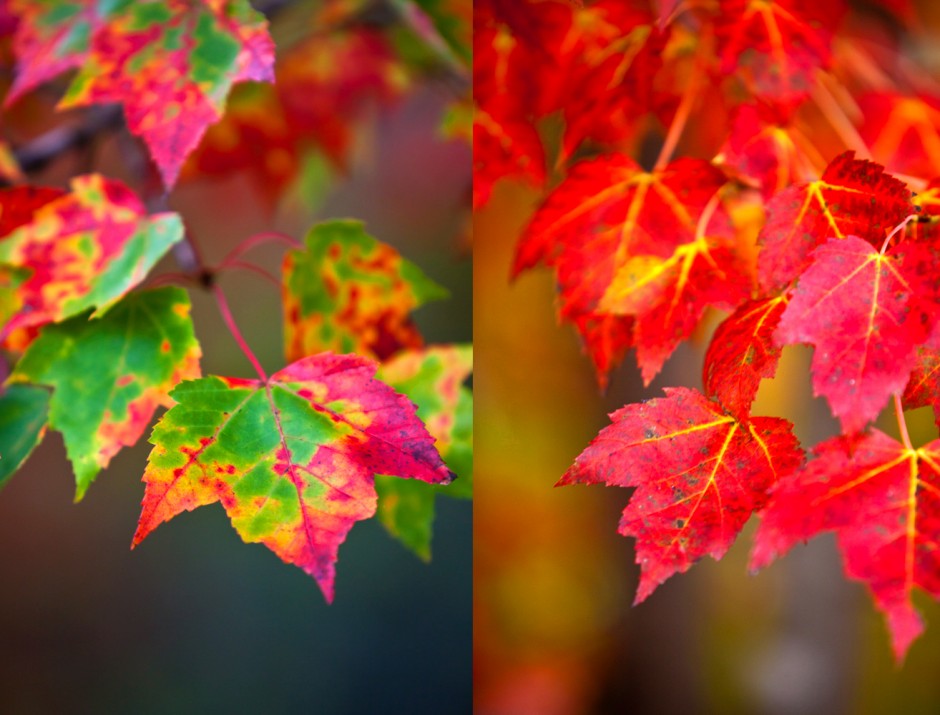 The process of the leaves changing colors can literally happen over night. 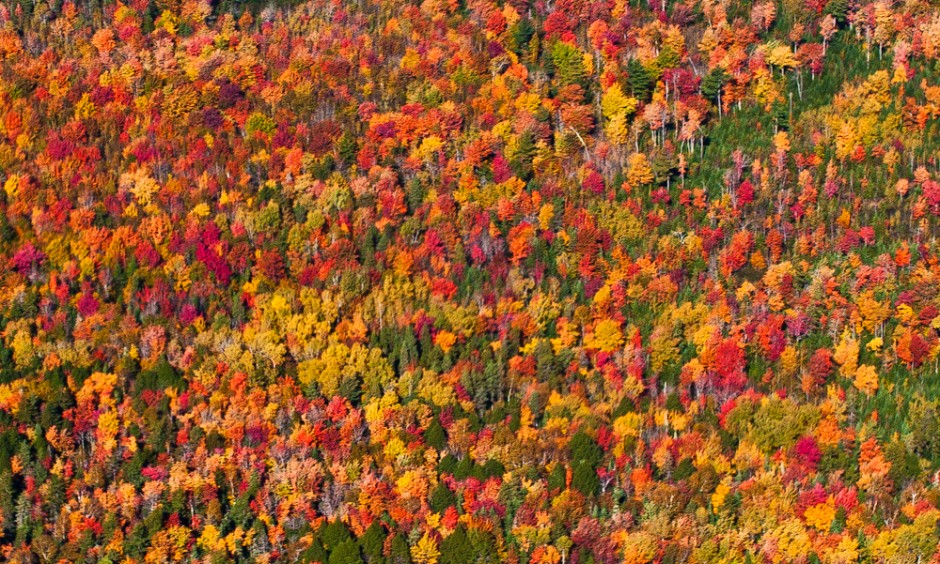 A blend of elements

As I was flying in, I couldn't tell if the landscape outside of the window was trees or a bowl of Fruity Pebbles. 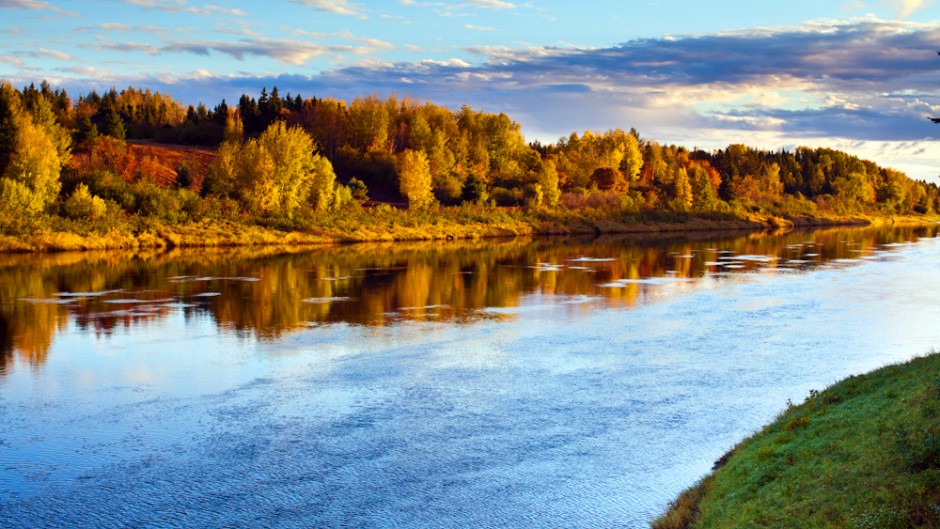 The mighty Miramichi River just after the start of a new day. The river is also known for some of the world's finest salmon fly-fishing.

I eventually tried my hand at fly-fishing for the first time...I was a little shaky to say the least, and even though I started to get the hang of things towards the end, my efforts were not as successful as this angler's. 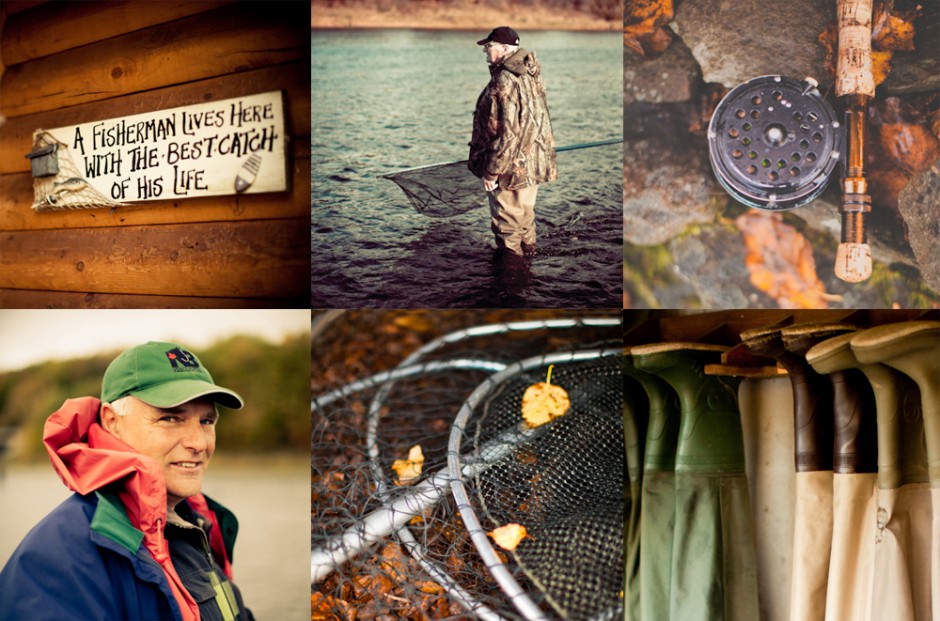 Fly-fishing on the Miramichi definitely inhabits a culture of its own. 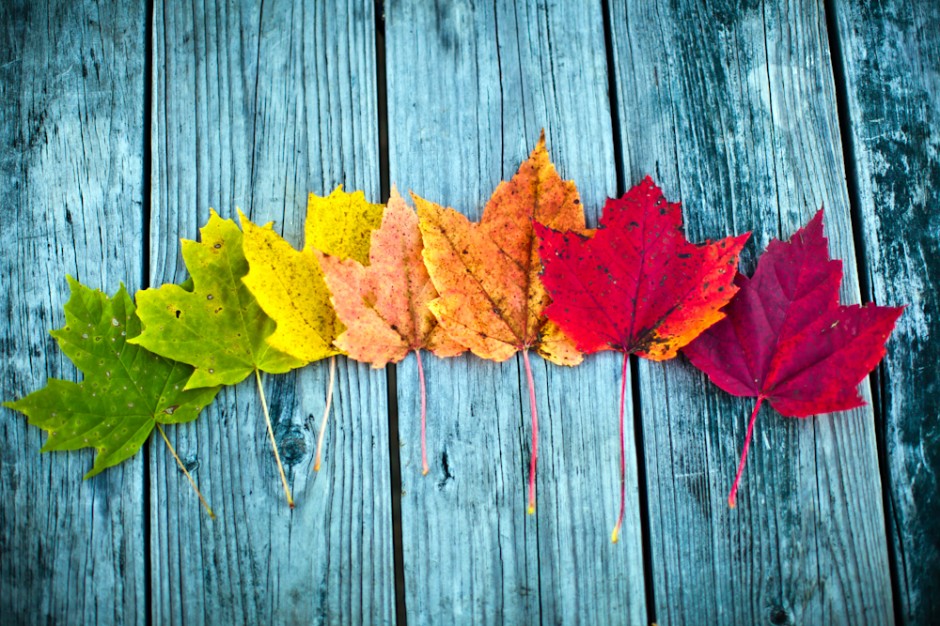 The complete spectrum of Canadian foliage 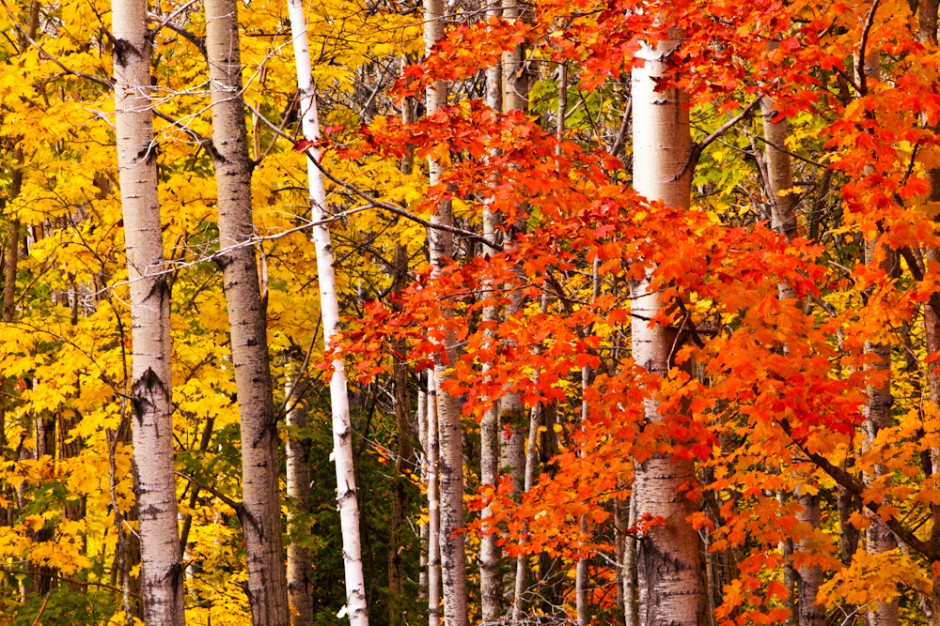 A daily scene in New Brunswick in autumn 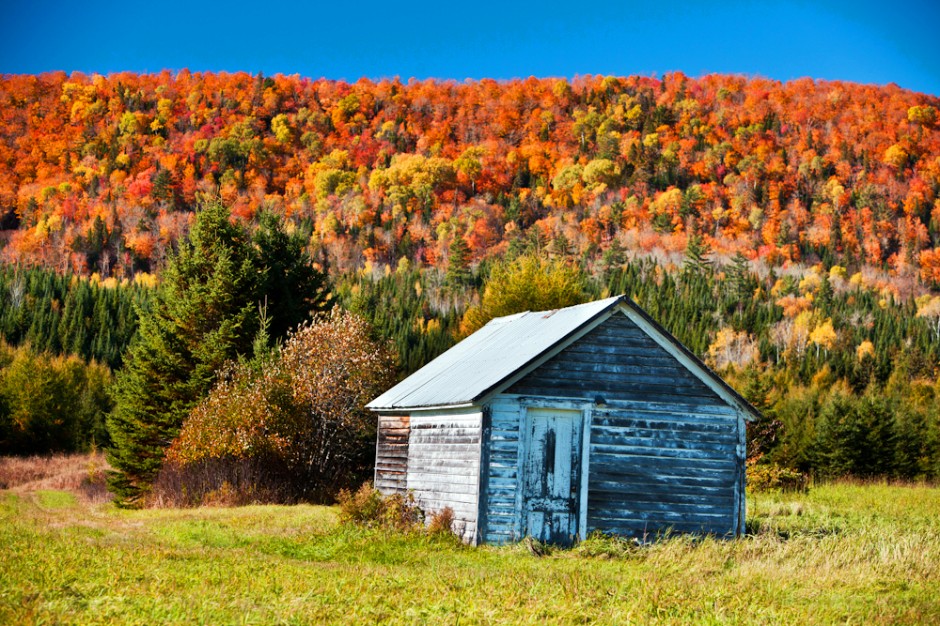 I came across this shack in the small town of Riley Brook driving north towards Campbellton Park -- not a bad spot for a little break. 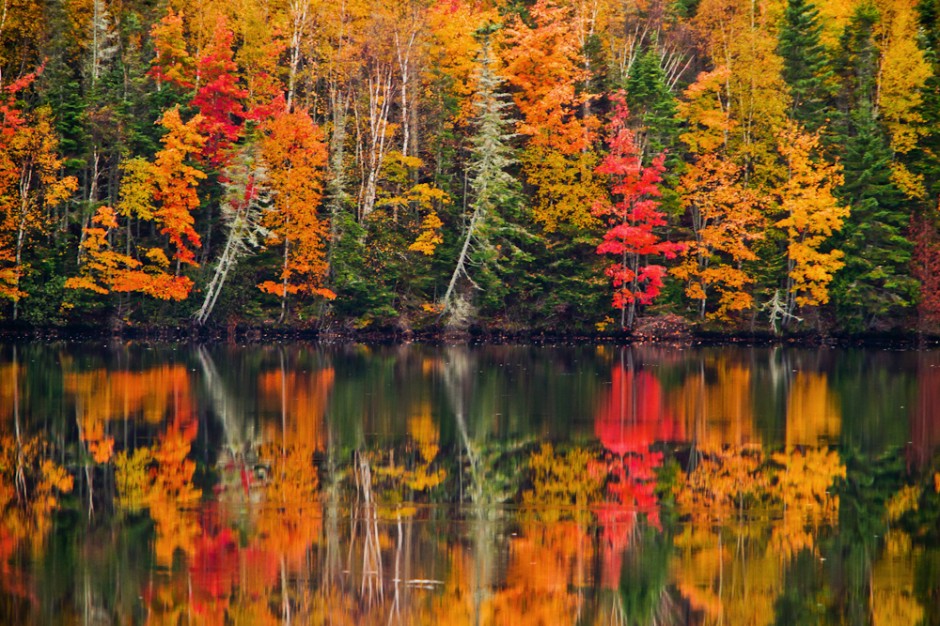 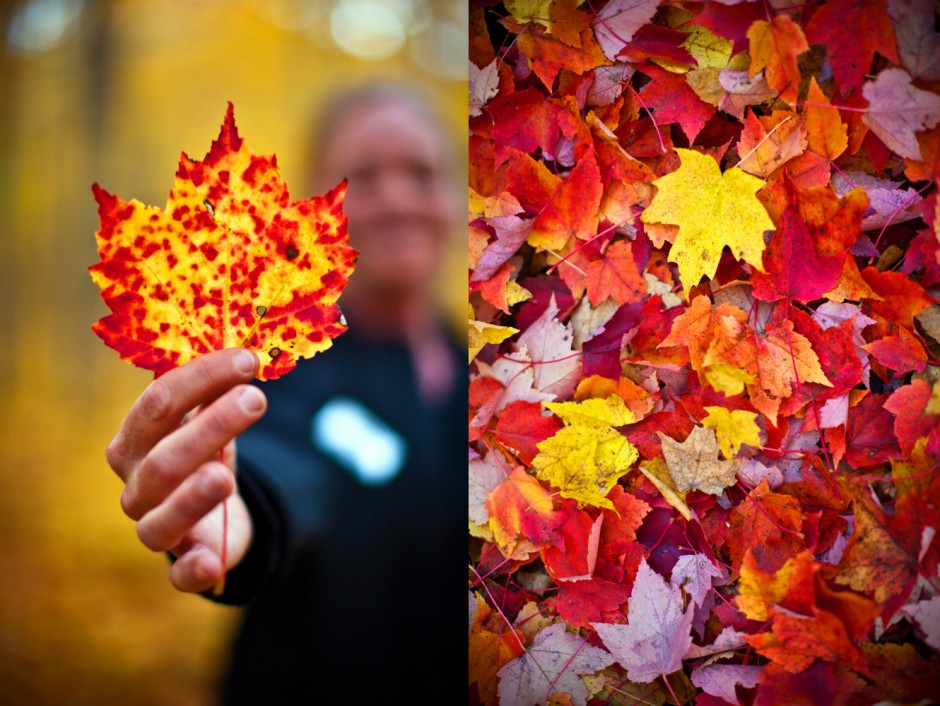 The variation of colors in the leaves is insane -- some of them had a fall camouflage print going on.

Some of the fields I drove past looked like their trees were little bursts of fireworks. Birdhouses seemed as if they were swimming in a sea of red. 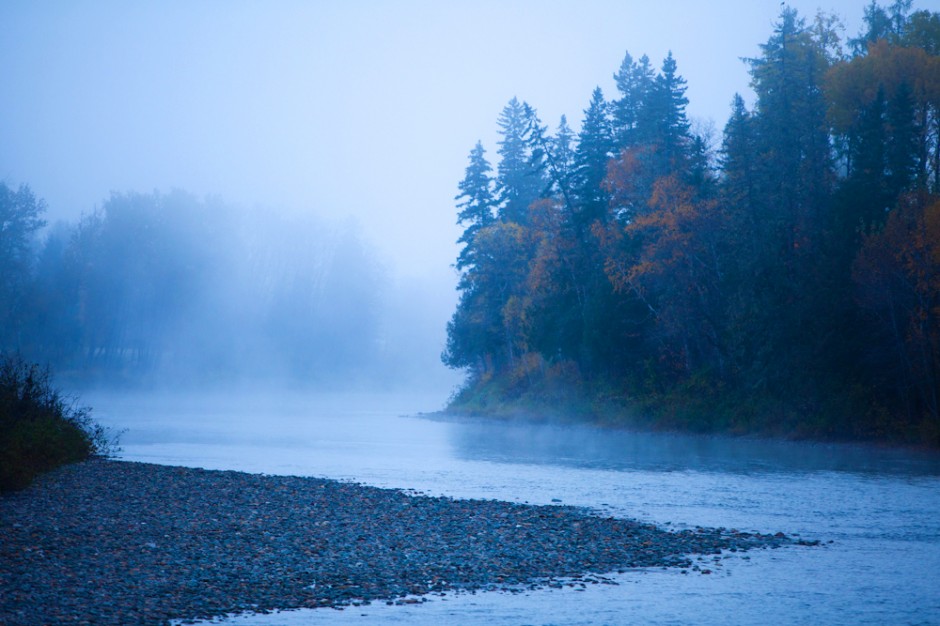 The season can come and go very fast in New Brunswick. A bad freeze can kill a lot of the color, and within a day of a very cold night, colors disappear as leaves begin to fall. 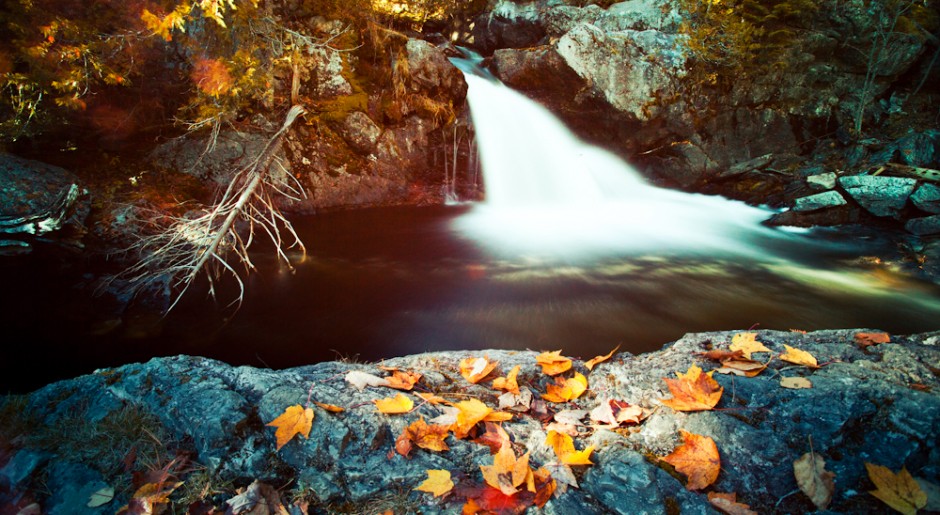 I lucked out -- on my very last morning on my way to the airport, I pulled up behind a line of traffic and thought to myself how strange it was for there to be traffic on a Sunday morning…until I realized people had stopped in the middle of the road to let a moose cross. 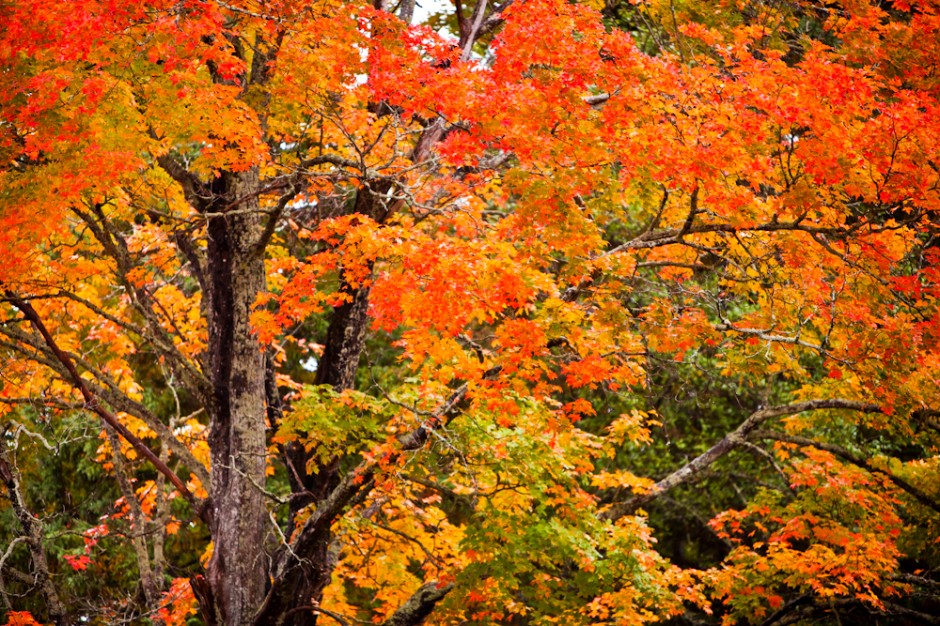 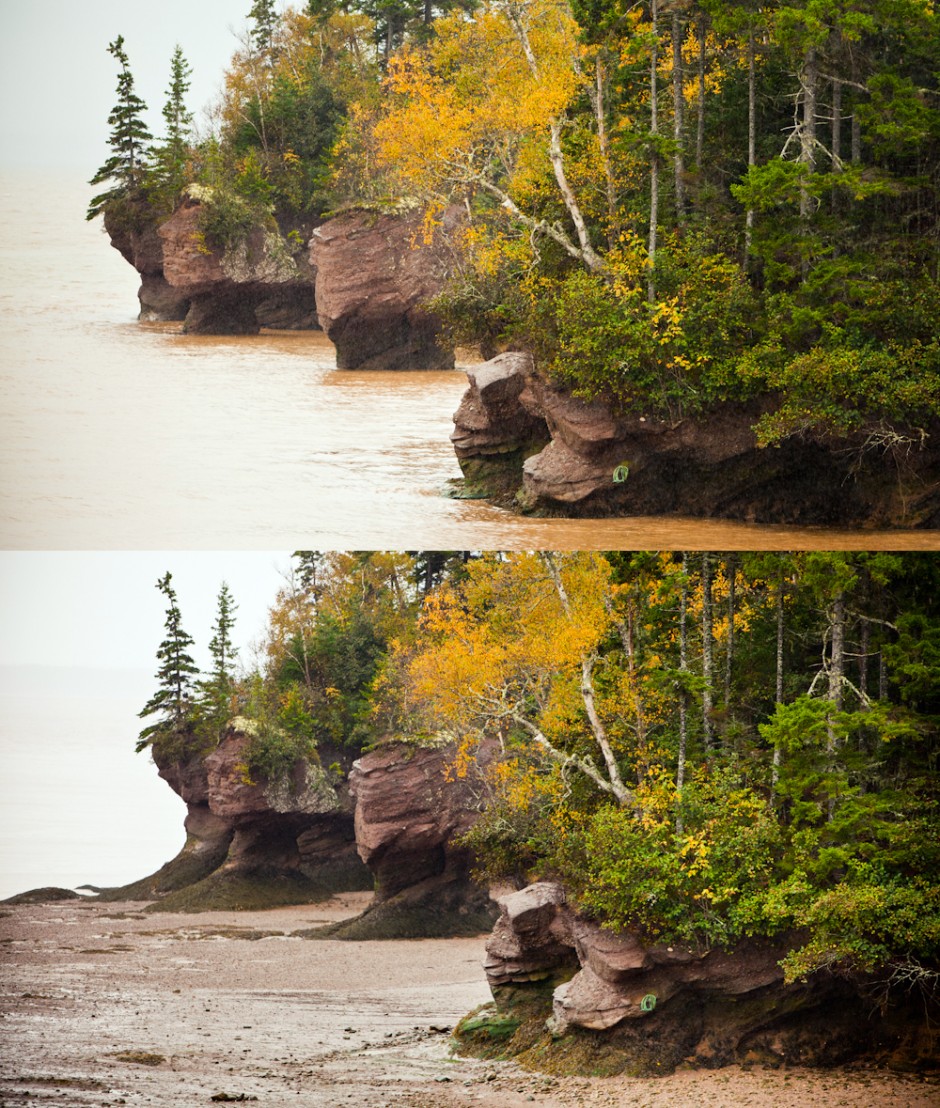 With some of the highest tidal ranges in the world, Hopewell Rocks can see the tide shift between 32 and 46 feet in only 6 hours. 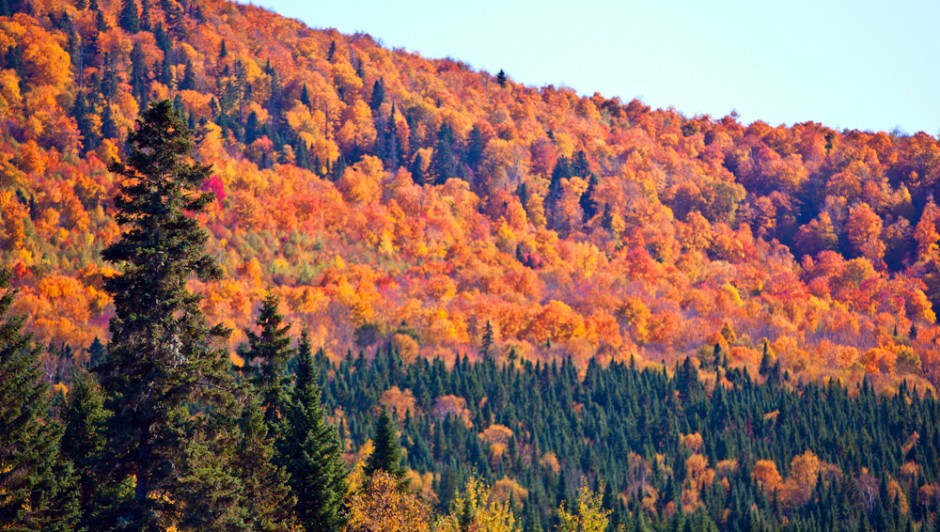 A fall scene in the hills of New Brunswick 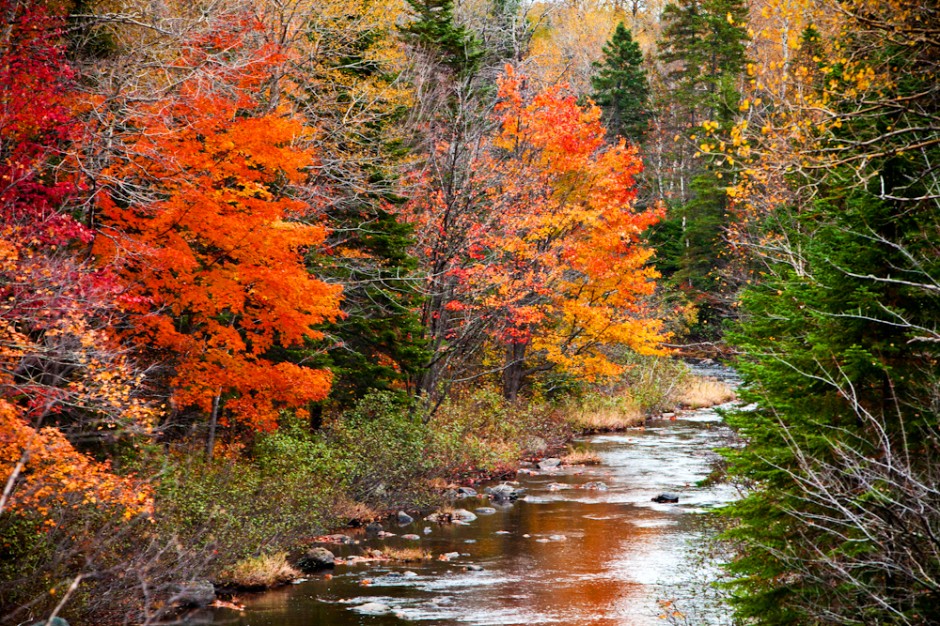 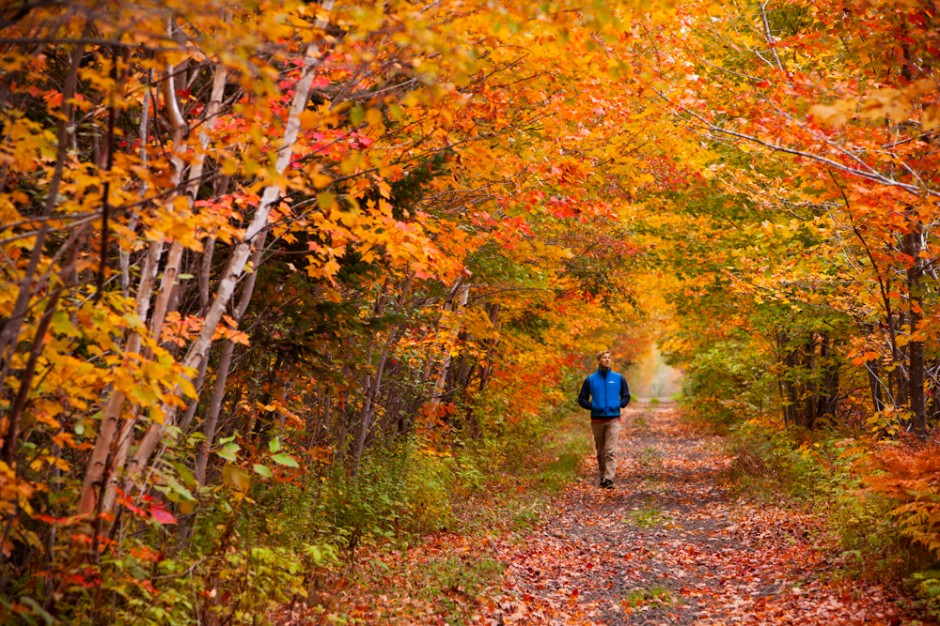 A little self portrait. While driving past the town of Caraquet I saw a tiny turnoff with some beautiful leaves falling off the trees. I thought to myself, "Hmm, I should check that out," and the next thing I knew I was driving down the most majestic road I've ever seen. 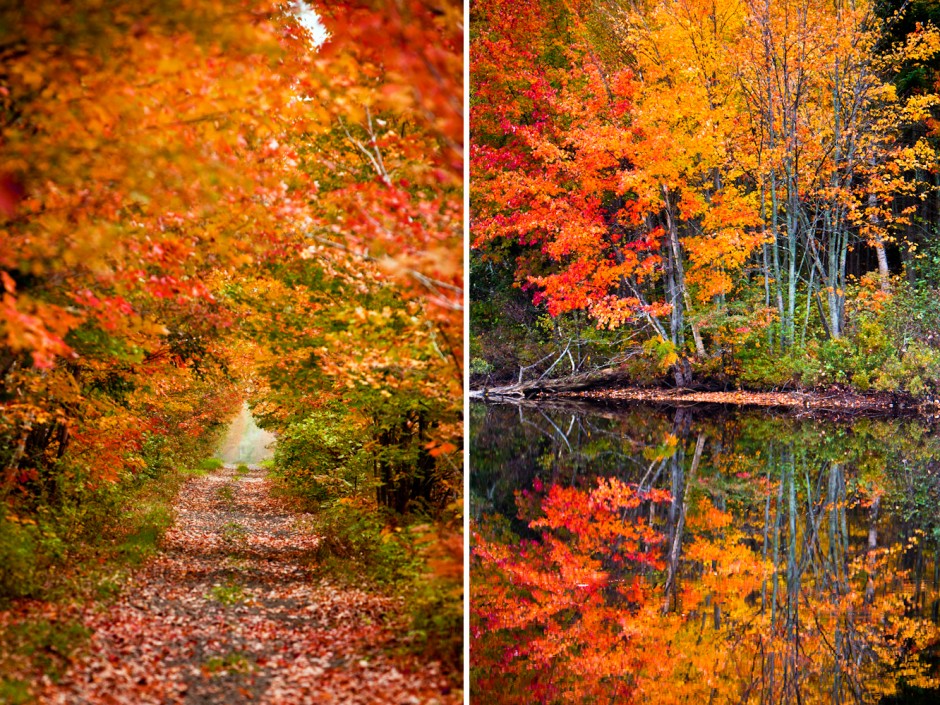 Care to take a stroll? 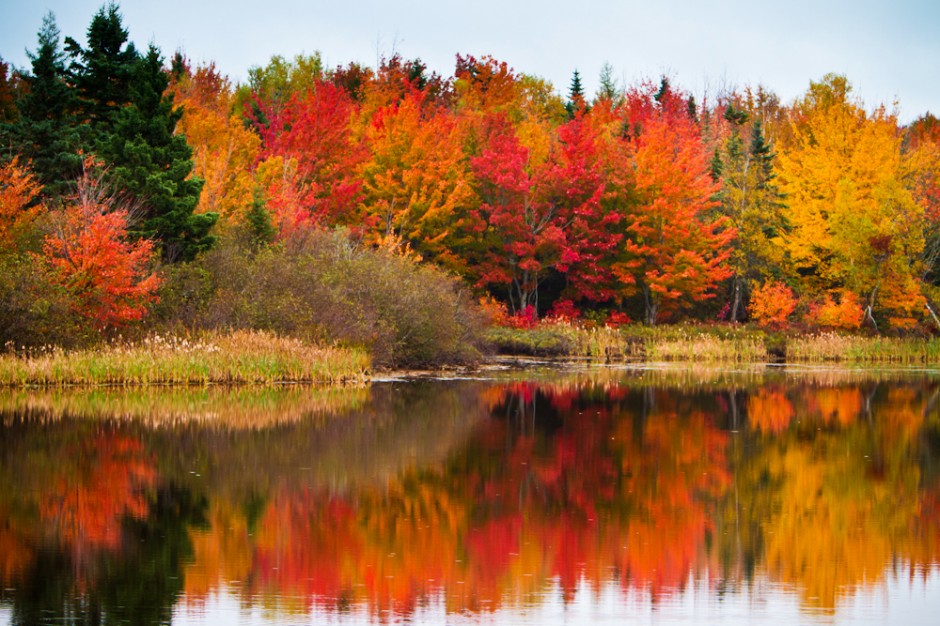 I couldn't get enough of the maple trees and the reflections they provided. 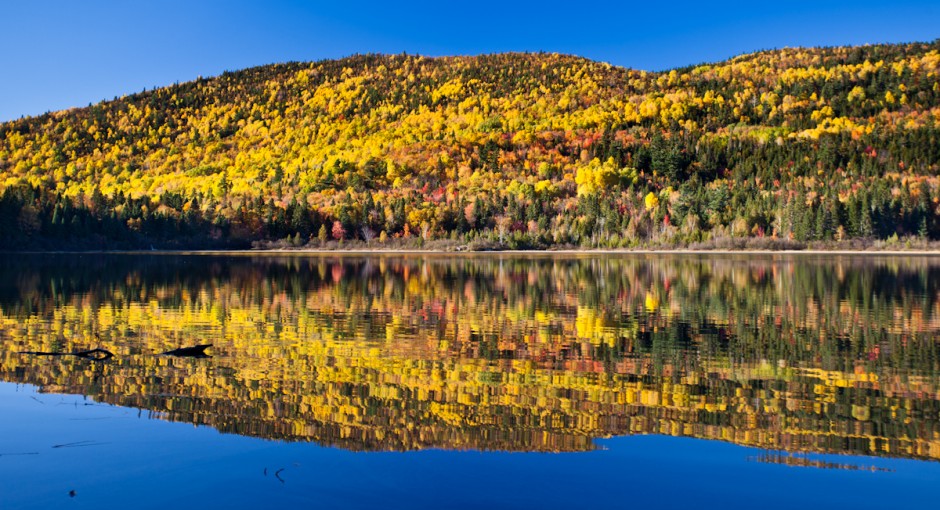 I was told by the rangers at Mount Carleton Provincial Park that I should have been there a few days earlier, because the wind had just blown all the red leaves off, but I didn't mind too much -- the sight was still hard to beat.

This post is proudly produced in partnership with Destination Canada.
Tagged
Travel Trip Planning New Brunswick, Canada
What did you think of this story?
Meh
Good
Awesome
✖
travelstoke
Download the mobile app
stoked by