Escape to the most laid-back island in the Caribbean Sea.

MY BOYFRIEND AND I were walking too fast our first day on Caye Caulker.

“What de hurry, man?” teased a dark-skinned, dreadlocked youth, grinning from the shade of a dive shop. “On de Caulker, you go slow.”

It wasn’t just a suggestion, as we soon learned: “Go Slow” is the formal motto of the island. With the aid of swaying hammocks, cheap rum, and the sparkling green-blue waters of the Caribbean Sea, it’s not hard to see why. 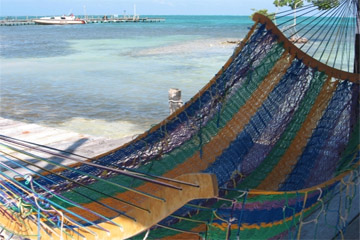 Geographically, Belize and its islands belong to Central America, but Belizean people, music, and food are more closely aligned with the Caribbean than with neighboring Mexico or Guatemala.

English and Creole are the two lingua francas, and Belizean people claim a mixture of cultures as diverse as Mestizo, Maya, Creole, Garifuna, and Mennonite.

In Belize, Caye Caulker is second only to resort-y Ambergris Caye in terms of tourism, but it has retained a small-island vibe that’s second to none in terms of charm.

Except during the Christmas and Easter holidays, crowds are so minimal that it’s not uncommon to be the only guest at your hotel for days at a time.

The town is intimate enough that you’ll soon be on familiar terms with the waitress at your favorite breakfast haunt, and it’s developed enough to support Internet cafes and WiFi hotspots.

The island’s blissfully car-free streets are quiet except for the occasional hum of a golf cart, the leisurely rattle of a bicycle, the faint tune of a Bob Marley track, or the yap-yap of tiny dogs (the Chihuahua-to-person ratio here is off the charts).

Houses are splashed in brash tropical hues, electric yellows and blues and pinks; iguanas sun themselves along the roadsides and pelicans hover overhead. 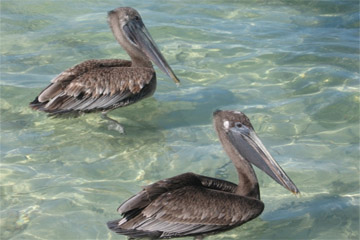 Though it’s entirely possible to go so slow that you cease moving altogether except to rouse yourself for BBQ and booze, some of Caye Caulker’s best features do require a little motivation on your part—and they’re well worth it.

If you get bored here, it’s nobody’s fault but your own.

For adventure junkies, kite-boarding and wind-surfing lessons happen just offshore, and you can get your PADI open water certification for as little as $250 (one of the cheapest programs in the world).

Kayaks and fishing poles are available for rent, or you can organize a deep-sea fishing tour with any number of local operators. For nature-lovers, Swallow Caye hosts dozens of native birds, and Caulker conservation celebrity “Chocolate” Heredia runs highly recommended tours to see endangered manatees in nearby mangrove swamps.

The most popular trips include visits to Hol Chan Marine Reserve off Ambergris Caye (presenting up-close-and-personal encounters with sea turtles, Green Moray Eels, Spotted Eagle Rays and more), and Shark-Ray Alley, where you can swim with Nurse Sharks and giant stingrays.

They also offer three-day sailing adventures from Caye Caulker to Placencia in Southern Belize, during which passengers make camp on uninhabited islands and get the chance to swim in pristine Caribbean waters.

If you’re only interested in white sandy beaches (and the inevitable spring break crowd), look elsewhere; while there are a few scattered swimming areas, most of the shoreline around the town is outfitted with rickety wooden piers to accommodate the many fishing and sailing boats. 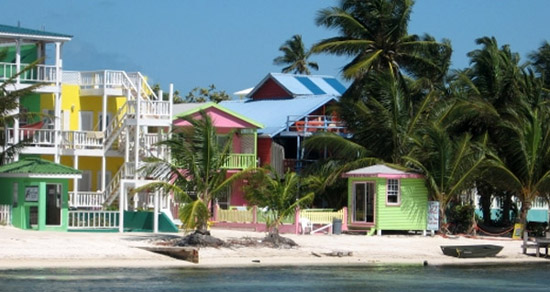 Meals will be your biggest expense on Caye Caulker, but if you’re willing to splurge, you can get heaping plates of freshly grilled seafood with veggies and other tasty side dishes along the beachfront (up to $10 per person).

Cheaper options include the Sandbox for burgers ($3.50) and Syd’s for Mexican fare ($2 burritos). A must for the budget-conscious, Glenda’s Bakery and Cafe serves delicious cinnamon rolls (25 cents) and scrumptious burritos ($1.50) out of a cozy blue house away from the main drag. 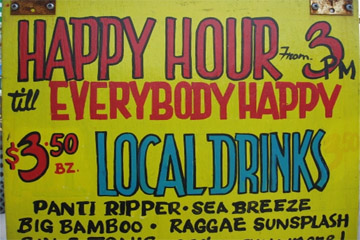 The Lazy Lizard—right on the Split, where you can drink a beer while dipping your toes in the water—boasts sweet sunset views and great people-watching.

The cheapest mixed drinks, including the infamous Panty Ripper (pineapple juice and coconut rum), are made with Belizean rum and go half-price ($1.50) during happy hour.

Having conducted a thorough survey of Pina Coladas all over the island, I can confidently say that the Sandbox owns the number one spot; other good bets are Happy Lobster, Agave, and I-I.

The latter is also the best-known nightclub on the island, with three stories of solid reggae beats and a breezy rooftop with swings and hammocks; on a busy night, Oceanside Club can also give the ol’ I-I a run for its money.

There’s no shortage of clapboard hotels and beachside cabanas on Caye Caulker, though some options are far better than others.

Private cabanas on stilts ($15-25) offer respite from irksome sandflies, and be sure to check a few different rooms in each hotel, as windowless closet-sized holes sometimes cost the same as the ones with a view.

When a short visit turns into a week, and a week turns into months (as it did for me and my boyfriend), furnished apartments are widely available—just ask around.

Despite countless vows that you’re “leaving tomorrow,” there will actually come a day when it becomes necessary to rejoin the world beyond the Caye.

Ferries ($15 one way, 45 minutes long) run every few hours between Belize City and Caye Caulker, and from Caulker it’s not far to San Pedro on Ambergris Caye.

There’s an airstrip south of the main drag, but flights are pricey; you’re better off flying or busing in and out of Belize City and coming by boat.

I’m also happy to give advice or meet up if any travelers are headed this way—I’m living on Caye Caulker through June 2008, so send me a message through Matador and I’ll hook you up.

Tagged
Insider Guides Belize
What did you think of this story?
Meh
Good
Awesome