WE HAD BEEN BEATEN by the Darien Gap once before. The roadless and lawless zone that comprises the southern Isthmus of Panama and the northwest corner of Colombia had left us with no choice but to let the dream of an Alaska to Chile road trip die and swear that we would return for revenge.

Truth be told, we were defeated as much by the endless cheap cervezas, buenas olas, and beautiful chicas that made us stay for months longer than planned in Central America, as we were by the Darien Gap itself.

There is certainly a way to ship your car across, but this costs a serious amount of money and you better bring A-game negotiating skills and plenty of pesos if you hope to get it out of Colombian customs.

We tried to charge it, not believing those who warned us, and found out the hard way that you need a team of Land Rovers and a cadre of local guides if you expect to just drive through the maze of dirt roads and here-today, gone-tomorrow bridges. Not to mention negotiating the very liquid situation of land controlled by varied groups of guerillas, drug smugglers, and indigenous tribes that don’t always take kindly to interloping gringos. Long story short, we limped north out of Panama licking the wounds of a blown rear differential and an experience that took me as close as I ever want to get to the shady world of narcotraficantes…but that’s another story. Darien Gap 1, Doucette brothers 0.

Several years later we found ourselves on assignment in Cartagena, Colombia, with the goal of evening the score. This time we had wisely abandoned the automobile in favor of hitching a ride on a sailboat. 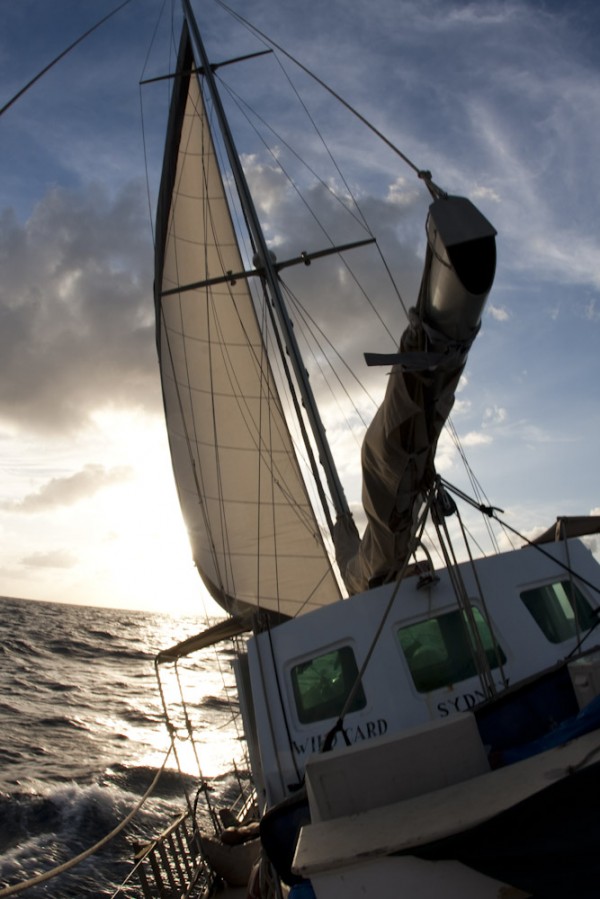 Enjoying the downwind run from Cartegeña

Taking a boat through the San Blas Islands has become an increasingly popular option for travelers looking to make the move from South to Central America or vice versa. For the same price of a one-way air ticket, you get a 5-day trip sailing a pristine Caribbean island chain populated by the indigenous culture of the Kuna. Perfect, right?

Almost. The route was once a favorite among the cocaine cowboys smuggling Colombia’s most famous export north, and although increasingly popular the trip is not without its risks. The open water crossing is notoriously hazardous and the San Blas archipelago is a minefield of reefs, which mandate an experienced captain and safe boat. The Wild West vibe reigns among boat captains competing for backpackers’ business, and there have been several cases of violence and even murder on the route.

Post up at the Club Nautico in Cartagena with a six-pack of Aguila and take your time in selecting a boat and a captain. Inspect the boat thoroughly, talk to the captain, and seek out the other potential crew members. Ask lots of questions about everything from the incoming weather to what’s on the menu. Agree on the price before departure. In our case, we facilitated this interrogation process by buying a bottle of whiskey and, under the guise of ‘sharing’ with captain and crew, found out everything we needed to know.

The more time you give yourself in port, the better your chances of finding the perfect scenario. The boats don’t follow any specific schedule, and you could end up waiting several days. You’re in luck, though, as Cartegeña is a city with plenty of diversions to keep you occupied.

Leave the contraband in Colombia.

The Colombian police are no joke and they prowl the harbor in confiscated black cigarette boats. Every backpacker boat is a potential smuggler and they will stop and search your boat. That gram that cost you 5 bucks the night before just isn’t worth bringing…

Seasickness is a bitch.

The section of the Caribbean you will be sailing through is well known for its strong currents and crossed up swells that toss boats like rubber duckies. Even if you’re not prone to motion or seasickness, a motion-sickness drug is still highly recommended. One of the guys on our trip who swore he never got sick passed on the pills and spent the first two nights soaking wet with his head through the railing. I used Bonine and it worked really well. A list of options can be found here.

When you make it to the San Blas, you will most likely be approached by a couple of Kunas in a dugout canoe hoping to sell you whatever it is they caught that morning. Buy it. Not only will you score an amazing seafood dinner, you will be supporting the villages and helping ensure friendly relations between the Kuna and the boats that ply their waters. This can be facilitated by making sure you bring some US$ in singles and fives and be generous in yout bargaining. DO remember that you are not supposed to bargain with alcohol as it is forbidden in most of the villages.

Cruising through the blue Caribbean water, feasting on lobster while enjoying ice cold Aguila and looking forward to the next snorkeling mission sure beats digging a truck out of quicksand and mud while worrying that every mosquito is carrying malaria. My brother and I raised our beers in the direction of the Darien Gap in salute of a worthy adversary, but this time it was us who were laughing.

Turns out we shouldn’t have been so hasty in our celebration. Three days later, having been battered by wind and rain, the boat snapped its mast, nearly flipping the 60ft craft in large seas. Later, we were unable to land in Portobelo due to a massive mudslide that had leveled the town. We motored into Colón only to spend 8 hours awash in the bureaucratic nightmare of customs at the entrance of the Panama Canal. That cagey old Darien Gap had its way with us once again. We had made it, but as for evening the score… The full story of our trip can be found here. 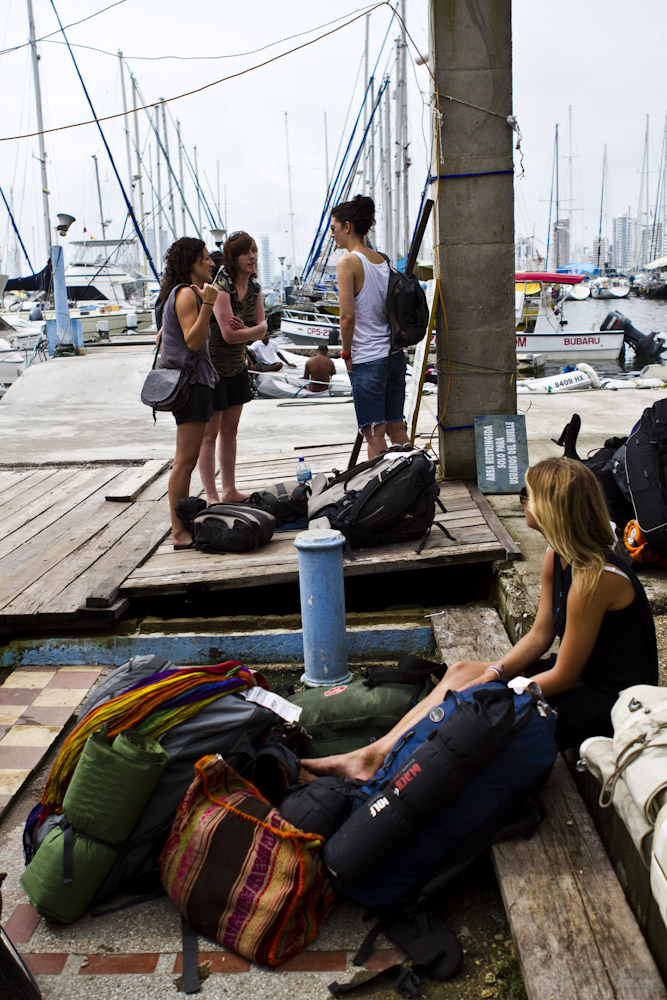 Travelers wait for their boat on the dock of Cartagena's Club Nautico. 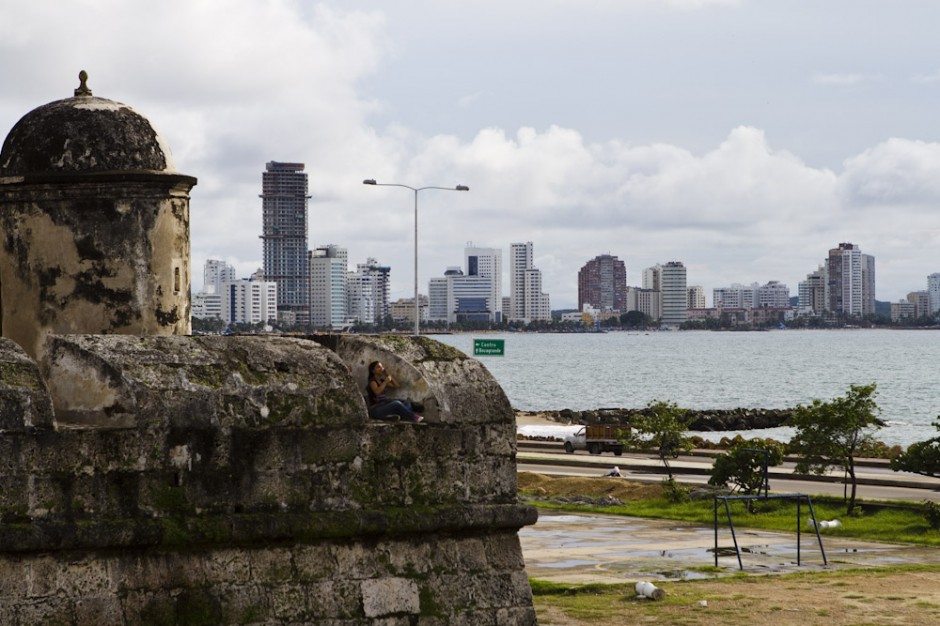 Visitor can wander the ancient streets of Old Town or mix it up a la south beach amongst the skyscrapers. 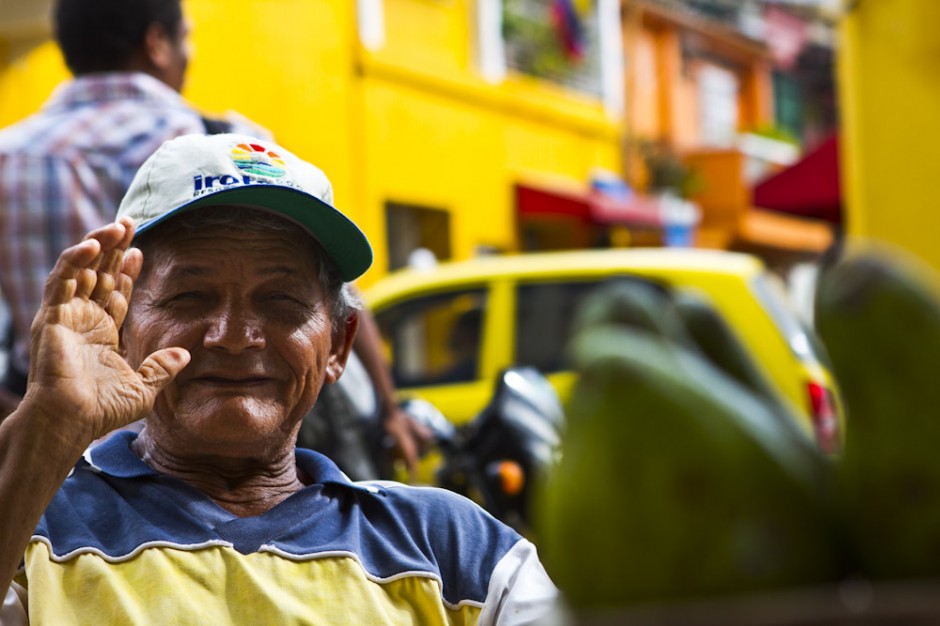 I found the streets of Cartagena to be full of smiles and easy waves. 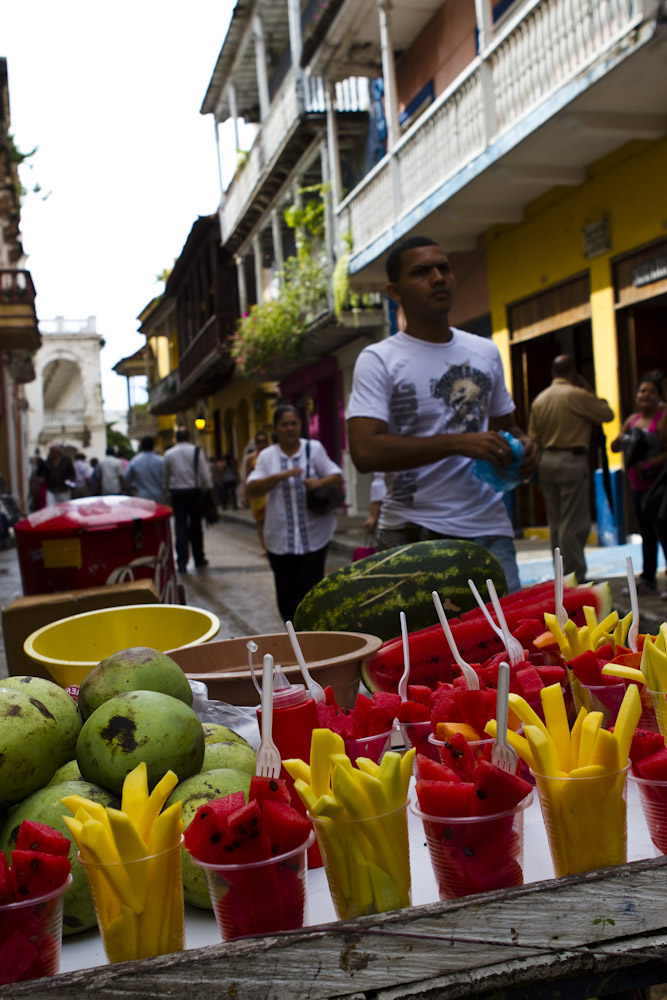 Taking the time to cruise through Cartagena while you wait for a boat is essential. The city's Old Town dates to the early 1500s. 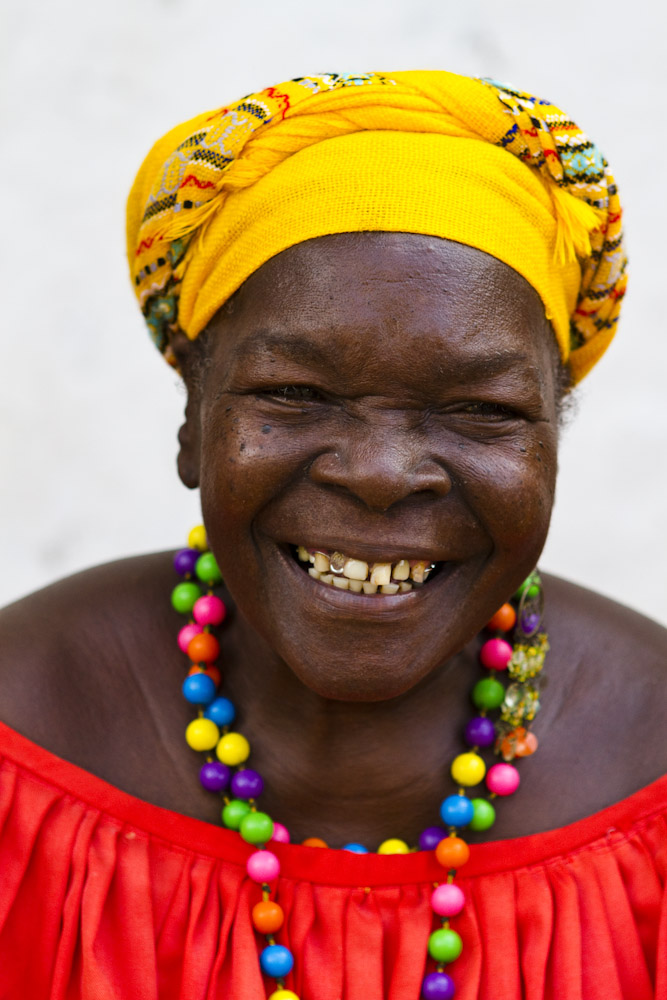 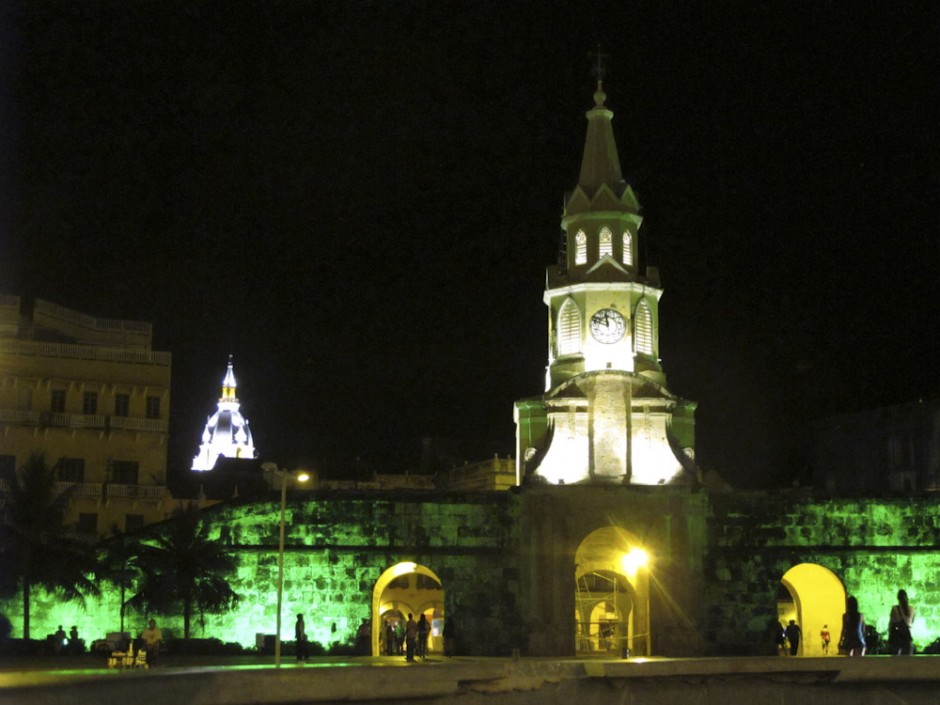 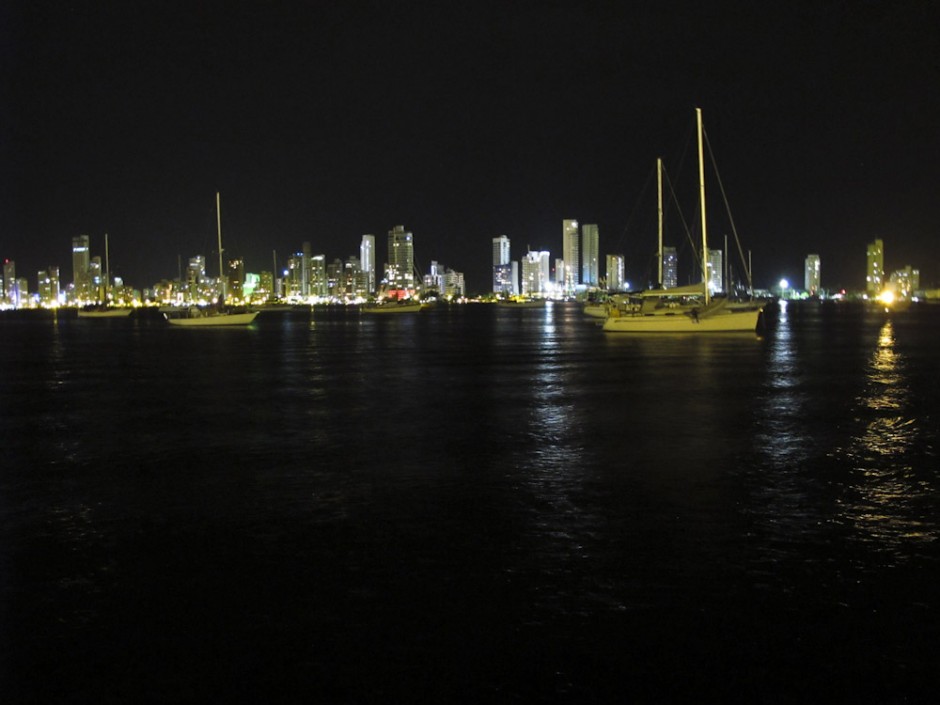 The skyline of Cartagena as we sailed out of harbor at night. 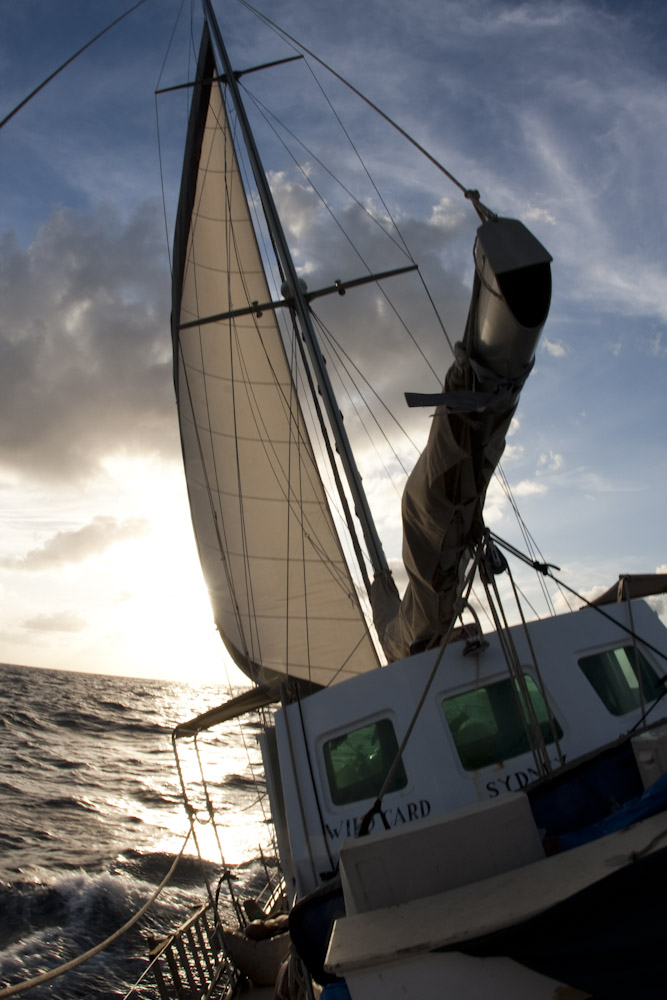 Enjoying the downwind run from Cartagena. 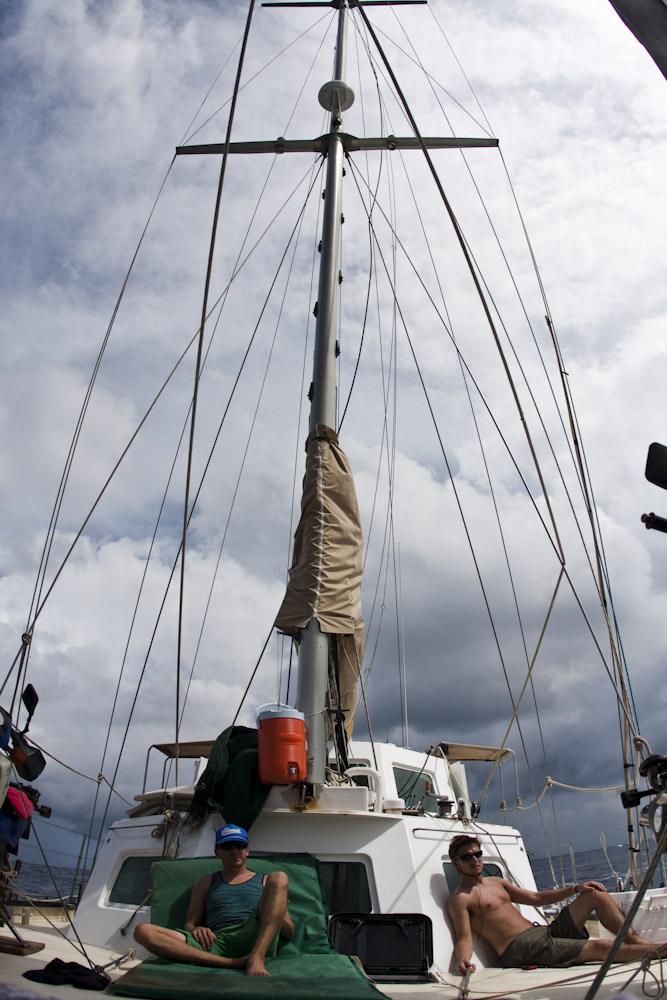 Enjoying an evening beer in the open ocean with the wind at your back will make a wannabe sailor out of anyone. 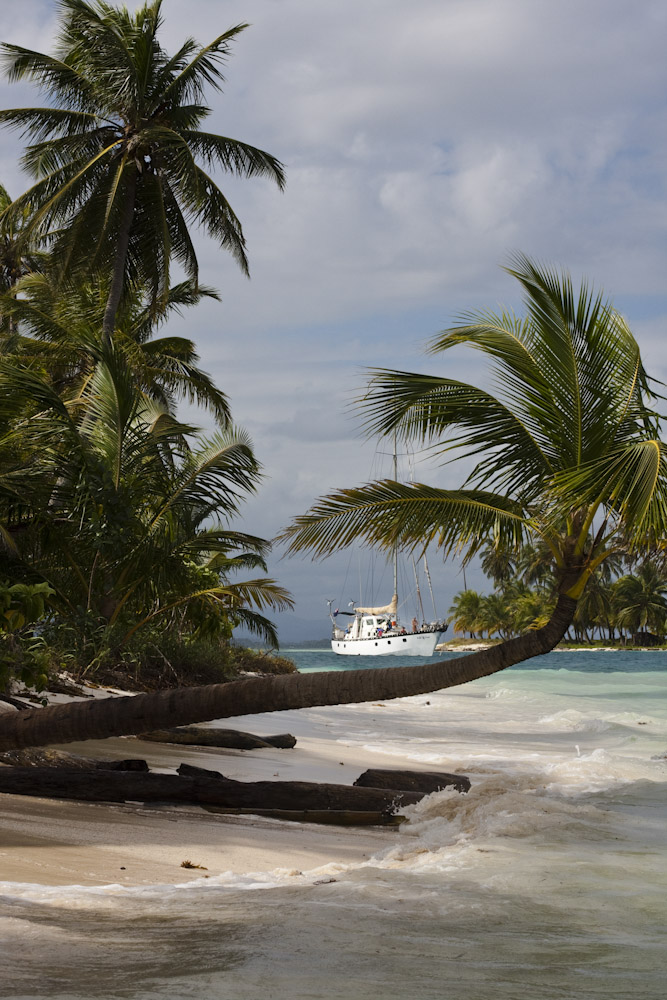 Our boat seen from the nearest island. 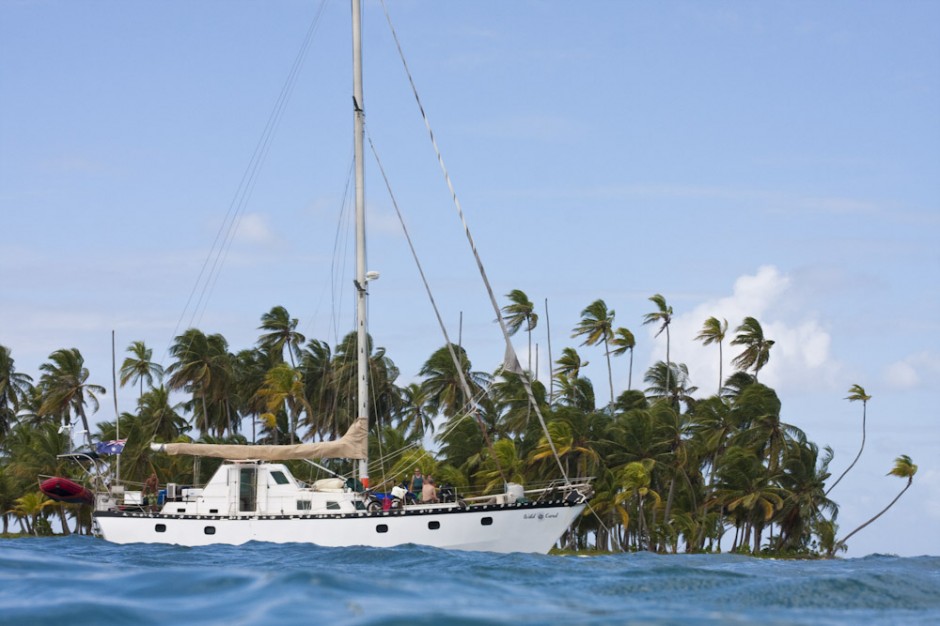 A sailboat anchored in sheltered water and surrounded by uninhabited palm-ringed islands is the Caribbean dream.. 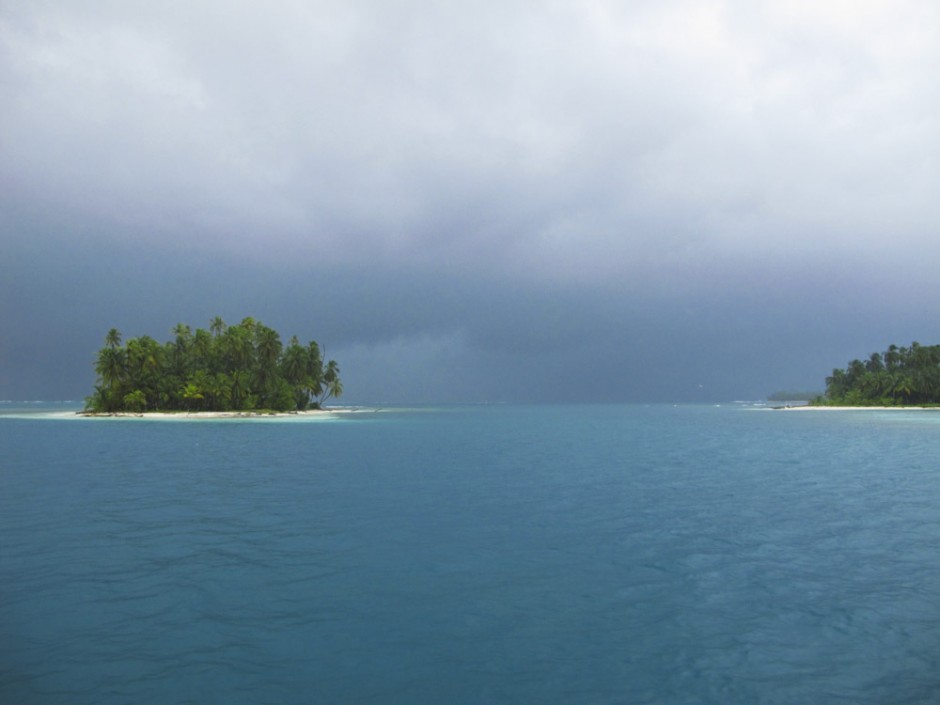 Storm on the horizon 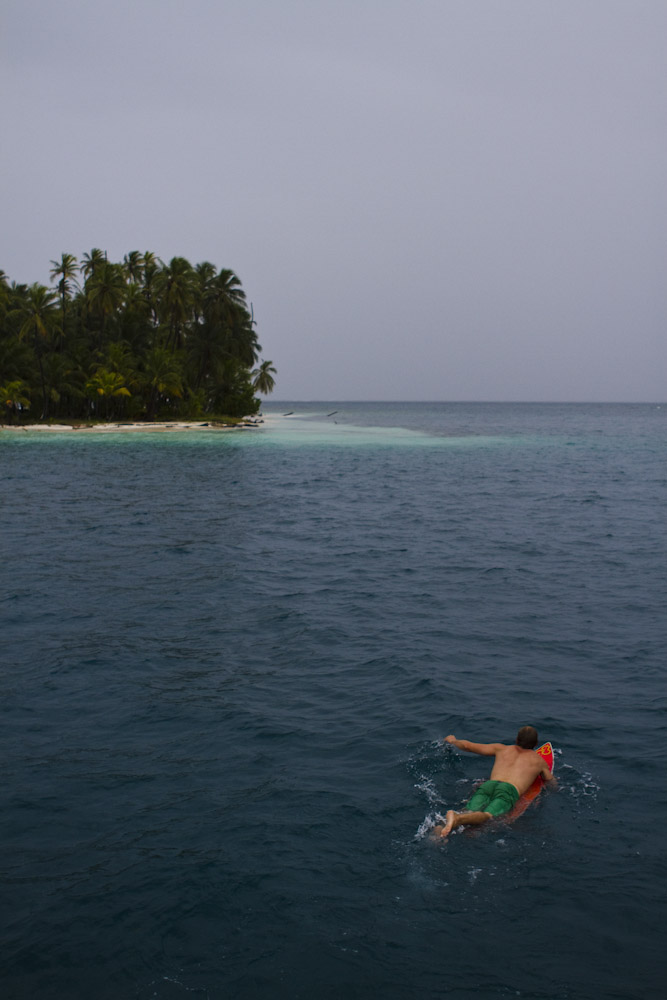 No waves in sight but the surfboards proved to be an excellent way to explore the nearby islands. 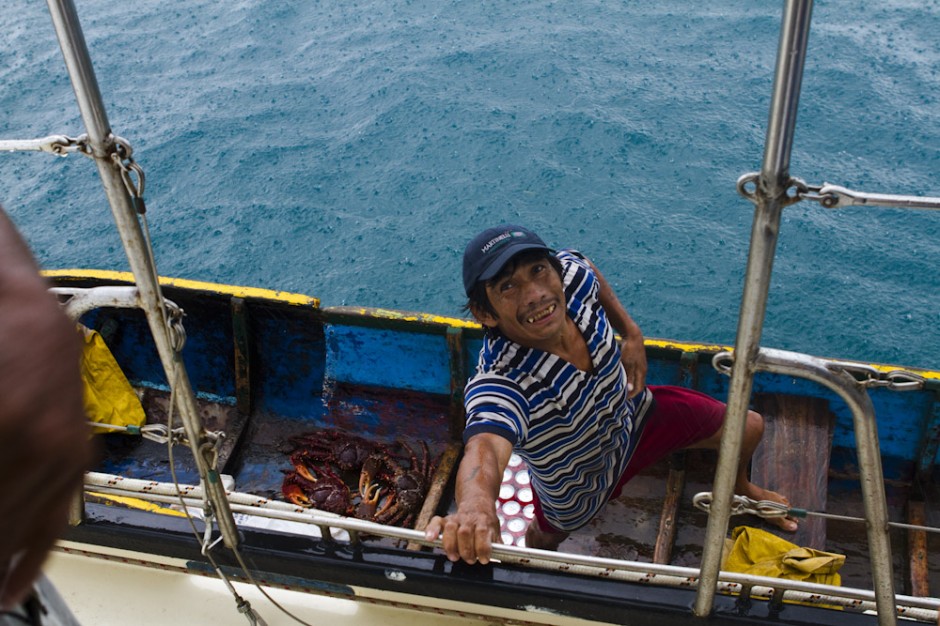 The arrival of tourist boats are instantly recognized by the local inhabitants; within hours, these guys pulled up with a boat full of crabs and lobsters. 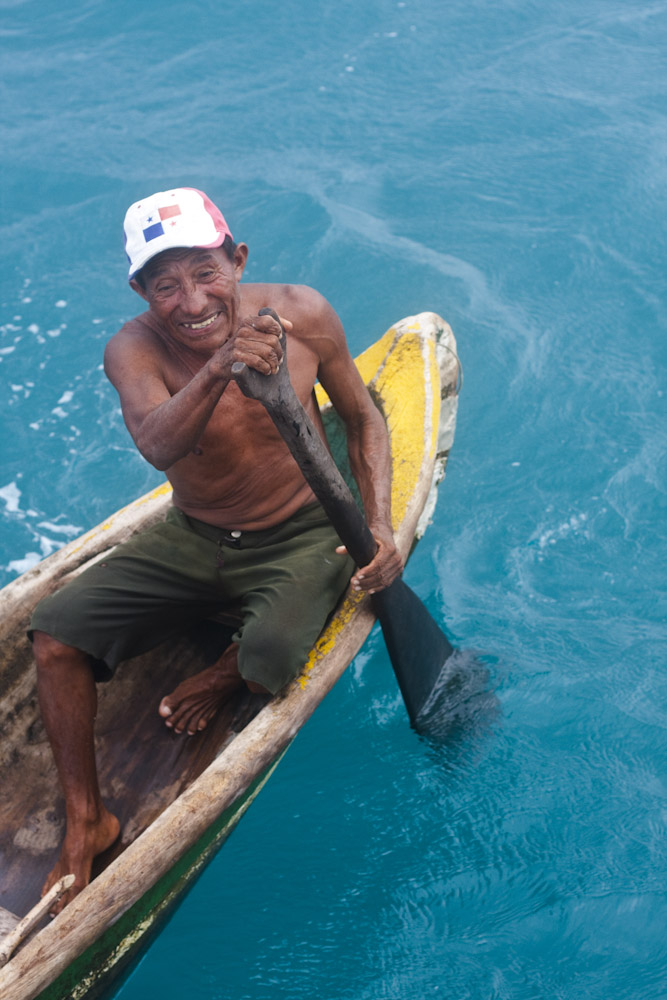 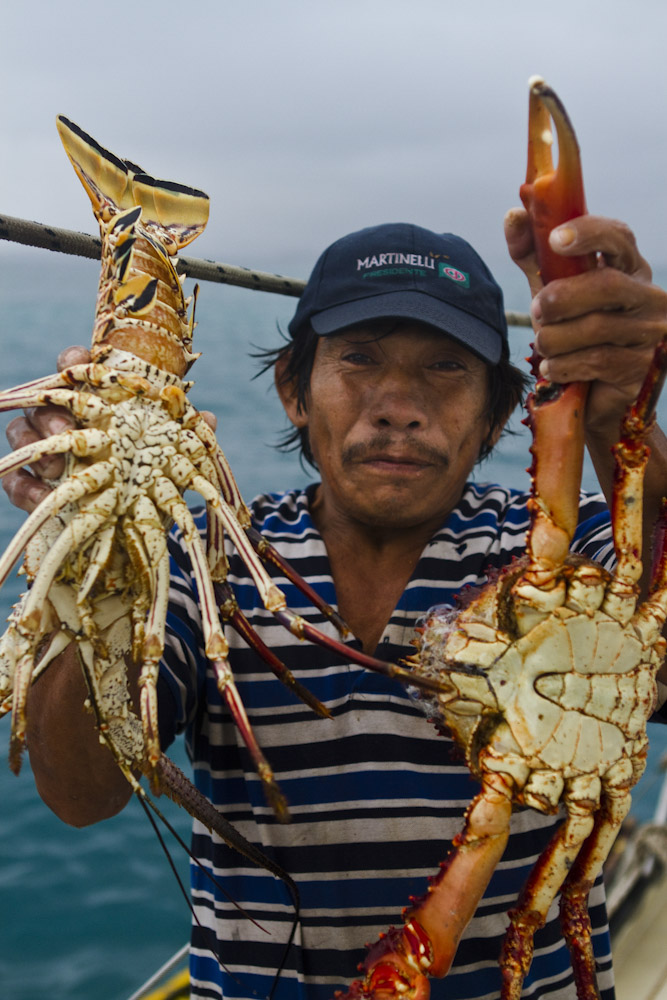 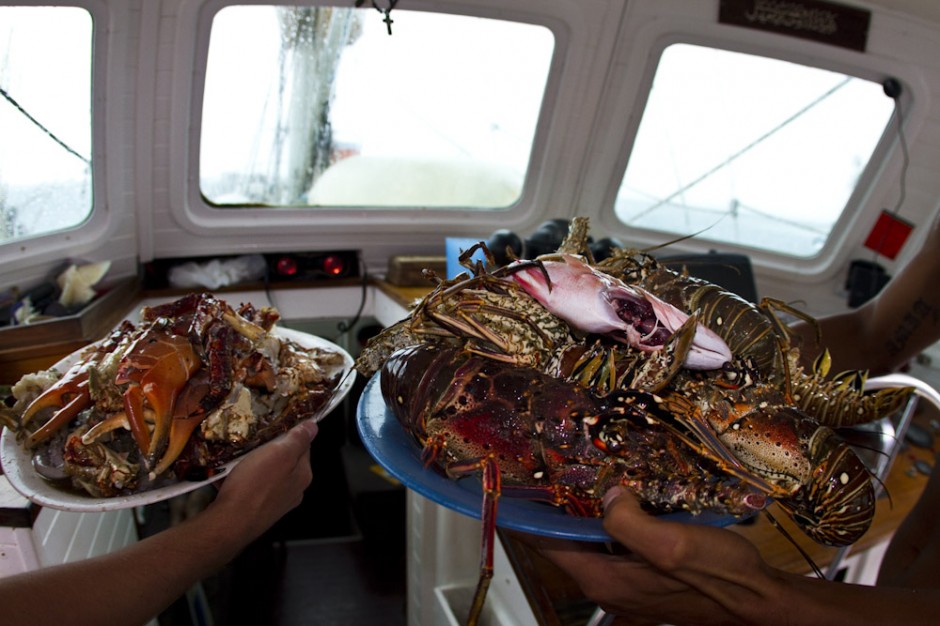 A huge buffet of fresh seafood from the Kuna ready to be cooked. 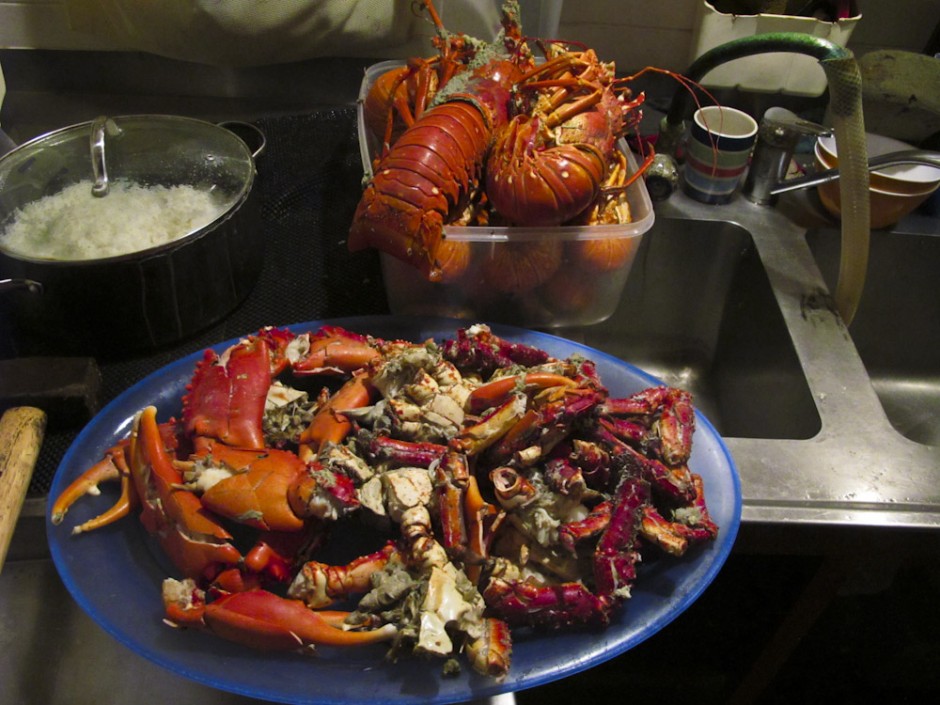 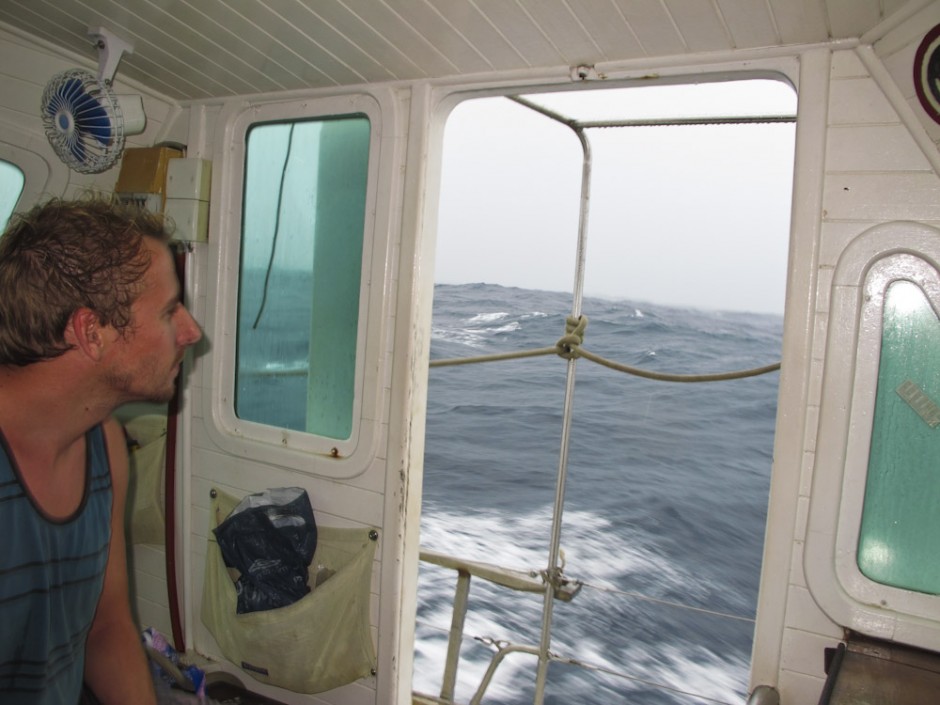 Kitt Doucette looks out into the void of stormy seas in open water. 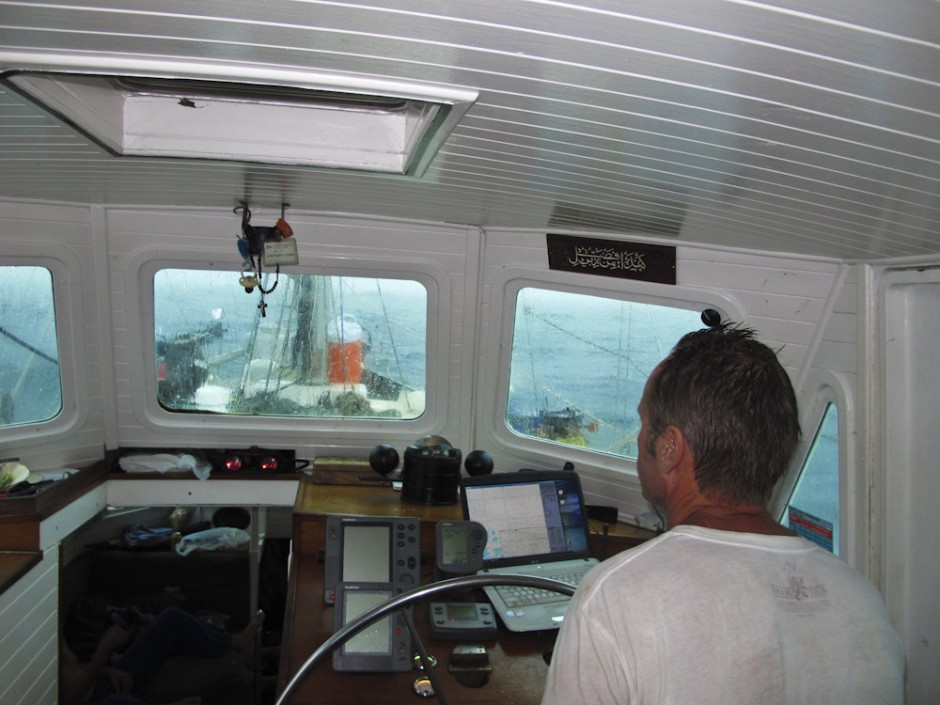 Captain John steers the boat into the storm right after we almost dumped it. A good captain is a must on this trip, and we were lucky to find a good one. 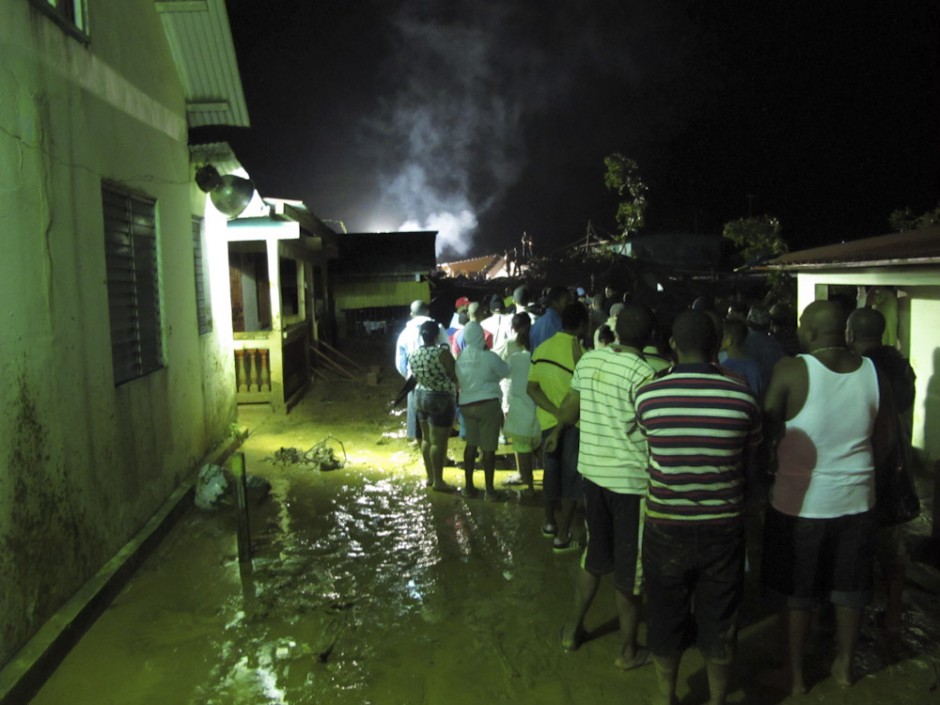 A mud slide in Portobelo leveled much of the town and forced us to continue on to Colón.