Pulmonias
A Mazatlán specific type of transport, the pulmonias are essentially open-air taxis. They look a bit like golf carts, and according to legend, when the pulmonias were first introduced in the 1960s, the regular cab drivers warned passengers that riding in the open-air cars would give them pneumonia (pulmonia in Spanish). The taxis are licensed and more expensive than the “regular” taxis or getting the bus, but I think open air is more fun, at least for one ride.

Pedro y Lola
The cost for a bottle of wine at Pedro y Lola starts at about $17, cocktails are under $10, and you can get my new favorite drink — Tonicol, the vanilla flavored cola that Coke unsuccessfully tried to get the recipe for. The restaurant is in the Old Town right on the original town square, Plaza Machado. On the weekend, cars aren’t allowed in the plaza and it becomes a mix of vendors, musicians, and other performers. 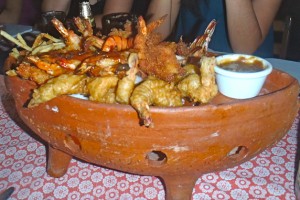 The Shrimp Bucket
The Shrimp Bucket, opened in 1963, was the first restaurant in the Señor Frogs chain, but there aren’t any yard glasses for your beer here (though there is a 2 for 1 happy hour special from 4pm to 9pm). The feature here is the shrimp, and it doesn’t just come by the bucket, but by the boat.

Diego’s Beach House
Diego’s Beach House is an open-air restaurant right on the water that serves strong drinks and fresh seafood. I’d recommend the shrimp tacos. I grew up in Kansas; a restaurant that is three steps from a white sand beach and thirty more steps from the Pacific is not something that I’m used to, and I kept interrupting my conversations to turn around and admire the view as I was eating. Don’t sit with your back to the ocean if you’re not used to beach-side dining; if I had the chance to do it again, I’d head straight for one of the hammocks.

Huana Coa Canopy Adventure
“Do we get to practice?” I asked after our safety lesson, looking down the zip line that ended far too far away and was far too high above the ground. “Yeah, on this first one,” said our guide. “There are eight more after that where you can get better.” “Great. Thanks.” 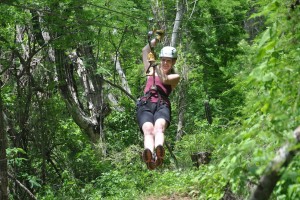 Huana Coa Canopy Adventure is about a 45-minute drive outside of Mazatlán, across the Tropic of Cancer, which meant I was adding both crossing into the tropics and ziplining to my first-time experiences in Mexico.

The nine lines range between about 80 and 130 meters long, and run through some pretty beautiful tropical dry forests. After unintentionally spinning around on my first ride and immediately and irrationally convincing myself that I’d lost control and was somehow going to die, I realized that, oh, this is fun. I really like this.

For those wanting to stay a bit closer to the ground, there is horseback riding and an ATV course. The $75 price tag includes a tour of the nearby tequila factory.

Deer Island
Of the three islands off the coast, only Deer Island is open for visitors. Catch a ride out from El Cid Marina. You can get a seat on a catamaran for about $45, or if you’re feeling posh and are there with a group, you can rent a yacht. Hike to the top of the island, kayak, ride a banana boat, or chill on the beach munching mangoes topped with chile powder.

Side note: I’d recommend taking some motion sickness pills for the ride to and from the island if you’re prone to sea sickness.

At Pueblo Bonito Emerald Bay Resort & Spa (try to say that 5 times fast after 5 poolside margaritas), you can save some cash and get a suite without a meal plan and just cook in the mini-kitchen, or you can go for the all-inclusive and have drinks and food covered.

There is a bar in the lobby, four restaurants, and several pools throughout the resort, but I spent most of my time at the swim-up bar. Such pretty words – swim-up bar. I don’t know who came up with the idea, but it was a fantastic one.

After checking in, a member of the hotel staff approached us and asked, “Would you like a ride to your room?” Excuse me? A ride? I’d never stayed anywhere that was large enough to have golf carts at hand to get guests from the lobby to their room. Why, yes, please, we’d love a ride. I’d also never stayed at a hotel with its own small flock of flamingos.

[Editor’s note: Kristin’s stay in Mazatlan was hosted by Visit Mexico, but all recommendations/opinions are her own.]

Tagged
Lux Travel Insider Guides
What did you think of this story?
Meh
Good
Awesome