If dogs are man’s best friend, then Dave Daley has 30 or so best friends.

But I’ll venture Dave’s sled dogs — a boisterous pack of mostly white mongrels that fill a rutted dirt and pine tree lot — don’t see Dave as a friend. I believe they revere him as god. The sun rises and the moon sets when Dave says it does. Food arrives, training commences, care and love are administered by Dave’s hand and at his command. And nothing excites the pack of dog-athletes more than the thought of Dave unclipping them from their chain and slipping the sledding harness over their muzzle.

Above Dave’s home flies the flag of the Metis Nation1, the loop of the infinite emblazoned on sky blue. Across the lane from the house that also serves as Churchill’s dog sledding HQ stands a tipi, and behind that a forest of hunkered pines. The lot is the home of Daley, his wife, and the many dogs that constitute Team Wapusk Kennel. Our car comes to a crunching halt, and I step into the tundra twilight as Dave steps out onto his porch and raises a hand towards my little group of journalists.

Black Carharts, black t-shirt, black ball cap through which a pony tail that could be called black in starlight but is shown in the late afternoon sunlight as a sort of fire-kissed brown — Dave, with his yard full of sled dogs and fingernails filled with dirt is known affectionately as one of Churchill’s ‘characters,’ and I can see why.

He addresses us warmly, but as soon as he’s begun to speak he is already pulling our chain. Smack dab in the middle of “polar bear alley,” Dave deals with the white behemoths as a fact of life and delights in kidding us out-of-towners:

We all consider, first repulsed at the idea of shooting polar bears, then grappling with the reality that for us journalists they’re just an abstract natural phenomenon, not a direct threat to house and home. Nobody says a word. Dave’s face breaks into a ‘gotcha’ grin.

“I’ve never shot a bear! Are you kidding me? Doesn’t mean that I won’t someday though…” The notion has been echoed in Churchill by men with rifles since I stepped off the train — Haven’t had to shoot one. Don’t want to. But I will if I have to. The fact is that bears are put down annually to protect the human population of Churchill, although all measures are taken to try to avoid euthanizing an animal. In Churchill they love their wildlife, but that doesn’t mean the guns aren’t loaded.

Besides being known as a world-class musher, Dave is also regarded as cultural preservationist, a leader in the sport of dog sledding, and a damn fine mechanic — a skill that keeps him in employ at the Churchill airport. His hands likely serviced the small passenger plane that will eventually spirit me back to Winnipeg. Dave founded and is the driving force behind the Hudson Bay Quest, a 220-mile annual dog sled race from Gillam to Churchill. The HBQ is designed to be a self-sufficient dog sledding adventure, where racers carry their own supplies for the duration of the race.

At the sight of Dave exiting the house, his 30 or so dogs erupt into a dervish of spinning, yipping, jumping, and clamoring. A chainlink pen full of puppies hunkers beside the house, its the tiny inhabitants already in training as Dave’s next generation of sled pullers. These little ones shove their snouts though the diamonds of the fence and follow his stride with an eagerness that could break your heart. 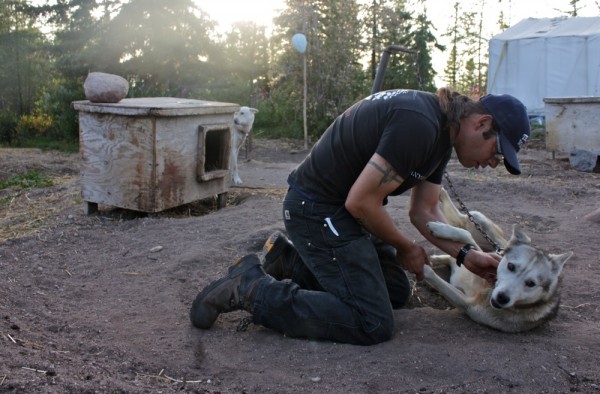 Specs is checked for injury, soreness, and ailments by Dave in his daily rounds.

The dogs, when excited, create a stimulating environment. Their barks and yips bounce off the hard-packed dirt. They jump up and down on their identical box dwellings. They run circles on their swivel chains and strain against their collars, raising their forelegs into the air. But there is no sense of danger that one might justifiably feel in such a ruckus. The dogs emit an electric excitement like a live wire spitting sparks, but they’re harmless sparks that tickle, not bite. Rain, Trixi, Venus, Specs, Thor, Blue, Kudluk, Abby, Tash, and two dozen others are simply vying for Dave’s attention.

Dog sledding is a full-time lifestyle. Dave must care for the complete well-being of each of his dogs individually. Approaching a dog named Specs, he speaks one command and places his hand on her back, turning her onto her side and extending her right front leg out. She submits to the prodding and stretching of the daily inspection. Dave’s fingers search the webbing between tendons and turn each paw in little circles, reading the dog for signs of pain and feeling for any lingering inflammation. During races he rubs a pink mentholated goo onto the joints of his team, making their tawny white fur a neon shock in the tundra snow. People think it looks funny, but apparently it works wonders for the race-weary dogs.

“I have to be a vet as well as their coach and master,” he says, rolling Specs back onto her feet and walking briskly to the next dog. The mutual devotion that the musher and the dogs demonstrate towards each other is astounding. The cost of caring for and training so many animals (not to mention the substantial price of competing in dog sled races) requires that Dave, and any musher that commits his life to his team, make sacrifices and work unceasingly.

“These dogs would die running for me, they would run until they dropped if I asked them to. Of course, I would never. But I have to be careful. I have to know how much to run each dog. How long. Can’t let them burn out. You have to take everything into consideration — the temperature, the altitude, the speed at which you’re running them.”

On top of everything else, Dave is also a doggie sociologist: “I have to know who doesn’t get along with who. I can’t run two dogs next to each other that don’t get along with each other. It’s like people — if I strapped you to some guy you hate, are you going to be able to concentrate on your work? No. It’s the same with the dogs.” 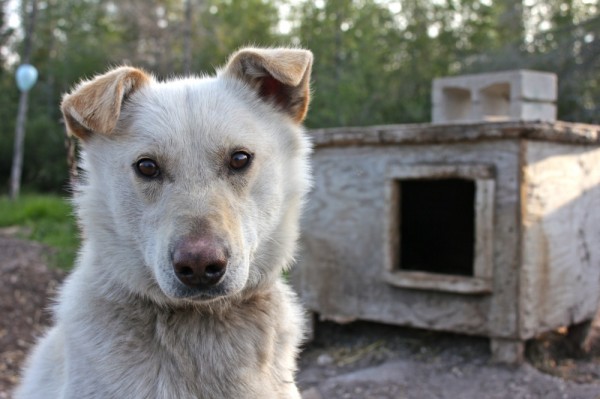 Each dog has his or her own space in the yard. Thor sits patiently for my camera in front of her house.

I rustle the tops of heads, scratch behind ears, slap rumps, stroke muzzles, and coo ‘g’boy g’boy g’boy’ as I move from dog to dog. My hands may well smell like dog funk for the rest of my life. That’s OK — dog funk is an oddly comforting aroma.

Visitors to Wapusk Adventures’ kennel can get even more hands-on and experience the thrill — I mean genuine thrill, not some gimmicky sideshow — of dog sledding. The ‘Ididamile’ allows grinning fools like me to get whisked along for a round of dog sledding with Dave at the helm. During the summer and fall, when snow is absent and the ground is all dirt and shrubs and lichen, the dogs train in a rubber-wheeled cart. And so I climbed into the dog cart and readied my camera.

He shouted something like — but probably not — ‘Heeyah!’ and the five white dogs shot forward against the bulk of the cart. Gravel spit from the pads of their feet and we jerked forward. The dogs didn’t gradually gather speed as I had expected, but went from stationary to racing into the dusty dusk in a matter of seconds. The late sun threw long shadows on the gravel.

Clutching the rail of the cart with Dave behind me steering, I felt like a little kid who had been let in to see the 747 cockpit (I grew up when that still could happen to a lucky bugger) — a little self-conscious, a little thunderstruck, and having a blast.

If you’re in the Churchill area (probably for the polar bears or beluga whales, definitely not for the nightlife) and you’re feeling adventurous, come visit Dave and his dogs and claim the ‘Ididamile’ for yourself. I’m glad I did. What I thought would be ‘another tour’ ended up being a memorable highlight of my already incredible experience in Churchill. To book your tour or learn more, contact Wapusk Adventures.

1The Metis are a nation of aboriginal peoples of Canada, descendants of First Nations people and Europeans. Some 400,000 people self-identify as Metis in Canada.