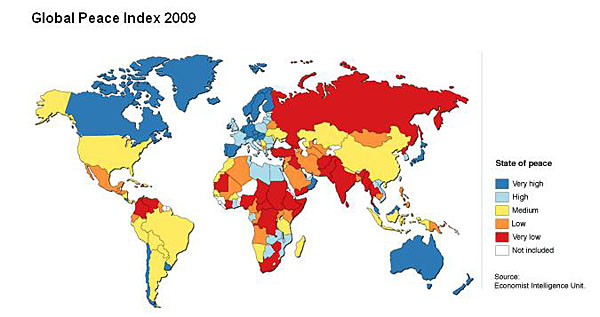 Some recent events have lowered Iceland’s peaceful ranking. New Zealand is there to slip into top spot.

It’s nice to know that amongst the crime, corruption, and political dissent in today’s world we can rely on some places to go where we can feel relatively safe. The Global Peace Index 2009 has found New Zealand to be the most peaceful nation on the planet, usurping Iceland for top spot.

The GPI, however, doesn’t paint a rosy picture overall. As Vision of Humanity states, the results suggest that the world has become slightly less peaceful in the past year. This could be due to increased conflict in some areas and rising food and fuel costs globally. Rising unemployment, falling housing prices, and lack of savings are also contributors. 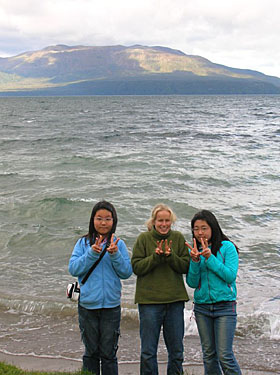 New Zealand: A diamond in the rough

The Kiwis have got it good, according to the GPI. Ranked 3rd in last year’s index, it made the move to number one due partly to greater political stability combined with Iceland’s fall (which is attributed to some violent demonstrations and perceived criminality in the wake of a large banking collapse).

Other factors that play in NZ’s favour are the low homicide rate, high level of respect for human rights, and harmonious relationships with neighbouring countries (i.e. Australia). As far as the military goes, New Zealand also scores points for how little it spends on the military (George Dubbya would have problems with this concept) and also its low numbers in exports of conventional weapons.

As if New Zealand didn’t already offer enough reasons to visit or relocate there, the GPI this year is another notch in the belt. Now you can bungee jump, swim with dolphins, wind surf, snowboard, explore caves, visit volcanoes, tour wineries, kayak, walk the Milford Track, and watch wildlife — all in peace.

Matador cares about your safety when abroad. Here are some articles we’ve published in the past that might come in handy the next time you hit the road:

10 Common Travel Scams (and How To Avoid Them)

Tagged
Culture Trip Planning New Zealand
What did you think of this story?
Meh
Good
Awesome