WHEN YOU’RE INVITED to stay for two nights at a beachfront spa resort, you don’t decline. At least that’s my rule. I’d heard the name, Tigh-Na-Mara, spoken many times and even had driven by it more than once in the time I’ve spent on Vancouver Island’s east coast. It had always intrigued me.

Using it as a base to explore Parksville Qualicum Beach, and to indulge in Tigh-Na-Mara’s mineral pool and tasty cuisine, my partner and I took in some known, and some lesser known, things to do while we were there.

* Carlo was a guest of the Parksville Qualicum Beach Tourism Association and Tigh-Na-Mara Seaside Spa Resort. 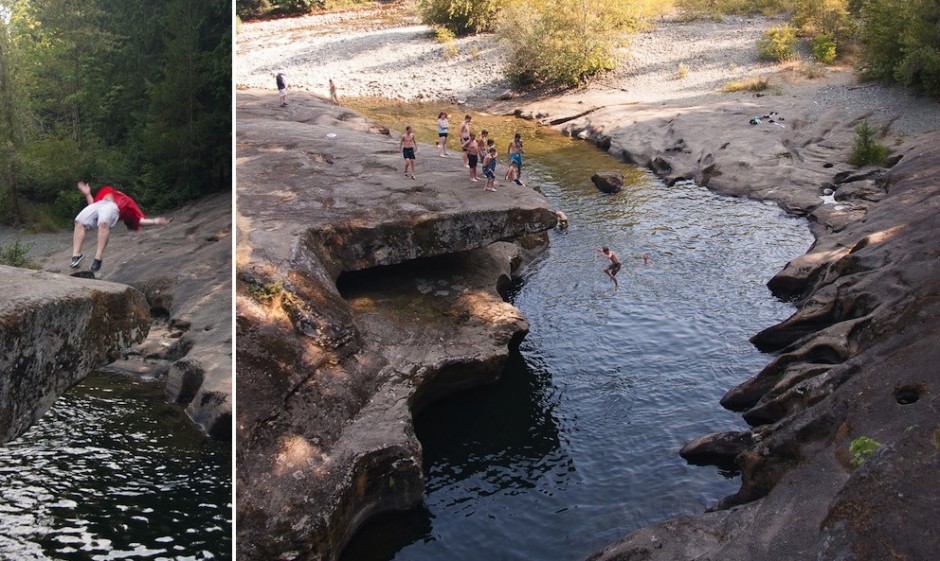 The 5km trail that connects Rathtrevor Beach to a pedestrian suspension bridge that crosses Englishman River also leads to this sweet locals' swimming hole. As we approached, the sounds of play got louder and we saw why everyone was having so much fun. There's plenty of space to lounge around, even shallow pools if you want to just sit in the water. We regretted not bringing our swimming gear, but we did roll up our shorts and wade around up to our thighs.

Not too far from here, and also connected by a gravel cycling path, is Englishman River Regional Park. Plenty of shaded walking trails lead to viewpoints, along ponds, and to the Englishman River. Bathing suits be damned -- we were determined to get into the water, so we found a trail that ended at a very quiet spot on the river and had a quick skinny dip. As we were tying up our shoes to leave, a lady and her dog emerged onto the small beach. Close call! 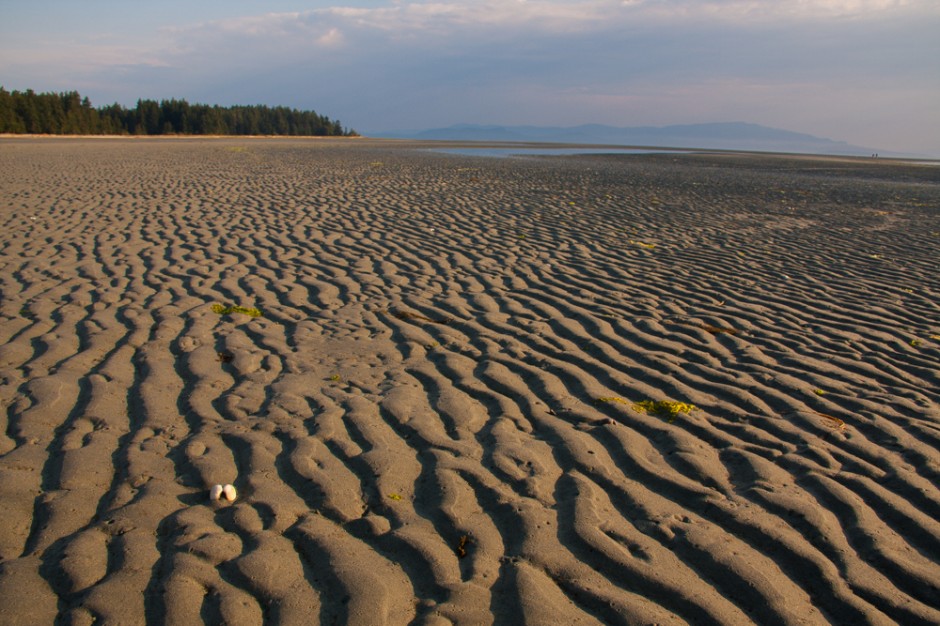 At low tide the beaches go on for what seems like forever. The first morning, we stepped out of our room and hit the beach for a walk. The distances are deceiving; it's not until you've walked out a long ways and look back on the rapidly shrinking buildings on the shore that you get a good sense of just how extreme the tides are here.

At the Parksville Community Park, loungers plunk their beach chairs right in the shallow water to stay cool, while kids scream by on their skim boards. At high tide the water is among the warmest in Canada for swimming. 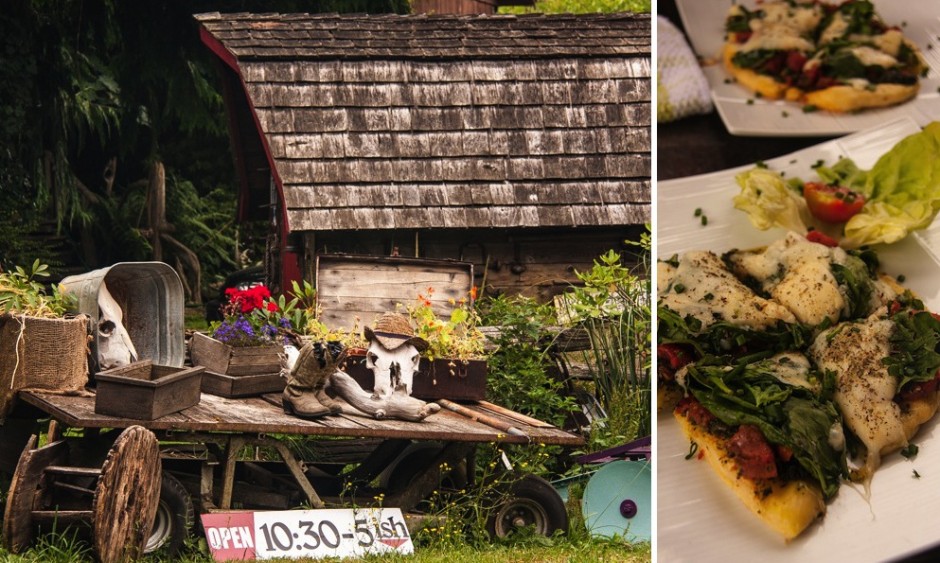 It was a total fluke that we ended up at Lori's Whiskey Creek Farm, a couple of kilometres off the road that leads to Tofino on the west coast of the island. We were driving by and the "gluten-free" caught my partner's eyes (she's gluten-intolerant), so we decided to check it out. It turned out to be one of the highlights of our trip. It's a beautifully kept farm and the bakery is entirely gluten free.

There's a notion that gluten-free can't be as tasty as the "real thing," but this bakery lays that idea to rest. We ordered up a couple of pizzas and watched them pluck some of the veggies and herbs right from the garden. As we ate our lunch, cinnamon buns were baking in the oven; once we were done with the pizzas they came fresh out, steaming and delicious. 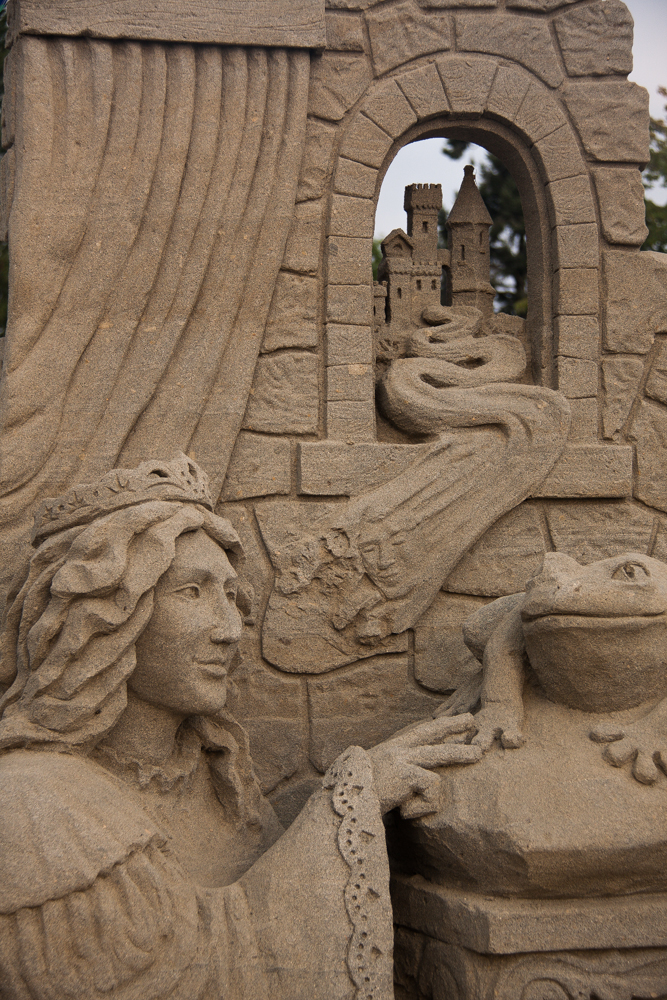 It wasn't our first time to take in the sand sculpting competition, but every year it's different, and I don't think I'd ever tire of seeing what people can do with sand. If you go, make sure you walk all the way around the sculptures; you shouldn't miss the details on the back. 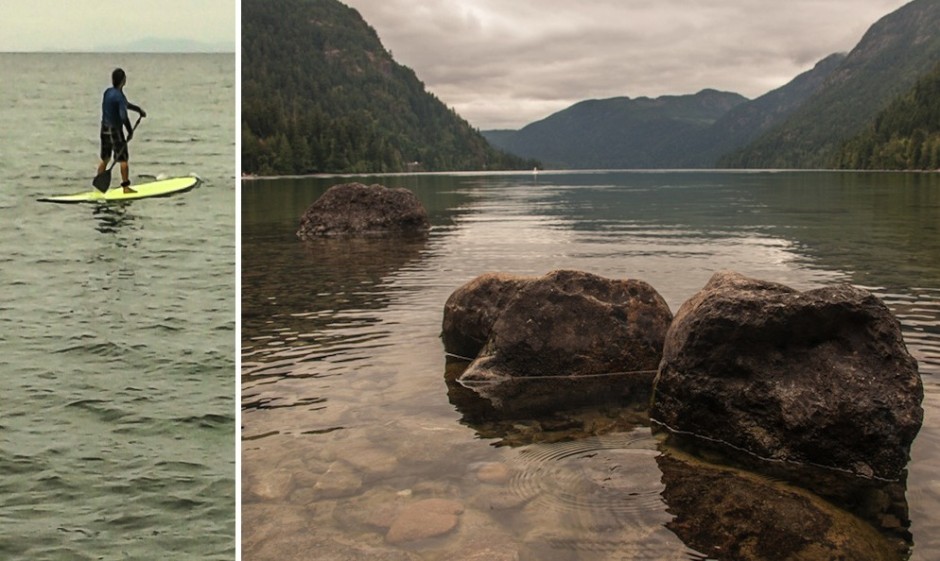 As luck would have it, the day we got to go "SUPing" took a turn for the worse. The clouds rolled in overhead and it got windy. Colin from Island Surf Company met us at Qualicum Beach, about a 10-minute drive from Parksville, and dropped the boards off before leaving us for a few hours. The plan was to travel down the coast and back, but before we left we made the smart decision to test the headwinds and realized that if we went very far downwind it would take forever to get back, not to mention be exhausting. We ended up staying in the vicinity and practiced our skills in some very choppy waters. I'm happy to report that neither of us fell in.

A good choice, and one we wished we'd thought of before, would have been to go SUPing at Cameron Lake (pictured to the right above). When we saw these still waters after our SUPing experience on the ocean, we were kicking ourselves. The added bonus is that the lake is near the surf shop, both on the road toward Tofino (the Alberni Highway).

Notes From a Modern Cave Man