“GIBRALTAR IS WEIRD AND awesome.” That’s what I titled my photo gallery on Facebook days after settling into my new hometown of La Linea de la Concepcion, the little border town sitting smack between Spain and Gibraltar. I’m one of those hypocritical Facebookers that scoffs at relentless status updates but spends more time crafting a witty and well-thought-out name for the albums I’m sharing, but this time, I didn’t even have to try. That’s what it is. Weird, and awesome.

A few quick warm-up facts about Gib (aside from the fact that it’s a 1,200-foot, mile-long rock plunked randomly in the middle of a vast sea and flatland):

With stereotypical red phone booths, Fish & Chips spots, and a ton of English signage popping up out of nowhere amidst so much Spanish and Arabic, Gibraltar is a weird mind-trip that any traveler looking for something unique should check out. Flights go in from the motherland daily, or just head across from Spain. Don’t forget to stock-up on electronics, jewelry, liquor and cigs–you’ll see what I mean. 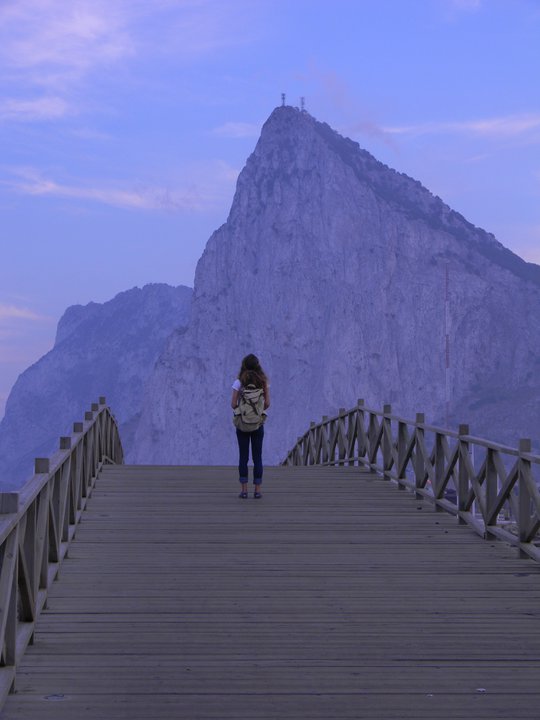 Seeing the Rock for the first time is something magical. It comes out of nowhere, rising up like a mountain emerging from the flatlands, frozen in time. Here, my friend Meg lets it loom over her from about a mile away as she stands on the boardwalk in La Linea de la Concepcion, the Spanish border town before Gibraltar. To her right of the boardwalk are the massive, crumbled ruins of an ancient Roman fortress. It was demolished a few decades by Franco, paranoid that it could be used as a stronghold against him. 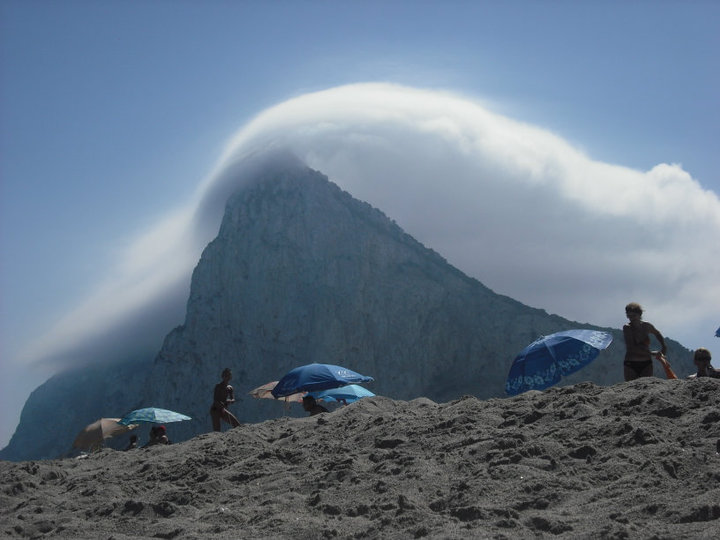 An example of the "nube sombrero," or cloud hat, that always seems to be lurking over the rock. Even in the sunny Mediterannean climate, a large cloud is always there to remind the British expats of their motherland's overcast complexion. The beach here is in La Linea, where during the summer all the nightclubs and discos close up shop and move their operations next to the water. Girls, wear a tight-fitting dress--or the strong gusts of wind that pass through will keep you occupied. 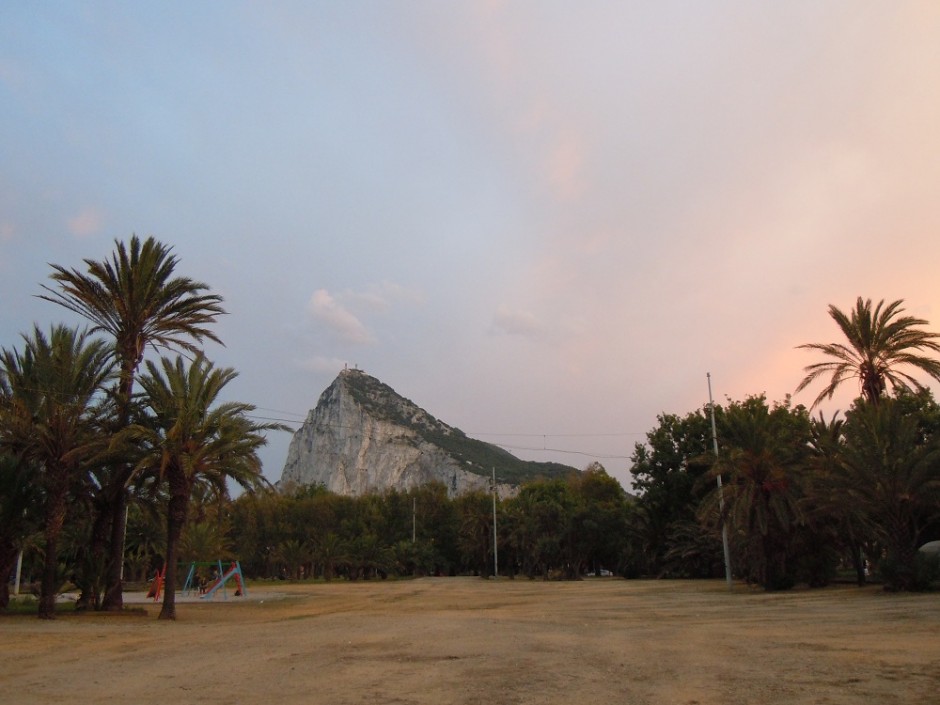 The Park in La Linea

Across the Spanish border in La Linea de la Concepcion, one of the first things you'll encounter is a huge park of palm trees and dirt. It's the only park in town, and fantastically located next to the beach with epic, Jurassic Park-like views of Gibraltar. No one ever goes there, though, except high school kids on the weekend nights who leave behind a lot of broken glass. The entire park is filled with old World War II bunkers, along with a skate park, and on Wednesdays it's used as a giant flea market. 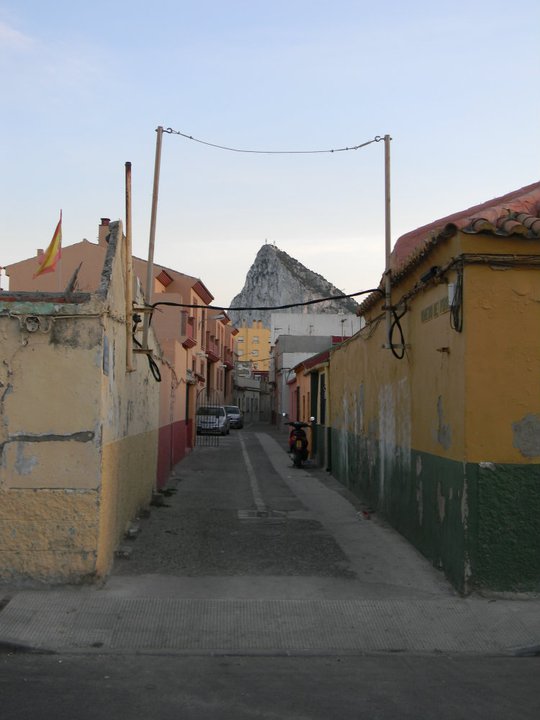 No matter where you go in the Campo de Gibraltar (the outlying area surrounding the Rock), its impossible to escape the peak's gaze. This particular alleyway is only about 100 yards from the beach. For whatever reason, the closer you get to the beach, the more barren and in disrepair the buildings get.

Sudden bouts of intense fog are common, especially in the spring, as you can tell from these two views from the same Gibraltar-facing balcony. 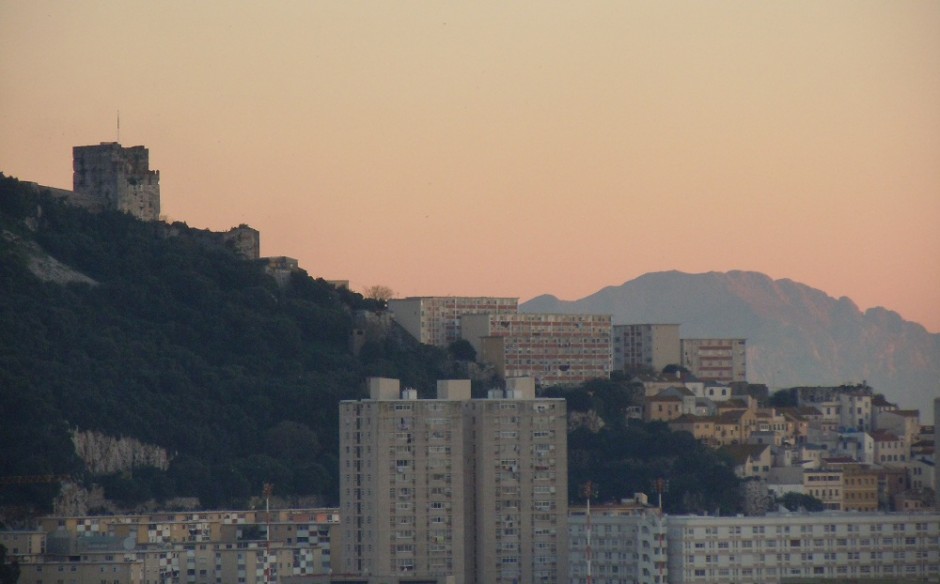 In Gibraltar, one never forgets their place in geography--or history. Here you can see the Moorish castle from the 700s, now a tourist attraction/the city jail, hanging over the Rock as the mountainous Moroccan landscape lurks in the distance. According to legend, the Strait of Gibraltar was formed when Hercules was tasked with pushing them apart with his bare hands, giving them their nickname, "The Pillars of Hercules."

Anyone crossing the Spanish border into Gibraltar will have to cross over a fully-functioning commercial airstrip that divides Gibraltar from the mainland. It's probably the only place in the world where traffic jams occur due to plane crossings, and it's not uncommon for pilots to abort a landing when the winds get too strong. Instead, they just re-route to Malaga, or circle around for another try. 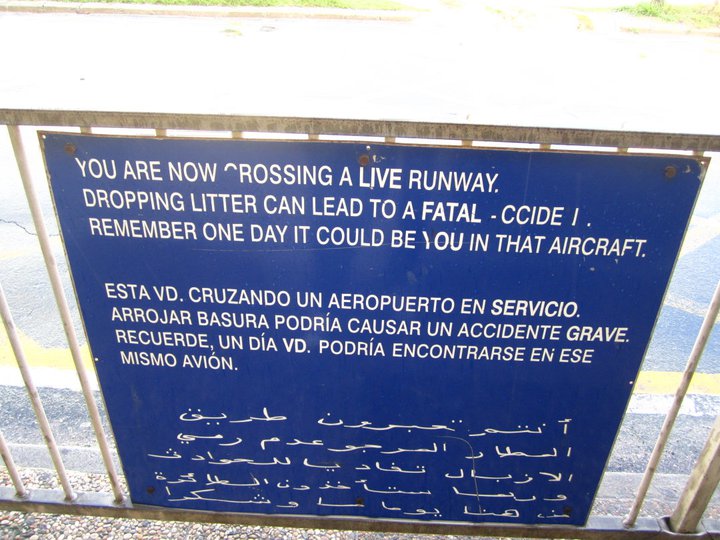 Easily the most confrontational warning sign I've ever seen. But then again, the runway was also pretty pristine. 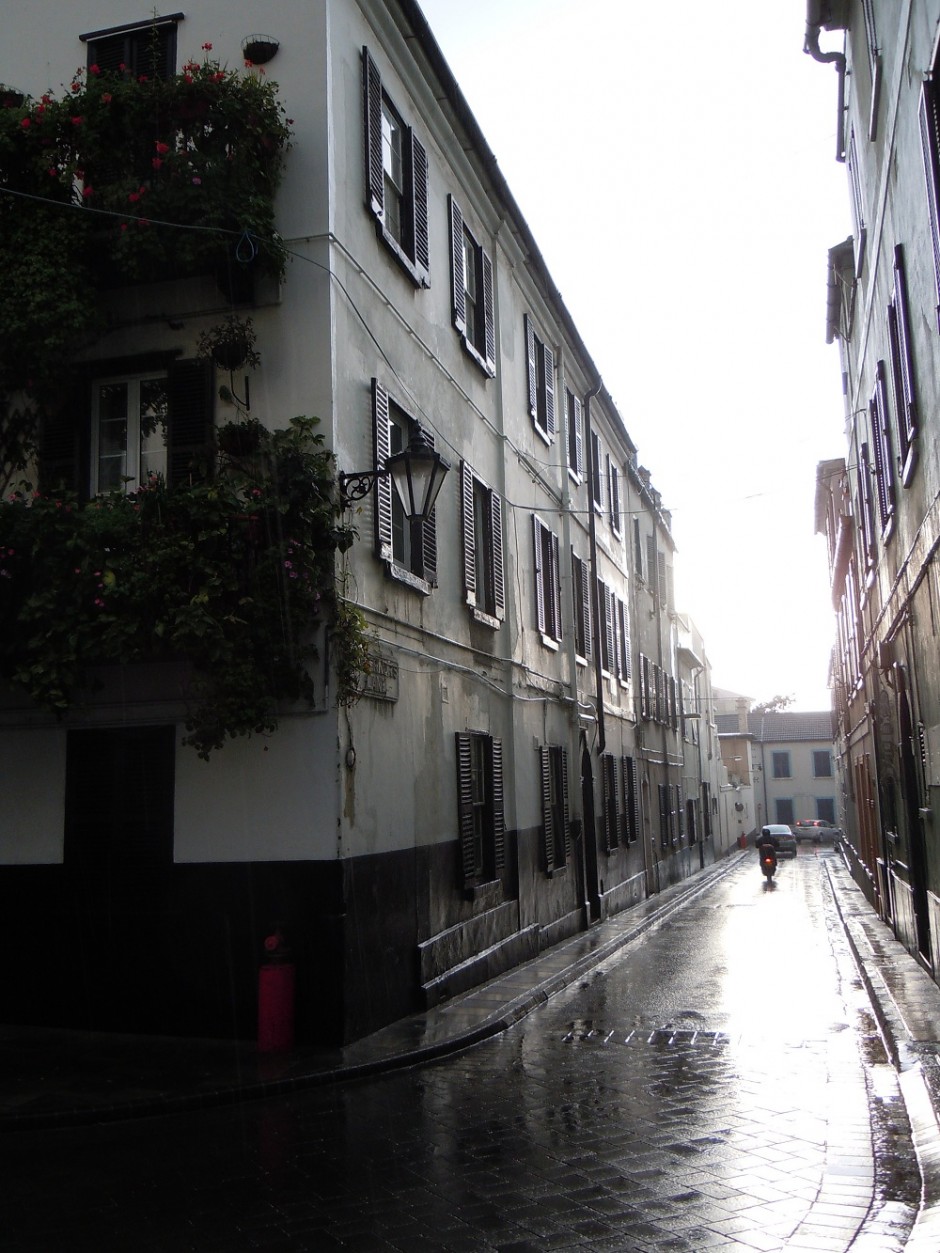 Gib in the Rain

Traffic in Gibraltar is mostly a mix of mopeds and lorries, with a few small cars and Land Rovers thrown in for good measure. While the town center is for the most part pedestrian-only, you'll be hard pressed to find a navigable sidewalk most anywhere that permits auto traffic. I recommend taking the bus if you're headed anywhere south. 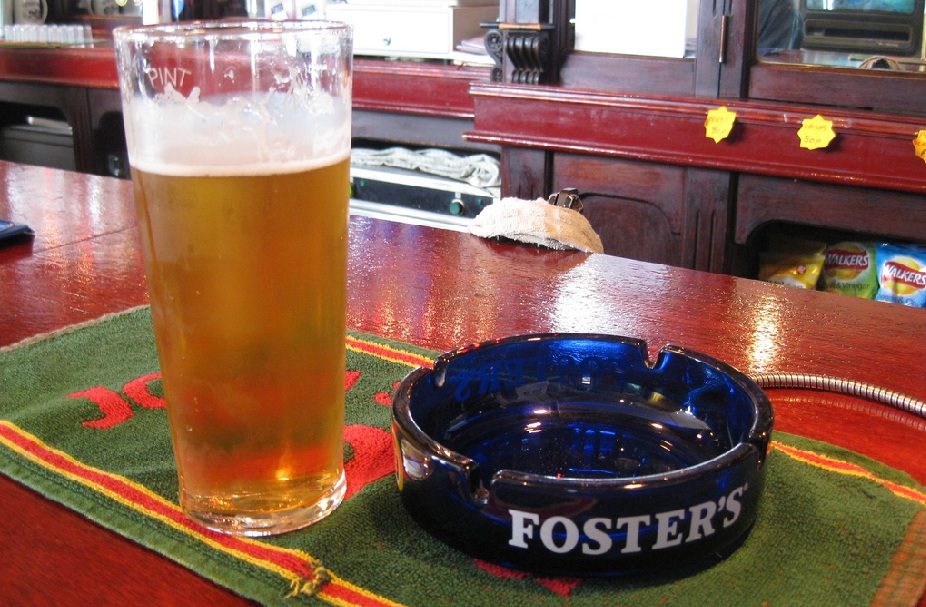 Unlike Spain, Britain, and much of the rest of Europe, smoking is still perfectly acceptable in just about all of the bars, where the minimum drinking age is only 16 years old. This may or may not have something to do with the fact that cigarettes are completely untaxed here, going for around 12-15 pounds a carton. Several of the students I taught at school were suspended for cig-smuggling. They said their parents forced them to do it. 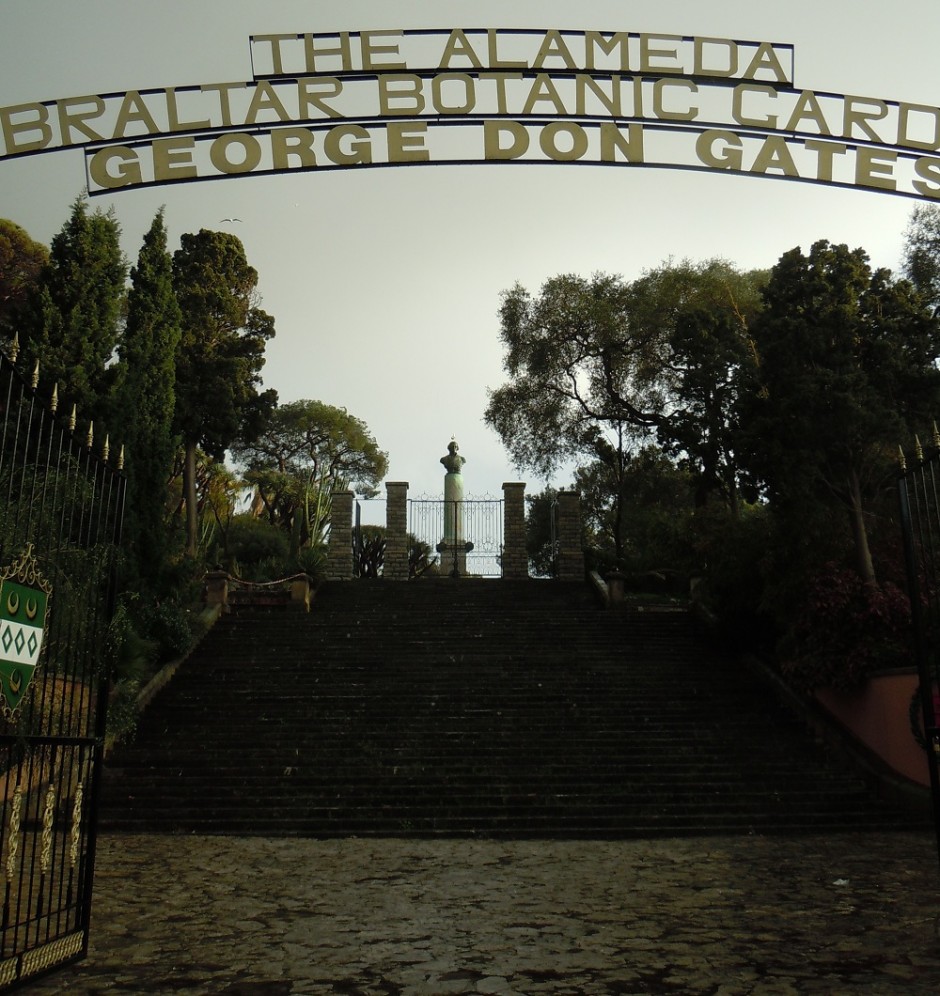 One of the most overlooked places in Gibraltar: the Alameda Botanical Gardens. They're actually a great shortcut for walking up to the Upper Rock Nature Preserve, and offer a decent chance of a monkey sighting close to sea level. 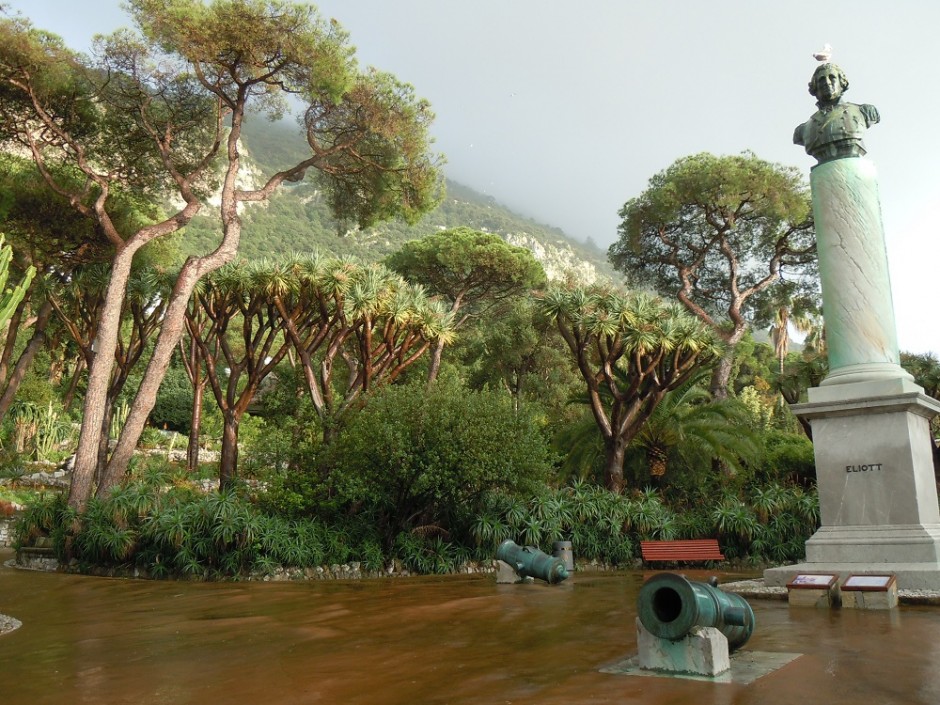 A seagull finds a perch atop a statue of an old British general, probably looking for his friends. Gib is home to one of the world's largest bird migrations, with more than 120 species flying north with every changing season. So don't feel put off or unlucky if you're hit by a stray bit of bird poop. 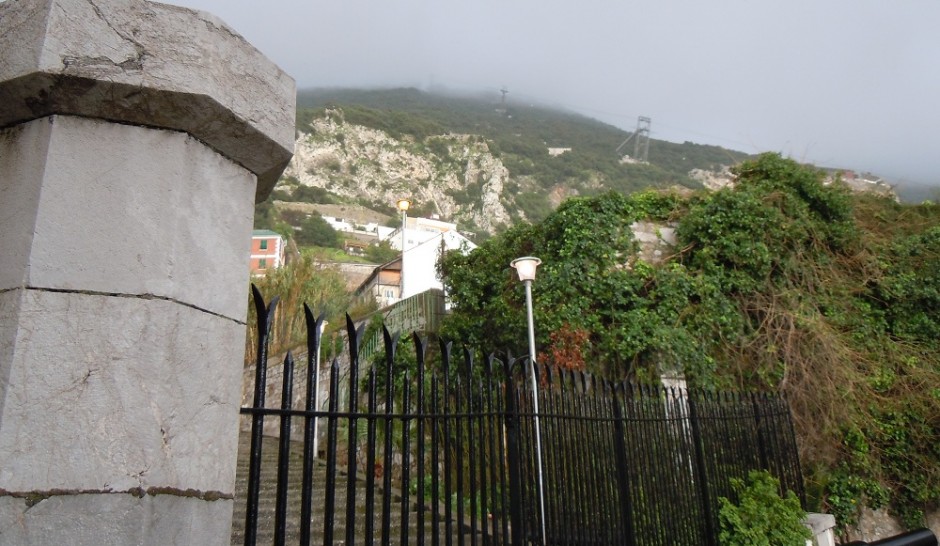 Up the Cable Car

Looking up from here, near the King's Gate, you can make out the faint outline of the cable car that runs to the top of the Rock. There are three ways up the rock: by cable car, by hired van, or by foot on the trail. While it costs around $20 US for a round-trip cable car, if you're short on time, it's definitely the way to go. Pro tip: take a one-way up, and then walk the way back down, it's much cheaper, more scenic, and drops you off directly next to plenty of places offering a cold pint. 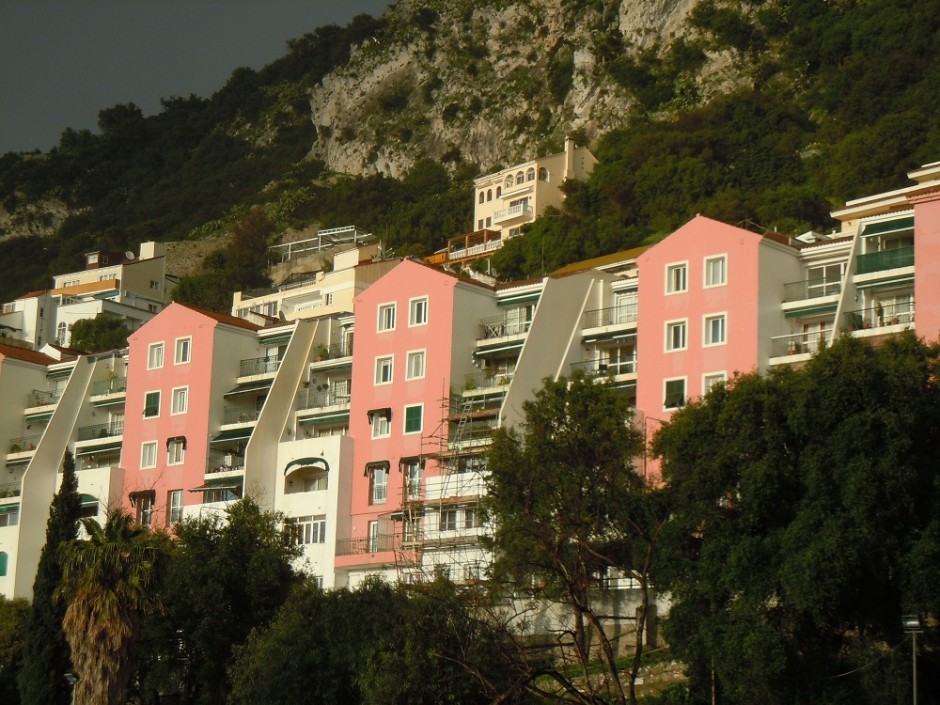 With over 30,000 people in less than a square mile of habitable real estate, builders get creative. This is some of the most expensive property on the Rock outside of the actual houses on the southern part of the island that have "real" yards and pools. Rent in Gibraltar is nearly twice as expensive as in La Linea, so many just walk across to work every day. 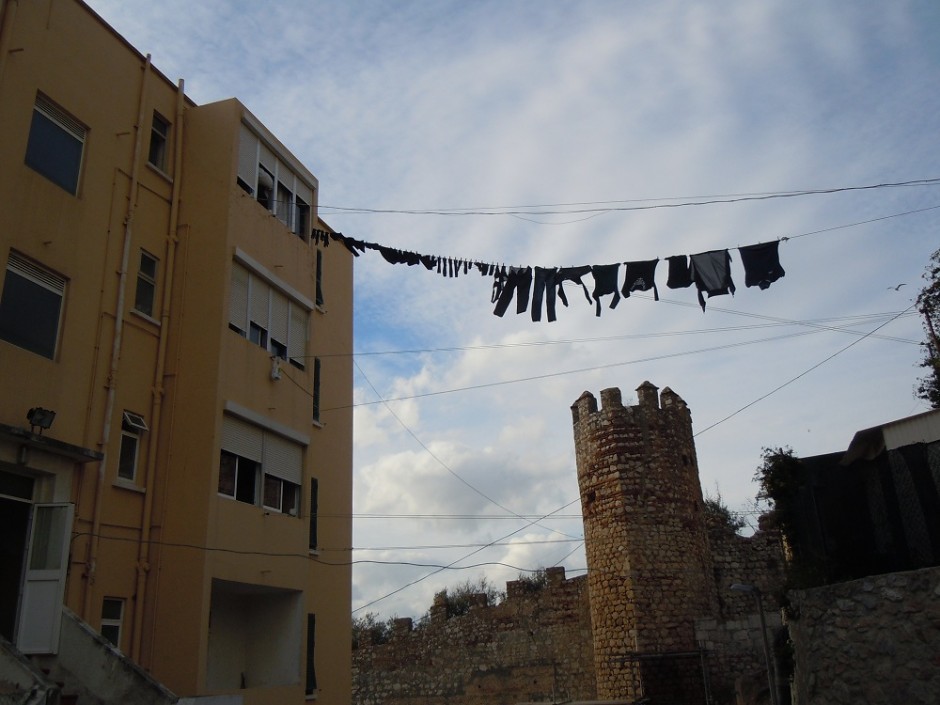 With all the monuments and ruins and monkeys and nature, it's easy to forget you're in the middle of a city. Over the years, laundry-hanging techniques have become incredibly developed, probably due to the fact that I've never seen a dryer in all of Spain or Gibraltar. 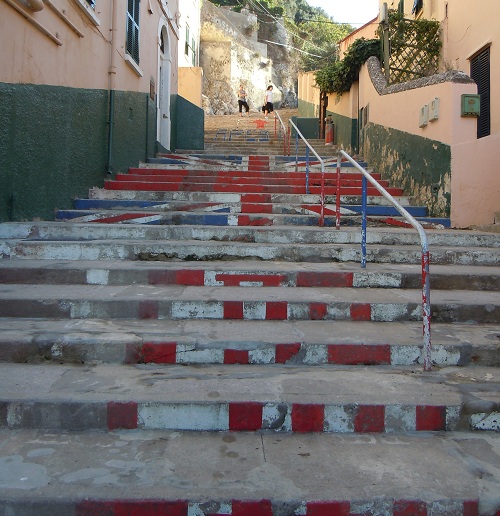 Most tourists never know it, but there's hidden staircase that brings you quickly up the Rock and drops you off at the Moorish Castle found just behind the city library. You'll know it when see it. 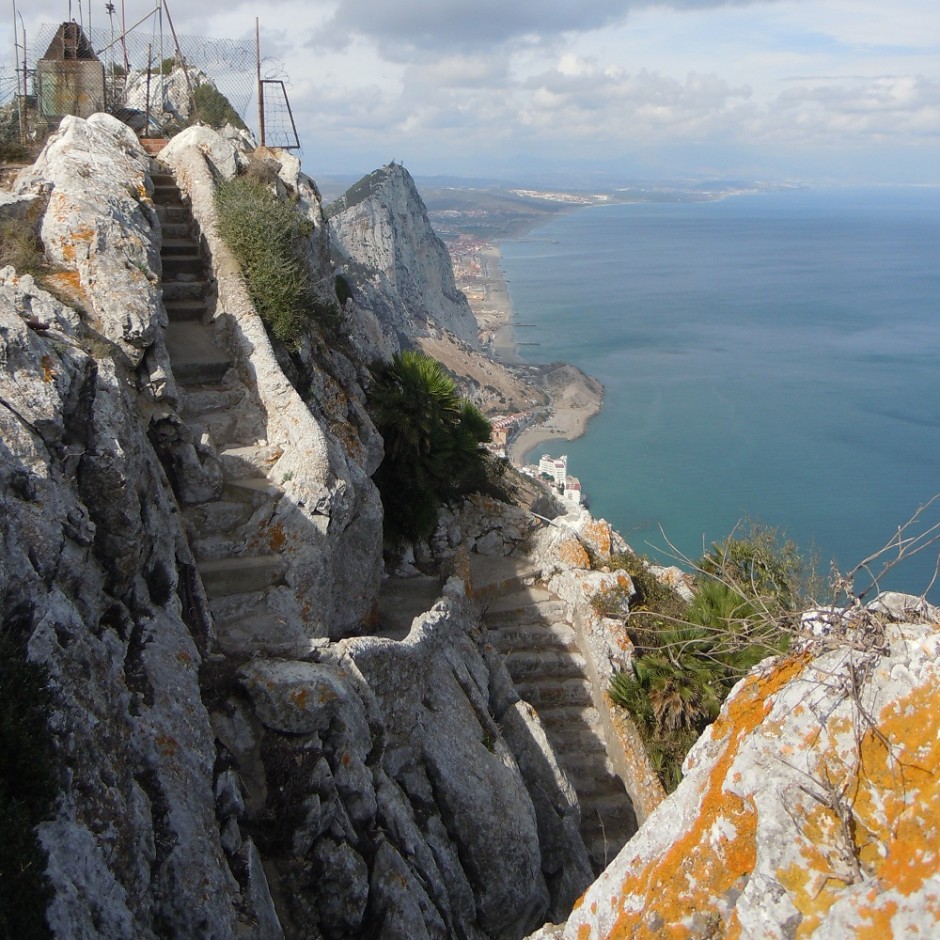 Along the way up the Mediterannean Steps, you'll find plenty of picture-taking spots, and on a clear day the Costa del Sol is visible nearly all the way up to Marbella. It's also a great spot to look for dolphins and whales spouting up--though you're so high up they'll just appear as blips on the radar. Also a great opportunity to see if you can throw a stone into the sea from up here. You can't. 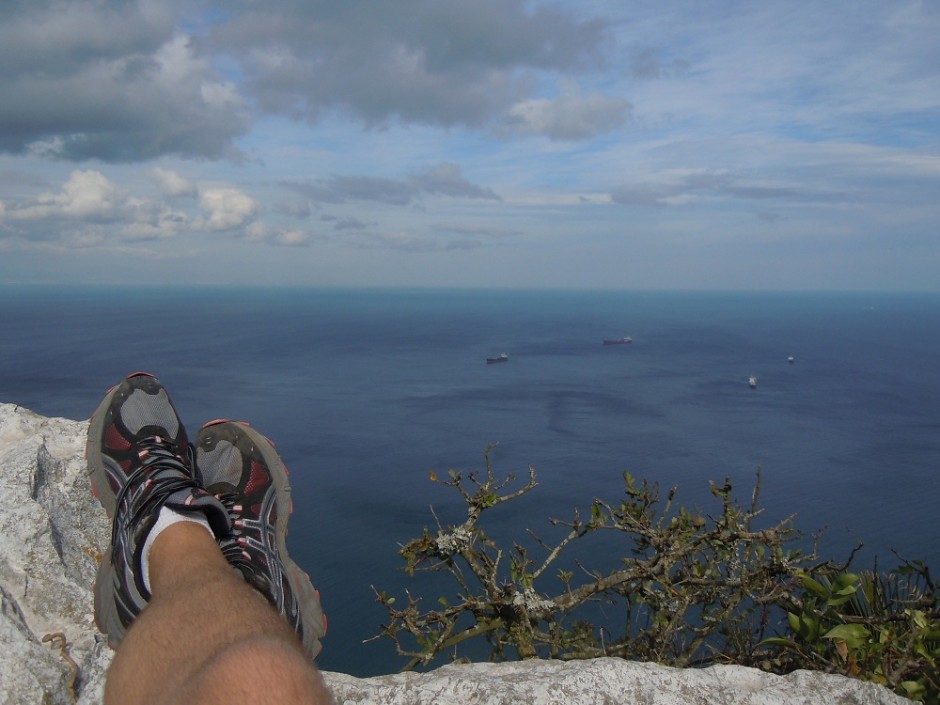 The top of rock is filled with craggy cubholes suited perfectly to reclining. While it may not be stuffed with down feathers or as "comfortable" as your leather couch, it's a view that's been seen by humans for tens of thousands of years, and not a bad one at that. 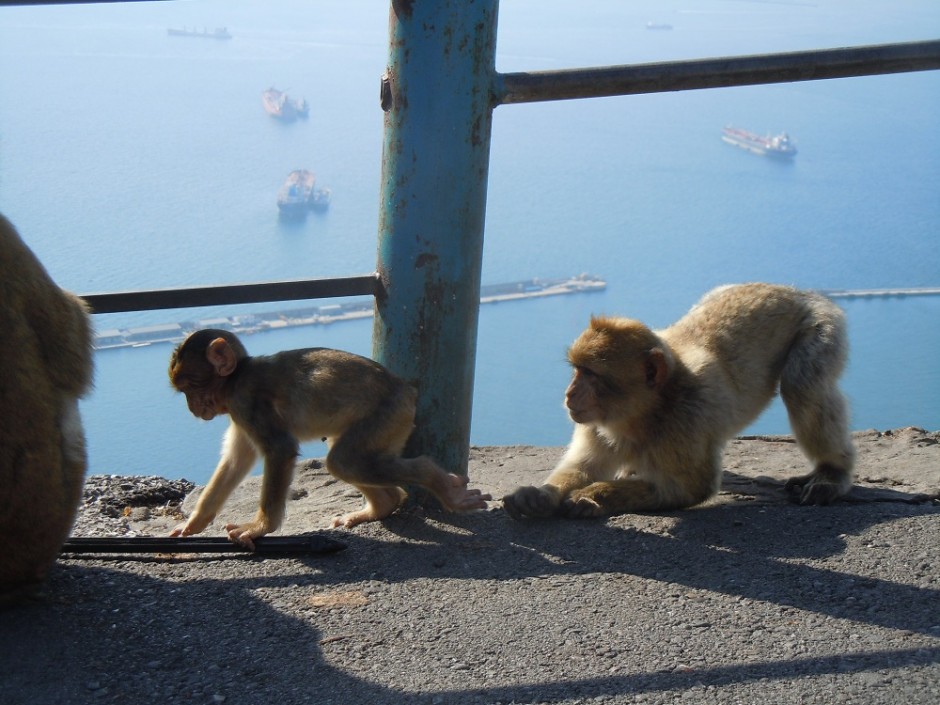 There are about 250 of the Barbary Macaques living on the rock, but you'll only see little guys like these at the top where they're well looked-after. I've never heard of a bird swooping in for a monkey abduction, but I'm sure it's possible. 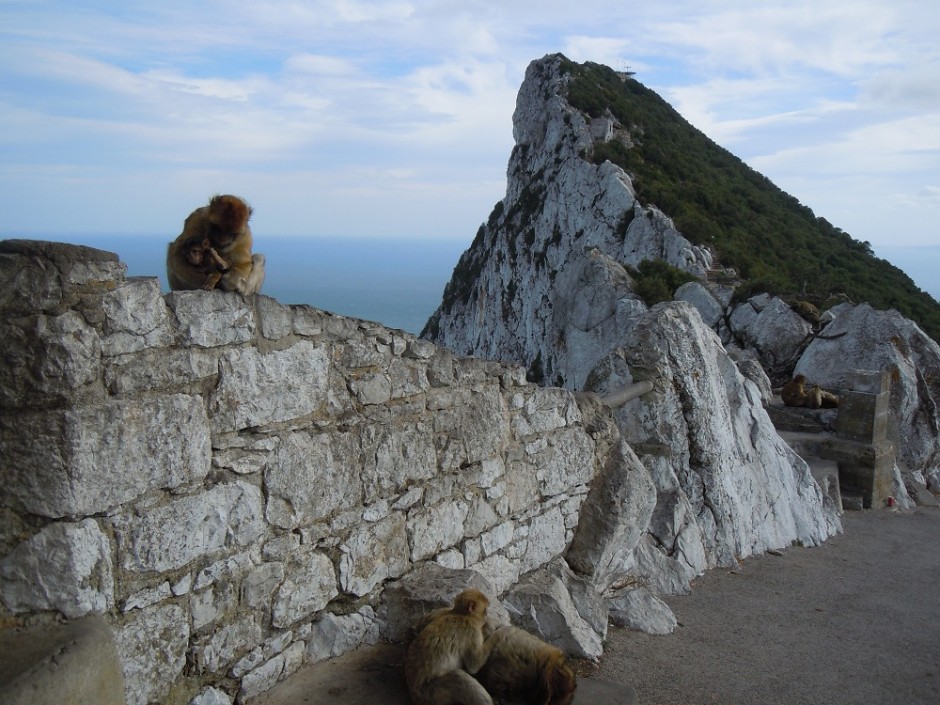 The monkeys, being the monkeys they are, are obsessed with picking each others' hair. If one jumps on your head, don't be surprised if they start giving you an impromptu scalp examination. 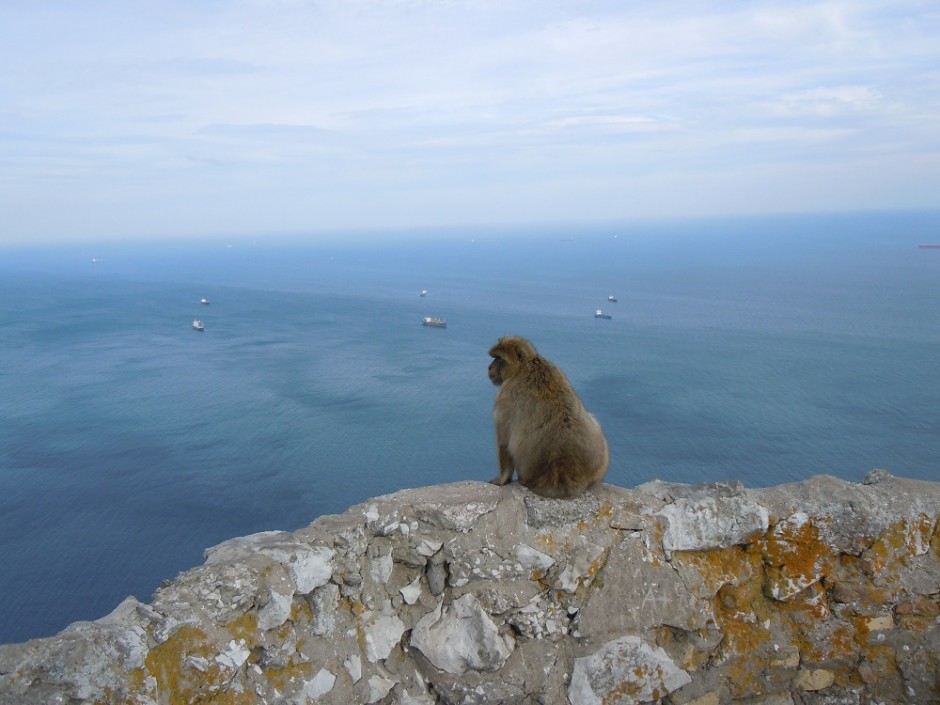 Monkeys never mind some alone time, especially on a sheer drop-off that would send them plunging hundreds of feet if they mis-stepped. In the distance, huge shipping boats, probably waiting to drop off fuel, drop anchor in the sea to avoid having to pay the mooring fee in the bay. 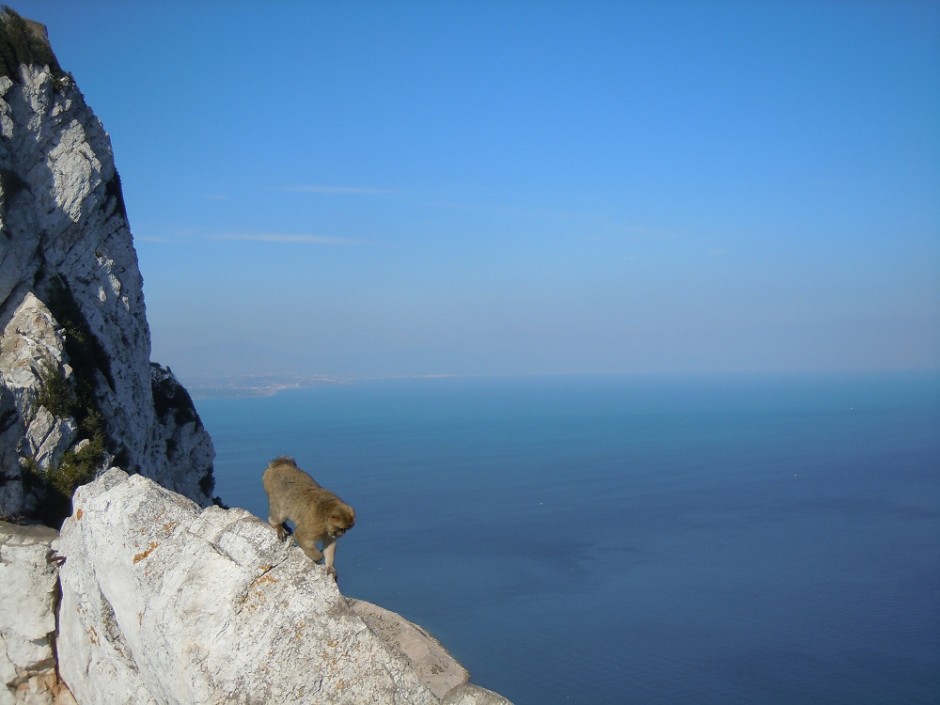 It's hard not to be impressed by the ballsiness of the monkeys around the top of the rock, hanging on by their feet just a few inches or a slip away from sudden death. I guess that's how "Survival of the Fittest" plays out in evolution, though. 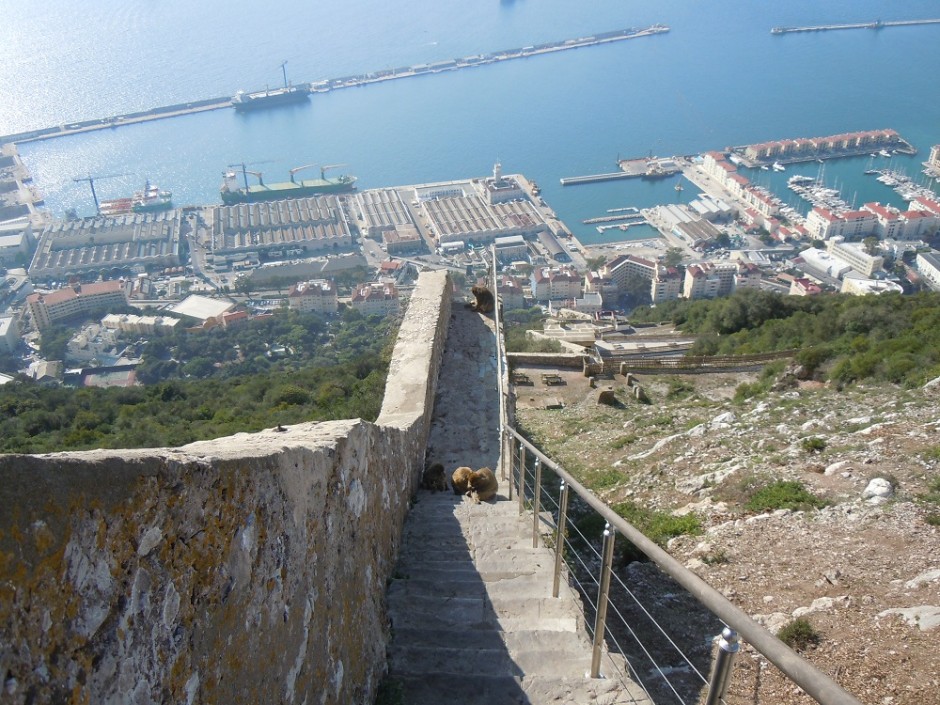 These stairs lead from the top of the rock all the way to the bottom, and are likely to be more difficult than if you came up through the Mediterannean steps, the trail that traverses up the nature preserve. You'll probably have to step over or around the monkeys, and seriously, use the rail, as the furry guys love to jump on your back while you're having a sudden moment of vertigo. 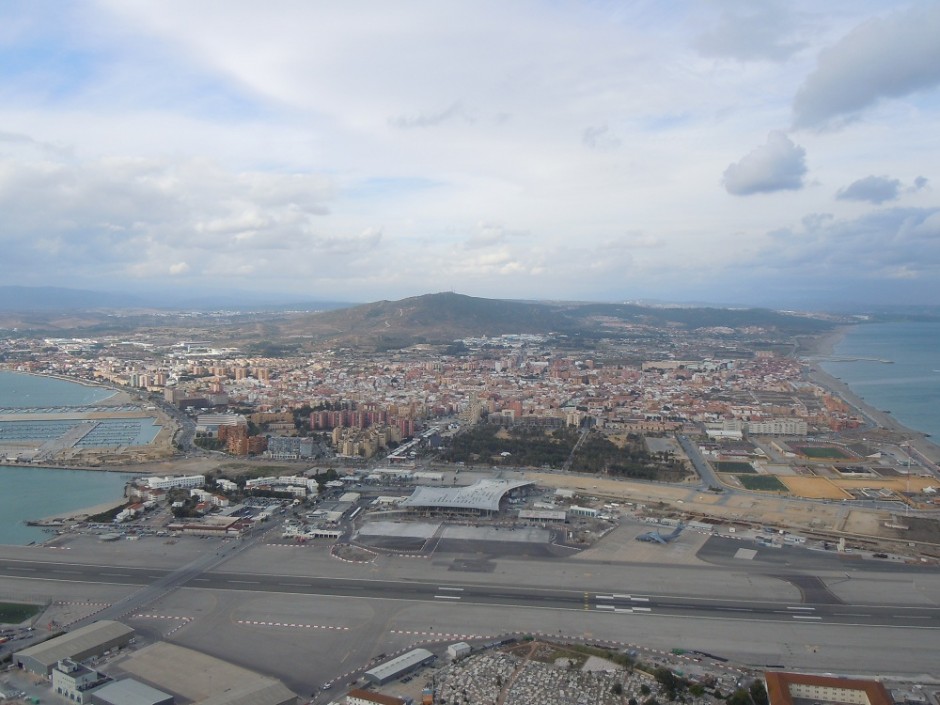 La Linea and the hills of San Roque, seen from a lookout on the Rock's northern face. From here, you can see it all: the Bay of Gibraltar on the left, the Mediterranean on the right, and the border and airstrip in the middle. Don't forget to wave at the planes as they land.