COLLECTIVELY, THE HIGHEST HILLS in Scotland are called Munros (named after the man who first catalogued them, Sir Hugh Munro). To be classified as a Munro, a hill must have an independent summit over 3,000ft high.

To climb all Scotland’s hills would take most folk a lifetime. A common goal for hillwalkers in Scotland is therefore to climb all 283 Munros and become ‘Munro Compleatists.’ To date, 4,973 people have done this (though I know of at least one person who is not on the ‘official’ list). Each of these people had the possibility of seeing the views shown in these photos, though the actual view they saw on the day would have been reliant on the weather they encountered.

Scotland’s mountains can be harsh, and it’s not uncommon for walkers to experience sun, rain, fog, wind, sleet, and snow, all on the same day, even in summer. It’s best to be prepared all year round and have the right skills, clothing, and equipment to get yourself up and down safely. 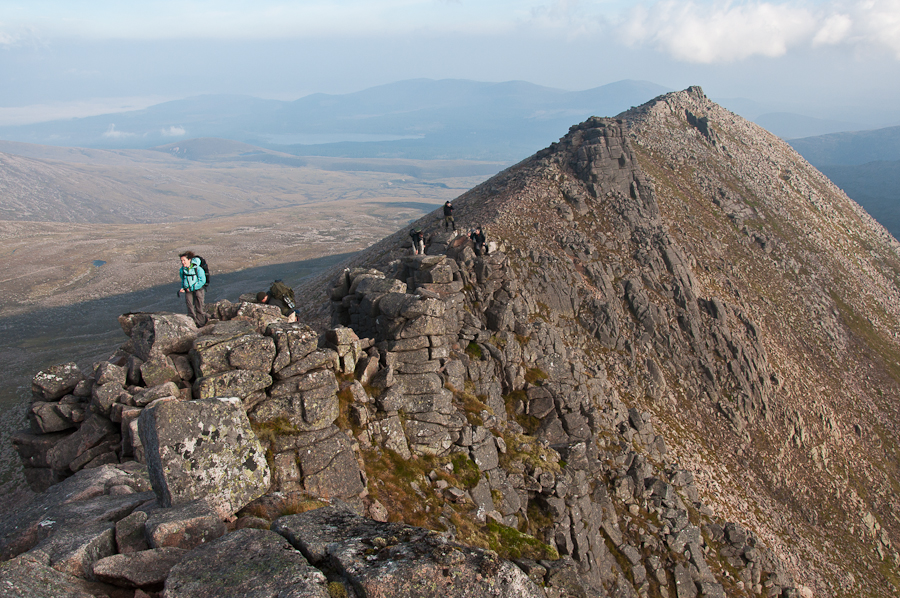 Scrambling in the Cairngorms

Scrambling is a popular pastime in the Scottish hills. This route, the Fiacaill Ridge in the Cairngorms National Park, East Scotland, is fairly easy. Graded 1 (out of 3), it follows large quartzite blocks along a narrow ridge and gives access to the 4,000 foot Munros on the Cairngorms plateau. 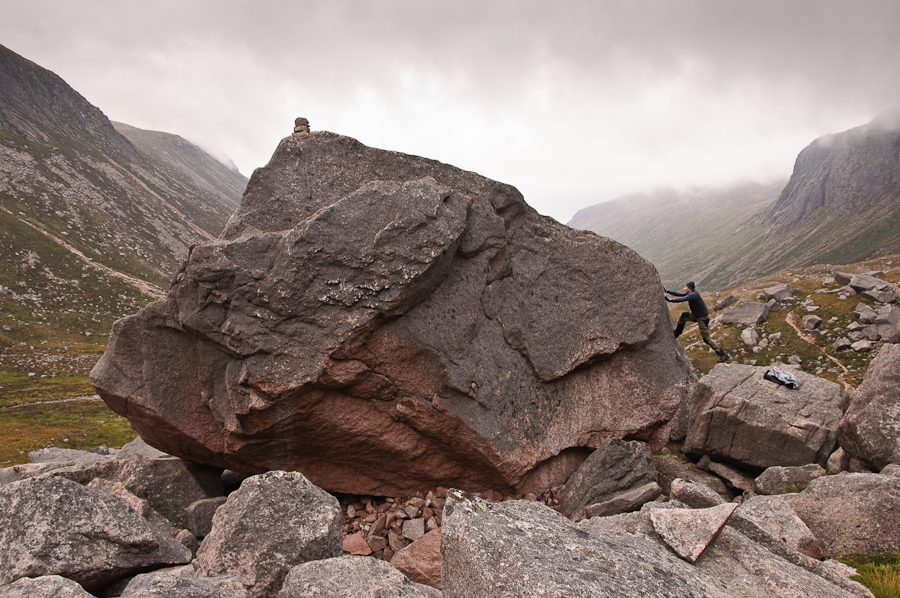 Playing around on the Shelter Stone

The Shelter Stone is a large erratic boulder at the head of the Loch A'n basin in Cairngorms National Park. It affords (very) basic sleeping accommodation underneath for a handful of people. Also termed a 'howff', the stone is often occupied by climbers, who use it as a base for playing on the nearby cliffs. 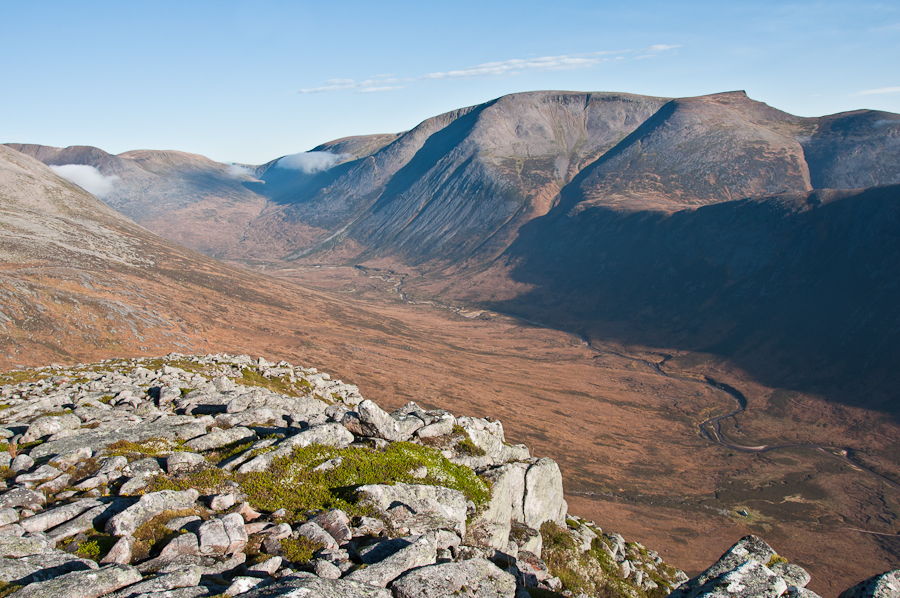 Looking down on the Lairig Ghru

The Lairig Ghru is a hill pass through a large U-shaped glacial valley. It separates five Munros; Ben Macdui and Carn a'Mhaim on one side and Devil's Point, Cairn Toul and Sgurr an Lochan Uaine on the other. This view, from the summit of Devil's Point, looks over to Ben Macdui. Below, in the depths of the Lairig Ghru, Corrour mountain bothy can be seen beside one of Scotland's finest rivers, the River Dee. 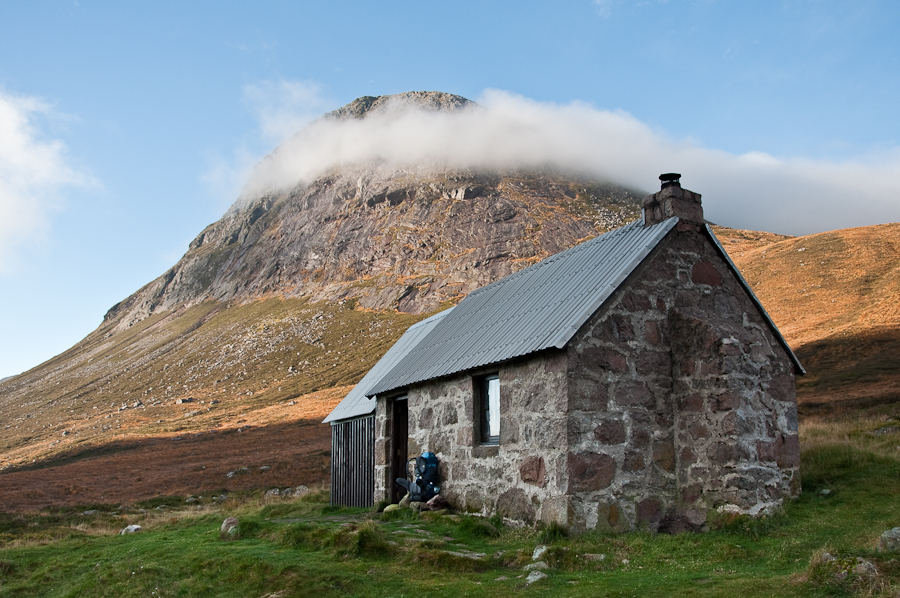 Looking up from Corrour bothy to the summit of the Munro, Devils' Point

Mountain bothies are unlocked shelters, often remote. They vary in quality and, if you're like me, your reaction to them changes depending how bad the weather is outside! Most bothies are managed on limited funds by the Mountain Bothy Association. Corrour bothy has been modernised slightly and has been kitted out with a compost toilet. 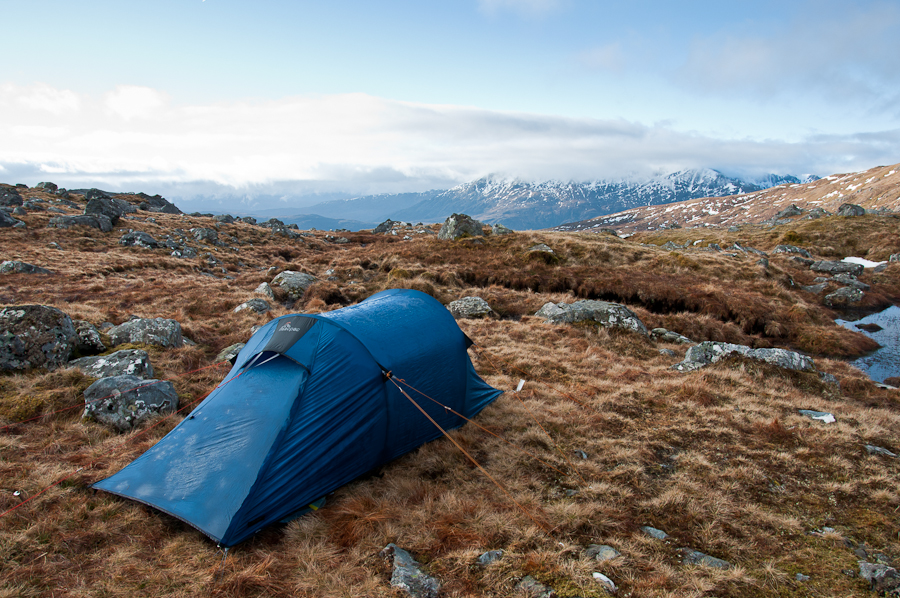 In Scotland, you can camp wild lawfully by following the Scottish Outdoor Access Code and adopting its 'leave no trace' policy. This campsite is 2,000 feet above the road in Glen Shiel in North West Scotland. It gives access to five Munros on the North Glen Shiel ridge - Mullach Fraoch-Choire, A'Chralaig, Sgurr nan Conbhairean, Sail Chaorainn, and Carn Ghluasaid. On the far horizon is the South Glen Shiel ridge. It holds seven more Munros, all with equally unpronounceable names. 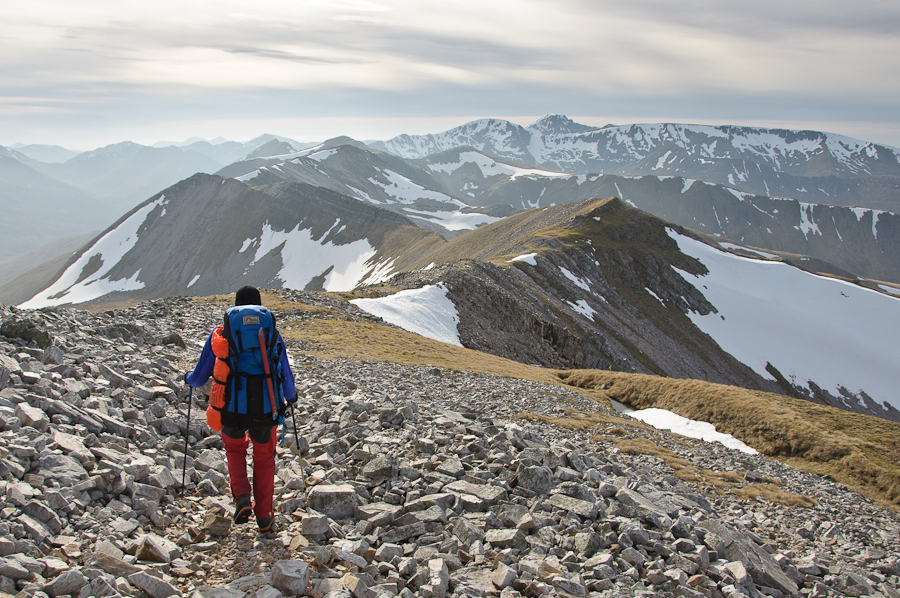 Starting out on the Lochaber traverse

Arguably Scotland's premier high-level backpacking trip, the Lochaber Traverse covers 12 miles, goes over 9 Munros (and six additional tops) and never dips below 2,100ft. It finishes on Britain's highest mountain, Ben Nevis, which can be seen just off centre on the horizon. For the fittest people, there is the option to continue the trip and take in all 24 Lochaber Munros. This latter trip covers a distance of 56 miles and climbs 28,500ft. It is called the Ramsay Round, after the runner Charlie Ramsay, who completed them in 1978, in under 24 hours! 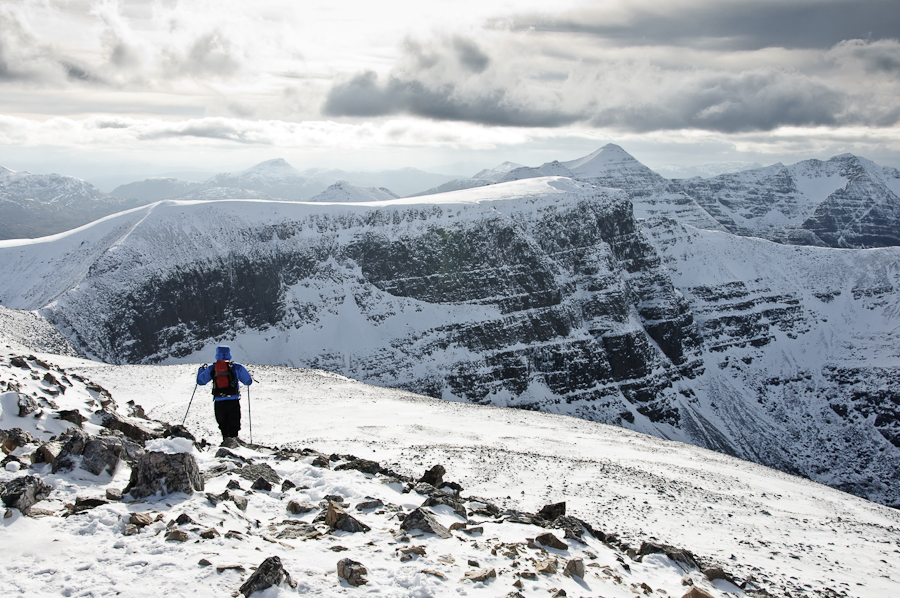 Walking off the summit of Beinn Eighe

From the summit of Beinn Eighe, a Munro in the North West Highlands of Scotland, you get a sideways view of 300m tall cliffs above Coire Mhic Fhearchair. Collectively called the 'Triple Buttresses', they hold some of Scotland's hardest winter climbs. In 1951, a Lancaster bomber plane, flying in poor visibility, crashed into the far right buttress. The resultant body recovery led to the formation of RAF Mountain Rescue. 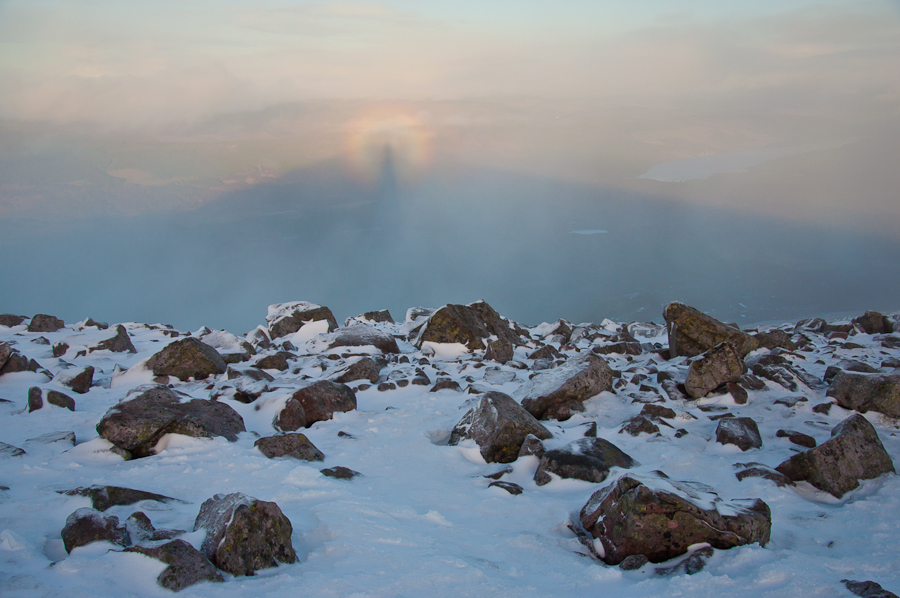 Creating a Brocken Spectre on Schiehallion

Brocken spectres are giant shadows cast by hillwalkers when they are positioned between the sun and distant clouds, fog, or mist. The sun projects the person's shadow onto the clouds and, through an optical illusion, magnifies it so it looks like you are a giant. In this example, you can also see the pyramid-like shadow of the Munro, Schiehallion. With such a distinct shape, the mountain can be easily recognised from many places in central Scotland. 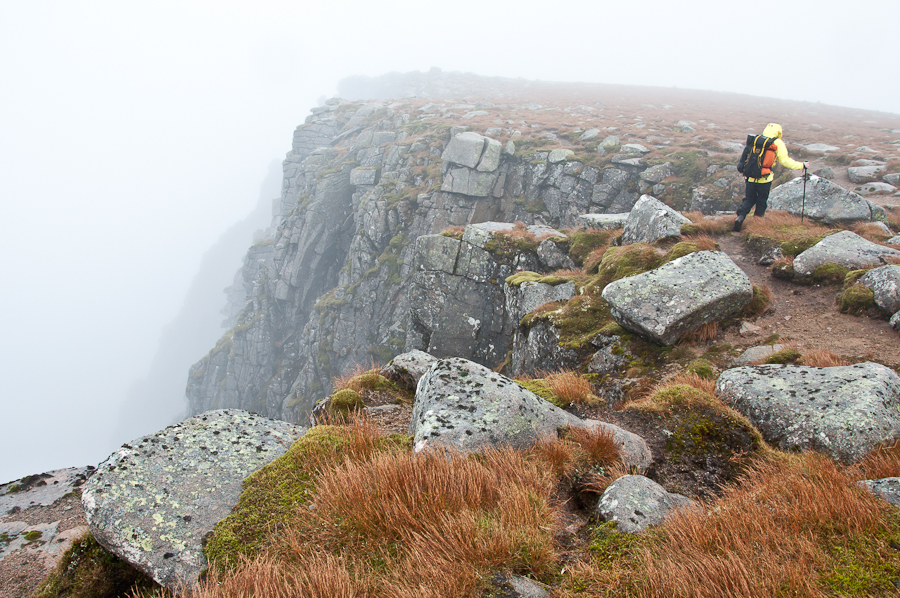 Walking along the cliff-tops of Lochnagar

Lochnagar is a Munro with royal connections. The mountain is located nearby Balmoral Castle, which is the summer home of the Queen of England. The Queen's first son, Prince Charles, has been known to climb the hill when the family is in residence. Here, a backpacker walks along the top of the Lochnagar cliffs. These cliffs, some 200m high, hold lots of summer and winter rock climbs. 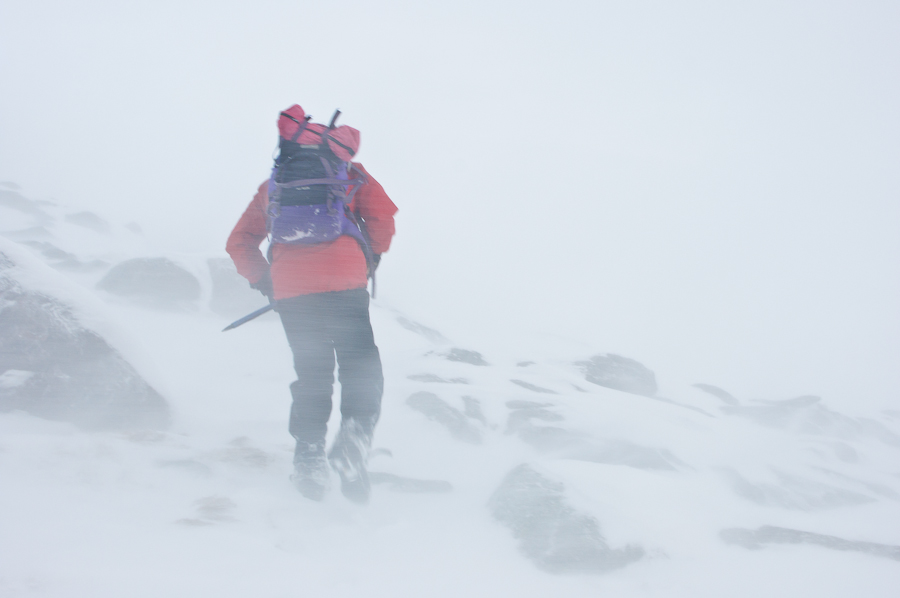 Hillwalking in Scotland is not without risk, especially in winter. The maritime climate commonly keeps temperatures just above freezing and causes what would be snow to turn into cold, wet sleet. Add in strong winds and sweat from exercise and, without you employing the right skills, clothing and equipment, you have the perfect recipe for hypothermia. 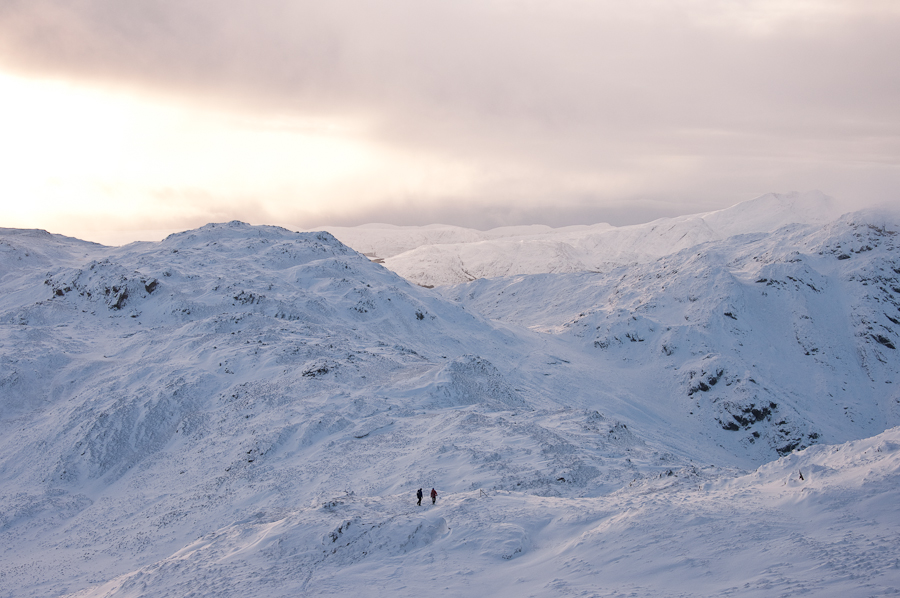 Descending from Ben Venue, a Graham in the South-East Highlands

Winter hillwalking in Scotland is not all about wind, sleet, and blizzards. When the weather's nice, Scotland's snow-covered hills are a fantastic place to be. Here, two walkers descend from Ben Venue as the sun begins to set and turn the landscape pink. Ben Venue is a Graham in the South-East Highlands of Scotland. The hill's name in Gaelic means 'small mountain', which proves you don't need to go up the highest hills in Scotland to get nice views. 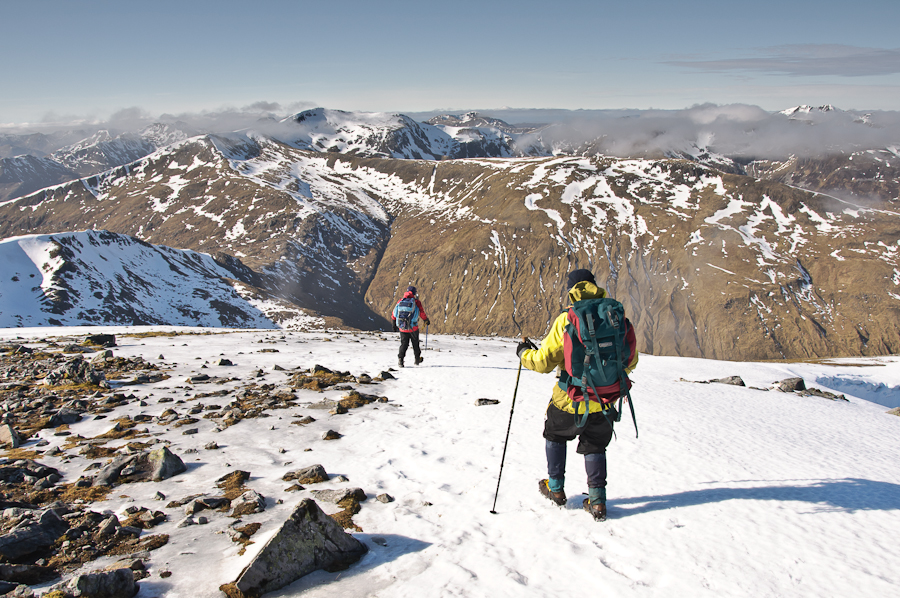 Up early for the best of the weather in Glen Shiel

Two hillwalkers descend from the summit of Sgurr nan Conbhairean, a Munro in the North-West Highlands of Scotland. The wild camp shown in picture 5 is in the middle left of the picture, at the right-hand end of the snow-covered ridge. Camping wild high up in places like this allows you to cover a lot of ground. If the forecast is good and you're up early, you can get the bulk of the day completed when the weather is best. 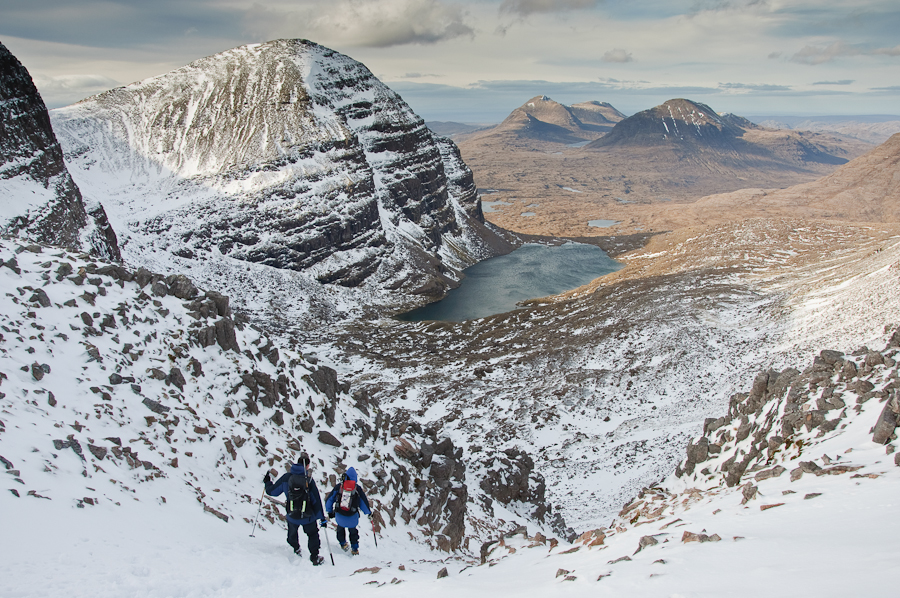 The far north-west of Scotland is characterised by lochs, moorland, and isolated hills. Here, two hillwalkers start their descent of Beinn Eighe, a Munro in the Torridon region. Beneath them, ripples can be seen on Loch Coire Mhich Fearchair, one of Scotland's most majestic mountain lochs. In the distance, over three miles away, are two Corbetts, Beinn an'Eoin and Baosbheinn. 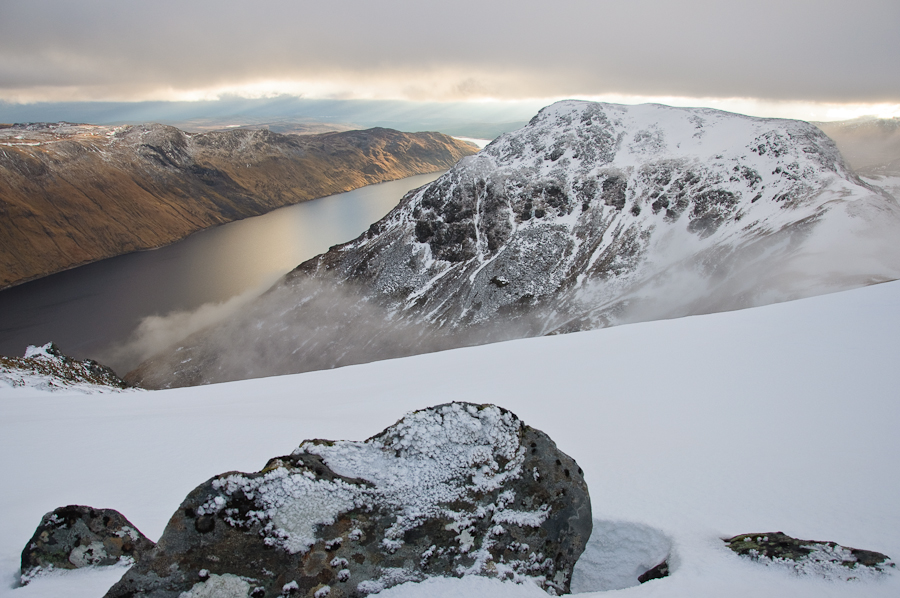 Loch Ericht is Scotland's 10th largest freshwater lake. This picture of the southern end of the loch was taken late on a winter's day from near the summit of the Munro, Bheinn Bheoil. Located in the Central Highlands, Bheinn Bheoil is one of Scotland's lesser known Munros. It is often overshadowed by its much larger neighbour, Ben Alder. Both hills are over nine miles from the nearest public road. 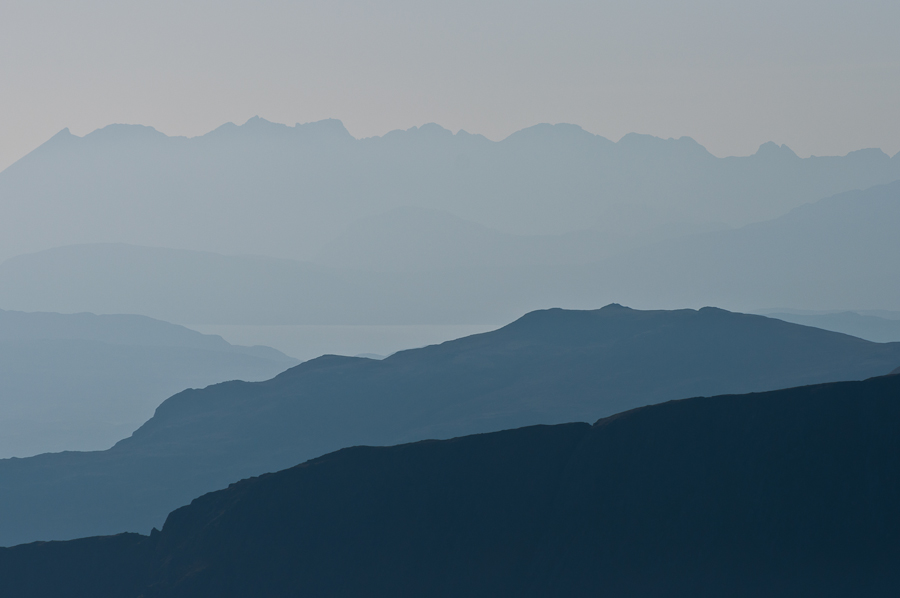 Dusk on the Cuillin Hills, Isle of Skye

The Isle of Skye's Black Cuillin hills are Scotland's answer to the European Alps. A true rocky mountain range, with pinnacled summits and huge drops, its 12 Munros are amongst the most demanding of 'ticks' for the Scottish hillwalker. (At least one summit warrants a climbing rope and many people hire a mountain guide to complete the tops.) The Cuillin hills were controversially put up for sale by a local landowner in 2000, with an opening price of $15 million. This caused an outcry and the hills were eventually taken off the market.

Tagged
Travel Scotland
What did you think of this story?
Meh
Good
Awesome