IN 1604, seventy-nine men sailed from France to St. Croix Island off the Atlantic coast of North America. After a winter so harsh that it killed half of them, the settlers moved inland and began to establish communities in the Maritime provinces of Canada (Nova Scotia, New Brunswick, and Prince Edward Island), and as far south as Maine. Over the course of the next one hundred years, England and France would struggle for control over the New World. Power would change hands at least ten times, shaping the political and cultural character of the area.

Four hundred years later, I arrived in a rented Chevy Cruze with a passive-aggressive GPS I called Barb. “Take a left at Rue Acadie,” she’d say stiffly, issuing the order just loudly enough that I’d know I’d been spoken to and that I’d have to turn down the radio and ask her to repeat herself. The only exception was when I’d pull over to take a photograph or a pee. Any deviation from Barb’s route and she’d bark “Recalculating! Recalculating!” in a voice I never had trouble hearing. 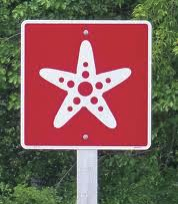 Tourism New Brunswick had supplied me with a rough itinerary — and, indeed, the car and Barb — and my job over five days in early August would be to learn about the history and culture of the Acadians.

There are two main routes running north-south along the eastern part of the province. Starting in Moncton at the south, drivers can speed up highway 126 to Miramichi, and then take 134 to Bathurst at the northern tip of the coast. On the way back down follow highway 11, the scenic coastal route. Follow the red signs with the sea star on them.

You could complete the Acadian Coastal Drive in one long day if you tried, but I recommend that you give yourself more time. You’ll have to get yourself a headstrong GPS to point you down some strange back roads if you want to replicate my trip.

[Editor’s note: All photos below by author.]

Once in the Maritimes, the settlers did what settlers do: They built forts and farms, and got to know the locals (in this case, the Mi’kmaq and the Maliseet First Nations).

The Village Historique Acadien is a functioning Acadian village designed to replicate life in the 1700s (and then the 1800s and 1900s as you walk your way towards L’ Hôtel Château Albert). If you’ve ever wondered how a blacksmith makes a nail, how to pump water from a well, or what a root cellar is, this is the place to find out. Located just outside Caraquet on highway 11.

When the British defeated France for the last time in 1755, they required of the Acadians unconditional allegiance to the British Crown. The Acadians refused and the British, under Commander Charles Lawrence, began what would be known as the Great Deportation. In the eight years between 1755 and 1763, an estimated 15,000 Acadians were deported and approximately half of them died, mostly from disease or drowning.

Some Acadians were sent back to France, some were sent to the place we now know as Louisiana (where they were accepted by the ruling Spaniards who were also Catholics; these immigrants became known as Cajuns), and some died at sea.

In the weeks leading up to the Acadian Cultural Festival, people decorate their properties to remember those lost and to celebrate their heritage. The most common displays that I saw were sailors, boats and lobster, and Evangeline and Gabriel, characters from a Longfellow poem titled, Evangeline, A Tale of Acadie, published in 1847. Set during the Great Deportation, the epic poem follows Evangeline, an Acadian, as she searches for her lost love.

After the deportation, the British commanded a sloop from Pennsylvania. On board there were seven German families (Stief, Lutz, Trietz, Wortman, Koppel, Rickard, and Somner) and the Jones’, a Welsh family. They’d been promised free land in exchange for settling the area under the British Crown.

Some families took this directive more seriously than others. Heinrich and Rachel Stief had seven sons, who are the direct ancestors of an estimated 150,000 people. Today, numerous area businesses are called Steeves, the Anglicization of Stief.

The gold lion in the New Brunswick flag represents the area’s ties to the Brunswick (Braunschweig) region in Germany.

In the 1770s, the British began allowing displaced French to come back to New Brunswick. Those who returned were marginalized, relegated to low-paying jobs, and disallowed from using their language in places of work.

The Acadians held their first National Convention in 1881 at Memramcook, New Brunswick, where they discussed religion, language, industry, trade, and politics. They also chose August 15 — the day of the Feast of the Assumption of the Virgin Mary — as their national holiday.

In 1884, at the second Acadian National Convention, Father Marcel-François Richard presented the new Acadian flag. Sewn by Marie Babineau, the flag is the French Republic’s tricolore, with a yellow star in the blue stripe. The star is a symbol of the Acadians’ Catholicism (yellow is the color of the Papacy), and of Mary, and the star represents the north star which is significant to mariners in guiding their way home.

This house is on highway 11, east of Bathurst.

During my first New Brunswick lobster experience I was the guest of Ana-Marie Weir, the owner of Roads to Sea Guided Tours who taught me the very particular New Brunswicker way to eat lobster.

Currently, lobster is an expensive luxury meat, but it wasn’t always so. “We used to get sent to school with lobster sandwiches,” Anna-Marie told me as we drove her white work van out of Moncton in the spattering rain. “I’d scrape the lobster off before I got there. Can you imagine that?”

As bottom-feeders, lobsters were plentiful and cheap — poor peoples’ food — so kids with lobster sandwiches would jockey for a bologna trade.

The main reason for the shift in attitude? “The oceans started getting over-fished, and prices went up,” Anna-Marie explained.

6. The Hopewell Rocks, Bay of Fundy

One hundred billion tonnes of water flow into the Bay of Fundy twice every day, causing the highest tides in the world to occur at the Hopewell Rocks. When the tide is out, visitors can walk along the sand — literally on the ocean floor — but they should pay attention to the tide tables. High tide can reach up to 46 feet. The Hopewell Rocks are a 45-minute drive from Moncton.

Barns and outbuildings are common along the highway 11 coastal drive. The tools hung on the wall of this building caught my eye.

This is Dyane and she’s one pissed off fishmonger.

Construction is blocking both entrances to her stand in Miramichi. How’s she supposed to get drive-by customers with all this? Then four days ago, kids burned down her trailer, and you can bet it’s coming out of her pocket. No insurance. She’ll put the salt and pepper out on that little ledge so you can reach it, but only because you were polite. The sea air makes it clumpy.

Located on a natural island in Bouctouche, Le Pays de la Sagouine is a replica of the town in La Sagouine (The Washerwoman), a novel by celebrated Acadian author Antonine Maillet.

Live actors play the book’s characters, making Le Pays de la Sagouine the Acadian cousin of Disneyland’s Main Street, USA. Enter one building to hear a hilariously ribald monologue, another to engage in a cooking class, and a third to have a drink. If he’s got his cards on him, the fellow in the lighthouse will tell your fortune. Make sure you don’t get too close to the grass — locals call it “herbs aux peuces”: flea grass.

The oldest operating wooden lighthouse in New Brunswick is at the tip of Miscou, an island off the east coast of the province. Famed Acadian singer Sandra LeCouteur grew up here; her father was the lighthouse keeper.

More than 13 million bales of peat moss are produced annually in New Brunswick, making it one of the most important exports in the region.

Like deciduous forests, the bogs in New Brunswick turn shades of orange and crimson in the autumn. Though it was too early for the colors, the postcards I saw at the Miscou Lighthouse gift shop convinced me to pull over for a walk.

I was only there for a few moments before the mosquitoes cottoned onto my pong and gave chase, but it was long enough to take this photo of the flutes that grow in the bogs. Look inside: each is full of rainwater.

Pumphouse is a Moncton brewery, opened in 1999 by New Brunswicker fireman Shaun Fraser. Though it offers a complete palette for the beer connoisseur (ask for their beer flight at the Moncton restaurant and you get ten samples), the microbrewery is most famous for their Blueberry Ale. Once pulled, the server drops a tablespoon of fresh local berries into your draught.

Summer mornings in New Brunswick are often foggy, reason enough to get up to take photos. As I was speeding past on my way to Miscou, I saw this stand of ships and pulled over. I had to pull a U-turn which made Barb raise her voice, but it was totally worth it.

14. The politics of lobster, Miscou

During my time in the province, the New Brunswick lobster industry was dealing with a labour dispute. Maine trappers (who enjoy an earlier season opener) had flooded the Canadian market with their surplus haul, driving prices down. Adding insult to injury, the American lobsters are soft-shelled (a difference caused by warmer seawater) — a trait said to make them inferior. The government ended up subsidizing to a minimum price, but it wasn’t enough to subsist according to many trappers.

Though popular opinion seemed to side with the lobster fishers, not everyone was sympathetic. “If I don’t make enough money, I don’t get money from the government,” a local hotelier griped. “Those lobstermen need to adjust with the times.”

Tourism New Brunswick made reservations for me at Hotel Paulin, an historic building in Caraquet which is where many of the Festival events take place. The inn’s proprietor, Gerard, is the third Paulin to own and operate the business. His grandfather bought it from the original owner who built it in 1891.

On the day of the tintamarre, several of the guests and their visiting family members went to the celebrations together.

Although I asked almost everybody I met exactly what the tintatmarre is, the best answer I got was “a party with lots of noise and every kind of pot and pan.” The word comes from Acadian French, meaning “din”, and it’s a gathering of people dressed in the colors of the flag with horns, drums, and pots and pans.

17. The history of the tintamarre

Every August 15 at exactly 5:55pm (17:55 on the 24 hour clock, in remembrance of the year the Great Deportation began) those gathered begin to make as much noise as possible. The demonstration is both celebratory and political — it’s a reminder of the presence of Acadians in New Brunswick.

A quiet stretch of highway 11 between Bathurst and Caraquet.

Saskatchewan’s got a giant coffee pot, Alberta has an oversized perogie, and Shediac, New Brunswick, is home to the world’s largest lobster. Even the inclement weather didn’t dampen the enthusiasm of the busload of tourists lined up to get a picture.

A heron overlooks the Lameque marina where a ship is docked.