IT REALLY ISN’T like me to go on a guided tour. But for the average adventurer to experience a week in the wildness of the Alaska Panhandle as I recently did, there probably isn’t a better way to go about it.

Southeast Alaska, that sliver of the American state that may as well be part of British Columbia, is riddled with islands; most of the area is inaccessible by road — air and water is the preferred method of transport. As my partner and I descended into Juneau, I was taken aback by the wild landscape and the enormous scale. And I live in the mountains of BC. What struck me the most was the lack of evidence of human activity. I didn’t see clearcuts; I didn’t see logging roads. I just saw hordes and hordes of trees and mountains and valleys. Untouched.

While I was there as a media invite, hosted by Un-Cruise Adventures, I was sort of a secret shopper. Neither the staff nor guests on the boat knew my status, and I was able to experience the trip as everyone else (this cannot be said of most press trips). The way I was treated during meals and activities like hiking, kayaking, standup paddleboarding, and even polar plunging, was how all the other guests were treated. And we had the time of our lives.

We boarded the boat (24 other passengers and I) in Juneau and made our way south, meandering through islands, exploring coves and bays. Skiffs (small motorboats) brought us to shore for hikes and to get closer to glaciers. The staff was always on the lookout for wildlife, pointing out anything of interest and offering knowledge of the area. The guides (one of which has summited Everest) were on-point and gave interpretive talks, explaining the region and the life within it.

Alaska is more than twice the size of Texas, and we explored just a tiny fraction of it. I can’t wait to go back.

* Carlo was a guest of Un-Cruise Adventures on their Inner Reaches Eastern Coves tour. All photos by author, except where noted. 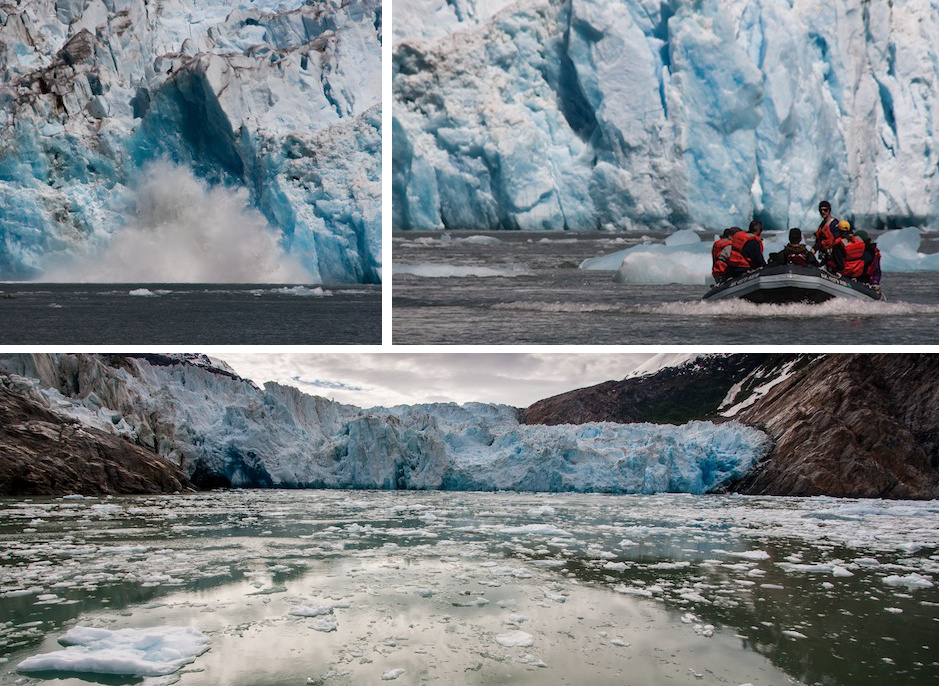 My assumption was that you'd have to be extremely lucky to see a glacier calve. Not so on this day. The Sawyer Glacier in Tracy Arm is a tidewater glacier - meaning its terminus is at the ocean - and was very active when we visited; we saw four or five calvings. The main vessel anchored a ways back, and we loaded into skiffs that brought us closer (up to a quarter mile away). Just before I got into my skiff, we heard a loud, thunderous cracking and saw a massive piece of ice break away (one of the guides said it was the biggest she'd seen there) and crash into the ocean. In the skiff, on our way toward the glacier, the resulting waves bobbed us up and down.

Press play to listen to the glacier calve (turn up your speakers): 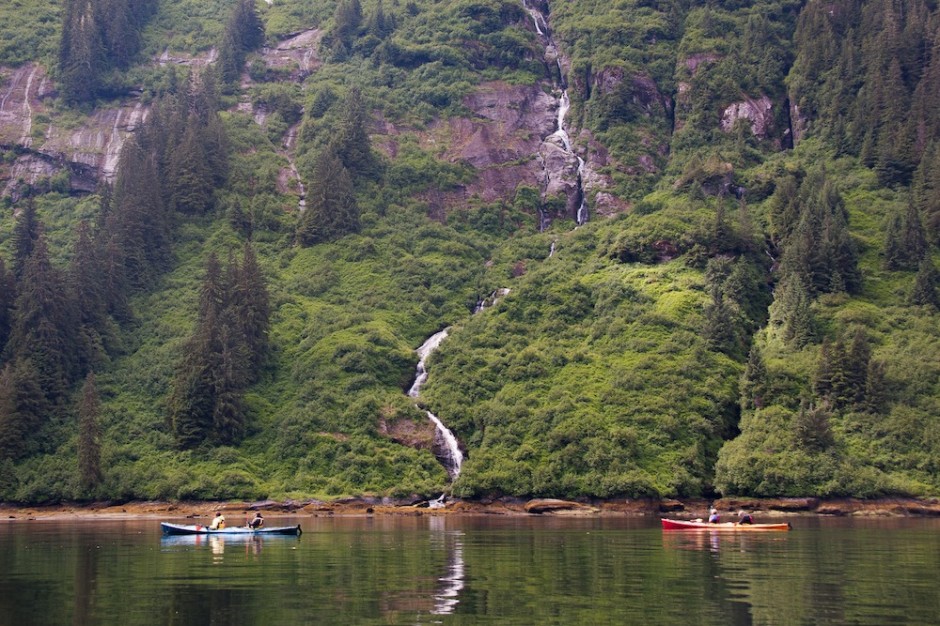 The entire week in Southeast Alaska was abnormally sunny. While we were all very appreciative of the great weather, part of me did wish for some moody clouds and mysterious mist, especially in Misty Fjords. There was a slight fog early in the morning, but by the time we got out in the kayaks it had burned away and was mostly clear. 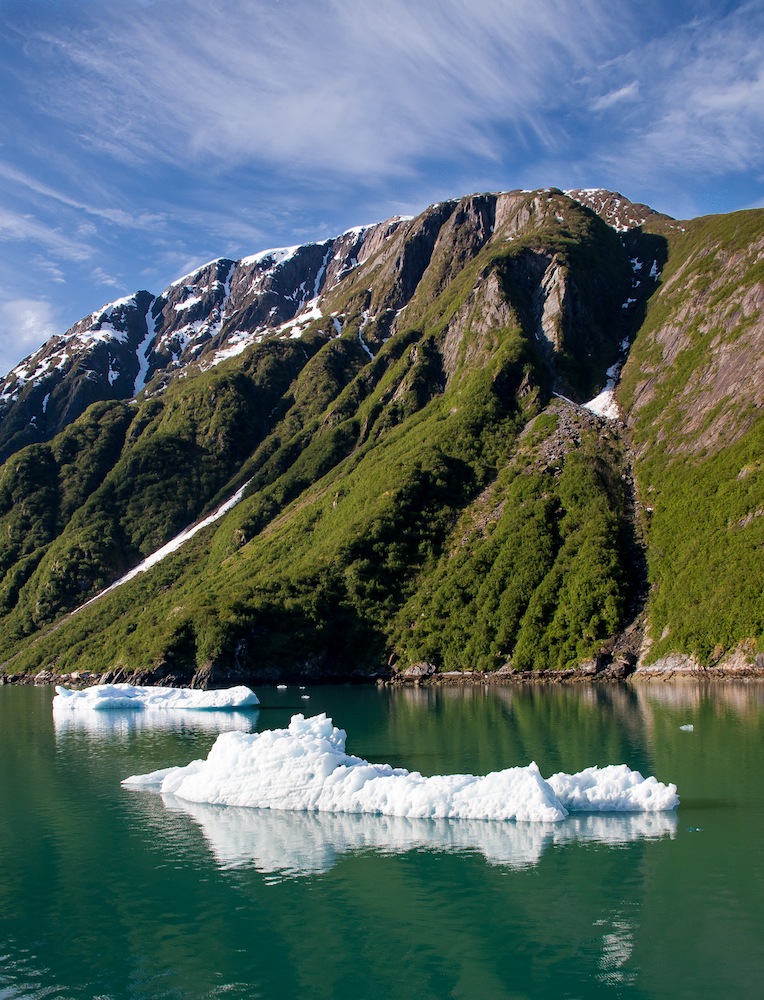 I believe the first words out of my mouth the morning I woke and peeked out the cabin window to see floating ice was, "Whoa!!" I was giddy. We were on our way to the first glacier of the trip, the twin Sawyer Glaciers in Tracy Arm.

If you're curious what it sounds like when a skiff crashes through floating ice, press play: 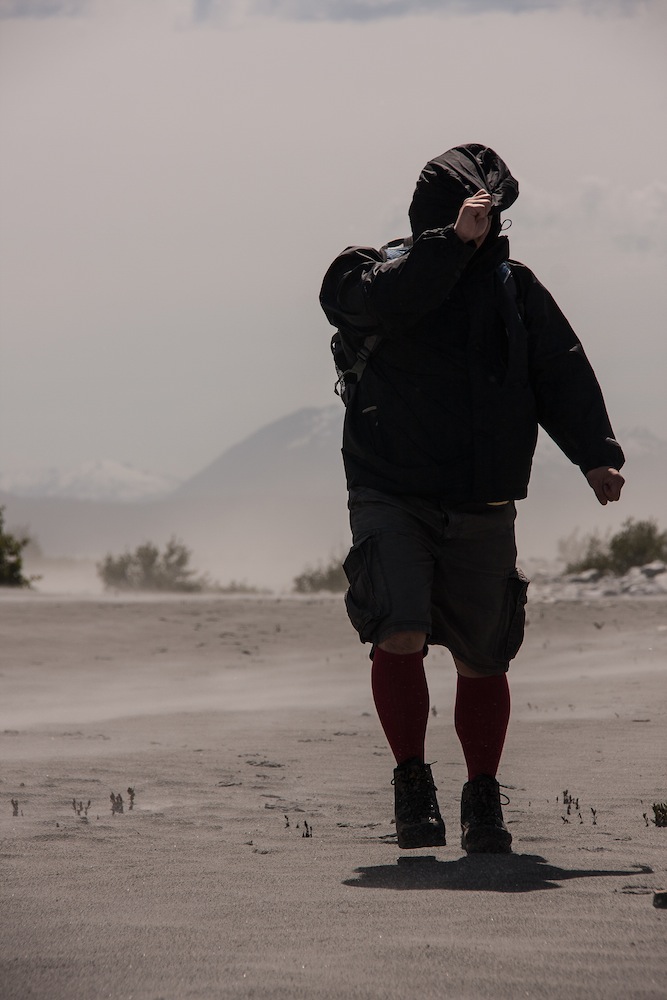 One thing I loved about the trip was that nature ruled the day. No matter what our itinerary said, it was up to Mother Nature what we did and when we did it. Our first attempt to land on the beach for a hike to Baird Glacier was nixed when we discovered the tide was too low. We returned to the main boat and waited a few hours to try again. (We "waited" by going kayaking.) By that time a dust storm had kicked up on the beach we landed at, driving fine sand into our faces and mouths as we walked toward the glacier. 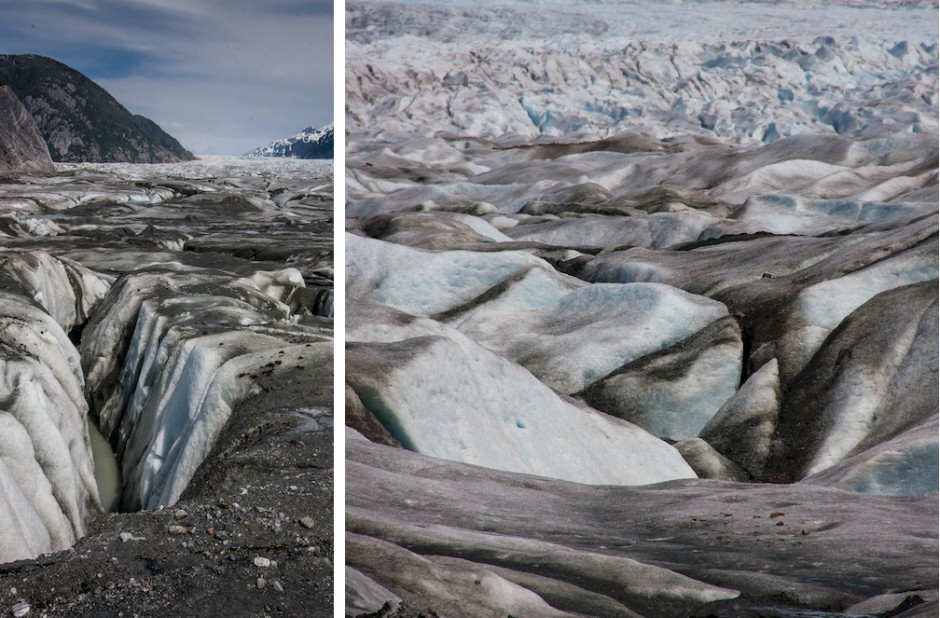 A testament to how fast glacial landscapes change was this side trip to Baird Glacier. Just a couple of years ago, Un-Cruise was able to take adventurers right onto the glacier within a couple of hours. On this trip we walked on Baird's terminal moraine, the "dirty" part of the glacier. We were reminded of what we were on when slick pieces of ice revealed themselves beneath the caked-on silt, and by crevices like these that extended toward the glacier. The large lakes and crevices that had formed made it impossible to reach the "clean" part without hiking for several more hours. 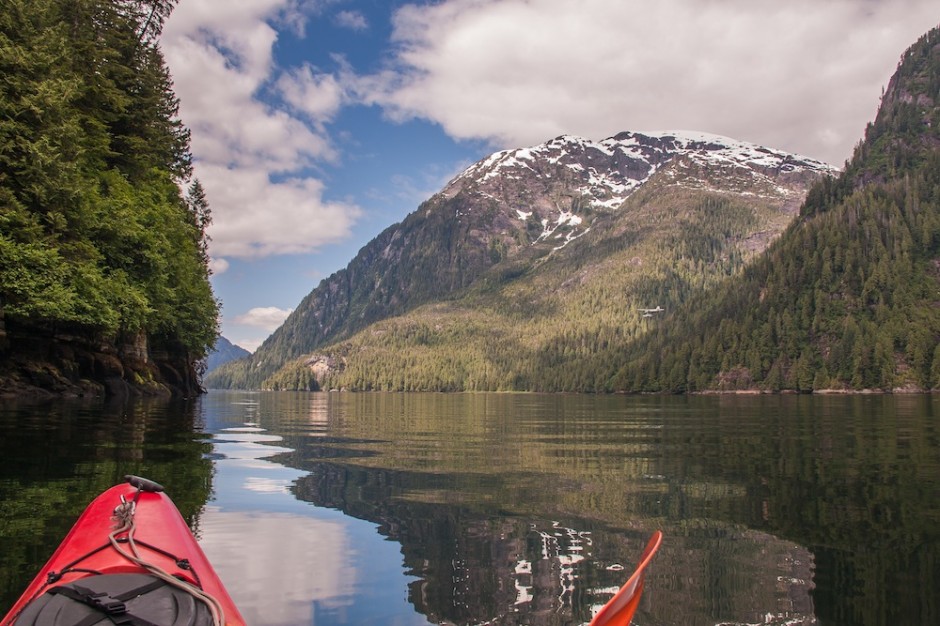 Being in the Inside Passage of Southeast Alaska, we were protected by plenty of islands, making kayaking and standup paddleboarding quite comfortable and smooth (and very scenic). Note the float plane coming in for a landing - doesn't get much more Alaska than this! 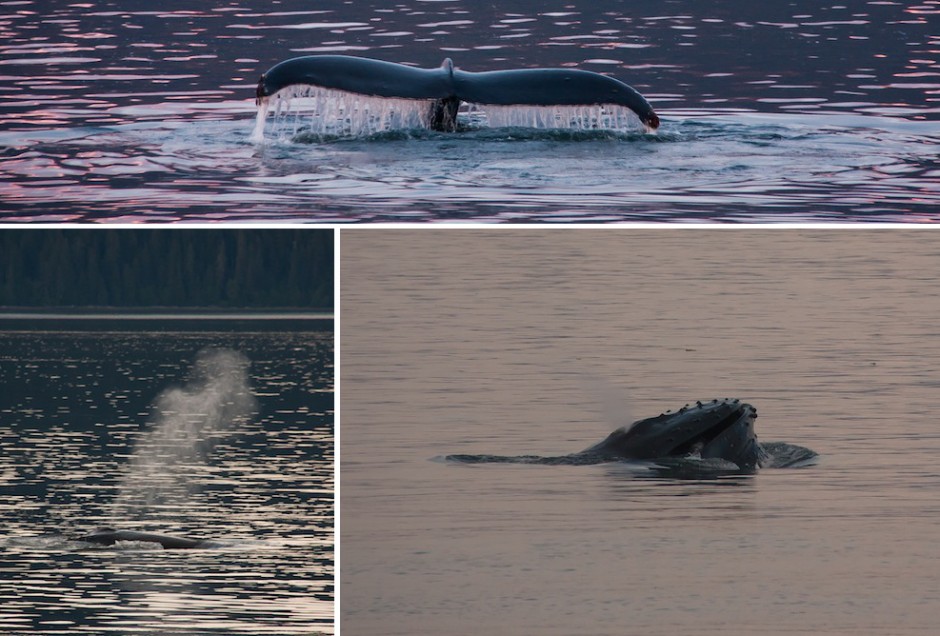 On our first night out of Juneau the captain spotted a couple of whales feeding. He slowed the boat right down and we watched. While we saw plenty of whales on the trip, none breached in the dramatic fashion seen in some photos, jumping out of the ocean and splashing on their backs. But capturing such a shot became secondary to just viewing and appreciating these animals. 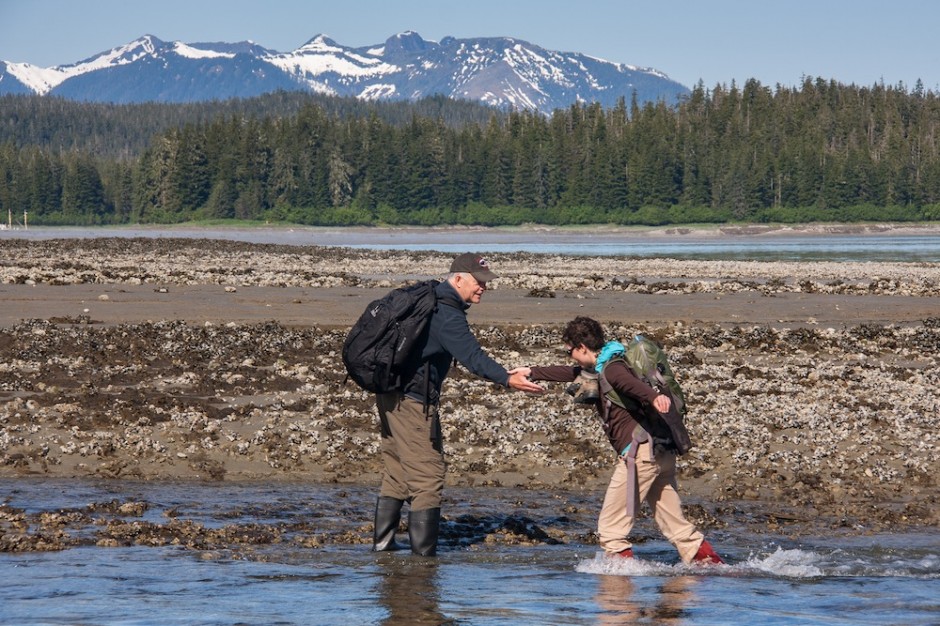 Our 12-mile hike to Patterson Lake didn't start out as planned. Due to the tide, we were dropped off on the wrong side of a creek. We had to grin and bear it as we slogged through frigid water that went above the tops of our gum boots. On the other side we poured the water out of our rubber boots, dried off, switched to hiking boots, and headed into the forest. 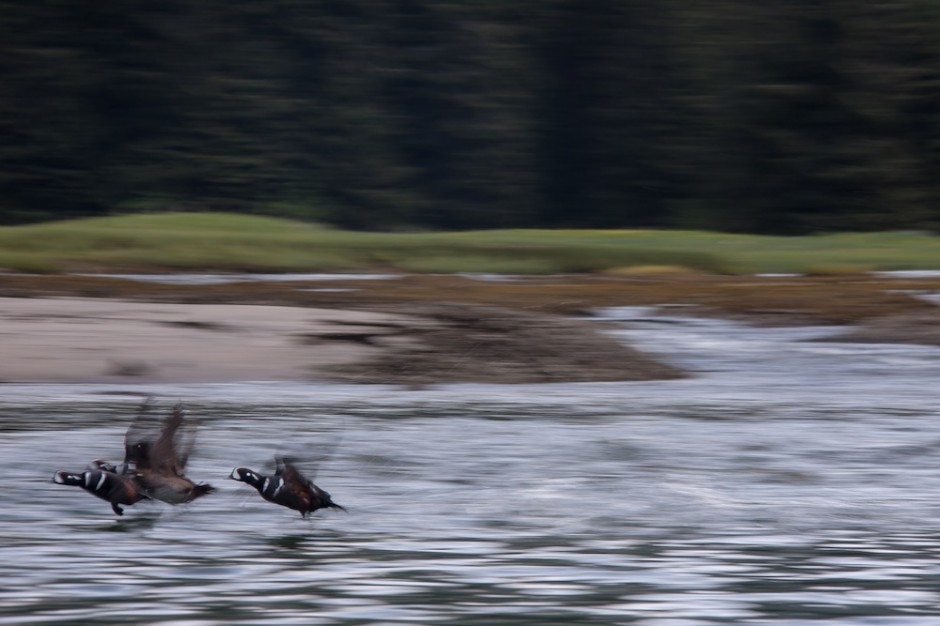 These Harlequin ducks took to the air as soon as our kayak got a little too close. I was waiting with my camera. 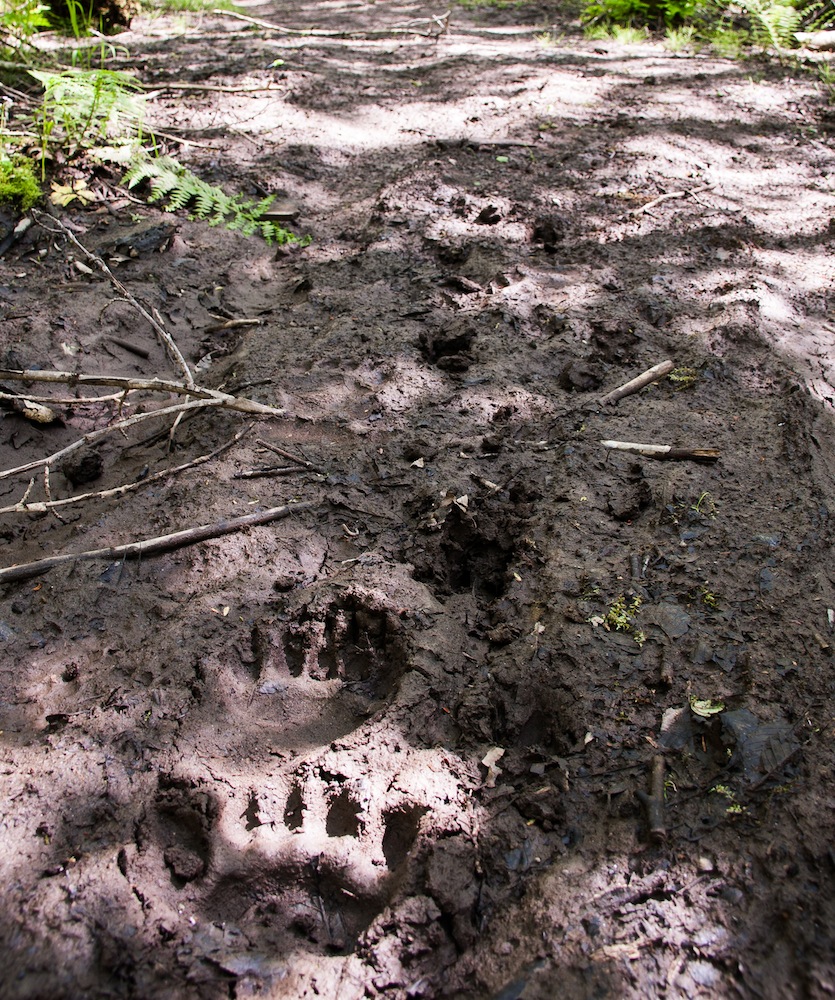 Bear, moose, deer, and wolf tracks were common sightings on our hikes. We were taught that brown bears' toes are straighter across than black bears, which are more arced. Brown or black, we weren't taking any chances and made sure to make a lot of noise as we trekked along.

These brown bears were spotted near a beach in Misty Fjords National Monument. Southeast Alaska is home to one of the highest concentrations of brown bears in the world. On Admiralty Island, there is an average of one per square mile. Put another way, there are three bears for every human inhabitant!
Photo by Chris Fleck. 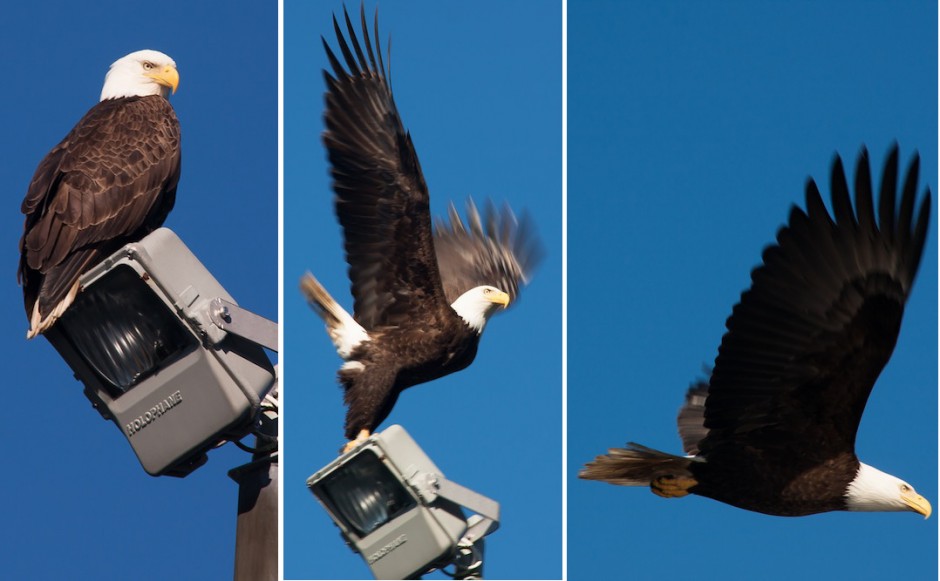 Bald eagles are somewhat common in my neck of the woods in British Columbia, but every one is as majestic as the last and I never tire of seeing them. I snapped this one just as we docked in Ketchikan (our final destination) and was fortunate to catch it as it took off. 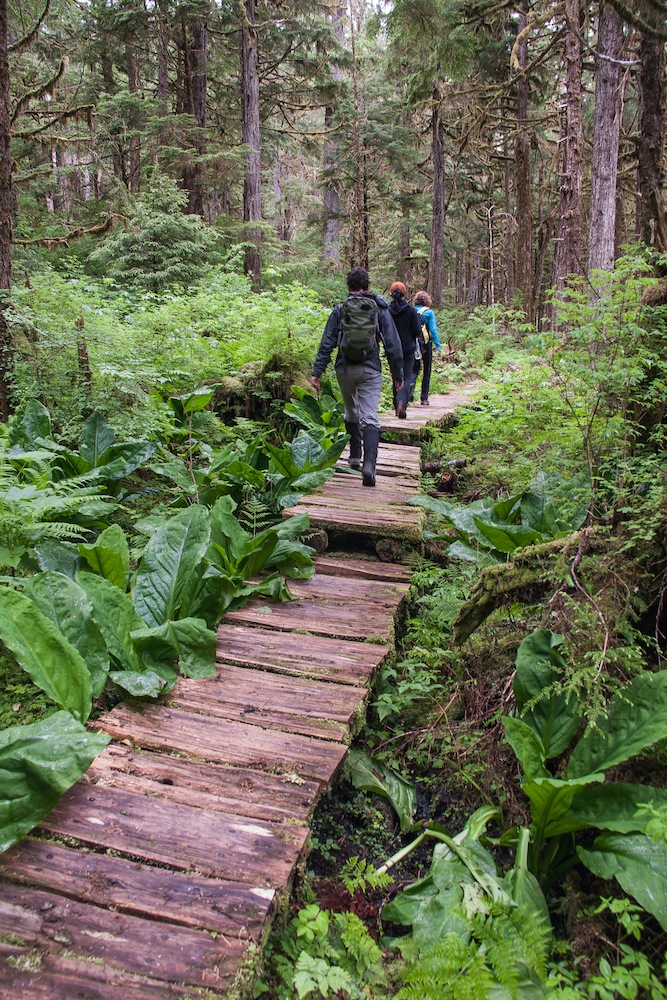 This hike, which started at the Yes Bay Lodge (a fishing lodge), ran along Wolverine Creek. The big leafy plants pictured here are skunk cabbage. Bears coming out of hibernation snack on these, which act as a sort of laxative to clean out the bears' system. It's thought that the hardy yellow flower - which can bloom through snow - is what awakens bears from hibernation. (Note: It's not typical for trails to have boardwalks; most aren't even maintained.) 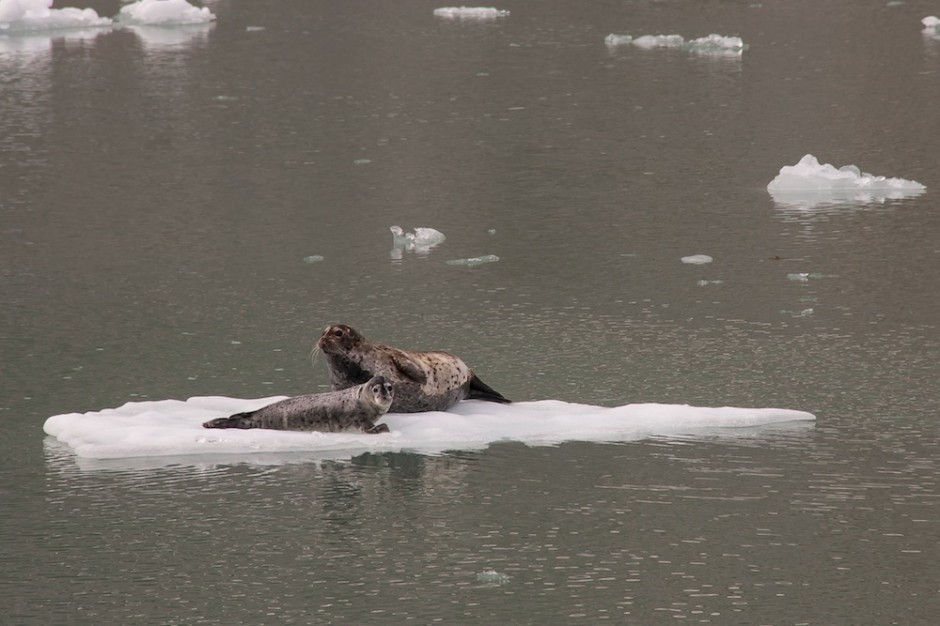 As we made our way toward Sawyer Glacier on day 2, we passed through fields of floating ice, many of them occupied by seals. When the mother takes to the water, the little seal pup hitches a ride on mom. 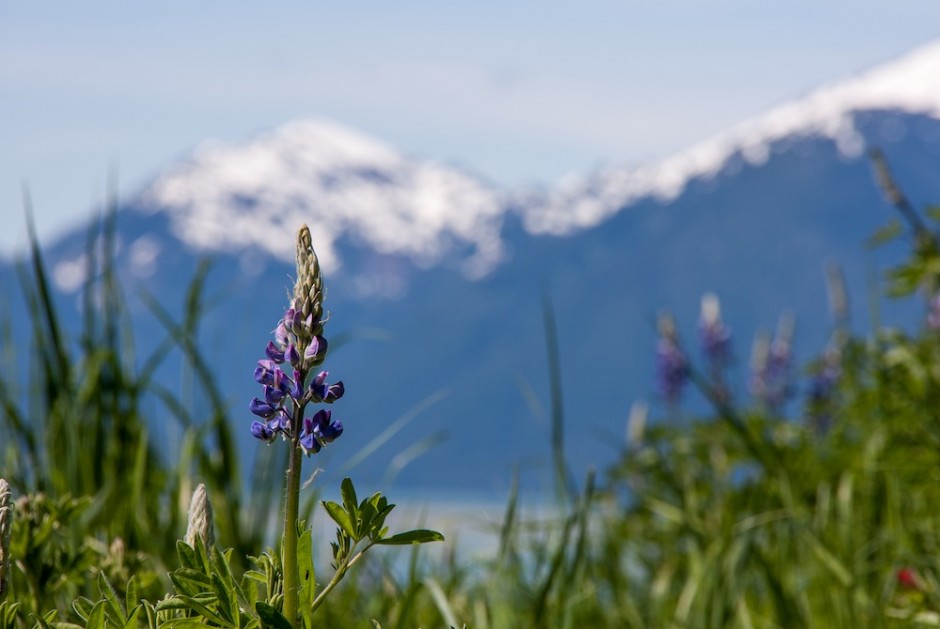 There is no shortage of wildflowers in Southeast Alaska, many of which are bigger than back home. This would be due to, I'm guessing, the longer daylight hours the area gets. Near the summer solstice, we were seeing over 18 hours of daylight. 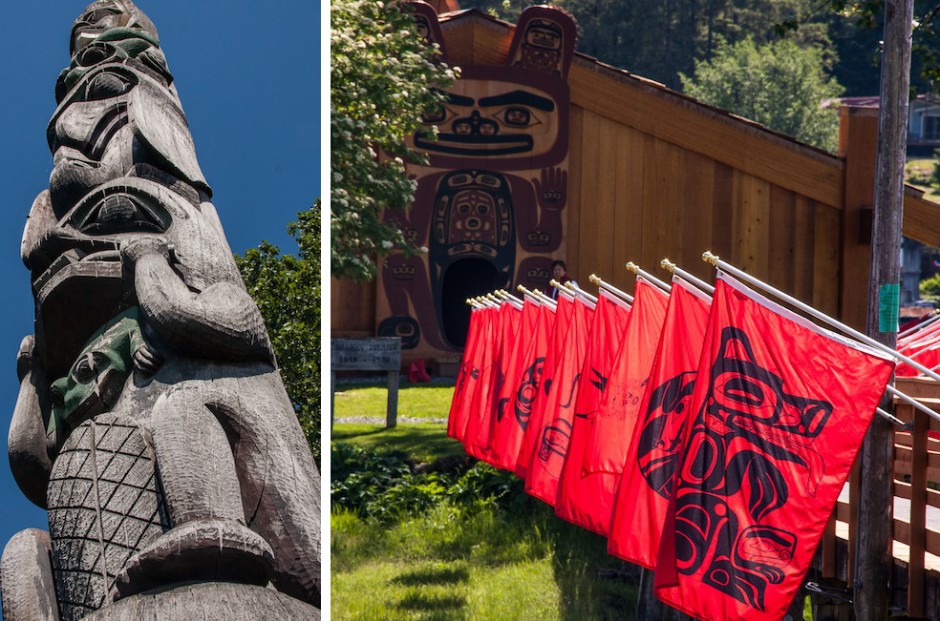 In Wrangell, a town of around 2,300, we were invited to learn about the Tlingit people's culture at Chief Shakes Tribal House. The structure was newly rebuilt, with each plank and beam hand-carved with an adze. Inside the house they sang and danced to traditional songs.

Press play to listen to the song we were welcomed with: 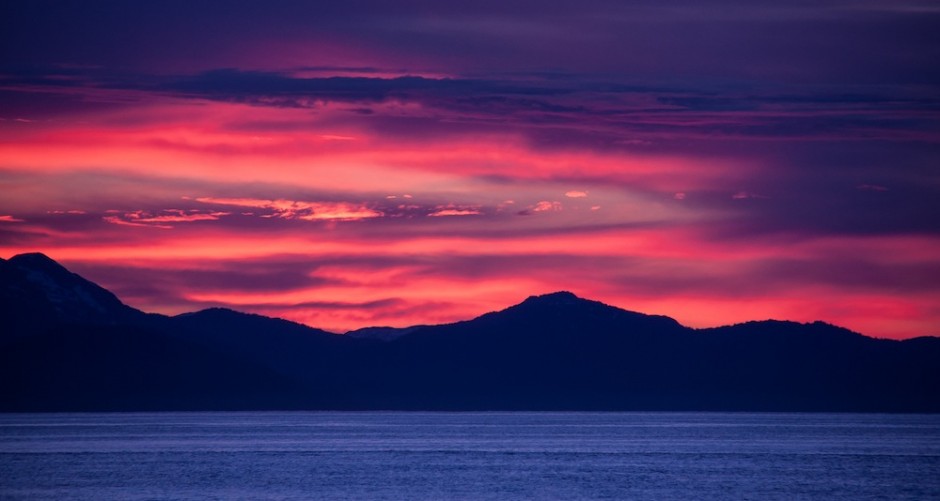 I promised myself, no more sunset shots! But each night was different: different landscape, different colours. There was no way I couldn't snap a few shots and share them. 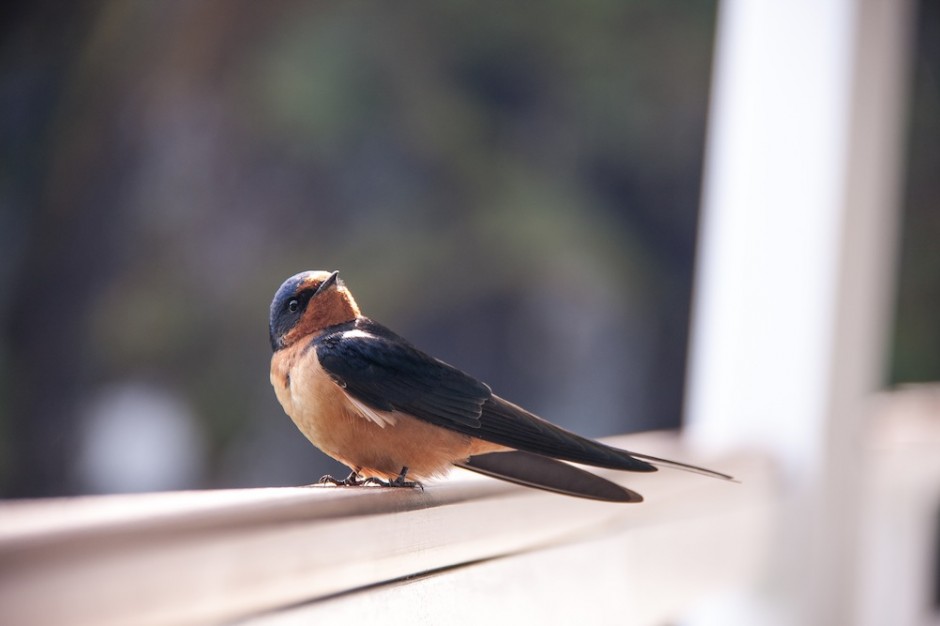 These little guys flit around like bats. Two of them were playing around the boat while we were anchored, and I managed to get just a few feet from this one. There is a lot to see for bird lovers in Southeast Alaska. 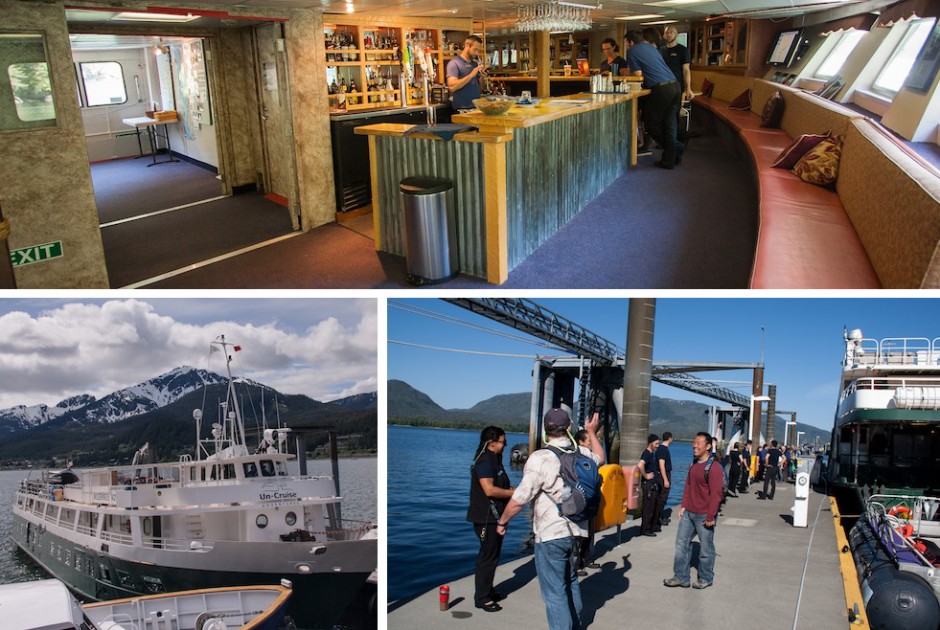 For one week this was home. We slept and ate and were transported around on this boat, the Wilderness Adventurer. I can't say enough good things about the staff, - from the bartender to the stewards to the guides, all were welcoming, friendly, and knowledgeable and went out of their way to make sure all the guests had a memorable experience. On the last day, in Ketchikan, the staff lined up outside the boat to give a personal goodbye to all of us.

Tagged
Travel Alaska, United States
What did you think of this story?
Meh
Good
Awesome