I WALK HALFWAY back to the okapi pens to make field recordings of the forest noises and the faint rushing of the Epulu River behind me. Watching the light change in the forest as I sit monitoring the recorder levels in silence, I am reminded — or perhaps realise for the first time — how strange this place can be. The different sounds in the trees as the birds sing, some acrobatic, mouselike creature leaping from tree trunk to tree trunk just beneath the canopy. The yellow and green of moss and damp leaves bundles between the giant buttress roots pushing out from the forest floor. If “fecund” ever described a place accurately, it’s here.

In the evening, we return to the Epulu bridge and climb onto the riveted iron to take photographs of the sunset. I am struck by just how safe and welcome I feel here. Nothing at all like I had expected. I’m reminded about the description of the area we were given by a photojournalist back in Kampala…a place that seems a lifetime ago right now.

Normalcy is perhaps the most profound lesson of this place. Just how durable the fabric of human routine can be.

Everything is absolutely fine until it’s not.

Danger isn’t an ever-present thing, I guess. Life carries on as people create order out of disorder. It’s only occasionally that the politics of the men with guns intrudes on the normalcy of the people without.

Things are OK, then they aren’t.

Normalcy is perhaps the most profound lesson of this place. Just how durable the fabric of human routine can be. Like the people who would do their chores in Sarajevo. The farmer who plants his maize as a political claim on the future.

Violence is temporary and overpowering, but in the fine details, and the long run, always loses in the face of daily life. The will of a community for stability.

The problem, I guess, is that will to order can only ever cover over violence, not prevent it resurfacing like some evil wizard in a demented jungle fairytale. Truly, finally suppressing violence requires more than the will to order. Underneath the appearance of safe roads and busy markets, school supplies and nighttime food stands, lies a struggle of men with guns. MONUSCO and, in places, the FARDC making up the bedrock on which new order can take root. As long as those foundations hold, they alone can support normalcy indefinitely.

Fort Portal, in the southern part of Uganda, is the last real stop before crossing over to the DRC from that country. The town has plenty of tea plantations and was named after Gerald Portal, whose horribly crafted statue sits on the main street. Portal apparently never made it to the town, dying en route. 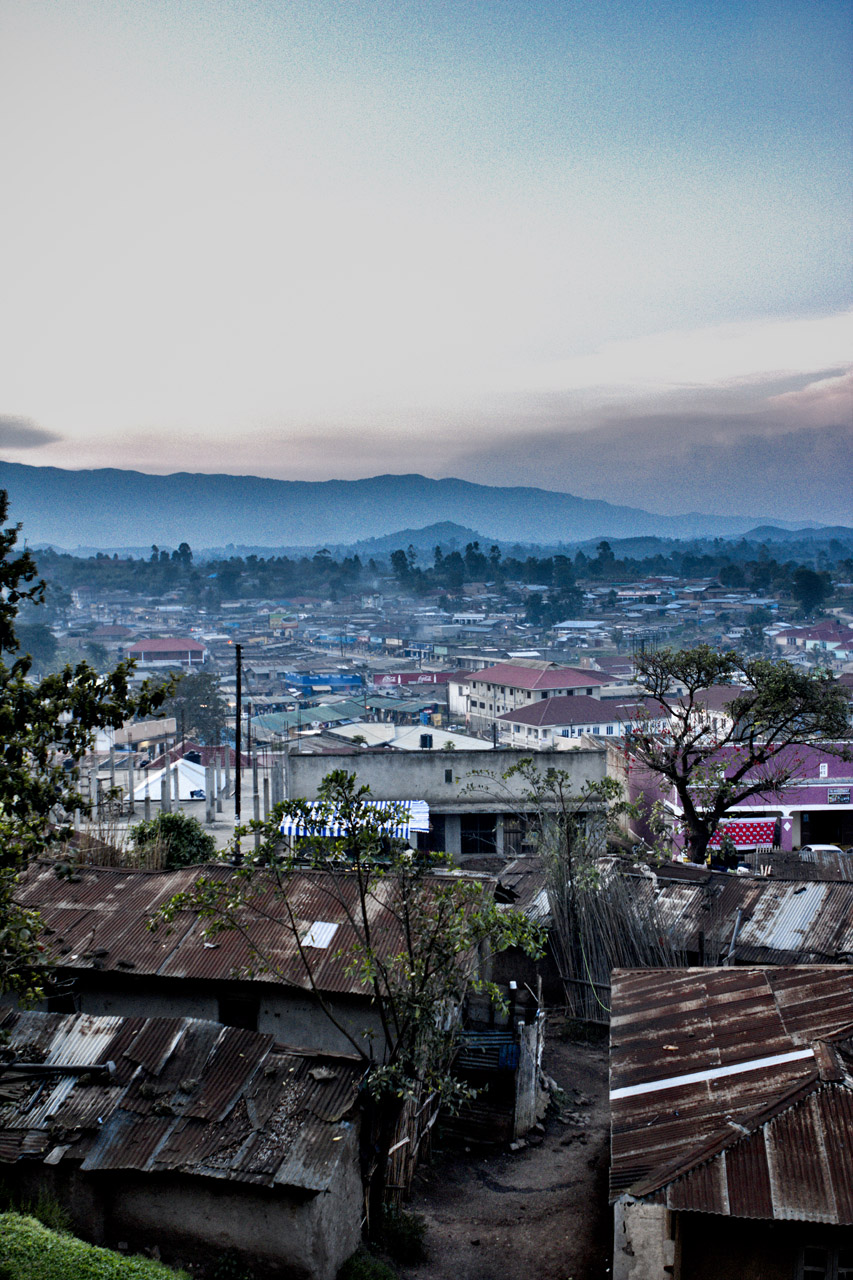 Off to the mountains

Fort Portal is a popular stopover for travelers headed to the Rwenzori Mountains, where it's possible to take part in gorilla tours and hike up to where glaciers remain in the folds of the range. For those on business, Fort Portal leads on to the borders with the DRC that fuel trucks, gold traders, and everyone in between regularly shuttle through. Parts of the DRC are still unsafe, but where there is a will, there is always someone willing to make a Congolese franc. 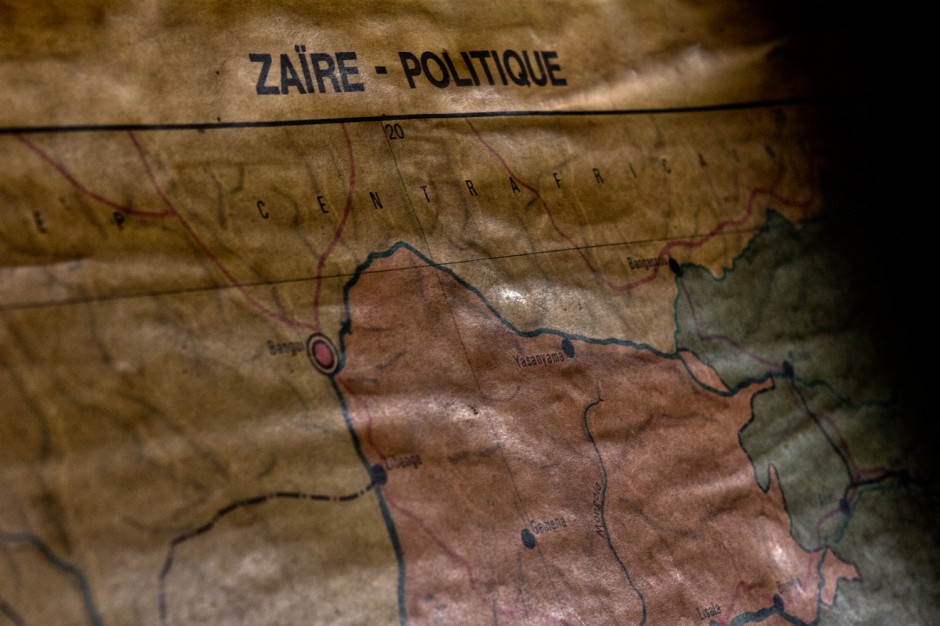 We don't call it that anymore

Previously Zaire, the DRC slid into a protracted period of instability after fallout from the Rwandan genocide and the relocation of the Lord's Resistance Army to the east prompted Uganda and Rwanda to use the country like one giant Europe-sized punching bag. Depending on your politics, they haven't yet really stopped interfering in the country's internal security. That the Eastern DRC is obscenely rich in gold, diamonds, coltan (used in mobile phones, aeronautics, and prosthetics), tin, and cobalt hasn't helped matters. It also supplied the uranium that went inside the bombs that fell on Hiroshima. 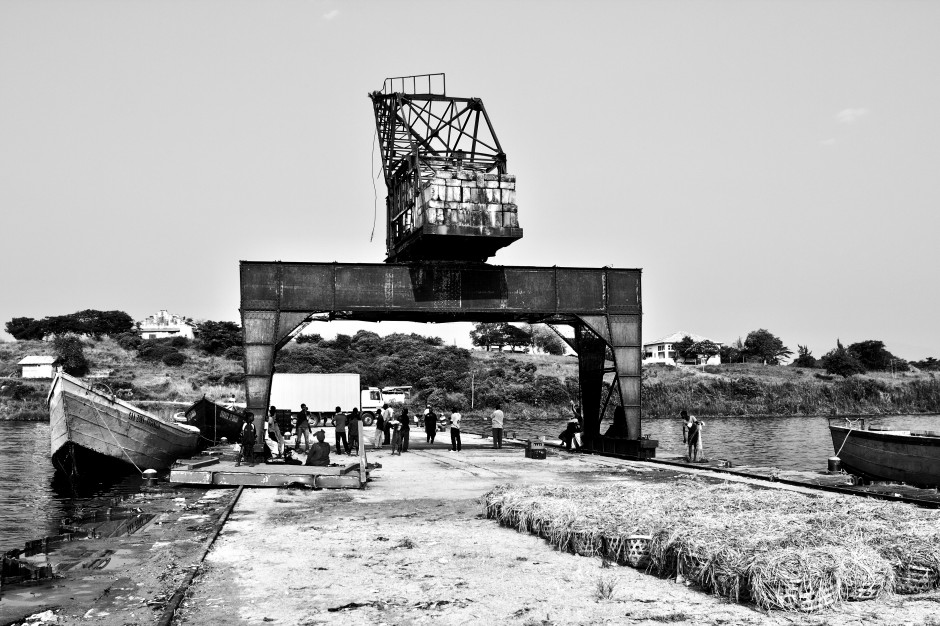 Welcome to the Democratic Republic of Congo

Crossing Lake Albert to enter the DRC via the border town of Kasenyi, a ruined crane serves as an abrupt reminder of what was lost in the years of conflict. Further north, the country produces tons of coffee beans but, for lack of any industrial processing facility (or electricity, for that matter), they are shipped across the border to Uganda, processed, and sold as Uganda-origin coffee. The story of Congo losing out to better-equipped neighbours is a theme repeated far too often.

Boda bodas - the small bikes frequently used to ferry people between towns - derive their name from the fact that they became popular as a means of shuttling people between immigration posts (a corruption of the phrase 'border-border'). With a skilled driver, they can fit a ridiculous amount of gear, people, or livestock as large as pigs and goats. They're also a terribly efficient means of breaking a limb if your driver is inexperienced, so choose carefully. 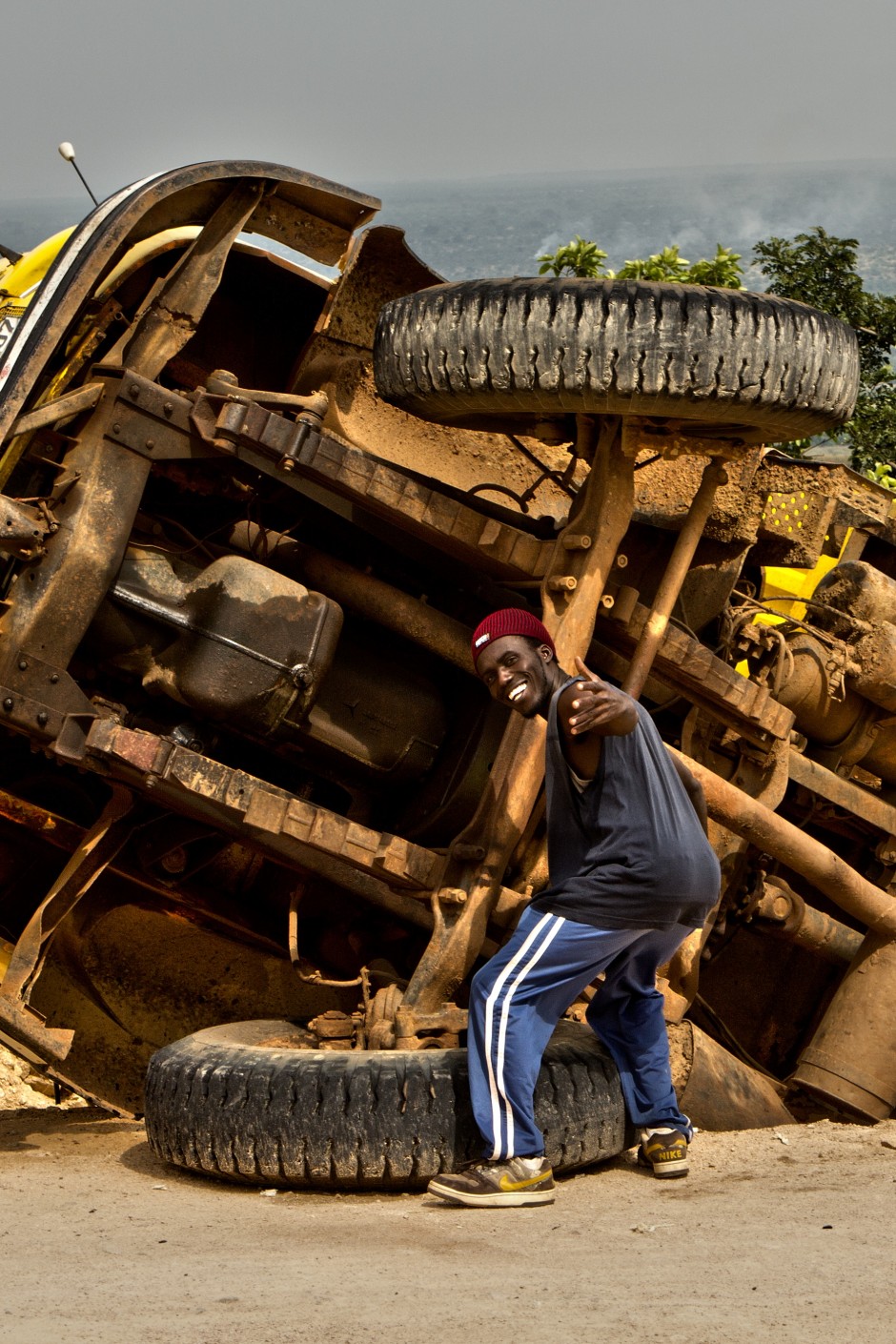 For vehicles far larger than the boda boda bikes, the DRC's roads can be a massive challenge. Traveling between Bunia and Kasenyi, a truck had slipped off the side of the mountain after trying to climb a slope in the wrong gear. Nobody was hurt, but the driver was screaming about the state of Congolese roads to anyone who would listen. Less was said about trying to climb an S-bend in a high gear and forgetting to use your brakes when you find yourself rolling back. Faustin, our translator on the journey, was quick to capitalise on the once-in-a-lifetime opportunity for an epic Facebook profile photo. 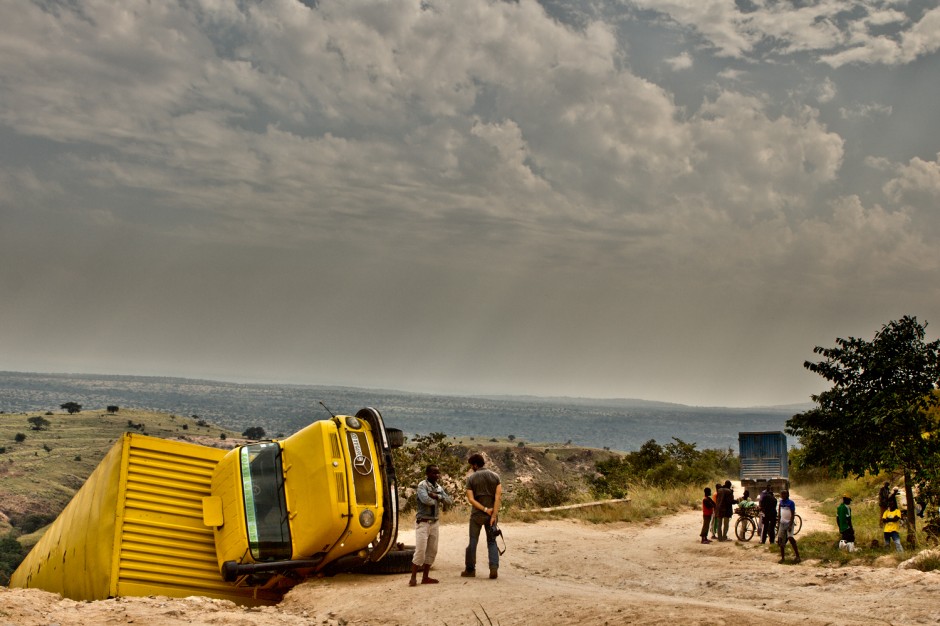 After a few minutes, interest in the wreck had died down and people went back on their way. Though fairly damaged from the fall, the truck would be hauled off the slope in a few days by a bulldozer and repaired before presumably returning to service. It's not just the roads that are well worn; the vehicles themselves take some diabolical abuse.

Seat with a view

Still, goods need to be moved, and the roads - such as they are - remain the only practical route for much cargo headed into the interior. Large articulated trucks brave the roads through Bunia on the way from Uganda to Kisangani with supplies of fuel. Small wonder that diesel in Bunia is a dear $3-4 a liter. The lorries carry much of the formal cargo being shipped to the interior, but there is always room for extras to be lashed onto the top and carried along for a few bonus dollars. Brave souls can even ride aloft for a scenic passenger service with a bit of negotiation. 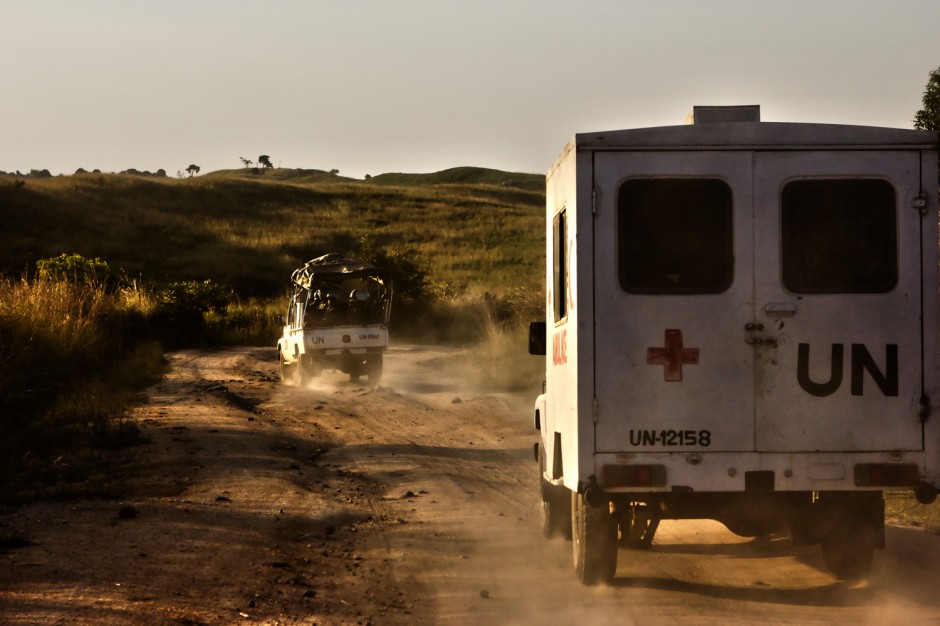 The roads, and most of Ituri district, are kept safe by the UN mission in the area. All told, the United Nations has around 15,000 personnel serving in MONUSCO, its peacekeeping force in the country. MONUSCO is the largest UN deployment in the world, and despite the criticisms leveled at it more broadly, appears to be doing a decent job of holding the peace together in Ituri. The last serious conflict around Bunia occurred in 2005 and since then, what rebels and bandits exist in the area have mostly kept to the forested edges of the district and harass towns closer to the Kivus.

Besides the terrible roads and people with guns and no blue helmets, it's also worth keeping an eye out for local cattle herds. In the relative peace of the last few years, the population of cattle in Ituri is beginning to rebound. Unlike softer farmyard cattle, many of these have horns as long as your arm and thick as your thigh, which grants them an automatic right of way when traveling in groups. 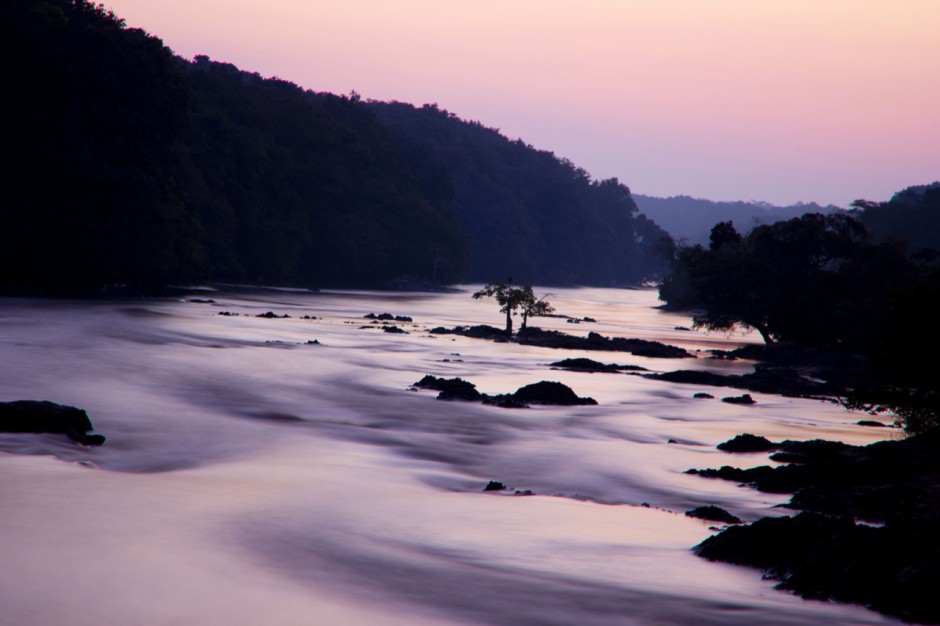 By now, we've been heading west for three days. From landing in Kasenyi, through Bunia and beyond, and into the Ituri rainforest. It's the second largest rainforest in the world and stretches for hundreds of kilometers like a giant green bulwark on either side of the lonely roads that the trucks rocket down. In the evenings though, when the sun falls low and the light becomes fantastical, you would be forgiven for forgetting this is the same place the world cannot seem to describe without resorting to some unreflective Joseph Conrad metaphor. Ituri is undeveloped, and tough to travel, but beautiful for the effort. 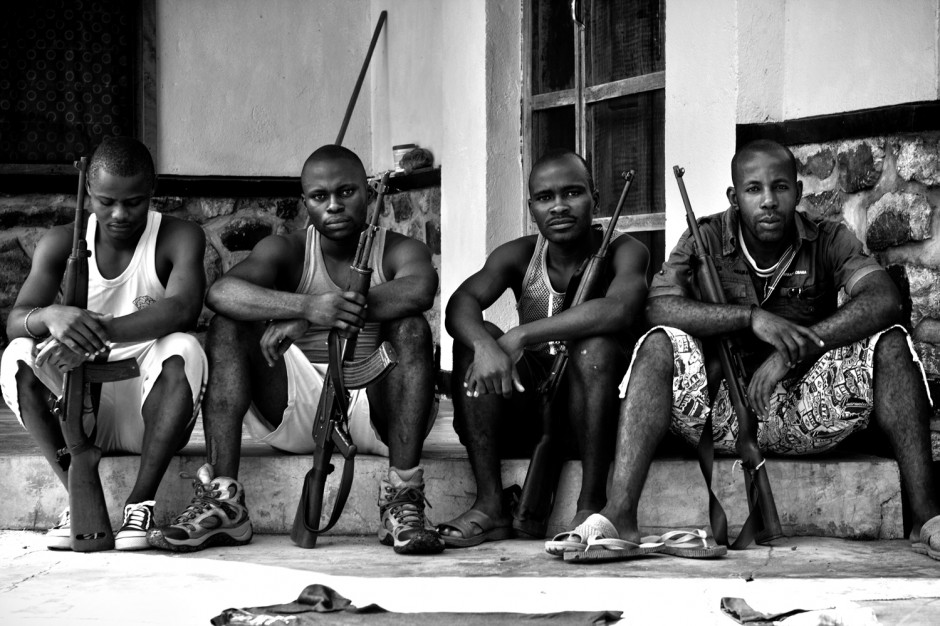 The rangers at the Okapi Wildlife Reserve are a well-resourced and professional team charged with keeping down poaching in a ridiculously large area of land that, for the most part, is thoroughly impenetrable. They also keep their weapons with them even when doing laundry on the weekend. 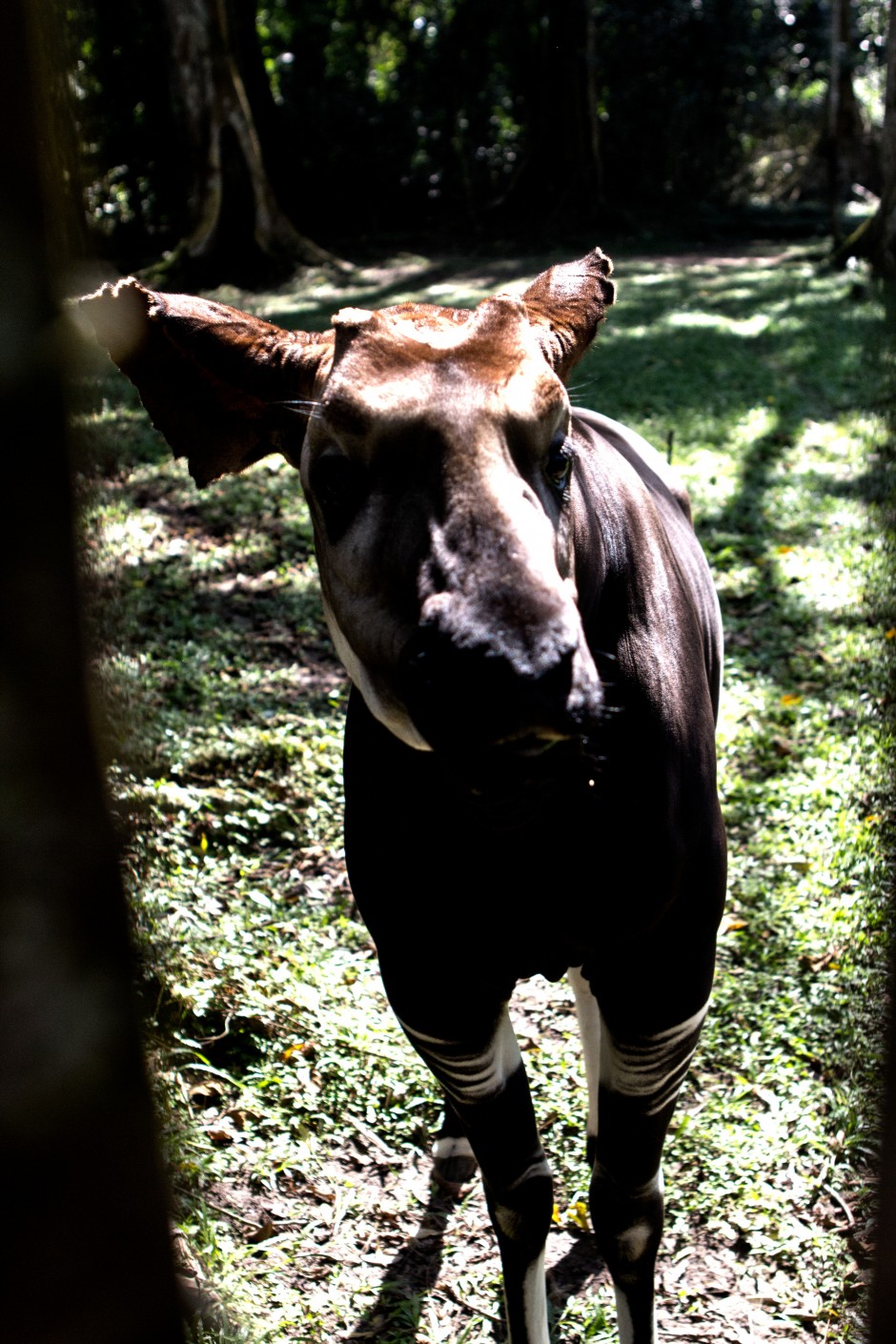 One of the reasons for adventuring this far into the Ituri rainforest. The okapi looks a bit like a zebra from the back, but is more closely related to the giraffe than anything else. It's also highly endangered, occurring only in Ituri and (more recently) in Virunga National Park far to the south. The Okapi Forestry Reserve runs an okapi breeding program to try and safeguard the population. This is Tatu. And yes, she is a girl. 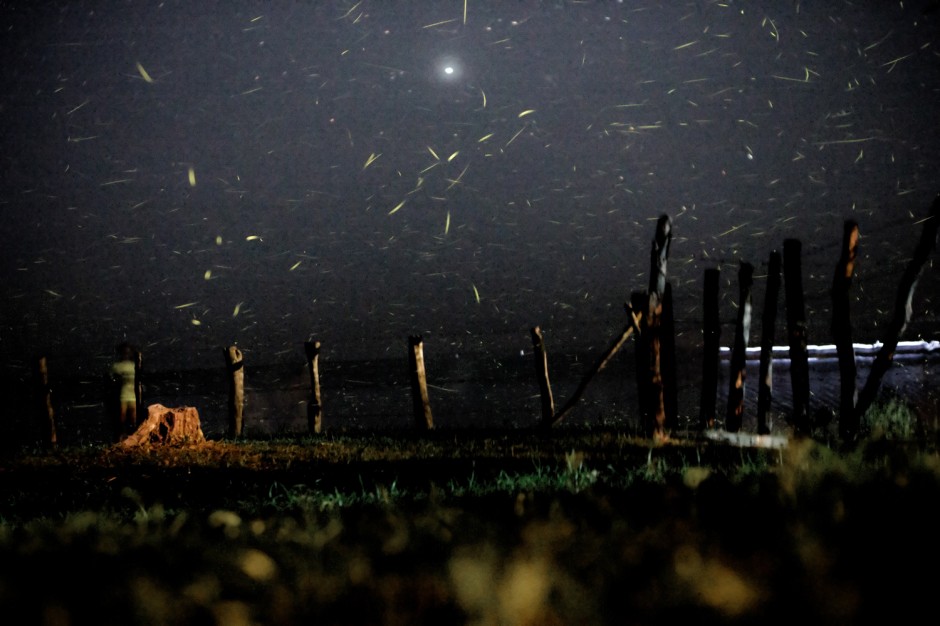 On the last night in Congo, back at the Lake Albert shore, the fireflies came out for one last sendoff. The initial fear of persecution on arrival having long since given way to feeling comfortable in Bunia and Kasenyi, the cameras came out in the night for one last attempt at long-exposure photography.