THIS YEAR WAS THE 40th ANNUAL Balloon Fiesta in Albuquerque. The event draws thousands of spectators and balloonists from around the world. More balloonists per capita live in Albuquerque than anywhere else in the world, and even though the festival is only during a limited time, the weather conditions in the area are such that you can take a balloon ride in the city year-round — be prepared to wake up early, the best time for flight is early in the morning with lower winds and cooler temperatures. There’s also the The Anderson-Abruzzo Albuquerque International Balloon Museum that’s near the Fiesta balloon field that has some balloons on display along with historical and interactive exhibits.

The weather is usually right for hot air balloon flight throughout the event, but an outdoor, weather-dependent event in October in New Mexico means there is likely to be at least one day where things don’t go as planned. For me, it was the first two days of my three-day visit. I was convinced I’d be getting up at 4am to leave only having seen the balloons inflated, but none of them in the air.

But my last day, and the second to last day of the festival, the rain had cleared up, the winds had died down a bit, and while it wasn’t the record-breaking number of balloons in flight they had the weekend before, the balloons were flying.

A lot of people who’d been there before told me that to see the balloons in flight was “magical,” “amazing,” “like nothing you’ve ever seen,” etc. I smiled and nodded, thinking they were being perhaps a bit hyperbolic. They weren’t. I felt like a six-year-old at a birthday party — all smiles, excited, and not knowing which way to look.

The Balloonist’s Prayer
May the winds welcome you with softness.
May the sun bless you with its warm hands.
May you fly so high and so well that God
joins you in laughter and sets you gently
back into the loving arms of Mother Earth.

[Editor’s note: Kristin’s visit to Albuquerque was arranged in part by the Albuquerque Convention and Visitors Bureau.] 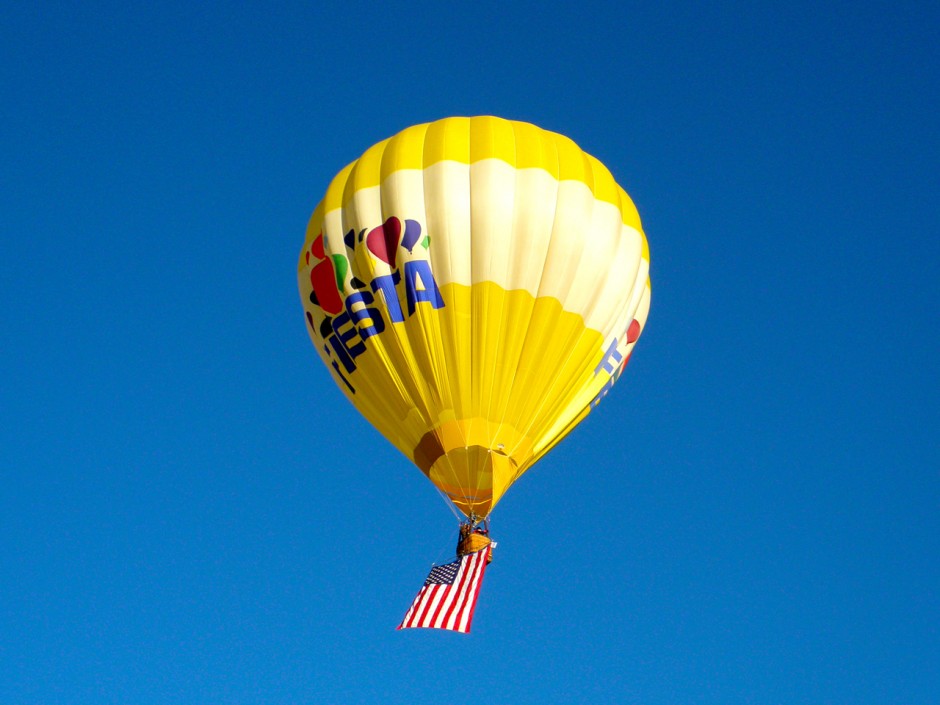 With the singing of the national anthem and cheers from the crowd, the balloon with the American flag was the first up in the air on the second Saturday of the Fiesta. 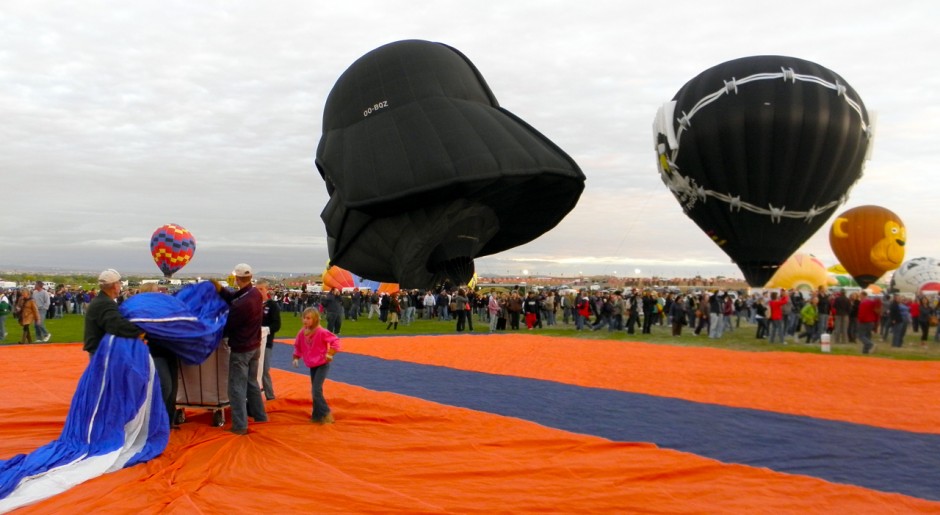 I arrived on Thursday, day 6, and it was the second day in a row that the balloons weren't flying. They were, however, inflating for a standing display. To help protect the balloons and to ready them for inflation, when unfolding the envelope (the balloon itself), a large ground cloth is spread first; then the envelope is carefully removed from storage.

If you look at Darth Vader, you can see his registration number - the majority of the balloons are registered as aircraft with the FAA, and the pilots registered to fly "lighter-than-air" aircraft. 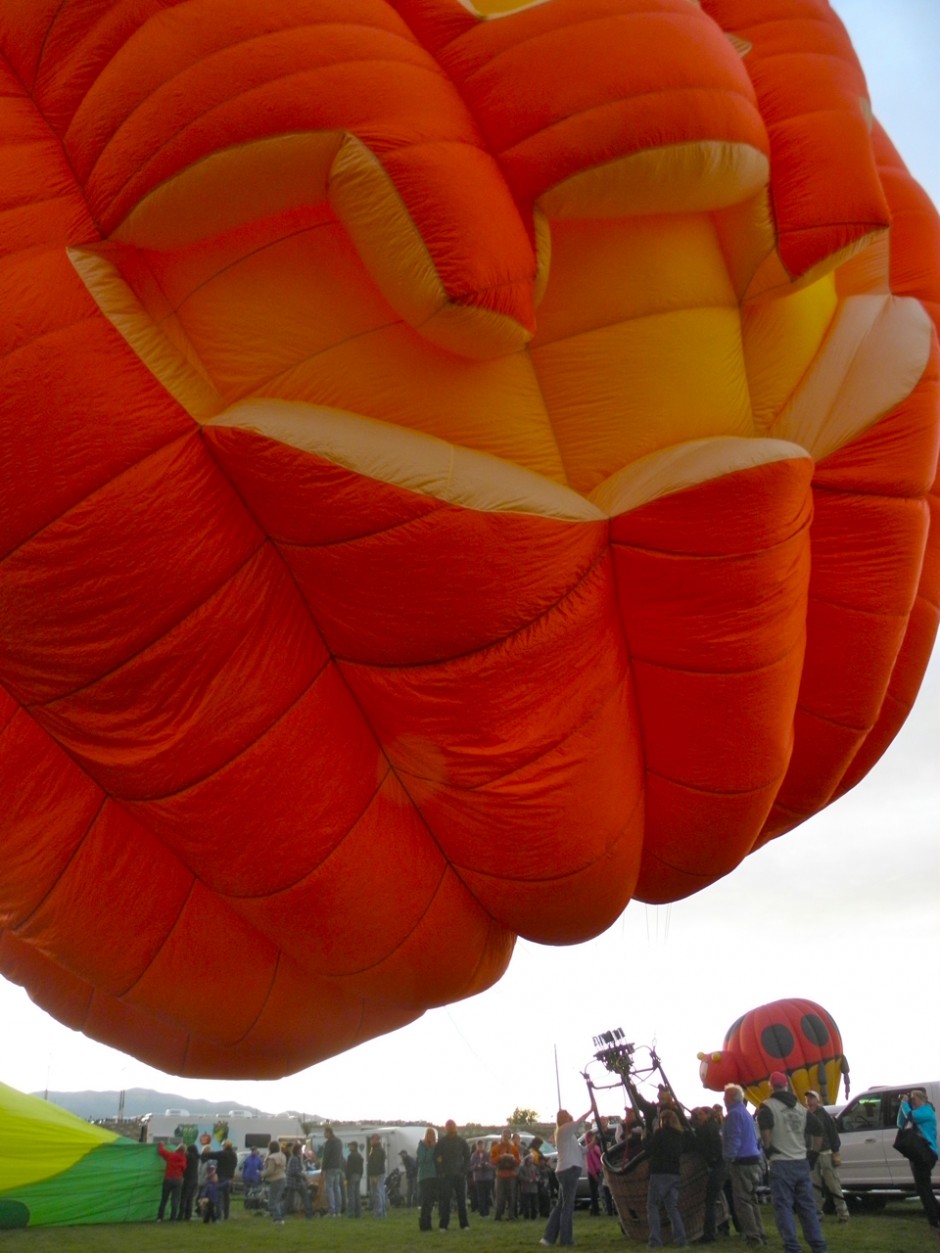 Pumpkin Head is 100 feet tall and 176 feet around. That's about 10 stories worth of balloon. Inflating the balloons requires a crew of at least four - in this case, they needed to inflate enough to get the balloon vertical, but not enough for it to fly. 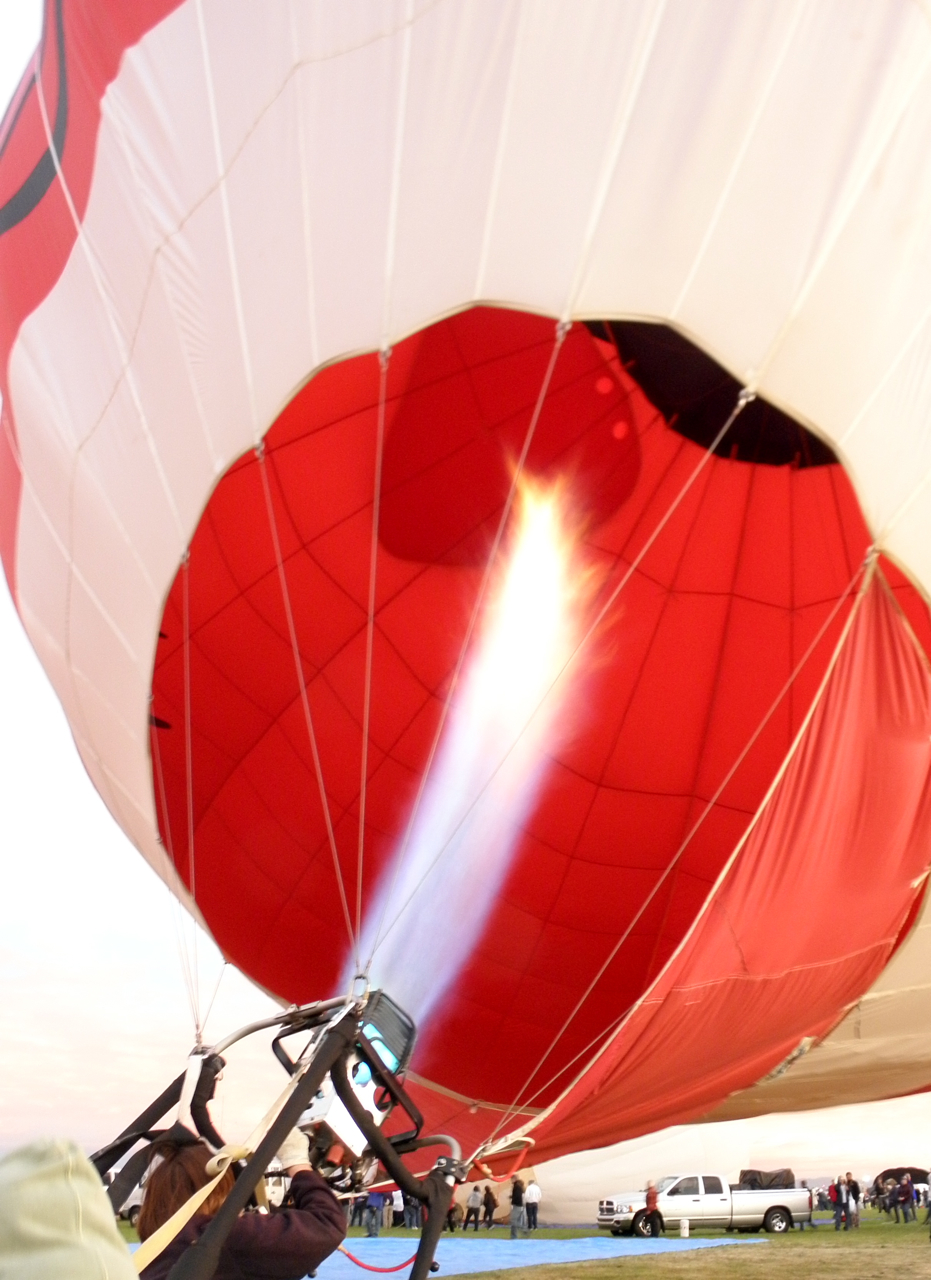 The flame from burning natural gas is directed into the envelope to give the balloon the necessary hot air to lift the balloon after it's been partially filled with a powerful fan. 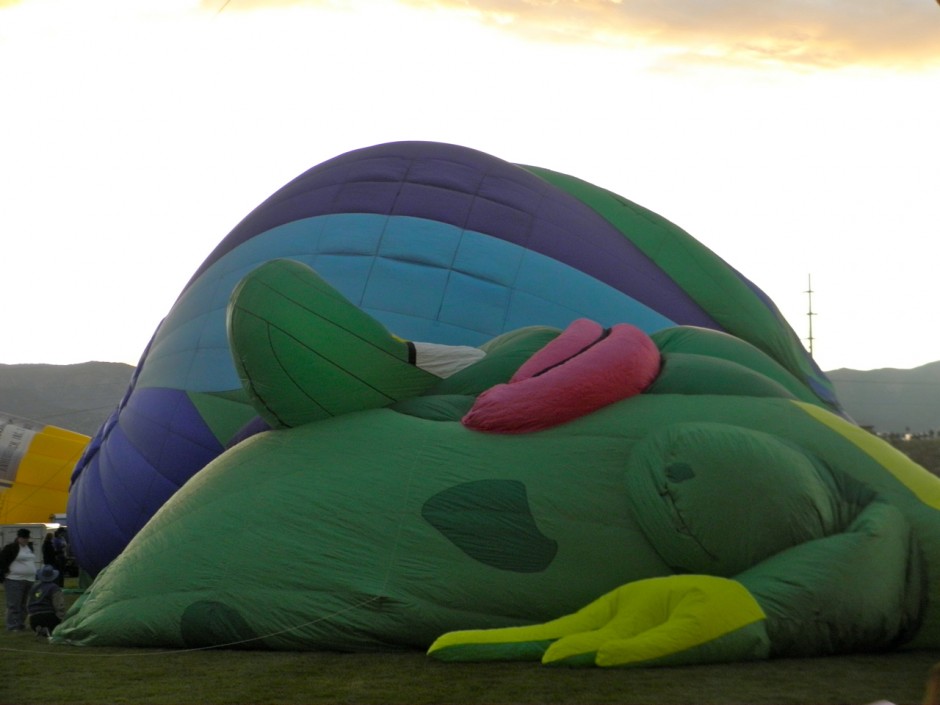 As the special shapes inflated, we tried to guess what each would be. Hopper T. Frog was pretty easy. 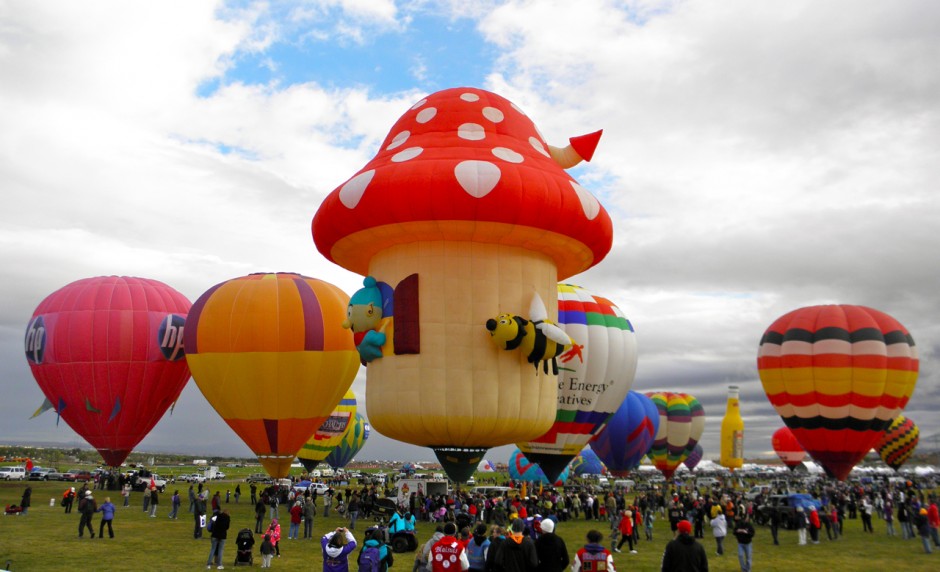 Shroom with a View

Shroom with a View was trickier - we were sure it was a ladybug. Then a mushroom. We didn't know mushroom house was even an option. 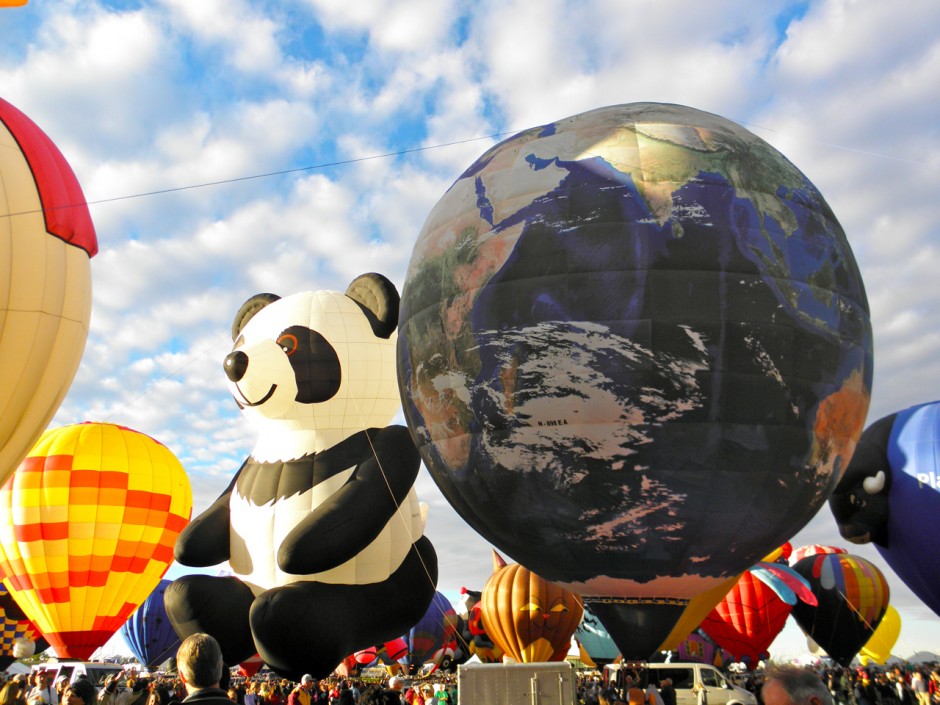 Even not flying and just in the static display, the giant balloons popping up everywhere you looked was incredible. 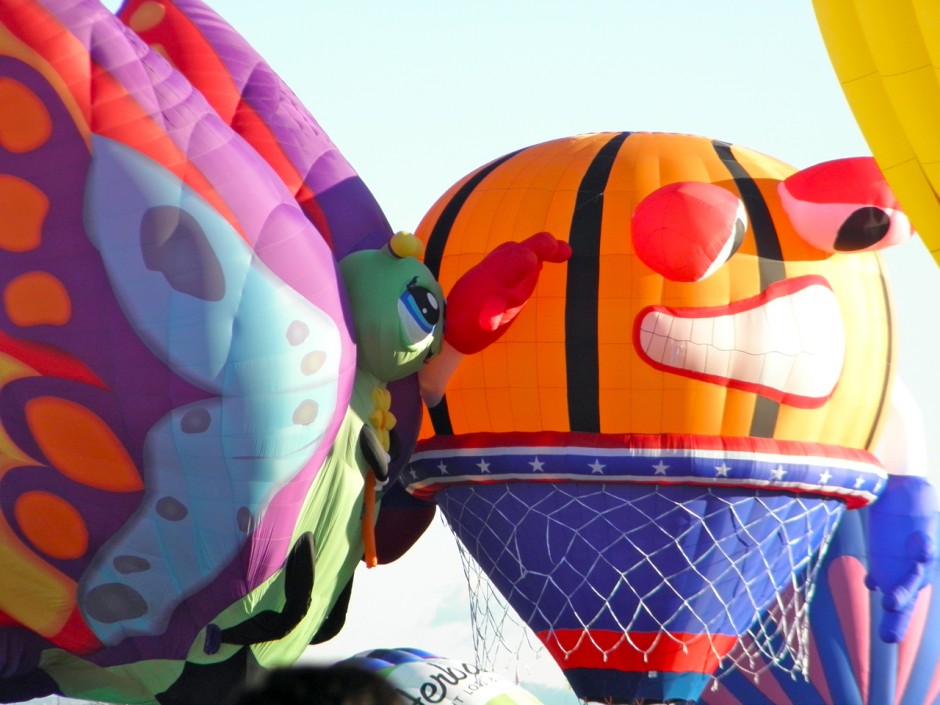 Basketboll is a Brazilian balloon and Butterfly is an American one; the festival brings in balloonists from around the world. 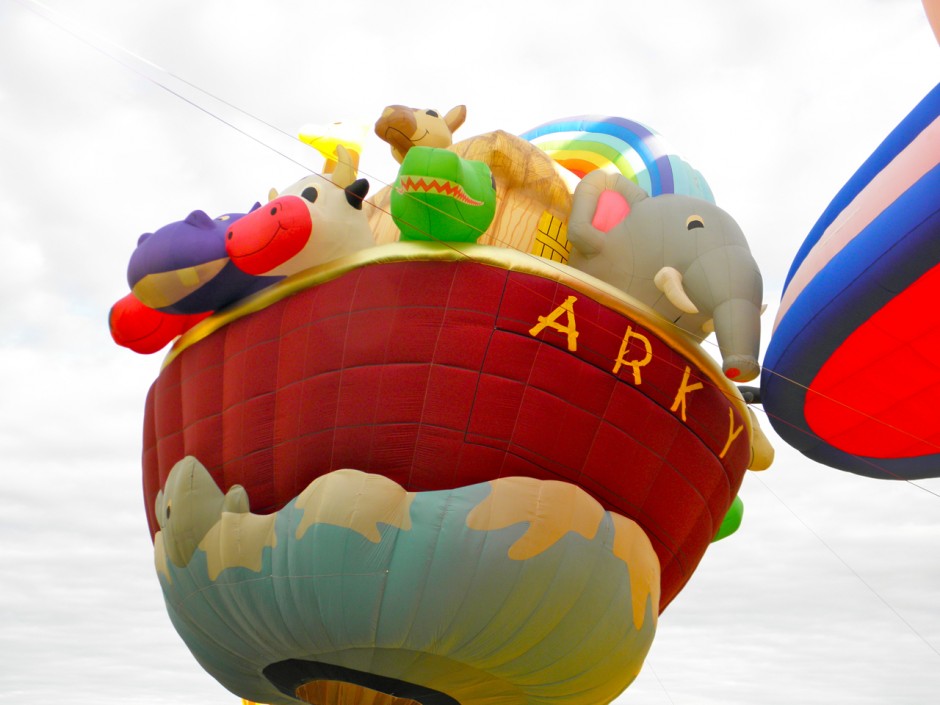 Arky has flown at the Fiesta for the past 16 years; the balloon is 85 feet tall, 55 feet wide, 110 feet in length, and weighs 800 pounds. The sheer size is why it takes so many people to work on the crew for a hot air balloon. 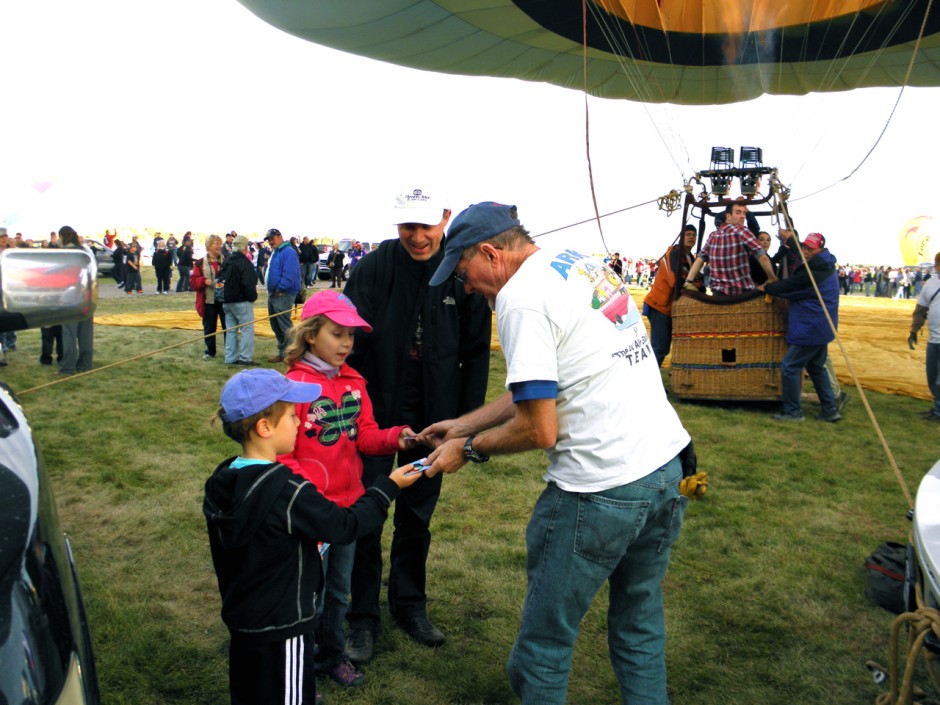 Pin collecting and trading was a big deal, with each pilot having a pin featuring his/her balloon. But the pins cost money; for a cheaper alternative, you could get a card from each pilot - a bit like a baseball card with a picture of the balloon on the front. It was very popular with kids, and I wasn't about to turn down a card if it was offered to me. 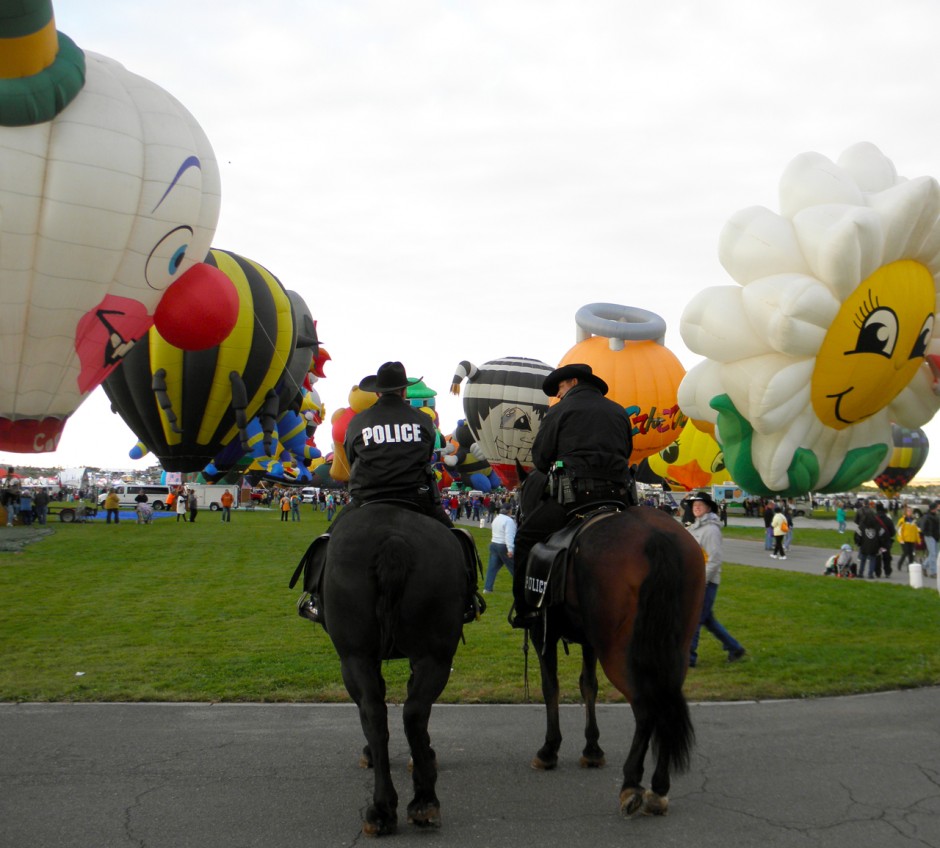 Over 3,000 volunteers help run the event, and tens of thousands of people attend. The police presence to help with crowd control was clear, but unobtrusive.

The balloons themselves had their own regulators - "zebras" dressed in referee uniforms and making sure balloons didn't hit each other, the envelopes don't collapse onto people as they deflate on the field (watched a few near misses), and to coordinate the flights. 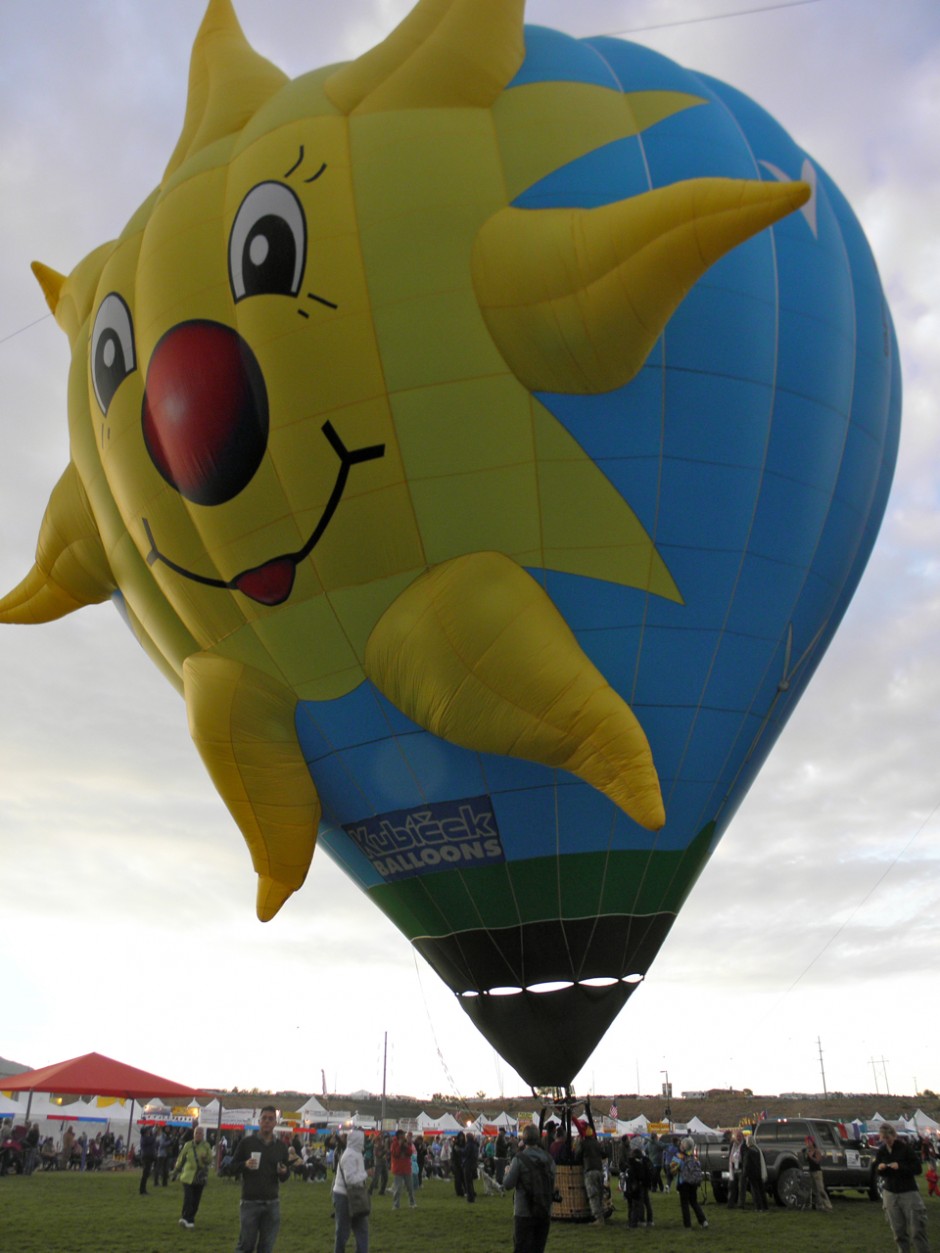 While beautiful to look at, this balloon seemed a bit like it was mocking me since the first two days I was at the festival it was windy and rainy and there was no chance of the balloons flying. 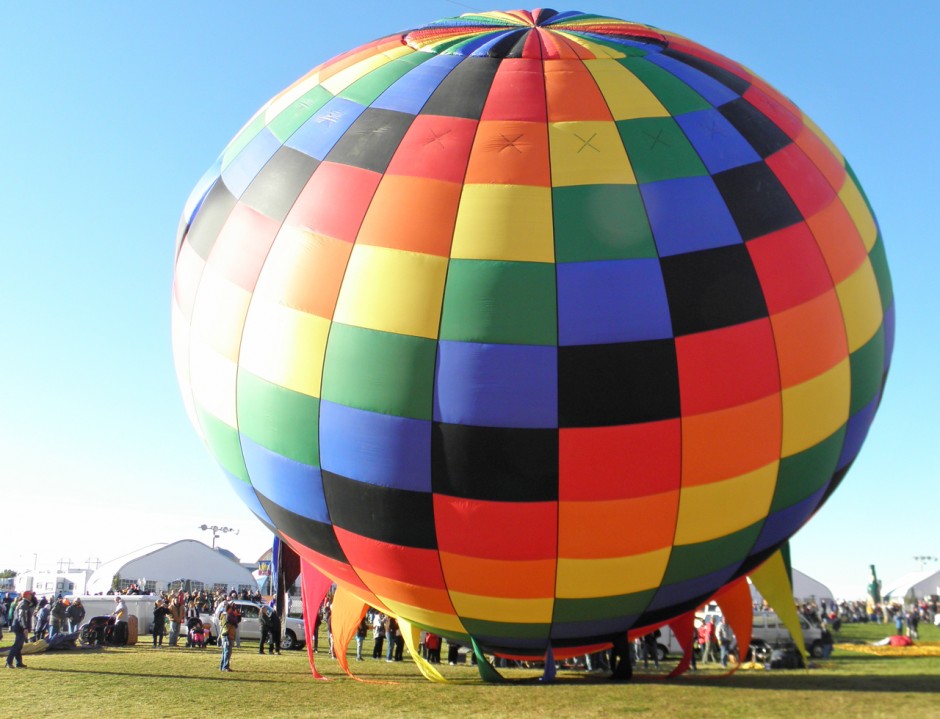 Some of the pilots make their living flying the balloons, while for some of the others, it's a hobby. An expensive hobby - balloon costs start around $20,000. 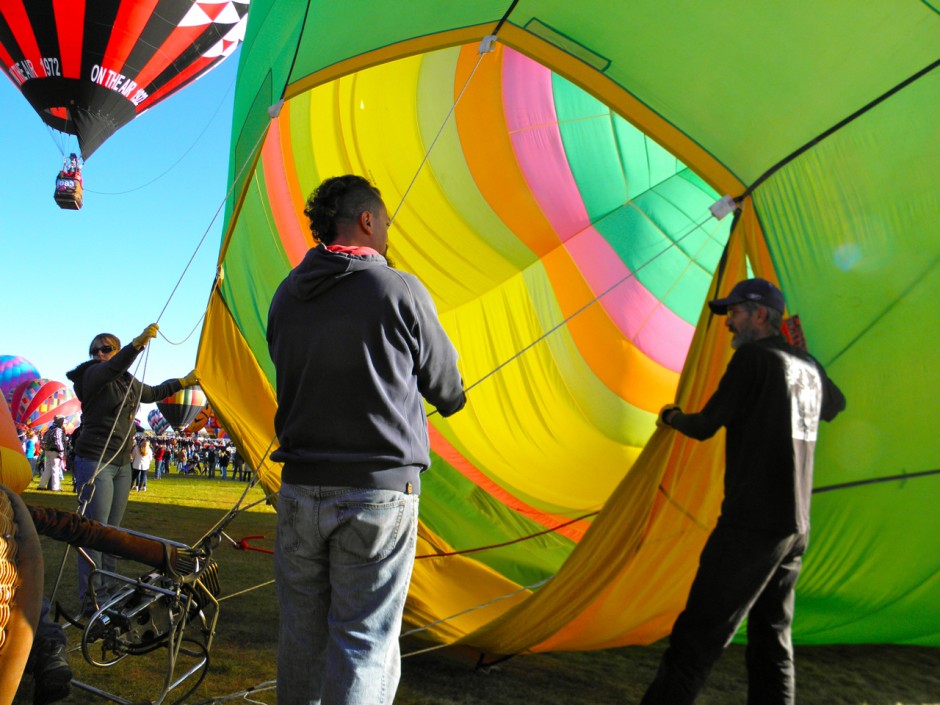 Lily getting ready to fly

But as the sun came up, the winds changed, and balloons began to actually take off. I was signed up to take a ride in Lily, piloted by Cliff Keller. 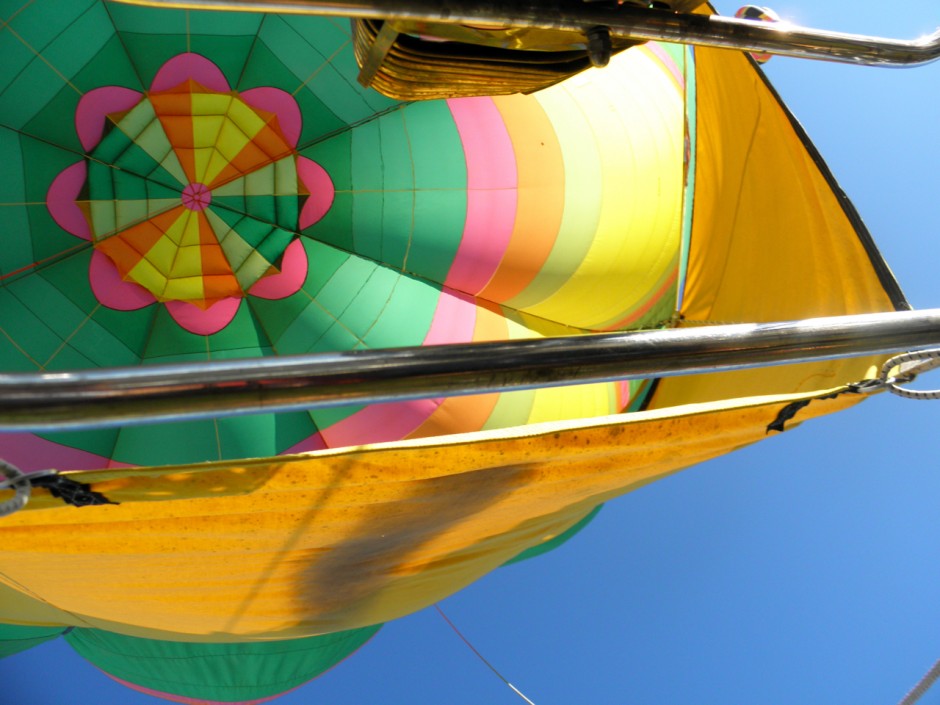 All balloons need vents in the crown to allow the release of air to control the landing. 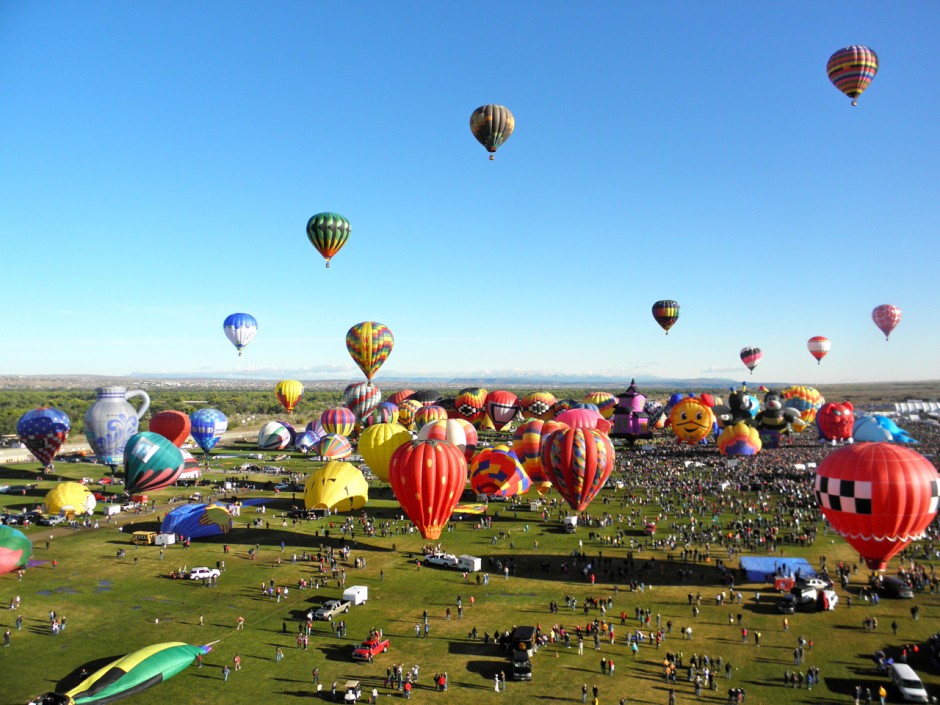 View of the balloon field

As I got in the balloon, I figured that perhaps I should have reconsidered since I'm not a huge fan of heights. Even the pilot after the flight mentioned that when I got in I looked pretty anxious. 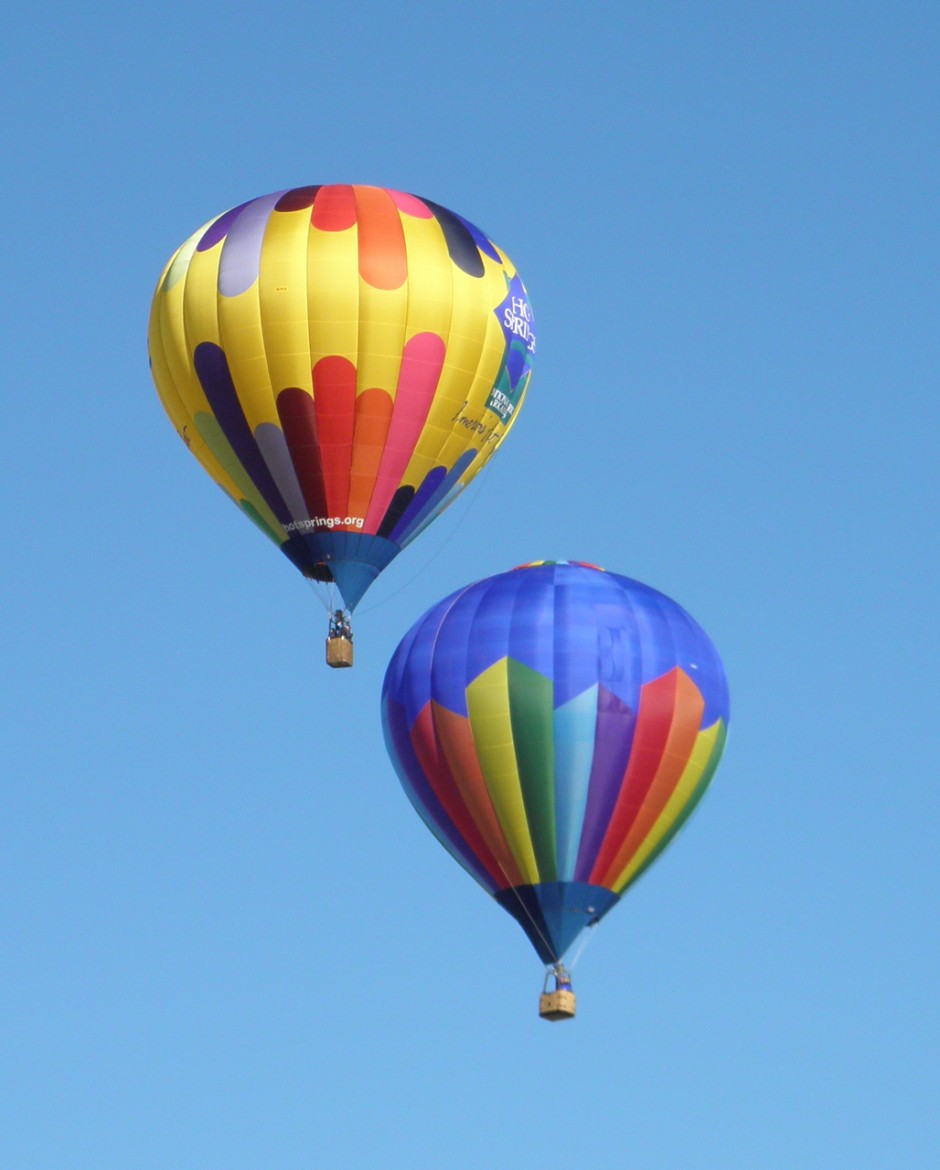 A few moments after this, the balloon envelopes "kissed" -- the envelopes touched briefly, gently, and, I hope, intentionally.

In the air, the balloon that's lower gets the right of way since it has less room to maneuver. 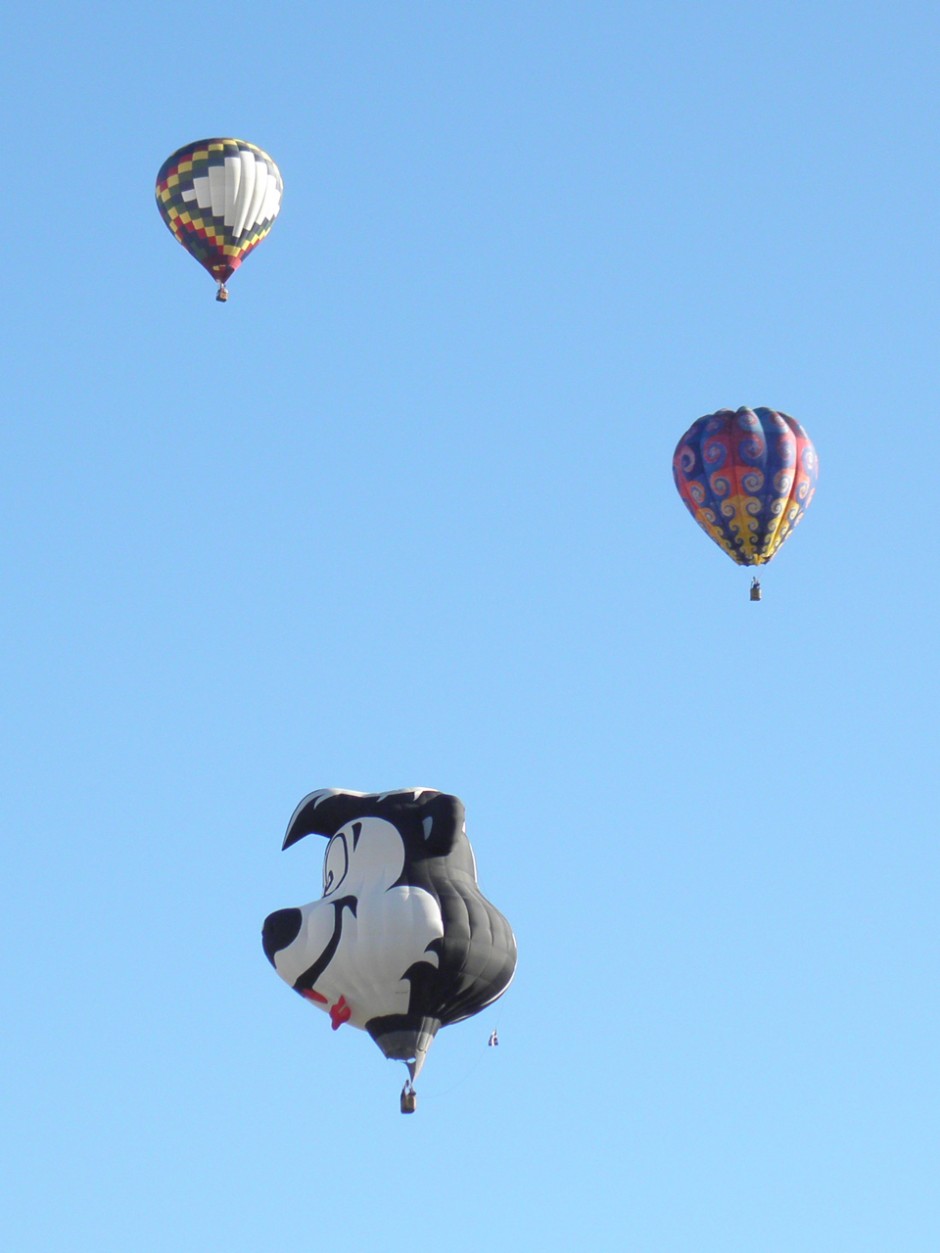 Most of the balloons flying were the "normal" shape, but a few special shapes took flight, including the Brazilian balloon Stinky. 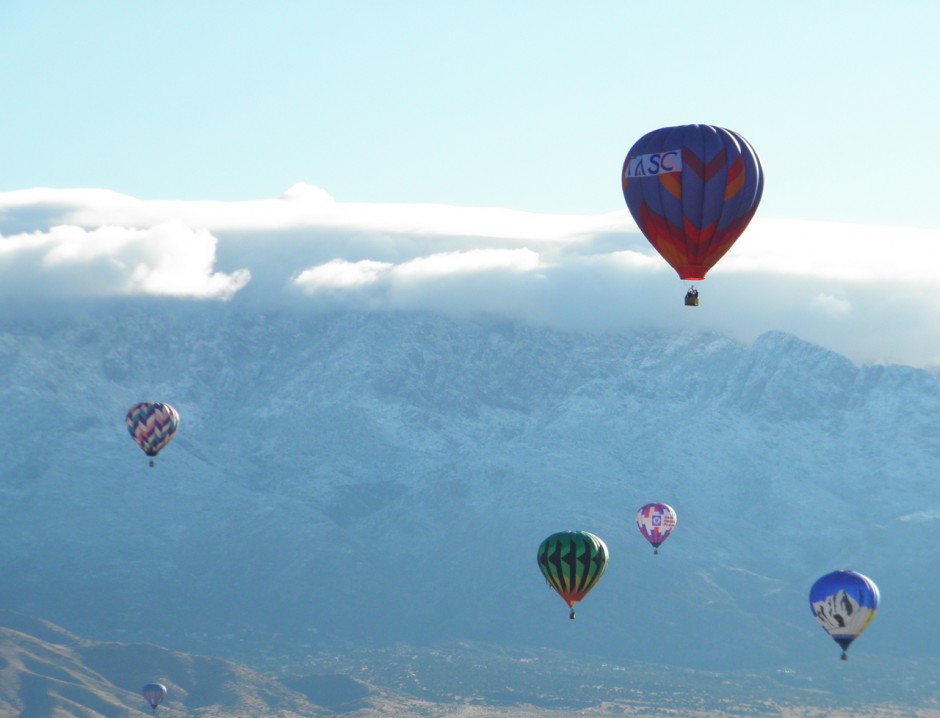 Snow on the Sandia mountains

The first dusting of snow of the year showed up overnight on the Sandia mountains. And the winds, usually pushing the balloons to the south, moved them east towards the mountain this day. 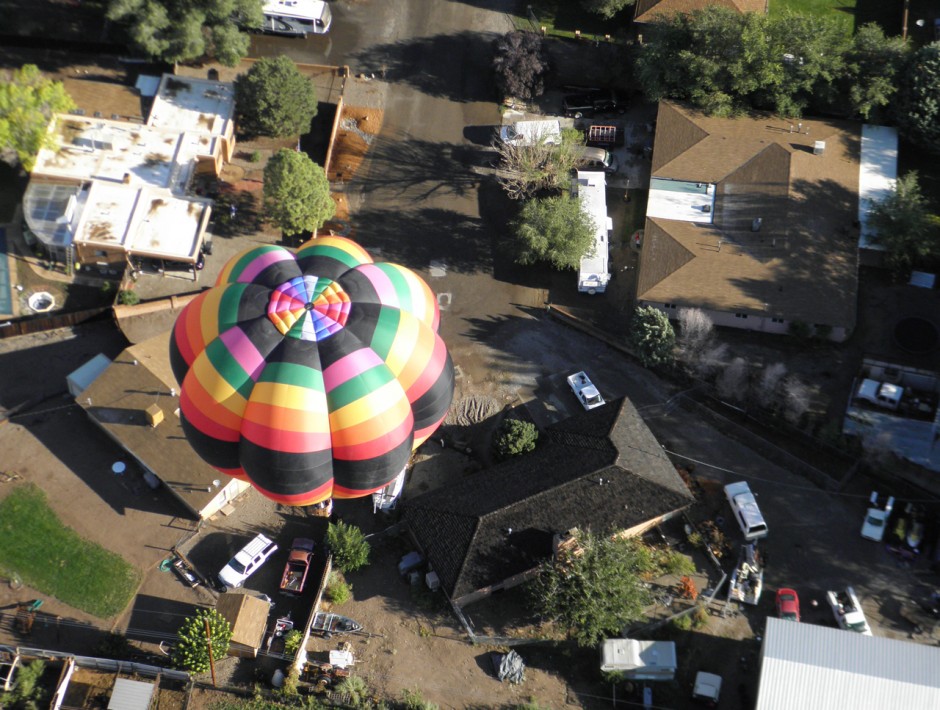 My job as passenger was to "keep my eyes open." I was to look out for power lines and balloons below us. This one was far enough away that it wasn't of concern.

While I may have been nervous at first, the sight took my breath away. No matter which way I looked, I could see balloons, quietly, peacefully floating through the air. I couldn't quite believe I was amongst them. My awe must have shown up on my face; the pilot said though I looked anxious at first, not long into the flight I "was glowing." 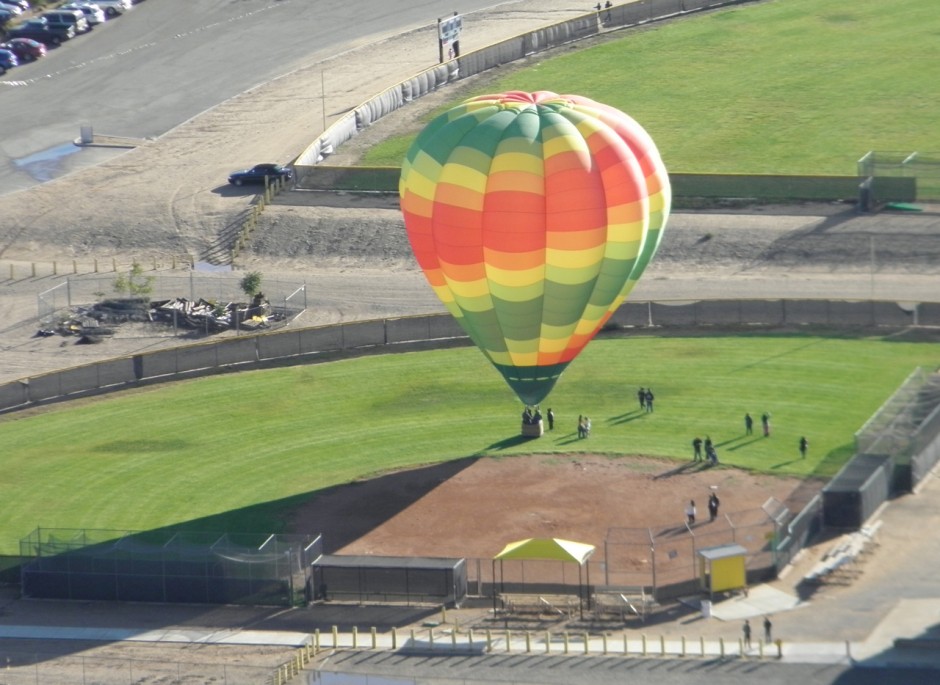 It doesn't take much room for a balloon to land. A few days earlier, Cliff had landed in someone's backyard. This balloon aimed for one of the many nearby baseball fields. If balloons go north, they could end up on reservation land, and the chase crews aren't allowed to come get them. We were headed south, and we landed in the middle of a street -- a strategic move to help keep the envelope dry; when the balloon is deflated and packed up, it has to be laid out on the ground. With the rains, the grass and ground were damp, which could lead to a wet, mildewing balloon. Cliff had been flying for 30 years; he wanted to put away a dry balloon. 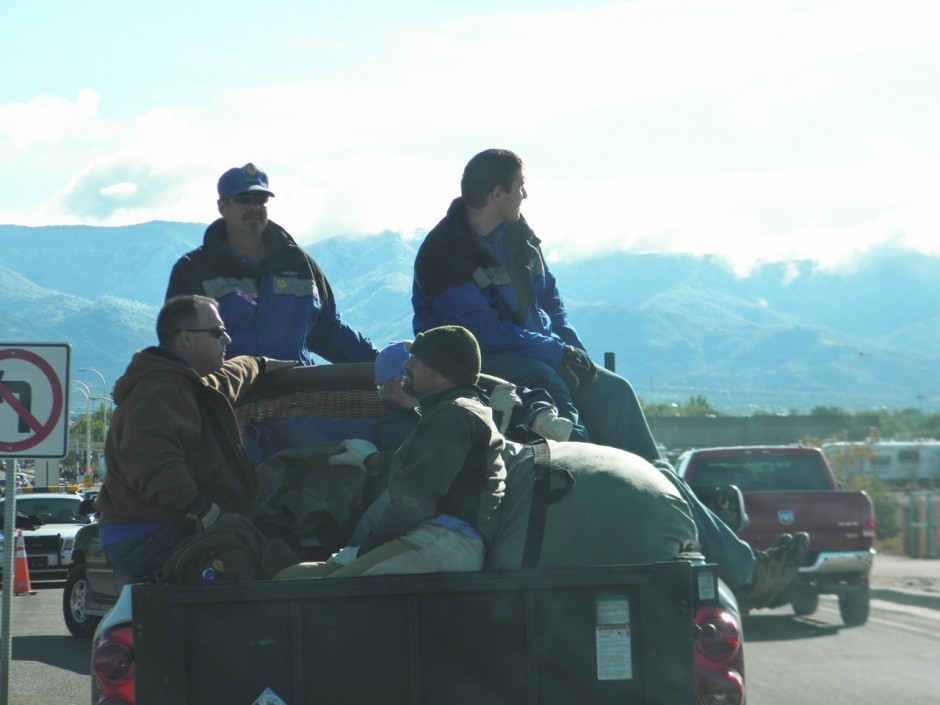 Back to the field

After the balloons land, the chase crews head to the landing site to pack the balloon back up and head back to the balloon field.

Albuquerque’s annual Balloon Fiesta is back, and it’s going to be epic

Beyond blue meth: Albuquerque worth visiting for more than ‘Breaking Bad’

Why Albuquerque is the perfect fall getaway

20 Albuquerque bars and restaurants us locals live by

You know you’re from Albuquerque when…