View all travel news
Top Destinations
Top CitiesView All Destinations
Trending Regions
Trending Cities
Load More
Travel advice with photographic accompaniment from Christan Leonard on how to get to and around La Guajira desert, Colombia.

AS A NATIVE OF THE PACIFIC NORTHWEST, I grew up under the mistaken impression that if nature wasn’t green, a volcano had probably erupted on it. The desert seemed like a wasteland compared to the dense forests of the Cascades. So I wasn’t really expecting to like Punta Gallinas, the northernmost tip of South America that juts out from Colombia’s La Guajira desert. But a friend wanted to go during her last few days in Colombia, so I decided to keep her company.

Arriving at Punta Gallinas was like walking into a modern art museum for the first time, where the distinct lines of the sand dunes were an abstract painting, while I was used to the infinitely detailed realism of a Northwest pine forest. It took some getting used to, but by the end I’d gained a new appreciation for the landscape — and a new respect for the people who live there.

Hammocks run 12 mil a night and the price of food varies, but don’t expect to eat anything but fish and scrambled eggs.

You can arrange an all-inclusive 2-night tour out of Santa Marta for about 600-650 thousand (mil) pesos* per person, which will take you through the departmental capital of Riohacha, the indigenous capital of Uribia, and the fishing village of Cabo de la Vela. Going without a tour, you can save upwards of 300 mil, but it won’t be quite as comfortable and you’ll likely have to waste time organizing transport.

From Santa Marta, the bus costs 18 mil to Riohacha, where you pretty much just have to ask around (hotel owners are usually helpful) and find a group taxi to Uribia for about 10-12 mil per person. Once you get out in Uribia, you’ll be overwhelmed by shouting truck drivers who’ll try to cram you into the back of their pickups for another 10-12 mil drive from Uribia to Cabo de la Vela.

In Cabo, you’ll need to ask a local to organize transport to the port — again, hostel owners are usually connected to these guides and can contact them for you. The ride to Puerto de la Media Luna and the final boat ride costs 150 mil for a round trip from Cabo, which includes a tour of the peninsula but not food or accommodations. Hammocks run 12 mil a night and the price of food varies, but don’t expect to eat anything but fish and scrambled eggs. 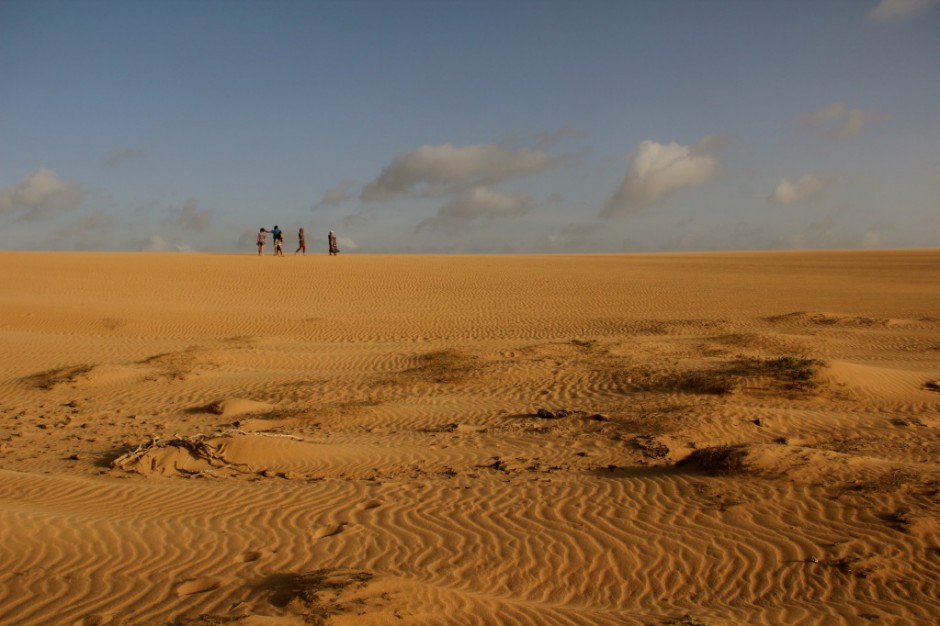 Give it 10 years and Punta Gallinas will be crawling with tourists, but for now, the isolated coastal desert is one of the few parts of Colombia that has not been inundated with backpackers. 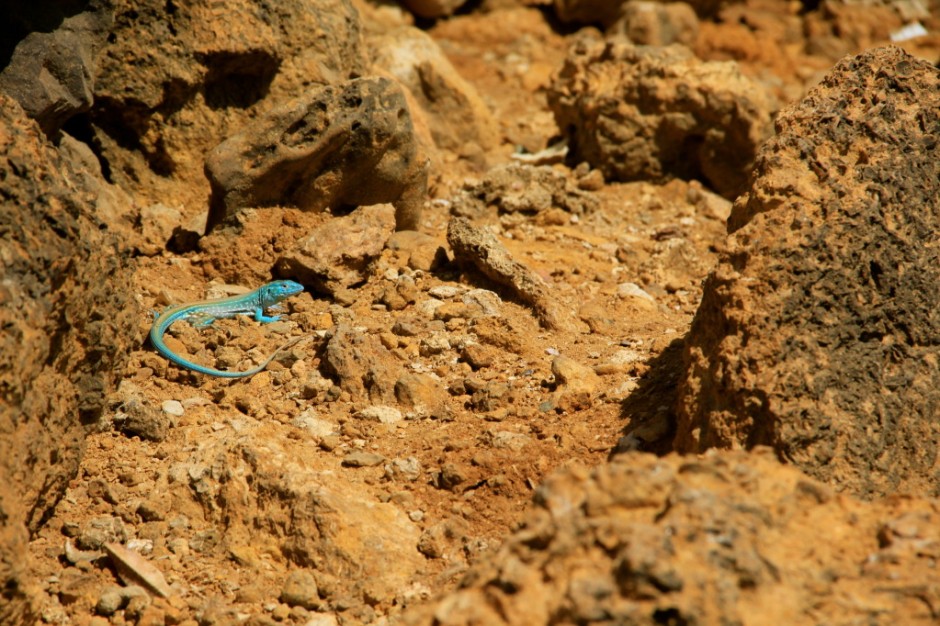 The desert can seem dead and abandoned at times, but look harder and there are signs of life everywhere. Here, a lizard wanders among the rocks at Puerto Media Luna. 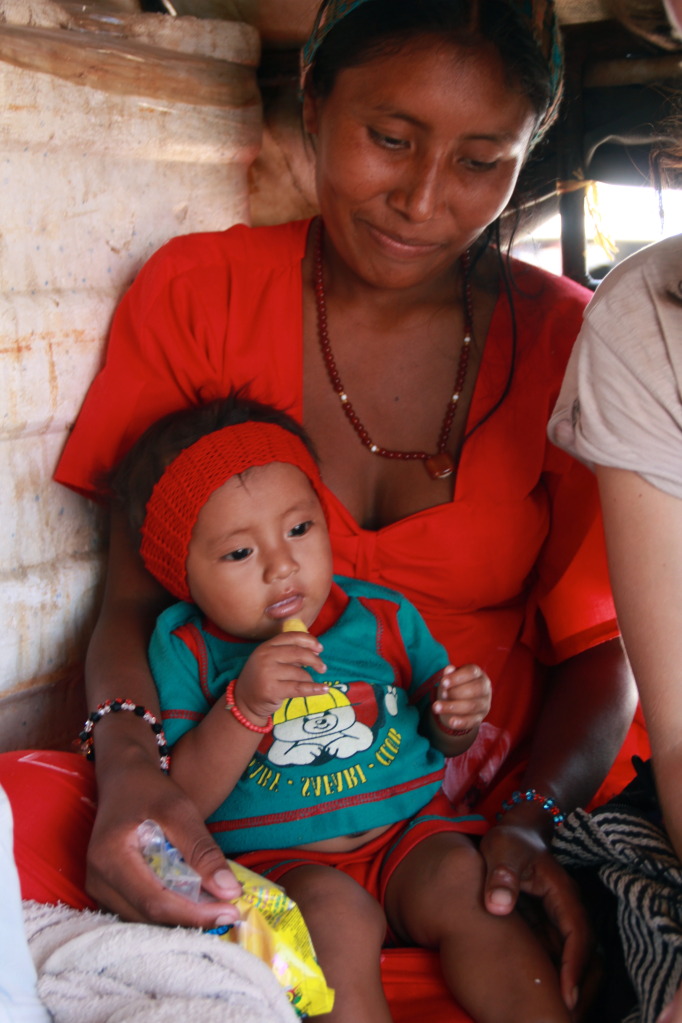 Travelers to Punta Gallinas should be prepared for a long, hot, and sweaty journey. From the departmental capital of Riohacha, expect to spend at least four hours driving on poorly maintained dirt roads in buses, cars, or squeezed into the back of pickup trucks. Here, one local woman and her daughter settle in for the two-hour ride from Uribia to the coast. 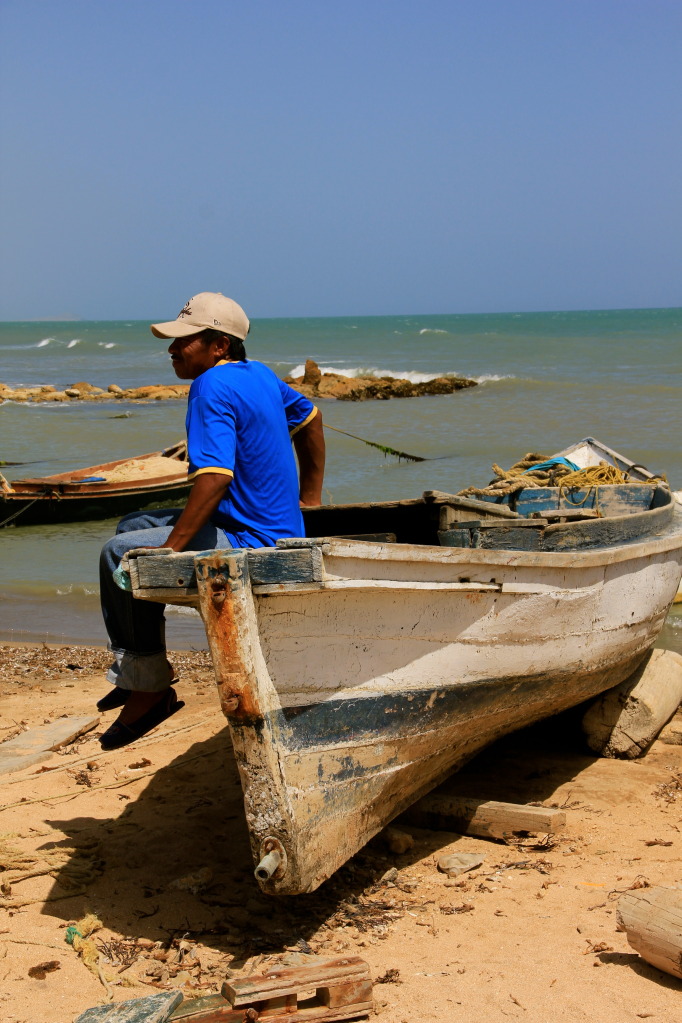 From Puerto Bolivar, where Highway 88 ends, it's another three hours by motorboat to reach Punta Gallinas. The Caribbean is immensely beautiful, but the small boats are a poor match for the high waves and it's a wet and dizzying voyage. 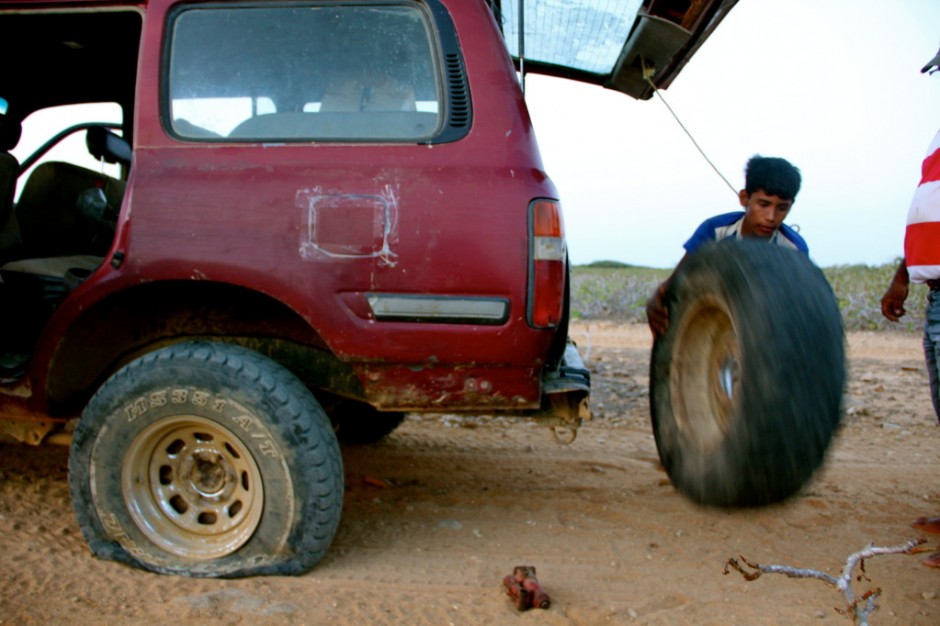 Prepare for the worst

At Punta Gallinas, paved roads are an unaffordable luxury and 4WD an absolute necessity for exploring the rocky terrain. Word of advice: Never leave the house without a spare. 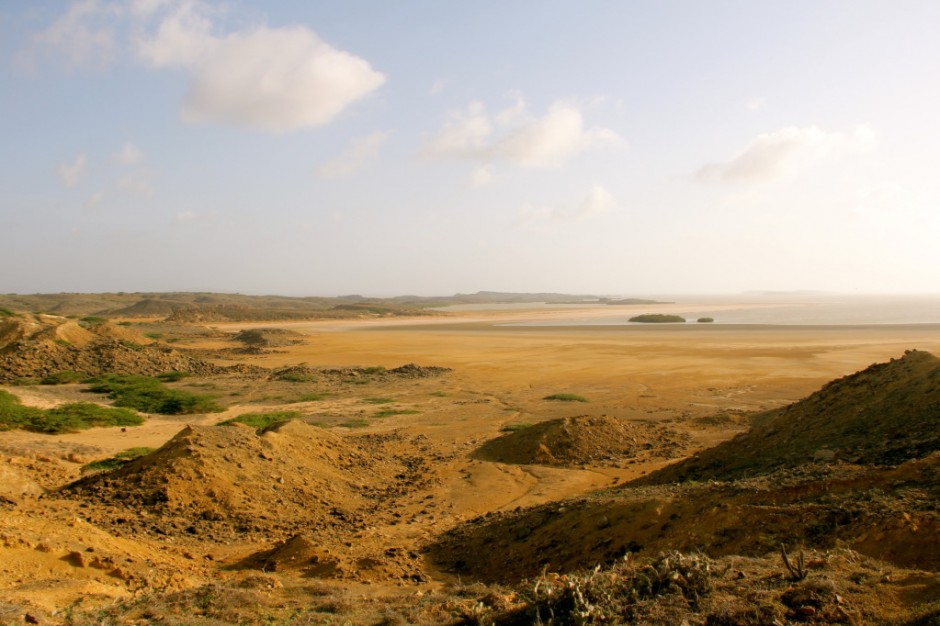 View to the sea

But once you arrive, you get coastal views like this. The beach shown here is just one of many that surround the Punta Gallinas peninsula. 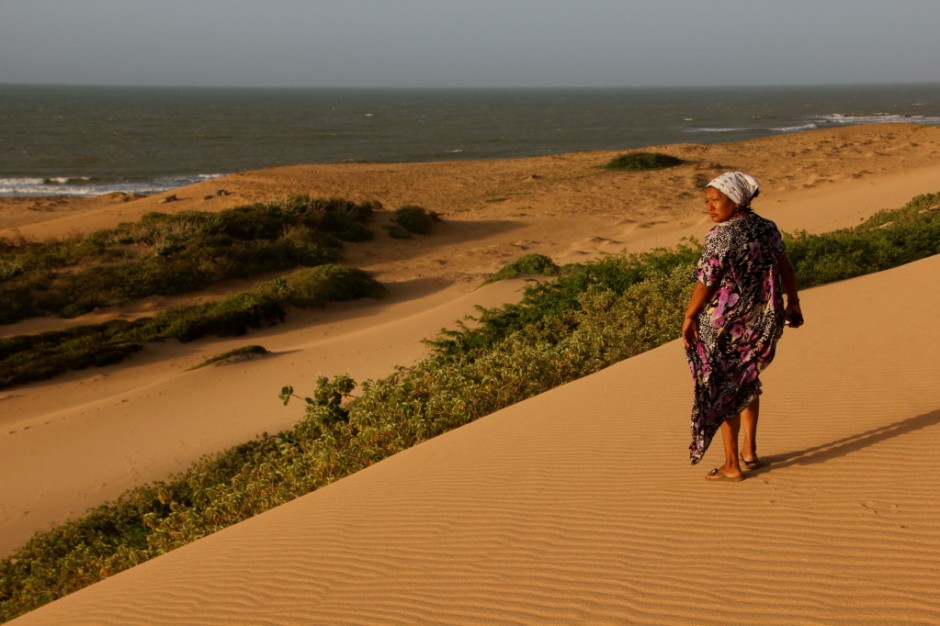 Most residents of Punta Gallinas, such as the woman shown here, are members of the Wayuu tribe who have lived in La Guajira for centuries. Visitors can arrange to stay with Wayuu families and learn about their traditions and way of life. Wayuu women wear long, loose-fitting dresses to protect themselves from the sun, sand, and stray cactus spines. 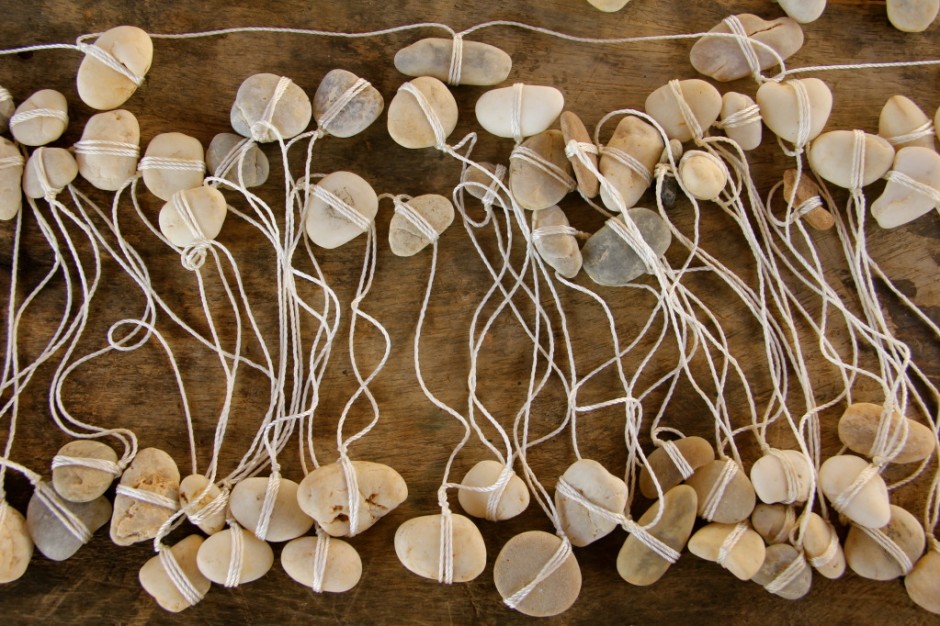 The Wayuu use materials from the desert to make traditional tools and ornaments like this decorative net of pebbles. Wayuu men and women spend hours carefully weaving these beach and desert stones together to add texture to their homes. 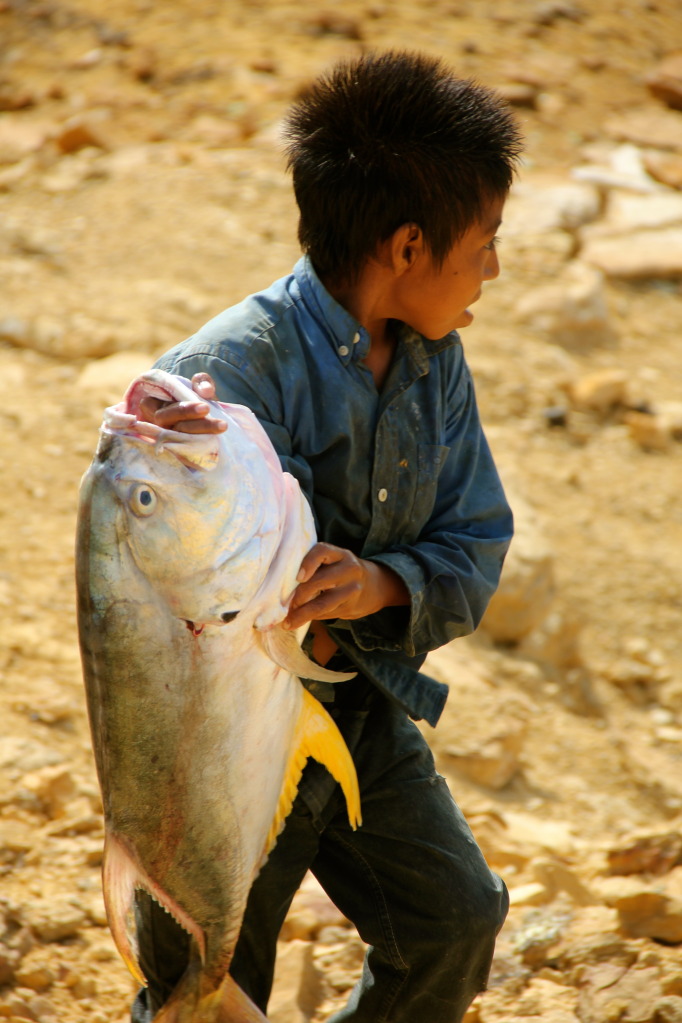 As there are few options for farming or hunting on land, many Wayuu look to the sea to make their living, and fish is served at any time of day. Here, a young boy brings in the first catch of the day after the morning’s outing on the Caribbean. 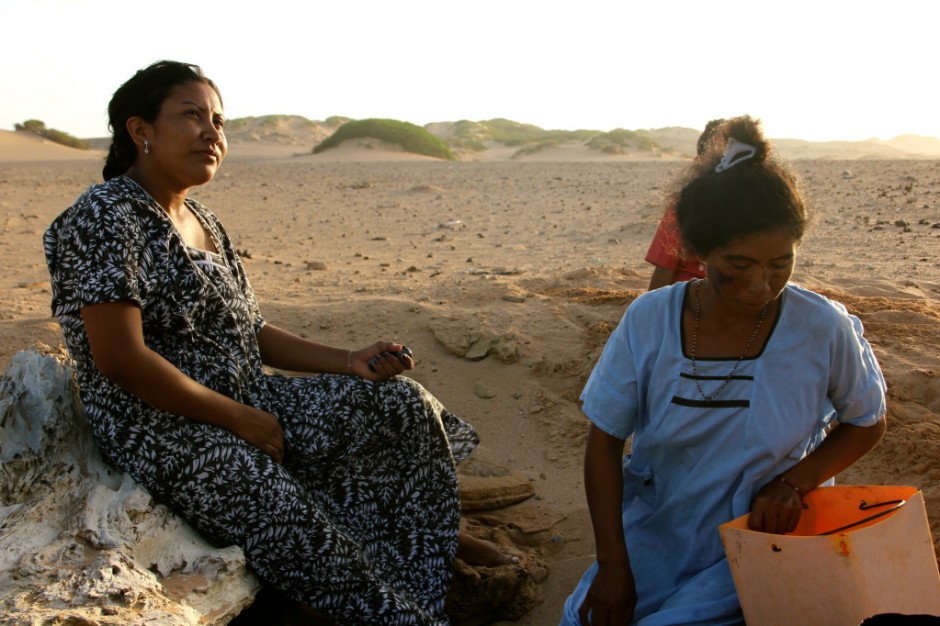 Electricity and running water are services to which many in Punta Gallinas still don't have access. Here, two women collect water from one of the area's springs, one of the few sources of freshwater that doesn't have to be imported. 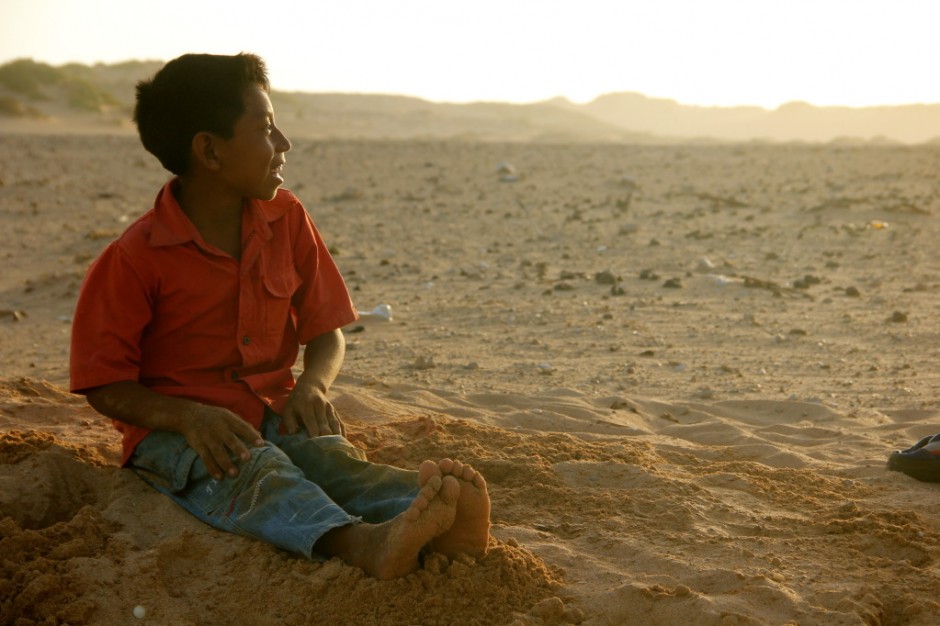 End of the day 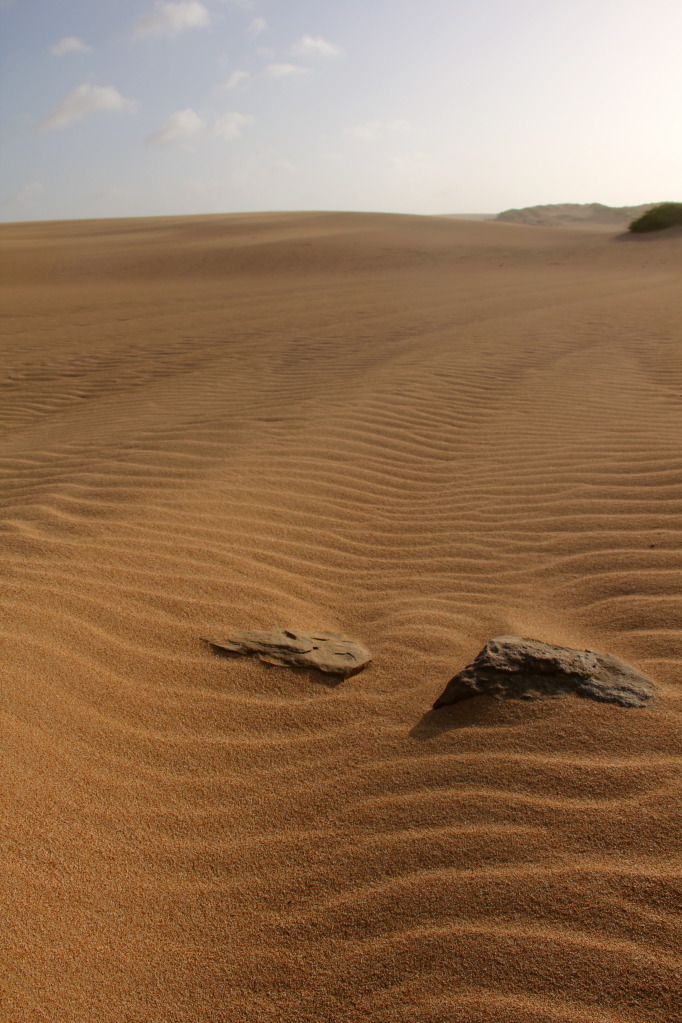 The trek to Punta Gallinas isn't for everyone, due to the lack of tourism infrastructure. But although it may not be the most comfortable or convenient trip, seeing the La Guajira desert and its people was worth it for me.