LOOK AT A MAP — study the geography — of South America’s smallest nation. The country is like an island; it isn’t connected to any other by road. To the east and west, Suriname is caged by rivers, to the north by the Atlantic, and to the south by the Amazon Rainforest.

Around 80% of the map is green: rainforest, sparsely dotted with Maroon and Amerindian villages. Blue, twisting lines dissect the land, hugging brownish mountain slopes, sometimes doubling back on themselves before joining another, larger blue line. After many twists, the by then mighty rivers meet the ocean. In reality, the waterways aren’t blue at all but rather ochre, chocolate brown, or inky black.

To travel overland to French Guiana (east), you cross the Marowijne River. Coming from Guyane (west), the Courantyne River marks the border. To penetrate the rainforest, your dugout canoe must plod upriver for hours, past the point where the roads stop.

All this is to say, the best form of transportation in Suriname is a boat. And so that is what we used. 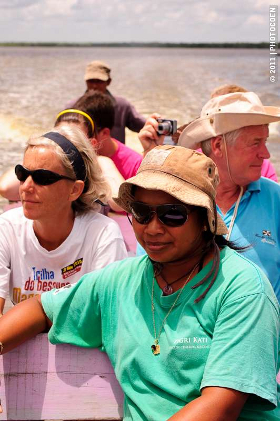 Taking a boat to Bigi Pan

TRIP 1: To the nature reserve of Bigi Pan

In the far west of Suriname, a four-hour drive from the capital Paramaribo, lies Nieuw-Nickerie. This town is a convenient base from which to explore Bigi Pan, a 235,000-hectare protected area of lakes, forests, and wetland and a rich habitat for fish and birds.

I arranged the boat trip through our guide, Stephanie. She didn’t answer the phone when I first called, but half an hour later mine rang. “Hello, this is Stephanie. Did you just call me? I had a missed call on my cell phone. I was in Bigi Pan, where I don’t have a signal.” This simple act of returning a missed call says everything about Stephanie’s devotion to her work.

From Nickerie to Bigi Pan

Two days later we met at our hotel in Nieuw-Nickerie, drove 10 minutes east of town, and boarded her open aluminum flatboat with wooden benches. We set off along the Nickerie River and, 10 minutes downriver, pushed the boat over a ramp into the 8km Jamaer Canal, which was dug in 1853 to open up Bigi Pan for commercial fishing.

The canal is hemmed by forest and black mangroves, their trunks and roots forming high vaults and arches. Extensive stretches of short parwa roots protrude from the mud. They offered camouflage for a baby caiman, which was nevertheless spotted by Stephanie’s trained eye.

Buzzards and black hawks scanned their territory from the canopy, and kingfishers nosedived into the stream, surfacing with one fish after another. Beyond a ribbon of trees stretched a shallow lake, dominated by silver herons, egrets, and spoonbills.

The canal opens onto Bigi Pan, the largest lake of this natural area that has been nominated as a MUMA — a Multiple Use Management Area (pdf).

“Bigi Pan is a protected area and MUMA means that hunting is allowed only during parts of the year and only for certain animals such as ducks. Private fishing is allowed but commercial fishers need a license,” Stephanie explained. 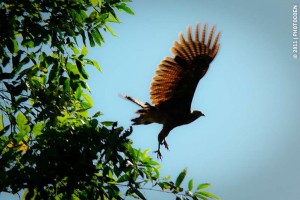 Bird of prey in the Jamaer Canal to Bigi Pan

We stopped at one of the two open houses on stilts in the middle of the lake. They’re used as lunch stops, which is what we were doing, but they double as guesthouses where you can hang your hammock for the night.

After a meal of rice, kouseband, and fried fish, the boat trip continued through the surrounding wetlands, where protruding grey, bare trunks are a reminder of the forest that not too long ago covered the area. Fifty years ago, extensive drought resulted in the salinization of the water; the trees didn’t last long after that. Depending on the tide and time of year, there is either lots or hardly any water here.

It was a clear afternoon, with the sun beating down, but I imagine that during the early morning hours, when mist still hovers over the water, this must be an ethereal world. The way to find out would be to spend the night at the guesthouse, which I’ve added to my to-do list for next time.

Our next stop was on land, up along the Atlantic coast, where we climbed over a dike for a stroll on the beach during low tide. The swampy soil makes for a rich feeding ground for waterfowl. Stephanie recommends visiting in November, when the eye-catching scarlet ibis abounds. 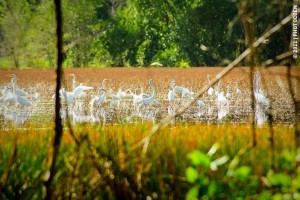 Birds along the Jamaer Canal

Returning to the lake house, our boatman stopped at regular intervals to take in fish. On our way out to the beach, he had dropped nets at various spots where Stephanie saw the movement of fish, and during the intervening hours, dozens had been snared, among them colossal trapung and tilapia. Our tour ended with us snacking on crab and more fried fish.

Next Page
Tagged
Insider Guides Suriname
What did you think of this story?
Meh
Good
Awesome

US Citizen Guide To South American Visas and Reciprocity Fees