THERE, I’VE SAID IT. I always find myself coming away thinking they’re all the same. You’ve got your sun, sea, sand, sex, UB40 and Bob Marley, coconuts, bananas. Seen one, seen ’em all.

Actually, I mostly just end up extremely sweaty, sun lotion and sand clouding my vision. But I managed to find something more than my usual pessimism. And as I write this from a small wooden boat bound for an equally-small remote Amerindian village in the Guyana jungle, there’s a little part of me that wishes I was back in Costa Rica and Panama, scoffing at the boardshorts but nonetheless capitvated by the weightless gravity of a deserted beach.

Sent from my iPod. 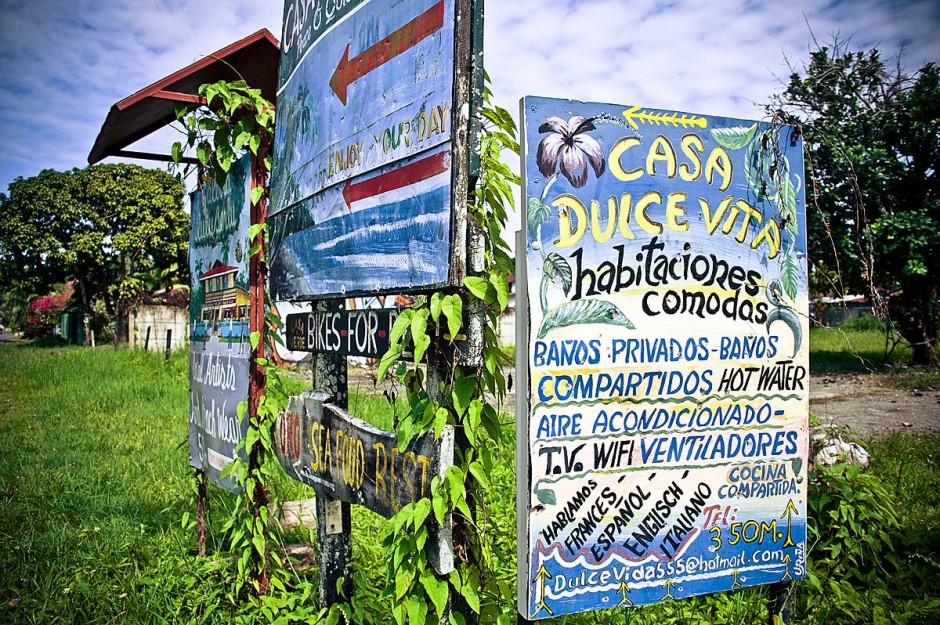 According to Wikitravel, Puerto Limon is "popular with surfers and backpackers." The first thing I noticed were these giant hand-painted signs all over the place, which seemed to confirm the site's synopsis. It's strange, though - despite the fact that pretty much everyone uses the internet to book their rooms, these signs somehow underscore the laid-back atmosphere that somehow fits the surfers and backpackers scene. Even though all these places had wi-fi, I guess they still like to keep a semblance of "off the grid-ness." 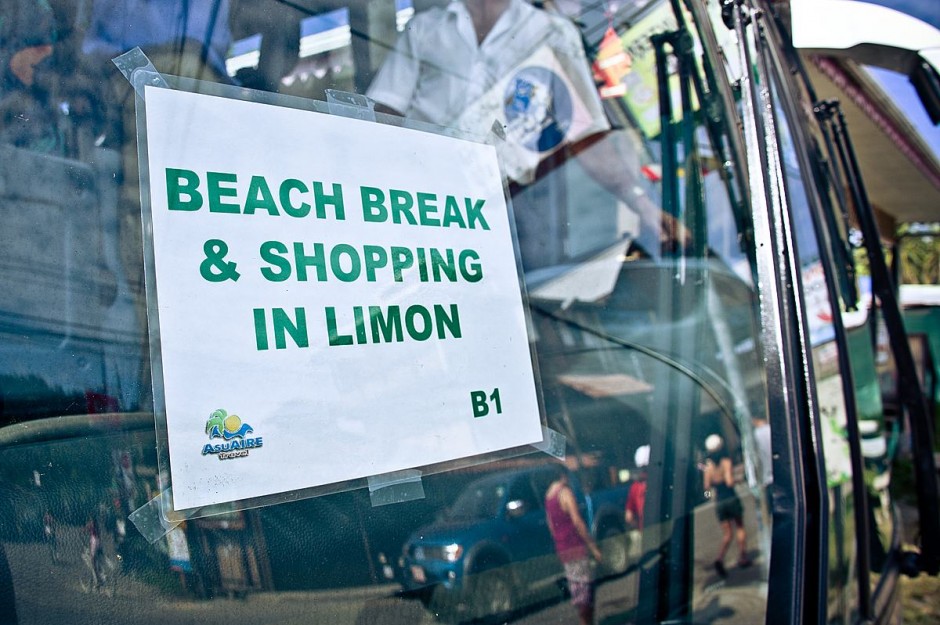 I took a bus from Costa Rica's capital San José to a remote corner of the country: Puerto Viejo de Talamanca. I'd read that it’s nothing but "Clear water, coconut palms, great surf and a laidback Caribbean atmosphere…framed by jungle, turquoise seas, banana plantations and scenic rivers." As it turned out, it’s actually a compulsory shopping stop for guided tours en route to Panama. 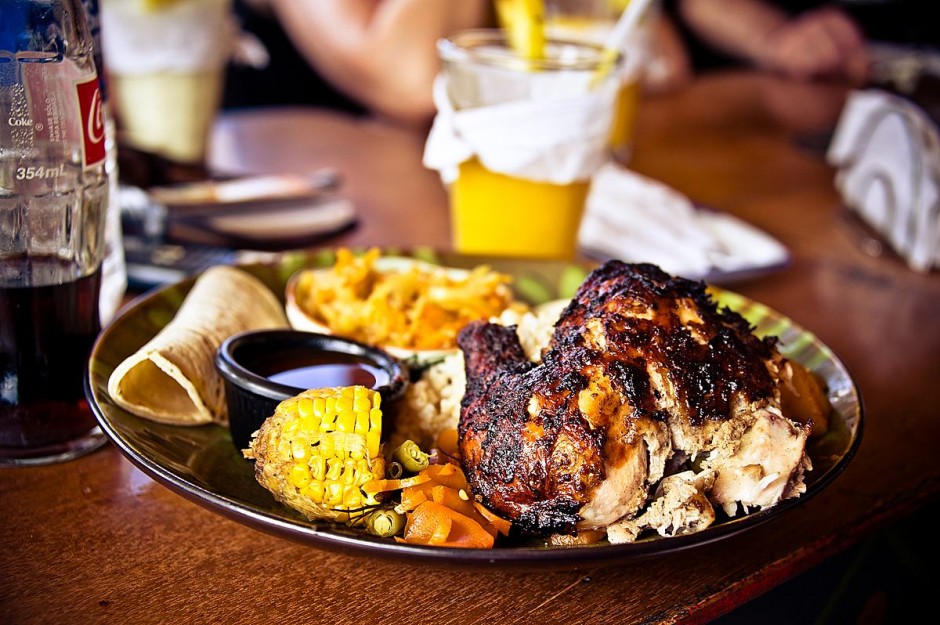 Away from the crowd in Puerto Viejo, I followed my group into a quiet street. We stopped at what looked like a closed pub: benches upside down on the tables, dark and smelling of stale beer. However, a door was open and in the far corner were saloon-style doors giving way to narrow stairs that took us to a back terrace. Here, the wind was light, the service slow, and the barbecue incredible. Guidebooks have no conception of back rooms. 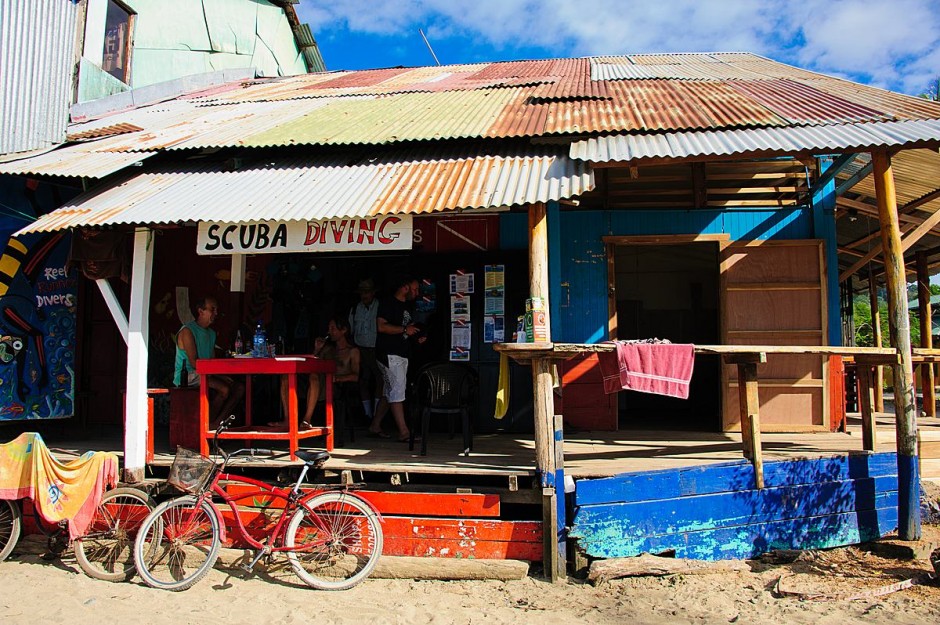 Just off the beach, I found this wooden, patched up hut masquerading as a dive shop. Two guys were taking breakfast while members of our group were checking out tours on offer. My last diving experience had ended with a perforated tympanic membrane, so I wasn't keen on anything too deep. Instead, I contemplated the structure, clearly built on the fly without any architectural considerations. I particularly fancied the patchwork roof with sheet metal in dissimilar sizes and ages contrasting hard against the blue sky. 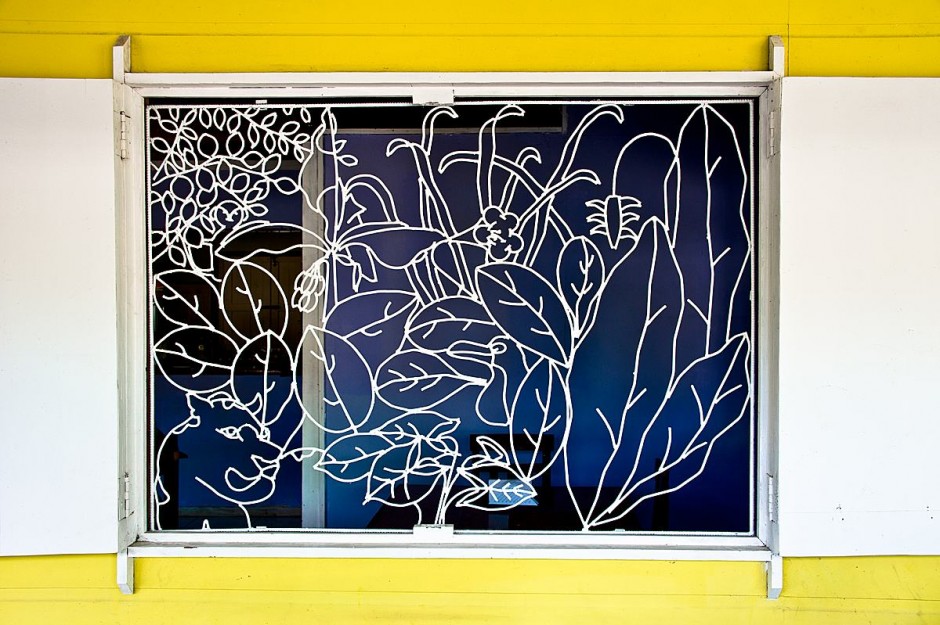 In Latin America, barred windows are a common solution to maximize airflow while providing protection. Puerto Viejo didn't feel dangerous in any way, but burglary seems like an integrated, almost accepted, part of life on this continent. When locals talk about it they tend to shrug their shoulders with a "Yeah, it happens," and move on. The normalcy seemed most evident in this filigree ironwork that beautifully combined form and function. 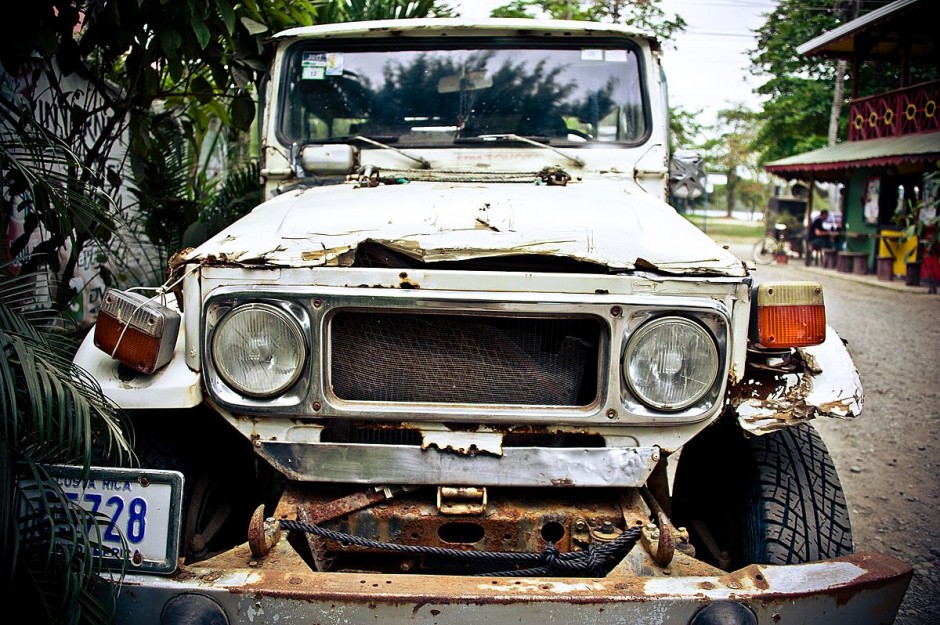 Although growing up I was enamored by sports cars, from the moment my wife and I started driving our old Land Cruiser BJ45 around the world in 2003, my gaze has shifted towards these mostly rusted, trusted friends. You see them everywhere once you start noticing its distinct bezel, fenders, and huge bumper sticking forward a foot or so. Initially, I thought that this was rotting away, but a closer look at the excellent tread on the tires gives it away as a daily driver. 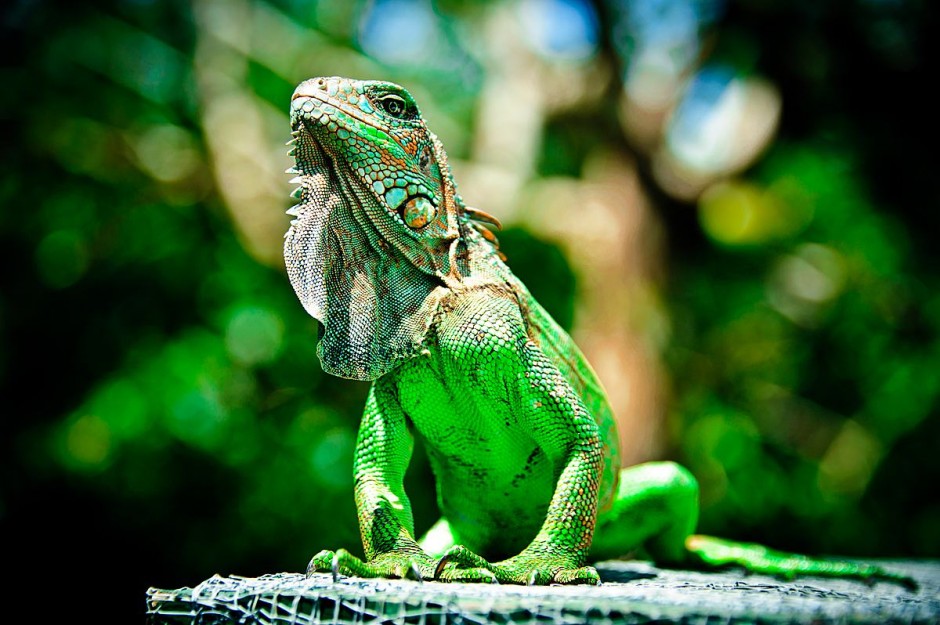 The chicken of the trees

They call iguanas 'chickens of the trees' down here, and they've been eating them regularly for 7,000 years. Recent environmental degradation and overhunting brought the species to near extinction, though. This juvenile iguana, proudly sitting atop a cage full of newborns at an iguana rescue center, was just stretching before getting in another position to sun himself. 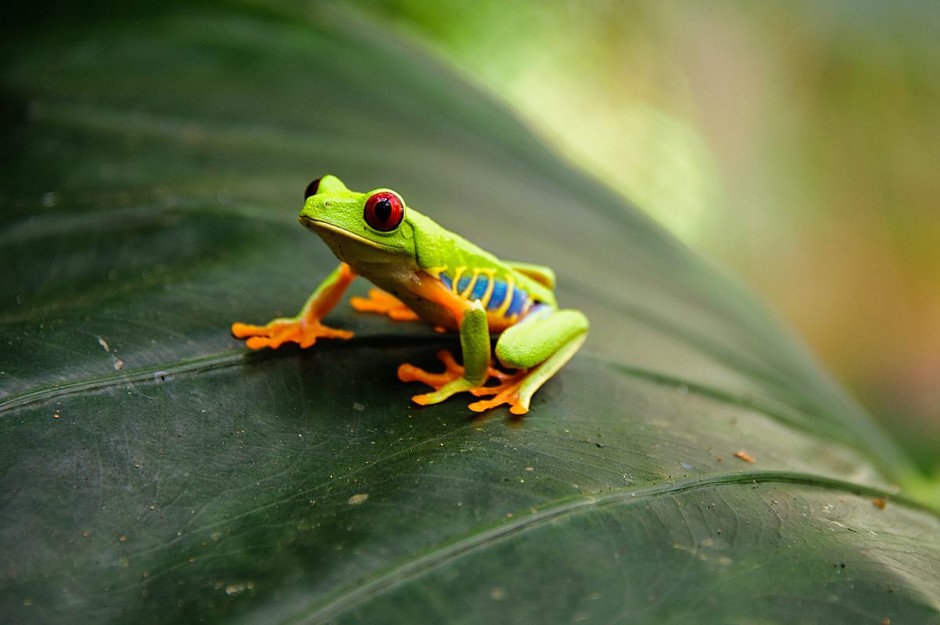 Normally, you need to point a strong flash towards an eye to cast a red shine over it. In the case of this frog, though, these red eyes are natural. This nocturnal fellow sleeps during the day, and I gently woke him up for just a moment. As it turns out, he's got three eyelids: two outer ones and a third, transparent one functioning as goggles. The latter protects the eye but still allows the frog to see underwater. 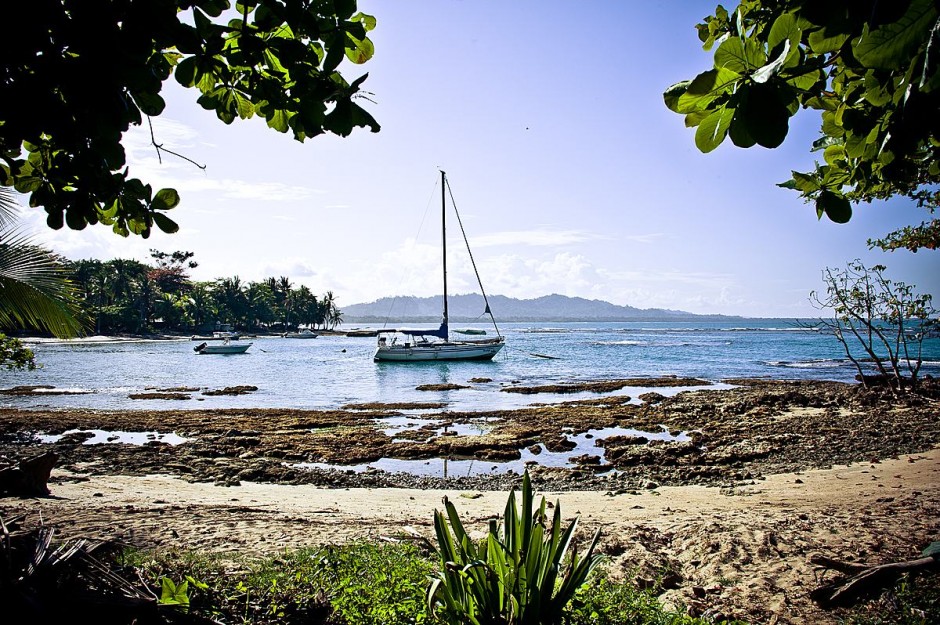 Costa Rica gets plenty of rain, but during hurricanes functions as a natural safe harbor for yachts. Storms are born in this zone, yet only gain force and power as they move north. I wonder if this sailboat, resting in a perfectly protected natural harbor surrounded by reefs, just outran a tropical storm - potentially some Caribbean pirates, which do still exist. 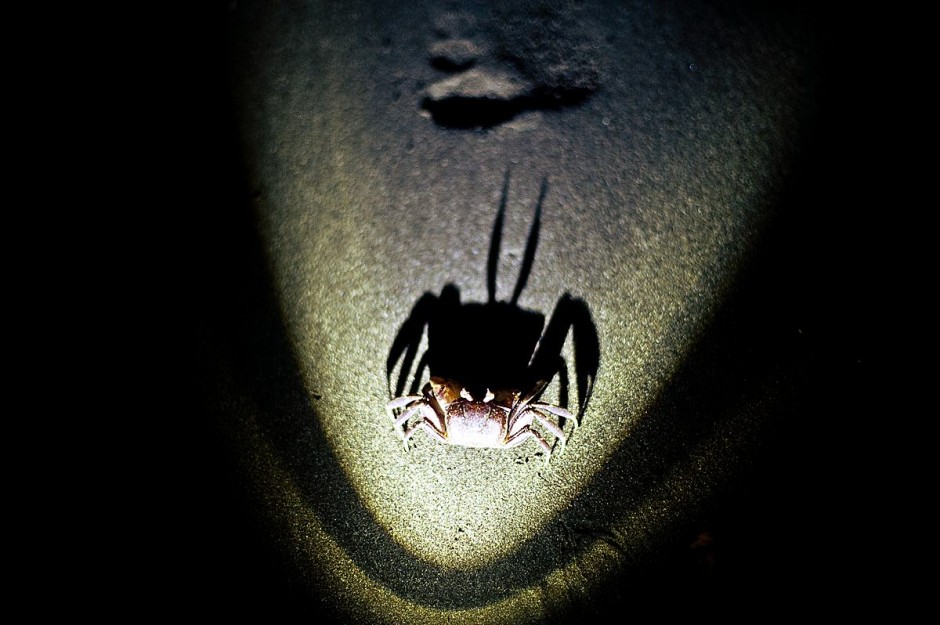 The moon had risen; with the receding tide it was difficult to find the harder parts of the sands to walk on. Although there were no other people around me I had the distinct feeling I was not alone on this deserted beach. When I switched on my powerful little LedLenser torch, a large crab with funny eyes on sticks froze in the captured beam. During the day I saw tons of them, walking sideways, but it was a strange moment, just him and me. I lowered my torch, instantly doubling the shadow of the crab, turning the creature into a comic superhero while it kept a sharp eye on me, clueless of its momentary power. 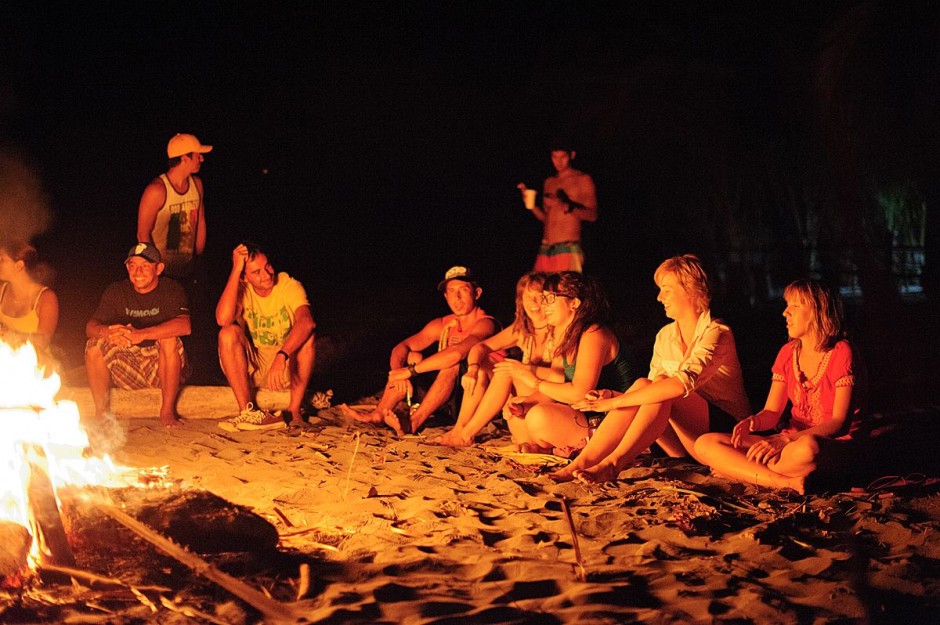 I simply knew we were going to have a campfire so I had been carrying a pack of marshmallows with me for the last couple of days, which was an instant success. One of the guys started playing Bob Marley and UB40 songs on his guitar and things got lively. Although the picture looks like a very classic, kumbaya campfire scene, just know that there was probably a laptop blasting hardcore techno. 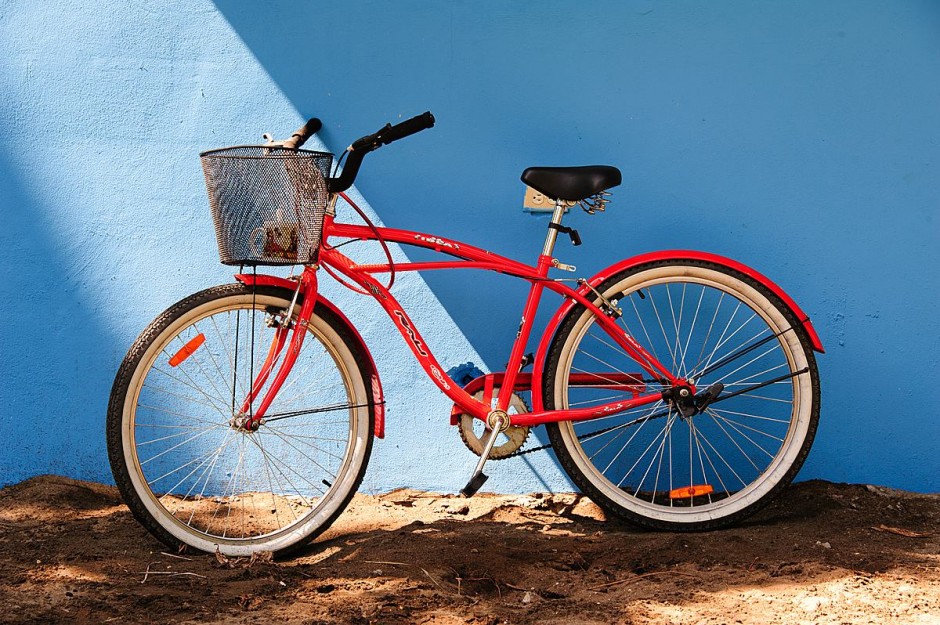 Being from the Netherlands, I am not particularly impressed by the Barbie bicycles I see over here. For one, they're obviously not designed for the average sized European. Secondly, they lack a sturdy cargo rack or passenger seat on the back--it's in the front, which makes for quirky steering. And why would they put reflectors in the spokes, if it never was intended to go out in the dark? 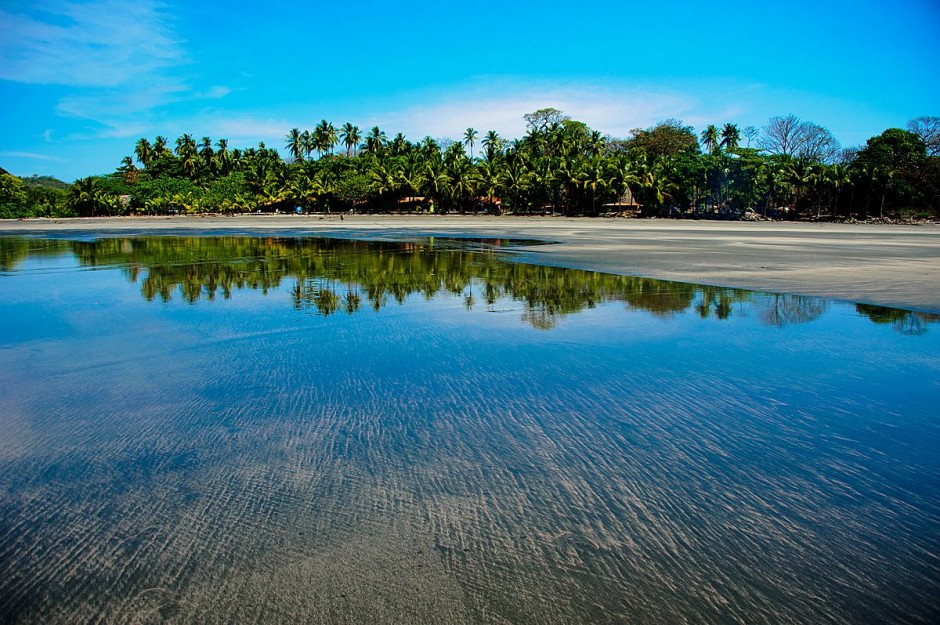 Our dragoman warned us we'd need to wade across a river while holding our luggage above our heads. I expected this to be a scam where we'd have to hand some dollar bills to a conveniently-placed friend to carry it for us. Nothing of the sort happened. We arrived at the so-called "wild river," a thin layer of smooth, mirrorlike water and the bus driver splashed through in three seconds. "Luckily it's low tide," he smiled. 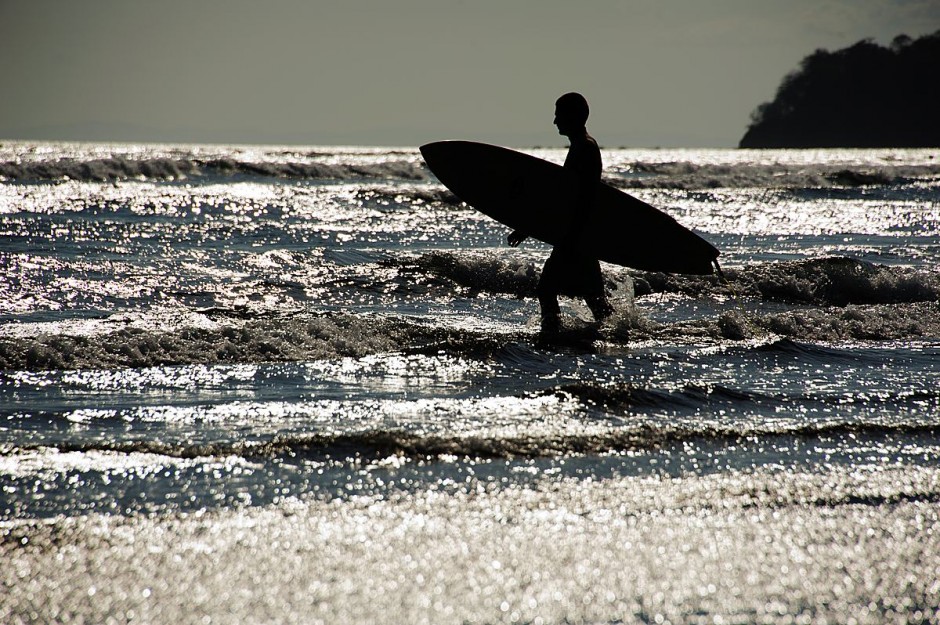 Apparently this particular beach was one of the best surfing spots in all of Central America. The whole day I watched surfers dragging boards through the surf to enjoy the endless supply of waves, and during low tide some cars ventured on the beach sporting boards on the roof. I got excited and ran out to play with the white topped waves. I got owned.