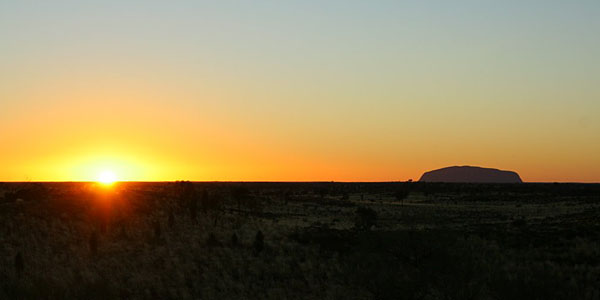 A proposal by Australia’s National Parks may lead to a ban on climbing Uluru within the next 10 years.

IF YOU’RE THE KIND of traveler that likes to defy danger and the wishes of the local indigenous people, then you’d better get your butt Down Under real soon. If the National Parks and the Anangu people of the Western Desert have their way, it will be illegal to climb this famous Australian landmark. 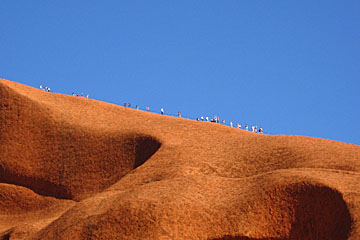 Less is still too much

As it is, there are heaps less people making the climb than before. In 1990, three-quarters of visitors reached the 340 meter peak, whereas today that ratio has shrunk to just one-third.

But that still translates to 250 people per day. 250 more than the Parks and the locals would like to see up there.

Besides the cultural sensitivity issues, it’s a dangerous climb. To further deter tourists from attempting it, details of more than 30 deaths await you at the base.

There are also sanitary reasons why you shouldn’t do it. A lack of toilets on the sacred rock mean that some hikers are damaging the local environment as their waste runs down into the waterholes around the rock.

Not only is the Federal Opposition party opposed, but Prime Minister Kevin Rudd rejects the proposal:

Obviously it’s a question of public safety and managing important parts of our natural landscape…I think it would be very sad if we got to a stage though where Australians and frankly our guests from abroad weren’t able to enjoy that experience…to climb it.

However, there is no shortage of folks who are fully behind the idea of an outright ban, including many tourism operators. Ultimately, the decision may rest with Environment Minister Peter Garrett, the former frontman of politically charged Midnight Oil.

Mr. Garrett has never himself climbed Uluru, instead saying he’s respected the sign at the bottom placed there by the traditional owners, which states “Please don’t climb Uluru.” Although his preference is clear, he wants to make sure the correct decision is made:

There should be a debate amongst the stakeholders: the tourism industry, indigenous people, governments and others.

Have you hiked Uluru? Would you do it despite the request from the local aboriginals to refrain?

What did you think of this article?
Meh
Good
Awesome
Bookmark
Posted In
Parks + Wilderness Trip Planning
Destinations
Australia

A rare purebred dingo was found in Australia, and could help save the species