So you’ve arrived in Calgary for the 10-day spectacle that is the Stampede. Good on you — expect little sleep, much partying, and a sudden fascination with the rodeo. It’s important that you look the part…. You’ll need boots.

Head over to the Alberta Boot Company, which has been kitting out everyone from cowboys to accountants for over 30 years. Polished leather protects you from rain, mud, snow, or the muck you’ll probably find yourself wading through at the end of a night at Nashville North. It can take a week to break them in, but once the leather molds to your foot, there’s not a pair of footwear you’d rather take on an intergalactic space cowboy mission. 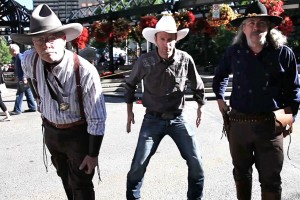 Next, shuffle over to Smithbilt, the official hat maker of the Stampede. Happy customers include world leaders like Vladimir Putin and movie stars like Kevin Costner and Tom Selleck. Smithbilt makes the Calgary White Hat, the official hat of the city, seen everywhere during Stampede.

Jeans are staple clothing, along with a cowboy shirt, with snap buttons that come in handy during fits of heated cowboy passion. Belt and buckle complete the ensemble. Live in it. Break it in, like an angry filly. Ignore the blisters, and the occasional feeling you’ve stumbled into a Halloween party.

When in doubt, say “Yahoo!” and not “Yeehaw,” which will quickly identify you as a term — a word that, incidentally, has its origins in cowboy slang for a greasy city slicker. Don’t be a dude. Be a Cowboy.

Every morning, head over to Flour Rope Square for the free pancakes, served from the back of a chuckwagon, typically by men who could grind you with their stares. Hop on a wagon for the daily flit about downtown, waving at the passersby, and the folks unlucky to be caught in traffic.

You’ll make your way to Stampede Park, participate in some challenges along the Midway Carnival, maybe catch a dog show, or the rodeo. Pop into the agricultural exhibits to pet some miniature horses (don’t confuse them with the ponies, trust me), milk a plastic cow, and chat with one of thousands of volunteers who make the Stampede happen.

You might catch a human cannonball, or the eye of a cowgirl. Grab a bite in the Big 4, a powwow at the Indian Village, and a Ferris wheel ride to see just how big the Stampede grounds are.

Before long, it’s getting dark, and the chuckwagon races are heating up. Place your side bets, and settle in for the Big Show, which features the largest mobile stage on the planet. Conduct the fireworks exploding overhead, as you head over to Nashville North or Cowboys, where the night’s just beginning. Don’t forget to make friends in the lineup.

You’ll trudge back to your hostel or hotel, barely have time to kick off your boots before face planting on your bed, fully clothed. Wake up at 8am, and head over to Flour Rope Square. For some reason, the country band performing onstage this morning sounds particularly good. The bacon pancakes are life vests for your liver. Meet some friends, and head over to Stampede Park. And so it begins, once again.

The wildest pavilions on display at Expo 2020 Dubai right now
The 8 best movies and shows to watch before going to Paris
5 must-visit music venues off Nashville’s main drag
Every roller coaster at Cedar Point, ranked
American Airlines tells Olivia Culpo to ‘put a blouse on’ before boarding her flight to Cabo
✖
travelstoke
Download the mobile app
stoked by