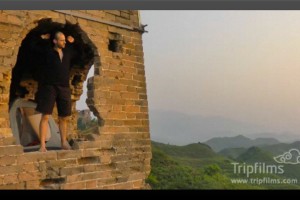 Mike Corey wakes up on the Great Wall. Photo by Photo by Mike Corey

For Mike Corey, of Kick the Grind TV, the answer is to sleep in the thing. While the video doesn’t show exactly were he set up camp, it does show that, for as far as they eye can see, there are no people. After looking at all of the pictures of the wall teaming with tourists, it’s interesting to think of one of the largest human-made structures as a piece of wilderness. Without people, the wall is like a wide backcountry trail with great views. Is it possible to backpack its entire length? The terrain, alone, might be enough to halt hikers in their tracks, traversing portions of the Gobi desert and some steep mountainous regions. It is the paperwork, however, that might pose the most serious challenges. The wall passes several military bases and other areas sensitive to China’s government.
So, if you had the Wall to yourself, what would you do? Hike its length? Massive traverse bouldering problem? Suggestions?

Video created by Kick the Grind.
Tagged
Camping China
What did you think of this story?
Meh
Good
Awesome