I’ve been to Namibia, Botswana, South Africa, Zambia and Egypt, but as far as other African countries, Tanzania has been high on list for years. In late September I finally got the chance to go, and from the abundance of wildlife to the way the morning sun transforms the landscape, I had countless jaw-on-the-floor moments. Here are my top ten. 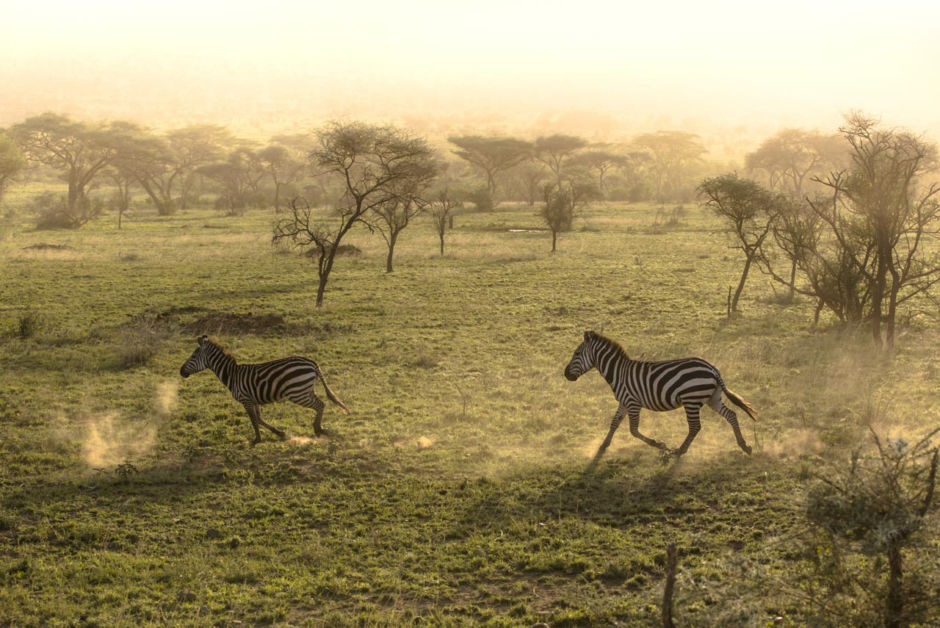 Magic dust and zebras on the move

The Serengeti is a place where all of your senses are fully engaged. Creatures you might have only seen previously in dreams will appear right before your eyes, and this will happen so many times, it’s hard to believe that there isn’t some sort of magic rooted deep in the land. These zebras were on the move right as the sun was dropping, and after stopping to check out our Land Cruiser, they trotted off to catch up with the rest of their herd. 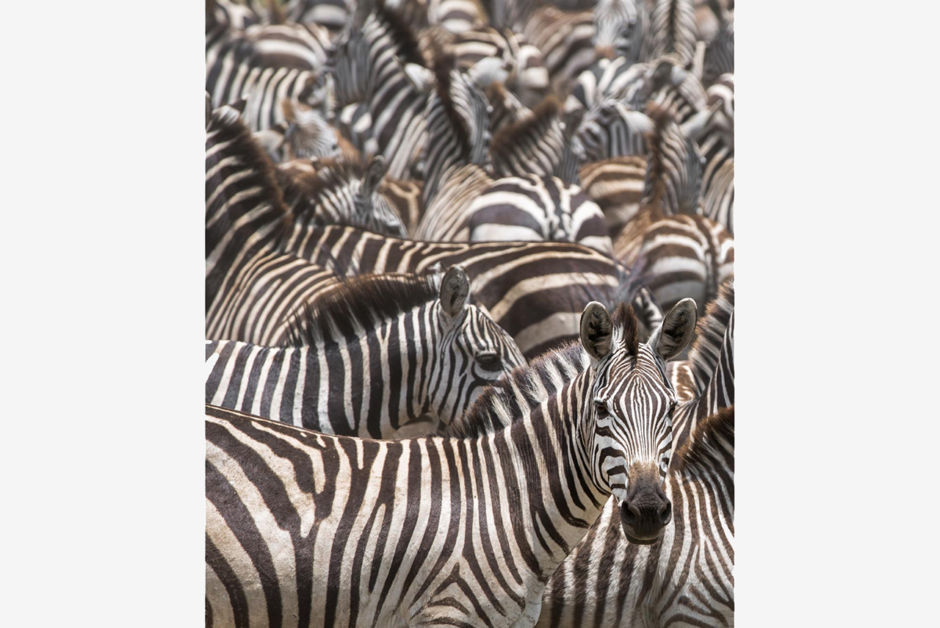 A sea of stripes

You can call it a “herd” or a “zeal,” but the fact that “dazzle” also refers to a group of zebras is one of those things that will always make me smile. They bray like donkeys and huff like horses, and they can be quite moody, as we saw several nip and kick at others in their group. 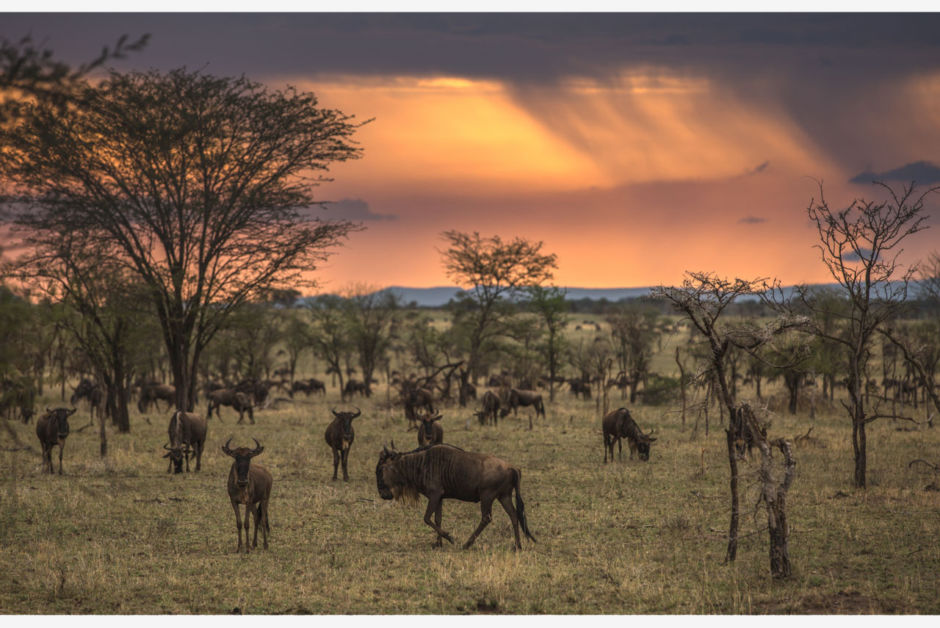 When we landed at the Seronera air strip, we had flown through a dust storm and a rain storm, and about an hour later, the horizon began to turn peach and pink behind the storm clouds. We saw what seemed like thousands of wildebeast moving across the savanna, and this was just the beginning of our adventure. 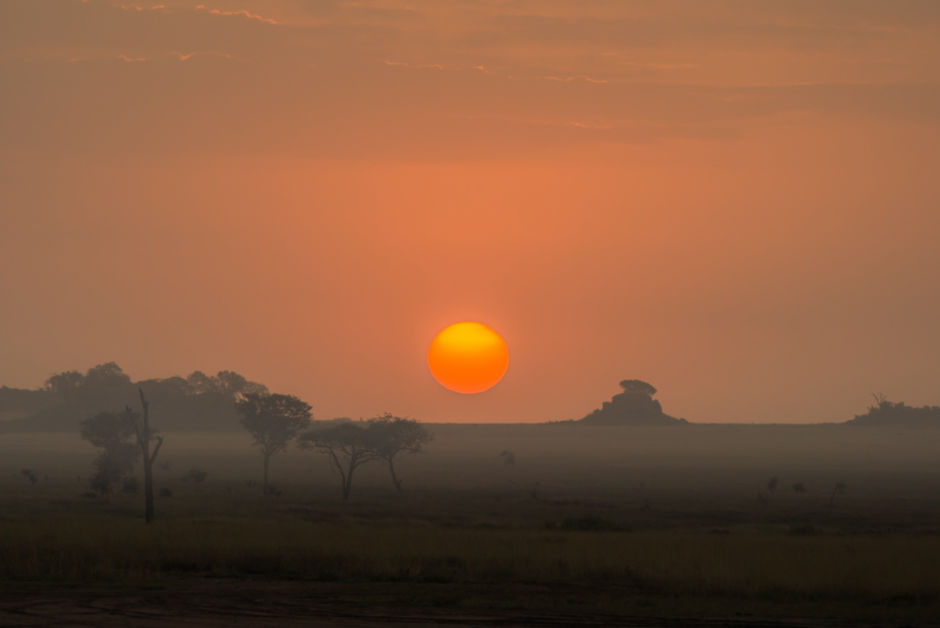 The glowing ball of orange

When I describe the landscapes in Africa, I always refer to a “glowing ball of orange” to describe the sun. Not only does the horizon seem endless, but the size of the sun will truly render you speechless. 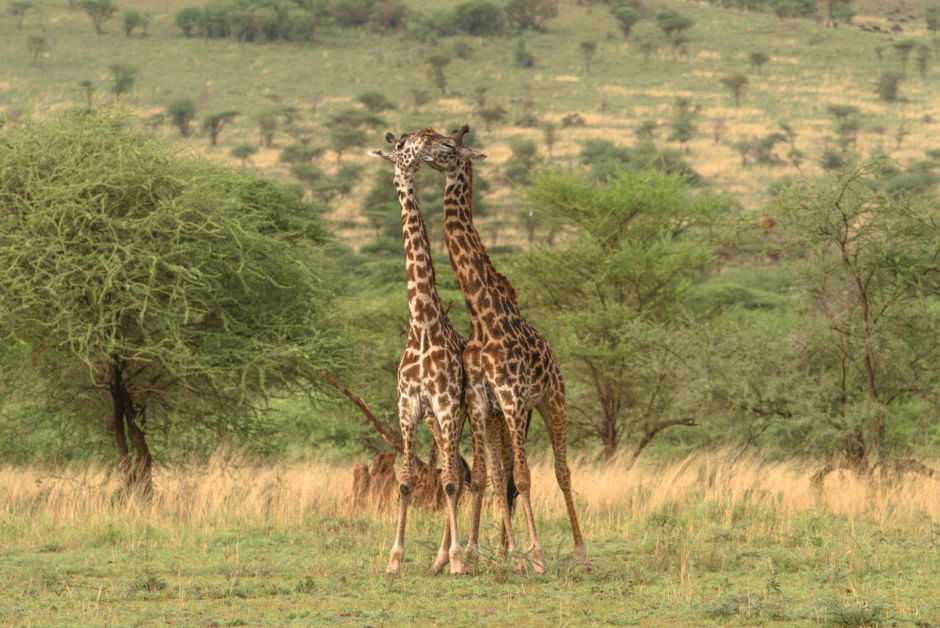 That two-word dad joke had our entire safari car howling with laughter, but our giggles quickly ceased when we watched this pair of giraffes playfully battling it out. From body checks to neck twists, they couldn’t stop making contact with one another, but it didn’t seem the least bit aggressive. 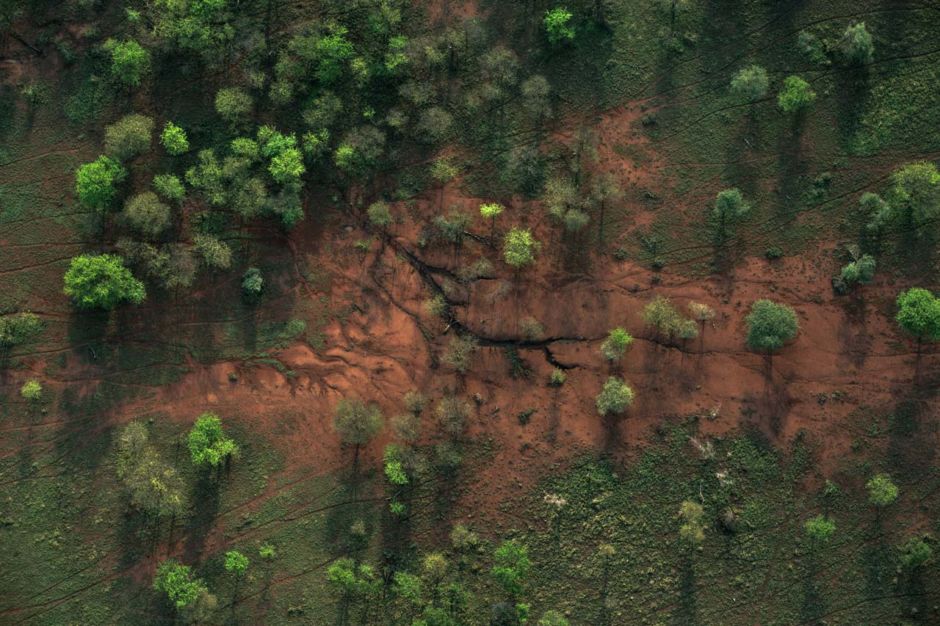 I had never been in a hot air balloon before, and I was not sure what to expect. Would I need a motion sickness bag? Was it safe? What would we see? We had a birds eye view of everything from an impala giving birth to the network of creeks and streams that would soon be filled with water, and with that water, even more life. This aerial view of the landscape is one of my favorite shots from the hot air balloon ride, which felt more like floating than flying. 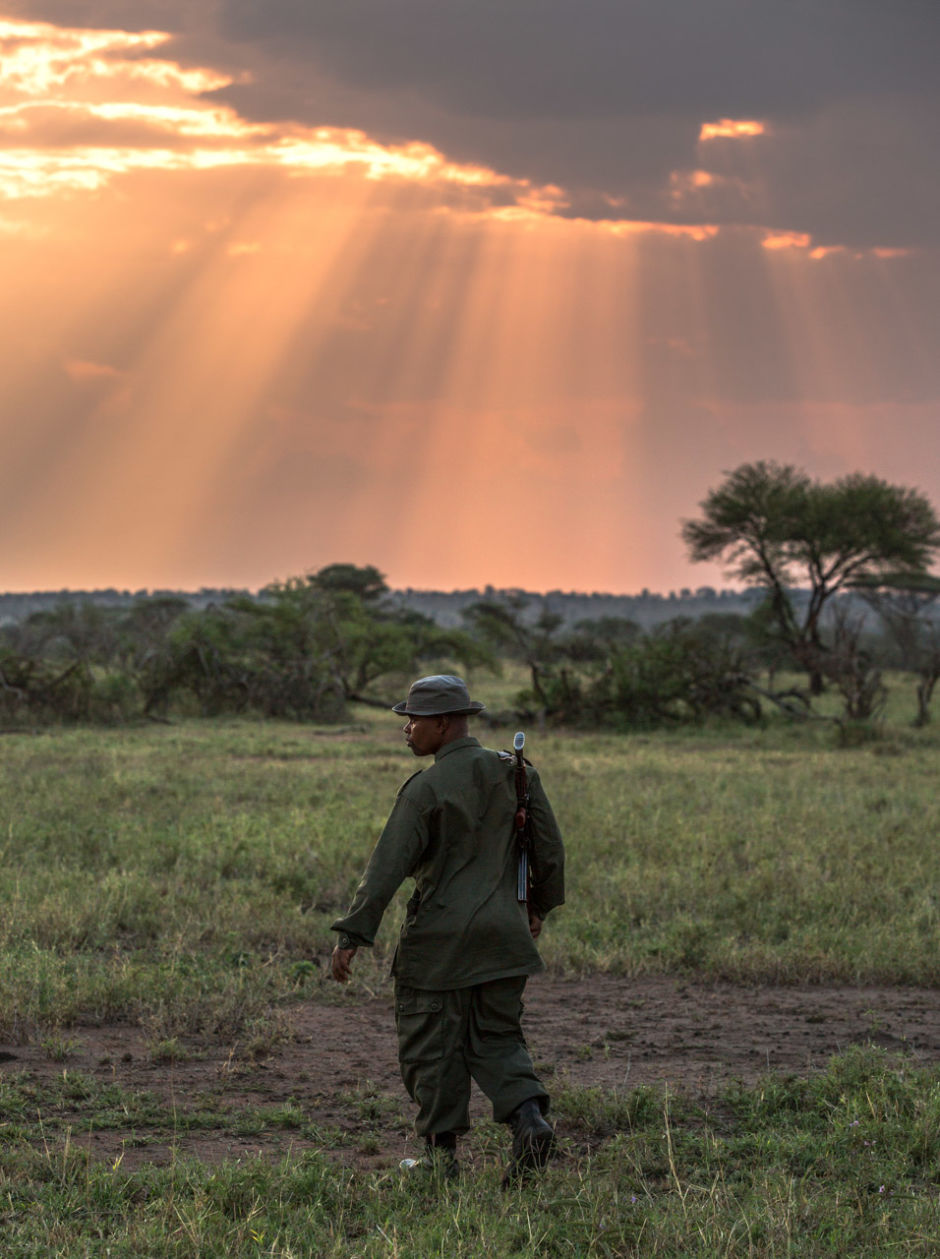 Exploring the Serengeti by foot

Much of the wildlife we saw was from the comfort of our massive Land Cruiser, so getting to explore the park with a bush walk was quite a different experience. To our right, a dazzle of zebras gazed at us curiously as we made our way across a plain, and to our left, we saw a herd of elephants in the distance. Of course, the best view was right in front us, as we watched the last rays of the day shoot out from behind a massive cloud on the horizon. We were accompanied by a member of the Maasai tribe, along with two armed Serengeti National Park rangers, who were constantly on the lookout for wildlife, large and small. 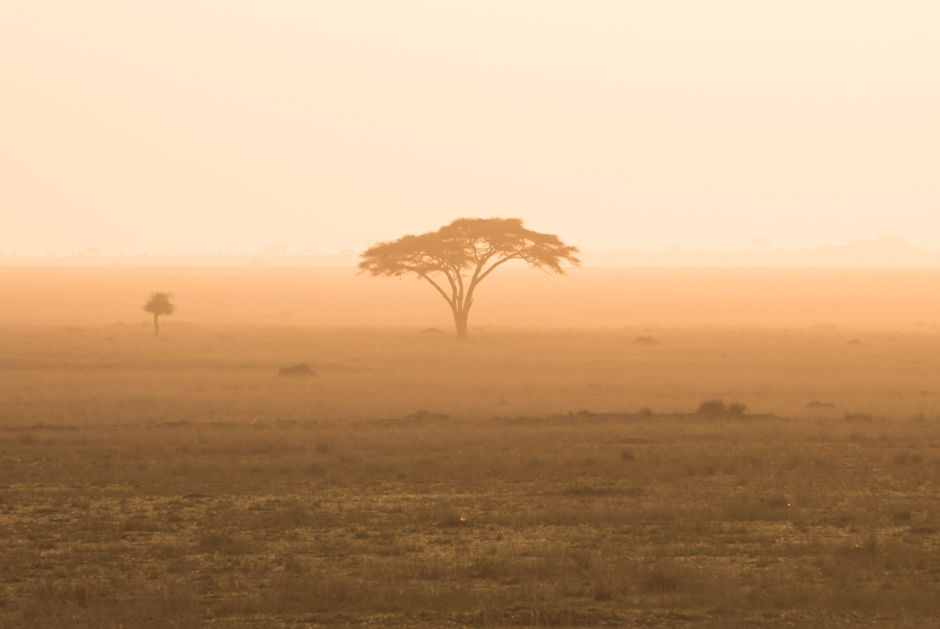 You haven’t seen a sunrise until you’ve set foot on the African continent. I barely had to edit this photo, so that should give you an idea of how much golden light pours over the Serengeti at 7am. And I’d love to hear some of the stories this lone acacia tree could tell… 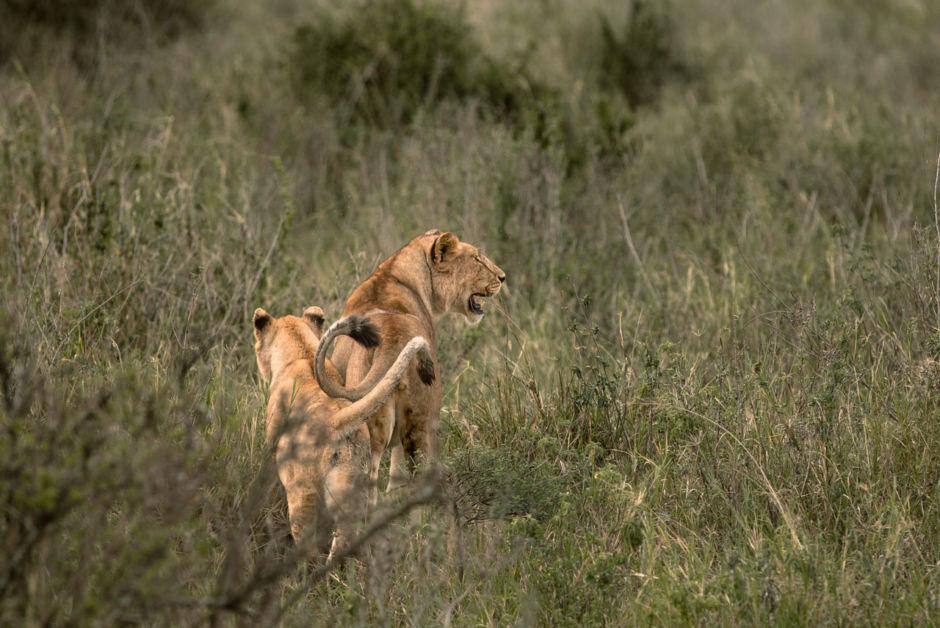 Big cats are the best cats

They’re fully capable of ripping other animals to shreds, yet the way lions snuggle up to one another shows a surprisingly softer side. This mom and cub emerged from underneath a shaded bridge on the road, and after scanning the landscape, they disappeared into the grass within a matter of seconds. While lions are at the top of the food chain, they can still fall victim to poachers, and I was happy to learn that a number of hotels and tour operators in the park, including the Four Seasons Safari Lodge, have become founding members of the Frankfurt Zoological Society's Serengeti De-Snaring Program, which helps reduce the amount of snare traps set up in the park. Before traveling to Tanzania, I had no idea that this kind of poaching existed, but it’s a major problem in the region. Since the launch of the Serengeti De-Snaring Program this spring, over 7,000 snare traps have been removed, and if more anti-snare teams are mobilized, this number will only go up. The snares are intended to illegally catch game that can be harvested as meat, but the wires also trap and harm animals like elephants and lions. 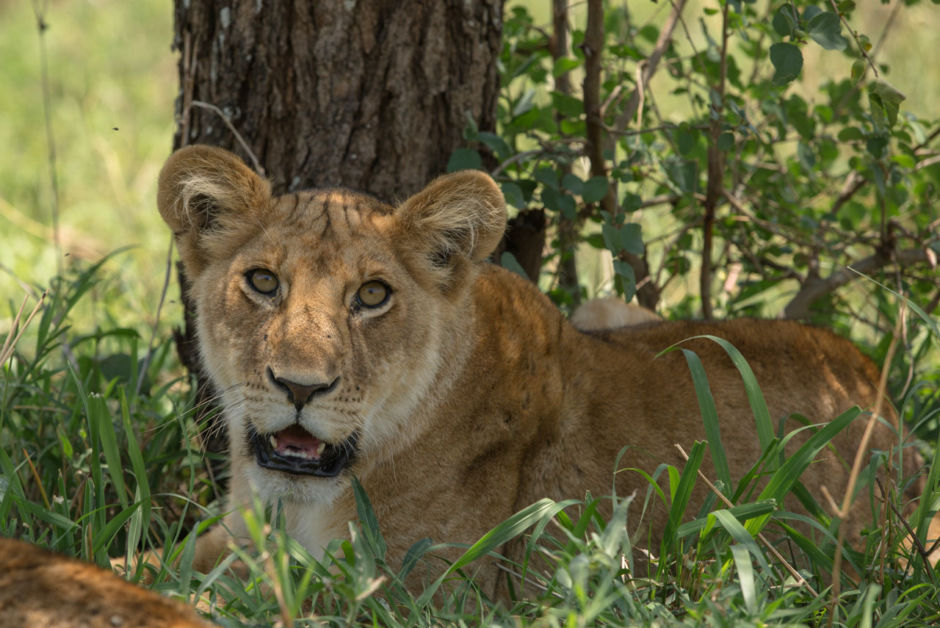 We stumbled across a pair of one-year-old lion cubs and their mother, who was desperate to grab a meal for her offspring. While mom tried her best to take down a zebra, the cubs sat under the shade of an acacia tree, patiently waiting for her to return. She didn’t come back with dinner, but she did give them each several affectionate nudges with her head before plopping down to rest.

Note: Elisabeth was a guest of the Four Seasons Safari Lodge Serengeti.

Lux TravelAfrican Safari Perfection: A Look Inside Singita’s Resorts in Kruger National Park
Tagged
Tanzania
What did you think of this story?
Meh
Good
Awesome

On Witnessing a Maasai Circumcision Ceremony