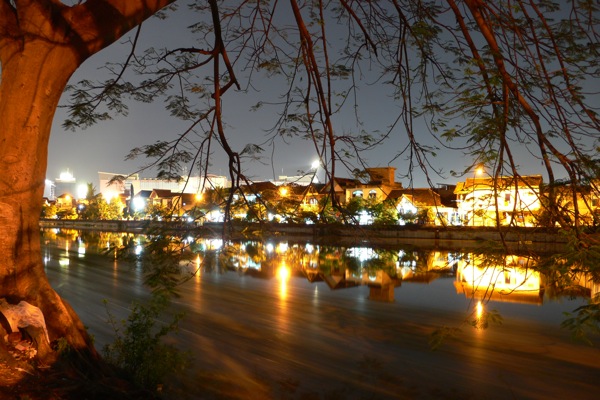 An English teacher in Surabaya, Indonesia shares an average day, from the prayer call to the nasi goreng.

For most Surabayans the day begins at 4:30 a.m. with the call to prayer beckoning them from their beds to the mosque. Indonesia is the largest Islamic country in the world, with 86 percent of the 243 million people calling themselves Muslims.

I don’t fall into this category and have become so accustomed to the call, that the neighborhood mosque’s song rarely wakes me. No, my day begins at least four hours later, with a 9 o’clock cup of kopi tubruk – coffee made from crushed coffee beans, sugar and boiling water – and a bowl of imported oatmeal.

After breakfast it’s time to rinse the morning sweat that has no doubt begun to form in this tropical climate – so I am out of the kitchen and into the bathroom for a mandi. The bathroom is completely covered in tile and for good reason – there is no bathtub, shower curtain, showerhead or hot water for that matter. However, there is a tile basin and a bucket… Ahh, the mandi – a scoop and splash process sure to wake me if my kopi tubruk hasn’t. If I am feeling particularly cold or squeamish, adding a large pot of boiling water takes the edge off.

Around noon, I join what feels like the majority of the 3.5 or so million city dwellers on their way to work, school or back to the mosque. I join not by car, bemo (small bus), becak (pedicab), or taxi, but by motorbike. Bring on the madness… The traffic lanes are worthless and the laws are only worth as much as the bribe you pay; but the effect of the friendly beep should not be underestimated – a small voice shouting, “I exist, don’t run me over!” amidst the honking crowd.

Surabayan youth were outraged at the Dutch and instigated the three-week Battle of Surabaya on November 10. Unfortunately, the Indonesians lost this battle but the effort marked a new stance on the independence issue, and November 10 is now celebrated as Heroes Day throughout all of Indonesia.

Upon arrival at my school I spend some time chatting with the staff and my fellow teachers before planning lessons. My co-worker, Greg, shares his latest Indonesian language revelation: malama, a word he created meaning ‘a long night,’ (malam translates to night, and lama to long time), I find it quite clever and the local teachers laugh but remain politely unimpressed.

Two o’clock rolls around and I get hungry for a lunch of gado-gado – a steamed vegetable salad (potato, cabbage, tofu and mung beans) served with a heavenly peanut sauce prepared with a coconut milk base, and a boiled egg. 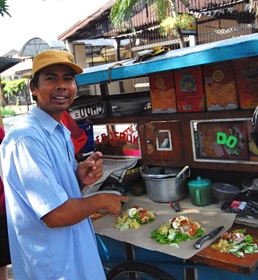 Pak (Mr) Frendy’s gado-gado cart is in the same place everyday, outside the mosque around the corner, and he knows my order by heart: no lontong (pressed rice patty) and easy on the peanut sauce. A two-minute walk and 6,000 rupiah later – around 75 US cents – and I’m set.

Finally the clock strikes three and it’s time to teach English – I spend the remainder of my working day fielding questions such as, “What’s the difference between bitch and biotch?” and drilling students to pronounce the ‘th’ sound as thhhh, rather than duh. (There are no stereotypically Asian pronunciation problems with r’s and l’s here, although interestingly most of the Balinese students confuse their p’s and f’s.)

The 9 o’clock drive home after work is much more relaxing than the drive to, the night hides the pollution and litter and the city parks are all brightly decorated with festive lights, earning the city its newest nick name: Sparkling Surabaya. We can kindly thank the tourism board for this. 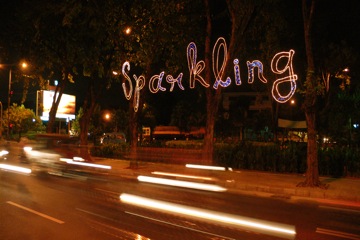 Around 9:30 p.m. I meet my husband at home, he with dinner in hand – nasi goreng (fried rice) from a particularly talented street vendor in our neighborhood, Pak Heru, who feeds us most nights when we are too tired to cook for ourselves. Dinner and the day’s amusing stories are then shared beside our courtyard garden, a few mosquitoes are swatted away, the mosque sings it’s final song and we eventually go to sleep, ready to start again tomorrow.

10 Things To Do in Surabaya, Indonesia