When I was a student living in London, I kept a running tab in my head of how much everything cost. A pint of beer for four pounds? That would be eight American dollars. A t-shirt from TopShop priced at forty quid? Maybe Kate Moss can afford 80 dollars for casual clothing, but I can’t.

Many people dream of living in Europe, but London, Vienna, and Paris come with high price tags. Luckily, Europe isn’t limited to these international capitals. I used Xpatulator, a website that publishes a list of 300 international cities and ranks them quarterly by cost of living, to find the seven least expensive cities in Europe. Thirteen different categories are compared, including the cost of food, housing, recreation, education, and medical care.

Hardship level measures how ‘difficult’ it is for an expat to live somewhere. Xpatulator describes it as “the relative difference a person and their family will experience and the relative impact on their lifestyle when moving between different locations.” A hardship level of 40% represents “extreme hardship.”

Once I narrowed down the list to the seven most affordable cities, I compiled information on currency, language, climate, hardship level, things that are cheap, corruption and some random, interesting facts. It’s no surprise that the seven least expensive international cities are all located in Eastern Europe.

Currency – Google
Language – Ethnologue
Weather – BBC World Weather
Hardship Level – Xpatulator
Things that are cheap – Xpatulator
Corruption – Transparency International, Perceived corruption levels are rated on a scale of 1 to 10, 10 being low corruption and 0 being the highest

Note that Americans who want to live in Europe will need a visa for their intended country. Go to the State Department’s website for country specific information. 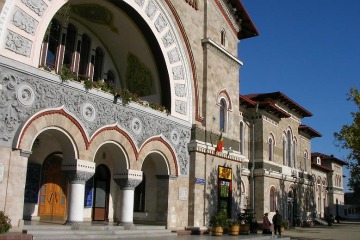 Currency: The Leu, with plans to convert to the Euro in 2010-2012
Language: Romanian
Weather: Hot, dry summers and mild winters
Hardship Level: 30%
Things that are cheap: Groceries, alcohol
Corruption: 2.9
Miscellaneous: With warm summers and mild winters, Moldova has ideal weather for growing grapes, which means excellent wine and a well-established wine industry. Jobs for foreigners may be difficult to find; it’s estimated that 25% of Moldovans work abroad.

Bucharest Expat is a good information source with over 2,000 active community members.

Currency: The Denar
Language: Macedonian and Gheg Albanian
Weather: Humid, subtropical climate with hot and wet summers. Winter months are equally wet and often snowy, though rarely freezing.
Hardship Level: 30%
Things that are cheap: Recreation, culture, and restaurants
Corruption: 4.1
Miscellaneous: Skopje is a mix of Christian and Islamic culture. A major earthquake in 1965 destroyed some of the historical architecture, but the city is being rebuilt with an emphasis on public parks and preservation of the remaining Ottoman architecture, including medieval hotels. 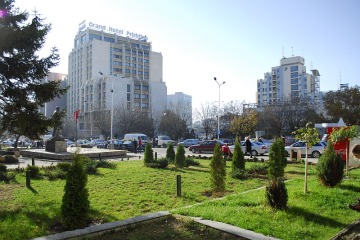 Currency: The Euro
Language: Gheg Albanian
Weather: A humid, continental climate with average summer temperatures in the 80s and snowy, mild winters
Hardship Level: 40%
Things that are cheap: Education and groceries
Corruption: 2.8
Miscellaneous: In the summer, locals spend as much time at outdoor cafes as possible. Cafe culture is as much about being seen as it is about drinking coffee. The streets are said to be safe after dark, even for single women.

For information on toddler play groups to women’s clubs in Pristina check out inyourpocket.com/kosovo.

Currency: The Bulgarian Lev
Language: Bulgarian
Weather: Because Sofia is located in a high valley, it has cooler temperatures than the rest of Bulgaria, with summer temperatures in the high 70s and winters in the mid 40s.
Hardship Level: 30%
Things that are cheap: Household costs like electricity, rent, and taxes
Corruption: 3.6
Miscellaneous: Sofia is one of the best locations on this list, bordering the Black Sea and Turkey. Expats consider it a “large small town,” easily walkable, with opportunities for rugby and outdoor activities. Sofia is a great jump-off point for skiing in the winter and hiking in the summer in Vitosha, a mountain town just south of the city.

For an expat’s guide to living in Sofia, try ExpatinBulgaria.com.

Currency: The Albanian Lek
Language: Tosk Albanian
Weather: Tirana has a Mediterranean climate with hot, dry summers and cool, wet winters.
Hardship Level: 40%
Things that are cheap: Groceries, healthcare and personal care
Corruption: 3.3
Miscellaneous: With daily power outages and no international train service, Tirana is not the easiest place to live. Tirana is an ideal place to learn Albanian as very little English is spoken.

Currency: The Marka
Language: Bosnian, Croatian, Serbian
Weather: Proximity to the Adriatic Sea keeps Sarajevo’s climate moderate with an average of 170 days of rainfall.
Hardship Level: 40%
Things that are cheap: Education and household costs
Corruption: 3.2
Miscellaneous: Described as a “little city or a big village,” Sarajevo is dealing with post-war reconstruction, political corruption and social instability.

Read one expat’s interview about daily life in Sarajevo.

If you’d like to live in Europe but don’t have the money to get there, check out Matador’s guide on How to Move to Paris With No Money.

The ultimate arts trip through Bucharest

20 travel experiences to have in Bucharest before you die