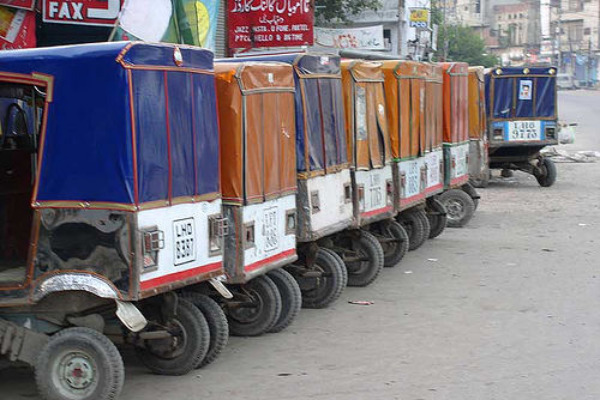 It’s a bit like traversing from calm to chaos and back again.

It’s 3:30 pm, and I am on my way past meticulously tended lawns, villa style fortress-like houses, and shiny SUVs sparkling under the fervent Punjabi sun. Servants leisurely pedal their bicycles or laze around puffing on hooka pipes. Turning left onto Ghazi Road, I notice there is enough room for two lanes so I can easily overtake slower vehicles. For a few seconds, I slacken my grip on the wheel.

Then I hit the speed bump and pass police toting AK-47s by the white barriers. Now my driving requires the full use of all my senses. I am leaving Defence, one of Lahore’s swankiest residential areas, and entering the “other” part of Ghazi Road. Although I’ve driven less than a mile, it’s as if I’ve driven into a different country.

The wide lanes of Defence narrow and tiny shops of all sorts line the streets. Crates of chickens stand waiting for customers as flies buzz around sample specimens proudly hung in shop windows. Boys on too-big bicycles awkwardly pedal alongside me while helmetless motorbikers are constantly whizzing by from every direction. 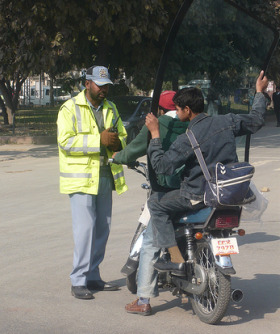 Motorbikes prove to be versatile contraptions. One carrying an air conditioner squeezes by, almost taking out a hobbling one-legged beggar in the process. I try to avoid a second motorbike transporting ten-foot lengths of metal piping. A third one almost topples over as it tries to pass me. It is carrying an entire family. The husband driving with a toddler at the handlebars, the pre-teenage daughter who’s still allowed to straddle the bike, the mother sitting sidesaddle draped in a burka, and a sleeping newborn on her lap.

Following rules is not what’s important here, making accommodations is. I swerve into the lane for oncoming traffic so as not to hit a large wooden fruit cart in my lane. The fruit vendor was pushing the eight-foot wide cart when he found a customer; he then stopped smack dab in the middle of traffic.

Although I’ve evaded the fruit cart, I’m now stuck behind a colorfully decorated bus. It swerves erratically to the left every few minutes to pick up more passengers, but just before I can pass it pulls back to the middle of road and hogs both lanes. “DO do DO do dO do dO do dO do dA!” The bus toots its funky musical horn and pulls over to pick up more passengers. There’s a crowd of at least ten people cramming in, so I take my opportunity and speed past.

As I near the intersection, I see no less than six donkey carts waiting in the queue to turn right onto Ferozepur Road. A gigantic mound of trash is being pulled along at what seems like less than one mile per hour by a tiny donkey. These carts are called tongas, and their drivers seem as if they’ve been transported via time travel from the fifteenth century. A weathered old man sits nonchalantly on one of the carts. Wrinkles betray the amount of hours he’s spent under the sun’s rays, and a tattered white turban tops his head. As he greets another tonga driver, he smiles a toothless grin.

I adjust my copious dupatta to cover me as I wait at the traffic light. In Defence, the dupatta is merely a fashion statement and can be nonchalantly thrown over the shoulder like a scarf, but in other area of the city it serves to shield me from lecherous eyes. Police man the intersection as loadshedding has shut down the electricity again. A man shoves his stub of an arm up against my window in an attempt to get some change. On the other side, a woman holding a sickly baby raps on the glass. Allah kay dua. Bacche ko dudh de de. I pray you, give the child milk. 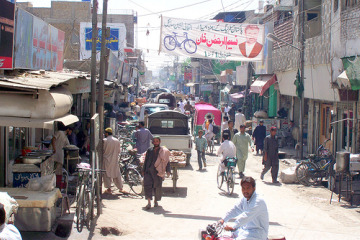 The smartly dressed policeman beckons that it’s our turn to move, but turning a corner along with six donkey carts is no easy feat. Vehicles behind me erupt into a chorus of horn tooting as the tongas block all lanes of traffic.

I get around them, and now I’m on Ferozepur Road, the longest road in Lahore. It used to go straight to Firozpur, in what is now the Indian Punjab. Bright green and blue auto rickshaws dart in and out of the traffic. The back of one rickshaw reads Ma ki dua, mother’s prayer. Thanks to mother’s prayers the man has a rickshaw to make his living. A minivan driver sticks his right hand out the window to let me know he’s going to cut across four lanes of traffic.

Behind me, a Honda City desperately flashes its high beams on and off as if there’s some emergency. The emergency is that I’m in the fast lane and the Honda wants me to get out its way. I look to my left and see the road crowded with motorbikes and rickshaws. “Yes, Mr. Bigshot. Where exactly would you like me to go in order to let Your Majesty pass?”

I’m not in any hurry to risk my life so that the Honda can speed past, so I do what I normally do; I stay in my lane and continue at a normal speed. If that self-centered driver wants to pass, he can dodge the rickshaws and motorbikes himself.

I turn into the service lane that leads to Ali Institute of Education. As usual, the barber is offering his street side shaving service. I turn right into the grounds and I am greeted with smiles from the guards. Water fountains, chirping birds, and rose gardens show me that I’ve left the chaos of the commute and arrived in another island of calm.

The digital clock reads 3:42 pm. It has taken me twelve minutes to get here.

Do you have a story to share about your way to work? Let us know how you get there, who you pass by, what you see and what it makes you think about. Please send submissions to heather@matadornetwork.com with “On My Way To Work” in the subject line.

6 ways to experience art and culture in Lahore, Pakistan

What NOT to do in Pakistan

Cooking in Lahore: An American woman in a Pakistani kitchen