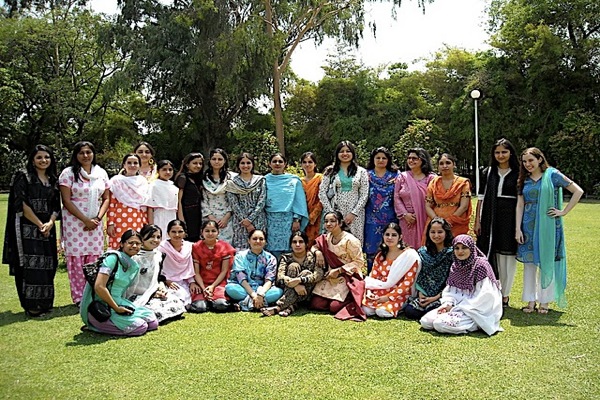 An American expat in Pakistan finds herself confronting the color of her skin everywhere she turns.

I suppress a cringe at being identified as the “white foreign woman.” Memsahib is my least favorite Urdu label. I’ve gotten somewhat used to the staring, the whispering of “Dekho! Ghori larki hai!” (Look! It’s a white girl!), and constantly being referred to as Angrez or British. I often surprise my admirers by cheekily responding to them in Urdu that I am not British, but am in fact American.

When someone refers to me as memsahib, I know they’re doing it to be polite, but it evokes an entire history of well to do British army officers’ wives palling around in exquisite drawing rooms in the mid 19th century. I don’t want to be called memsahib or ghori; I’d rather be referred to as a teacher or a writer or anything else that identifies me aside from the color of my skin.

I smile at the guard who called me memsahib while I count out change for the rickshaw driver. The guard raises his hand to his wrinkled forehead and offers me a salute. His hand is stiff to attention at his drab olive-colored felt beret, yet his eyes glisten with kindness. I offer a wave and a greeting in return as I make my way toward the college’s main building. 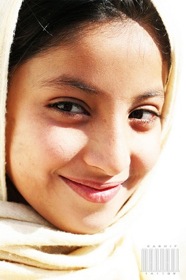 It is in Pakistan that I have had to come to grips with the inherent advantages and disadvantages of historical and cultural white privilege. Fair and Lovely beauty cream can be purchased at almost any roadside beauty shop, and every ladies’ beauty parlor offers multiple ways to whiten and lighten your skin tone.

For weddings, women use white powder and foundation to make themselves look lighter; the ones who overdo it end up looking like ghostly waifs in full bridal array. More than once when I asked an older woman about her daughter-in-law, the first thing she responded was, “She is very fair, not wheatish or dark-skinned.”

Because I am light-skinned, less educated locals often assume a lot of things about me. At first glance many see me as rich, educated, American and simultaneously a Christian and a loose woman.

A gaggle of men will surround me within seconds of emerging from a train, bus, taxi or rickshaw. “Ji, you want to buy carpets?” “How about some gold jewelry for a pretty lady?” “Taxi service to my brother’s hotel?” In addition to the typical touts, men try to grab me or brush up against me. 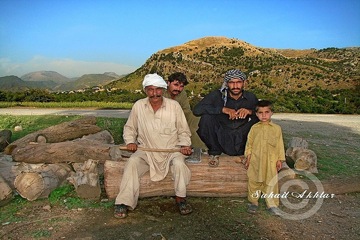 White women tend to be equated with prostitutes since most local men’s experience with white women is limited to pornography and Hollywood movies. “Eve-teasing,” as the Indian press terms it, is certainly not limited to white women; white women are just more likely to be targets of this popular pastime than local women.

Although being melanin deprived certainly has its disadvantages on the Indian subcontinent, there are also many privileges, or at least what are perceived to be privileges, granted to those who are fair skinned. Many times when a white person visits a local church in the Punjab, the ghora or ghori is garlanded with flowers and asked to stand in front of the congregation and greet everyone. The pastor may ask the foreigners to sit in the best seats, or even on the stage. Sometimes the white guest will be asked to preach with no prior notice consideration of whether said guest is a Christian or not.

I was offered several jobs just because of my foreignness, even though I was completely unqualified for the positions. Once I was asked to interview for a school principal job, even though I only had one year experience teaching in a K-12 school. Another time I was brought along to an advertising meeting. I thought I was going to meet up with some friends, and then suddenly I was being presented as a “foreign consultant.” My Portuguese husband was offered a position to teach college-level Spanish. He doesn’t even speak Spanish. 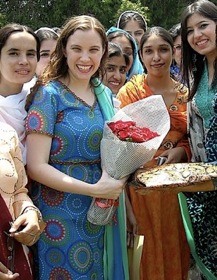 More often than not, we had to explain to locals why we were NOT the best people for the job. I spent an entire week persistently telling a local publisher in Lahore that I was not the person to write a complete K-8 English curriculum for Pakistani schools. The publisher’s response: “It’s okay, we just want your name on the front of the book, and a nice picture on the book cover. Find two or three other foreigners in America, and we can put their names on the cover as well. That’s the new trend; they don’t need to contribute. It just looks… nice.”

When I first arrived in Pakistan I was impressed with the hospitality of the locals, and I still am, although I am now wary of unsolicited hospitality and invitations. Being a memsahib can be tiring, especially during wedding season.

“Hello, Heather, are you free tonight?”

“It is the marriage ceremony of my second cousin from my uncle’s village. You must dress smart and come to the barat with me. Thik hai?”

When people I barely knew started inviting me to three-day wedding ceremonies of a distant cousin, I started to get the gist that certain individuals wanted the company of my skin color more than me.

I turn on the lights in the classroom and take out the teeming folder of papers to pass back during my creative writing seminar. Today is the last day of class, and I have not failed to dress smartly in a fashionable shalwar kameez. I know my students will have their cameras. Most have never taken a class with a foreigner before, and they’ll want photographic proof for their families and friends.

I know I’m white. I know people who see those pictures will refer to me as the ghori or the memsahib or the Angrez. I put on a fresh coat of lipstick and give in to being a novelty.

MatadorU is the most supportive, engaging, and innovative course for helping students accelerate their careers as travel writers and new media professionals. Join Us!

What did you think of this article?
Meh
Good
Awesome
Bookmark
Posted In
Culture Guides
Destinations
Pakistan

Pakistan and the road to Shangri La

How to confuse someone from Philly

How to humiliate yourself in a bar, according to a bartender