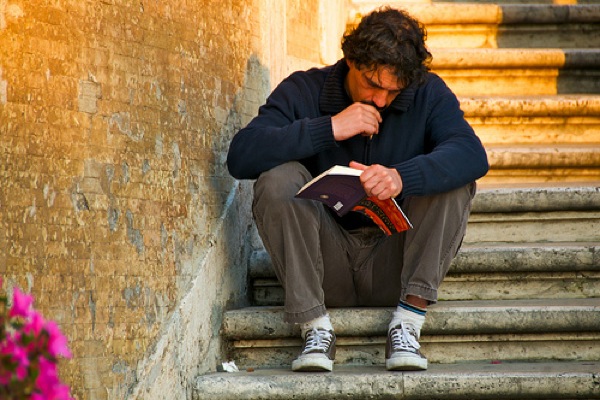 Once you can make yourself understood, you grasp the basics, and you feel comfortable, how do you keep advancing in a language?

I arrived in Cusco four months ago. After a month of classes, finding a local boyfriend, gradually saying goodbye to all of my English-speaking friends, holding a job that required me to speak and understand Spanish shouted over a blaring rock band and fighting my way through the intricacies of contracts and business plans in my second language, my Spanish improved faster than I’d ever hoped.

But for all this, for days passed entirely in Spanish, about a month ago I realized that I wasn’t rocketing upwards anymore. I’d plateaued. I suppose this is an entirely natural stage in the language learning process – when you are working from a broad base of knowledge, the chunks that you gain each day necessarily form a smaller percentage than they used to.

But I miss the rush of daily improvement, so these are the steps I’ve taken to bring my learning back up to speed:

I took my last Spanish class about two months ago and hadn’t glanced since at all those notes that have been uselessly clogging up my hard-drive. The knowledge was there, I figured, it was just a matter of practice, practice, practice.

But you can’t expect to continue to improve on something without a firm foundation, so each day I review a few topics, then hit the web to find as many exercises as I can. The result? Turns out I’ve been messing up the imperfect and preterit tenses again (and nobody bothered to correct me, see #6), but a quick review and a few hours of practice and I’m feeling good.

A fraction of the web’s free grammar practice offerings for Spanish learners:

* Trinity University, Texas has an good collection of Spanish grammar exercises
* Spanish Language and Culture with Barbara Kuczun Nelson is pretty and helpful, with four modules on the dreaded imperfect and preterite
* Study Spanish provides a fairly comprehensive amount of free material – you’ll need to join to gain access to anything beyond the preliminary grammar exercises, but the tutorials are quite informative and verb drills helpful if you’re struggling with conjugation

A quick Google search will turn up a wealth of resources for students of any language.

2. Dig out the flashcards

I’ve found myself reaching for a few words recently, gesturing frantically at objects that I’ve known the name of since early on in my Spanish learning, but that I don’t use much in daily conversation. It’s embarrassing and disheartening. I’ve worked too hard to acquire this vocabulary to let it slowly trickle through my fingers, so it’s back to the flashcards – five minutes a day, just to keep everything fresh.

A great, open-source program for flashcards is Anki. It keeps track of how easy or difficult each card was for you and spaces it out accordingly, letting get the most out of a minimal time commitment.

It’s perfect for building vocabulary and reinforcing grammar, and a great way to immerse yourself in the culture. Diving into the daily newspapers or the glossy magazines is good for the Spanish and for impressing local friends with your familiarity with current events and pop culture.

As for books, there’s such a wealth of incredible South American literature that I’m a little giddy every time I look at the growing collection of unread treasures on my bookshelf. Finishing Love in the Time of Cholera in its original and beautiful Spanish was a tremendously rewarding experience, and One Hundred Years of Solitude was one of the reasons I started to learn Spanish in the first place. My lovely commemorative edition sits by the bed, waiting until I have the free time to do it justice.

4. Flirt with another language

I used to think there simply wasn’t room in my brain for another language at the same time as Spanish, but language acquisition is a skill best developed through challenge and through taking a step back, looking at the overall shape and structure of a language, not always burying yourself in the nitty-gritty of tenses and sentence structure.

I’m playing with Portuguese at the moment, a half-hour or so on Rosetta Stone when I get the time, and the process of starting anew is helping me to see more clearly the patterns and logic of Spanish. It sharpens my language acquisition skills and keeps me interested and engaged in the process, while the inevitable comparisons and contrasts between two such similar languages reinforces my knowledge of Spanish while I’m learning something different.

I can read a book, hold a conversation, toss in street-cred-earning bits of slang. This was about as far as I hoped to reach when I started learning. I need something new to shoot for, something more than just a vague “to speak better”.

So I’ve set a few new goals, a few more stars to shoot for. Number One: a new and shiny exercise book on Advanced Business Spanish to be completed (and won’t it be a joyful day when I finally understand offhand all the jargon my accountant spits at me). Number Two the plan to sit for my DELE later this year, and all the frantic study that entails.

Now that I can communicate just fine, a lot of the helpful corrections from my circle of friends and the boyfriend have tailed off. I understand them, I’m able to get my point across rapidly and easily, and nobody wants to break the flow of the conversation to pick on my choice of tenses or mangled pronunciation.

So I’ve had to remind them all that I don’t just want to be understood, I want to be fluent – and how they hell did they all manage to let my blatant overuse of the imperfect tense slide?