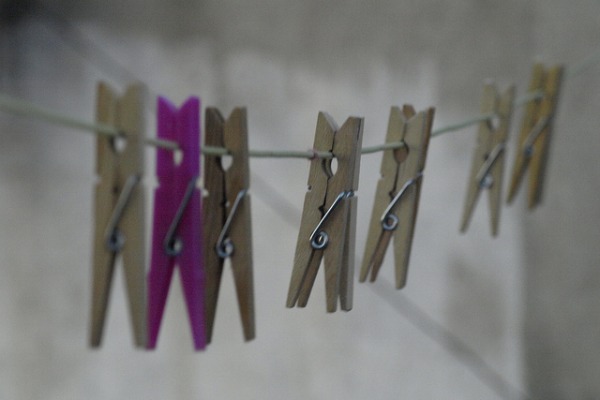 I hear Blanca and Antonio on the other side of the wall, whispering pillow talk in their indigenous language of Guaraní. My first thoughts are about how cold I am and I’m slightly irritated that I am awake at 4:30 in the morning. Then I hear a clap, Blanca’s first customer of the day, wanting to buy flour before the sun comes up. Soon, smoke from the breakfast fire will fill Blanca’s house, and my inability to breathe will force me out of bed and into the reality of living in rural Paraguay.

I had arrived by rental car to the community of Tavapy Dos,18 months ago with my American fiancé Chester, my dog Killer, and a slight feeling of panic under the surface. I wasn’t sure what my new life would be like, but I knew it would include latrines, language barriers, and laughter. Killer jumped out of the car first and was immediately welcomed with her first dogfight.

My instincts told me to pull the other dog off immediately, but I knew she had to learn to defend herself. She was dominated quickly and walked away with her tail between her legs; the only thing hurt was her ego. She looked at me as if to say, “That’s enough, are we going home now?” Sorry Killer, this is our new home. 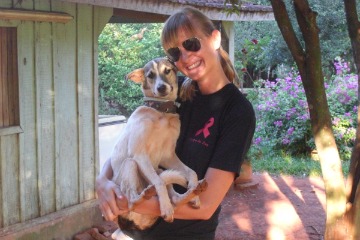 The author with her dog, Killer

“Good afternoon Megan!” Blanca called from her spot next to the fire. Antonio and Chester laugh. I smile and roll my eyes internally, how many times would I hear that joke? 6 o’ clock in the morning is hardly the afternoon.

I walk past them, making my way to the latrine in the corner of the yard, chickens and pigs scatter as I step around discarded bottles and piles of cow poop. I take a deep breath and go into the latrine, noting there is no roll of toilet paper. I hate using other people’s latrines. My own latrine, no problem, two people use it and I clean it regularly; sharing a latrine with eight other people is a foul business.

That taken care of, I join the others in a circle for a morning round of yerba mate. “What’s the plan today?” I ask Chester, yawning.

“I’m going to meet with the women’s committee to talk about building a factory for the tea business. Would you like to come?” He replies.

Before I can jump at the opportunity, Blanca interjects, “Doesn’t Chester have dirty clothes that need to be washed?”

I tuck my tail between my legs and go into the house to gather up Chester’s laundry.

“I actually don’t know,” I demur, shooting daggers with my eyes at Chester. Blanca loves Chester like a son, and accordingly, me like a daughter in-law. American gender roles and women’s lib mean nothing here.

“Who is the wife? I know he has dirty clothes.” Blanca chides, with a let’s-get-to-it tone in her voice.

I tuck my tail between my legs and go into the house to gather up Chester’s laundry. Blanca fills a bucket with soap and water while Chester lights a morning cigarette, the two of them chatter in Guaraní. I’m not sure what they’re saying to each other, something about the weather.

Blanca is the kind of woman who is always talking, always in motion. If there is no conversation she simply narrates what she is doing and thinking. She is constantly working: running her store, milking cows, grinding corn. Currently she is scrubbing Chester’s boxer shorts while simultaneously telling me how quickly Chester learned Guaraní. I had given up on reminding her that Chester arrived in the community a year before me.

She hands me his boxers to rinse and wring out before I hang them to dry on the barbwire fence. I look at Chester, and I imagine a world where he and Antonio wash my underwear while I smoke by the fire.

Megan wrote this piece as an assignment for MatadorU. Learn more about the craft of travel writing by becoming a student in Matador’s New Media School.

Tagged
Culture Paraguay
What did you think of this story?
Meh
Good
Awesome

In ‘In Her Shoes,’ a teen from Mumbai’s red-light area defines empowerment
By rejecting international students, will Trump ruin US universities?
30 awesome Japanese idioms we should start using in English
9 boardless, cardless games to play anywhere
21 amazing images of the new Seven Wonders of the World

8 reasons we should all pay more attention to this place

14 images of the real Paraguay

Landfill Harmonic: A story of creativity, hope, and endurance [Interview]

How I learned Guaraní in Paraguay