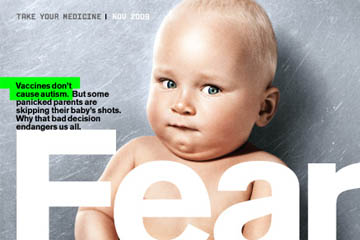 Chances are, you may know someone that has contracted swine flu. There’s also a good chance that they got sick, were laid out for a few days, and then got better (just like the regular flu season).

So why the global hysteria around getting the flu vaccine?

Everytime I turn on the news, the reporters are citing a new study that says H1N1 is even more potent than ever; in fact, it affects YOUNG HEALTHY ADULTS the worst! Public areas are plastered with signs shouting foreboding messages like “Take your life into your own hands. WASH THEM.”

Now, with the “second wave” of the flu season upon us, Obama declares H1N1 a national emergency.

It’s enough to scare everyone into being first in line for the flu vaccine. And that’s exactly what some people have done.

On Saturday, Oct 24, the Omaha News reported that:

Hundreds of people [stood] out in the cold, trying to avoid getting a cold. So many people showed up to get their shots, the clinic was forced to turn dozens away.

And yet…not everyone is buying into the flu shot. In fact, some polls say 48% of Canadians will not get the shot. In the USA, that number has climbed to 60%.

The Culture Of Fear

I’m one of the those Canadians who is suspicious of the flu shot. While I have nothing against vaccination, I find myself at odds with the H1N1 vaccine, likely stemming from a number of factors:

Sure, scary headlines sell newspapers and help their ailing bottom line. But even so, I’m suspicious of a hidden agenda when I see not one, but TWO cover stories on prominent magazines telling me I HAVE to get the flu shot or HUMANITY WILL PERISH.

Take the Wired issue this month. The cover features an innocent child with the word FEAR emblazoned above its head. The lead story is titled: An Epidemic of Fear: How Panicked Parents Skipping Shots Endangers Us All.

People are being bombarded by “on the one hand” and “on the other hand” studies and recommendations. “There is confusion,” says Dr. Sarah Kredentser, president of the College of Family Physicians of Canada. “And I think it’s warranted confusion, because the messages keep changing.”

I don’t consider myself a conspiracy theorist – which is why I’m not bothering to attribute the vaccine to some nefarious Illuminati plan to initiate a mass die-off before ushering in of the new world order.

Yet everytime I consider changing my mind and getting the shot, I’m hit with another demand to get the vaccine or face CERTAIN DEATH. And so, ironically, my resistance to rolling up my sleeve stems mainly from the frenzy created by public health officials and the media.

This is a huge blunder on their part, explains a Washington Post article from 2005, when the news was all about Avian Flu (remember that one?):

To promote vaccine use, many in the public health community have overstated the risk of flu-related death and the effectiveness of the vaccine in preventing it. While the flu vaccine may have some important benefit (less flu-related illness), we really do not know whether it reduces the risk of death.

The dangers of hyping fear are serious:

Public health officials should not exaggerate risks or benefits to promote vaccination. Exaggeration carries a price: Not only do some people get scared and engage in behaviors that increase their risk (like waiting in a crowded clinic for a flu shot). They may also grow cynical and end up ignoring health messages that really matter.

What do you think? Do you plan on getting the flu shot? Share your thoughts in the comments!

Tagged
Activism Culture Lifestyle
What did you think of this story?
Meh
Good
Awesome