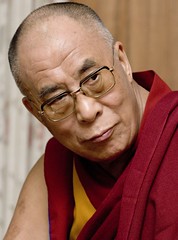 I write for a newspaper, says Dan Gardner, in so many words.

When I author, I am relevant and topical. My vocabulary is college-approved, my message fit to modern style. My insight and I share a desk in an office – bastion against the screaming ignorance of the pop mob.

If not for me and the degree in my holster, the tone is felt, come the Visigoths.

Making his rounds for the CanWest News Service, Dan attends a lecture in Ottawa given by the Dalai Lama. Though impressed by his “septuagenarian” (good word!) ability to pack ’em in like Hanna Montana, Gardner is let down by the lack of sophistication in the Dalai Lama’s message.

“He’s a wonderful old guy, but his words are platitudes on the level of Oprah or Deepak Chopra,” he later writes in his article Non-wisdom from the Dalai Lama

…I believe that the purpose of life is to be happy….
…We all come from our mother’s womb. Therefore we all have the same potential for compassion….
My main commitment is the concept of a happy life… much depends on having peace of mind.

What warrants the ticket price? wonders Dan. This man is supposed to be a fount of profundity; surely he can do better than:

Dan returns to his writing desk, locked and loaded by the non-event, fueled by the indignation of missing an episode of Heroes for such empty-headed tripe.

The Meaning of Words

It’s unfair of me to write this way. Mr. Gardner has no doubt earned his position and isn’t necessarily a fan of Heroes nor perhaps a literary cynic. He recognizes the meaning of words, though he astonishingly fails to see what meaning may issue from the person (or desk) who speaks (or writes) them. 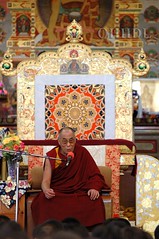 Gardner can’t be blamed entirely – no more than my classmate in high school, when she asked the instructor what good geometry was if not used in the “real world.” It was a reasonable though regrettable question, asked about a perceived circularity. What good is geometry?

Mr. Gardner’s job is to see through hype – and in the Dalai Lama’s audience, he saw plenty. He suspects the Dalai Lama’s distinction comes from a cult of personality: “fawning audiences that treat every grunt and guffaw as a shiny pearl dropped from the heavens.”

Excessive adulation isn’t pretty, particularly if you don’t understand the value of the celebrity: why Britney, why Brangelina, why Elvis or other such mythical creatures? What good are they?

“Good” can be a relative thing. The Arabs have a saying: “All sun makes a desert” – too much light makes the baby go blind, or perhaps too many clichés, or speaking too glibly.

But imagine a child who never learns to feed himself because his mother never let him go hungry. Imagine if my classmate wasn’t permitted to ask her question. Imagine if Mr. Gardner didn’t write his myopic poesy what I’d be doing with my time.

A Man of Peace

There must be more to the Dalai Lama than being a burr to the Chinese.

For me, he’s a defender of an endangered, spiritual culture whose homeland was taken by despotism. For me, he’s a man of peace who reaches across borders of nation, politic, religion and status. For me, he’s an imperfect man whose ideas are welcome against the constant blare of aggression and suffering. But this is what I bring with me.

If I demand brilliance or the kiss of destiny every time I break open a fortune cookie, I’d soon hate chow mein. How can I explain to someone why I still bother to read them, if they don’t understand how I value them?

Every experience is prefaced by one’s expectations. The difference between a traveler and one who travels: travelers know travel has nothing to do with where you go, but with how you go.

You can go to Paris and see nothing, if you assume Paris is only a matter of going to Paris. I can go to a party, yet have a miserable time; or be surrounded by wealth and accomplishment and resent every bit of it. The art is to find vehicles for your expression – limiting yourself to inflexible demands will prevent you from ever achieving fluency.

I wonder how many languages Mr. Gardner is able to communicate his ideas in, how verbose he and his thesaurus must be to express basic truths for pursuing contentment. I wonder if I myself overlook more delicate messages because they don’t make for good television in my culture.

I value his words not for their depth but precisely for their simplicity. I’m not interested in being overwhelmed, but invited.

Back to Britney. Her music isn’t for me. I base this on what I expect it to be; I’m free to do so. Am I wrong? Are her fans? Are they wrong because they like it, or am I wrong for expecting it to be more than it is? Is there, in truth, no gustibus for disputandum?

The Dalai Lama. I don’t demand that everything he says to be meaningful. I don’t consider his every thought a revelation, for he isn’t talking to me alone. Most importantly, where I differ with Mr. Gardner: I don’t believe his words banal because his role is so extraordinary.

I value his words not for their depth but precisely for their simplicity. I’m not interested in being overwhelmed, but invited.

Mr. Gardner expected the Dalai Lama’s lecture to change him and was disappointed.

His experience was passive: he arrived, but went no further. In our entertainment culture, we expect to be carried. It’s no surprise that Gardner confuses simplicity with simplistic, because he only went halfway. He merely attended.

The Most Important Truths

Beyond trite everyday existence is an underlying beauty of commonality, seen only by shedding trade values and recognizing inner meaning.

The most important truths are stripped of their gloss and prose. They’re not always clever, nor worthless for not being clever; they aren’t always fashionable or weighty or erudite.

Their value rests somewhere else, for words find definition in the dictionary, Mr. Gardner – they find meaning in the people who use them.

Every so often, Virginia again wonders aloud if there’s a Santa Claus. With luck, there’s a geometry teacher nearby with an answer why the “real” world is made so much broader by the power to make more of it “real.”

I once met a man who held a door open for me, and I thanked him. He replied, “In Tibet, we believe a word of thanks is a kind of prayer.”

I thought this a lovely sentiment. Not so deep, but lovely.

F. Daniel Harbecke (just call him Daniel, the F’s a family thing) is currently working on “A Philosophy of Travel,” which envisions travel as a metaphor for the meaningful experience of life. Daniel has lived in Europe, South America and Asia and is trying to fund his tony lifestyle in Sweet Home Chicago.
Tagged
Activism
What did you think of this story?
Meh
Good
Awesome

39 of the most breathtaking natural wonders in the world
Colorado’s new Palisade Plunge is the ultimate mountain bike mega-trail
For the perfect day of hiking and Colombian coffee, head to Jardín
The 11 World Surf Reserves have the most iconic waves on the planet
Woman finds guns, typewriter made of human teeth, and more behind locked door in Airbnb