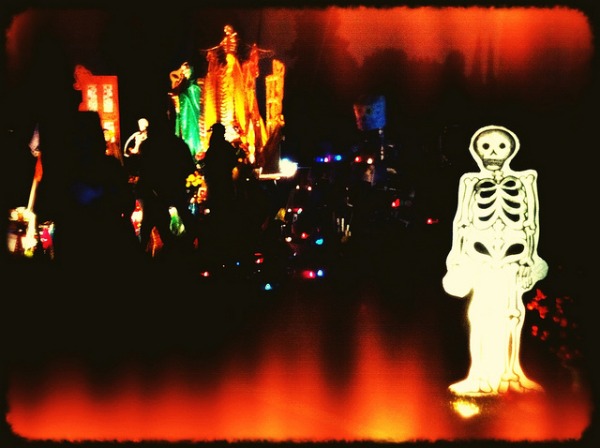 During the season of the dead, Christine Garvin uses ritual to try and understand a bit more where she came from.

When the woman leading the ritual explained her dad met her step-mom at ages 93 and 84 respectively, that they were like two teenagers who instantly fell madly in love, refusing to answer the front door when her sister stopped by because they were busy making love, I started to cry.

Much of the rest of the time, I stared at the picture of the two of them, him holding a martini with a mouth-wide-open grin, she leaning her head against his. I couldn’t stop contemplating finding real love then, that late.

But the rest of the pictures also spoke of the lives lived that came before, those we can only draw our conclusions about based on how they were captured in the photo, or a story passed down from a relative, or maybe even a faint memory from when we were five. There was some candy, a pencil with a heart shape at the top, no eraser. A twinkle in their eye. Sadness when the heart part of the pencil broke. Twice.

These pictures held no one from my family, from my background, but rather the families of those who surrounded me. Large frames, almost all black and white pictures, some seemingly an old Hollywood still shot. Hair curled and pinned. Chin resting lightly on hand. Glamour.

This is how we show respect to the dead, I thought. I just wish I had someone to respect that I had known.

Day of the Dead 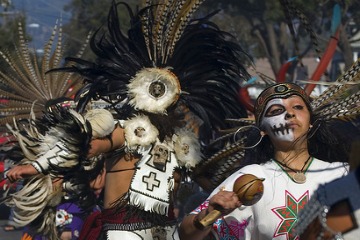 Dia de los Muertos, the day of the dead, gets what its due in Oakland. I remember the first time I went to the festival in 2002 in Fruitvale, the section in-between downtown and East Oakland, which holds a thriving Latino population.

I could say I’d heard of Dia de los Muertos before that, but I’d be lying. At that point, I’m not sure I’d even known or understood where Halloween had come from.

The colors, the masks, the skeletons, the flowers. The dancers. The idea that we not only remember those who have died, but we re-connect with them during this time, when the veil between worlds is at its thinnest. That spirits of those who have passed can rejoin their families for a few short moments.

This tradition comes from combined forces – the Aztecs and the Spanish, some say the Romans and the Celtics, too. Though Dia de los Muertos, Halloween, and Samhain are considered separate holidays, they essentially have the same point besides falling on similar dates: honoring death in a way that is hard for most of us to do most of the time.

Death is to be feared as the end in modern culture.

Death is to be feared as the end in modern culture. But most of our heritages looked at death in a very different way, that death and re-birth are simply part of the cycle of life, where one can bring as much joy and pain as the other.

Sometimes I think it’s easier to believe this is my only life, because then all the grinding and pushing and excessive amount of time on the computer and caffeine make sense. This is it! Gotta live it.

But as I recall the flowers and the skeletons that paraded by me on Fruitvale Ave., and think about those black and white photographs I stared at for an hour while chanting deeply and placing pork loin in a bowl, I slightly smile at the insanity I put myself through sometimes. It feels like something is smirking back at me. 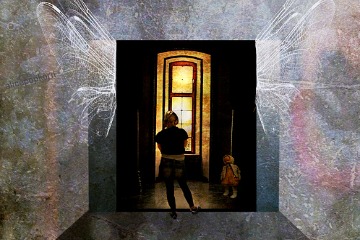 But there’s something about allowing in the dead without fear, for just a few, short moments. The only family trinket I had to add to the altar was my paternal grandmother’s necklace, one I wear quite often.

She had left it to me, along with all of her Avon jewelry, in a large brown jewelry box that I’m guessing she acquired around 1972. The box smelled of rose perfume and Dove soap and moth balls, the deepest connection I had to a woman who died when I was a sophomore in college. The necklace was the only thing I kept.

Maybe it was imagination. Maybe visualization. My mind just creating. But she arrived as I meditated, a young woman in her 20s, hair curled and pinned. Smiling. Glamour.

I asked why we didn’t know each other, when we had 19 years to get there. I asked why she pressed Catholicism on me, forcing the baptism on my parents, the Sunday School, the Confirmation. I asked why her and Grandpa had always had separate beds – had she ever enjoyed sex with him? With anyone else? How in the hell were we related?

Had she ever enjoyed sex with him? With anyone else?

She reminded me of the time I pushed for her to look at the back of the Sweet Valley High book I was reading. I was nine, or ten, even eleven. How I wanted her to see the word “sexy” printed in the middle of the book’s description, that this would show her I was a big girl, that we had something in common. She reminded me that this was my way because I saw her consume romance novel after romance novel the few, short times we were together.

I smiled back at her. Now I see how we were related.

Do you have any rituals for this time of year? Share them in the comments.

Tagged
Culture Spain Mexico
What did you think of this story?
Meh
Good
Awesome