JOSTLED BY CROWDS of international pilgrims and local Palestinian Christians, I was struck by the rich breadth of cultural expression — and the occasional elbow. Navigating the layers of religious and political tensions wasn’t easy. Jerusalem’s Old City was annexed by the state of Israel but is still considered “occupied Palestinian territory” under international law.

At times the only way through an Israeli checkpoint was to let the surging crowds of the faithful force me forward and hope for the best. By week’s end, dodging forests of Catholic crucifixes or getting splashed with Orthodox candle wax didn’t bring me closer to Jesus, but the devotion in the face of a Palestinian child, Brazilian teen, or Russian mother was truly inspiring. 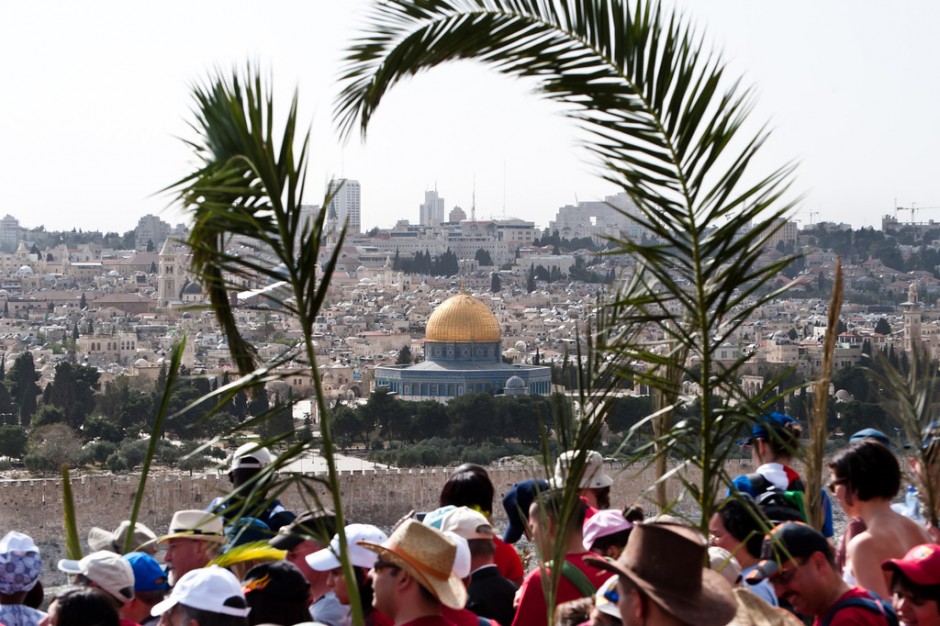 On Palm Sunday, a procession of Christian pilgrims carry palm branches from the Mount of Olives to the Old City of Jerusalem. 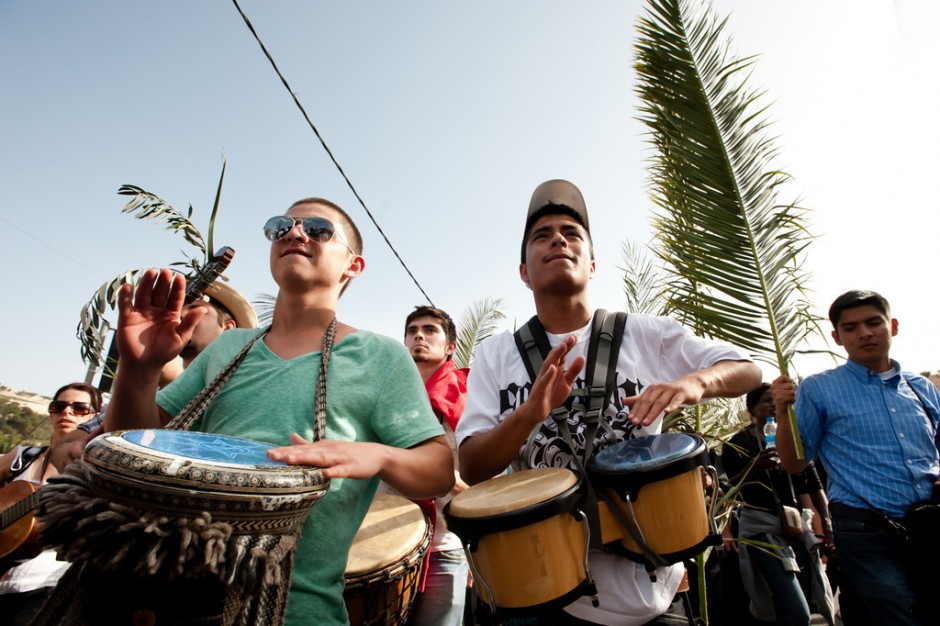 The Palm Sunday procession traces the traditional path of Jesus' "triumphal entry" into Jerusalem the week before his crucifixion. Here, Brazilian Christians beat out festive rhythms for the march. 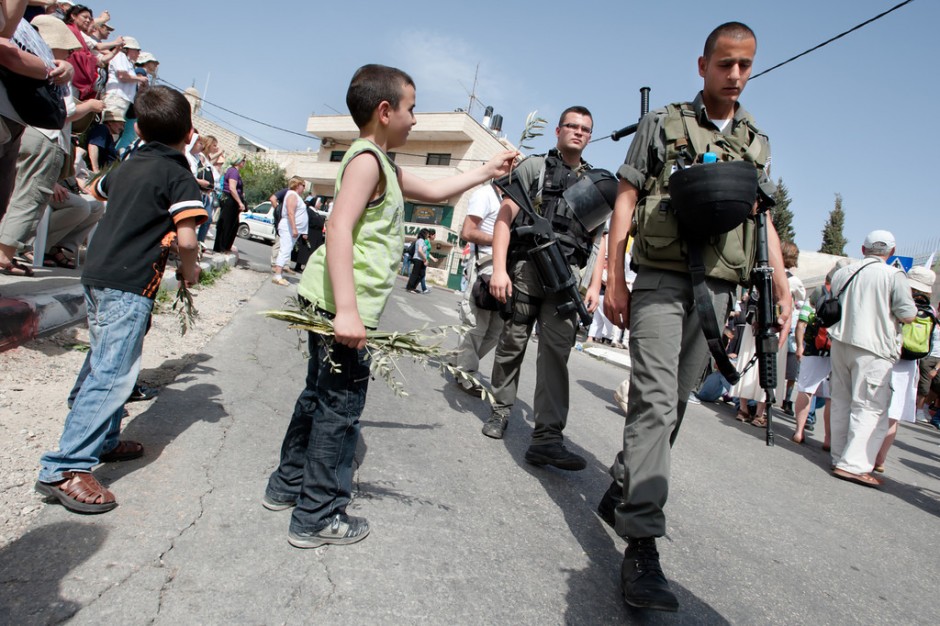 At the time of Christ, Jerusalem was under Roman occupation. Now, heavily armed Israeli soldiers control East Jerusalem, which contains both the Mount of Olives and the Old City. Here, a Palestinian boy offers an olive branch. 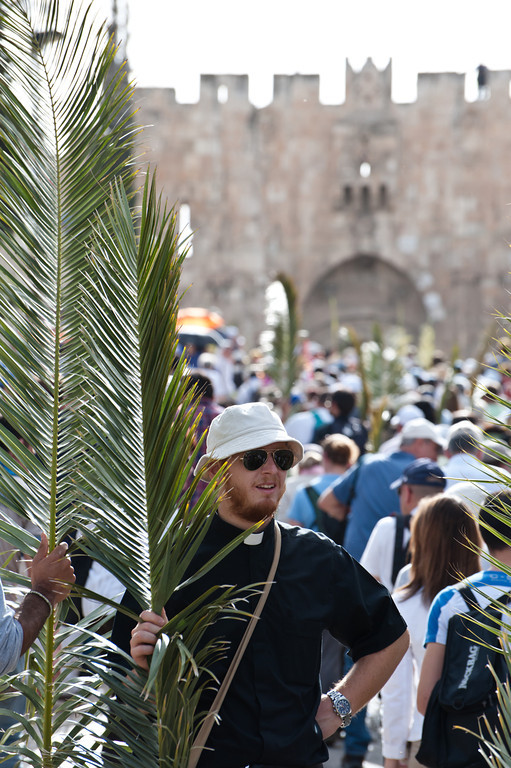 A priest stands among the multitudes as they pass through Lion's Gate into the Old City of Jerusalem. 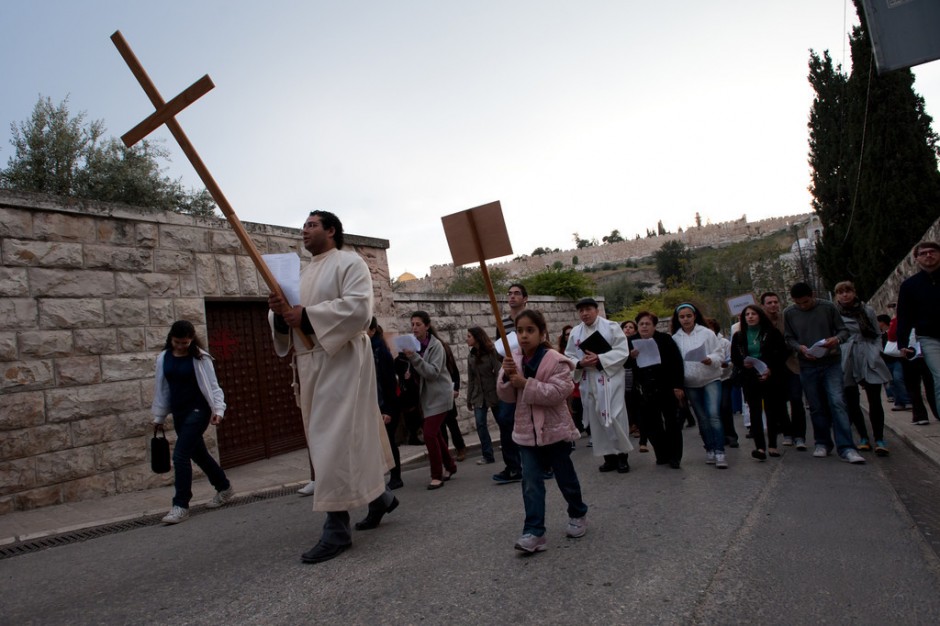 Once, most Holy Week pilgrims were local Christians with a smattering of internationals. Now, with movement restrictions imposed by Israel, the trend is reversed. Though some Palestinian Christians living outside of Jerusalem are given special permits to enter, many more are denied access. Here, Palestinian Lutherans lead a Maundy Thursday procession to the Garden of Gethsemane. 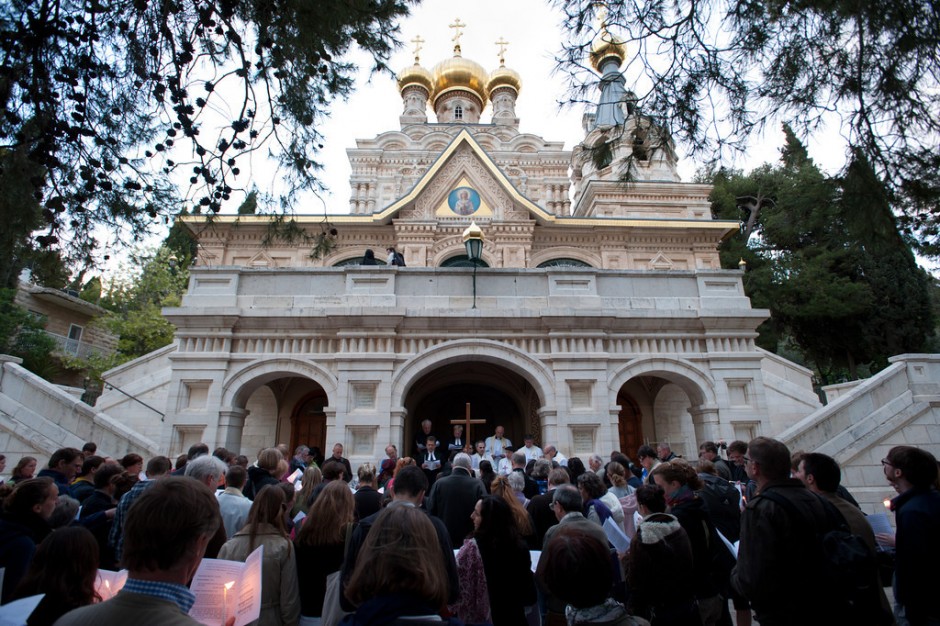 Maundy Thursday marks the night that Jesus was betrayed and arrested before his crucifixion on Good Friday. Here, believers gather for prayer in the Garden of Gethsemane at the gold-domed Church of Mary Magdalene. 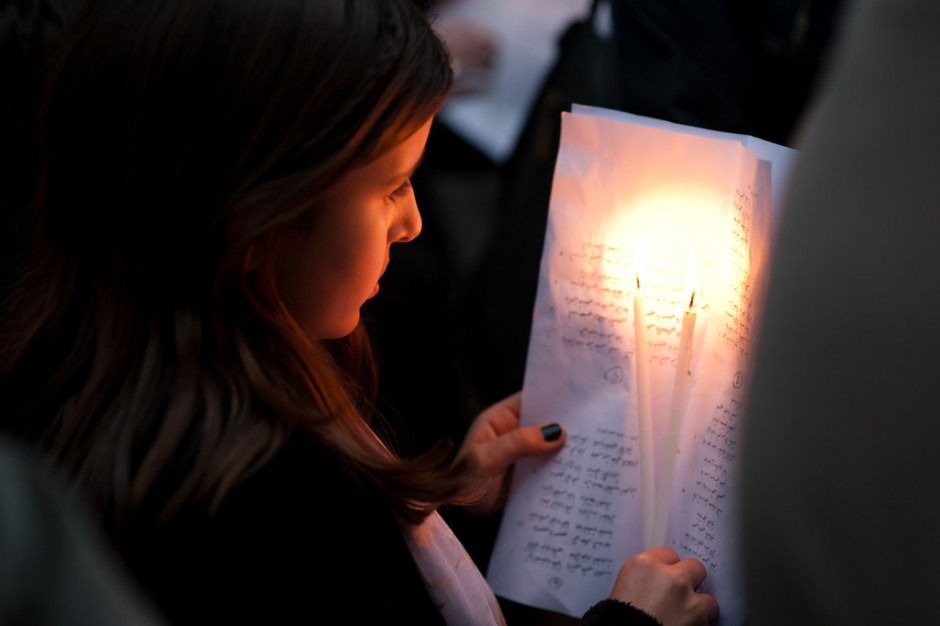 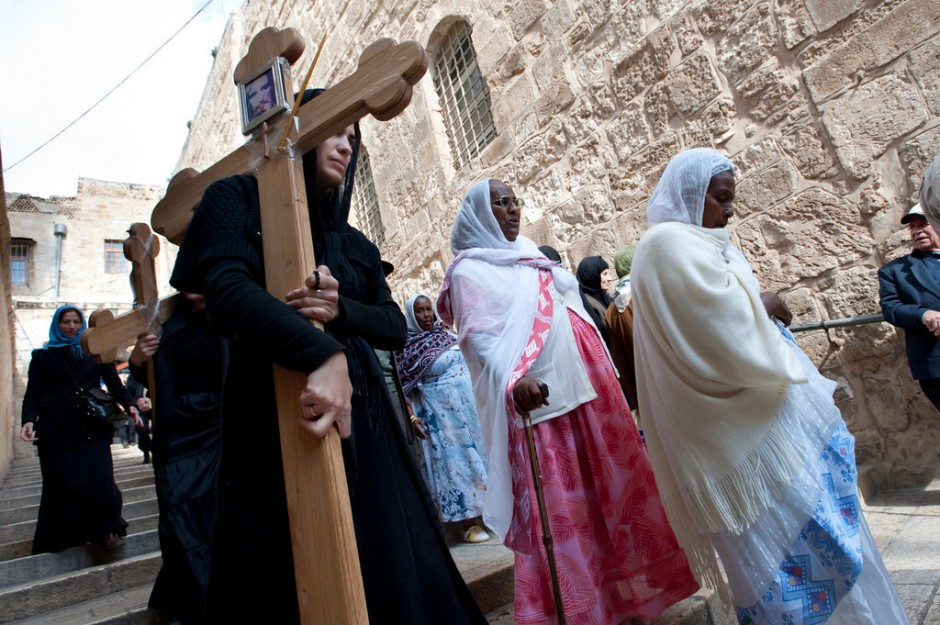 On the morning of Good Friday, the day Christ was crucified, pilgrims from many nations fill the streets of Jerusalem's Old CIty. 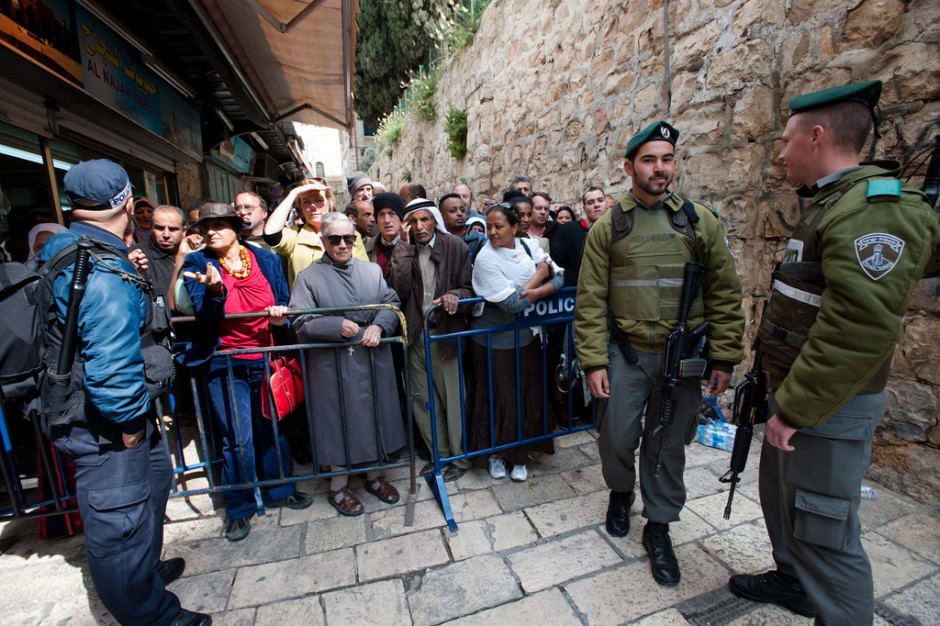 In the midst of the Good Friday crush, locals, tourists, and pilgrims face various checkpoints and barriers that Israeli forces open and close at unpredictable intervals. 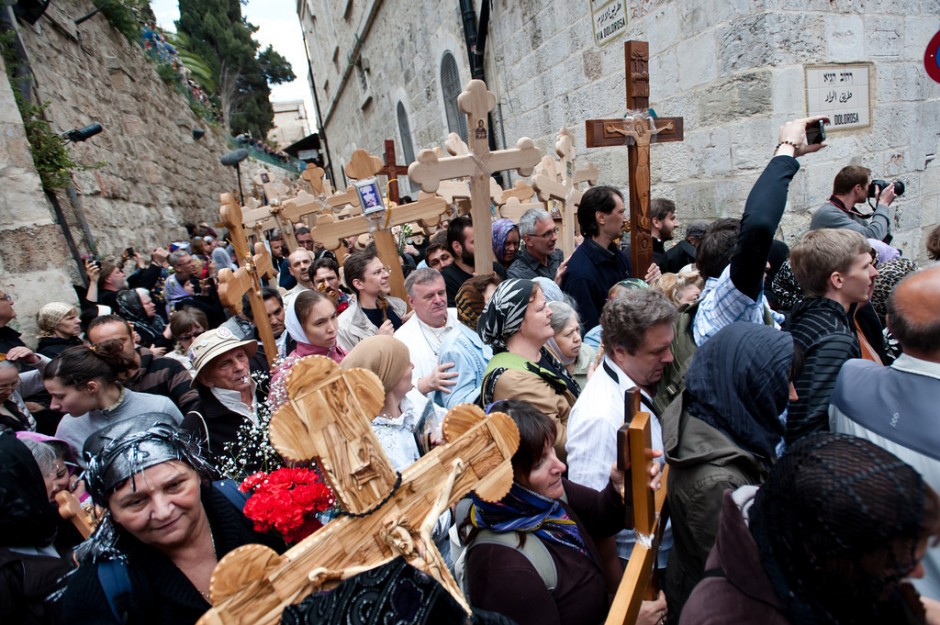 The Via Dolorosa, the traditional path that Jesus carried his cross to the crucifixion, is filled by throngs of pilgrims from many Christian denominations. 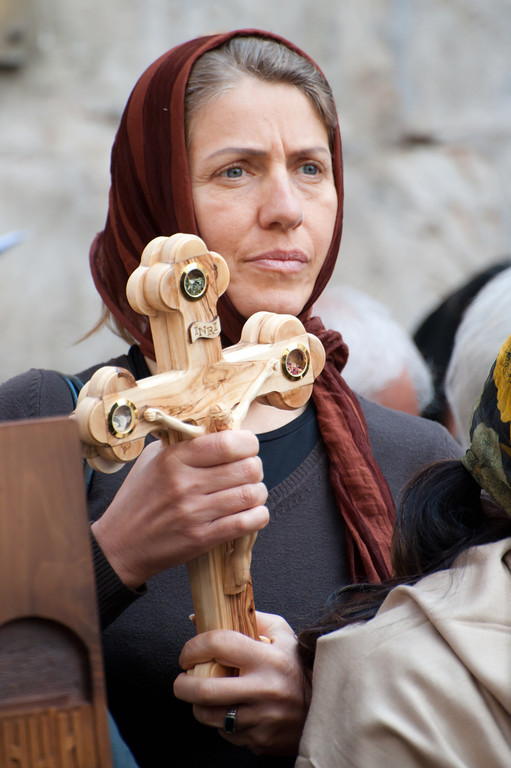 A Russian Orthodox pilgrim clutches a crucifix while walking the Via Dolorosa. 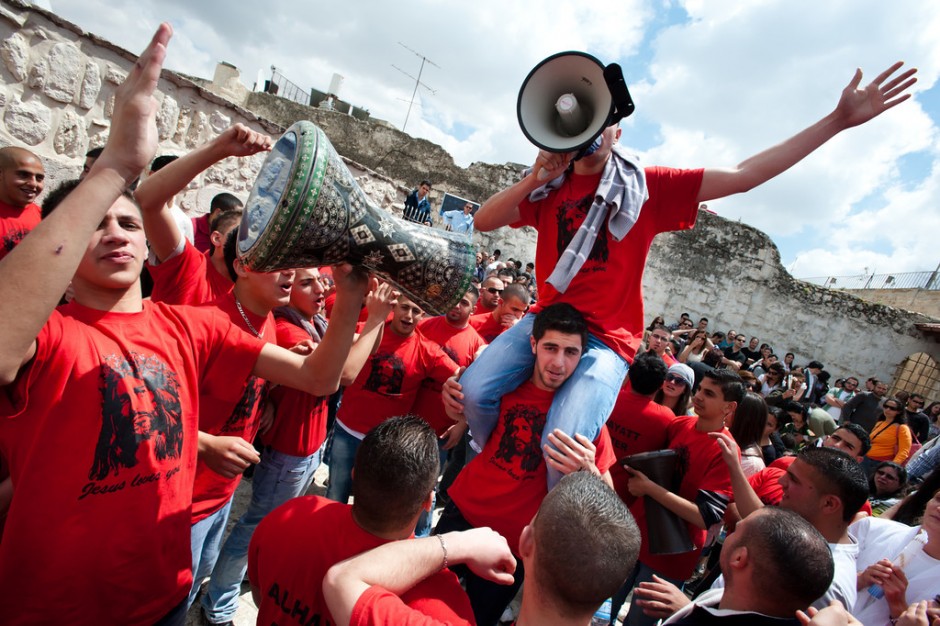 On Holy Saturday, the day before Easter, Palestinian Christian youth wearing Jesus t-shirts chant and sing in the streets of Jerusalem. 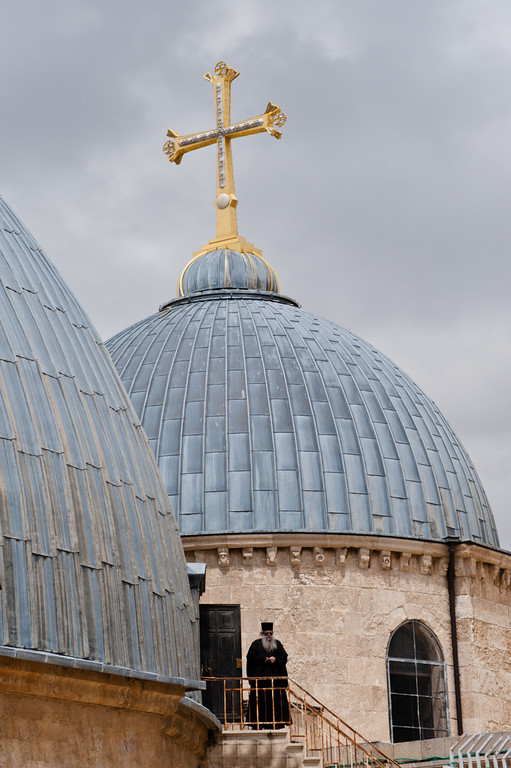 Church of the Holy Sepulcher

An Orthodox priest stands near the domes of the Church of the Holy Sepulcher, the traditional site of Jesus' crucifixion and resurrection. 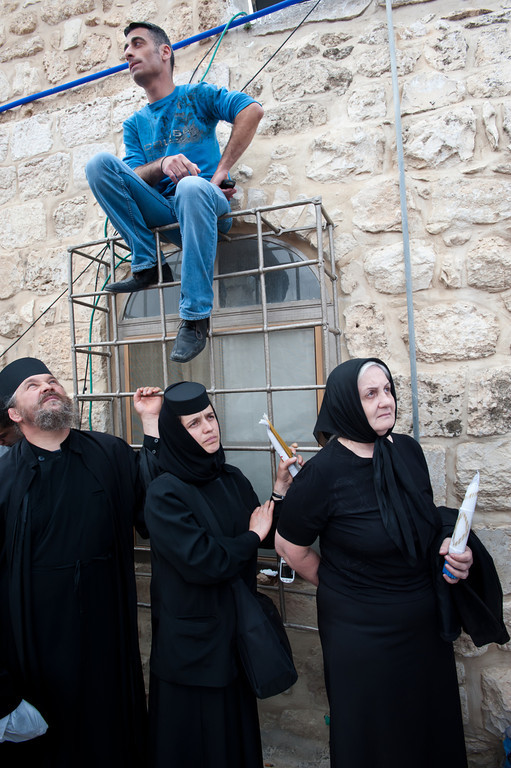 While a Palestinian Christian perches for a better view, international pilgrims hold candles in anticipation of the Holy Fire ritual, where a flame originating in the Church of the Holy Sepulcher is spread among the crowds gathered in surrounding streets. 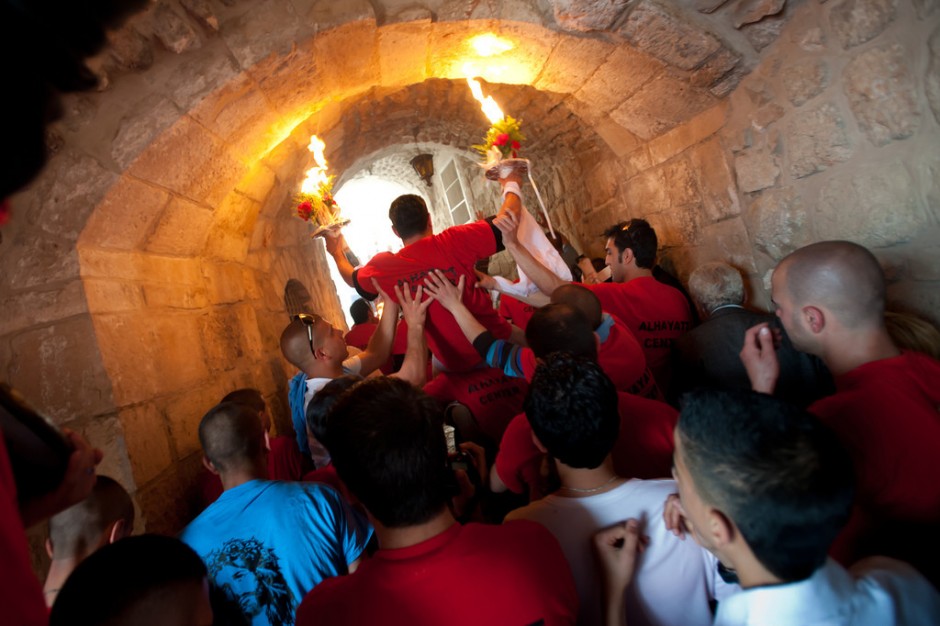 With candles lit during the Holy Fire ritual, Palestinian Christian youth surge through Jerusalem's streets in celebration the day before Easter. 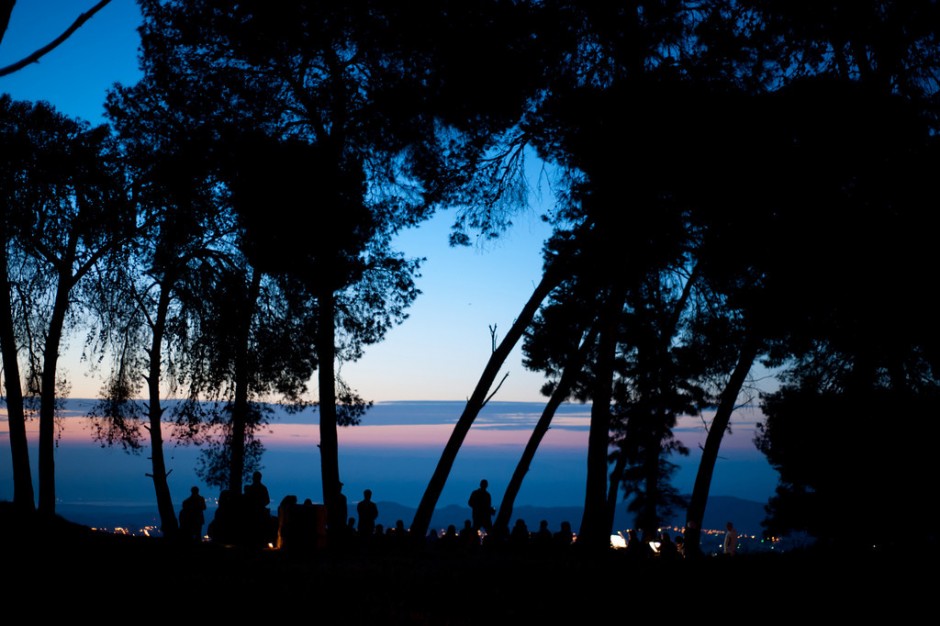 In the early twilight of Easter morning, worshippers gather for a sunrise service on the Mount of Olives. 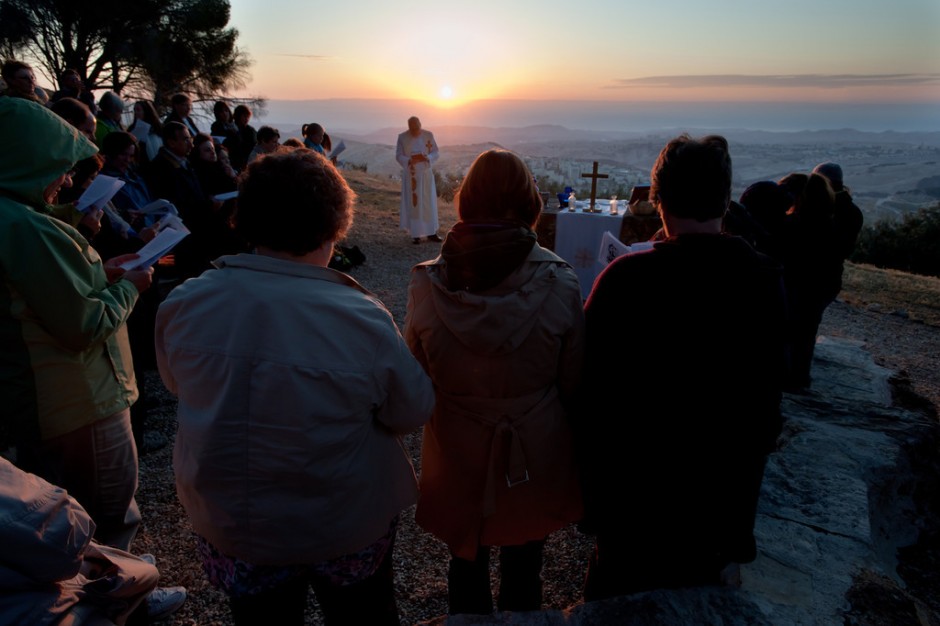 Sunrise over the Jordan Valley

As the sun rises over the Jordan Valley, those assembled celebrate Christ's resurrection on Easter morning.

Attending a Bris in Jerusalem

With the Women of the Wall