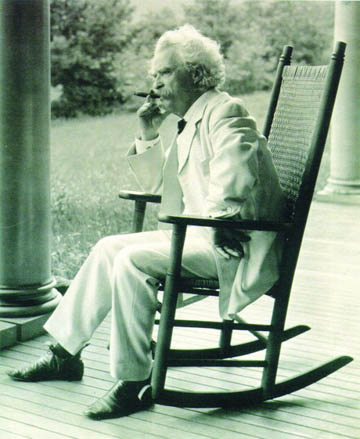 Mark Twain enjoying a cigar on the porch.

Good sex can distract you from a relationship’s deeper problems.

The same principle applies to books. A good plot is like good sex – it can distract you from the sort of sloppy, dispassionate writing that some people refer to as “bestsellers.”

Take Mark Twain’s A Tramp Abroad (1880). The book meanders alongside Twain and his “agent,” Harris, during their walking tour through Europe.

A Tramp Abroad was a bestseller in its time, and most of its charm still translates into this century. But beware: there’s no plot to save you from the bits you won’t like. The good news is that it won’t matter.

Mark Twain was an expert at darkly sarcastic satire, an adept nature writer, and a man who knew how to wear a mustache.

Born Samuel L. Clements in Missouri when it was a slave state, in America when Rutherford B. Hayes was president, and in a time when it was normal for half of your family to drop dead before ever reaching the age of 11, it’s no wonder that Mark Twain ended up with his sense of humor.

The real wonder is that he managed to find anything funny at all. Not because the state of things was worse then than it is now, but because Twain noticed things-he had a keen eye for injustice, stupidity, and the story going on behind the velvet curtain, and he knew how to use humor to show these things to others.

Unfortunately for his readers, he was also a man who knew how to write dull, tangential passages and to get paid by the word for them. (If only we could all be so lucky.)

But Twain’s lazy alter-ego probably won’t mind if you just doze off during the inconsequential miles between witty quips and mock epics. Just make sure you wake up in good time to take in the best scenery – the funny bits, the morbid bits, and the paragraph about ants.

A Book For The Road

A Tramp Abroad was a bestseller in its time, and most of its charm still translates into this century.

I recommend reading A Tramp Abroad while on the road, or after you’ve gotten home from traveling in Europe.

If you read it beforehand, most of the jokes will lose their punch, and you might end up taking his sarcasm too seriously.

The meticulous footnotes contain a lot of interesting historical information, but for the most part A Tramp Abroad is best for a good conspiratorial laugh. For the travel writer, it’s a living textbook on how to write satirically.

Heresy has it that A Tramp Abroad is Twain’s funniest work, and I heartily agree. Check out these tongue-in-cheek gems:

On Italians: “We have the notion in our country that Italians never do heavy work at all, but confine themselves to the lighter arts, like organ-grinding, operatic singing, and assassination.” (79)

On European Food: “A man accustomed to American food and American domestic cookery would not starve to death suddenly in Europe; but I think he would gradually waste away, and eventually die.”

Mark Twain also wrote two other well-known travelogues-Roughing It, which covers Twain’s journey to Nevada and subsequent life there, and The Innocents Abroad, which describes Twain’s trip through Europe and the Holy Land aboard a pleasure cruiser.

These books, along with A Tramp Abroad, are often unofficially lumped into a sort of trilogy, allowing entrepreneurial booksellers to sell them as a box set.

You, however, can download all three books for free from the Gutenberg Project.

What can traveler’s today learn from A Tramp Abroad? If you’re too busy to put in the reading effort, I’ll save you some time.

And always send someone in your place if it sounds dangerous.

Have your read A Tramp Abroad? Share your thoughts in the comments!