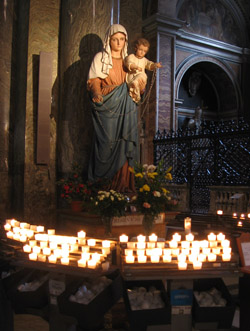 Churches, temples, mosques, synagogues – whatever faith they belong to, and wherever they are in the world, these holy places almost always make it onto the tourist’s itinerary.

We come out of curiosity about another country’s religious traditions, or to see the incredible artistic and architectural creations, or simply to soak in that solemn, reverential vibe so strikingly absent from almost all other aspects of modern life.

And therein lies the dilemma: if enough of us stampede into holy places, won’t it be destroyed by our chit-chatting, camera-clicking presence? Well, not necessarily. Or at least, not entirely.

Here are a few reminders to help you minimize your impact – to reduce your tourist footprint – while you travel to the holy places of the world.

If you’re heading to a predominantly Hindu country, why not brush up on the basic tenets of the religion? I’m not suggesting that you memorize all the various deities involved, or learn to recite the Ramayana, but some basic background shouldn’t be hard to acquire.

Knowing what’s going on around you will not only enhance your experience; it will make you much less likely to spoil someone else’s visit, or worse, offend a local worshiper. And it will save you the embarrassment of showing up in Prague’s historic Jewish district on a Saturday, because you’ll already know that the synagogues are closed to the public then.

This applies not only to those “exotic” eastern religions like Daoism or Buddhism, but also to those that may be more familiar to you. Isn’t it about time you found out why the Eastern Orthodox churches broke with Rome almost a millennium ago? Or brushed up on the major points of disagreement between the Church of England and Scottish Presbyterianism?

Religious history, all too often, is not much different from political history, and it’s worth knowing a bit about it before you start your trip.

What To Wear, What Not To Wear 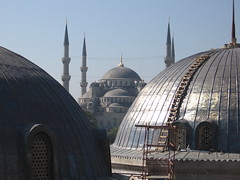 One thing every major religion has in common is an aversion to scantily-clad mortals in its houses of worship. For guys, shorts are almost always a no-no, and for girls, short skirts and cleavage are equally taboo.

Visible shoulders and under-arms are often frowned upon also, so regardless of your gender, always travel with at least one pair of long pants (or a long, loose-fitting skirt) and a shirt that covers at least your upper arms.

Beyond those general rules, each religion has its own strictures, whether it be a ban on leather in a Jain temple, or a woman’s hair being covered in a mosque. These specifics are normally clearly signed, and most places that require extra covering (such as a headscarf) will provide them.

Even if there is no one physically enforcing the dress code, always observe it. You are visiting by choice; if you have a personal or philosophical objection to clothing restrictions you are more than welcome to boycott the institution in question.

Of course, as tourists we always want to take photos. (What’s the point of visiting a famous landmark if you can’t take a million photos to post on Facebook later, right?) Often, though, the caretakers of the church or temple you are visiting will have decided that clicking, flashing cameras – and the contortions involved in getting that perfect shot – are not suitable for a holy building. 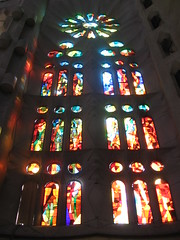 Photography, along with ticket booths, can detract from the spiritual nature of a place, so in these latter cases, the caretakers are attempting to preserve the original purpose of the building even at the expense of some lost revenue. Respect their decision by treating the building as what it is – a spiritual haven for many people – and not as a made-for-tourists hotspot.

If there is no sign, don’t assume photography is allowed – ask someone. Even if it is allowed, they will appreciate your concern.

Additional charges for photography, in places that already charge for admission, may seem like a money grab. But I’ve seen these additional charges in the poorer areas of Asia or Eastern Europe – which means they add up to a few extra pennies for the average visitor. Pay up. After all, how much support do you think the government of India can really afford to give its thousands (or millions) of temples?

Leave Your Politics At Home, But Pack Your Common Sense

Got a beef with the Catholic Church because of their stance on condom use in an HIV-positive era? Fine. Write a letter, attend a rally, post a video on YouTube, but don’t take your anger out on your fellow visitors to St. Peters or the Vatican Museums.

There is a time and a place for political gestures – and frankly, just by paying admission you’re undermining any point you may be trying to make once you’re inside. Dress codes vary, photography rules come and go, but the bottom line when you are visiting these holy places is to remember that they are very, very important to some of your fellow human beings.

You may not share their faith, you may even disagree with it strongly, but if you are going to visit a house of worship the least you can do is show respect. That means not hopping the barrier to strike a faux-pious pose next to the altar. It means turning your cell phone off, and keeping your voice down while you’re admiring the artwork. It means staying in your seat if you’ve decided to save a few dollars by attending a service instead of visiting as a tourist.

Most of all, it means opening your eyes, reading the signs, asking questions, and doing your best to make your visit as unobtrusive as possible.

Eva Holland is a historical researcher and freelance writer based in Ottawa, Canada. She is a blogger for World Hum and for Rolf Potts’ Vagablogging, and her travel writing has appeared in The Ottawa Citizen, The Edmonton Journal, and Matador Travel.

Canadian Mounted Police fined seven US visitors $1,200 for hiking in Banff These destinations are opening to US tourists this summer The oldest city in every state, mapped For the perfect day of hiking and Colombian coffee, head to Jardín Celebrate this Fourth of July like the first Americans
✖
travelstoke
Download the mobile app
stoked by