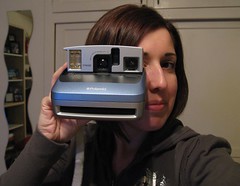 Sometimes during the summer months I do a few of the sidewalk art shows near where I live.

This gives me a chance to sell a few photos and chit-chat with the general public. I rarely sell much, but I have a lot of fun. Invariably, some of the passers-by will inquire as to what type of camera I use.

My usual reply is that I have a middle-of-the-line point and shoot. That satisfies about half of the inquirers. The rest, of course, need to know brand, make and model and all the other technical ins and outs of my digital shadow catcher.

Sometimes, I wonder if maybe I should have taken up painting instead, so that I wouldn’t have to entertain all those silly questions!

In my bag of tricks at these sidewalk art shows, I usually have a few small 5 X 7 photographs that I made with one of those Kodak FunSaver cameras. That usually gets the subject away from the technical end of the spectrum, and back to the nitty-gritty of photography as a creative process.

For someone who is not familiar with the Kodak Funsaver, it is a one-time-use camera. One camera costs less than ten dollars, and is nothing more than a bright yellow cardboard box with a plastic lens, a very simple film-advance mechanism and 24-exposures of Kodak negative film.

After you expose the film, you take the camera to a photo lab. They process the film, make some prints for you and send the box camera back to Kodak, where it gets reused.

Thanks to the sensitive nature of Kodak color-negative film the camera gives you decent pictures under most daylight conditions.

Nothing could be better suited in helping someone understand the fundamentals of composing a good picture than shooting with a Funsaver.

Nothing could be better suited in helping someone understand the fundamentals of composing a good picture than shooting with a Funsaver.

By using this primitive camera, everything is stripped down to bare basics, and you are forced to work from the ground up in building your picture.

After a few outings with this camera, you will learn to search more for a picture. No close-up view, no telephoto – now you must gaze at every possible image in a different way.

Maybe you need to move farther to the right or maybe closer to the subject. Perhaps there are interesting clouds in the sky and you will concentrate on that area, just leaving a thin skyline of trees or buildings at the bottom.

Or you could go in the other direction and leave the sky out completely. Since the lens is equivalent to a slight wide-angle, chances are you will be moving closer to your subject.

The possibilities are endless. You will learn a great deal about searching for a good photo. A teacher could not give you better advice. 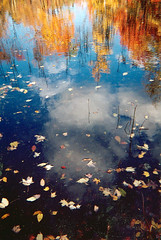 You don’t have to use a returnable camera to get back to the basics.

You might want to try a Polaroid Camera or a pinhole, or even a Diana camera, which is so popular with the fine art people. The results will probably be along the same line. Try one for a few days, a few weeks or even a few months and record the change of seasons.

Another lesson, learned from these cameras, is to shoot less. That way each picture is more valuable and you will spend more time planning the composition, the angle and lighting.

Digital has taught us that we can shoot huge amounts of high quality pictures, delete what we do not like and then go back and shoot a whole bunch more. Some of the more advanced modern cameras even have a system where you can knock off ten or more shots back to back like a machine gun.

Now put that aside and go back to a system where you might have only a dozen or fewer pictures that you can make in one day.

That limitation changes everything. It forces you to look at the visual world longer and with a more discerning eye – which is just what you should be doing anyway.

Shooting people with a basic camera is easier too. Who’s going to turn down a Funsaver portrait?

The subject might drop his guard a little once he know his face won’t be appearing on the front page of the National Enquirer or the Village Voice. Besides, the color print film is made to render good skin tones, so you cannot go wrong in that regard.

So if your travels take you to the French Riviera or the streets of London and you come across someone wandering around with a bright yellow box in his hand, smile!

Do you have any tips for using basic cameras? Share in the comments!

Henri Bauholz studied color photography at Syracuse University and has had numerous gallery shows in Louisiana and Texas. Now living in Maine, he writers part-time and blogs at ZenLoonatic.
What did you think of this article?
Meh
Good
Awesome
Bookmark
Posted In
Photo + Video + Film